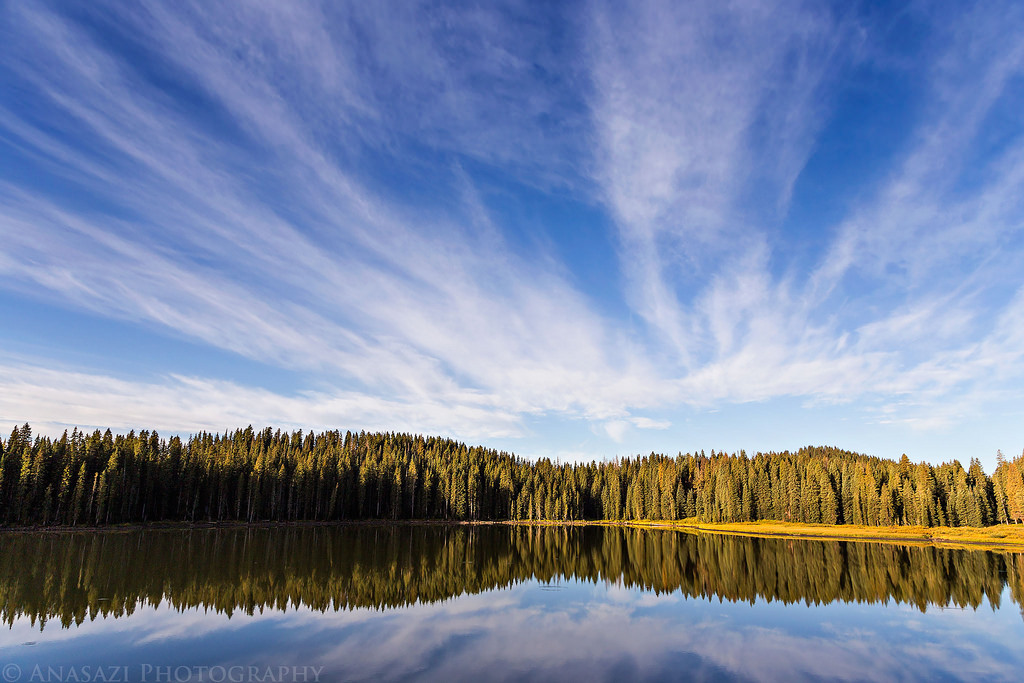 I woke up early and left my house well before sunrise to drive up onto the Grand Mesa. It was nice to watch the sun come up as I drove and there were some nice clouds in the sky reflecting off the many lakes and reservoirs that I passed along the way.

Nice clouds above a small lake along the Grand Mesa Scenic and Historic Byway. 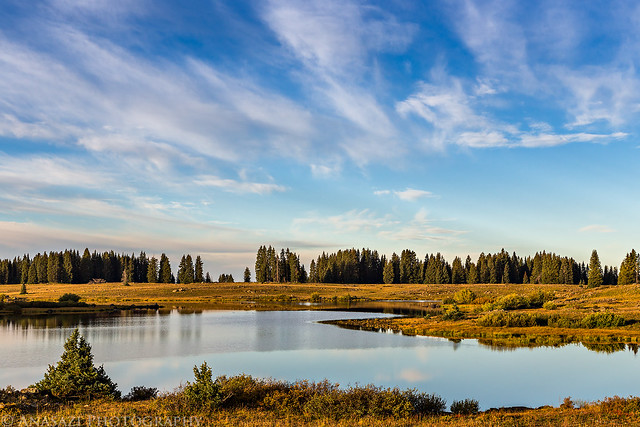 As I drove along the highway past the Crag Crest, I spotted this patch of aspen trees growing out of the boulders that were starting to turn yellow already. Fall colors are almost here! 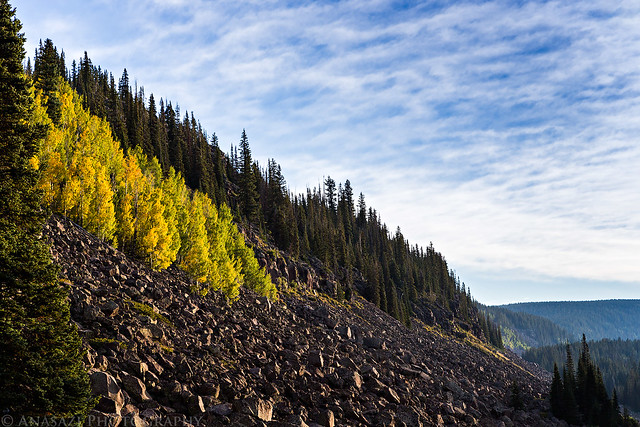 After turning off the highway at the Visitor’s Center, I started following a road I had never driven before into a new area of the Grand Mesa for me. I enjoyed seeing a new part of the Mesa as I drove to the trailhead and realized that I really need to spend more time exploring the Grand Mesa since it’s so close to home. The early morning light, clouds and reflections on the calm water of the many lakes I passed were very nice. 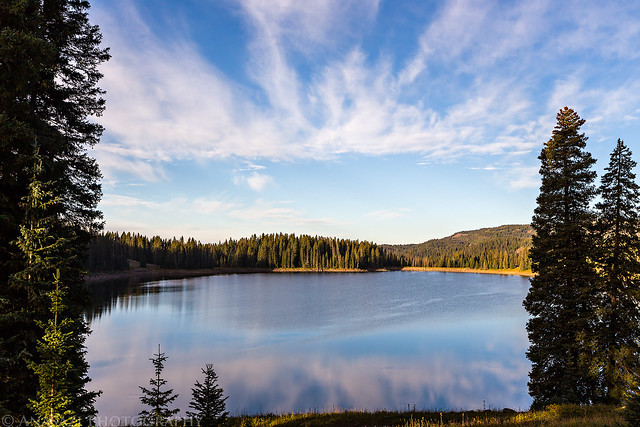 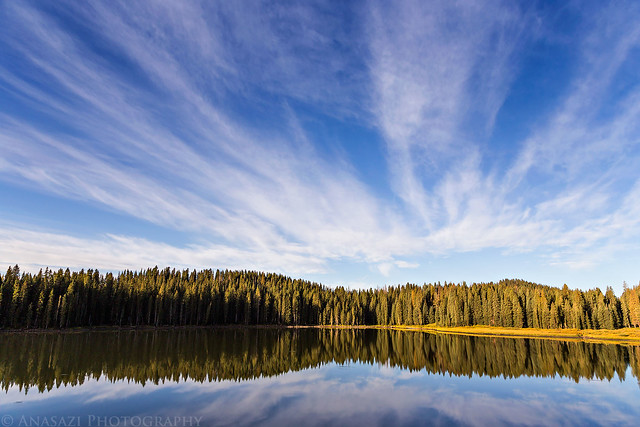 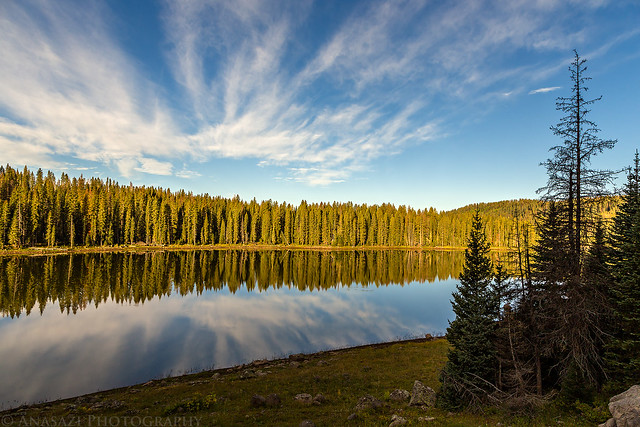 After reaching the Weir and Johnson campground, I parked near the reservoir to start my hike to Leon Peak. 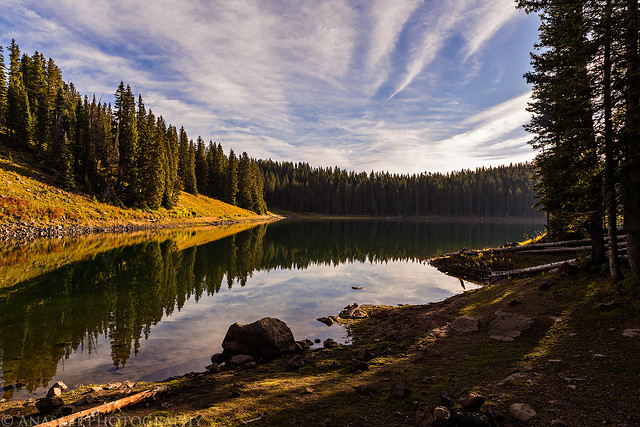 I started out by following the Leon Lake trail over the outlet of the reservoir and then followed the fork in the trail that was signed for Sissy Lake. 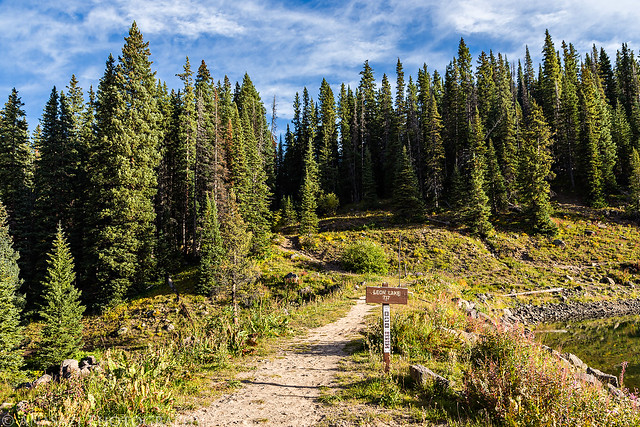 View of the Sackett Reservoir on the other side of the Weir and Johnson Reservoir. 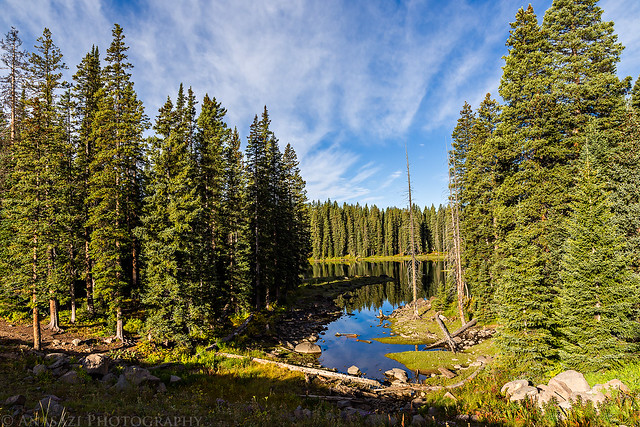 When I reached Sissy Lake the trail pretty much ended. I was expecting this since it’s not a very popular hike. I continued around the lake and climbed up a short distance to the ridge that would take me to Leon Peak. From there I followed the ridge the rest of the way. At first, the hiking along the ridge was easy, but it soon turned more difficult when the ridge turned into a jumble of large volcanic boulders. There was no trail, so I had to pick my way across the large moving boulders. While not very difficult, it did slow me down for the rest of the hike to the summit.

Following the ridge into the large boulder-field. 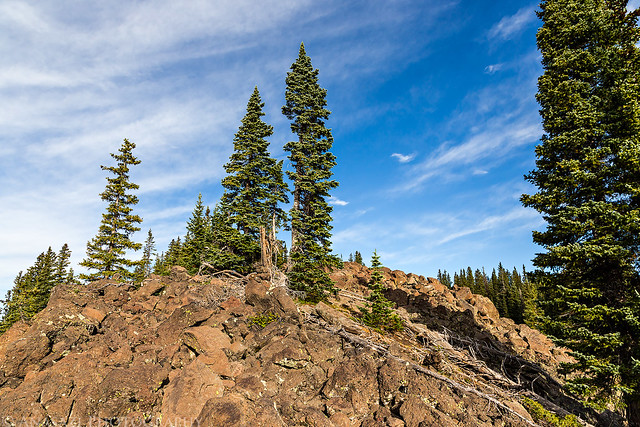 The last half mile (at least!) to the summit looked like this. 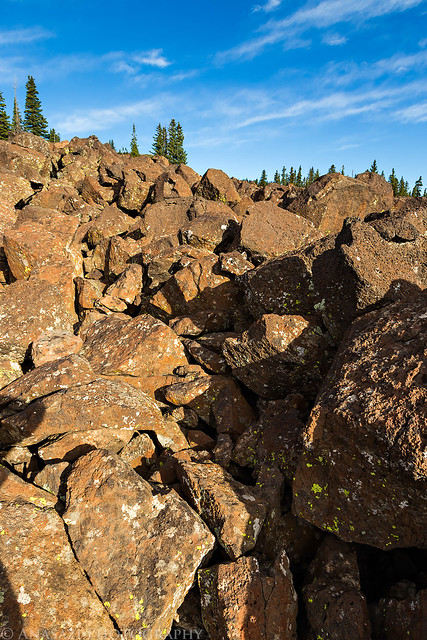 Nothing but large boulders to hike across. While not above tree line here, the boulder-field prevents many from growing in this area. 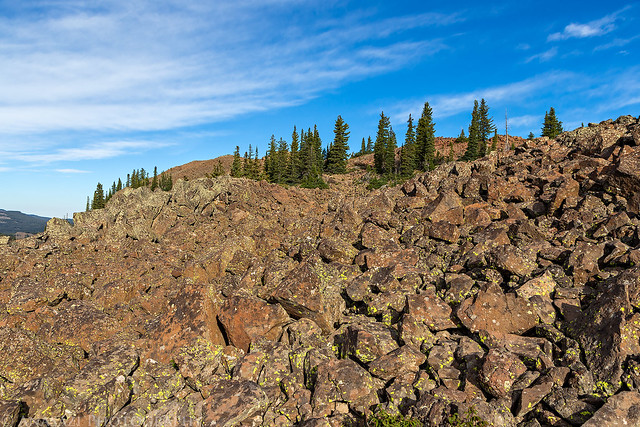 There were a few trees that managed to take hold up here, though. 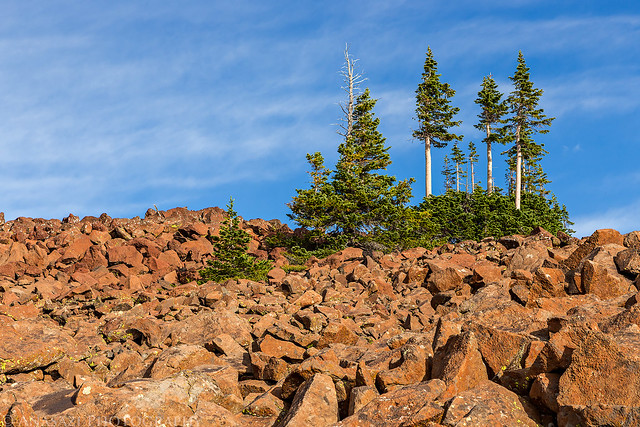 Finally, the summit of Leon Peak comes into view. 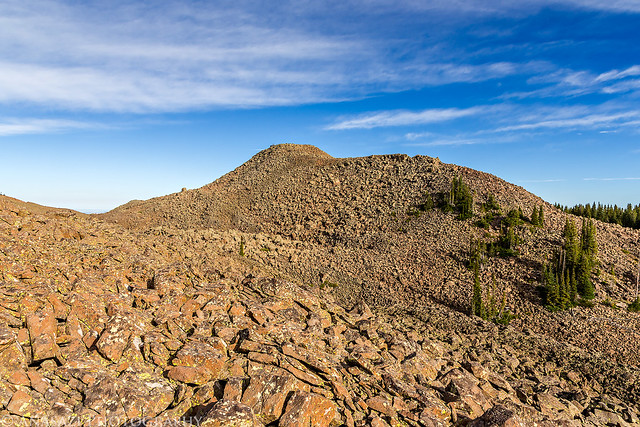 On top of Leon Peak is this old fire lookout that was built in the early 1900’s. It’s pretty amazing that it’s still standing after all that time in such an inhospitable location. 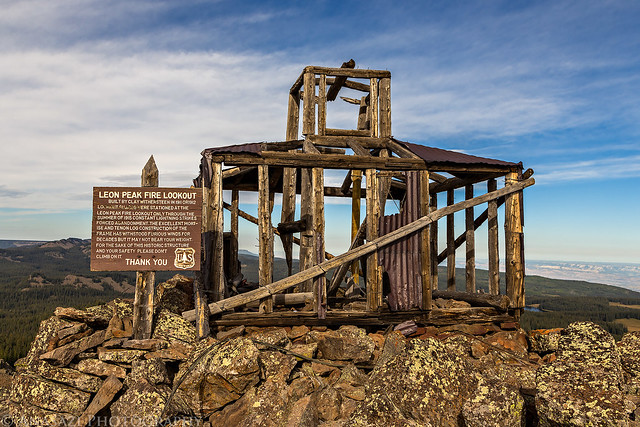 Lookout guards were stationed at the Leon Peak Fire Lookout only through the summer of 1915- constant lightning strikes forced abandonment. The excellent mortise and tenon log construction of the frame has withstood furious winds for decades but it may not bear your weight. For the sake of this historic structure and your safety pleased don’t climb on it. 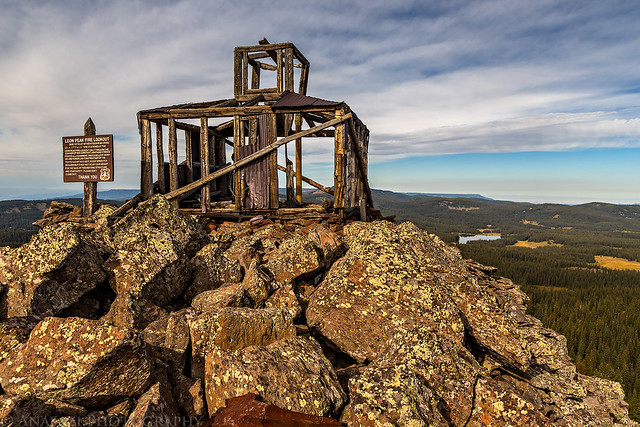 View from the top of Leon Peak. 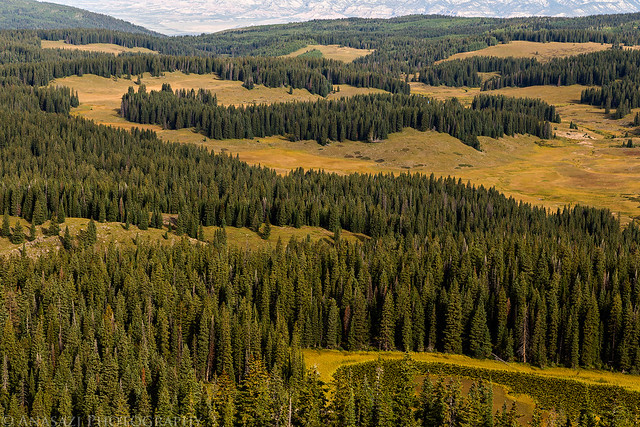 I had to take a shot of the benchmark located near the fire lookout. 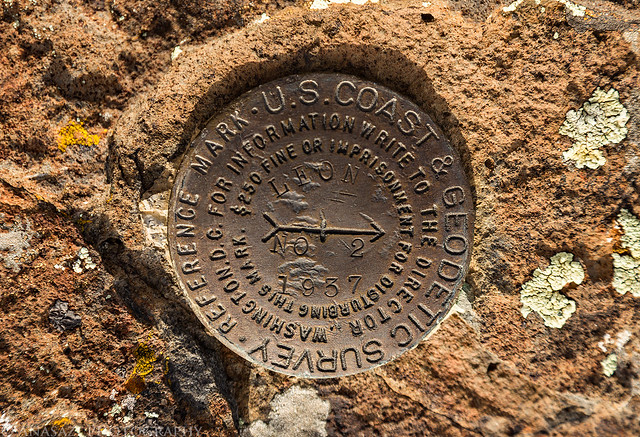 One last view through the old structure before starting my hike back down. 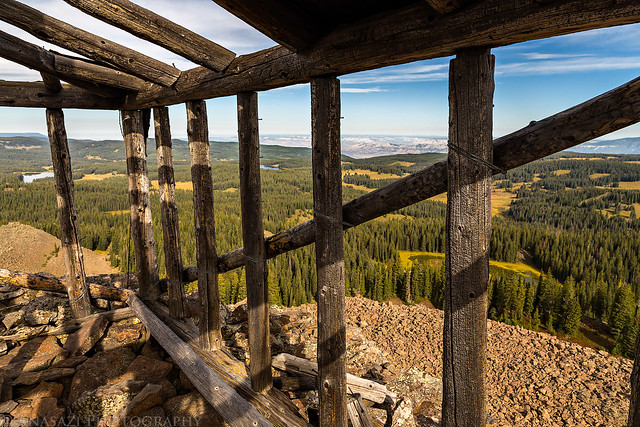 I spent a little time relaxing on the summit before starting my hike back down. The weather was comfortable and calm while I was up there, but I could tell that a storm was moving in. By the time I left the summit the sky had become overcast with clouds, so I didn’t take anymore photos on the way back. The boulders slowed me down on the way down again, but I still made pretty good time back to my Jeep and the drive home was uneventful. By the time I made it home around noon, a storm had moved in that brought some very strong winds and heavy rain, so I’m glad I had started early.