At the last minute I decided that I would head out after work on Wednesday evening and spend the night camping in the Dominguez – Escalante National Conservation Area between Grand Junction and Delta. After stopping home to pack up my Jeep I headed toward Delta on US50 and then turned of onto a dirt road to visit a few high points along the Dominguez Rim above the Gunnison River where I planned to spend the night.

Here’s a view over the Gunnison River from near PT 5460 which is just above Deer Creek near Bridgeport. You can see the Sneffels Range on the distant horizon. 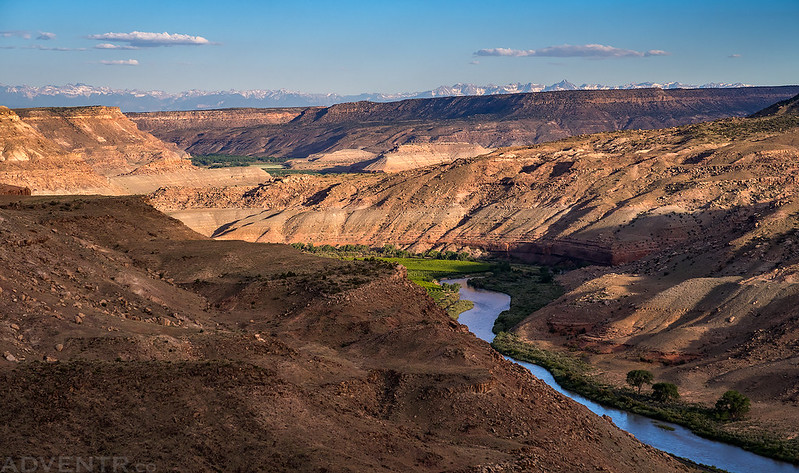 Looking the other direction from the same point toward the mouth of Big Dominguez Canyon. 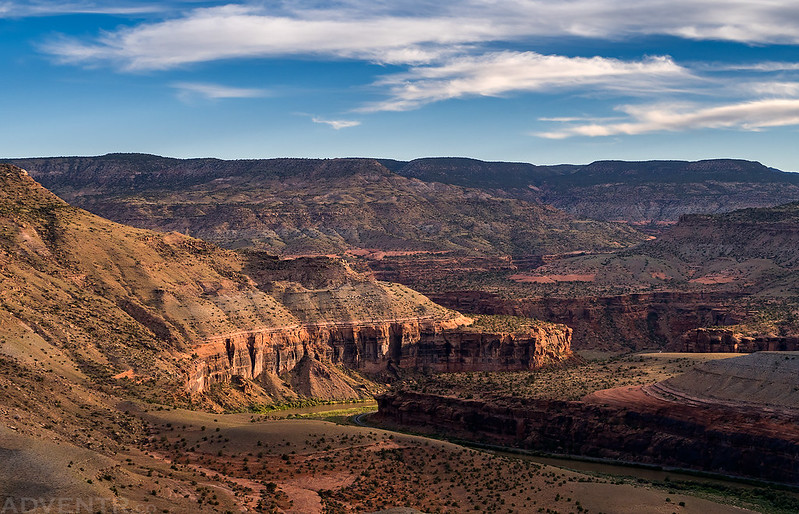 Next I stopped by the Palmer Benchmark (5,613) at the northern end of the Dominguez Rim, which is where I would end up spending the night. 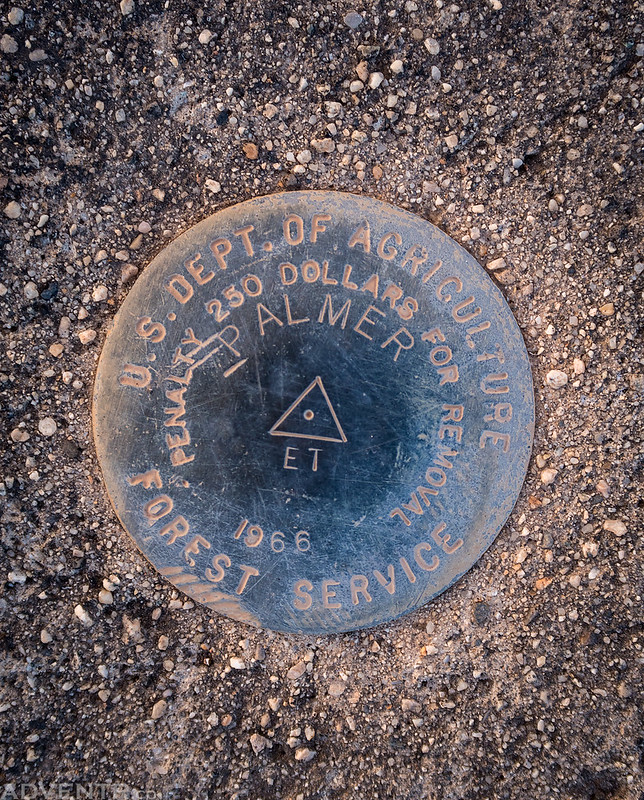 Before setting up camp I headed to the southern end of the Dominguez Rim to visit the Escalante Benchmark. There was a great view of the Grand Mesa to the east from this area. 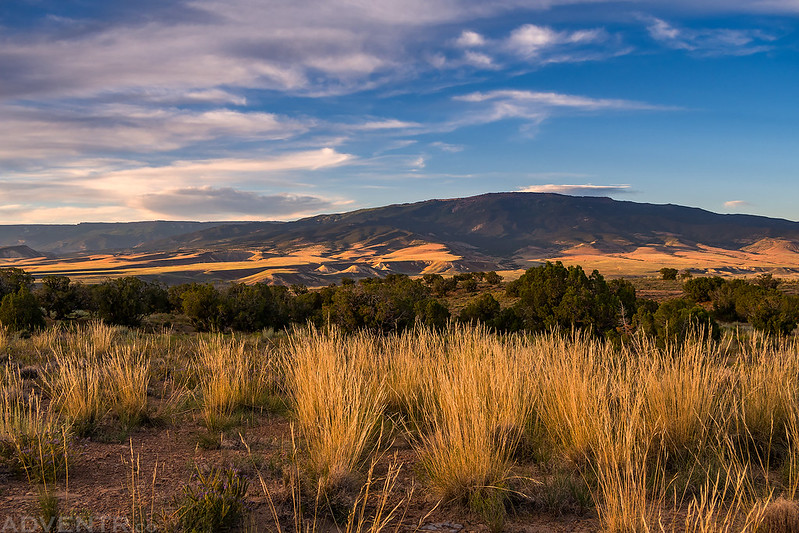 Driving along the edge of the Dominguez Rim. 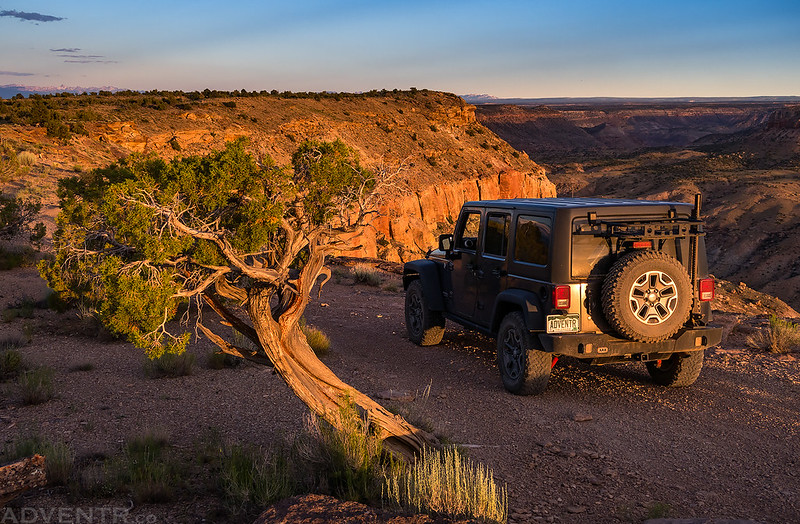 The road ended near the Escalante Benchmark (5,627), which is the high point of the Dominguez Rim. 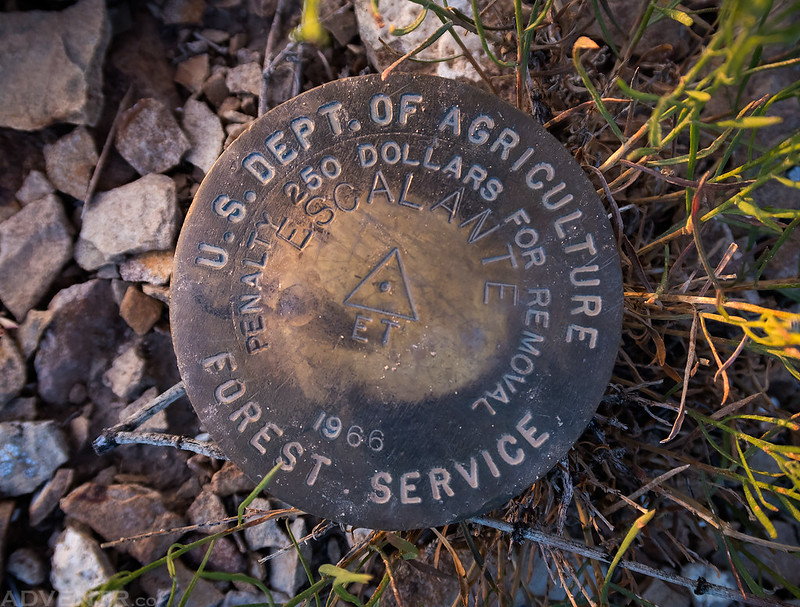 From here I had a great view over the mouth of Escalante Canyon just before sunset with Delta in the background. 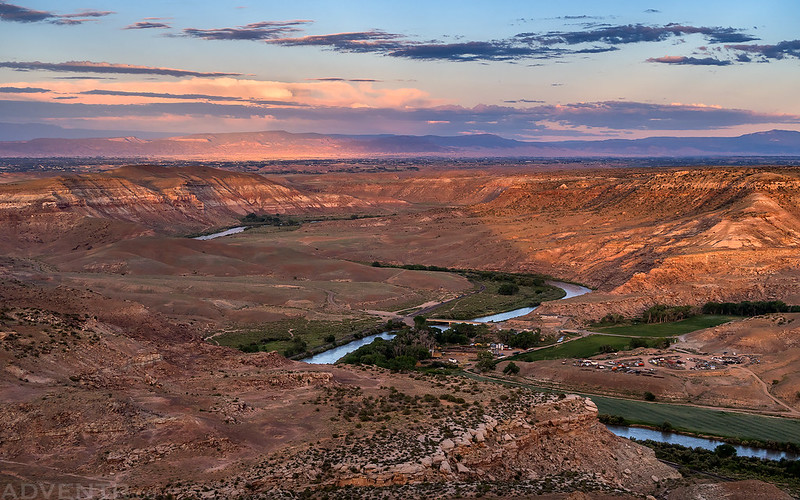 Warm light on the Dominguez Rim at sunset. I returned to the southern end and spent the night near the edge of the canyon above the Gunnison River. 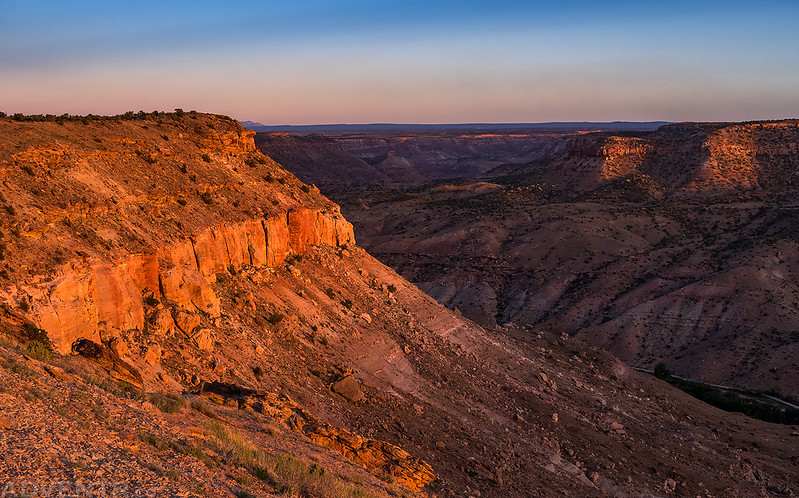 From my campsite along the rim I had a great view over Palmer Gulch when I woke up just before sunrise on Thursday morning. There were even a few clouds in the sky this morning that caught the colorful light! 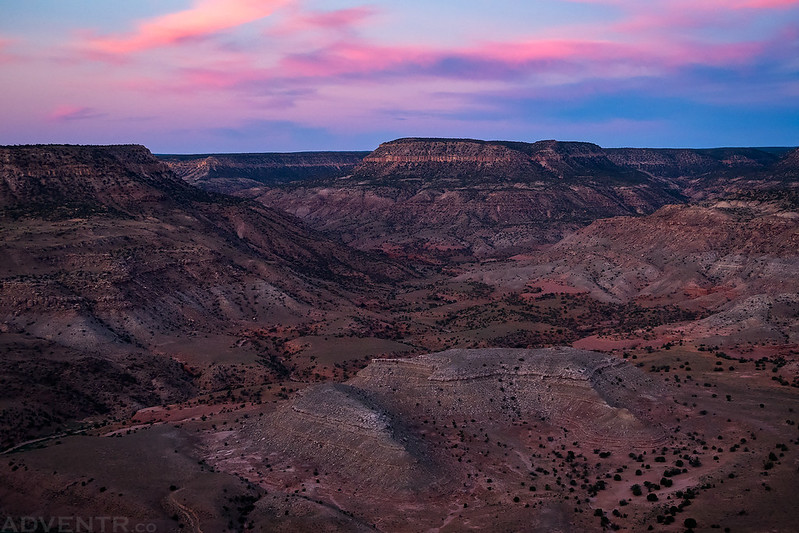 I had slept well overnight, but a few hours before sunrise the wind along the rim of the canyon had picked up and made some noise for the remainder of the night. It continued to blow until I left the area after sunrise. 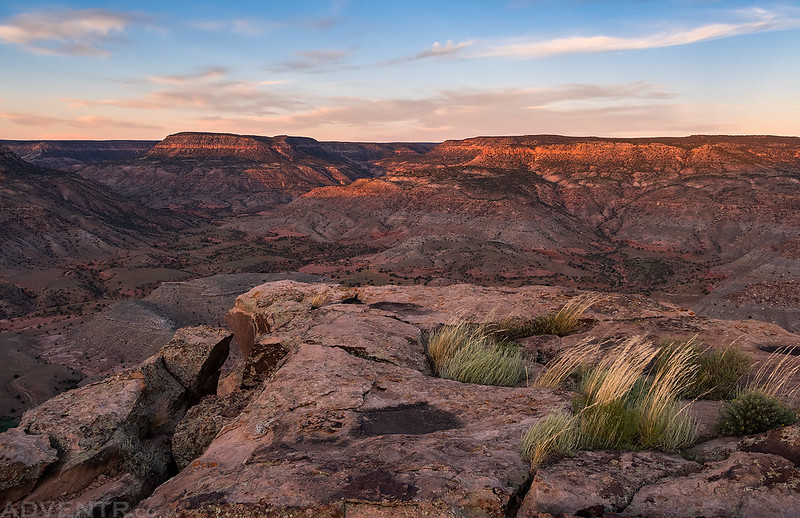 Looking down into Leonards Basin on the other side of the river inside the Dominguez Canyon Wilderness area. 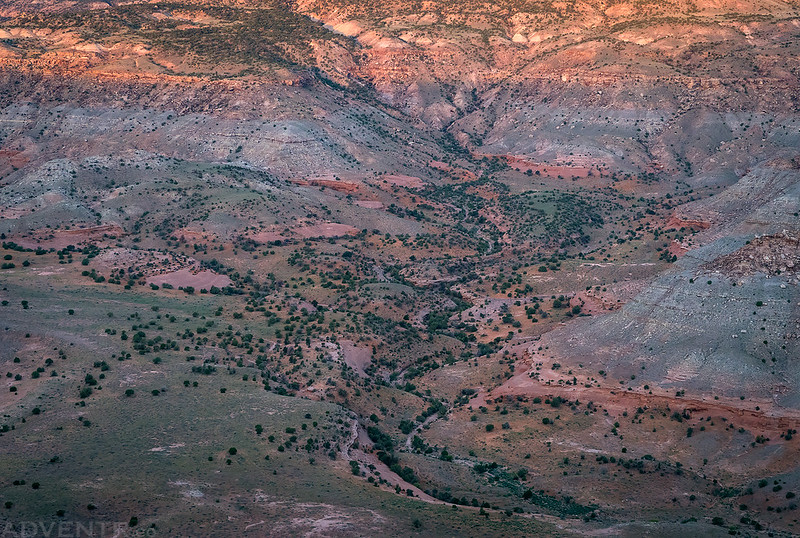 My Jeep at sunrise. 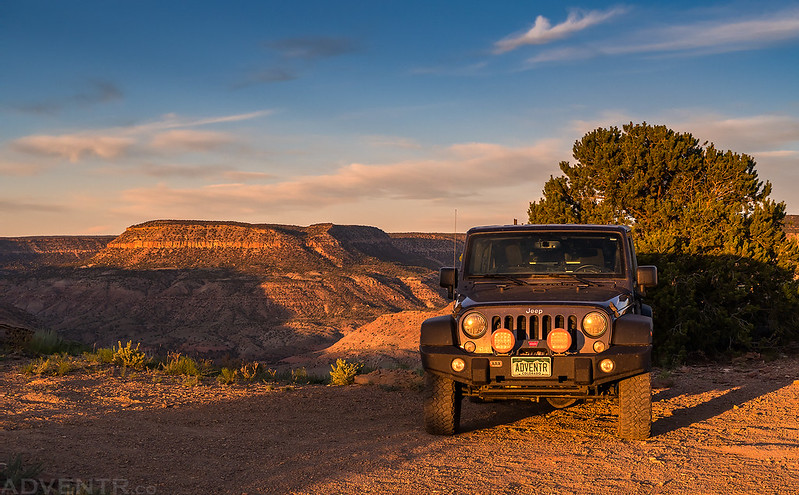 Our plan for the day was to meet at the Gunnison Forks Recreation Site around 8:30am, so I headed into Delta for breakfast and then made my way over there. I arrived early, so I was able to rearrange the gear in my Jeep to help make running the shuttle later a little easier. 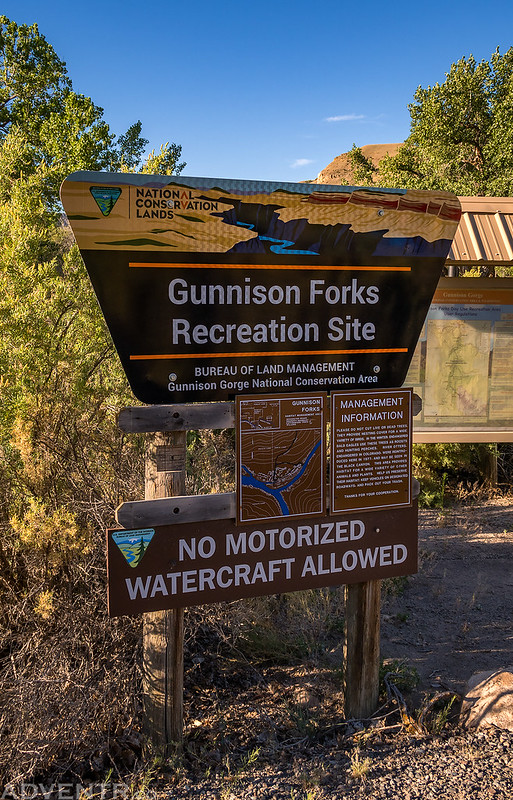 We ended up leaving my Jeep at the take-out and then took Chris’ car up to the Paonia River Park where we got our boats ready and were on the river just before 10:30am. We were the only ones at the put-in which made things easy and we would not see anyone else on the river all day which was surprising since it was a holiday and the weather was nice and warm. The river was moving swiftly and was very exciting to start with a couple of named rapids near the two bridges in Paonia, and at least one other one in-between. I actually got off to a bad start and hit one of the larger waves sideways, but was able to keep my balance and didn’t flip my boat this time. The water was pretty cold since it was recent snowmelt, so we didn’t really want to spend much time swimming in it if it could be avoided. When we got on the river in the morning the water level was about 2300cfs and when we got off in the afternoon it had dropped to around 2050cfs. I’d say we averaged about 5-6mph at this water level and we finished the 19 mile trip in less than five hours with a long stop for lunch.

Unfortunately, I realized after we got off the river that I must have had dirty water residue on the lens of my camera for most of the river trip, so many of the photos did not turn out very well. I tried to salvage a couple of them below, but they are not the greatest quality…

Welcome to the Paonia River Park. 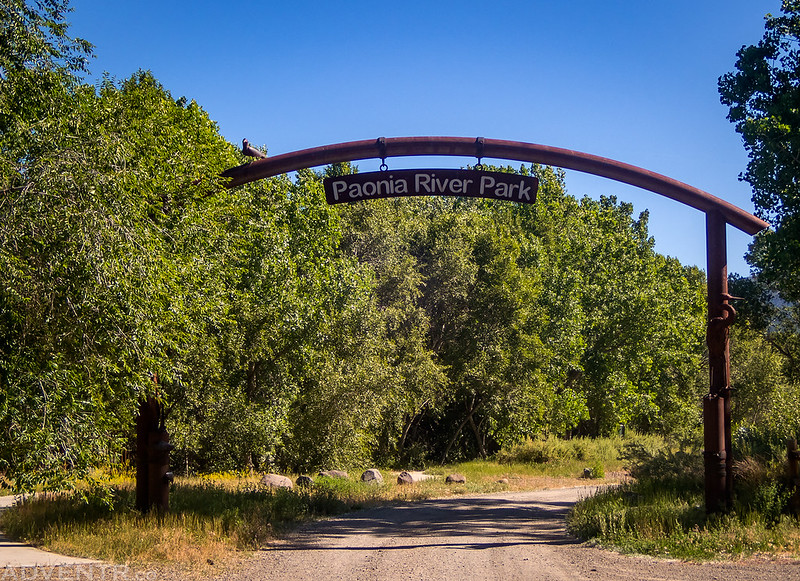 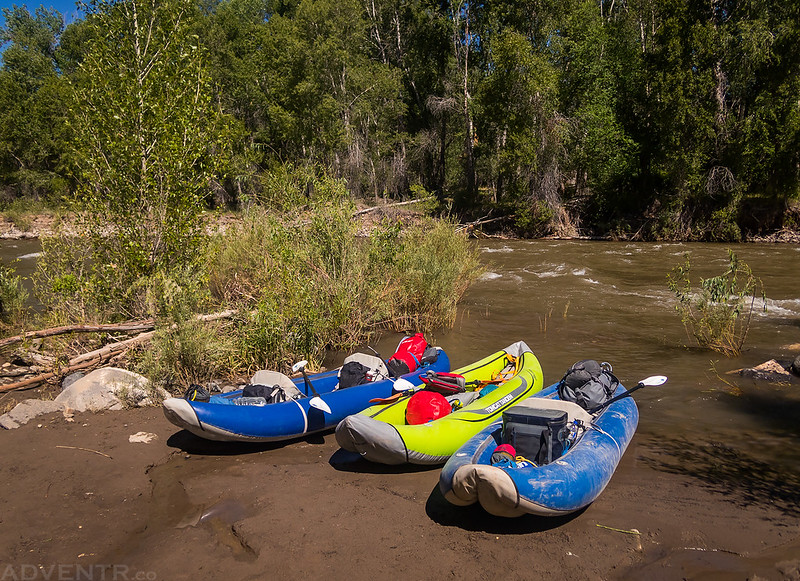 Floating under the first bridge in Paonia that had plenty of American flags for Independence Day. 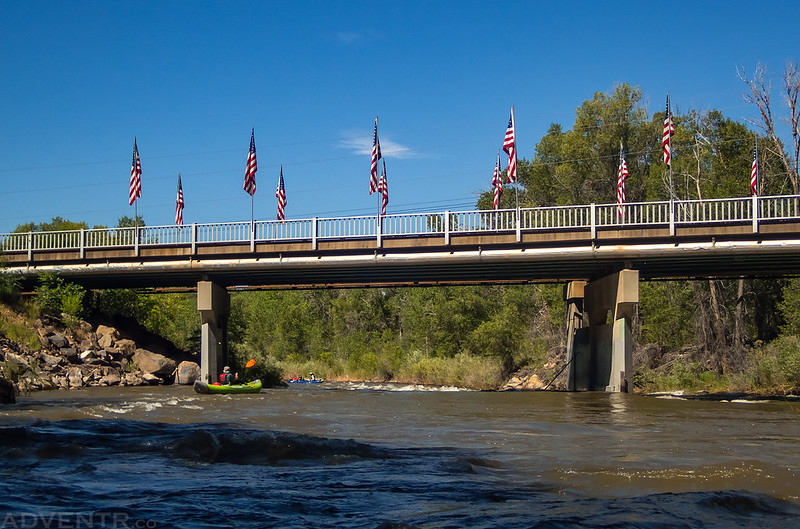 Fast-moving water between the two bridges in town. 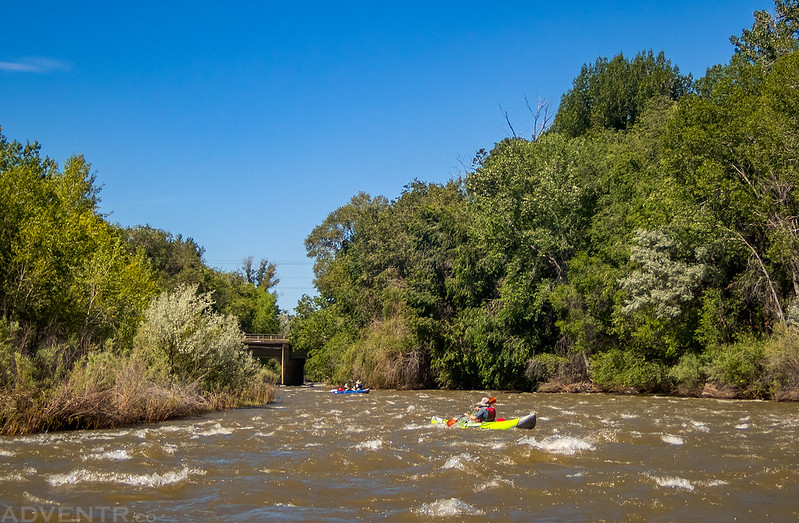 After a couple of quick miles we found an eddy to take a break in. 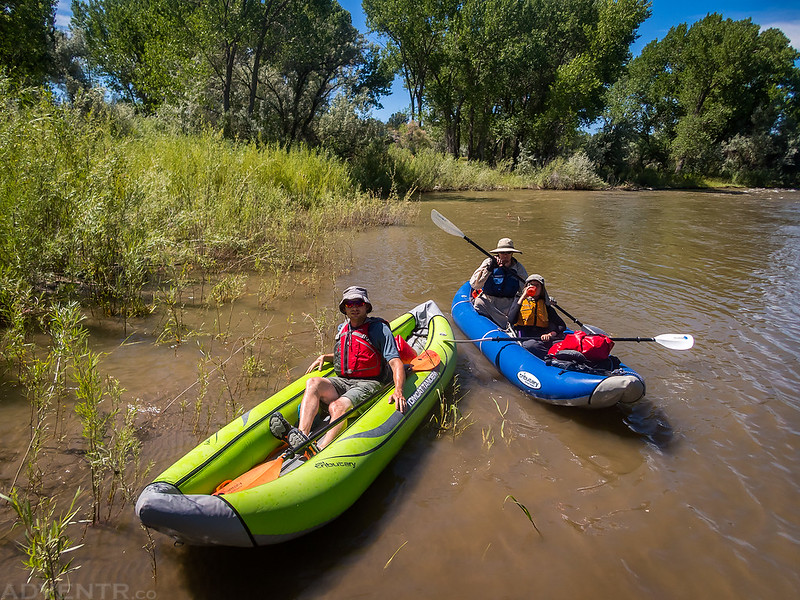 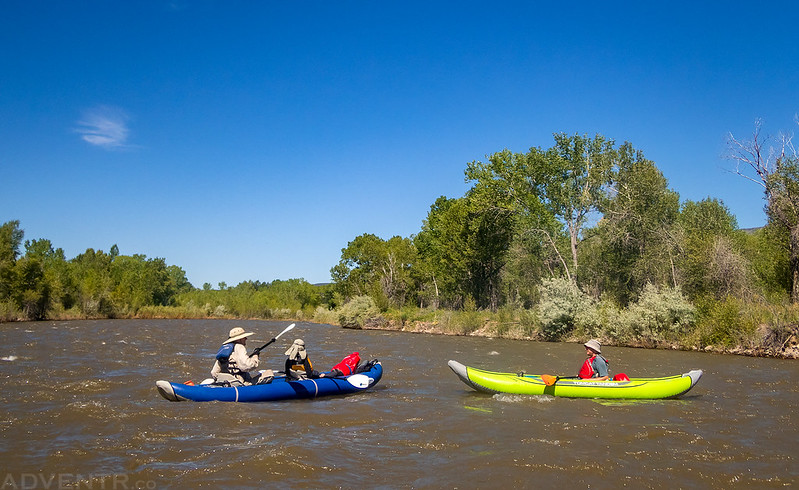 After floating through ‘The Ledges’ which was about a half-mile of constant class III rapids, we stopped for lunch on a rocky island. The Ledges are probably the toughest and biggest rapids I have been though, yet! 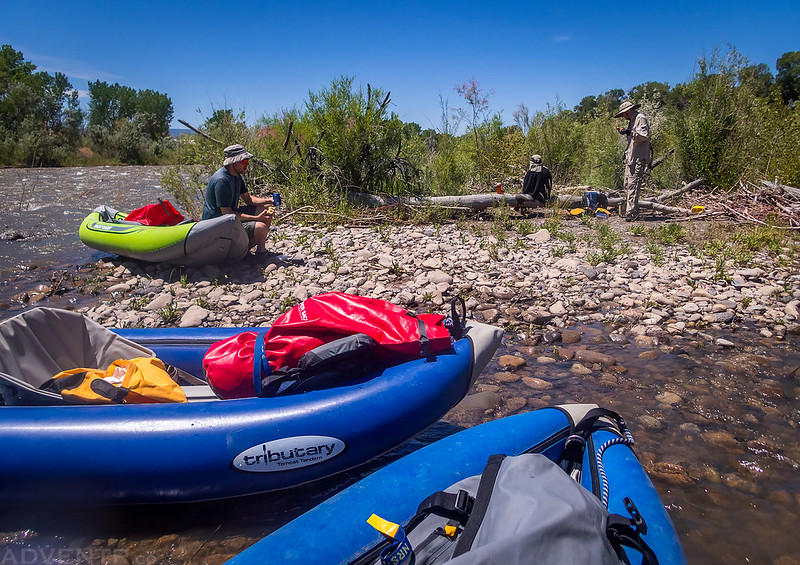 We had great views of Mount Lamborn (11,396) and Landsend Peak (10,806) throughout much of the float. Maybe one of these days I’ll actually get around to climbing Mount Lamborn- the Delta County High Point. 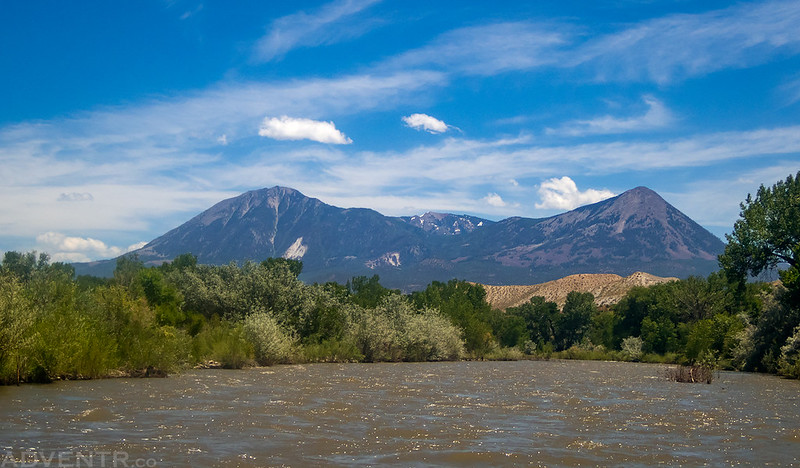 Shortly after passing through Hotchkiss we rounded a bend in the river and saw that a large cottonwood tree had fallen across the channel and was blocking most of it. A strong current was flowing right under the tree but we managed to paddle out of it to reach a rocky island on the right side of the river. This strainer in the river created a dangerous situation but we were able to walk our boats around the right side of it and carry on with the trip. As far as I know, this tree is still there and there are currently no plans to remove it, so here are the coordinates of it just in case you are planning to run this stretch of the river soon: 38°47’24.84″N 107°44’18.86″W

Here’s a poor photo of the cottonwood tree across the river channel with Jackson and Chris going around the right side in the shallow water. 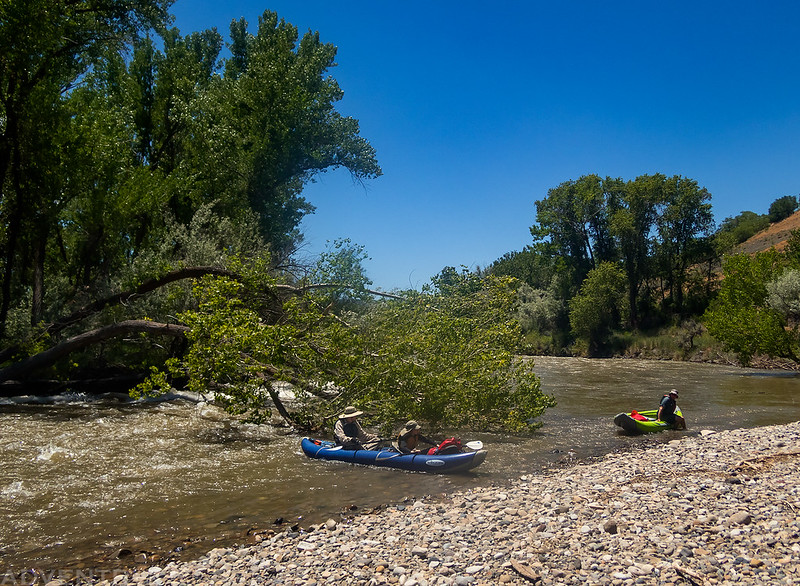 Later in the day another group wasn’t as lucky and a yellow boat got caught underneath the large tree. Thankfully everyone was OK, but the boat was stuck there for a day or two until it was recovered. Here’s an overhead drone photo of the strainer that was taken by the Hotchkiss Fire District later in the day. You can see the yellow boat under the tree in the upper left. As we got closer to the Gunnison River we entered a nice little canyon. 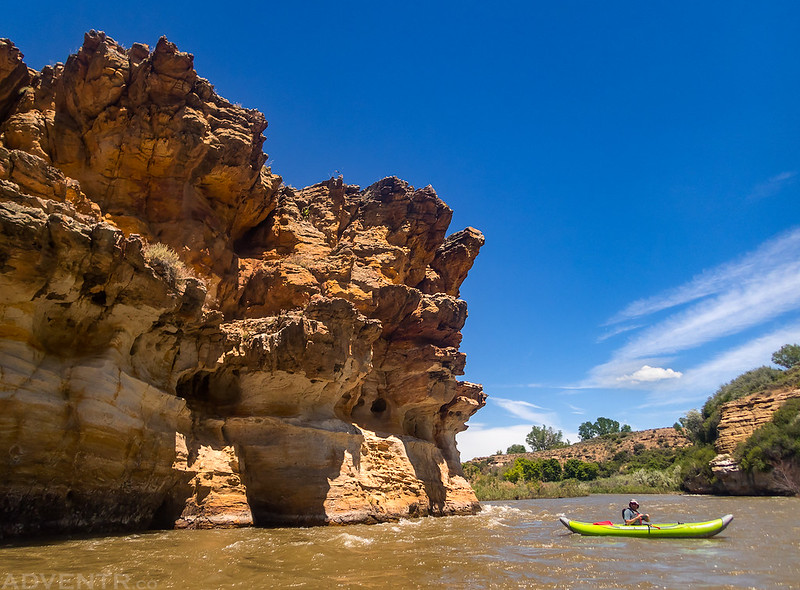 We passed under this Blue Heron Rookery shortly before reaching the take-out at Gunnison Forks. I know the quality of the photo isn’t great, but if you look closely you can see all the Blue Herons in their nests which was pretty cool! 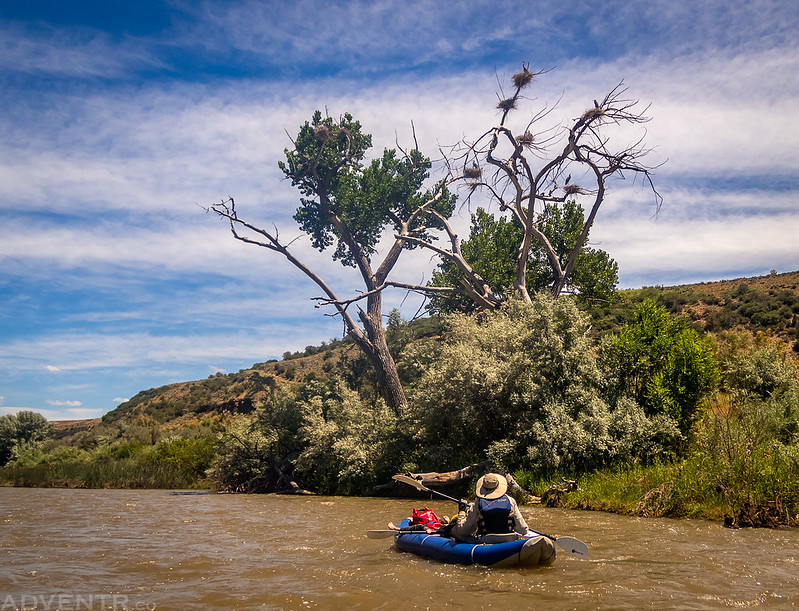 We got off the river around 3:30pm and I took Chris back to Paonia to get his car while Jackson and Ken stayed behind to wait for us. When we returned Jackson said the mosquitoes had been pretty bad, so I’m glad we didn’t have any issues with them earlier in the day like during our trip last weekend! We finished packing up our boats and gear and then headed back home for the day. It was a nice way to spend Independence Day!