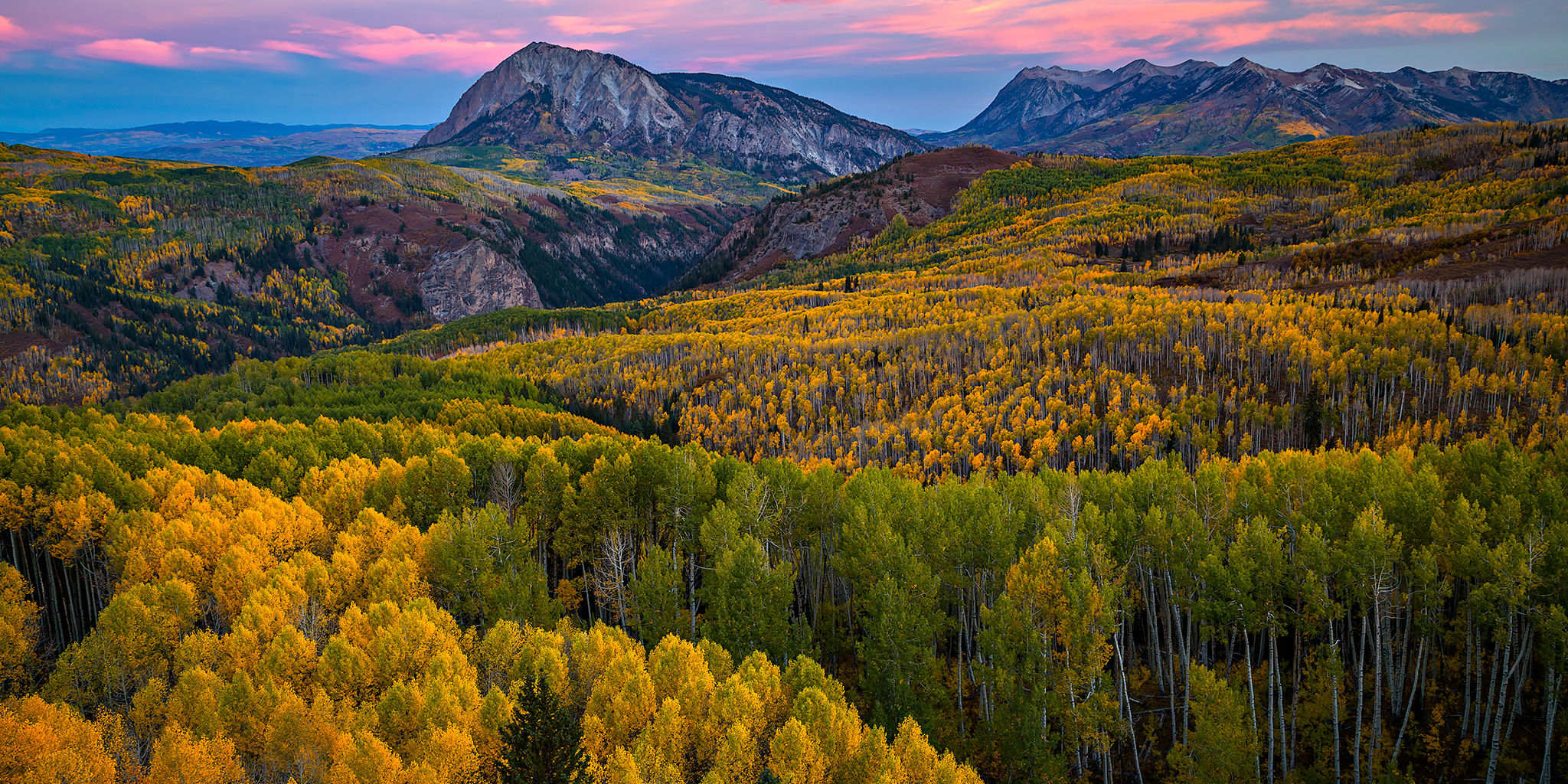 A variety of colors along a road near Horse Ranch Park. 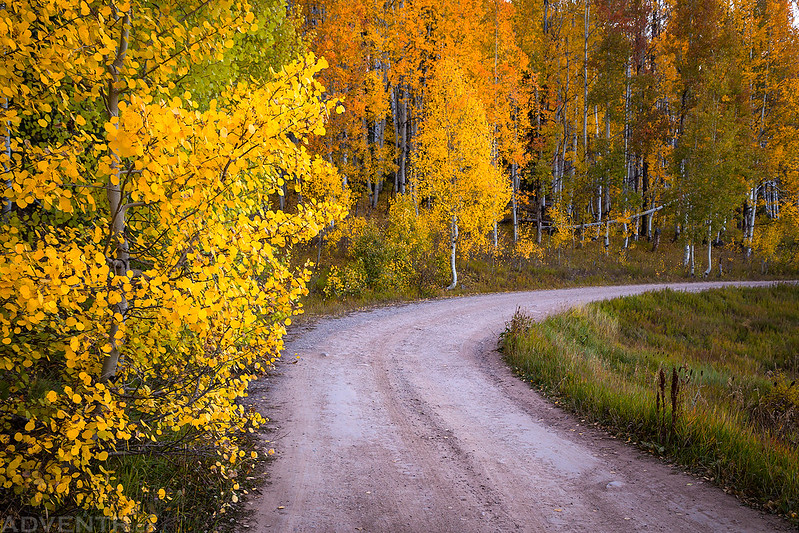 As usual, I left straight from work on Friday and stopped in Delta for a quick dinner before continuing on through Hotchkiss and Paonia to Kebler Pass Road. I arrived in the Horse Ranch Park area shortly before sunset and went for a short hike up the Cliff Creek Trail. There seemed to be a good mixture of greens, yellows, oranges and reds in the area with plenty of fallen leaves, too.

I went for a short evening hike up the Cliff Creek Trail. 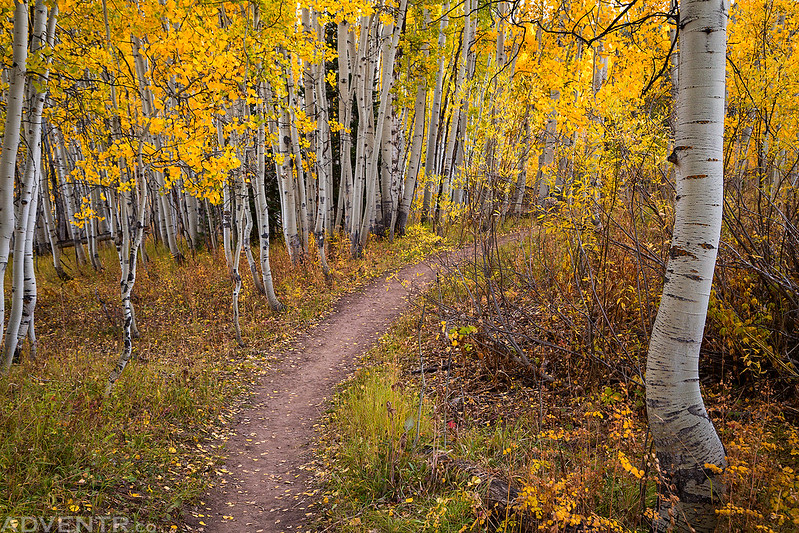 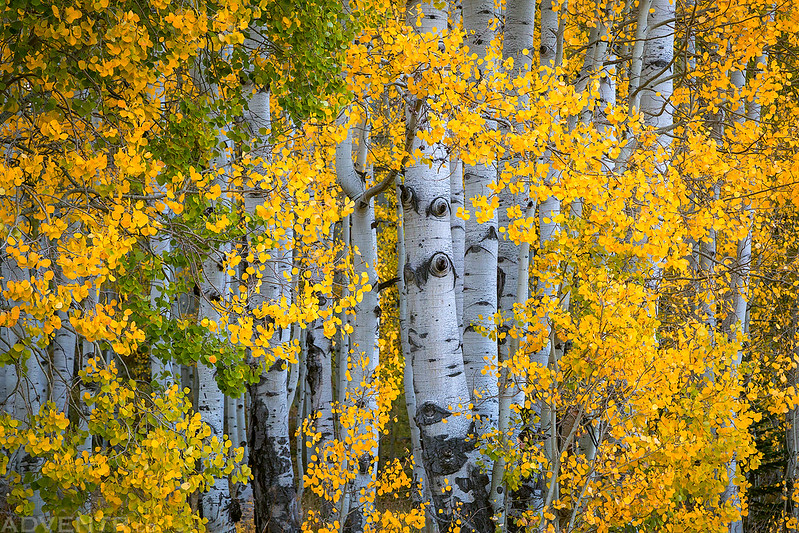 This area has become much busier since the last time I was here in the fall and there appeared to be a couple of large photography workshops wandering around. Normally I would have ventured further into the wilderness away from the crowds, but since I came straight from work I had limited time to get somewhere before sunset, so access had to be quick and easy. With clear skies I photographed the Ruby Range after sunset in the soft light of dusk and then headed back down the road to an open campsite above Ruby – Anthracite Creek for the night.

It seems there is always one red patch of trees located below The Dyke. 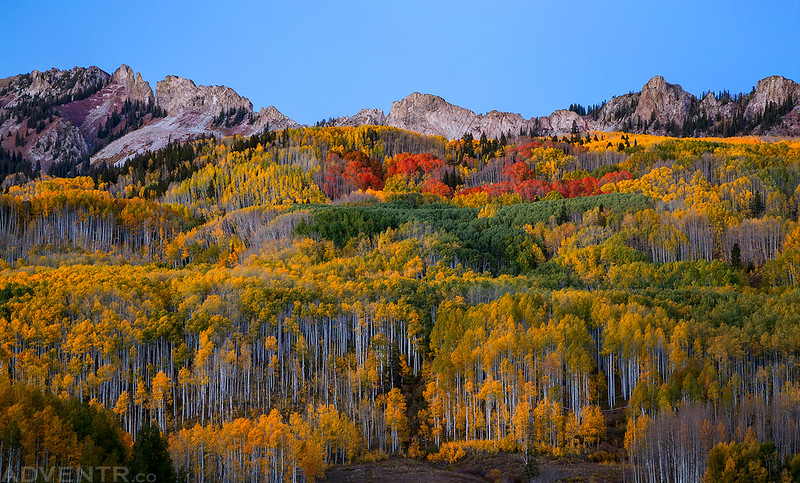 The Ruby Range at dusk. 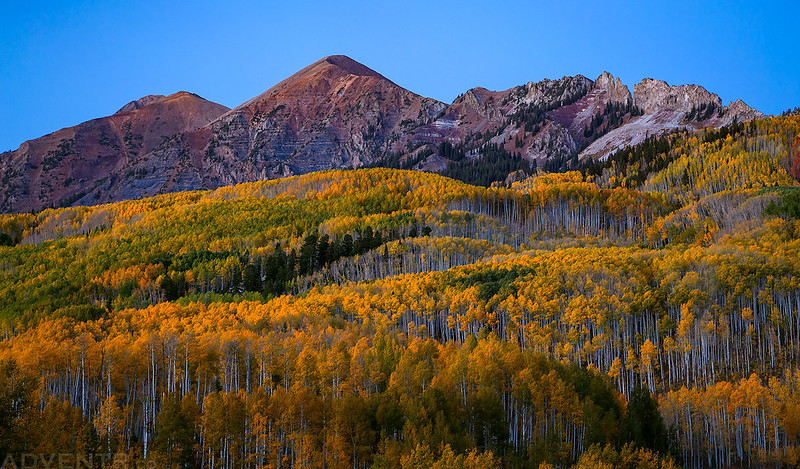 I didn’t sleep very well overnight, but on Saturday morning I still woke up early and drove back over to the Horse Ranch Park Trailhead so I could hike to an overlook that I had visited earlier in the summer. I hiked through the dark by the light of my headlamp and arrived just in time to catch the early morning light that I was looking to capture. I was actually expecting to find other photographers at the spot when I arrived, but I ended up having the overlook all to myself. There is a great view of Marcellina Mountain and The Raggeds from the overlook and I enjoyed watching the sunrise from here. I even heard a few elk bugling down below me before the sun came up.

There was a nice view of Marcellina Mountain and The Raggeds from the overlook. 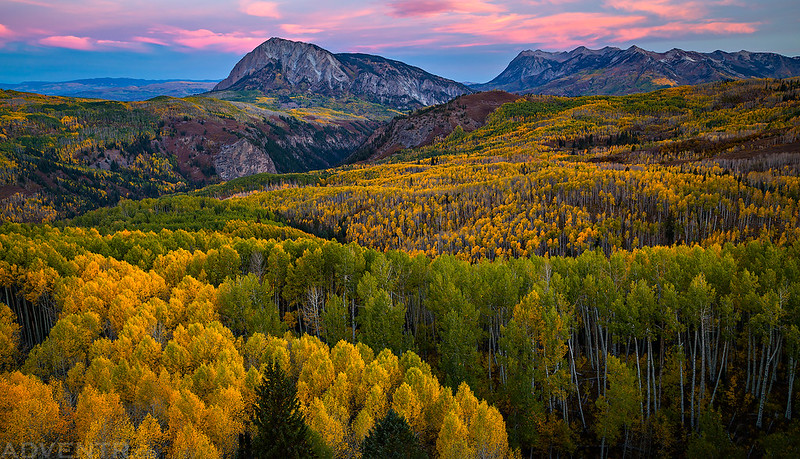 A closer look at The Raggeds in the distance. 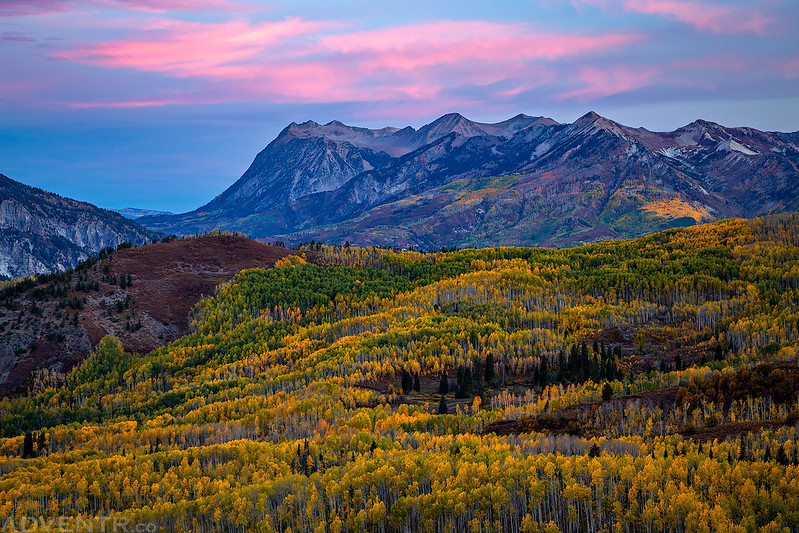 While there was still a lot of green around, there were some nice yellows, too. I actually prefer the mix of colors. 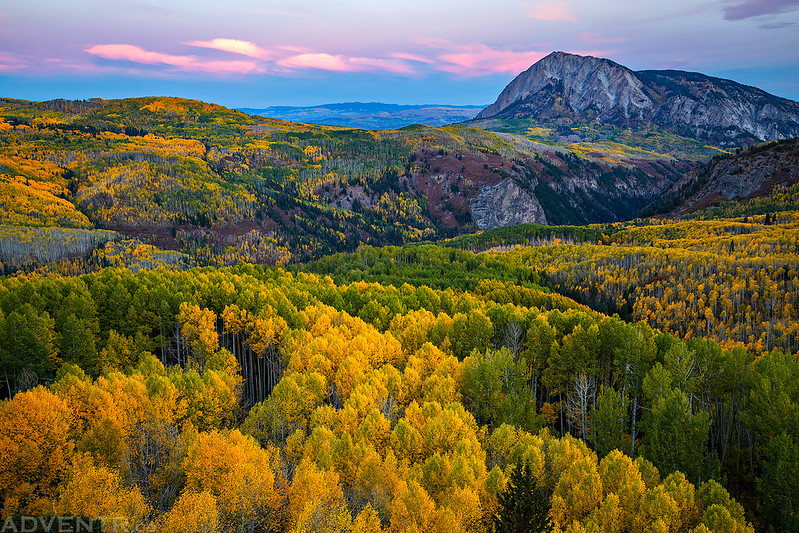 Looking down below from the overlook. 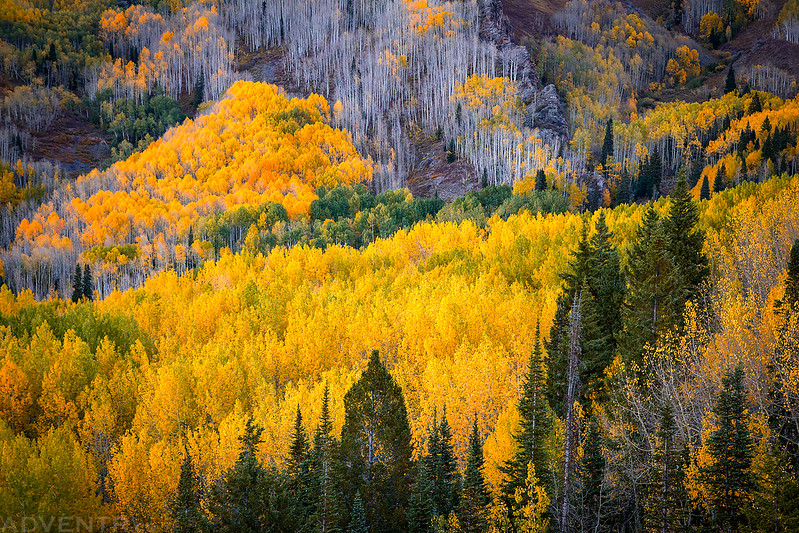 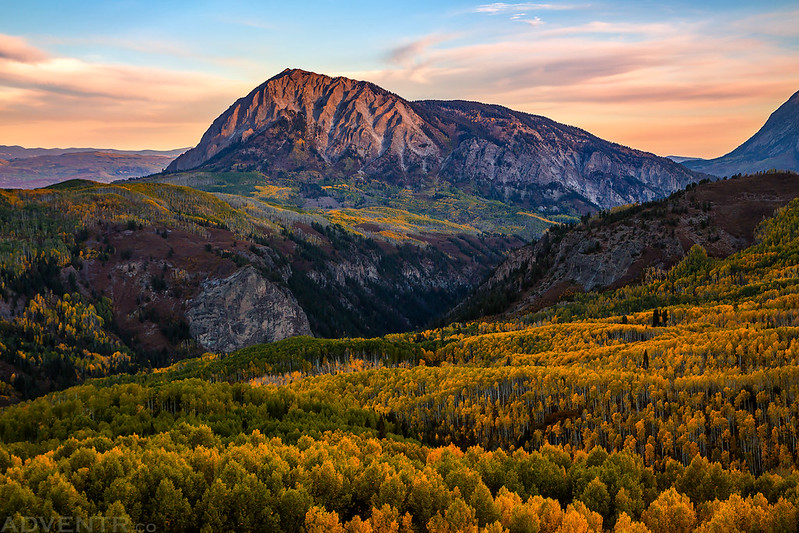 Hiking back through the aspen forest. 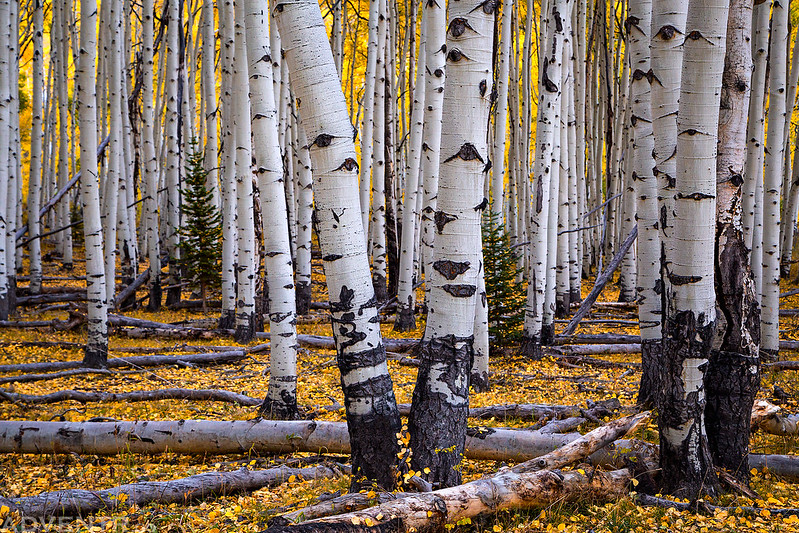 I liked the contrast between the short and tall aspen trees here. 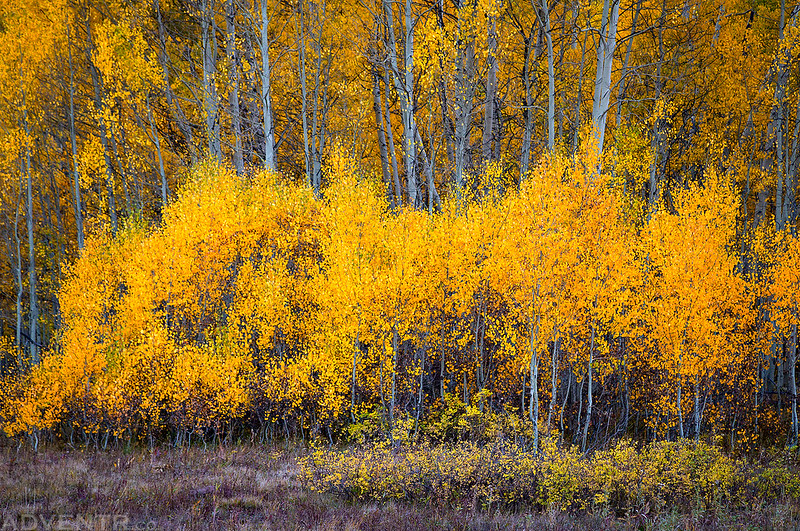 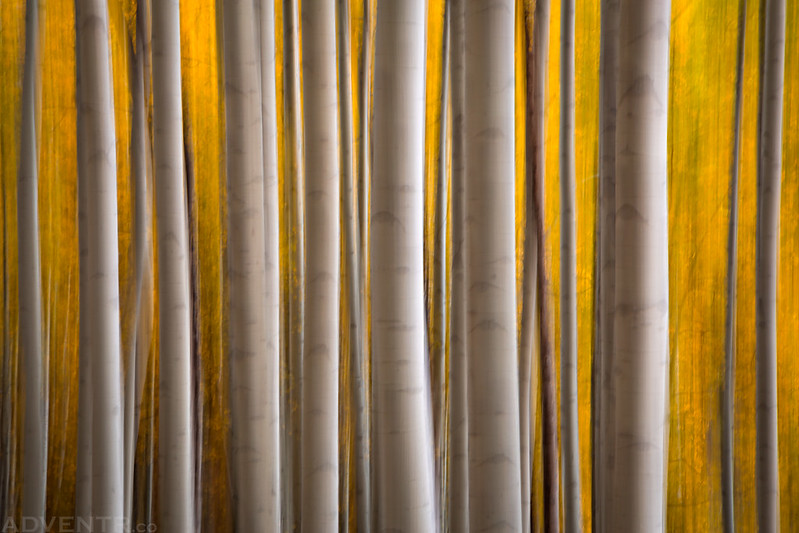 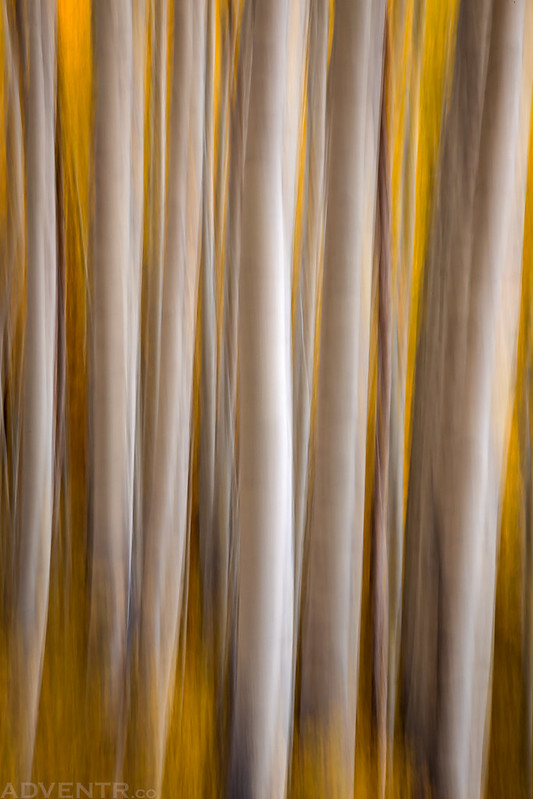 It was a beautiful morning for a hike and I didn’t see anyone else on the trail until I was back at the trailhead. 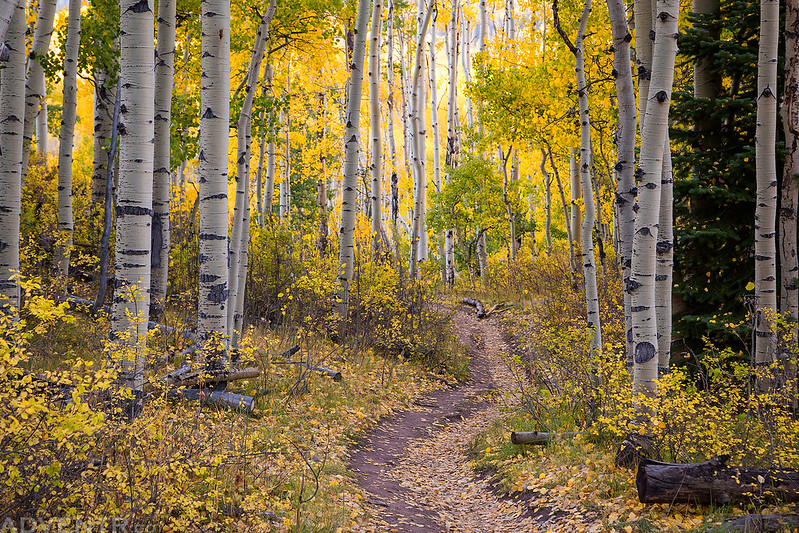 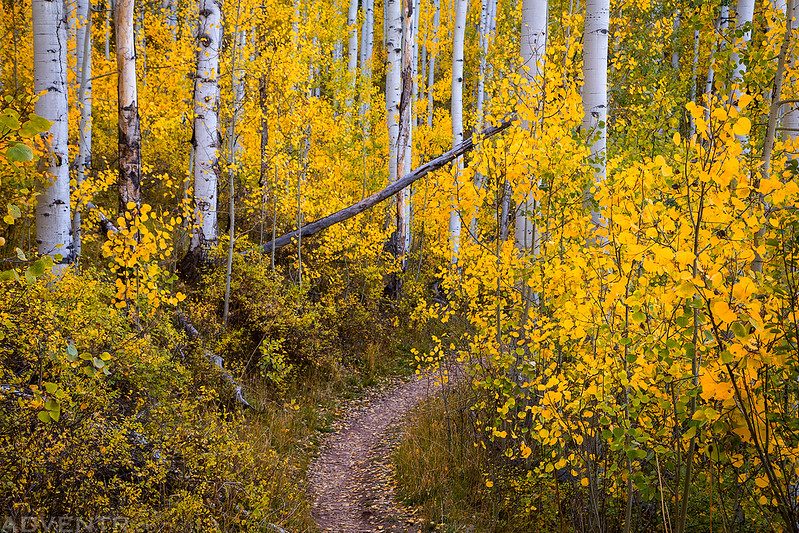 A view of East Beckwith Mountain as I neared the trailhead. 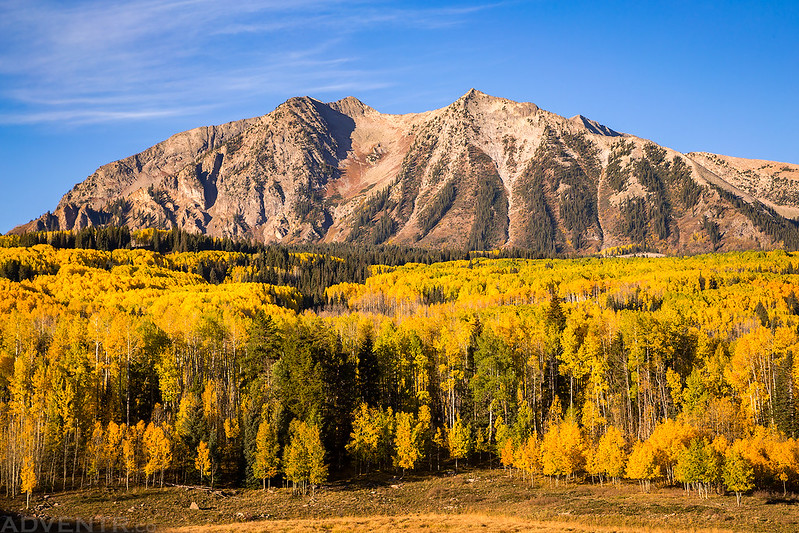 After returning to my Jeep I continued driving over Kebler Pass and into Crested Butte. Then I followed the road along the Slate River, past the Oh-Be-Joyful Trailhead, and up to the Paradise Divide. Along the way I got stopped by a pair of Jeeps from Kansas that were parked in the middle of the road and had their recovery gear out. I couldn’t see what was around the bend, but someone told me that they had just pulled out a truck that was stuck and would be out of the way shortly. I assumed it was a pickup truck, so I was very surprised when a large box truck came driving around the corner a few minutes later! Apparently the driver of this truck was following his GPS up this road and had missed the sign about the steep and narrow road. When the truck and Jeeps were out of the way I finished the drive to the top and parked my Jeep at the pass so I could hike to the summit of Mount Baldy (12,805). I had actually wanted to hike this peak earlier in the summer but was turned away by closed roads at the time.

As I started hiking up the east ridge of Mount Baldy I had a good view back to Yule Pass and Purple Mountain (12,958). 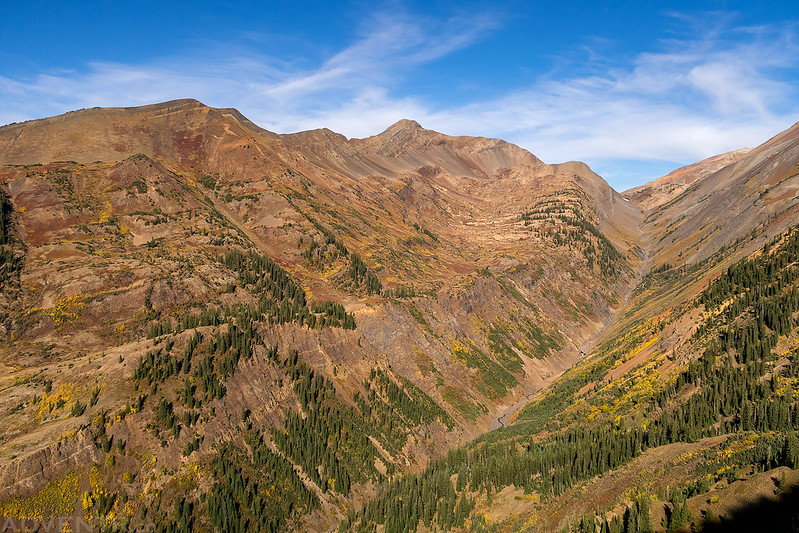 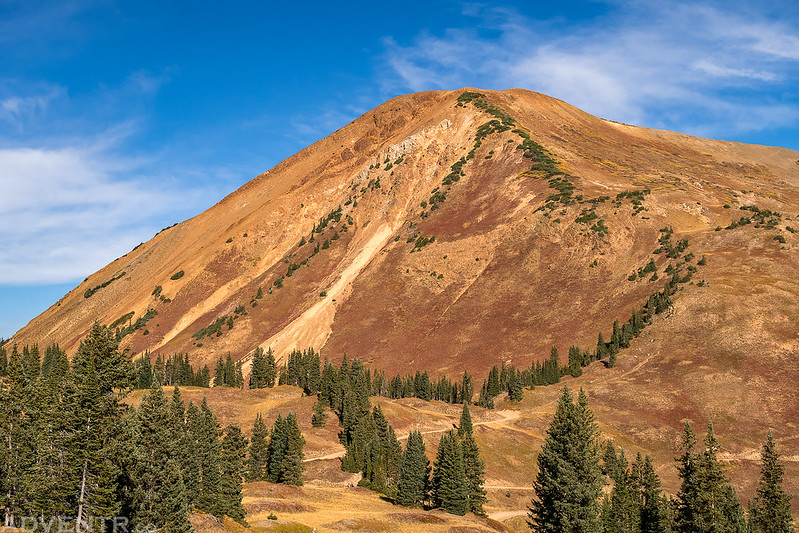 Purple Mountain with the Paradise Divide below. 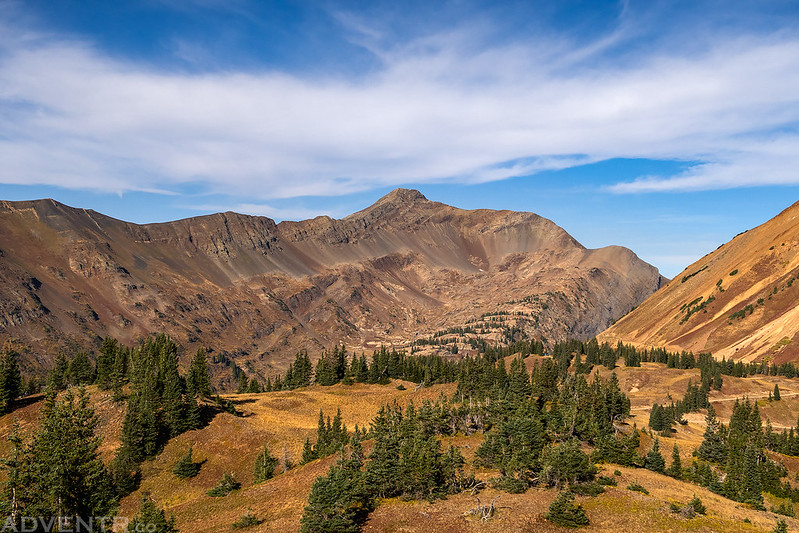 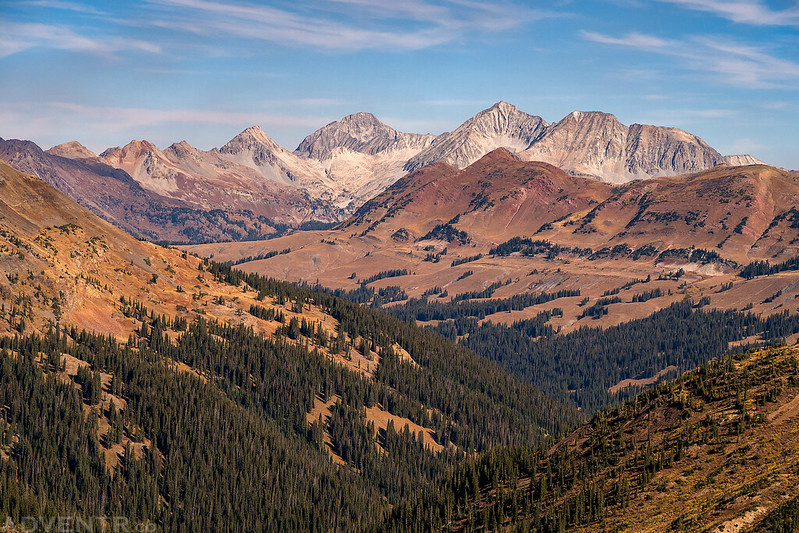 Once I reached the top of the steepest part of the ridge, there were still a bunch of ups and downs to get over. 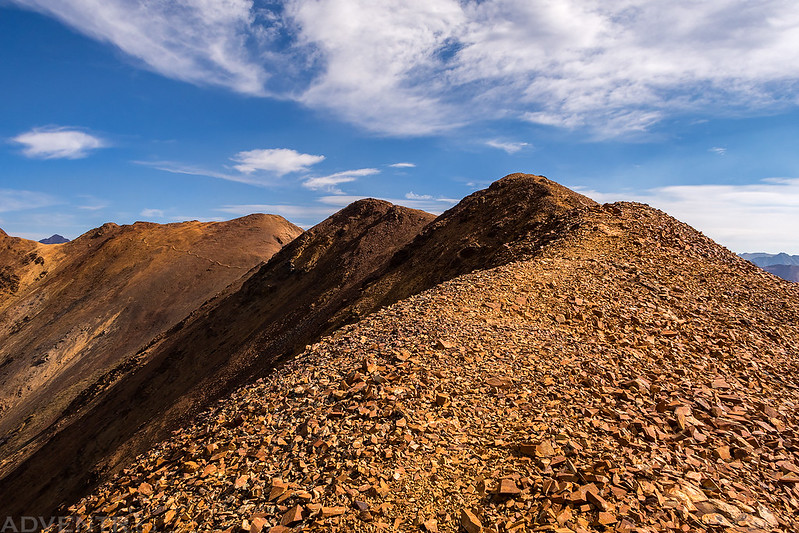 Following the ridge to the summit of Mount Baldy, which is actually hidden completely behind that peak on the left. 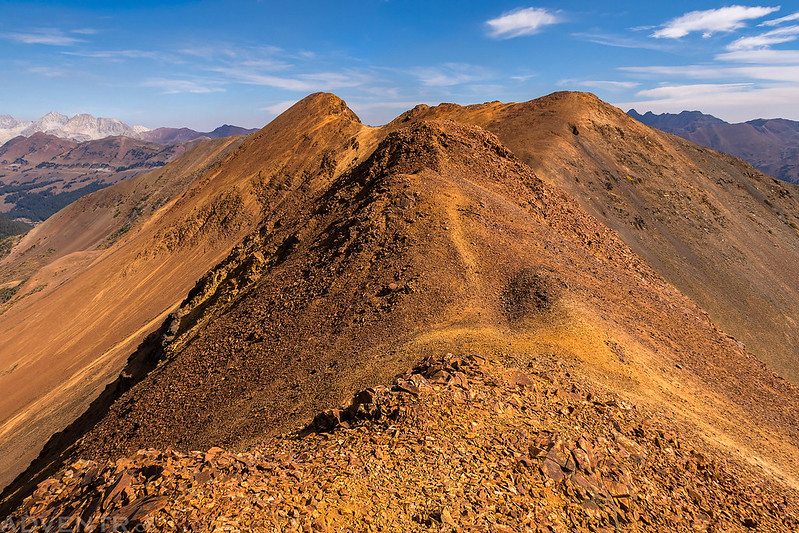 As I was hiking up the ridge I started to smell smoke in the air and when I reached the top I was able to see thick smoke in the air over Gothic Mountain (12,625) around Crested Butte. It was most likely from the wildfires burning in Utah at this time. 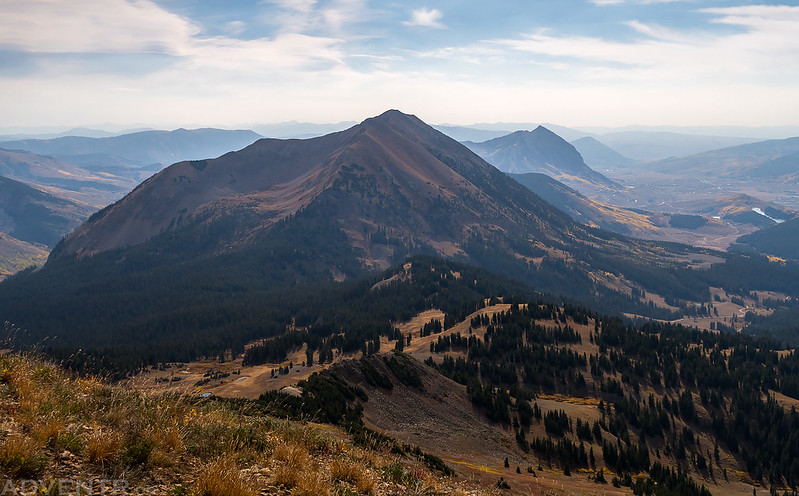 Even though there was a chilling wind this morning, the ridge walk over to Mount Baldy was nice and the views around were outstanding! Seriously, I would hike this peak again just for the 360 degree views! 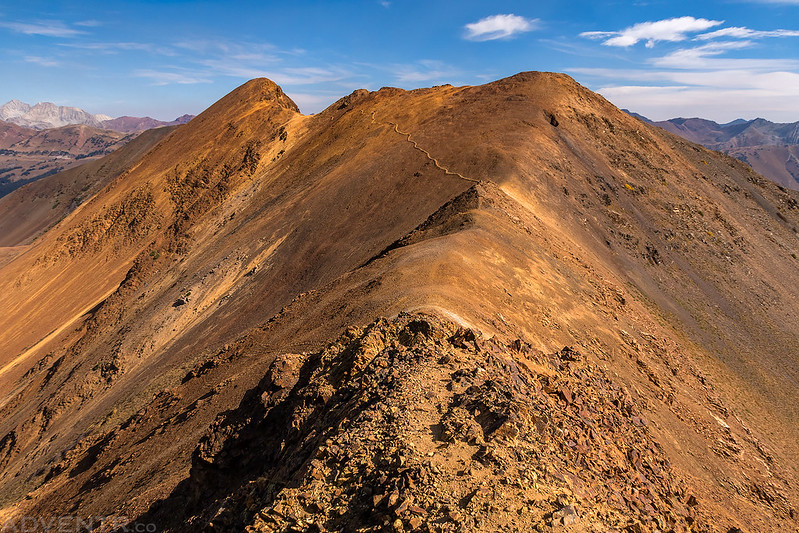 There was a pretty good trail to follow that bypassed one of the higher bumps on the ridge. 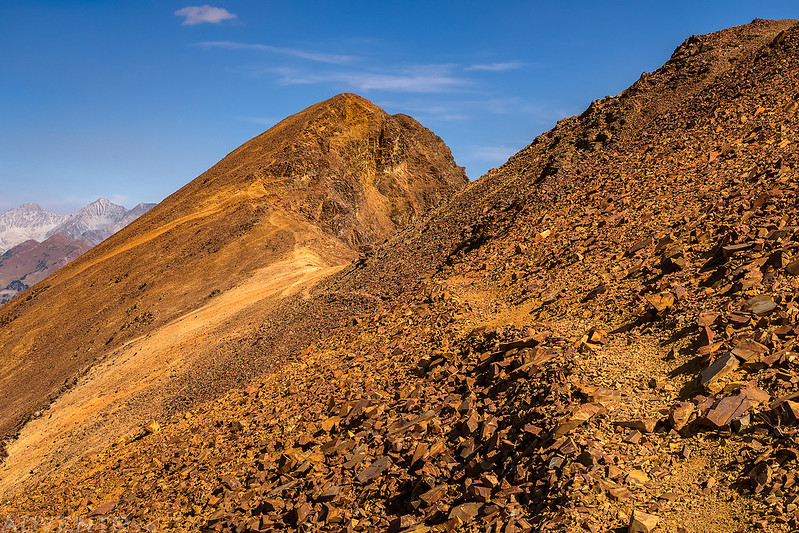 Finally, a view of the true summit! Capitol Peak is on the left in the background and Maroon Peak (14,156) is on the right. 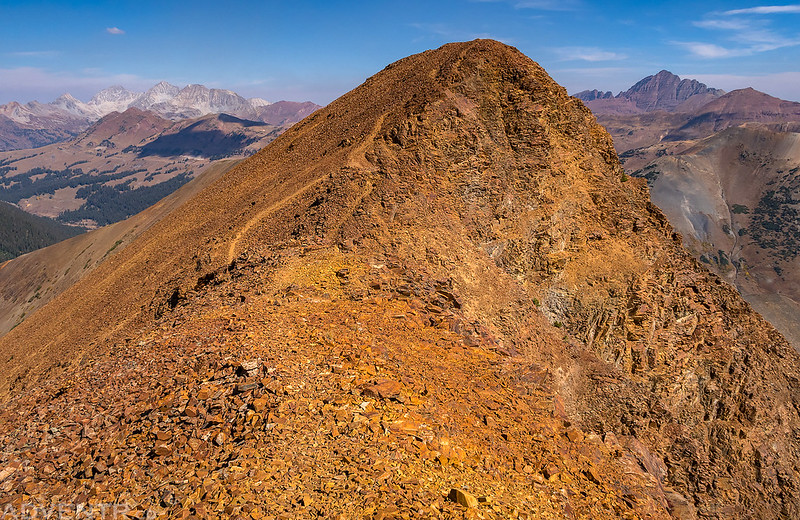 Soon I was on the summit of Mount Baldy, which makes this my 40th summit / highpoint that I have climbed this summer! Earlier this year I had made a goal for myself to try and climb 25 peaks this summer and I quickly blew by that number so I bumped it up to 35. It was nice to hit number 40 since this is probably my last summit of the year. 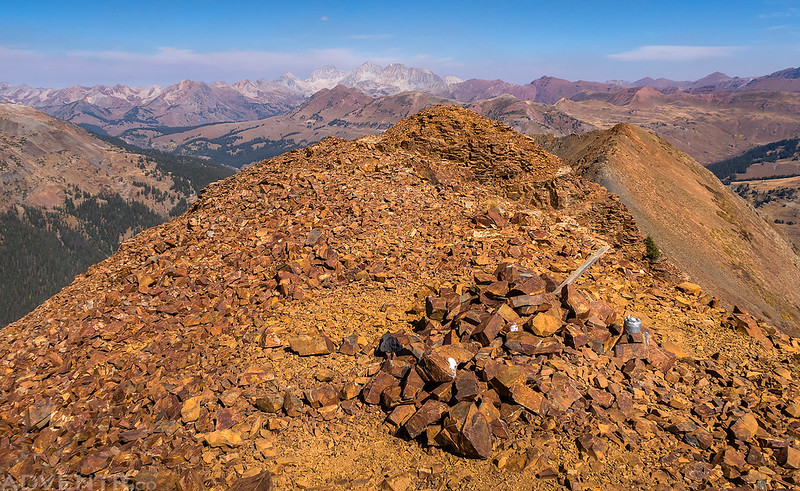 Looking down to Paradise Divide as I hiked back down the ridge to my Jeep. The wind really picked up when I was hiking down from the summit. 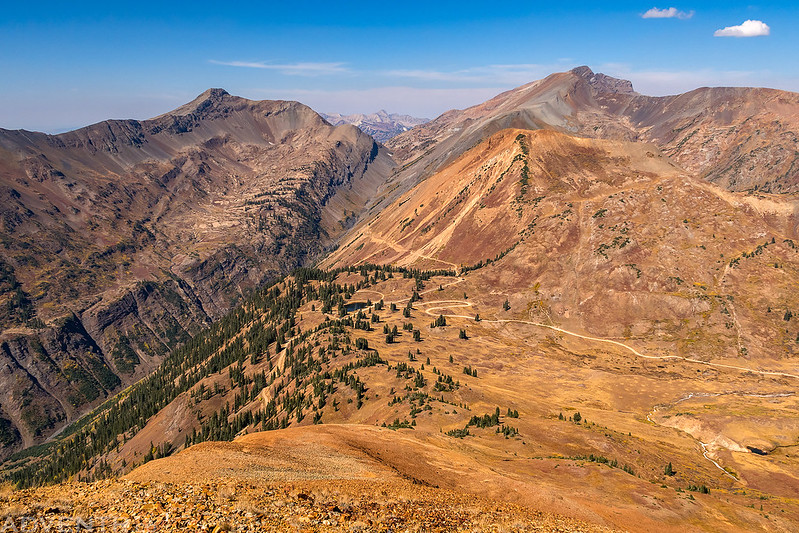 After returning to my Jeep I drove back down to Crested Butte and over Kebler Pass again on my way home. I made one last stop at 133 BRGR in Hotchkiss for lunch and then finished the drive back home. Even though this was only a quick overnight trip, I think I was able to squeeze a lot in!