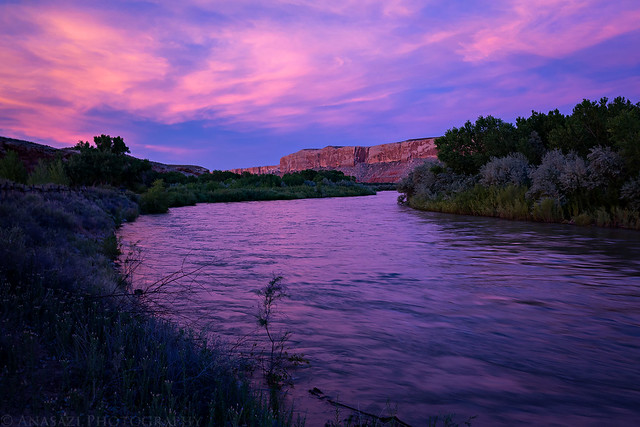 A colorful sunset over the San Juan River from the boat ramp at Sand Island.

Since our trip down the San Juan River didn’t start until Sunday morning, I drove down Friday after work so I could spend most of Saturday hiking to a few sites within Bears Ears National Monument. During my drive down on Friday, I stopped to visit a large boulder covered with petroglyphs and stayed there until sunset. The gnats and no-see-ums at this location were pretty terrible and I was worried about how the rest of the trip was going to be. When the sun was down I headed over to Butler Wash and found a spot to spend the night. While I was getting ready for bed I had left the back windows of my Jeep partially opened with the lights on, and when I looked at the ceiling of my Jeep it was just covered with bugs of many different sizes and shapes. I couldn’t believe how many bugs were out this evening! I was able to lure most of them out of my Jeep with my headlamp and then I drove down the road a little ways with the back windows open to get rid of some more. It was pretty crazy!

A nice boulder covered with petroglyphs that I visited Friday evening on my way to Bulter Wash. 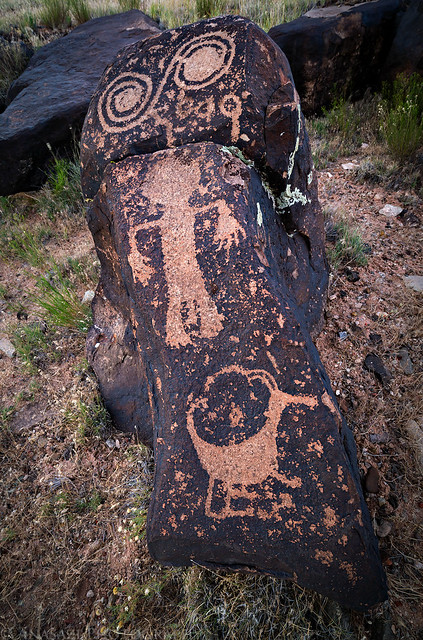 The weather forecast predicted that it was going to be over 100 degrees on Saturday, so I woke up before sunrise and started hiking up to an alcove on Comb Ridge so I could get in some hiking before the temperature started to rise. The temperature was nice this morning, but it was very humid out. I was hoping to visit a nice set of ruins at the end of this hike, but unfortunately I was unable to get across the narrow and exposed ledge to reach them, so I had to settle for viewing them from across the canyon.

Sunrise while hiking up one of the many short canyons found in Comb Ridge. 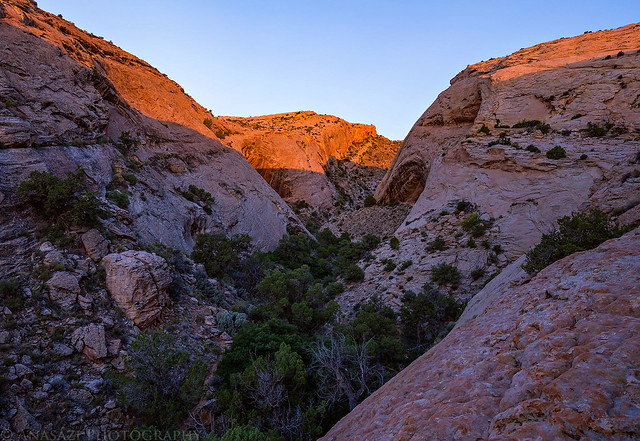 After returning to my Jeep from the early morning hike I needed to drive over to Monument Valley to pick up a permit for our river trip since we forgot to take care of the Navajo permit earlier and we were hoping to camp at Chinle Wash. It was easy enough to get the permit at the entrance booth to the park and then I returned to Cedar Mesa for a little more exploring. I went on a few short hikes in search of a kiva and a few other ruins, but I didn’t have much luck this time. Part of the issue was that it was getting too hot out and I wasn’t really up for aimless exploring in the heat. I will definitely be returning in the fall when it’s cooler out and will hopefully have better luck then.

When I was done hiking for the day I returned to Blanding for dinner and then drove over to an overlook of the San Juan River on Lime Ridge while I was waiting to meetup with my friends at the San Island Campground. We had reserved Group Campsite A and didn’t plan on arriving there until later in the evening with hopes that it would cool down a bit.

An overlook of a rincon from Lime Ridge.

The Mule Ear in the distance and the San Juan River below. 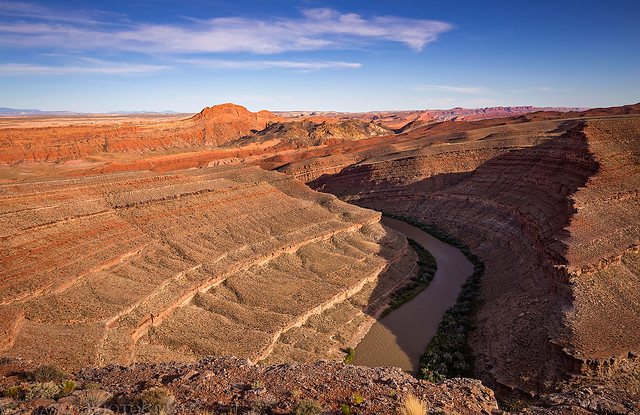 A nice bend in the San Juan River. 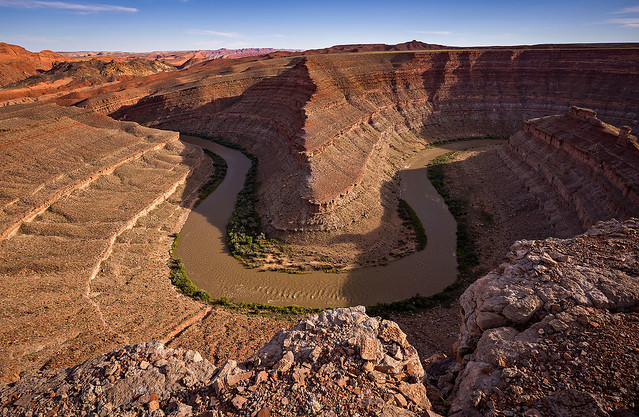 It was still pretty hot out when I arrived at our campsite shortly before sunset. My friends had not arrived yet (they had texted me to let me know they were having dinner in Bluff), so I took the opportunity to get my gear together for the river trip and setup my tent. As I was finishing up, the rest of the group arrived and Steve started getting his boat setup at the ramp. While he was taking care of that we got to watch a nice colorful sunset along the river. As the colors faded Jackson and I ran the shuttle vehicle down to the take-out in Mexican Hat so we could get an early start the following morning. We tried to hang outside at camp for a little while that evening but the mosquitoes were pretty bad, so we ended up in our tents pretty quickly. We hoped that wouldn’t be a problem on the rest of the trip.

A pretty nice sunset along the San Juan River. 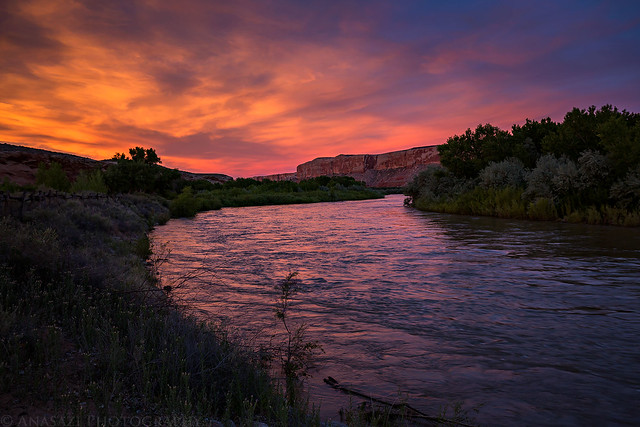 We woke up with the sun on Sunday morning so we could get an early start on the river. The temperature out was nice at this time, but we knew it was going to heat up quickly! After rigging up the boats we were on the river by 9:00am. The San Juan was flowing at 7,200cfs, which was the highest any of us had ever seen it. It was moving swiftly and we were averaging 6-7 miles-per-hour when we were on the river. Because of the fast-moving water we weren’t going to be on the river very long today. 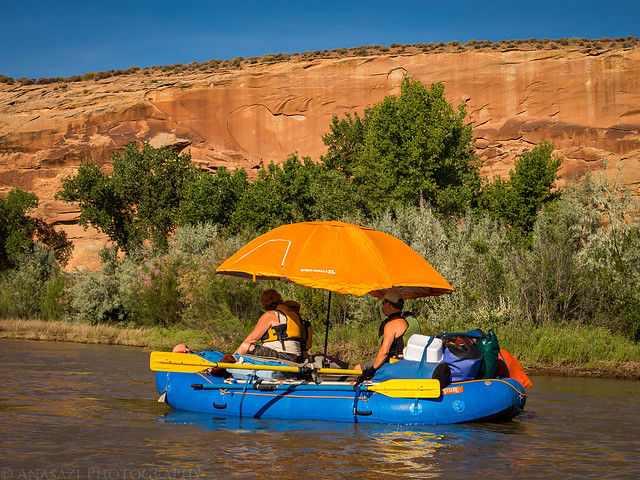 After a few miles on the water we stopped and hiked to the River House Ruin since Chris had never been there before. We saw a few horses along the short trail and spent a little time checking out the ruins and rock art. It was definitely starting to get warm out as we hiked back to the boats.

One of the horses was passed along the trail to River House Ruin. 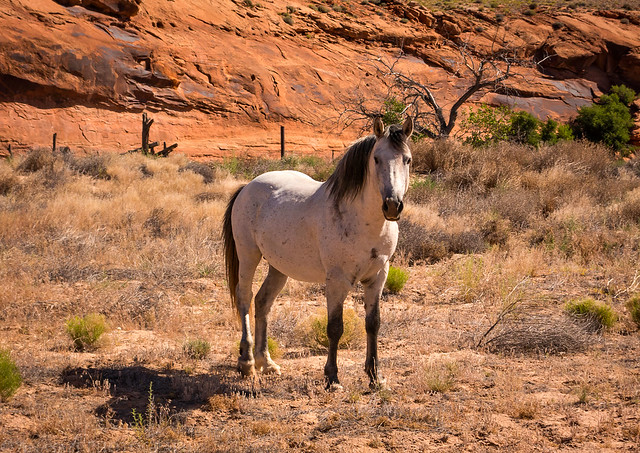 River House Ruin, also known as Snake House Ruin. I’ve been here many times before, but it’s always a nice place to visit. 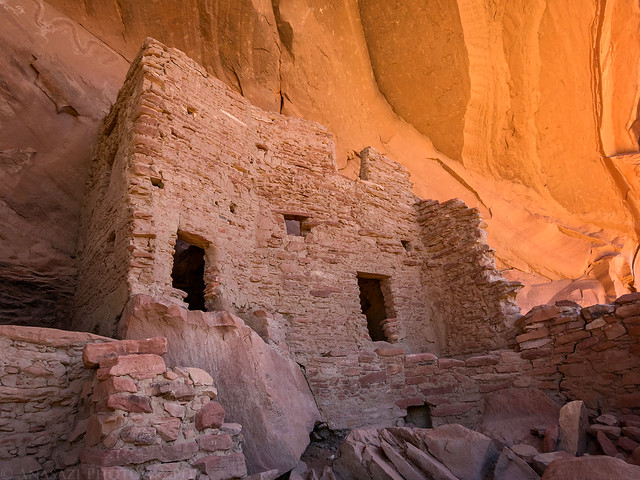 Pictographs above the ruins. 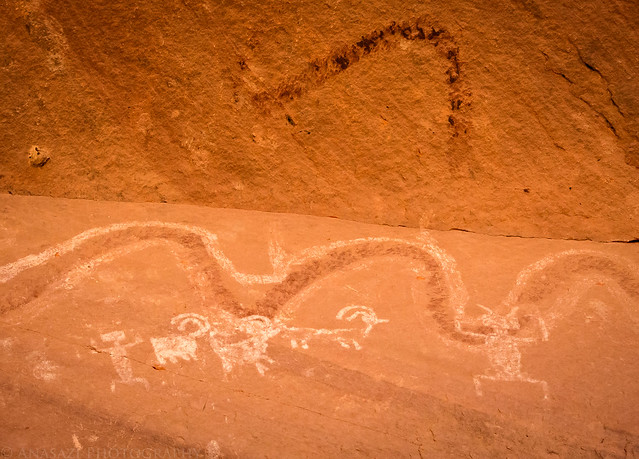 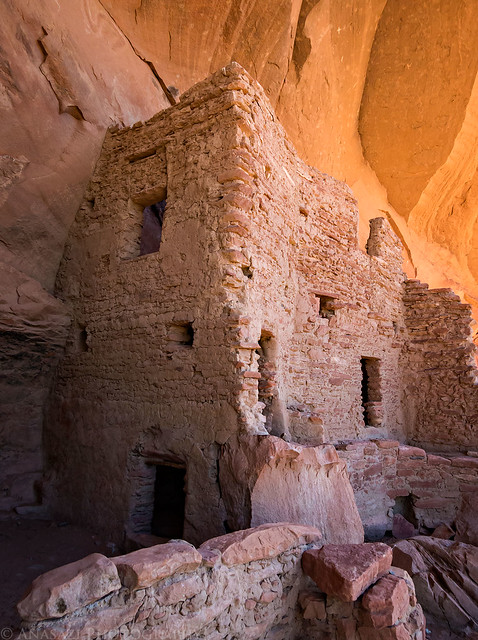 More pictographs on the left side of the large alcove. 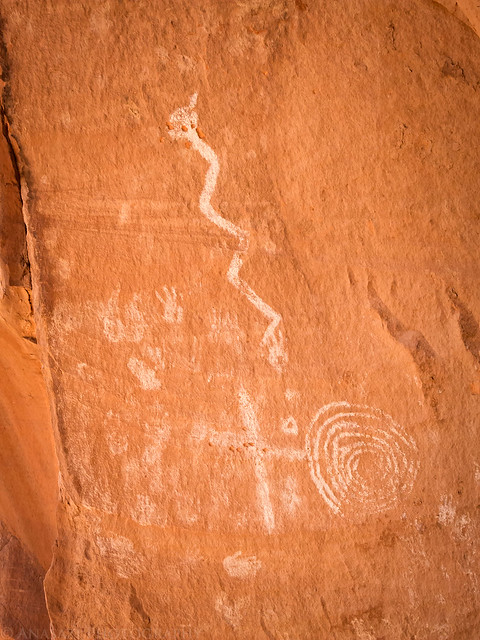 Soon we were back on the river and looking for a campsite. Our hopes were to finally camp at Chinle Wash, but as usual it was already occupied. They were the only group we would see camped along the river during the entire trip. We ended up just downstream at Big Stick Camp, which is where we have camped on all our previous trips, too. At least there were a lot of big cottonwood trees here to provide shade during the day. We setup camp and spent the rest of the day trying to stay in the shade since it was hot out! We would sit in the shade and then wade into the river to cool off and repeat. After trying to stay cool for most of the day we all decided that we didn’t want to spend another full day doing that (especially since the remainder of the campsites along the river would not have good shade), so we decided to cut our trip short by a day and float out the following morning. With the river moving as fast as it was, this would not be a problem.

Back on the river and on our way to find a campsite for the night. 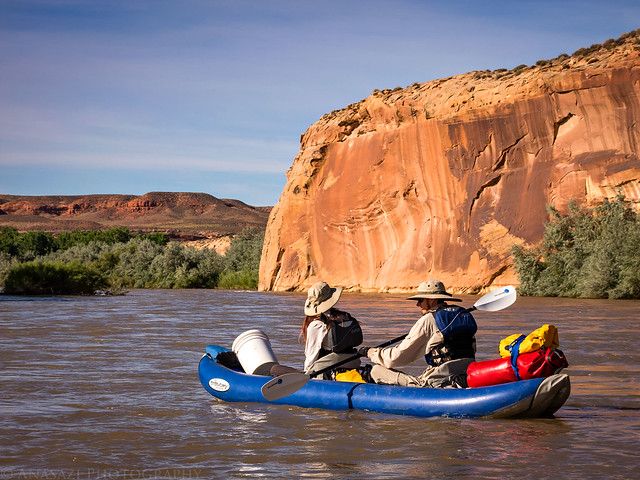 At least our camp had some nice big cottonwood trees that helped shade our tents during the day. 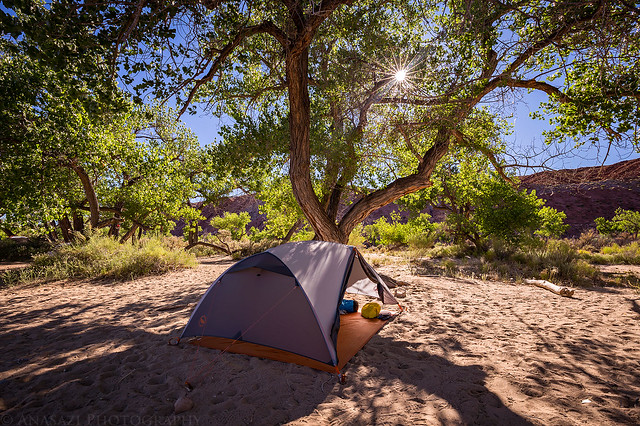 This is where we spent most of the day avoiding direct sunlight and cooling off in the river. 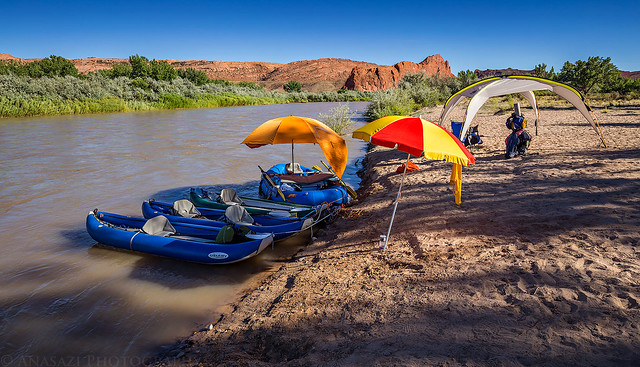 We had chicken fajitas for dinner once it finally started to cool down a little and then went to bed shortly after it got dark out. Thankfully, there were not many mosquitoes at this camp, so we were able to stay out a little longer although the heat during the day had drained our energy so we were pretty tired.

On Monday morning we slept in a little later and then packed up our camp and got back on the river. It only took us three hours to float the rest of the way to Mexican Hat. It was very nice to be out on the river and I knew that if we could have stayed on the water longer throughout the days we wouldn’t have had to cut our trip short, but with the flow of the river that really wasn’t an option this time. 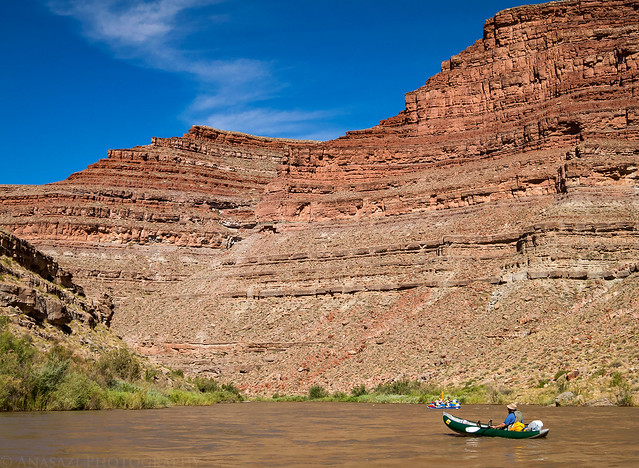 Chris in The Narrows. 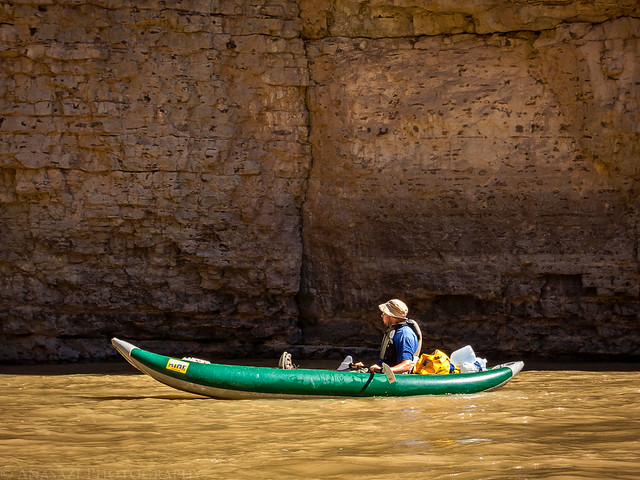 Th view from my boat as we got closer to Mexican Hat. 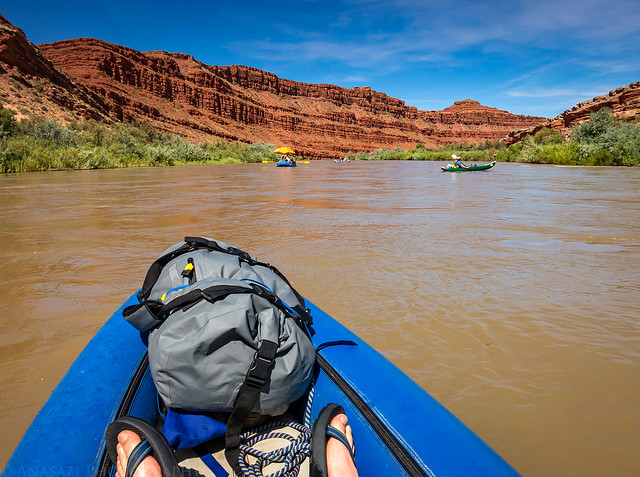 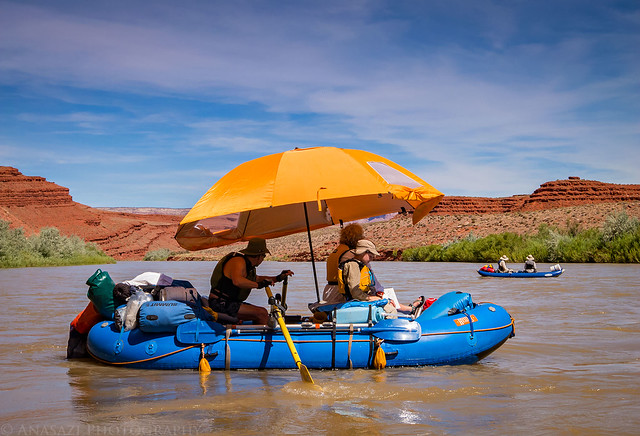 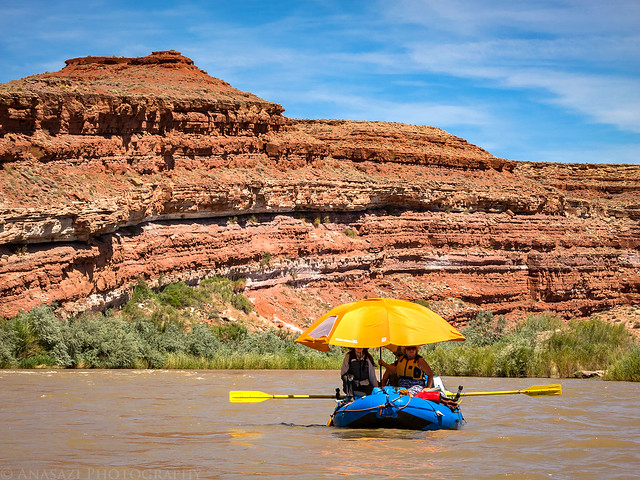