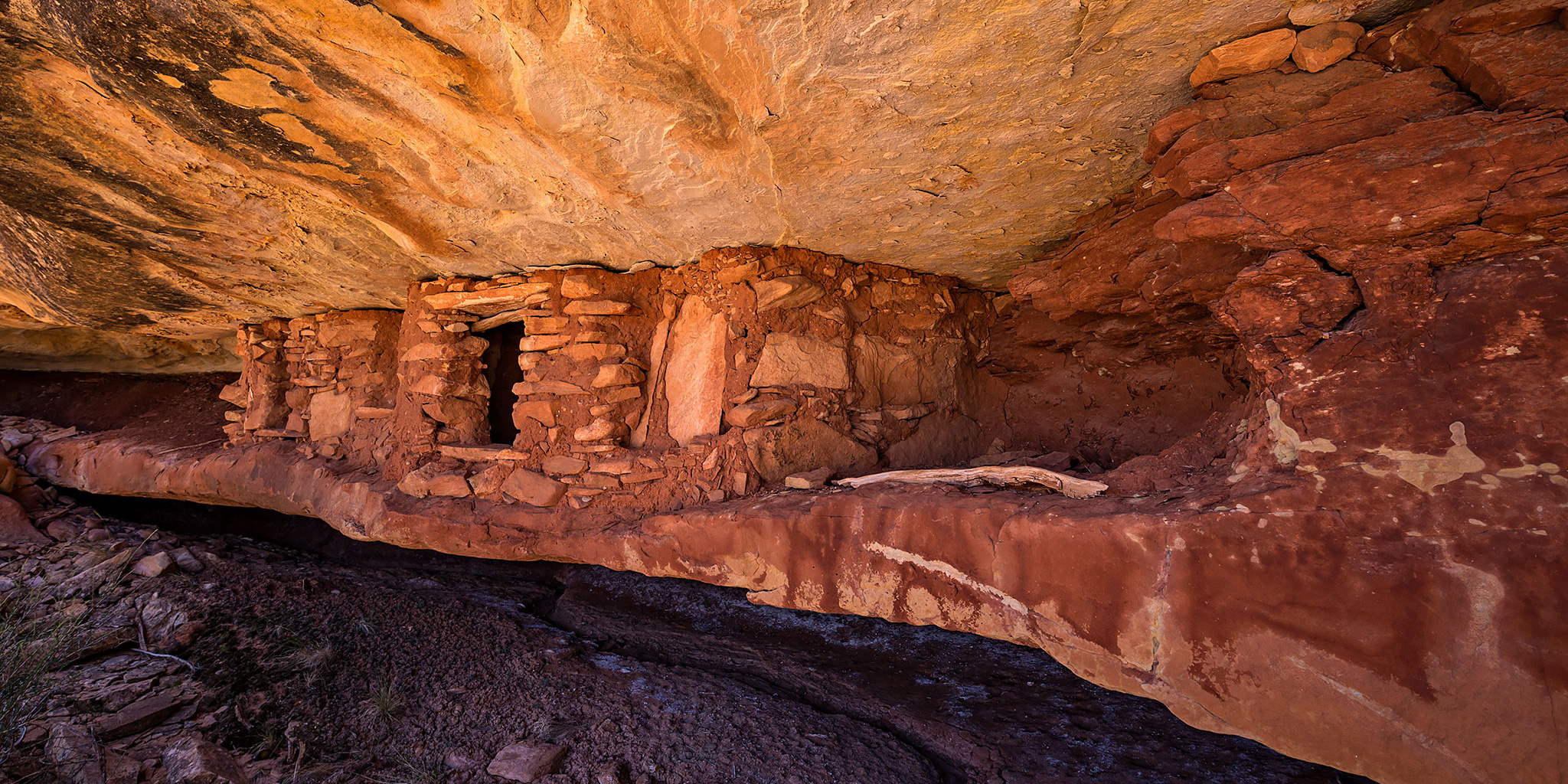 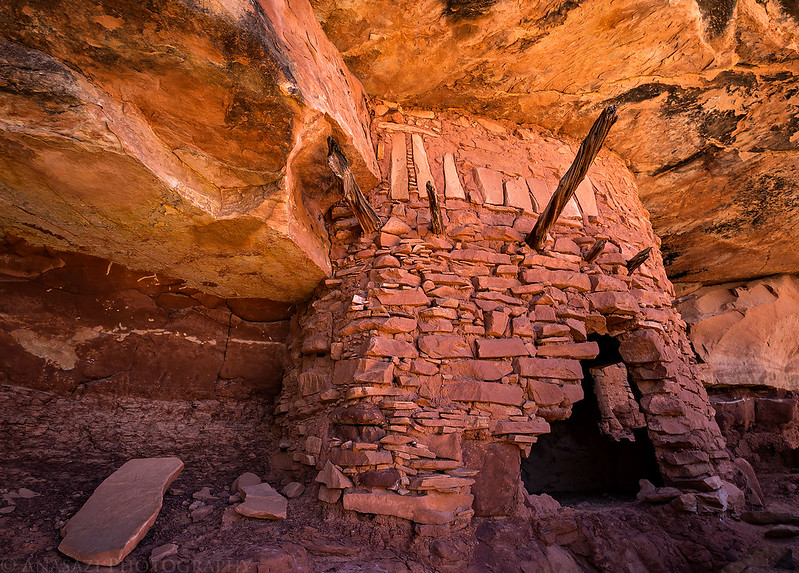 I left work on Friday and drove down to our meeting spot and campsite in Comb Wash about an hour before sunset where I was able to catch up with John for a bit while we waited for Alan and Jerry to return from a hike. The temperature was starting to cool down when I arrived, the wind was not too strong, and there were no bugs around at this location, so it turned out to be a very nice evening. We stayed up much later than I typically do, but I slept well until the sun came back out and woke me up on Saturday morning. After coming up with a game plan for the day we visited a small granary and then headed over to Bluff for breakfast at the Twin Rocks Cafe. Unfortunately, John had decided that the temperature was going to be too hot for him to hike this afternoon, so he headed back home after breakfast. After parting ways with John we drove up onto Cedar Mesa and spent the rest of the afternoon hiking to a few ruins and exploring some small side canyons. We found a campsite on Cedar Mesa later in the evening, had dinner and went to bed earlier than the previous night. Unfortunately, the cedar gnats were out and annoying at this campsite. They were certainly not the worst I have seen, but I could have done without them and while it was still a bit windy this evening, it wasn’t enough to keep them away. On Sunday morning we slept in a little later than the previous day, Jerry made us breakfast burritos for breakfast and then we went off on one more hike to visit some very nice ruins before it was time for me to head back home. Here are a few photos from the weekend… 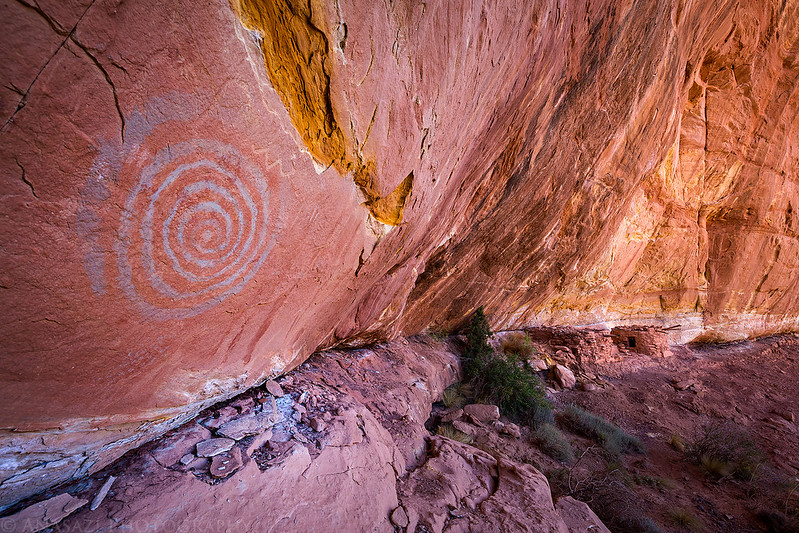 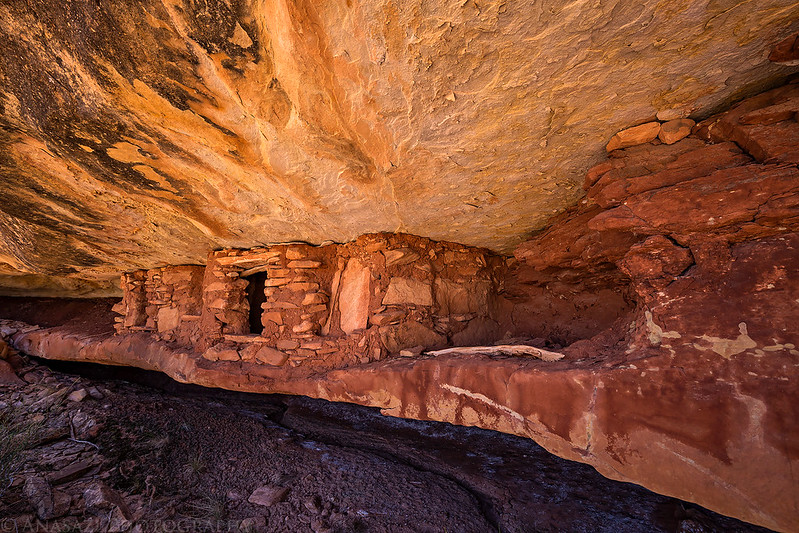 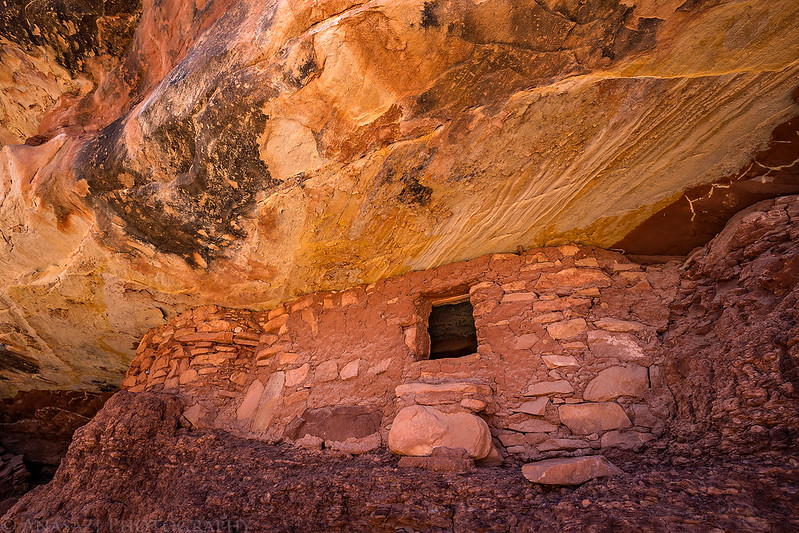 Alan taking a photo of The Temple. 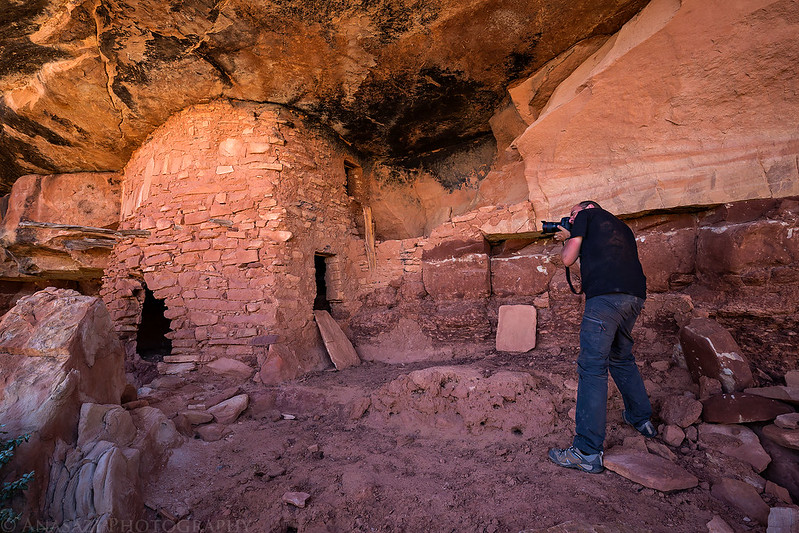 A very small granary we found while exploring. 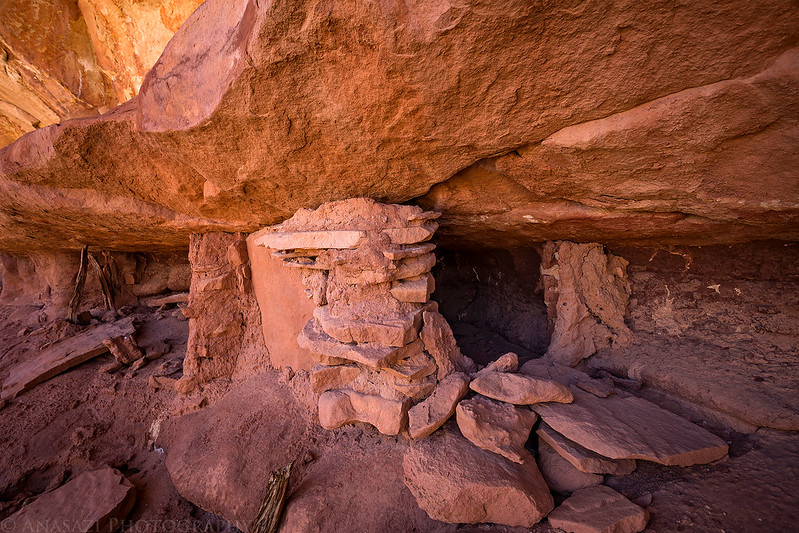 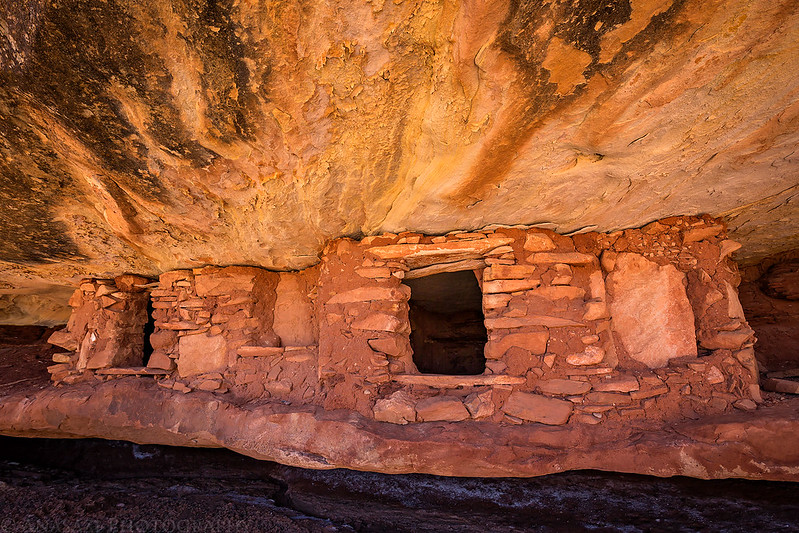 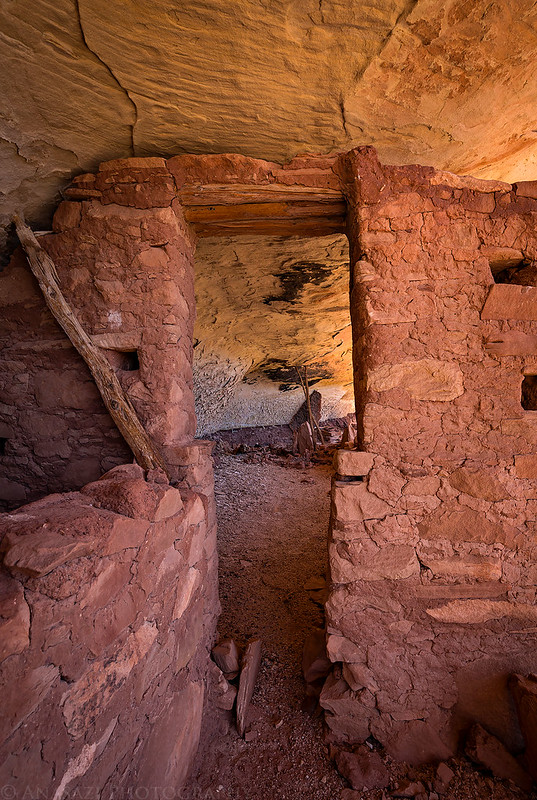 At the edge of a canyon… 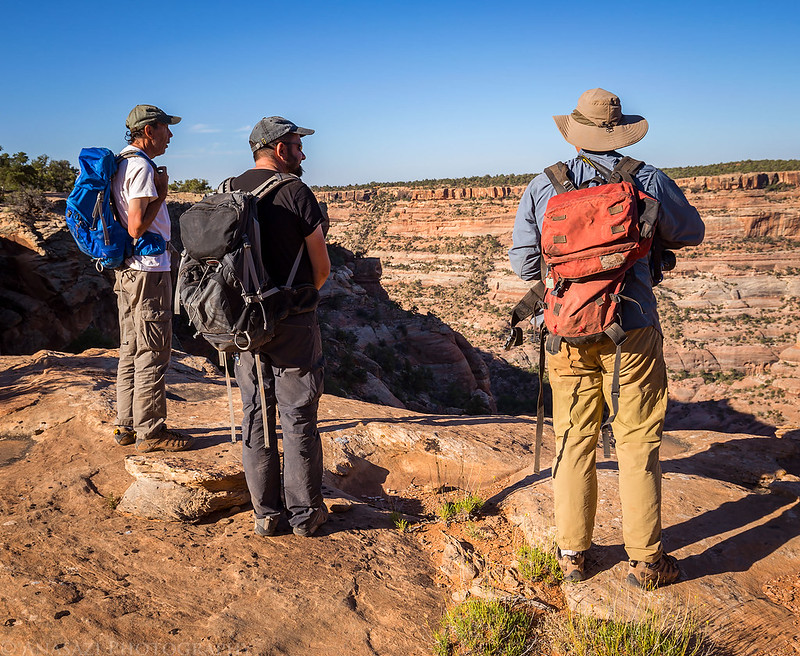 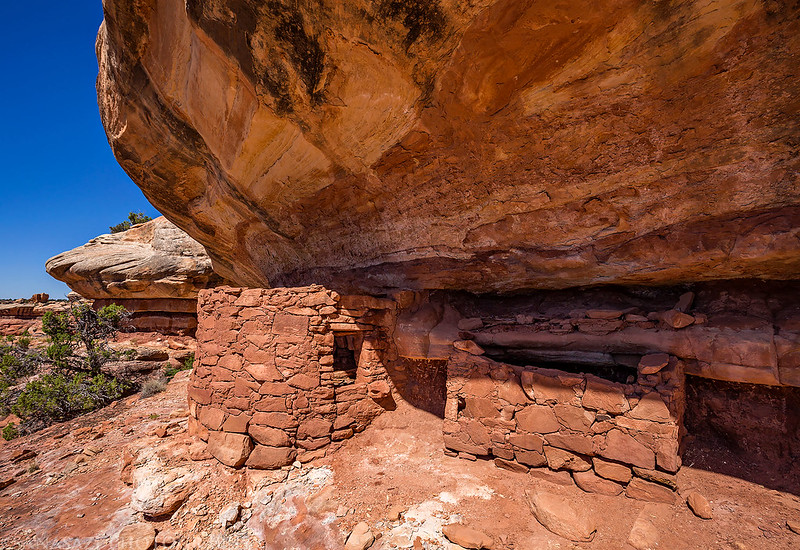 There was some nice color in this alcove… 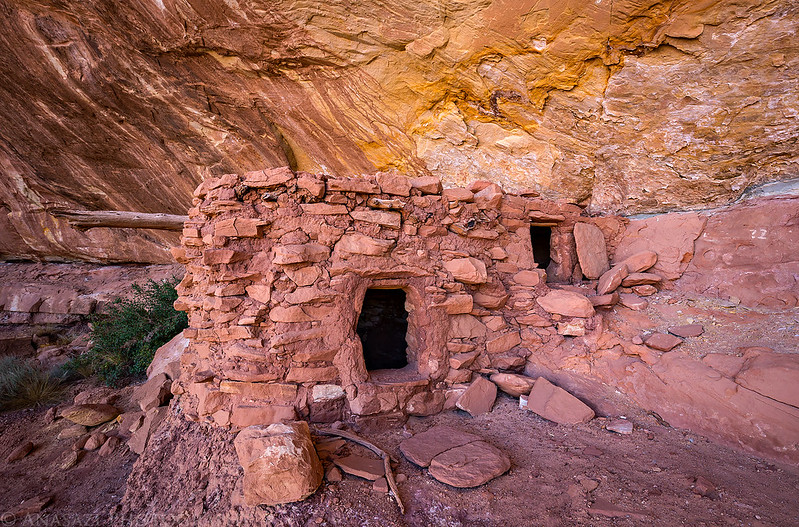 Alan taking a photo of the Blue Spiral Ruins. 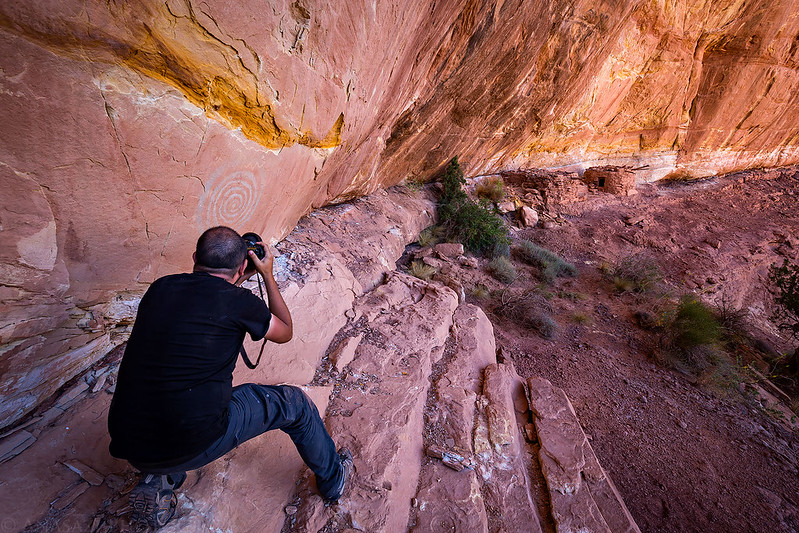 This granary had a very nice roof on it. 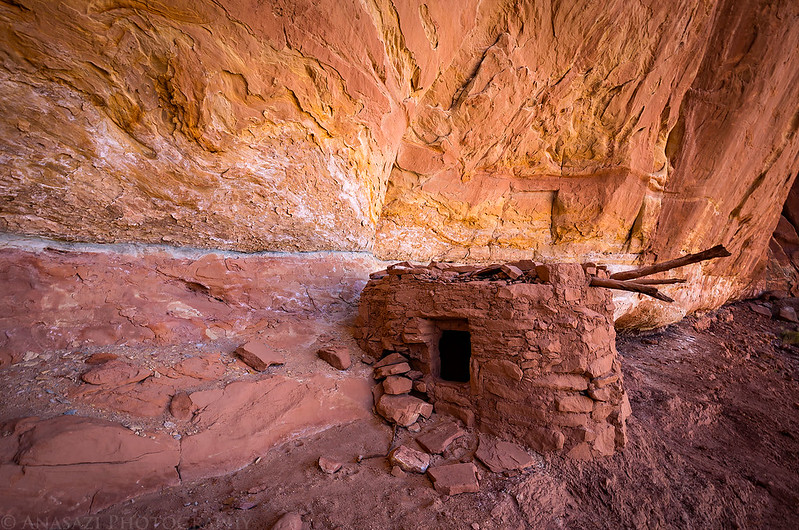 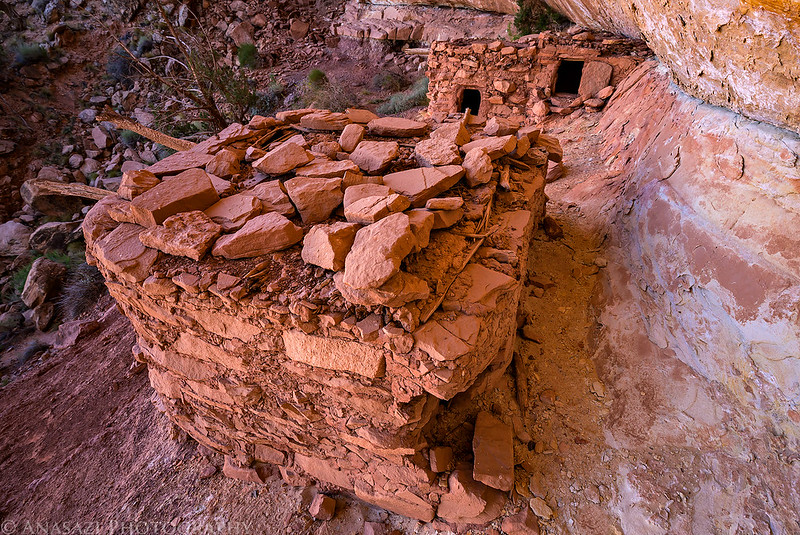 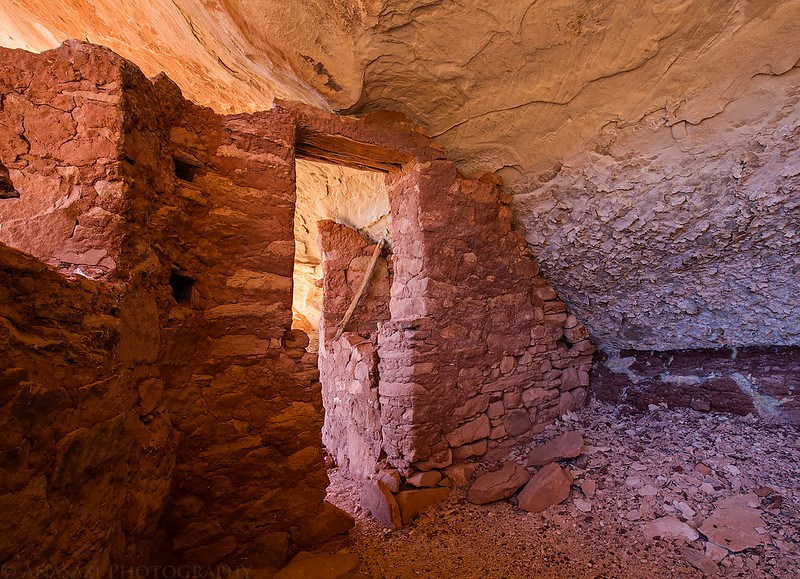 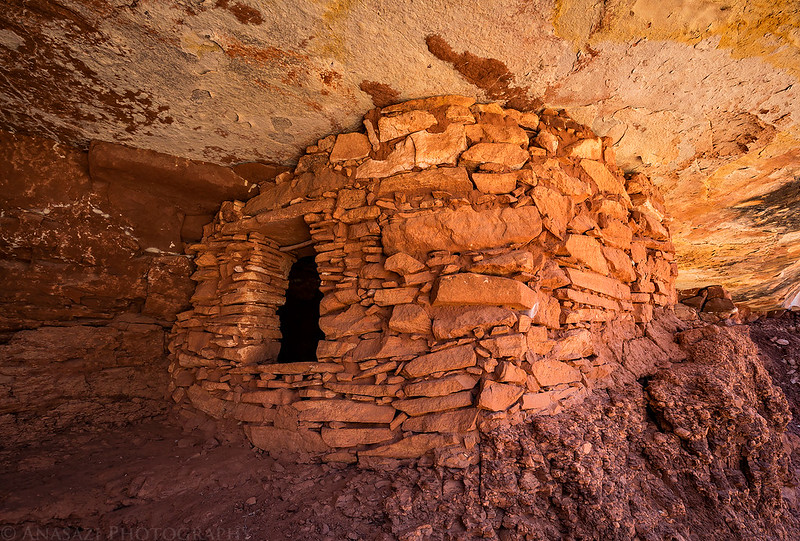 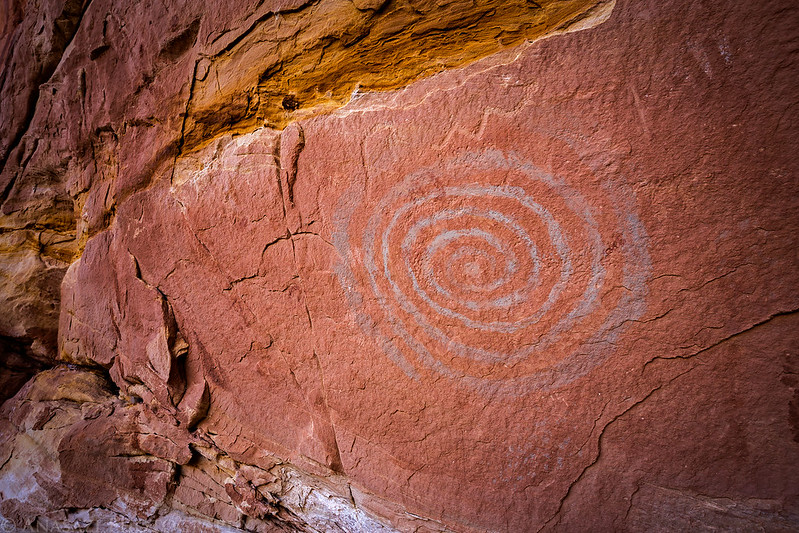 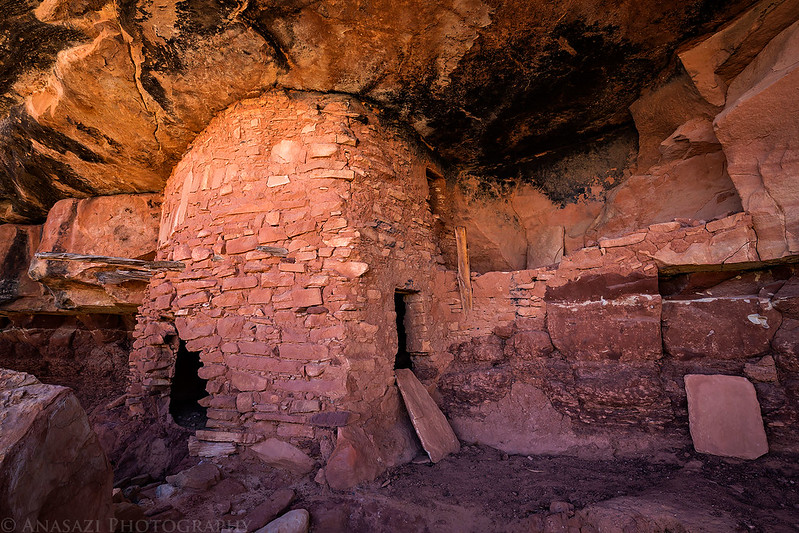 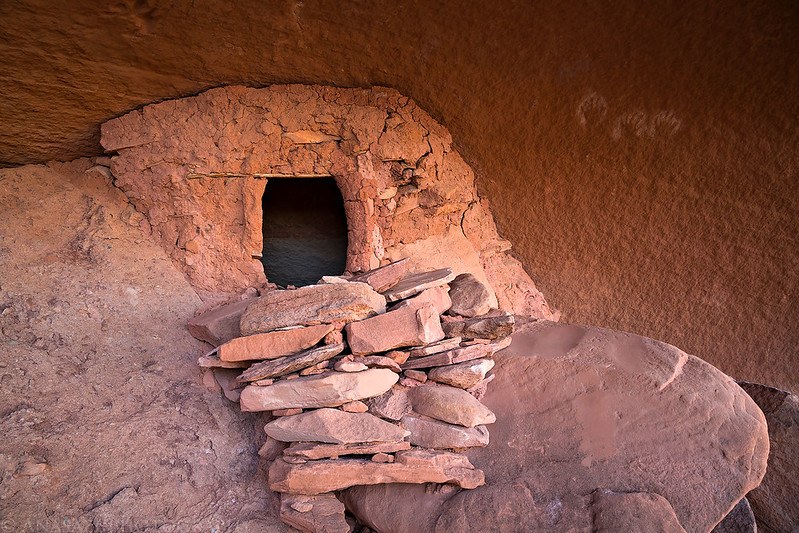 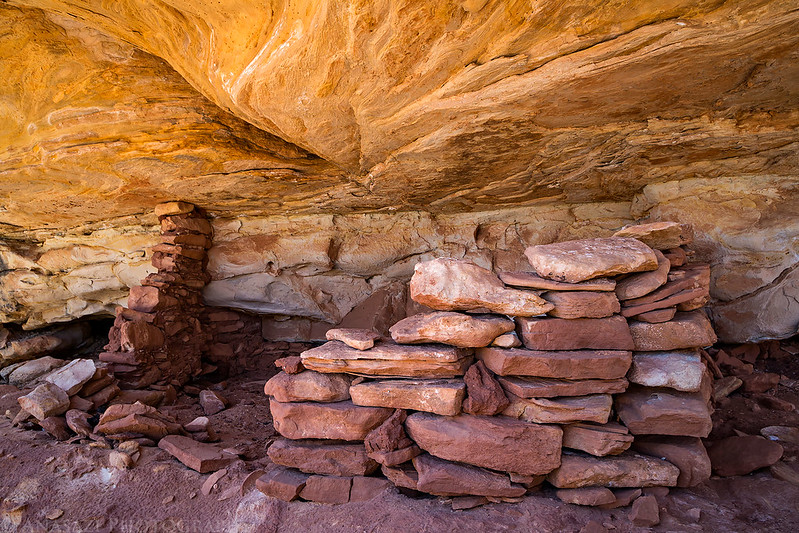 I just loved how these structures were built up on this ledge. Very cool! 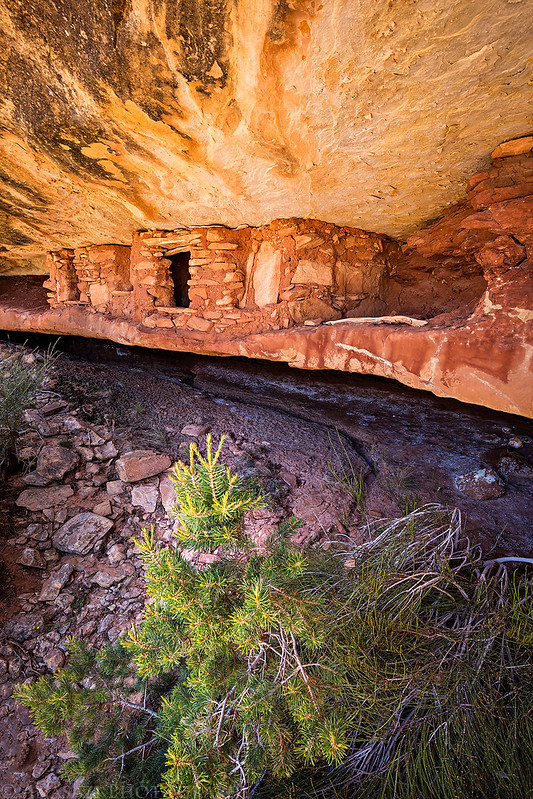 Nice ruins in a big alcove. 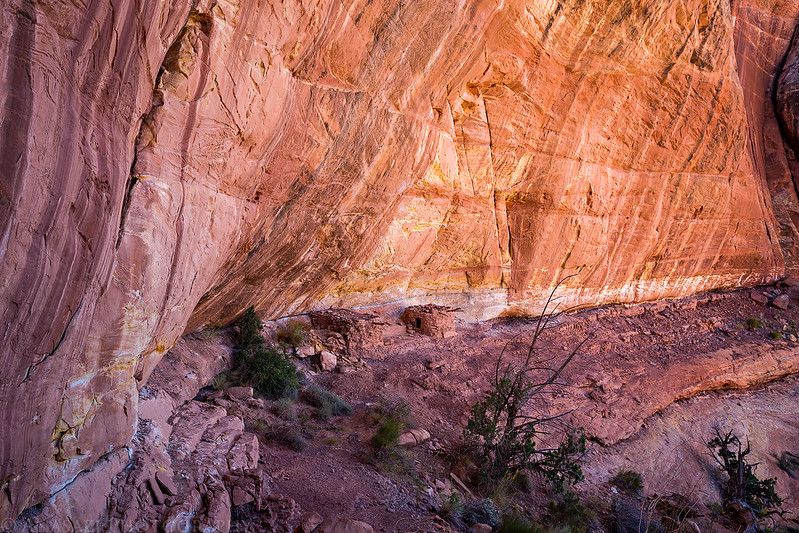 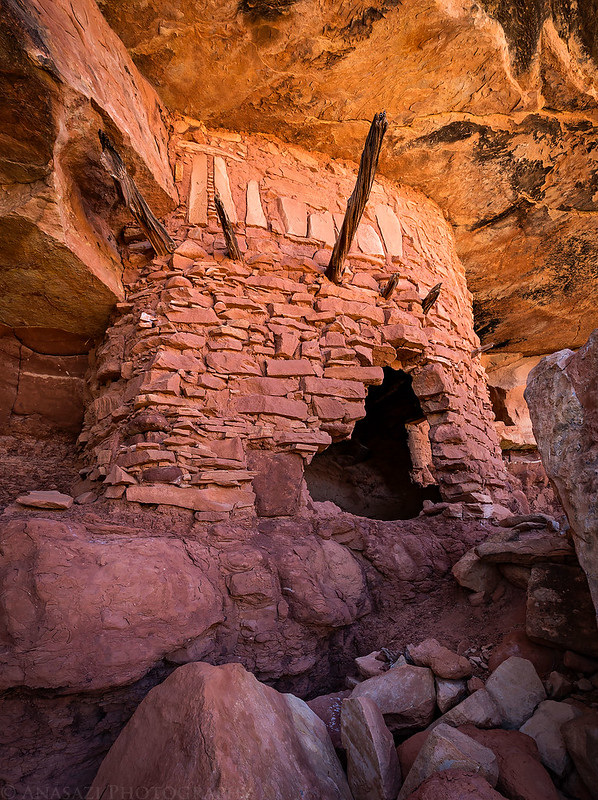 Alan took this photo with my camera since I couldn’t get across the narrow ledge to reach it. 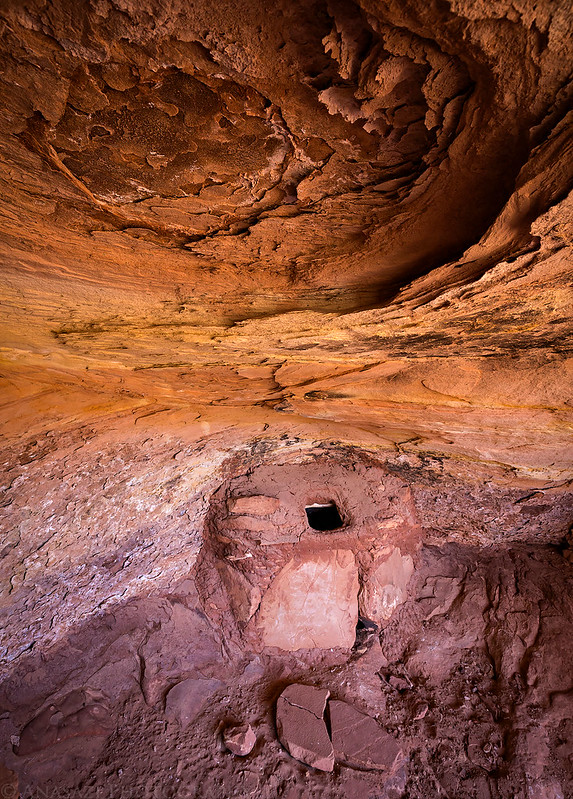