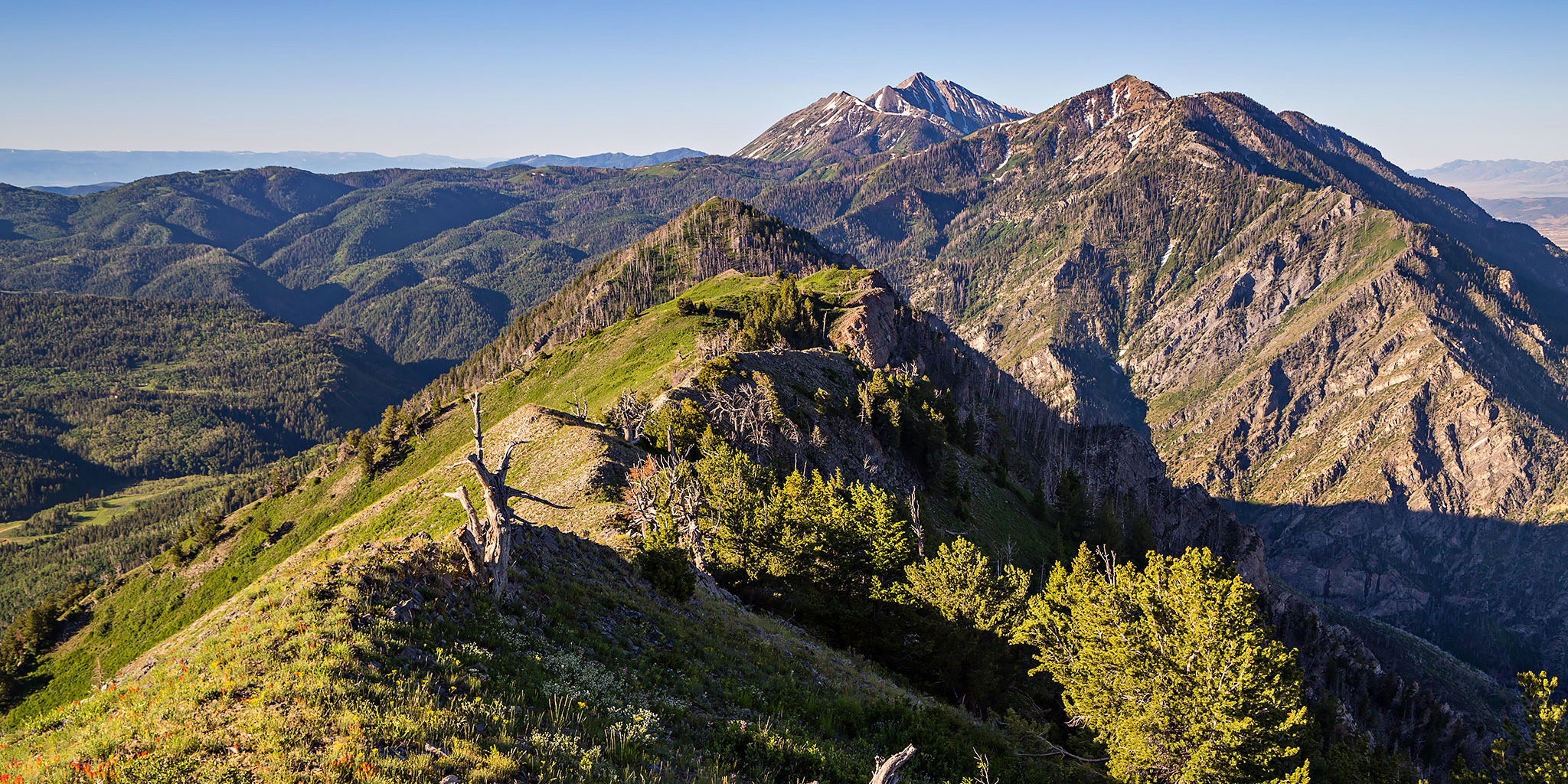 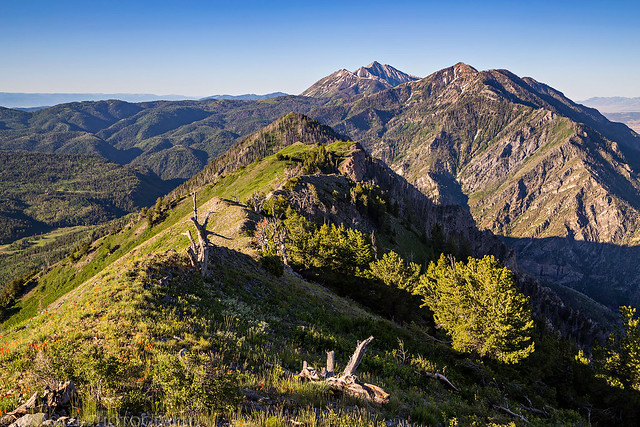 A view from near the summit of Dry Mountain over to Bald Mountain and Mount Nebo.

That’s Dry Mountain on the left as I took the road into Santaquin Canyon. 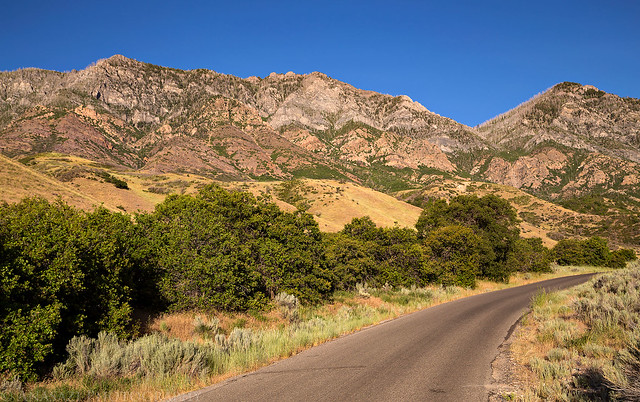 I left work on Friday afternoon and drove straight to Spanish Fork where I had dinner before continuing on to Santaquin and followed the road up Santaquin Canyon to the trailhead. There were a lot of cows walking along the narrow road in places which really slowed things down, especially since some of them didn’t want to move out of the way. Being the start of a holiday weekend there were a lot of people camping in the area, but I managed to find one last open spot in Santaquin Meadows to setup camp for the night. Since I had a little time before sunset, I went for a short hike up the beginning of the trail before returning to camp and going to bed early.

My Jeep parked at the campsite in Santaquin Meadows. 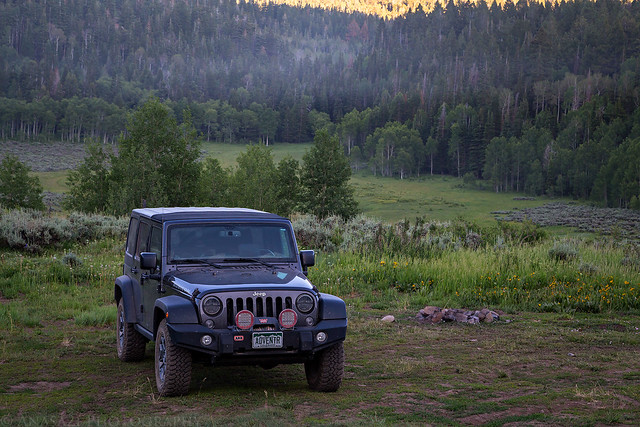 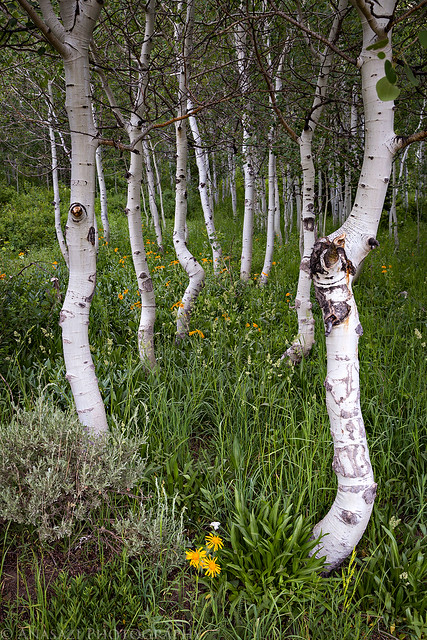 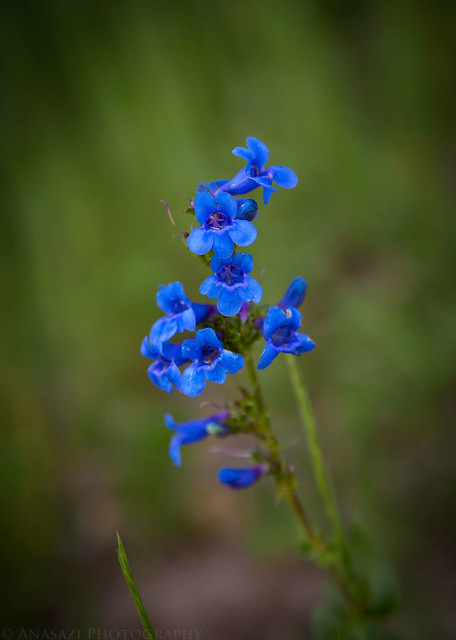 I woke up before sunrise on Saturday morning, drove the short distance to the trailhead and started hiking in the soft dawn light. As I was nearing the saddle of Dry Mountain, I watched the sunrise over Santaquin Peak (10,685) and then I followed the ridge the rest of the way to the summit. There were a lot of wildflowers out and so were the bugs, but luckily nothing that was biting. It took me a little under two hours to reach the summit, which seems to be my typical speed when gaining elevation. I sat on the summit and enjoyed the view over Utah Valley for a while before starting the descent. On the way back down I did pass two hikers that were on the switchbacks to the saddle, and those were the only people I would run into on the trail.

Starting the hike on the Sheepherder Hill Trail. 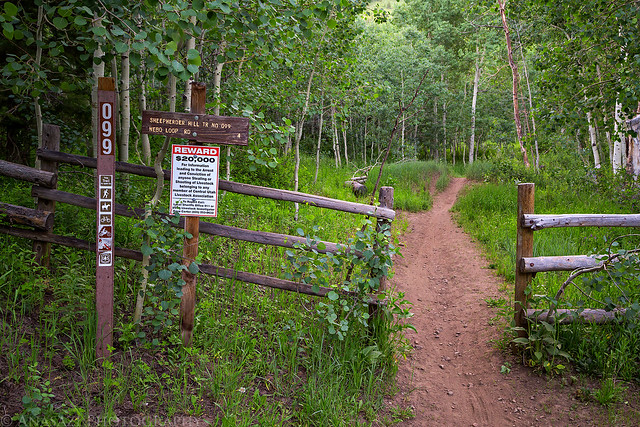 After a short distance I left the main trail and followed a side trail that switch-backed up to a saddle on Dry Mountain. 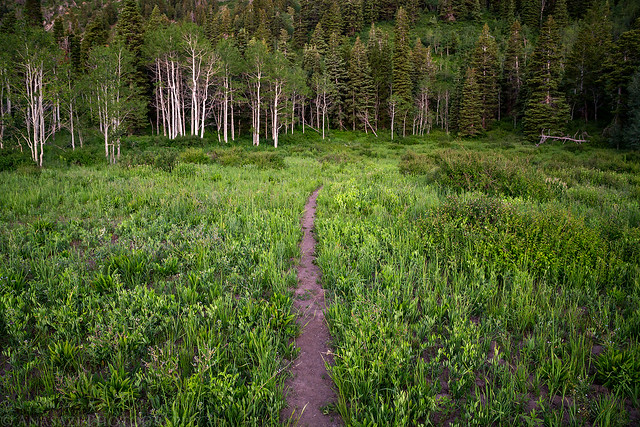 The first light of the day strikes the unnamed peak ahead of me (part of Dry Mountain) as I neared the saddle. 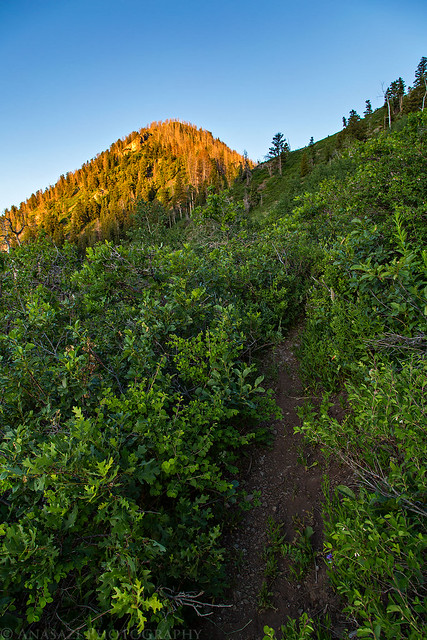 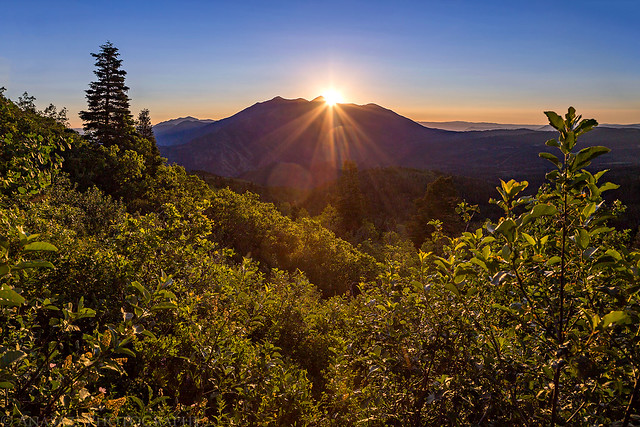 Richardson’s Geranium along the trail. 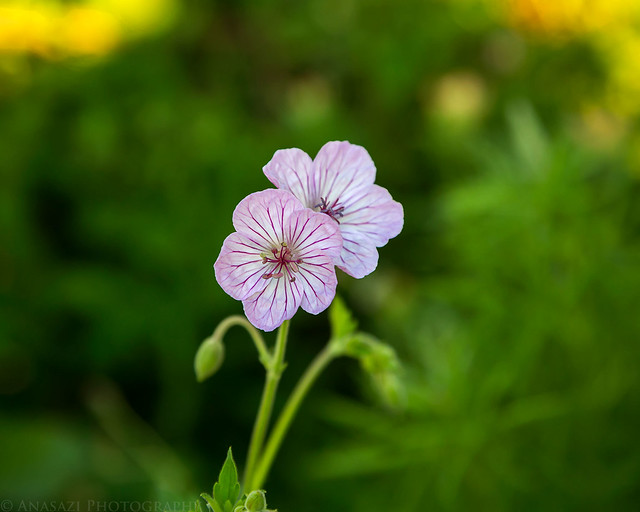 Following a faint trail along the ridge of Dry Mountain. 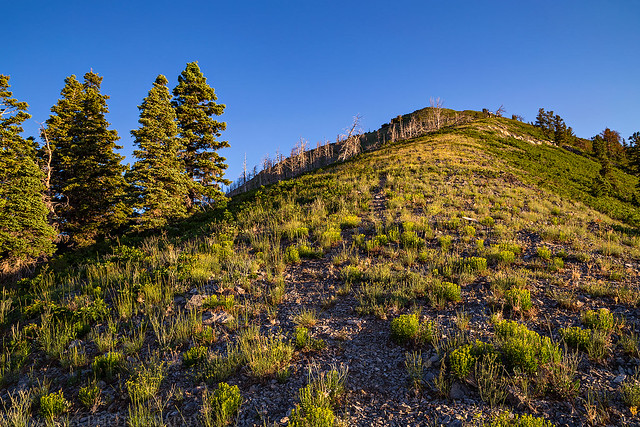 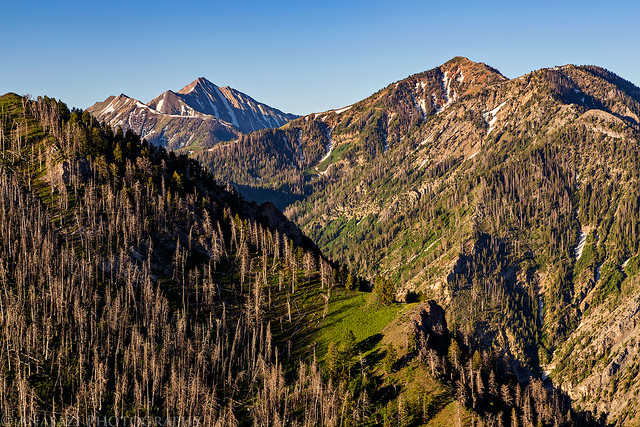 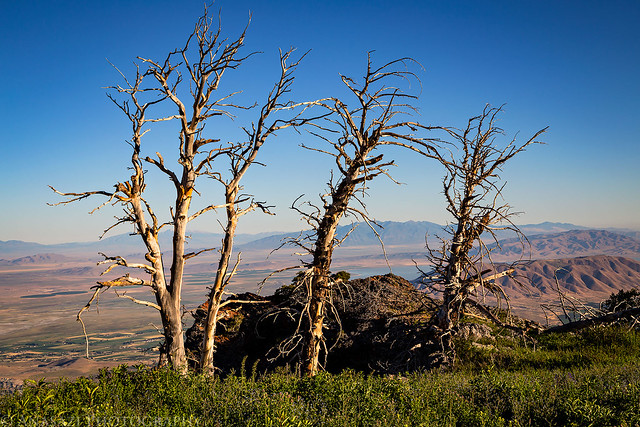 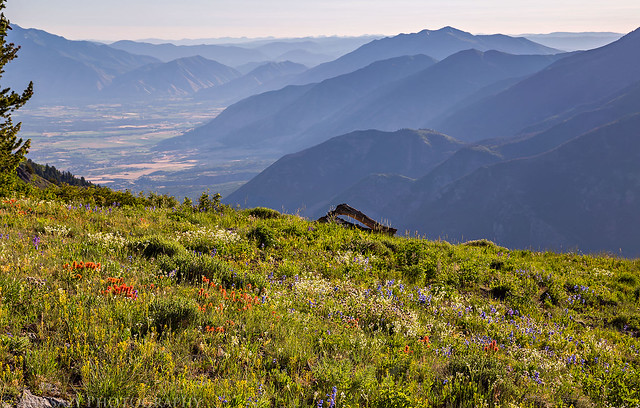 Following the ridge to the summit… 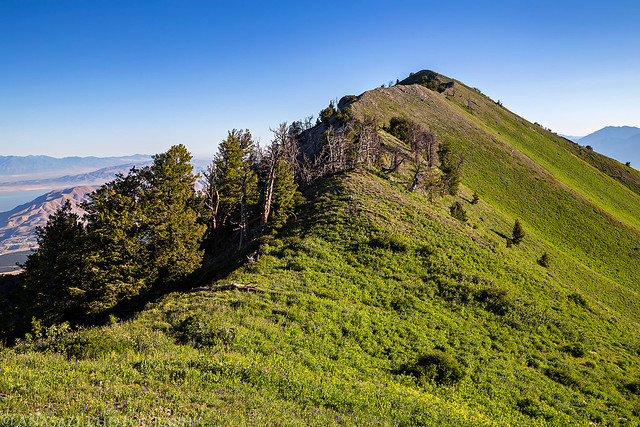 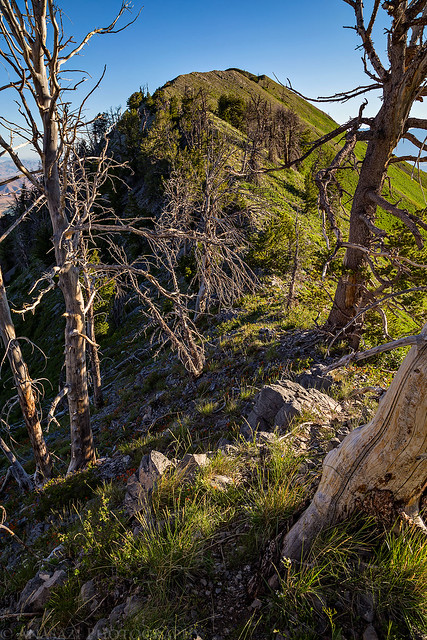 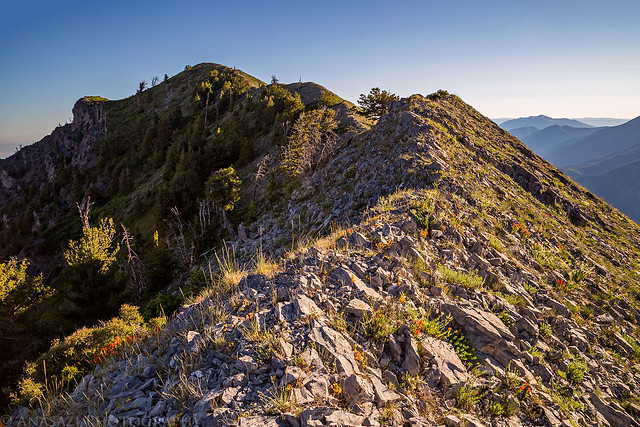 The view from the summit toward Utah Lake. 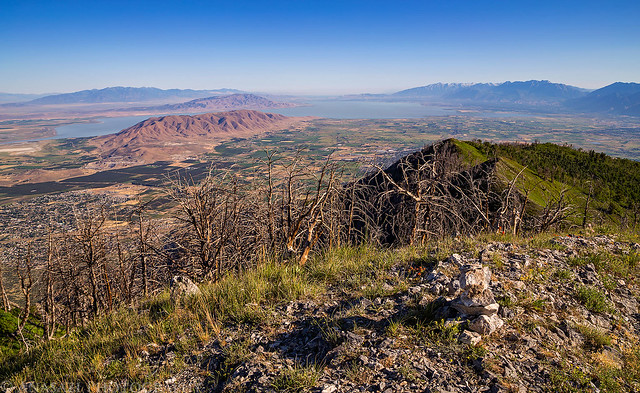 Following the ridge back down… 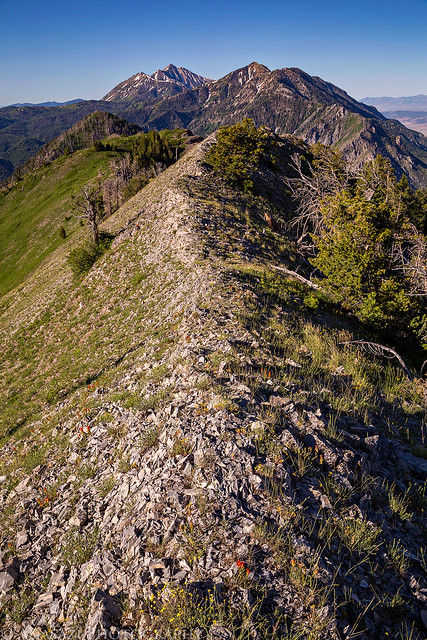 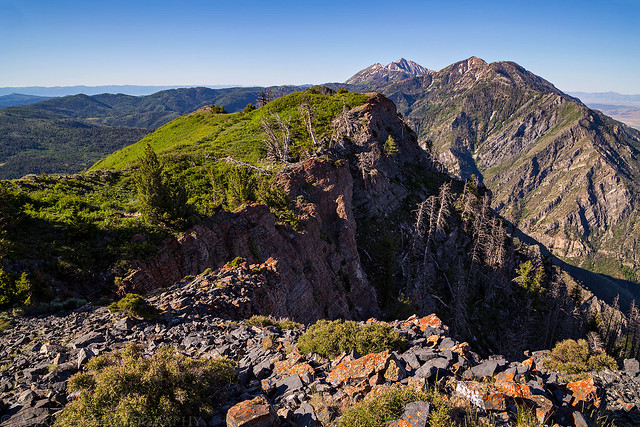 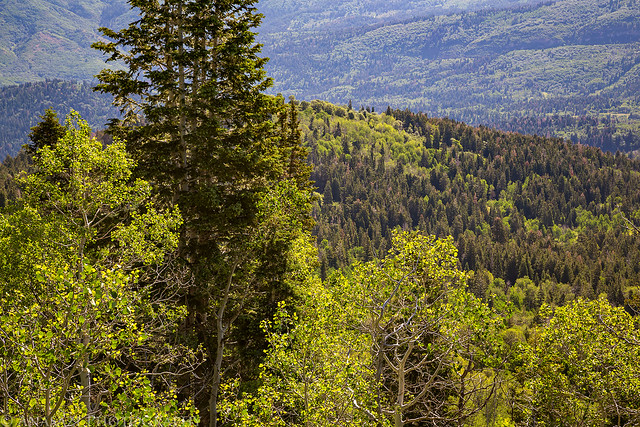 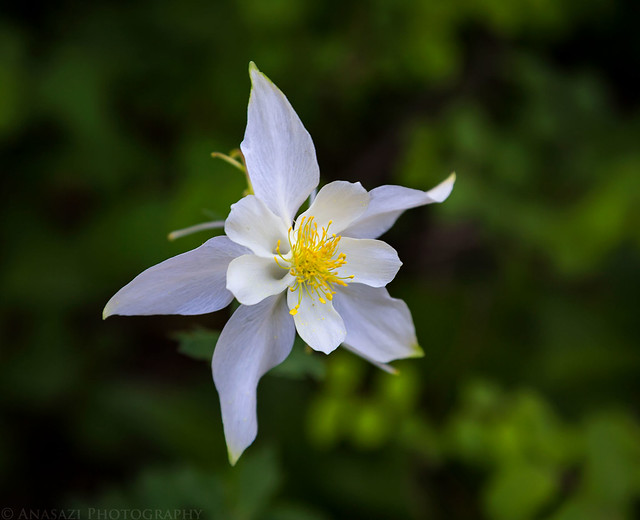 After returning to my Jeep at the trailhead I drove over to the Nebo Loop Scenic Road which I followed around Dry Mountain back to Payson. Then I finished the drive to Salt Lake City, checked into my hotel and rested for the remainder of the evening until the concert. 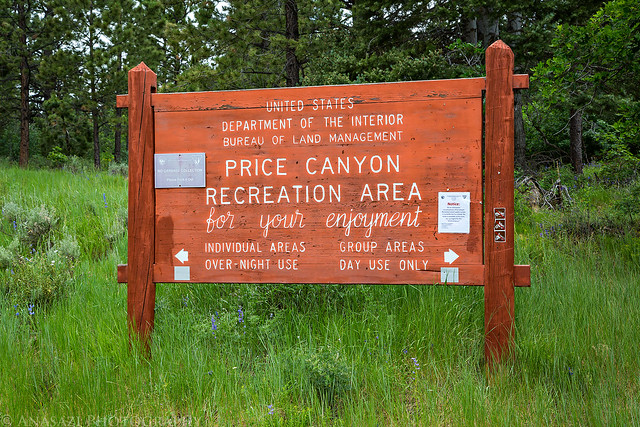 I left Salt Lake City late on Sunday morning after an early lunch at In-N-Out to start the drive home. I was hoping to get in a short hike along the way, so I had asked Dennis earlier in the week for a suggestion. He recommended that I check out the trail in the Price Canyon Recreation Area that goes up onto Ford Ridge. It looked like a good option that was right along my route home, so I decided to give it a try. I arrived at the trailhead around noon and found myself the only one in the area. The sun was out when I got there and it was a bit warmer out than I would have liked, but I decided to go anyway. Luckily, about fifteen minutes after starting the hike some darker clouds moved into the area and blocked out the sun. A gentle breeze started to blow and it was actually pretty nice out. There were even a few sprinkles of rain. I hiked about one and a half miles to the first high point on the ridge and then returned the way I had come. It was a nice way to break up the drive back home.

The start of the trail. 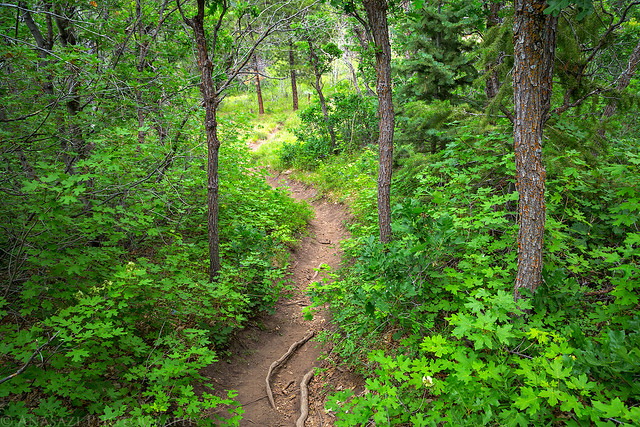 The high point on Ford Ridge above Crandall Canyon. 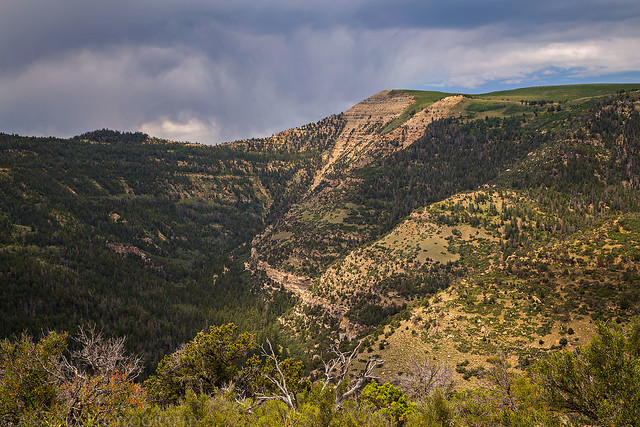 Little yellow wildflowers along the trail. 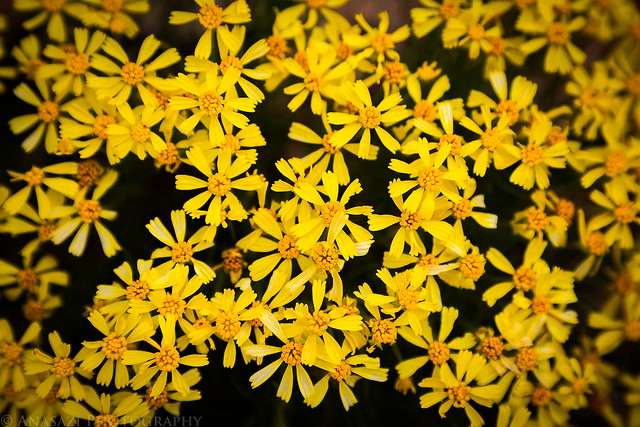 Dark clouds moving into the area. 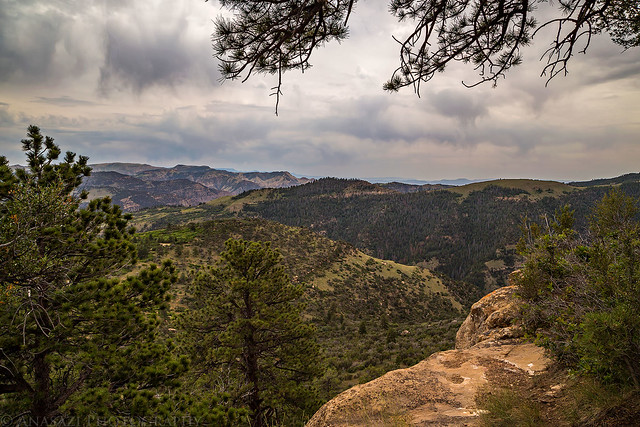 Hiking along the top of the ridge to the first high point. 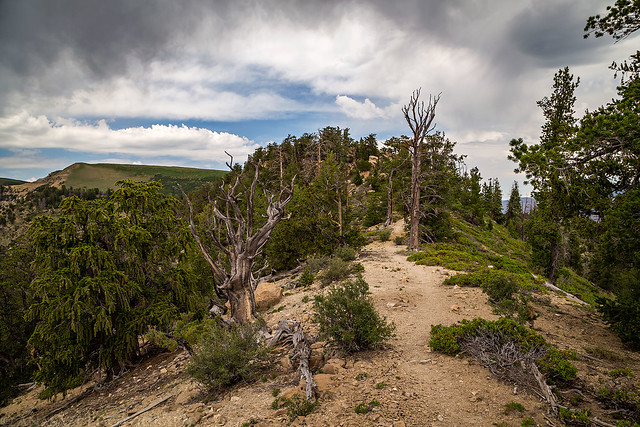 Below is a map and GPS track of my hike up to the summit of Dry Mountain, in case you would like to try it for yourself!