Before starting our drive to Wyoming on Saturday morning, there was a nice sunset in Grand Junction Friday evening. When I noticed that the sunset was looking to be a good one, I took a short drive to the base of the Book Cliffs to try and get some photos. I got a few nice shots despite the fact that the biting gnats were out in full force!

Rays of sun break free from the clouds over the desert. 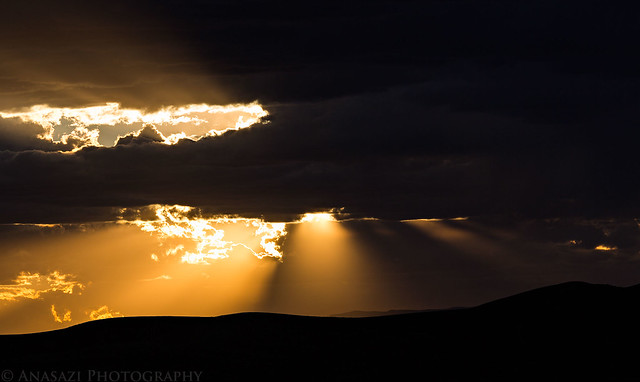 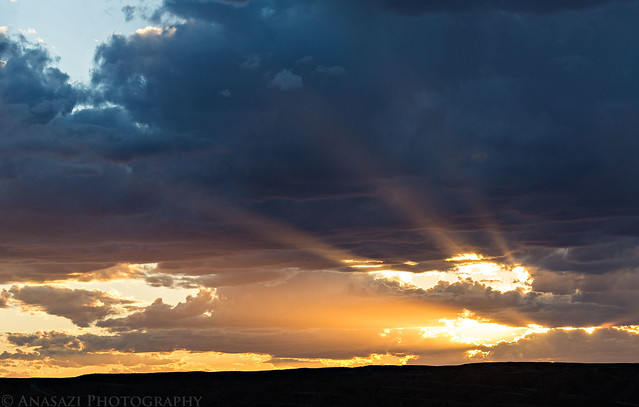 Exploring the Grand Junction Desert in my Jeep at the base of the Book Cliffs. 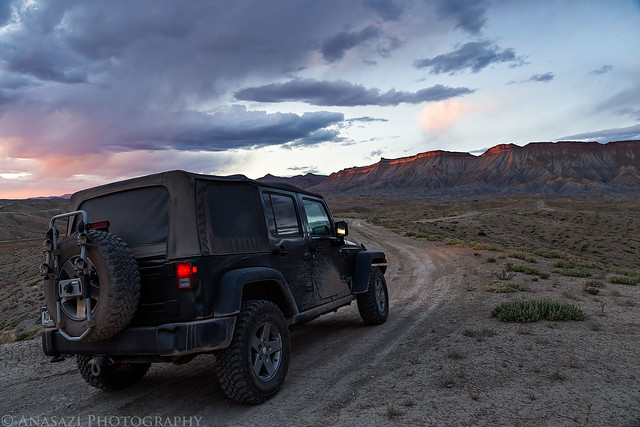 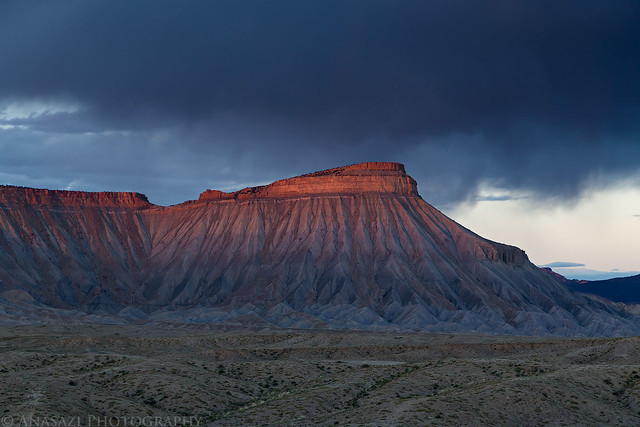 Nice subtle pinks and blues in the sky this evening. 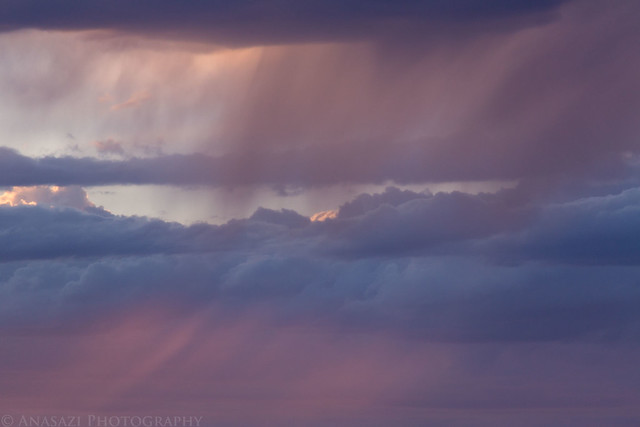 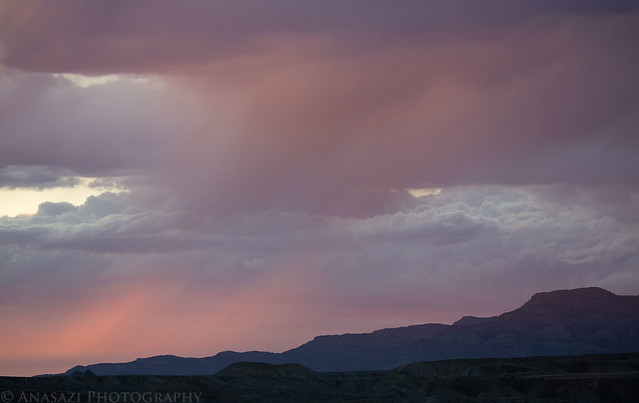 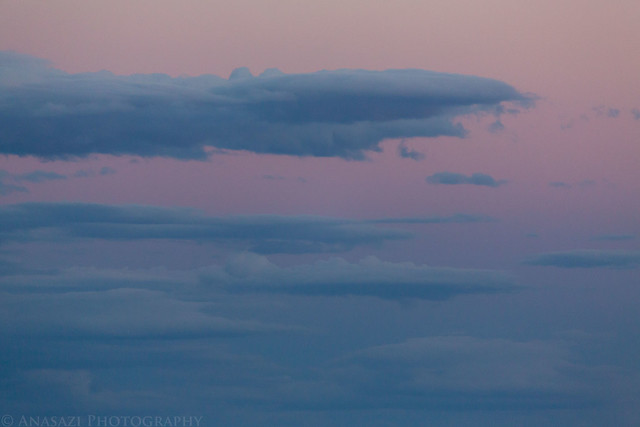 Clouds surrounding Mount Garfield after the sun was down. 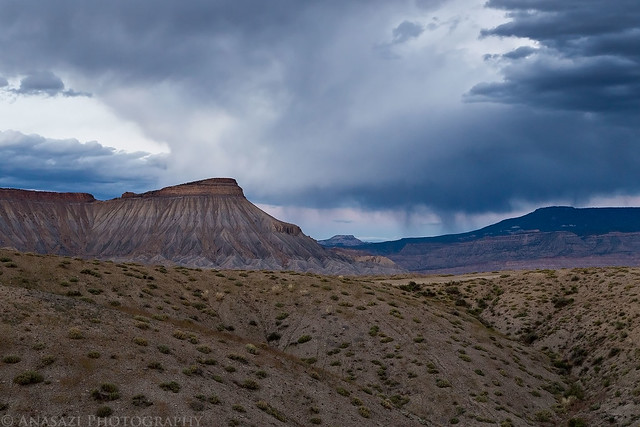 On Saturday morning we left bright and early to start our drive up to Green River, Wyoming. On the way we stopped at the quarry in Dinosaur National Monument to see the dinosaur bones, but I didn’t bring my camera in so I have no photos from there to share. Then we had lunch in Vernal before making a stop at the McConkie Ranch in Dry Fork to visit the petroglyphs. It’s been a few years since I was here last, so it was nice to visit these impressive petroglyphs again. 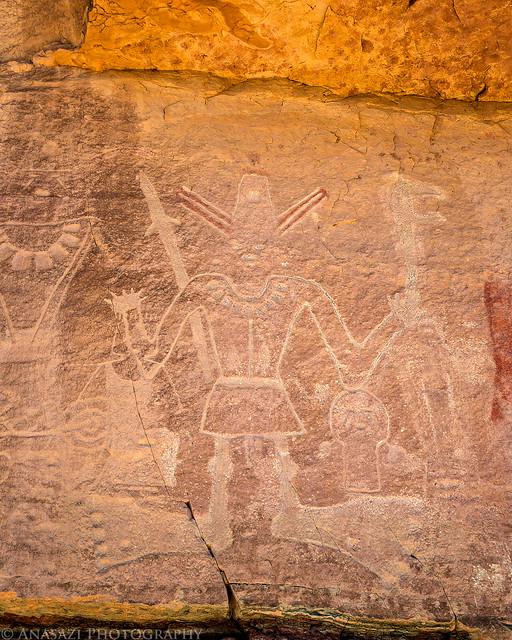 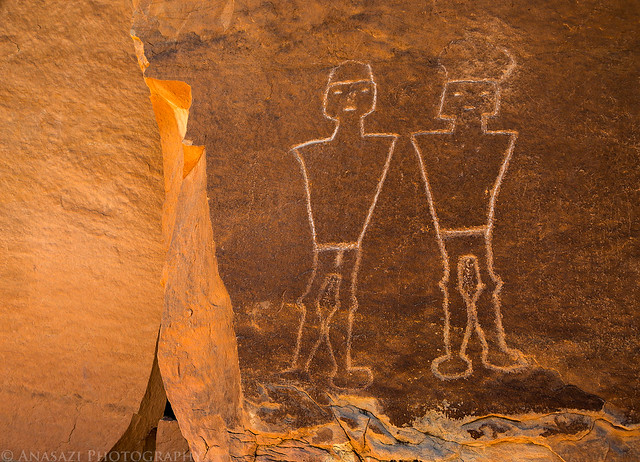 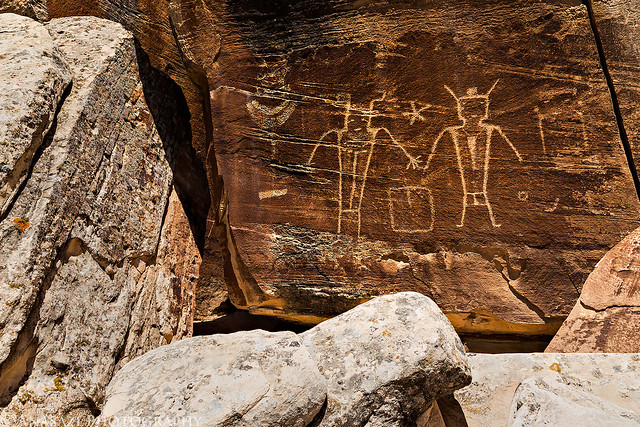 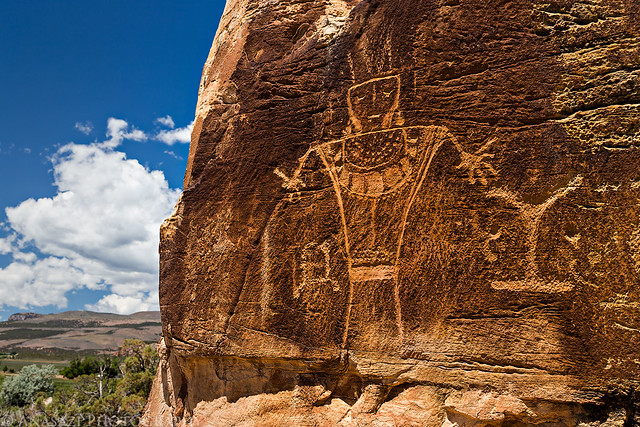 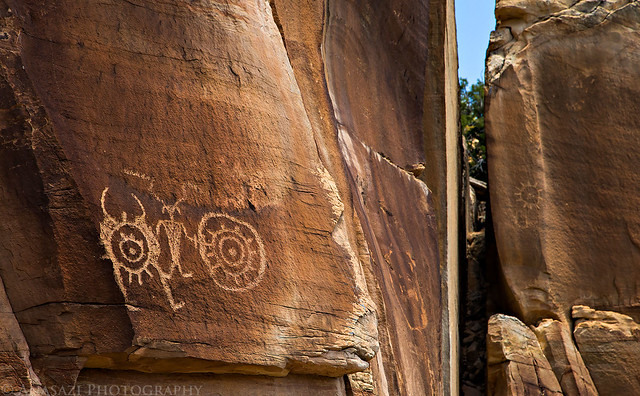 After hiking the short trails on the McConkie Ranch we finished the drive along the Flaming Gorge to Green River and made it to the concert. I didn’t bring my camera with me to the show, but I did take a couple quick iPhone photos.

Otherwise opens the show with nice clouds over the stage. 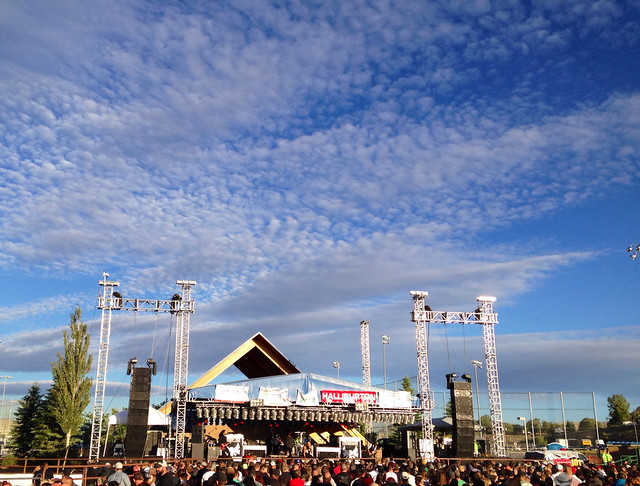 We got to watch a nice sunset over the Green River from the concert. 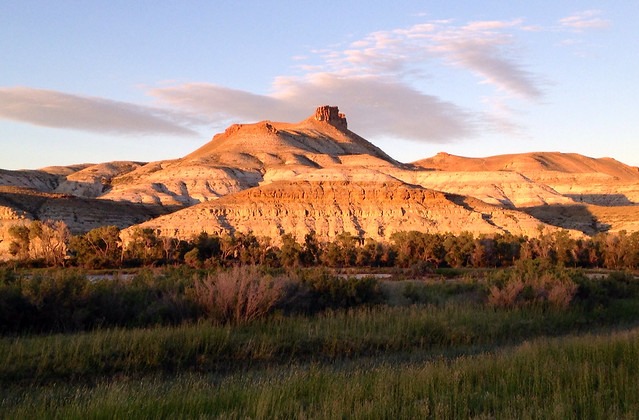 Royal Bliss was on the stage when the sun went down for the night. 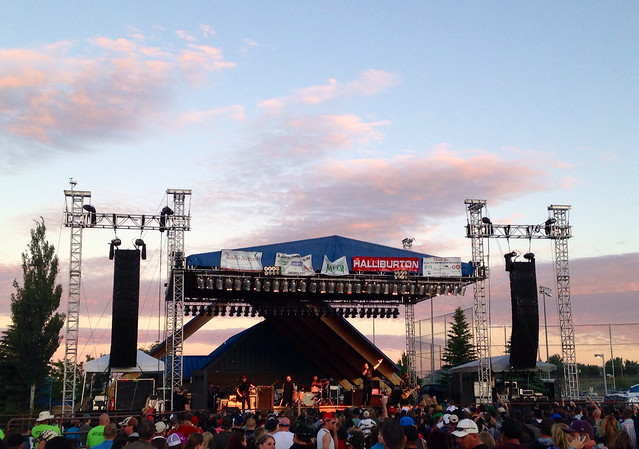 The concert ended a lot later than we thought it would. If I remember correctly, we left sometime around 12:30am. Our plan for the night was to find somewhere to camp outside of town. We started the drive back south on Highway 191 and managed to find a nice secluded campsite off of a side road above Firehole Canyon. We quickly setup our tent and were in our sleeping bags by around 1:30am. It had been a long day and we were both really tired, so we fell asleep quickly.

There was a nice view near our campsite over the Firehole and Little Firehole, but I have no idea what they looked like at sunrise because we both slept in as long as we could in the morning. I think we finally got up around 8:00am, when the sun was starting to make our tent pretty warm inside. We packed up camp and continued on our way home. Shortly before reaching the Utah state line we turned off onto Browns Park Road so we could take a different route back.

For many years I have wanted to drive across the narrow suspension bridge over the Green River in Browns Park. When I bought the tickets for this concert a while back I had planned on taking the side trip to Browns Park so I could finally do it. I guess it’s just my luck that a few days before the weekend a tractor that was too heavy for the bridge drove over and broke through, where it got stuck. We decided to still check out the bridge so we could at least see the stuck tractor. When we arrived we found a group of people from the ranch working to recover the tractor from the bridge. It appeared that they were using the bucket on the front to raise the wheels out of the hole it had created in the bridge. They had another tractor ready to pull the one stuck on the bridge backwards once it was out. I sure hope this bridge gets repaired so that I will still have a chance to drive over it someday. We sat on a rock and watched the recovery progress for a little bit and then continued on our way. 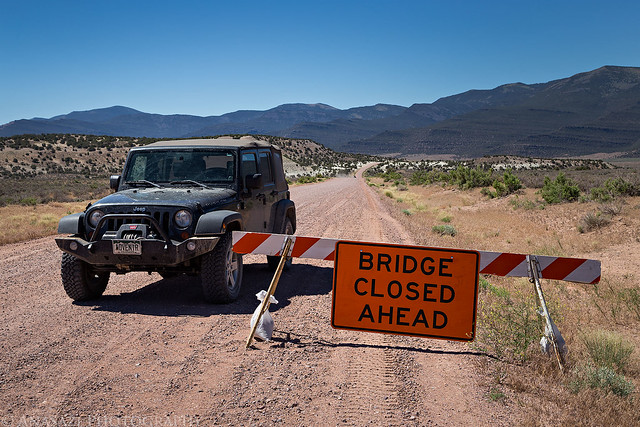 A view of the suspension bridge with the stuck tractor. 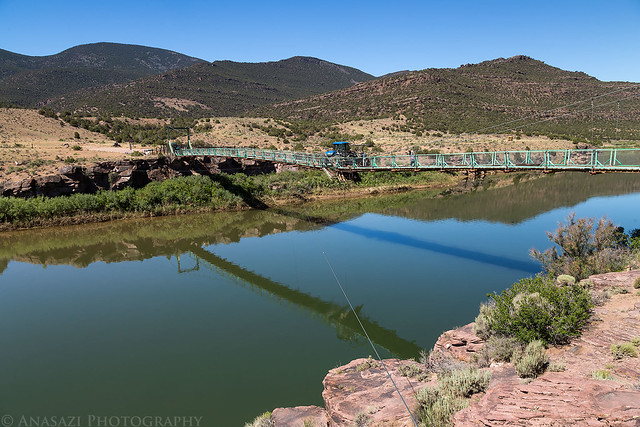 A closer look at the tractor after it’s wheels had been raised out of the hole. 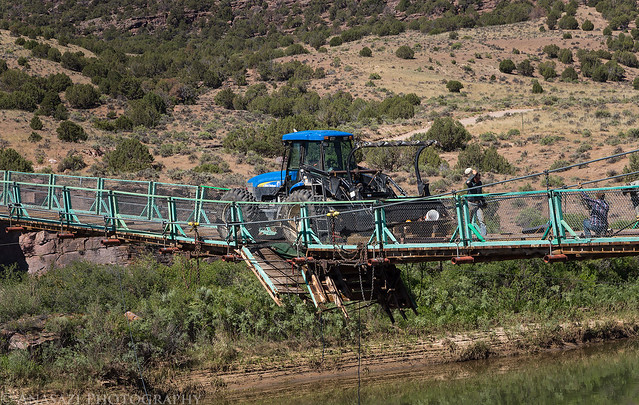 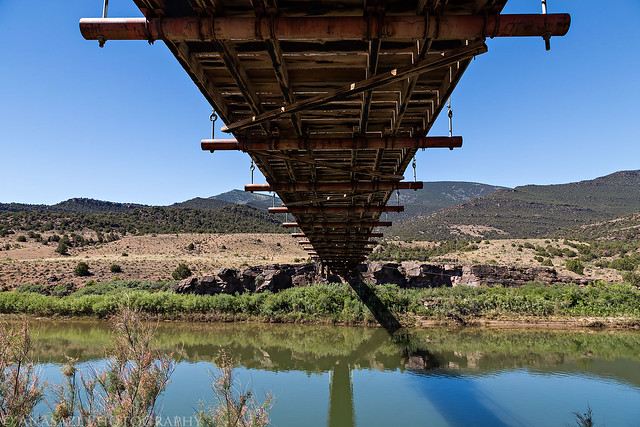 After leaving Browns Park, we made a short detour to the Gates of Lodore in Dinosaur National Monument and had lunch in the campground. 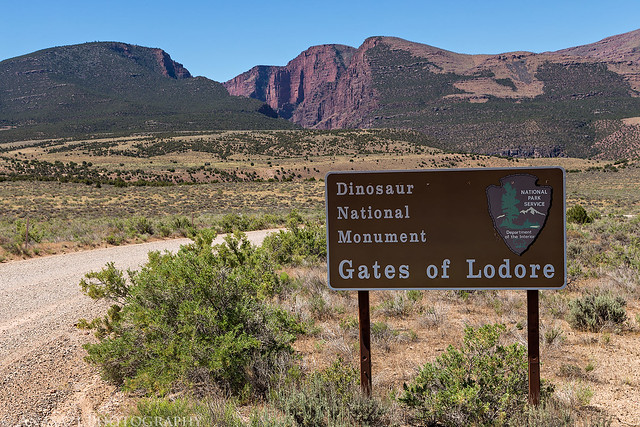 I hiked the short trail to view the Gates of Lodore before we left. 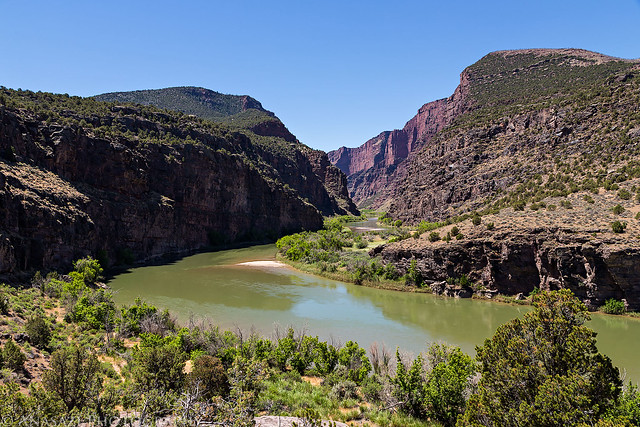 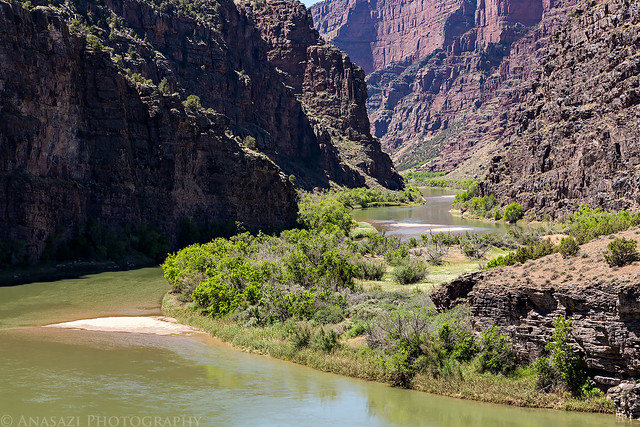 The rest of the drive home was pretty uneventful with only one last stop in Rifle for gas and food.