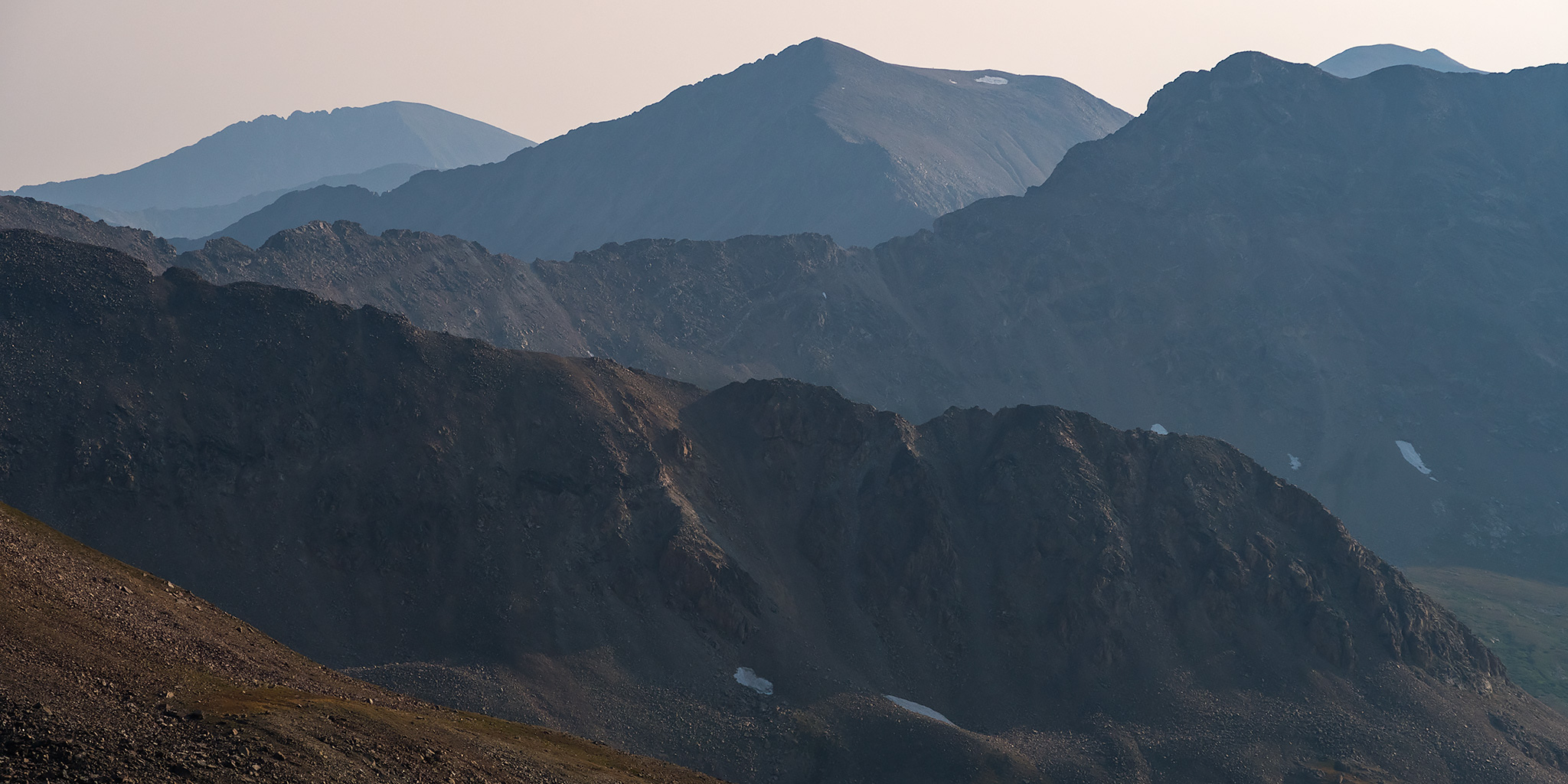 Dyer Mountain (13,855) turned a nice shade of red at sunset thanks to all the smoke in the air. 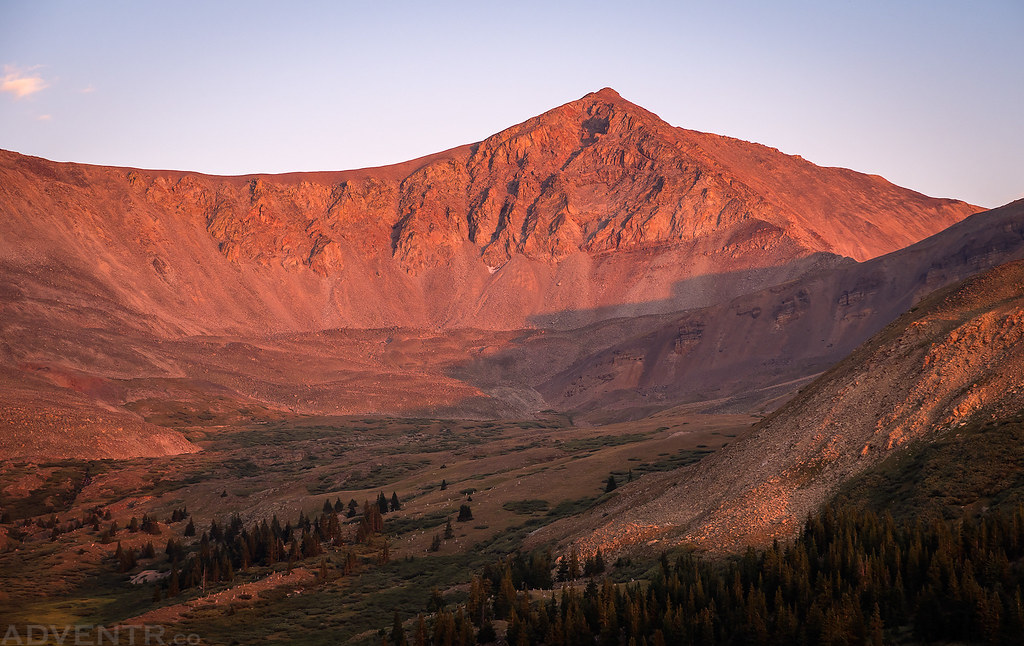 There were a few nice clouds above my campsite that lit up nicely at sunset, too. 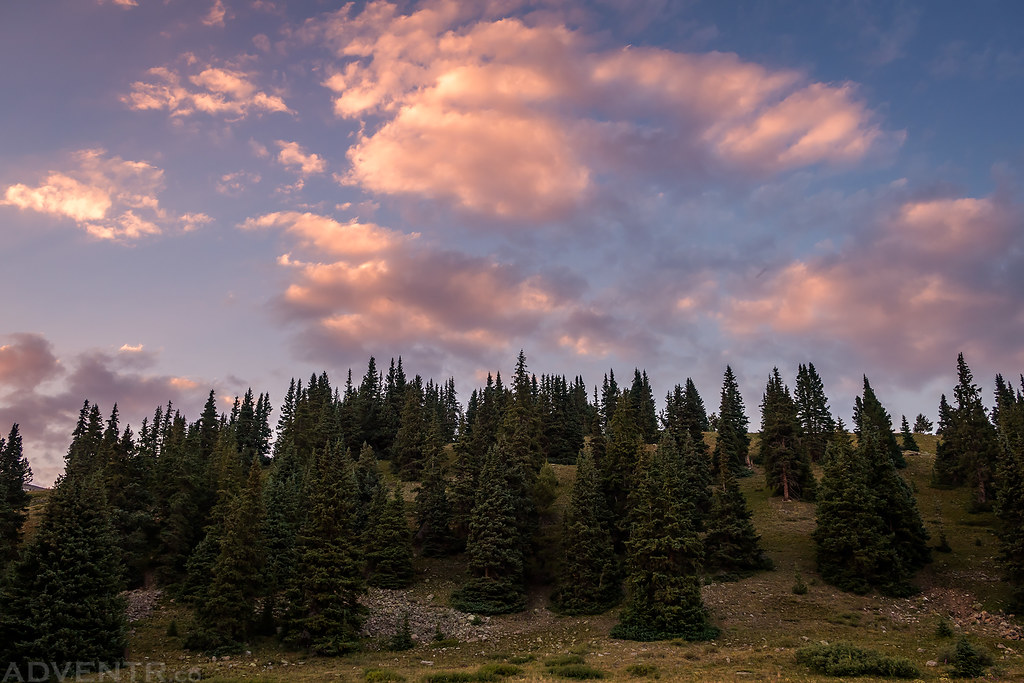 As planned, I slept in a little later on Wednesday morning and then drove back up to Mosquito Pass shortly after sunrise. It was a cool and comfortable morning but as the sun came up I could tell that the smoke in the air was pretty thick today and the views would be very hazy. I could actually smell the smoke in the air and would barely be able to see the peaks of the Sawatch Range to the west later in the morning. Before leaving my campsite I looked back towards Leadville and noticed that the Arkansas River Valley was filled with clouds which looked pretty cool in the dawn light.

After arriving at the pass I started off by hiking over to Kuss Peak which has a building, a few antennas and some solar panels on top. There was a road that went to this complex from the pass, but it was shorter and more scenic to follow the ridge there. From Kuss Peak I continued along the ridge to Mosquito Peak and then Treasurevault Mountain. Since there was an old road that ended at a mining area at the saddle between Mosquito Peak and Treasurevault Mountain, I followed it back to the pass so I wouldn’t have to climb back over the peaks again. It made for a nice easy loop, which is exactly what I was looking for this morning.

Low clouds filling the Arkansas River Valley over Leadville just before sunrise with Mount Elbert (14,433) and Mount Massive (14,421) towering above. 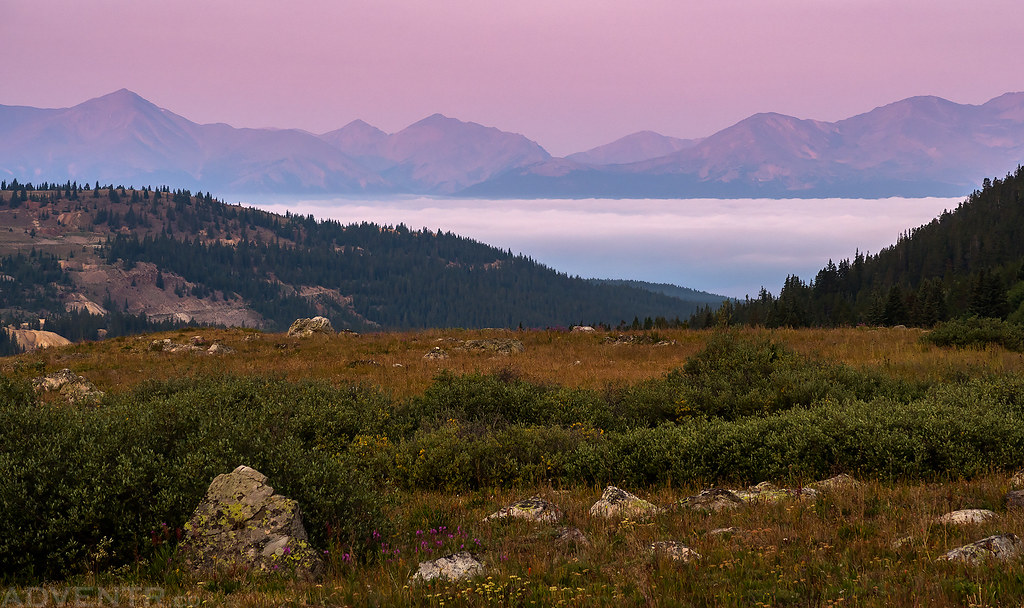 Looking down on Prospect Mountain (12,614) as I drove up to Mosquito Pass at sunrise. 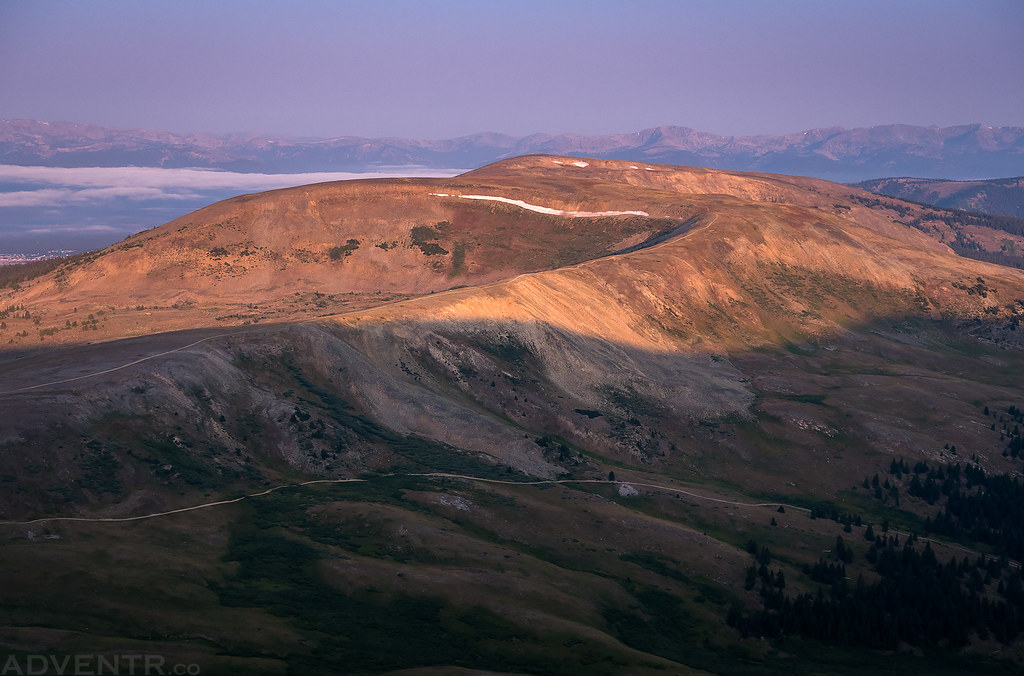 Back at Mosquito Pass and ready to start hiking! 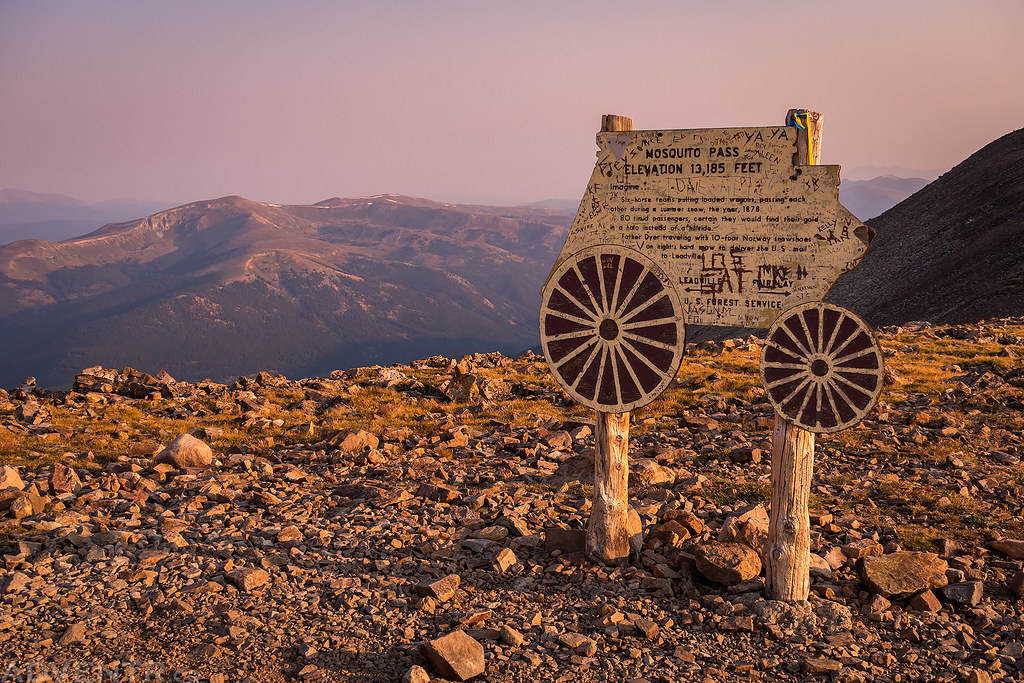 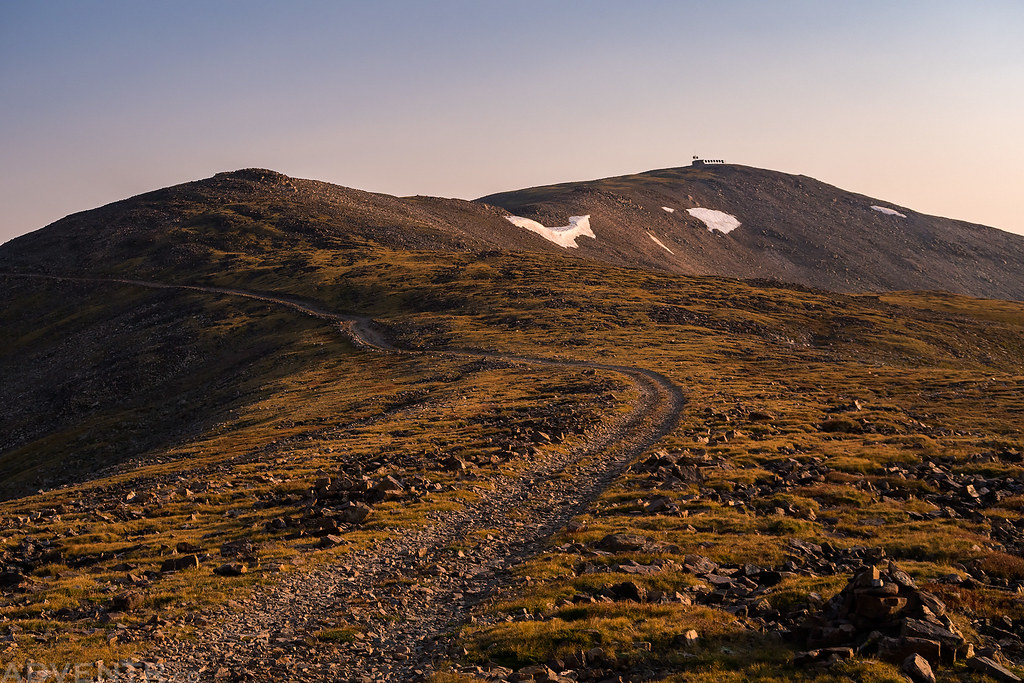 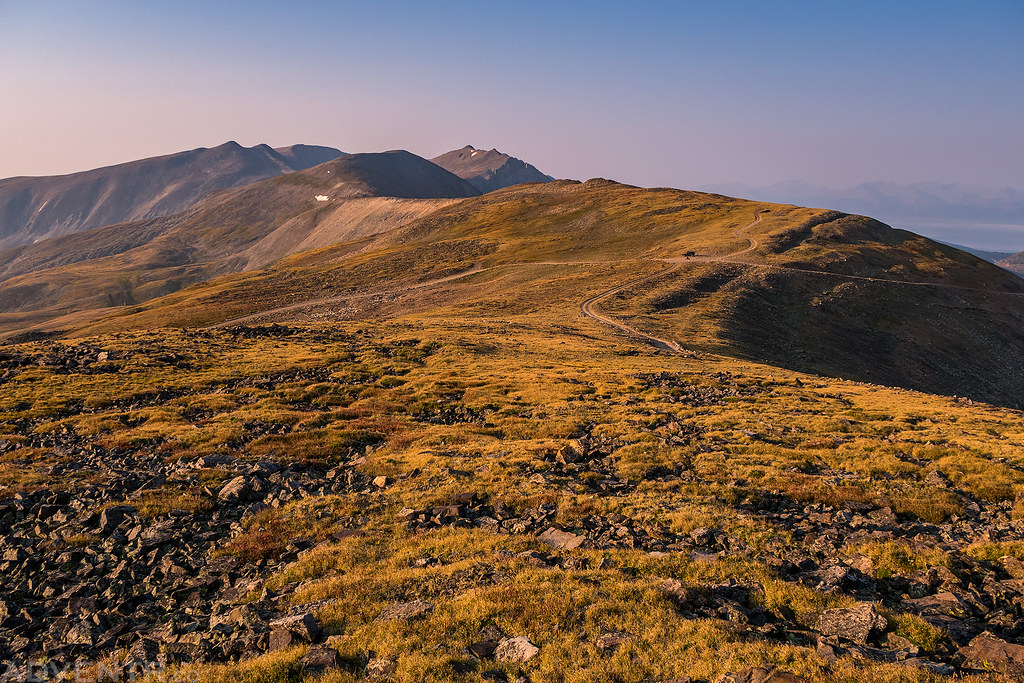 A smoky view over American Flats with London Mountain (13,194) on the left. 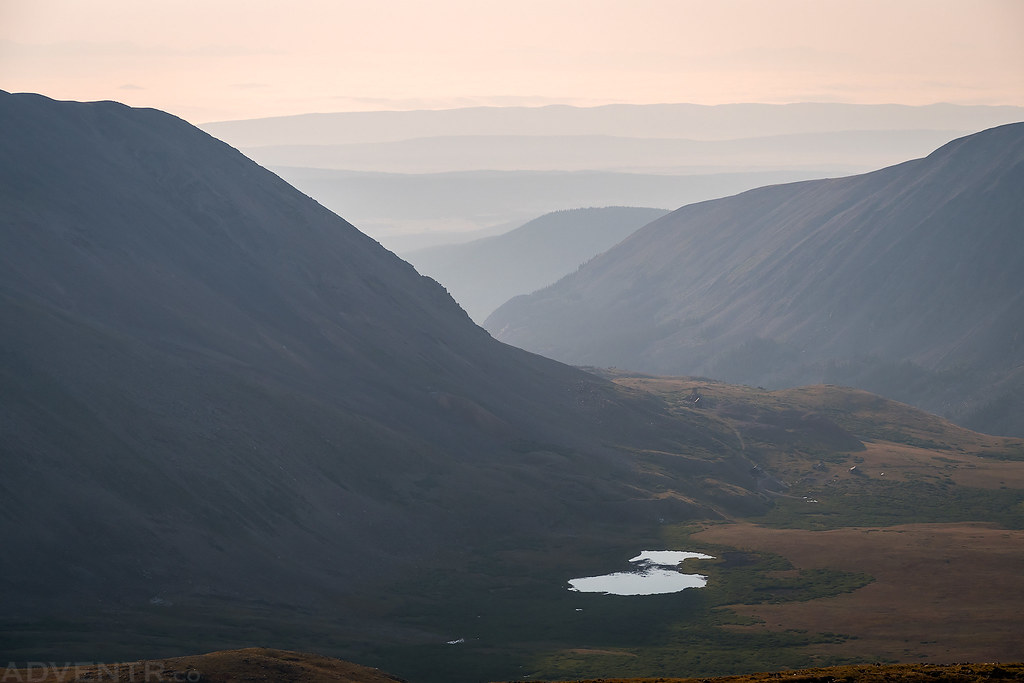 Following the ridge from Kuss Peak to Mosquito Peak. 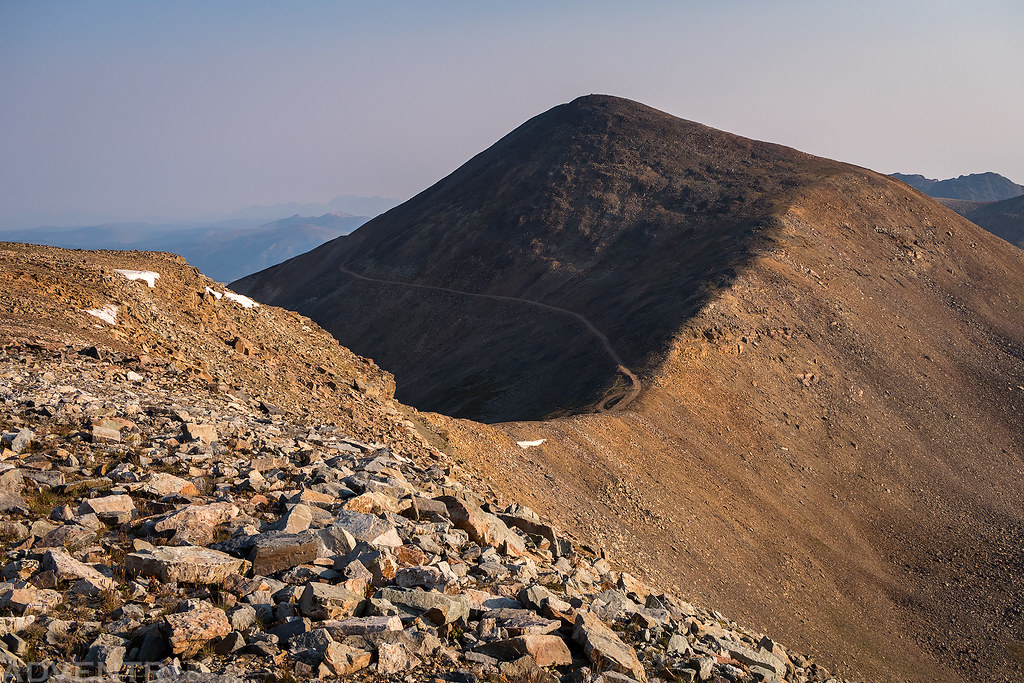 Fourteeners in Smoke. The furthest peak on the left is Quandary Peak (14,265) with Mount Democrat (14,148) in the center. Mount Buckskin (13,865) is on the right with Mount Cameron and Mount Lincoln visible just above it. 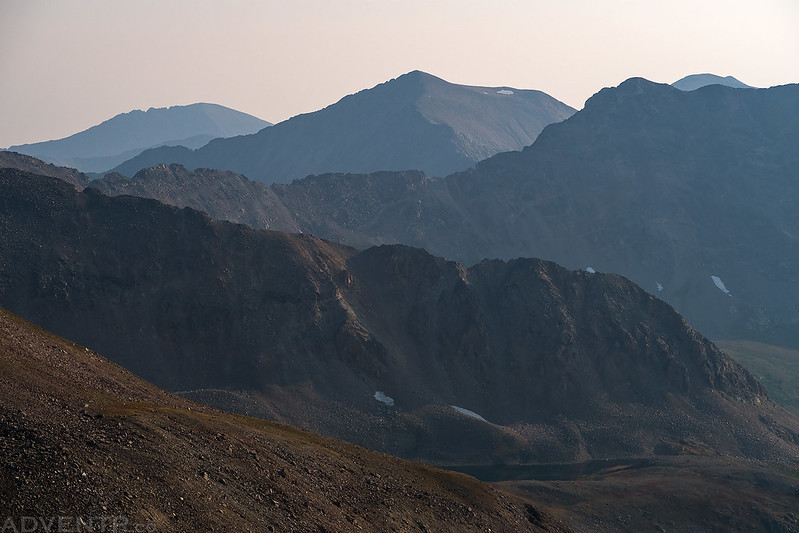 Looking back at Kuss Peak which looks a little more rugged from this side. 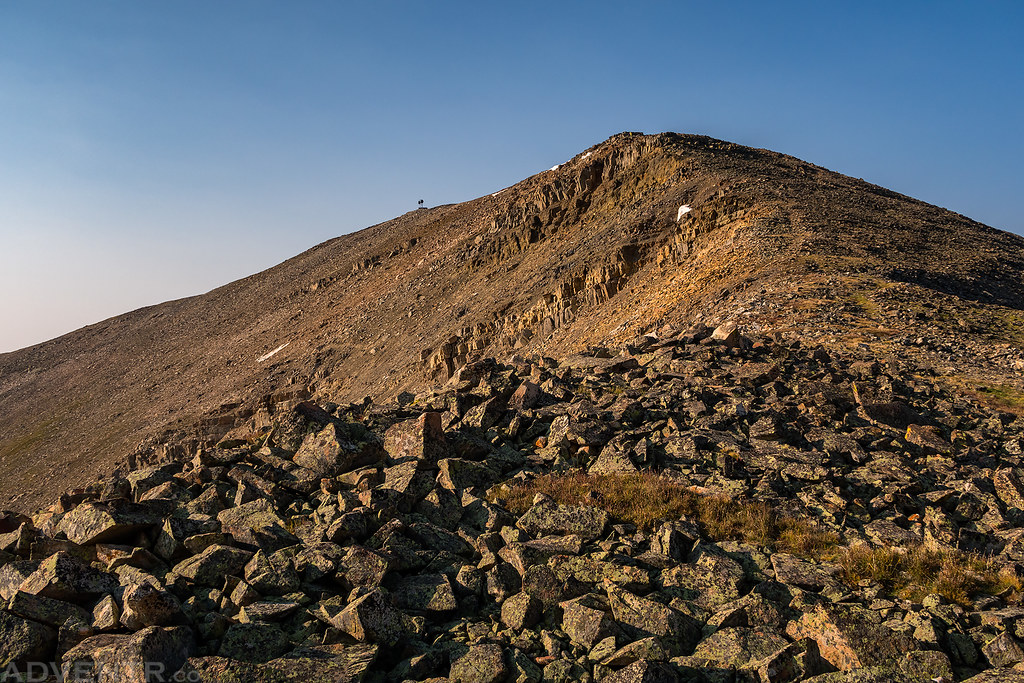 The saddle between Kuss Peak and Mosquito Peak. That’s the road I would follow on my way back to Mosquito Pass. 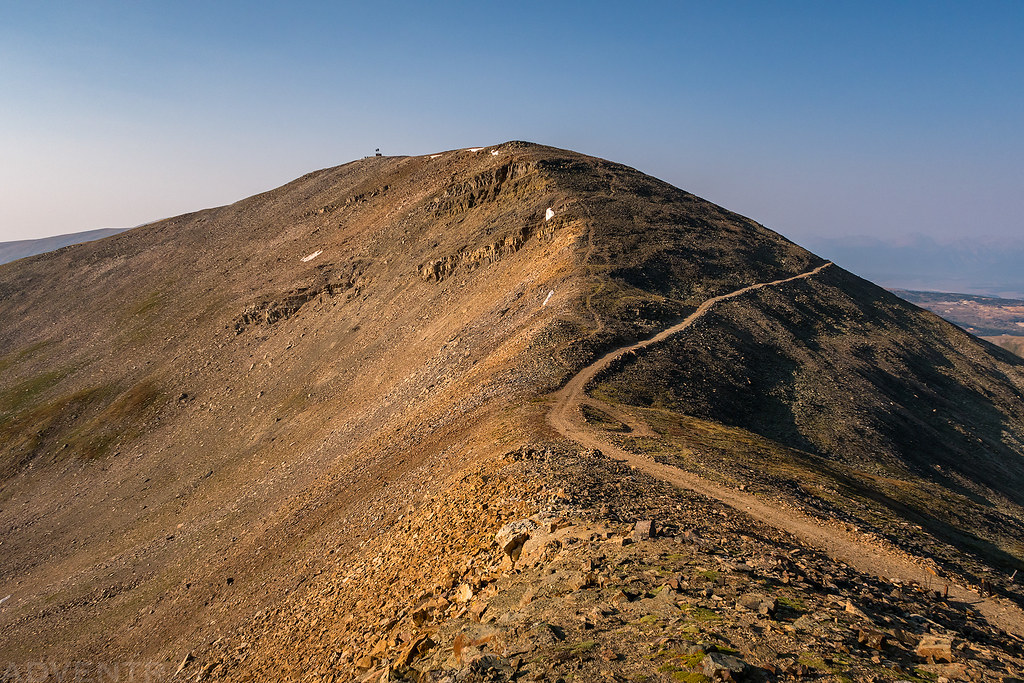 Another view of the distant ridges and peaks through the thick smoke. 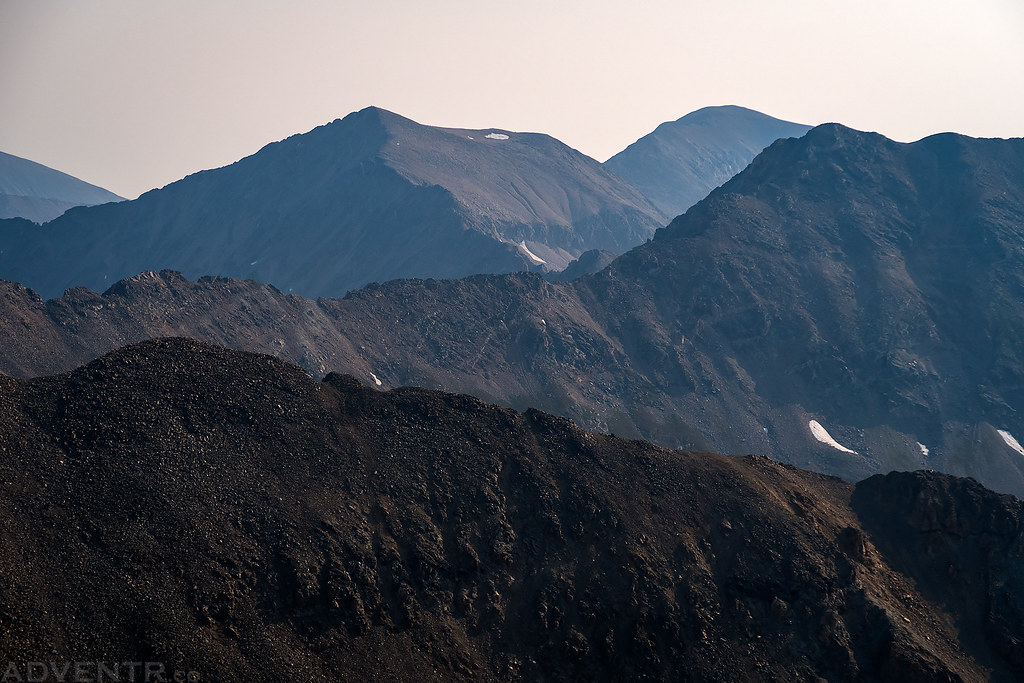 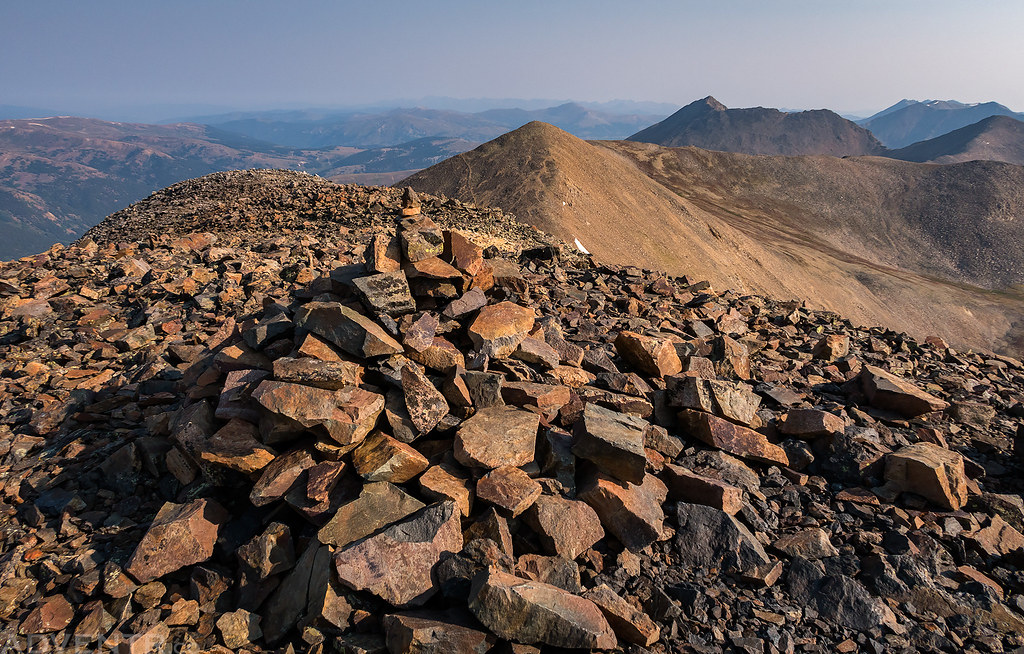 Looking down on Treasurevault Mountain and Mount Arkansas (13,795) as I started my descent from Mosquito Peak. 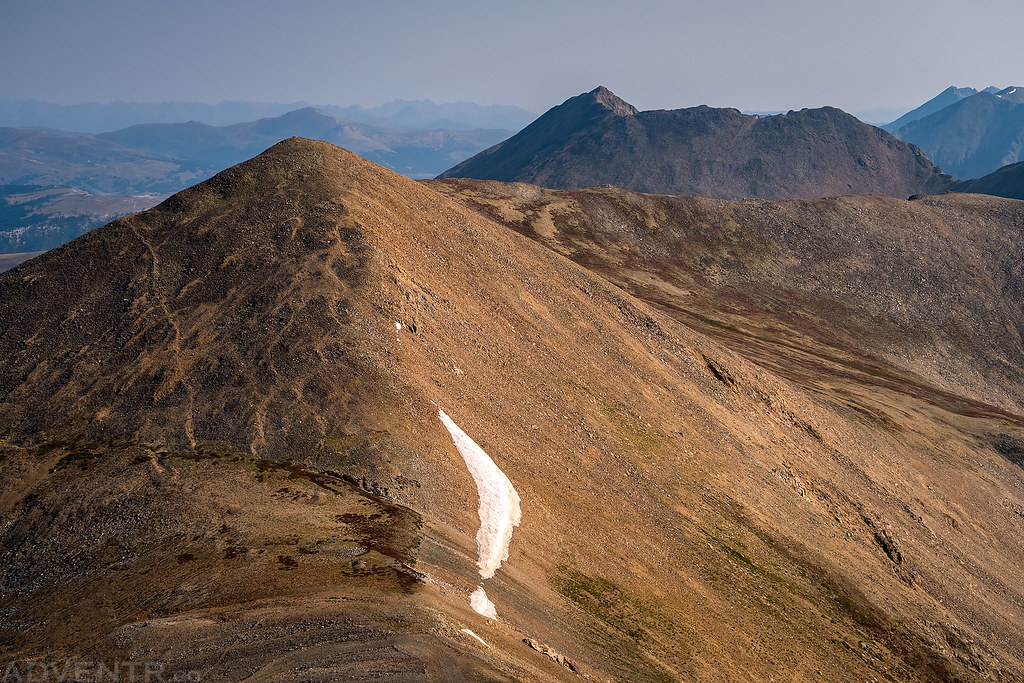 Near the saddle there was some old mining equipment. 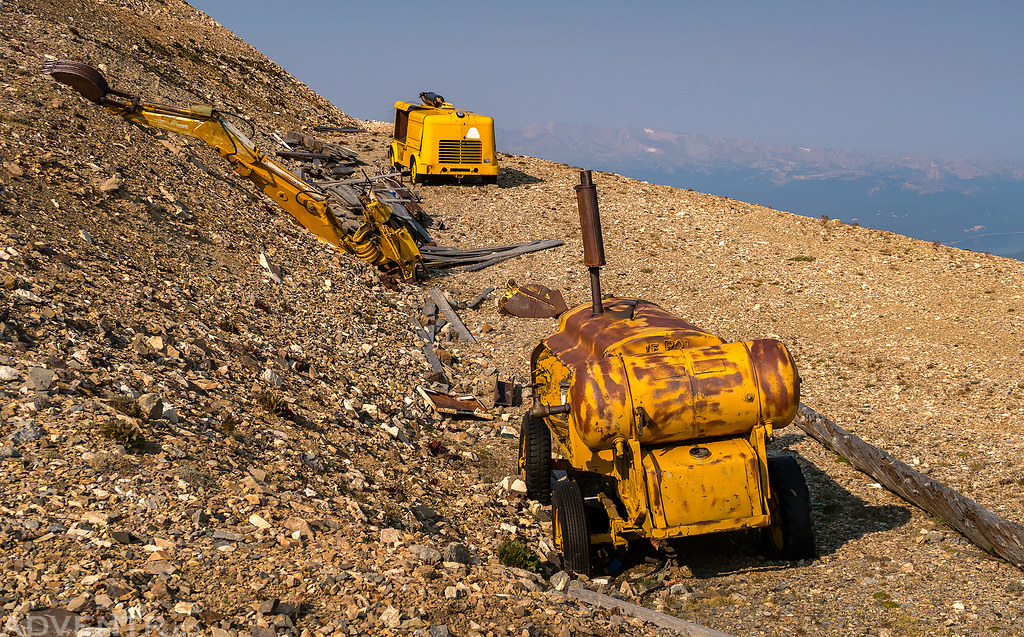 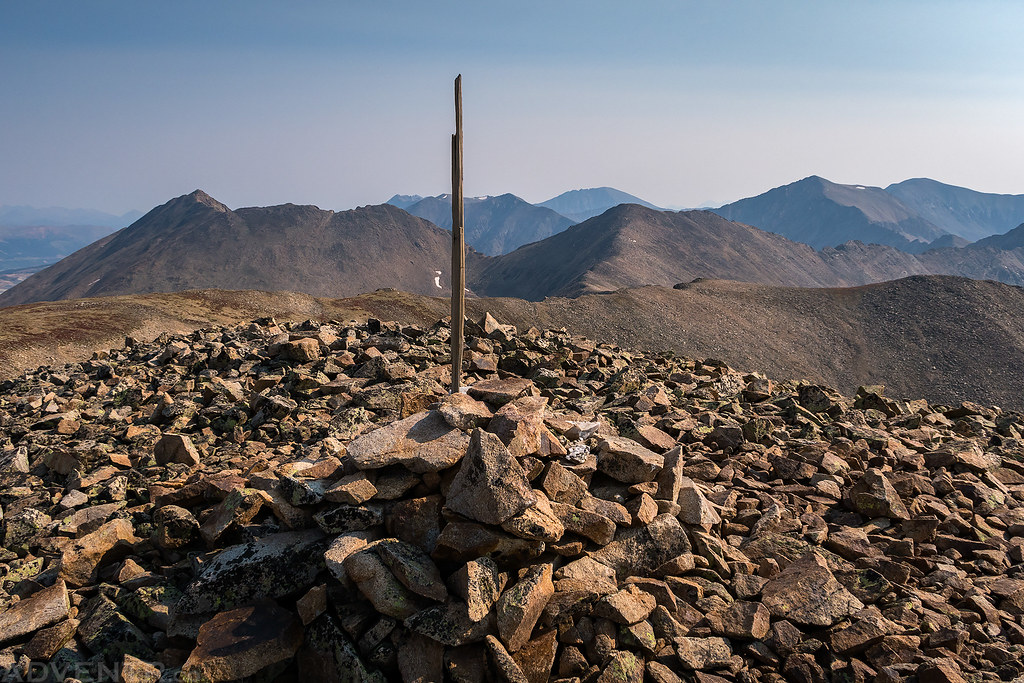 After returning to my Jeep at the pass I drove over to another set of antennas and buildings that were a short distance to the south and then hiked up to the summit of Mount Evans, which was a very easy tundra hike that offered some nice views of nearby Gemini Peak, Mount Sherman and Dyer Mountain.

Looking back over the American Flats to Mosquito Peak and London Mountain as I hiked up Mount Evans. You can see my Jeep parked at the saddle below. 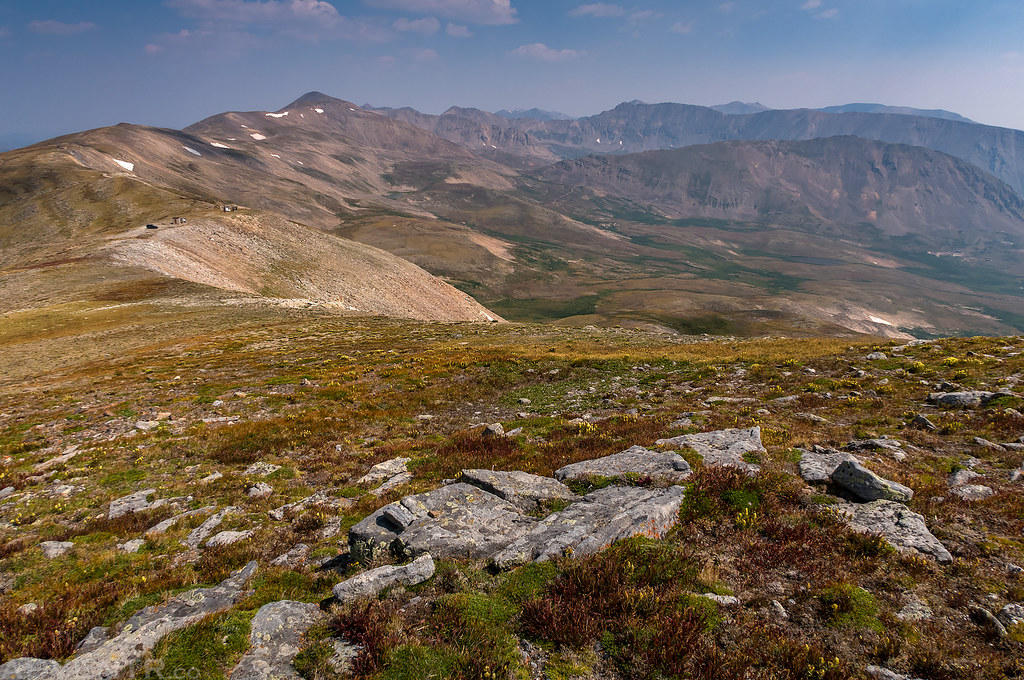 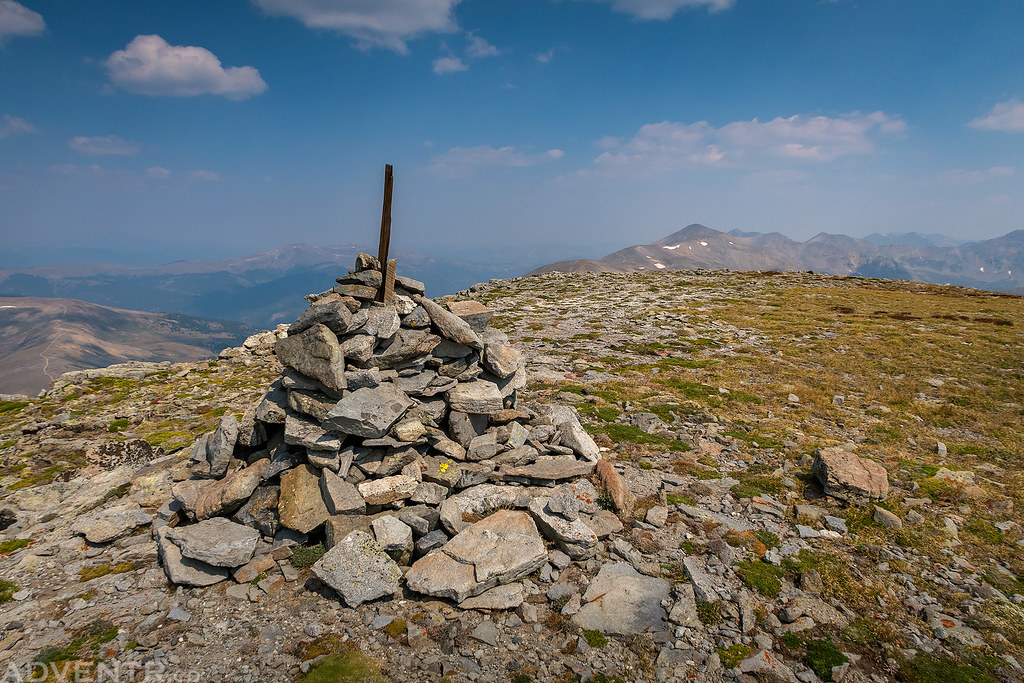 When I returned to my Jeep again, I drove back down to Leadville and then followed the Arkansas River to Buena Vista where I had a burger and fries from K’s for lunch. Next I would be heading back into the Sawatch Range to climb a couple of peaks near Hancock Pass on Thursday morning.