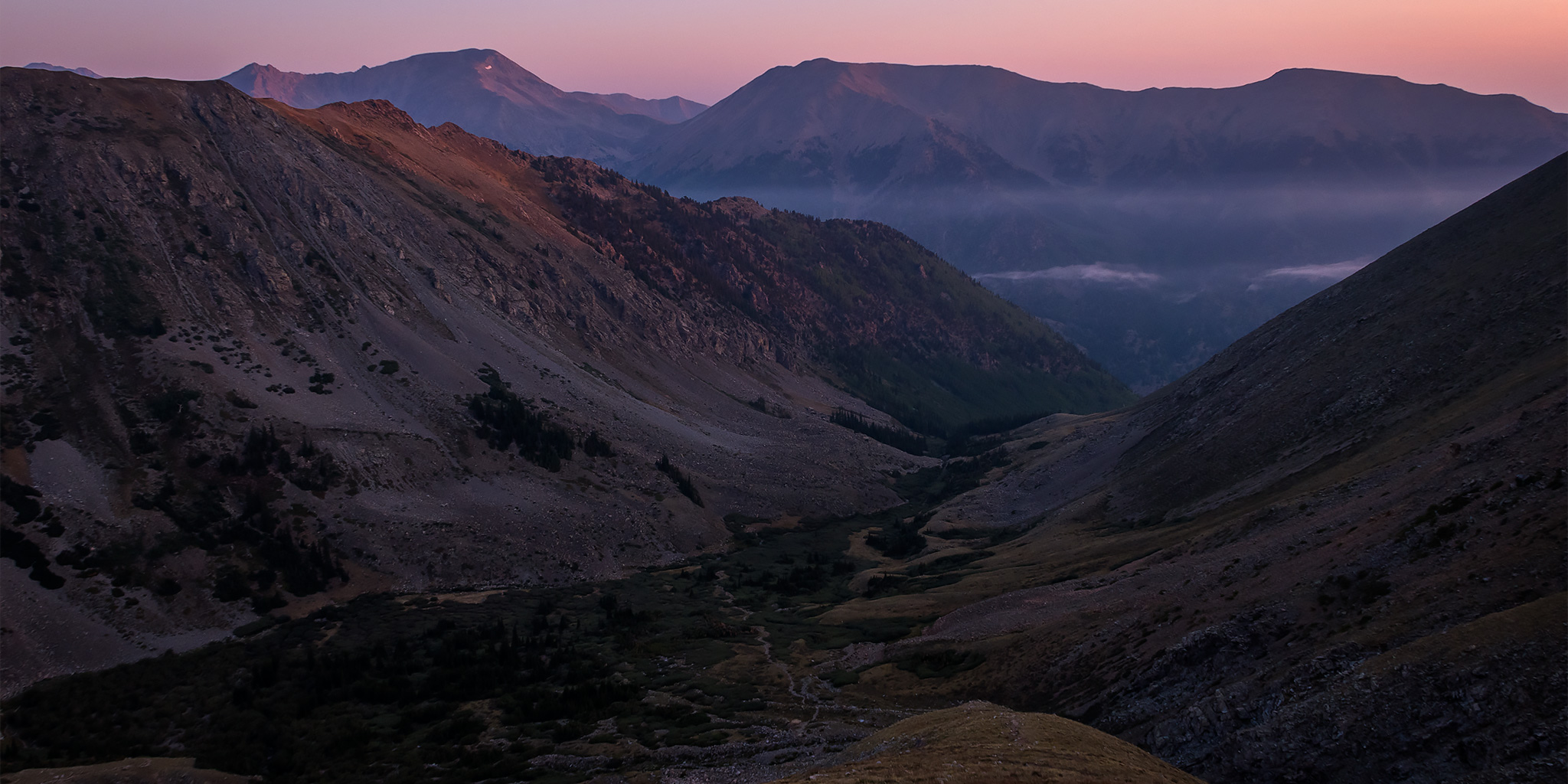 A touch of alpenglow on Missouri Mountain as I hiked above treeline in Missouri Gulch. 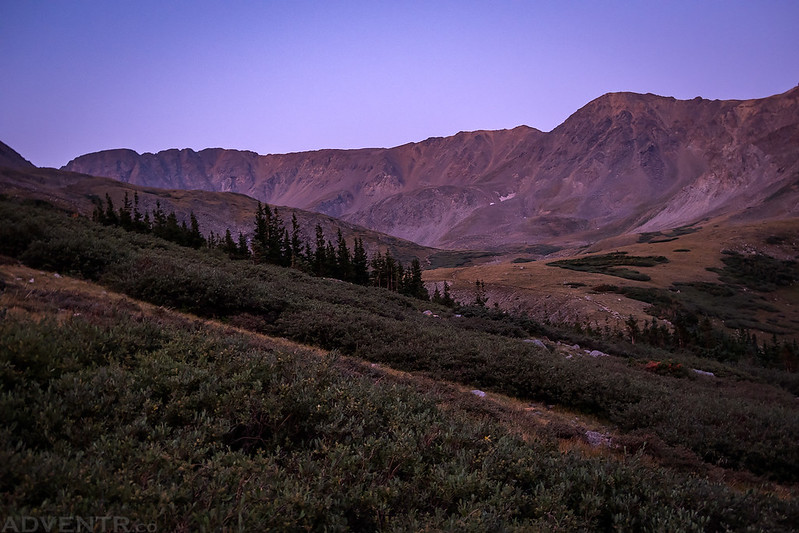 Looking back down Missouri Gulch to Mount Hope (13,933) and Quail Mountain (13,461) as I hiked up the many switchbacks on the steep Northwest Ridge of Mount Belford. 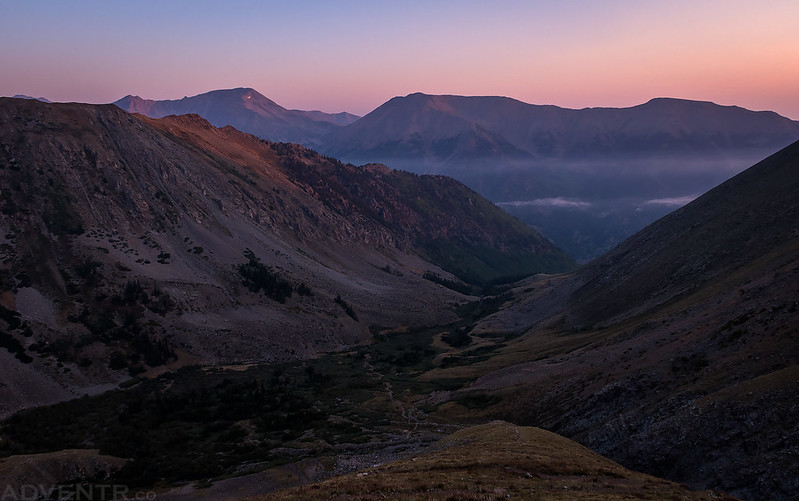 A touch of light across Missouri Gulch as I climbed one of the many short switchbacks on this trail. 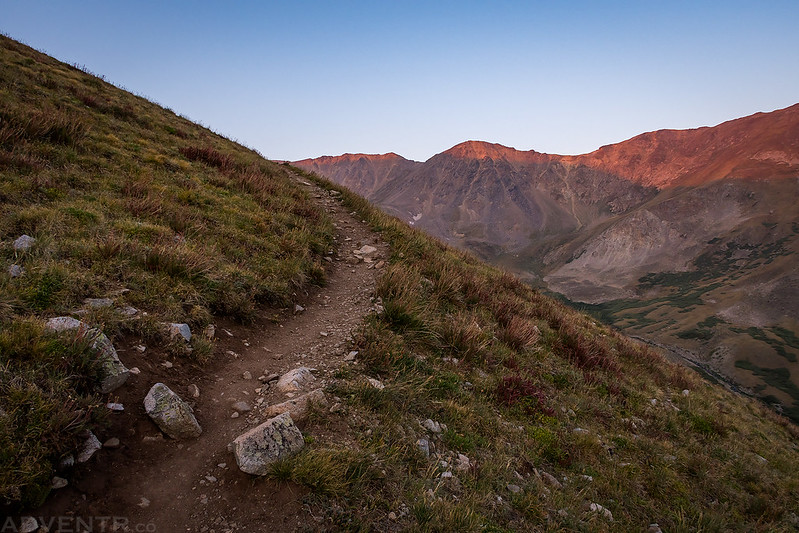 Sunrise on Missouri Mountain (14,067), which is currently my nemesis since it is the only 14er that I have attempted but did not reach the summit! I will be back to try again from Pine Creek someday. 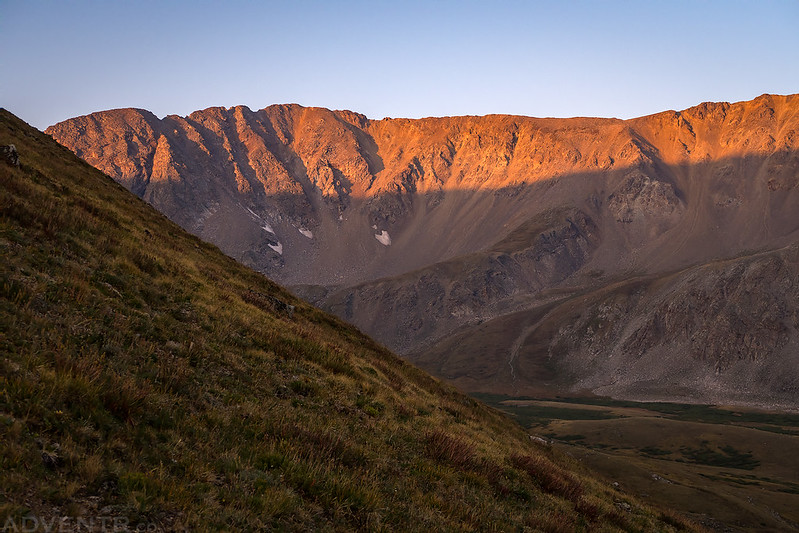 As I climbed higher up the ridge I got a hazy view over to La Plata Peak (14,336), which was definitely one of my favorite climbs in the Sawatch Range. As the sun came up I could tell that there was a lot of smoke in the atmosphere again this morning. 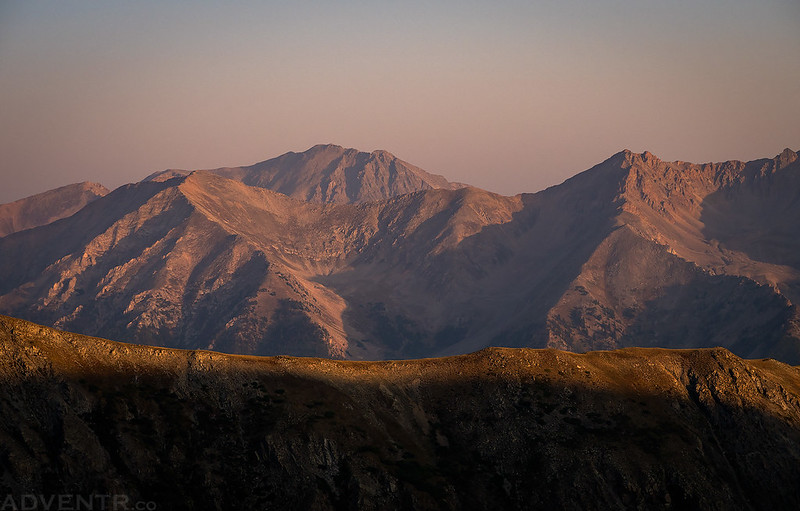 I was also treated to a smoky view over Elkhead Pass to Missouri Basin and Emerald Peak (13,904). 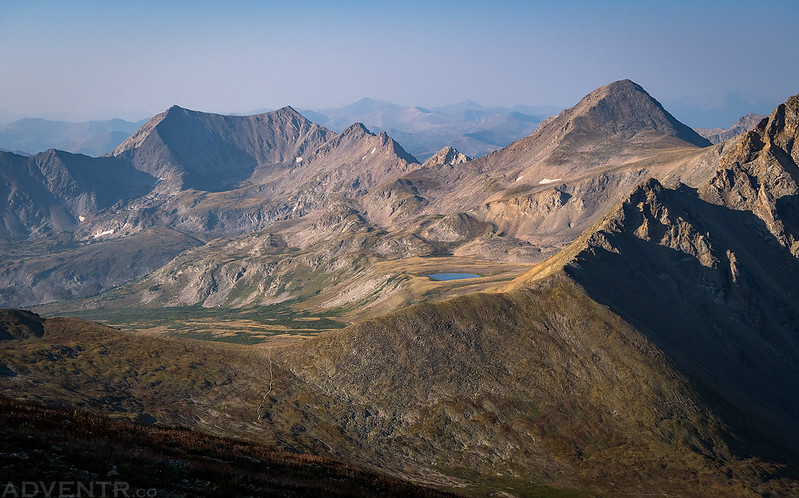 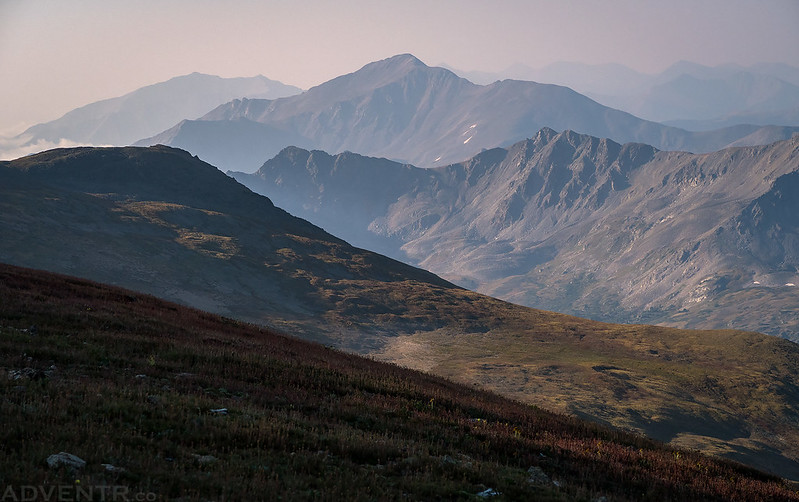 As I neared the summit of Mount Belford, I could see that there were some low clouds filling the Arkansas River Valley in the distance. 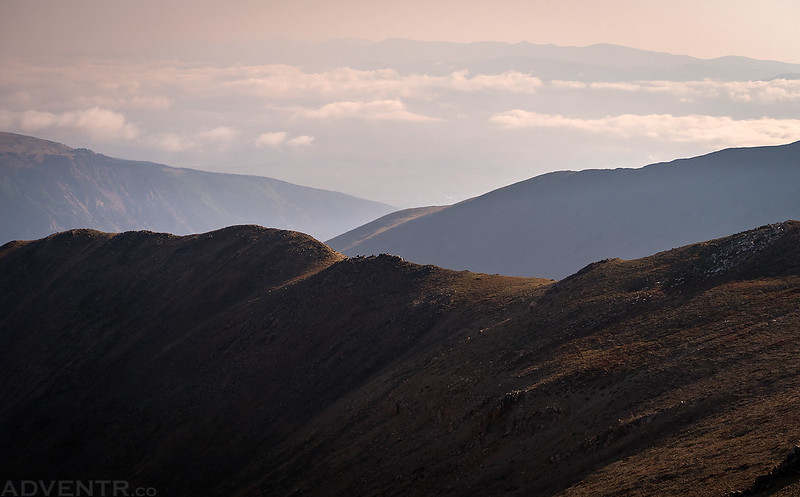 A view from the summit of Mount Belford (14,197) toward the Missouri Basin. Huron Peak (14,003) is visible over on the right side over Missouri Mountain. 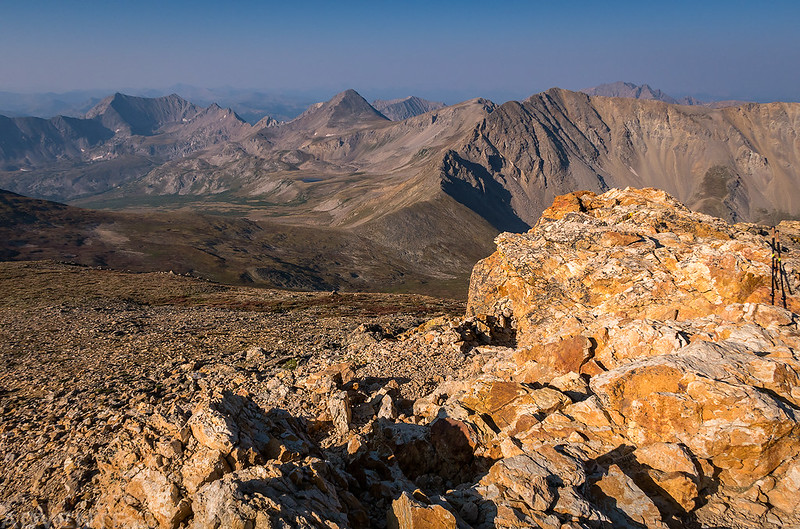 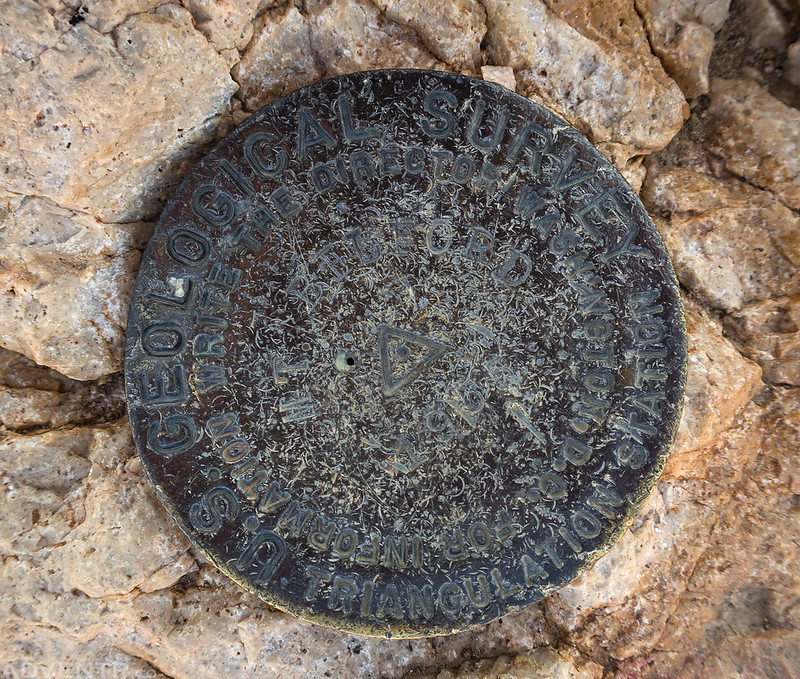 Even though I was moving slow on this climb, I was feeling pretty good when I reached the summit of Mount Belford and the sky was still completely clear. I couldn’t get signal on my phone, so I couldn’t check the current weather forecast, but the day before it wasn’t calling for any storms today. Based on this information, I decided to carry on and hike over to Mount Oxford which was another mile and a half away with around 700 feet of elevation again, plus I would have to return over Mount Belford again on the way back.

Following the trail from the summit of Mount Belford toward the saddle on my way to Mount Oxford. 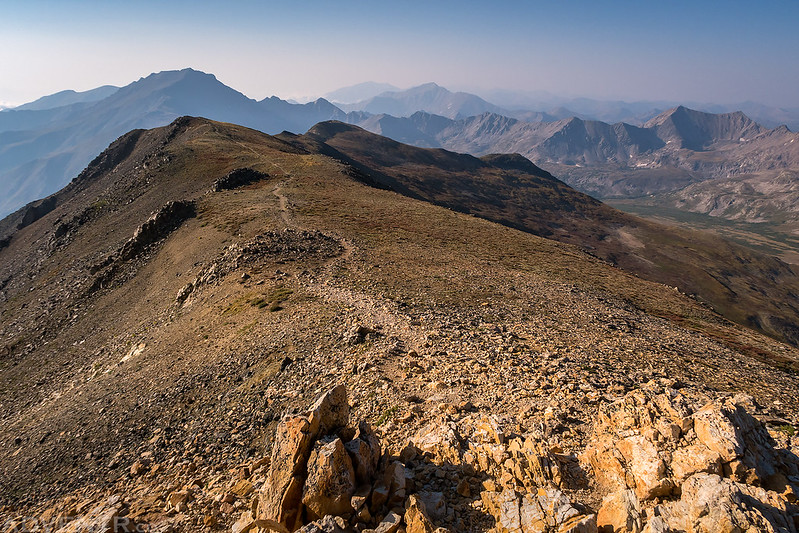 Looking back at Mount Belford (the summit is the yellowish point on the right) from the saddle between the two mountains. 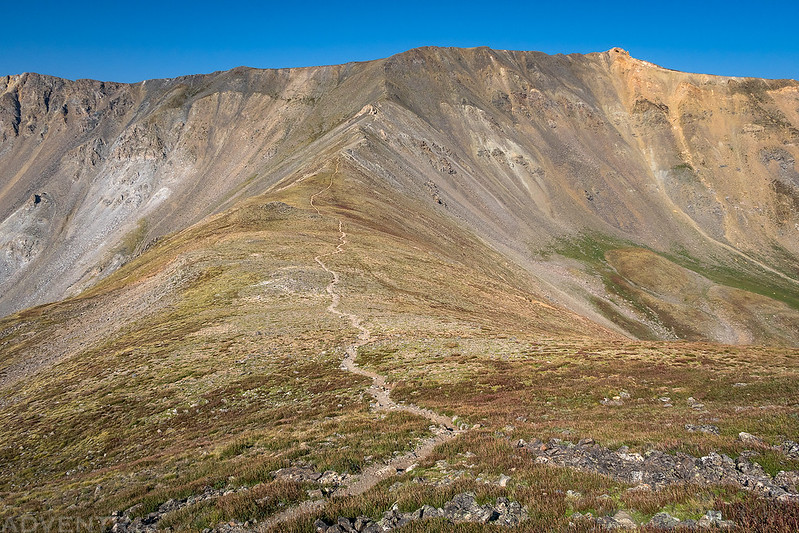 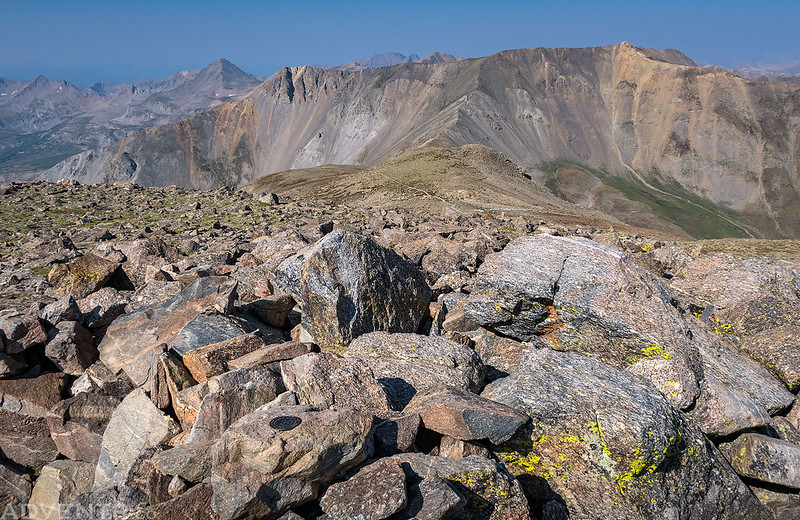 The benchmark on Mount Oxford. 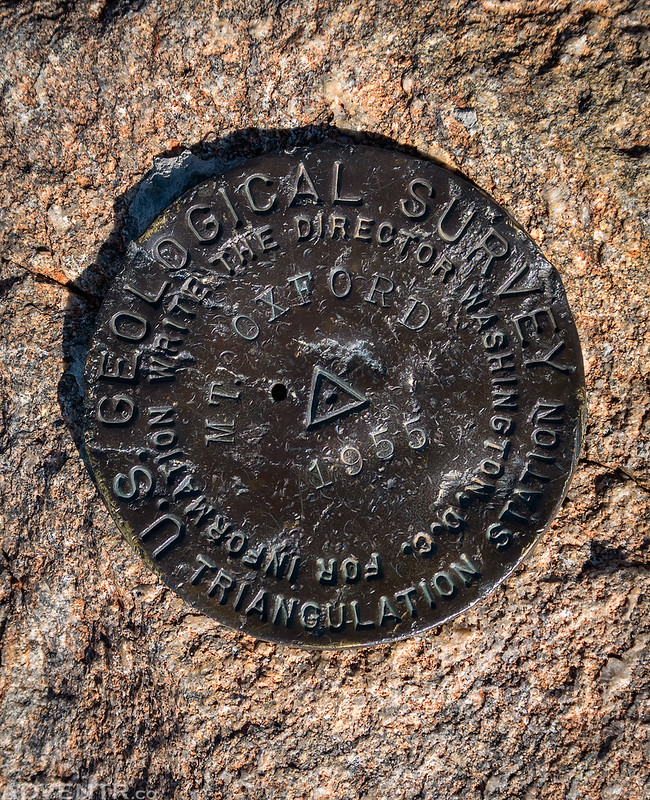 Another view from the large flat summit of Mount Oxford with Mount Harvard (14,420) in the background on the left. 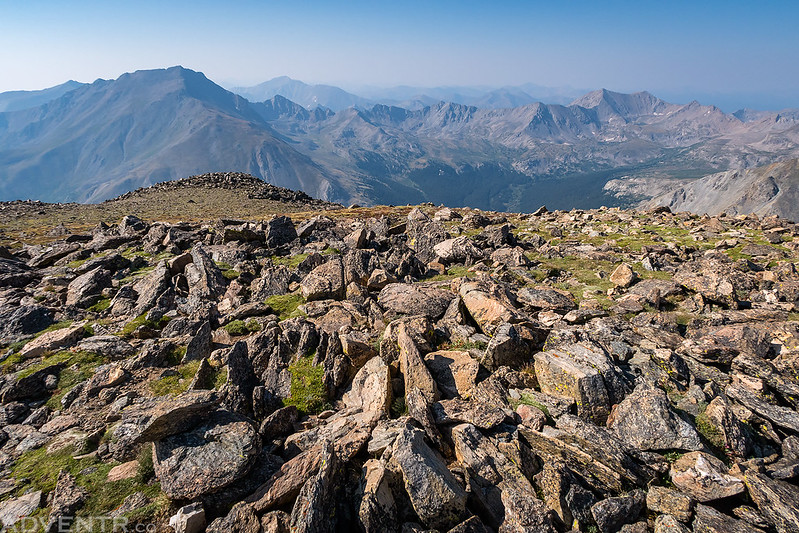 It took me about an hour to reach the summit of Mount Oxford from Mount Belford, but my legs were getting tired by this point and it ended up taking me about an hour and a half on the return trip. The weather was holding out so there were no worries about speeding up on the way back. Instead of returning the same way I had come, I made a loop by following the trail from Mount Belford to Elkhead Pass down into Missouri Gulch. Even though this was a longer route, it was not nearly as steep, so it was a bit easier.

Leaving on the trail from the summit of Mount Oxford. 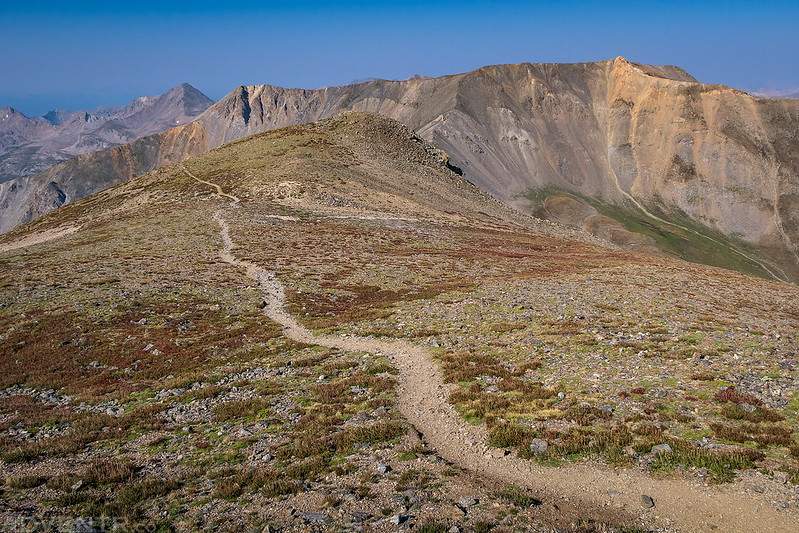 Looking back to Mount Oxford during my hike back over to Mount Belford. The first few clouds of the day were just starting to appear. 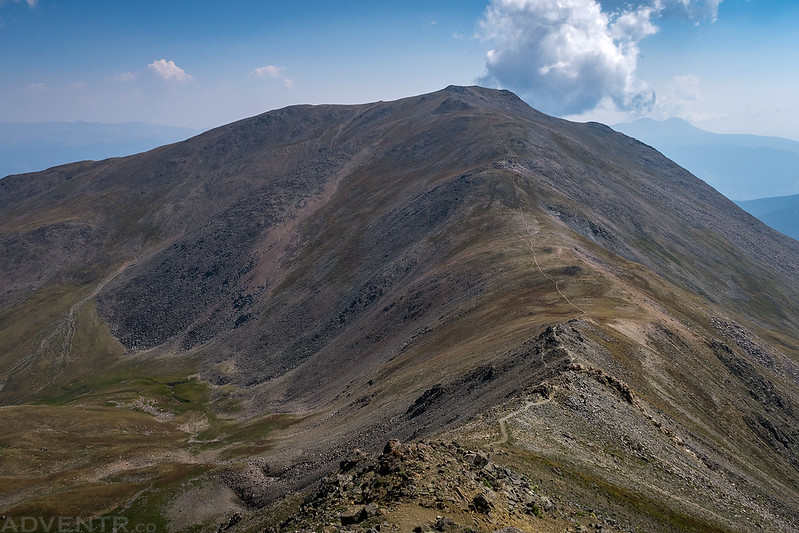 A good view of Missouri Mountain and Iowa Peak (13,831) as I hiked down to Elkhead Pass. 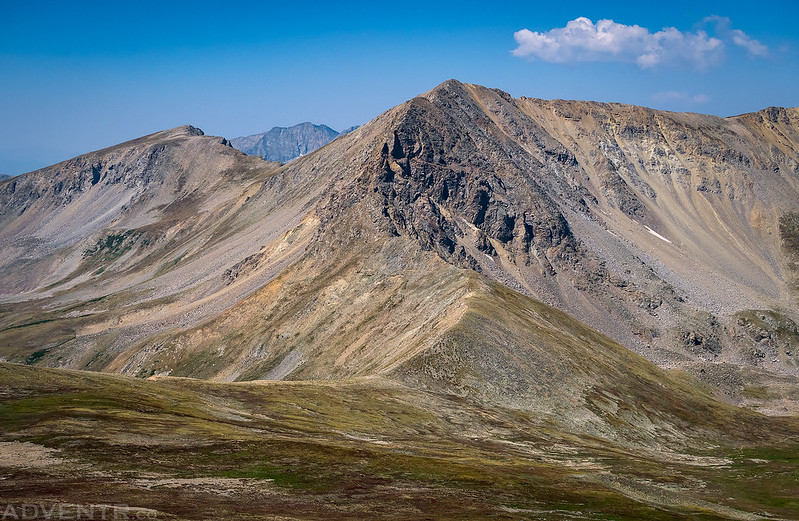 Following the Elkhead Pass Trail back down Missouri Gulch. 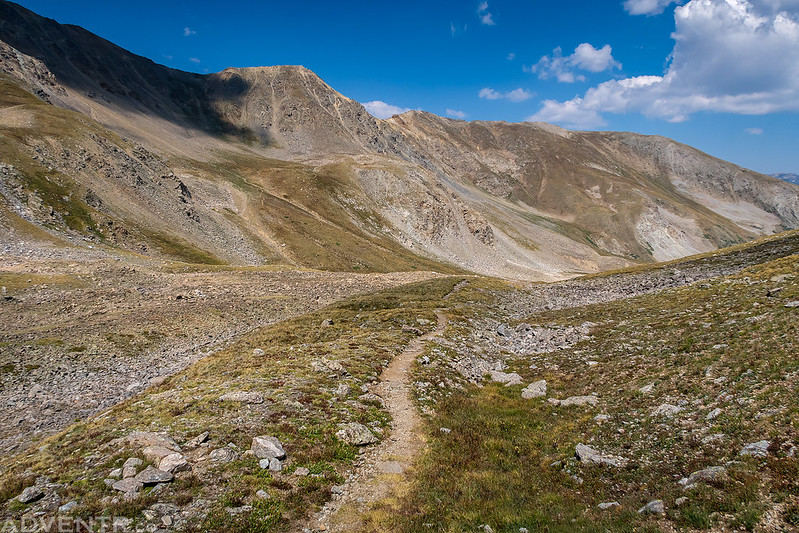 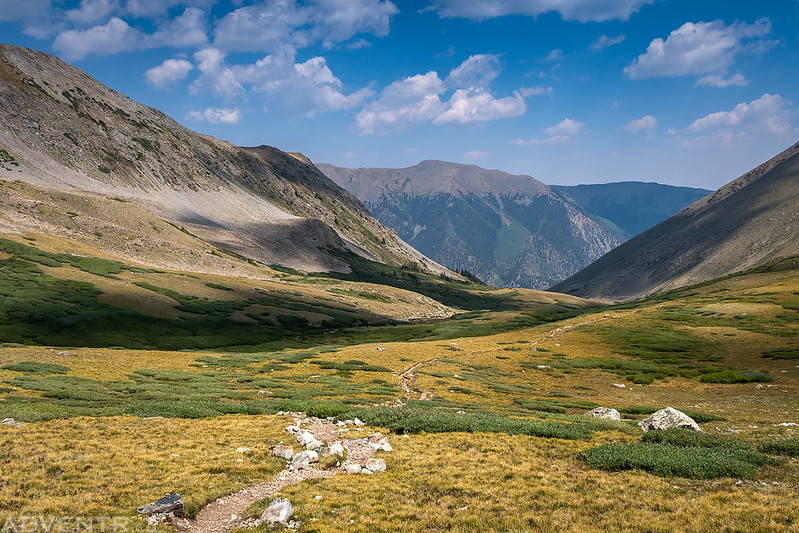 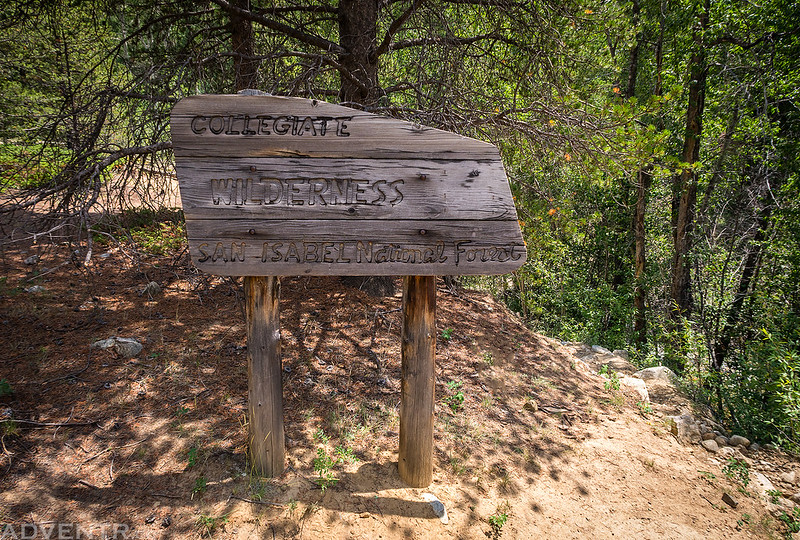 By the time I reached the trailhead at 1:30pm it had been a long day and my GPS was reporting 13 miles with around 6,000 feet of elevation gain. My legs were certainly feeling it and I was surprised that I was able to make it to both summits. I hopped into my Jeep and headed to Leadville for a late lunch at High Mountain Pies and so I could hike a few easy 13ers in the Mosquito Range on Wednesday morning.