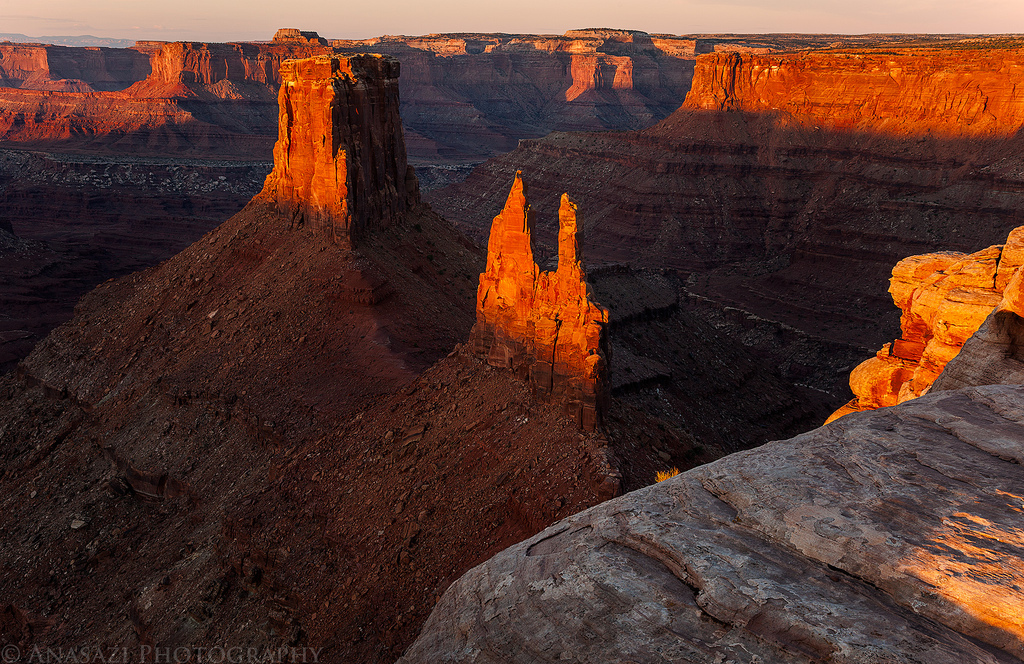 After dropping off my Jeep at the Swaseys Rapid takeout, we continued in Jackson’s Prius to the put-in at Nefertiti. The last time I was on this road it had been freshly bladed and I don’t recall it being too rough, but unfortunately this time around it was a bit rocky and almost too much for the Prius. The most difficult part was through a few stretches of sand that he had to power through. Luckily, he somehow managed to get that little car to the end of the road without getting stuck or scraping up the bottom too badly. If he hadn’t, we would have been walking back to the Jeep and not getting on the river.

After reaching the put-in at Nefertiti, we got our boats setup under the shade of a large cottonwood tree. 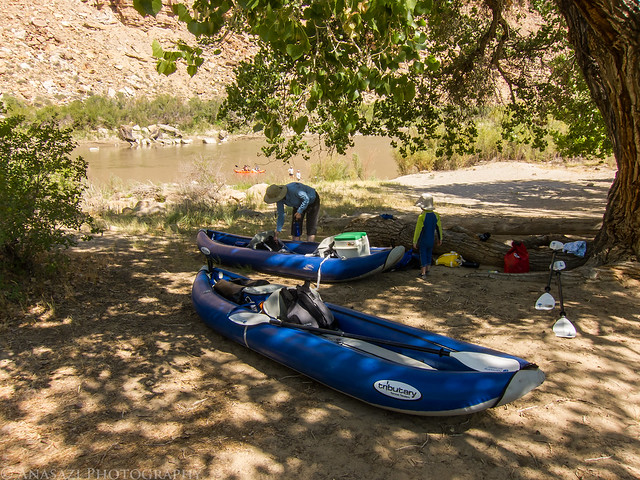 Ready to get on the river for the day. 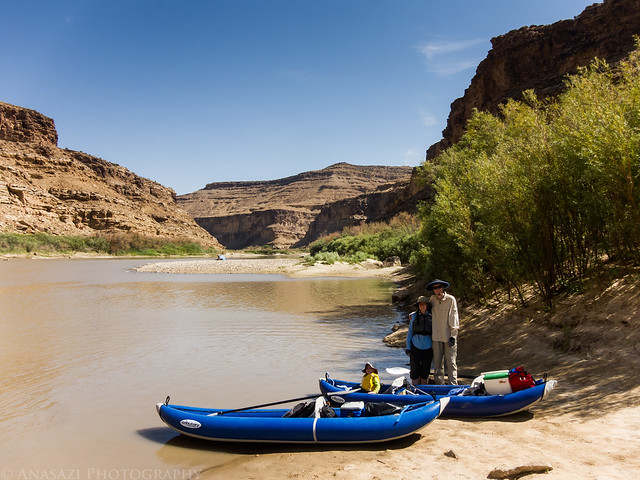 Just around the first bend we paddled under the large Nefertiti Rock. 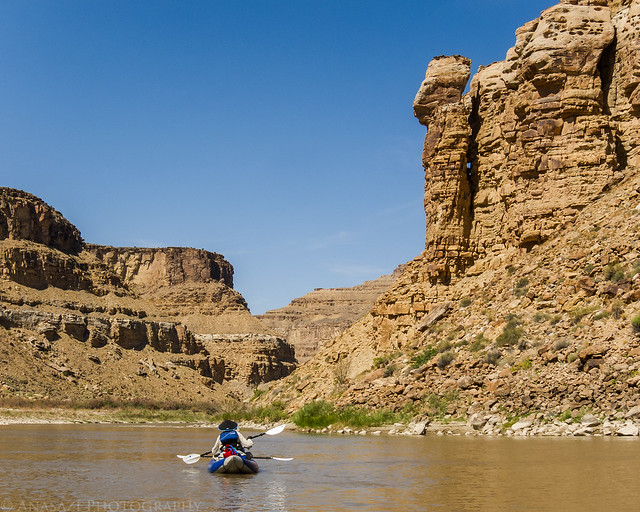 As we neared the Price River, we found a place to stop so that I could search for some nearby petroglyphs. 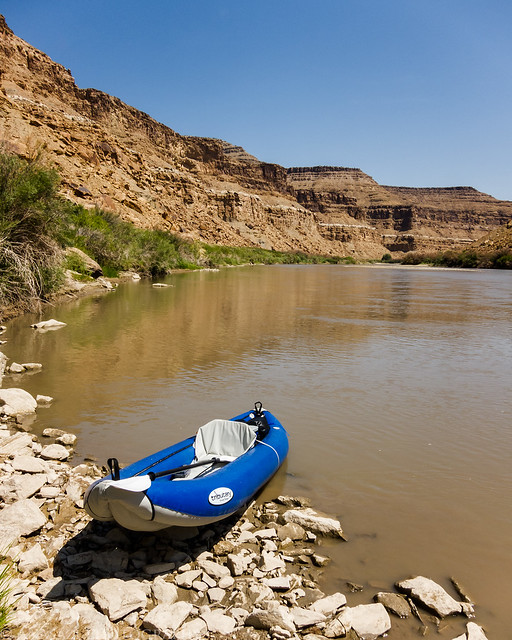 The petroglyphs were easy to find and impressive. 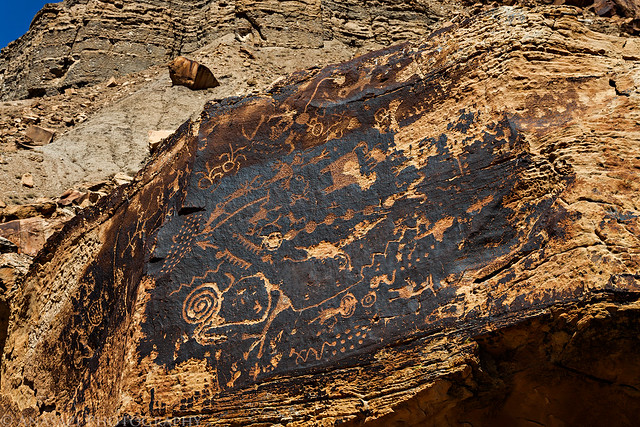 Besides the main boulder pictured above that was covered in petroglyphs, there were also a few other glyphs scattered among other nearby boulders. 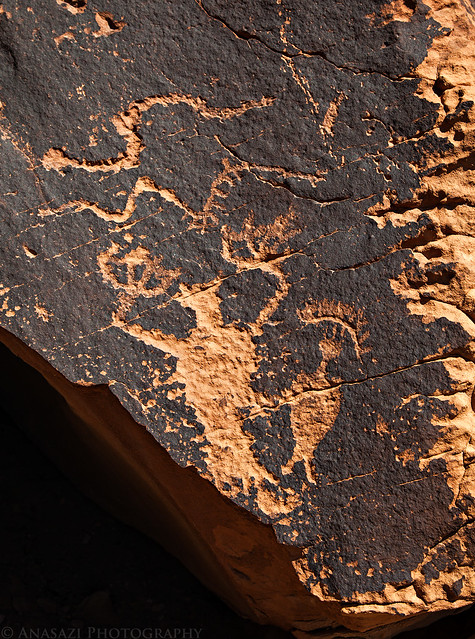 After photographing the petroglyphs and then having some lunch, we were soon back on the river. 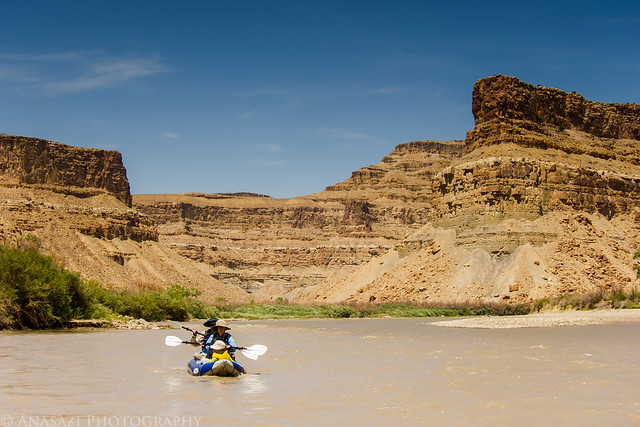 For much of the rest of the trip, we spent quite a bit of time floating in the river next to our boats instead of in them…at least when it was deep enough. It was a great way to stay cool even though the temperature was a least in the upper 90’s. It was also a good time to practice getting back into my boat when I couldn’t touch the bottom of the river with my feet…which is surprisingly more difficult than it looks!

I took this photo over my inflatable kayak as I floated behind it…and I even managed not to drop my camera in the river. 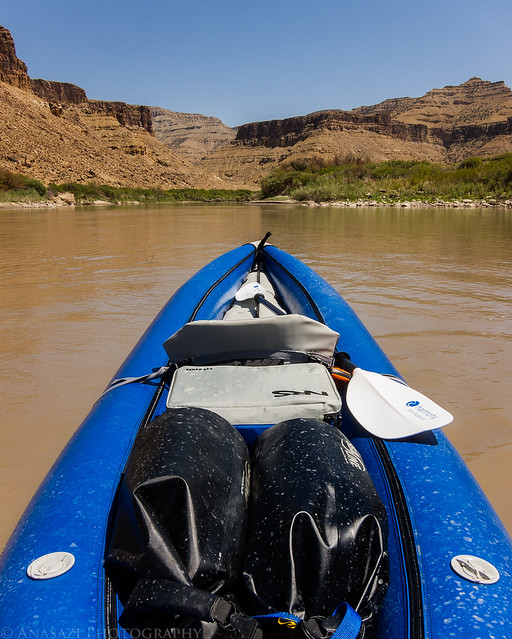 After passing through Swaseys Rapid, which would have been a lot more fun if the water levels were up, we finally reached the takeout. Jackson and I hopped in my Jeep and went to go pick up his Prius. His luck on the way back would not be as good, because he managed to get stuck in a section of soft sand. I was able to pull his car out with my Jeep, once we figured out a place to hook up the strap that wouldn’t break anything.

On our way back to the takeout, I stopped to take a few photos of petroglyphs that I have visited before, including this panel of elk or deer. 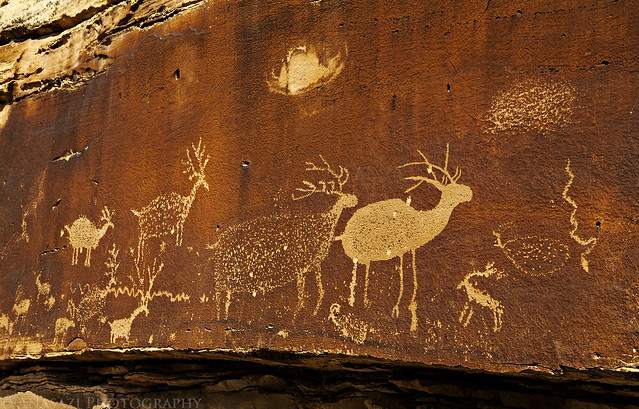 The petroglyphs found on this large boulder are pretty large and interesting. 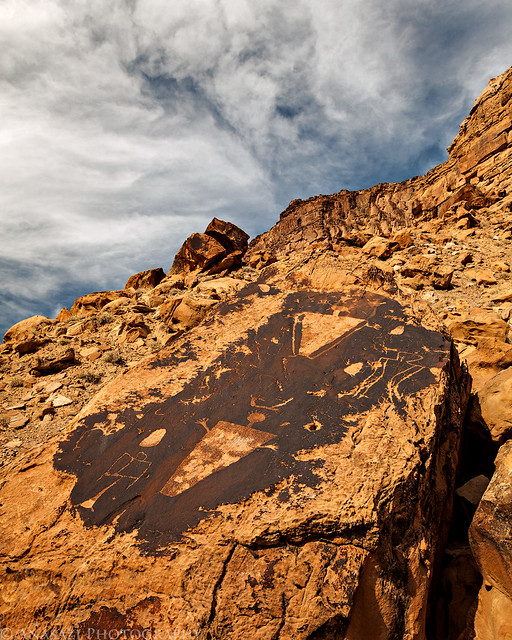 When our boats were loaded up we went separate directions. Jackson and his family headed back home to Grand Junction, while I planned to spend the night on the Island in the Sky so that I could take some photos at sunset and sunrise. I drove that direction, after I stopped at Ray’s Tavern for a burger in Green River.

After my dinner in Green River, I finished the drive to the Green River Overlook in Canyonlands. It has been quite a while since I’ve stopped here, and I was hoping for a nice sunset. Here’s the last sunlight of the day illuminating the White Rim below, before the sun disappeared behind some clouds for the rest of the evening. 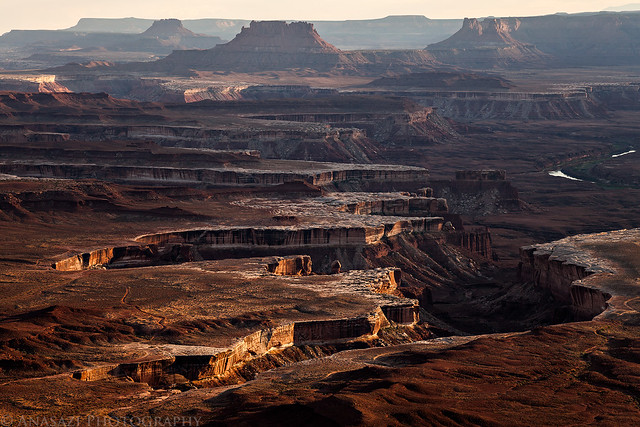 The sun may not have been out for a spectacular sunset, but I still like the eerie mood of this photo…which is a bit different from my normal photos. 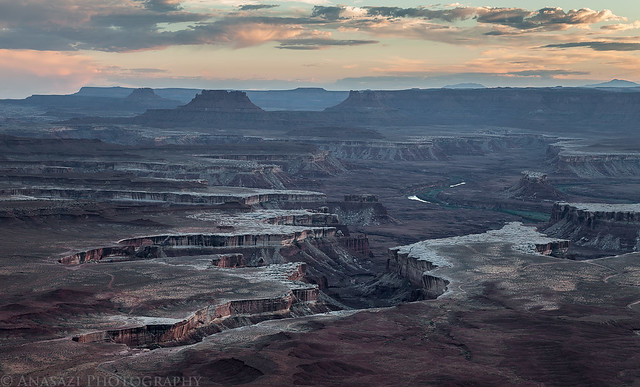 After finding a place to camp outside of the park, I quickly got to sleep so I could wake up early and get over to Marlboro Point to catch the sunrise.

The skies were clear the next morning, which allowed the early morning light to strike the canyon rim, buttes and spires below. 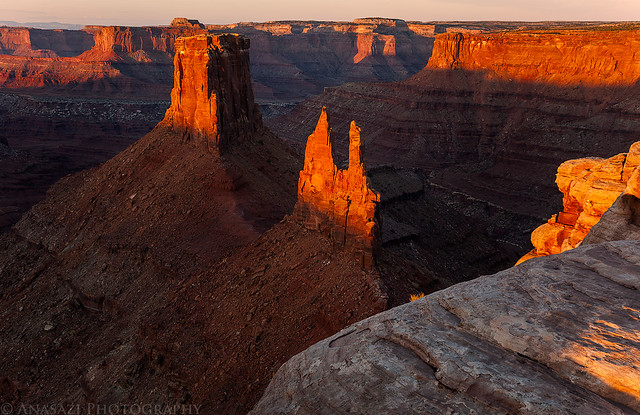 An intimate photo of the Crows Head Spire bathed in warm morning light. 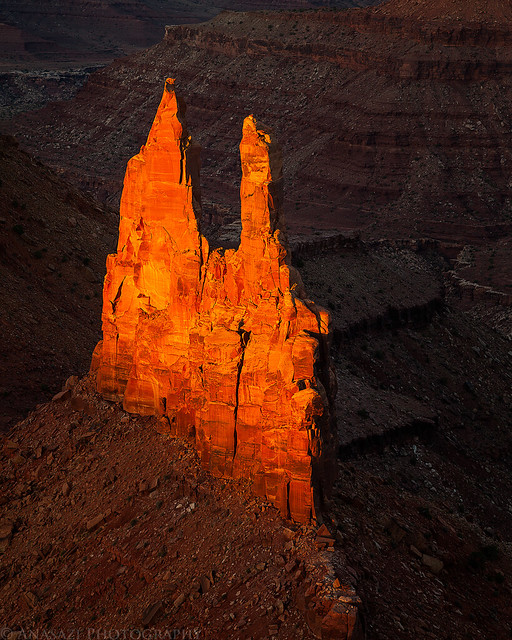 When the sunrise light show was over, I got back in my Jeep and drove back home. Amanda’s sister was in town for the week, and we were planning on taking a drive up on the Grand Mesa in the afternoon…so I ended up visiting another ‘island in the sky’ a few hours later. After driving up Lands End Road to the observatory, we stopped to visit the chipmunks and I took a few photos, too. 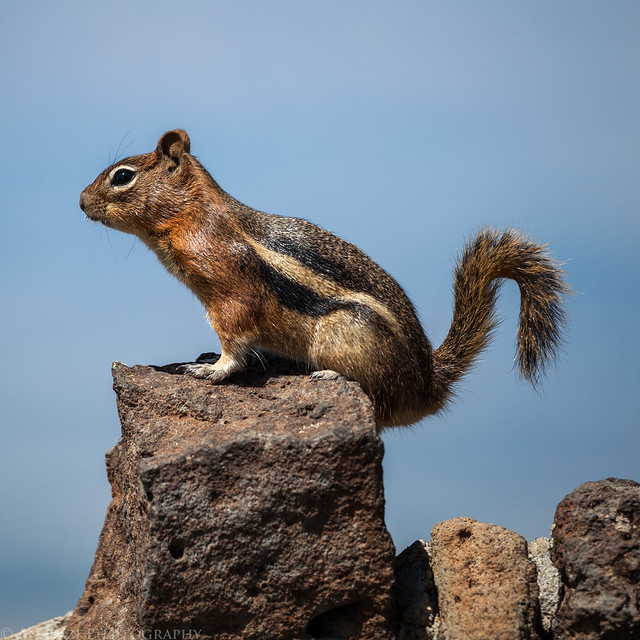 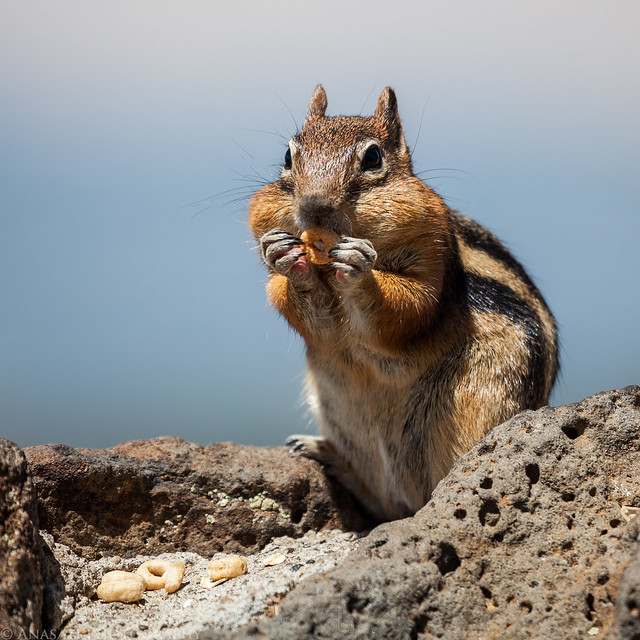 It turned out to be another great weekend that started on a river in Utah and ended up on a 10,000 foot flat top mountain in Colorado. You just can’t beat that!

>> Gray Canyon and the Island in the Sky Photo Gallery