I left after work on Friday, grabbed a quick dinner and headed south to the San Juan Mountains. As I was approaching Ridgway in the early evening I could see that the entire Sneffels Range was almost completely obscured by smoke in the air. I’m not sure where it was coming from, but it looked pretty thick and when I reached Ouray I started to smell the smoke.

On my drive to Red Mountain Pass I stopped for an evening smoky view of the Red Mountains over Crystal Lake. 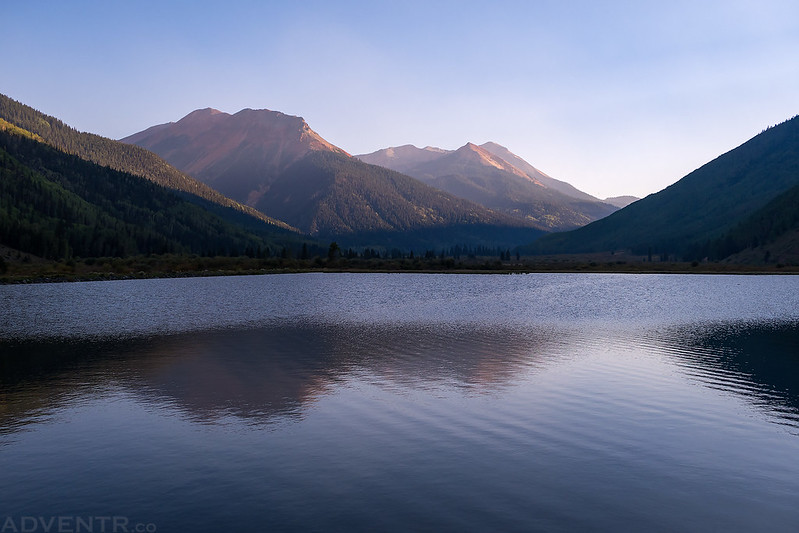 As I drove up into Mineral Basin I had a very smoky view over to the Uncompahgre Wilderness. 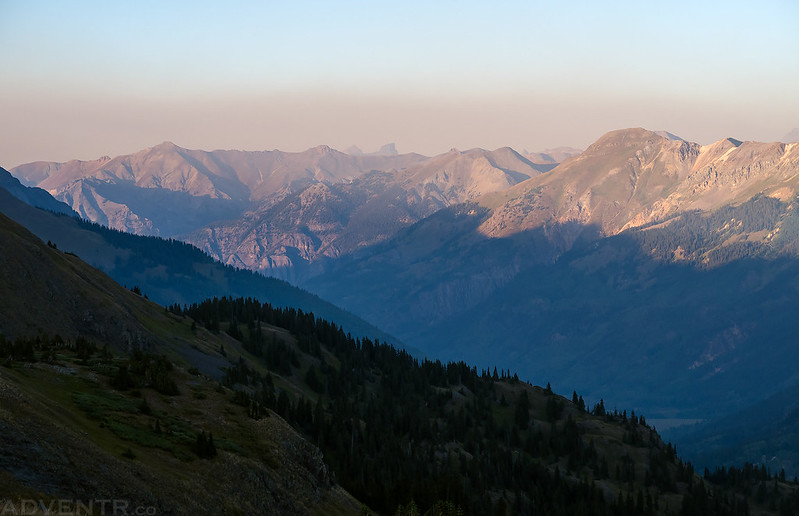 There was less smoke looking south to the Weminuche Wilderness over Anvil Mountain. 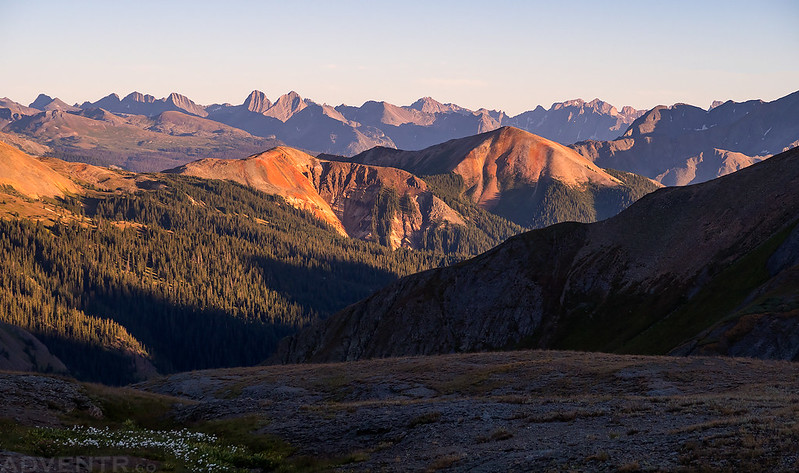 Soon I reached Black Bear Pass at 12,840 feet and started driving down into Ingram Basin. 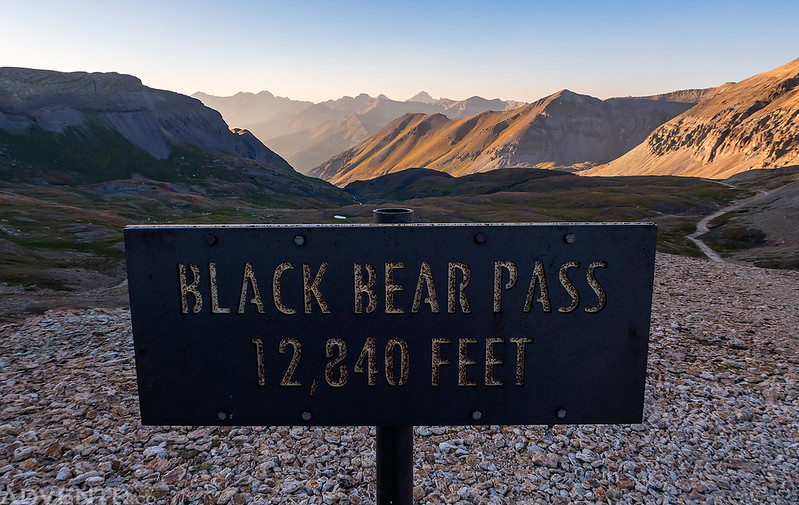 There was a smoky view of the distant mountains including Mount Sneffels (14,150) on the horizon. 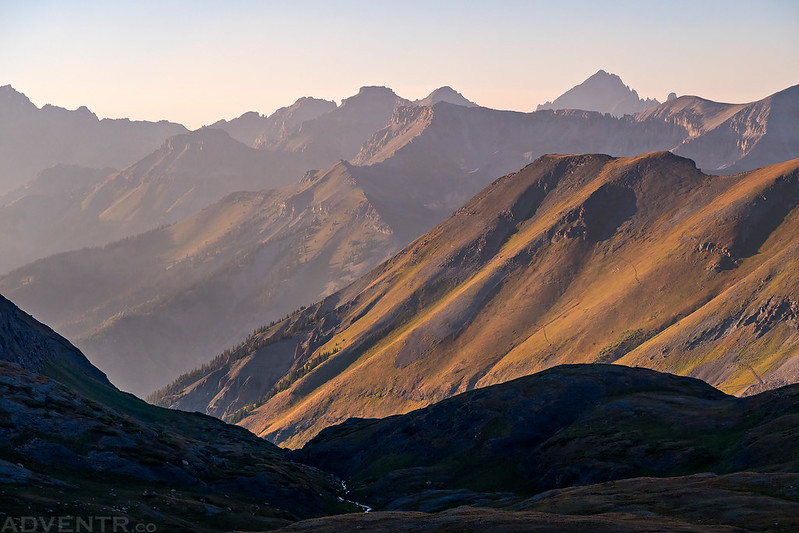 As I drove further down into Ingram Basin the sun started to set and the warm light mixing with the smoke made for some very colorful conditions. I stopped frequently to take photos along the way. 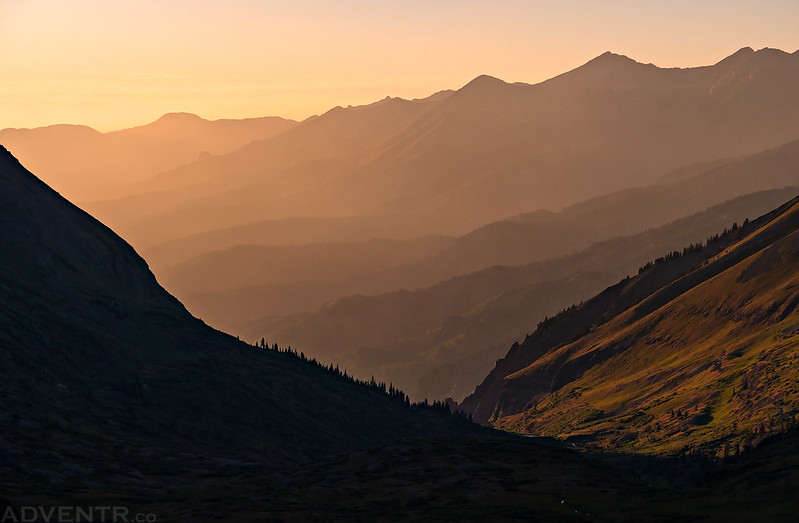 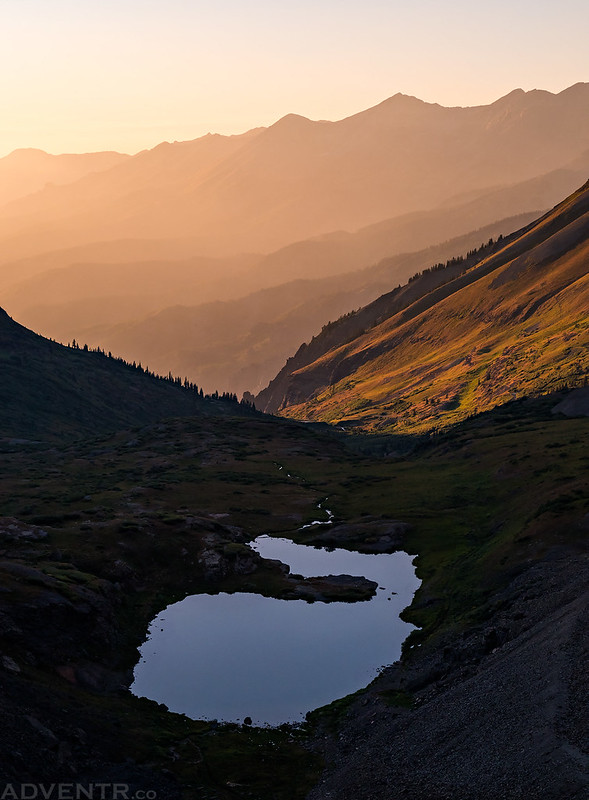 Driving down the Black Bear Pass Road with Trico Peak (13,321) in the light behind my Jeep. 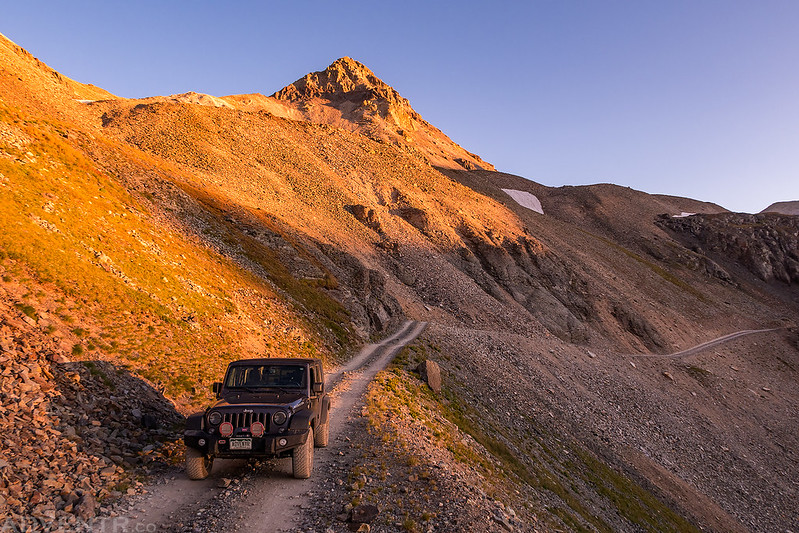 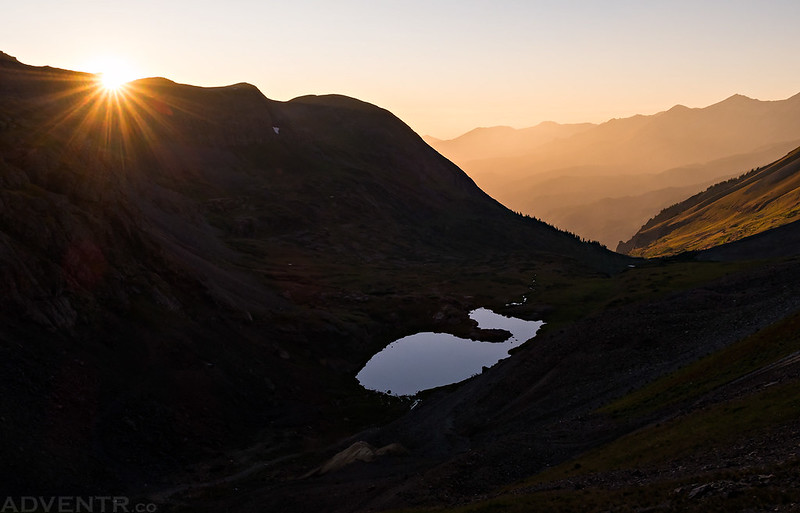 Ajax Peak, my destination for Saturday morning, is the point in the upper right of this photo. If you look closely you can see the trail switch-backing up the slope. 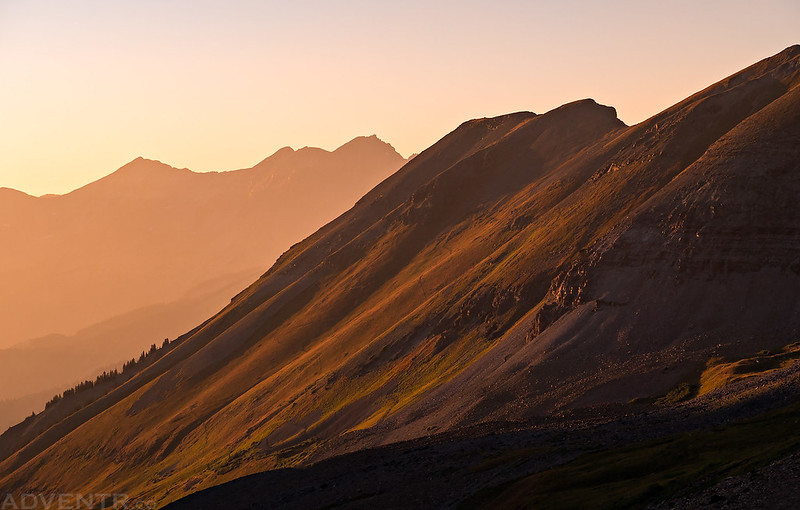 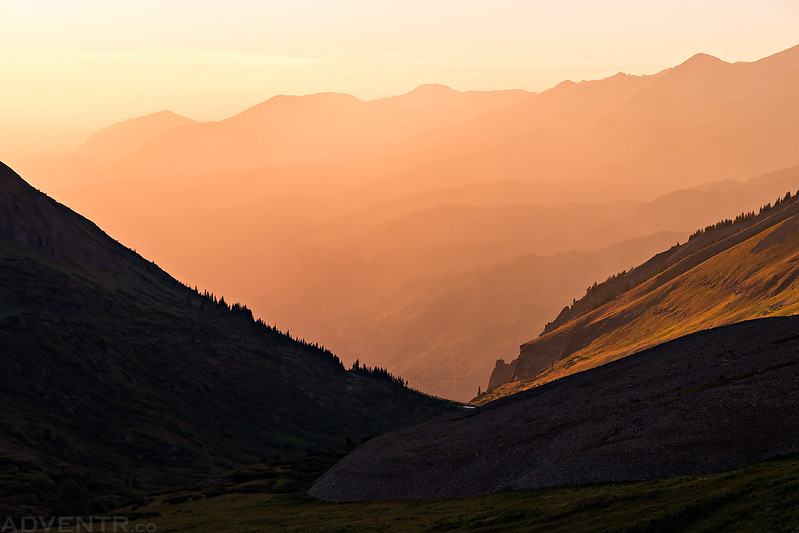 The warm light was pretty amazing this evening. 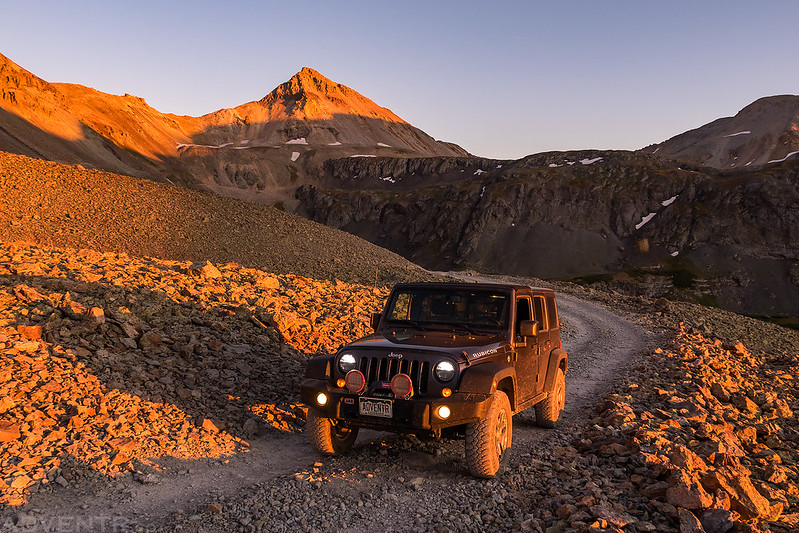 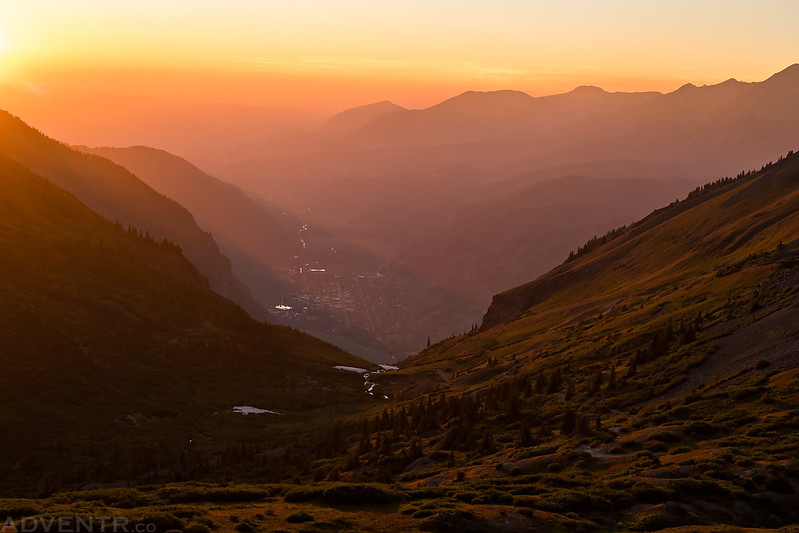 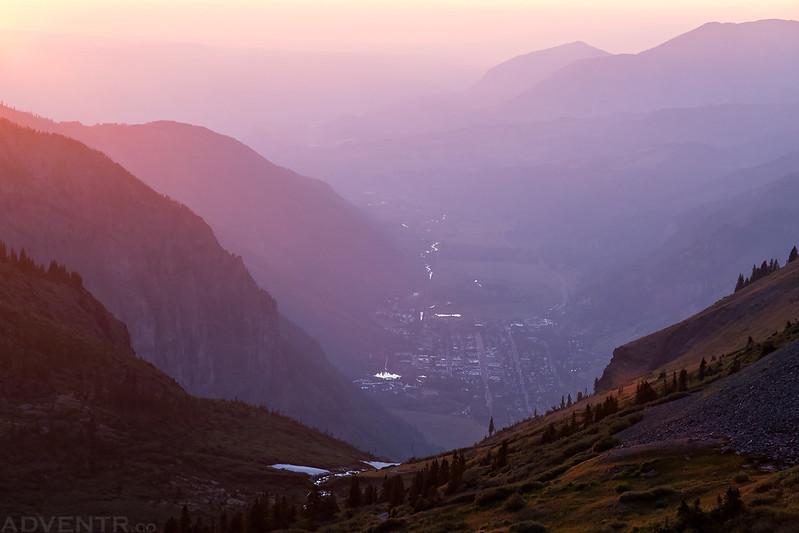 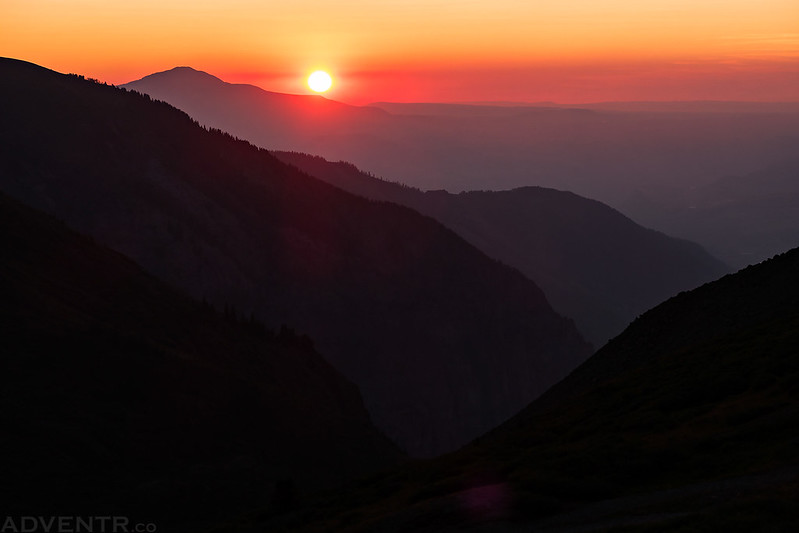 I found a spot to spend the night shortly before reaching The Steps, which is where the one-way section of the Black Bear Pass Road begins. And since I had no desire to drive down into Telluride on Saturday, I made sure not to go any further. I had a nice view of Telluride from my campsite and watched the full moon rise on a Friday the 13th. Apparently this does not happen very often. As I was trying to get to sleep I could hear music echoing in the canyon below and later learned that this weekend was the annual Telluride Blues & Brews Festival.

I woke up before sunrise on Saturday morning to a brisk 39 degrees outside and it appeared that most of the smoke had cleared out overnight. I started hiking shortly before sunrise and watched the Harvest Moon set on the horizon as I climbed the switchbacks to the summit.

The Earth Shadow over Ballard Mountain (12,804) as I left the road and started up the trail. 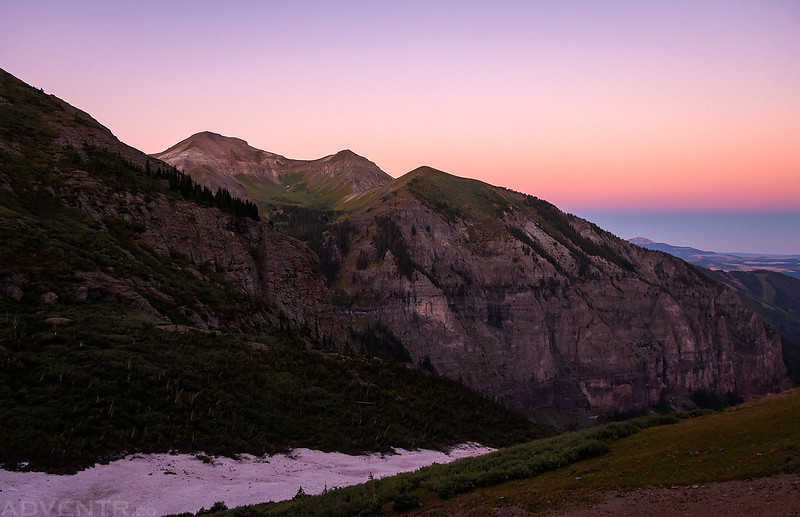 I watched the full moon set next to Lone Cone and Little Cone as I hiked up the many switchbacks of the trail. 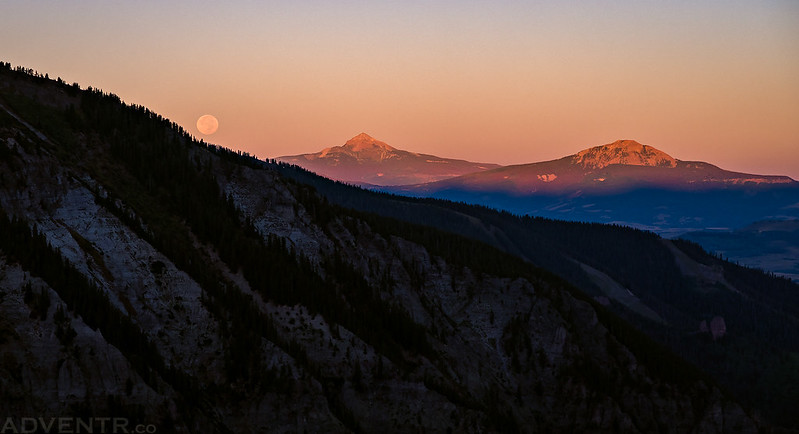 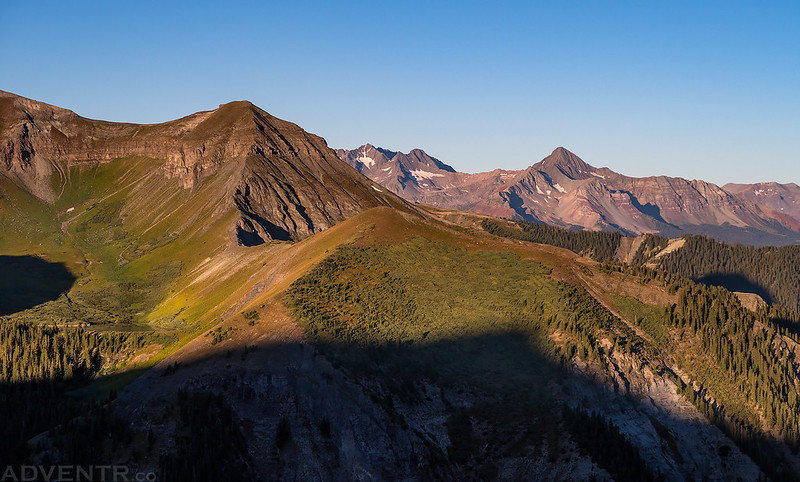 Looking down to Bridal Veil Falls, the tallest free-falling waterfall in Colorado, and the power plant building that sits above them. 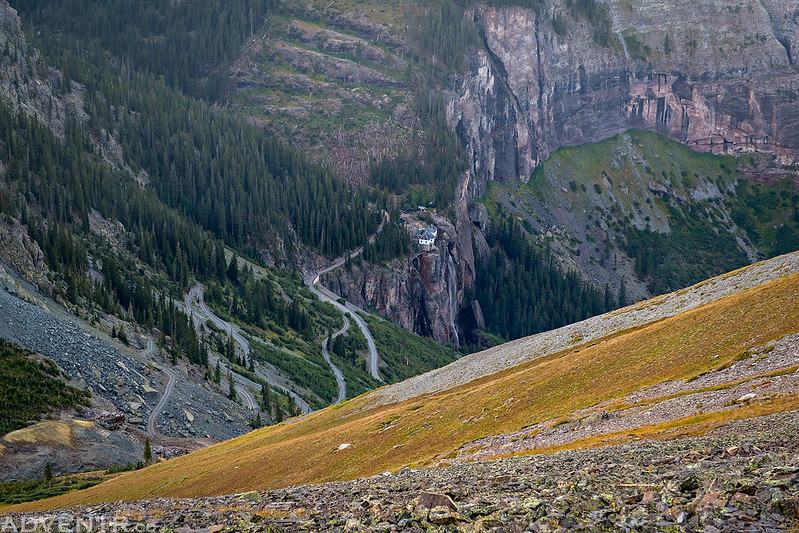 As I climbed higher I got a better view of the San Miguel Mountains including Mount Wilson (14,246). 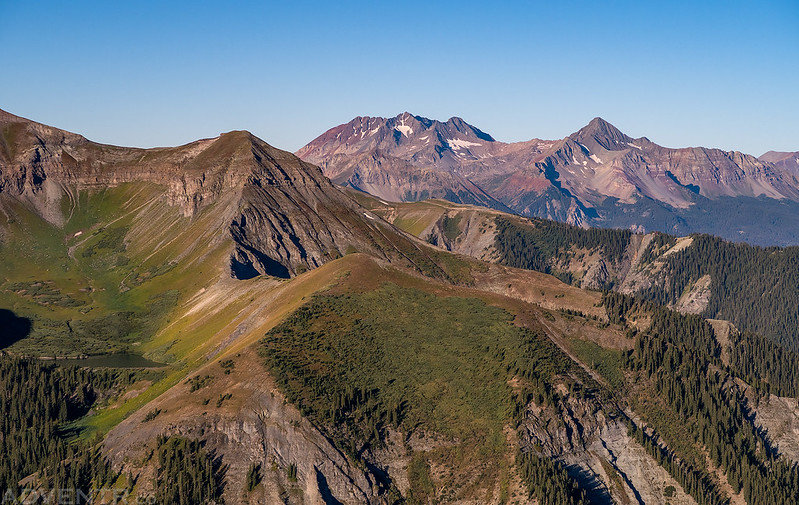 I liked the warm and cool tones on these cliffs along the ridge above Savage Basin. 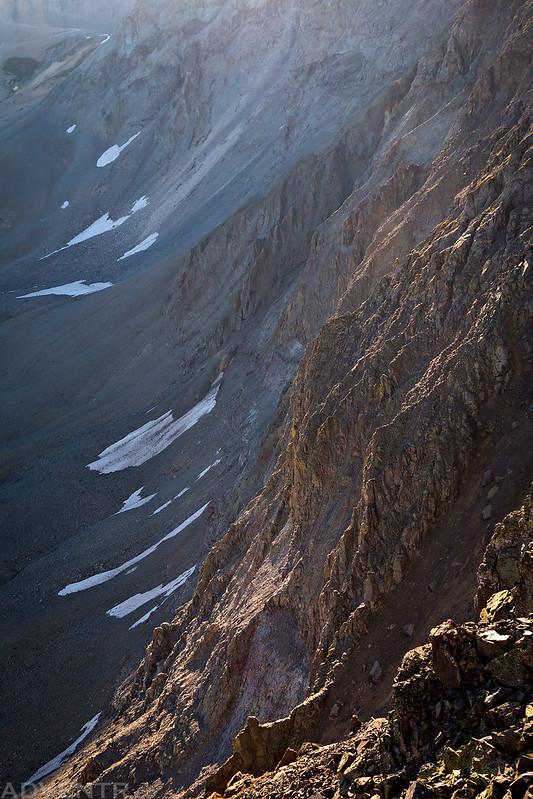 Following the ridge to the summit of Ajax Peak. There is a well-used trail visible on the left. 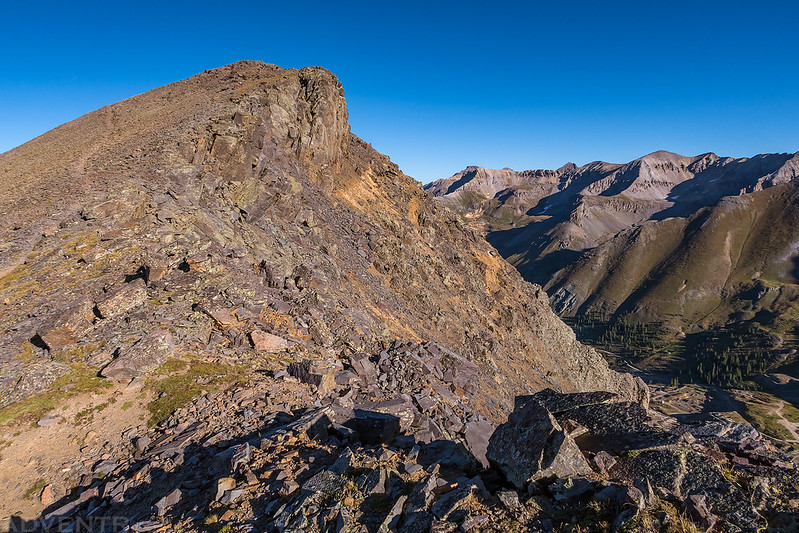 After hiking to the high point of the mountain, I continued on to the end of the ridge where there was a much better view. 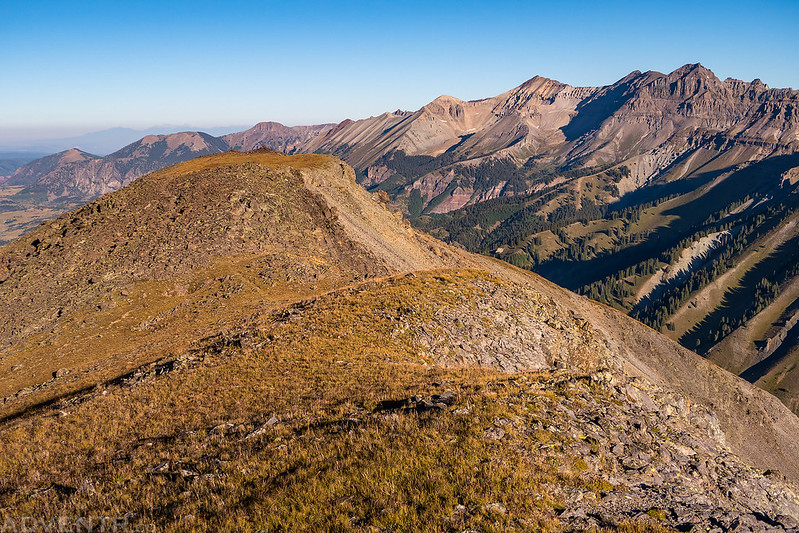 The pointy shadow of Ajax Peak was pointed right toward the town of Telluride when I arrived. 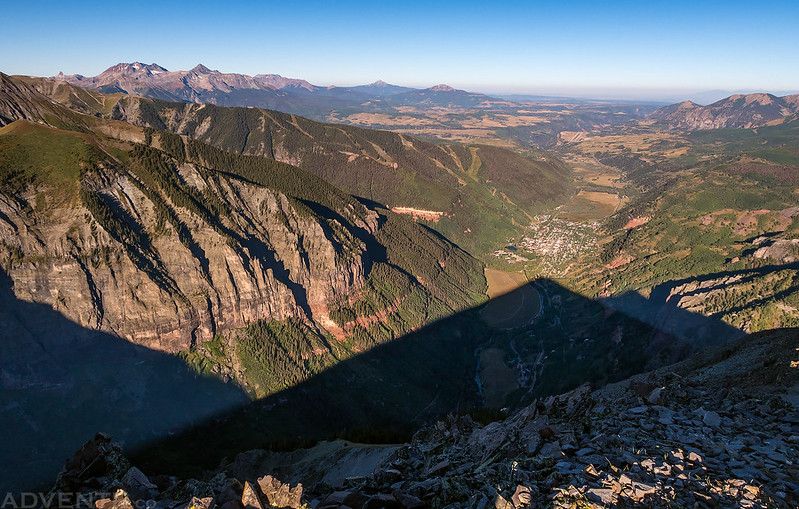 A view down into Savage Basin as I hiked along the ridge on my way back. I’ve driven through there many times on the Imogene Pass Road, but it’s been a while… 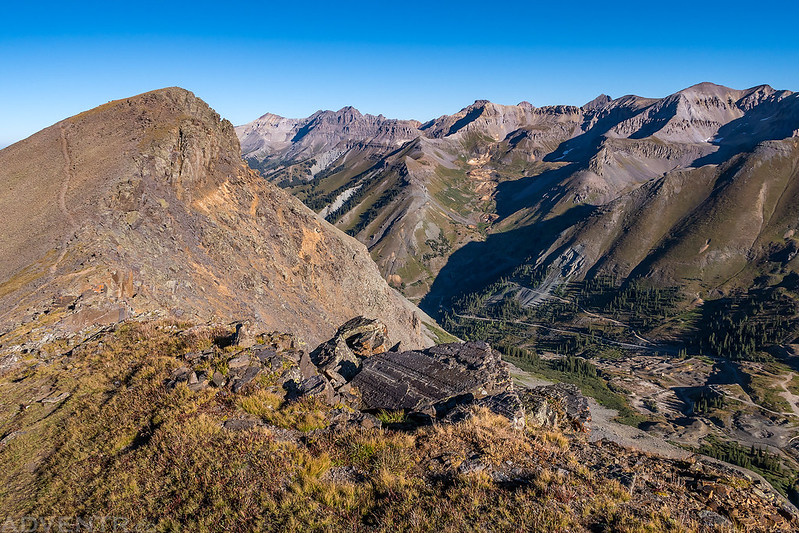 Following the trail back down to Black Bear Pass Road. 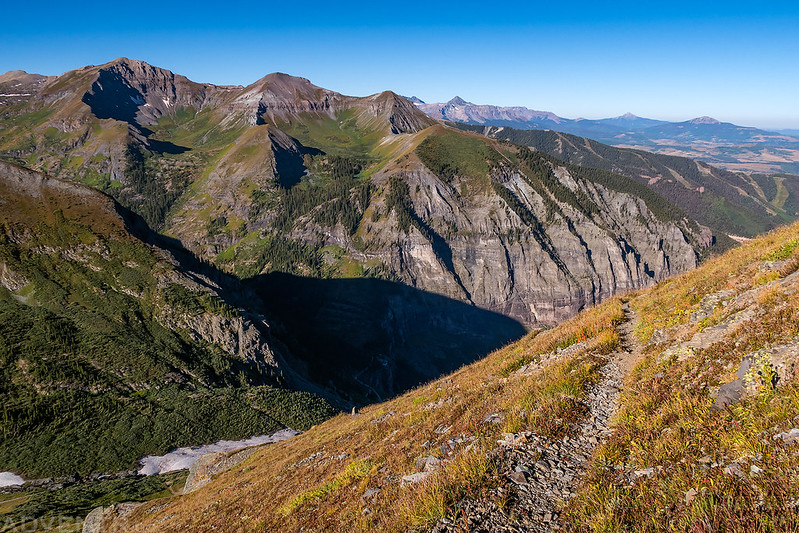 After returning to my Jeep I drove back over Black Bear Pass and headed back home. It was another short but sweet visit to the San Juan Mountains!