As we hiked through the canyon we came across this interesting section of ice. There were two layers of ice, the top part was thin and white and the lower portion was solid and crystal clear. 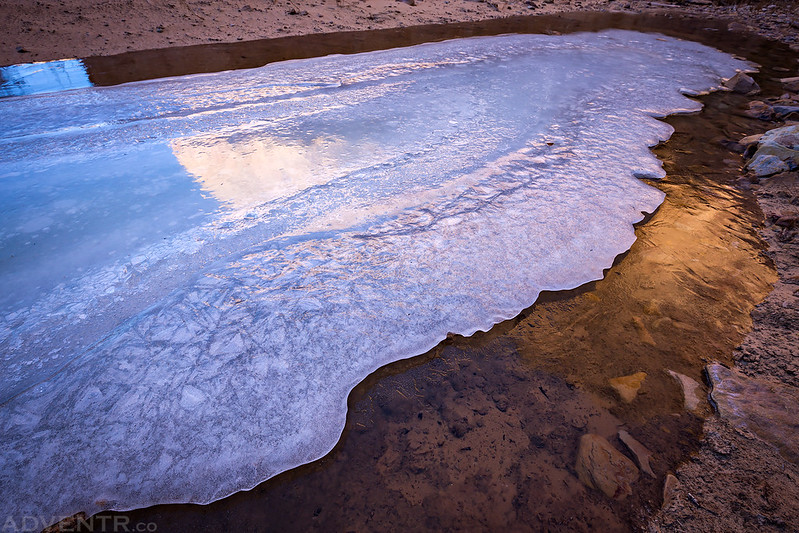 A leaf frozen on the top surface. 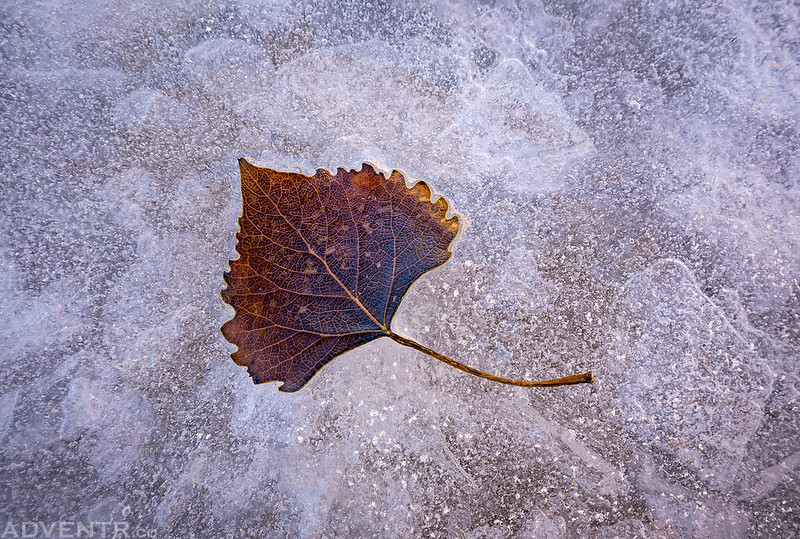 Bubbles frozen in the ice. 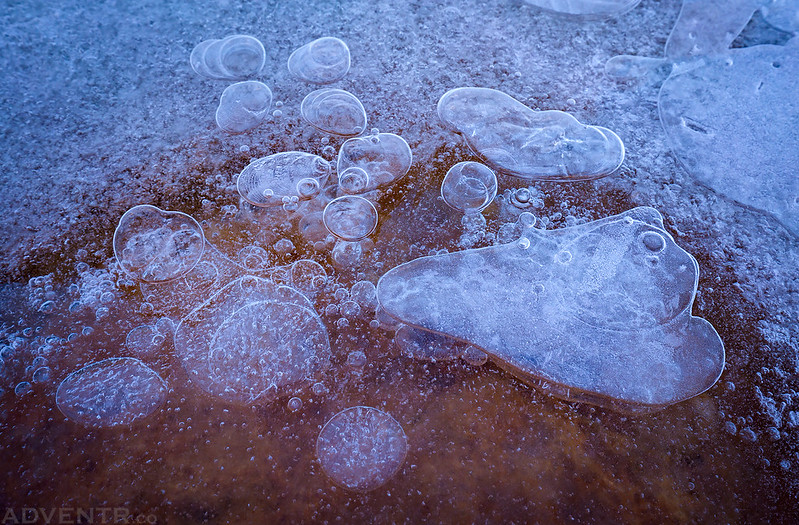 Here’s a nice petroglyph panel I missed on my first visit to this canyon. It was a tough one to photograph in the sunlight, though… 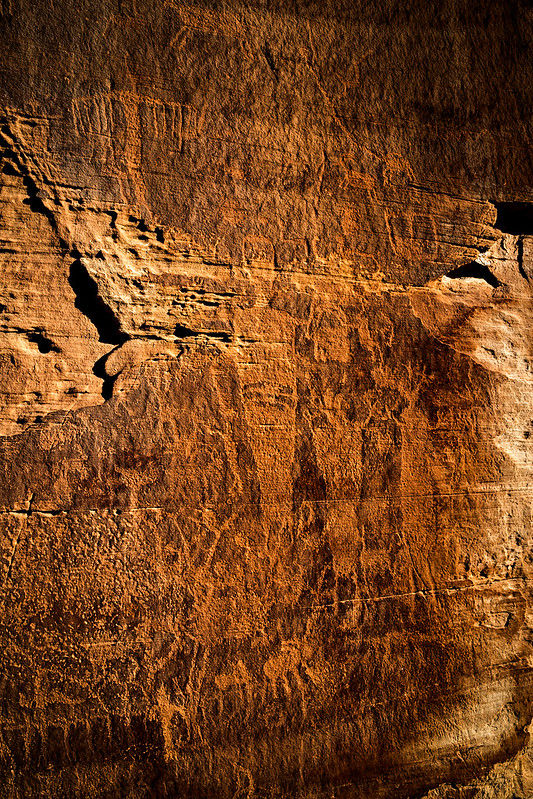 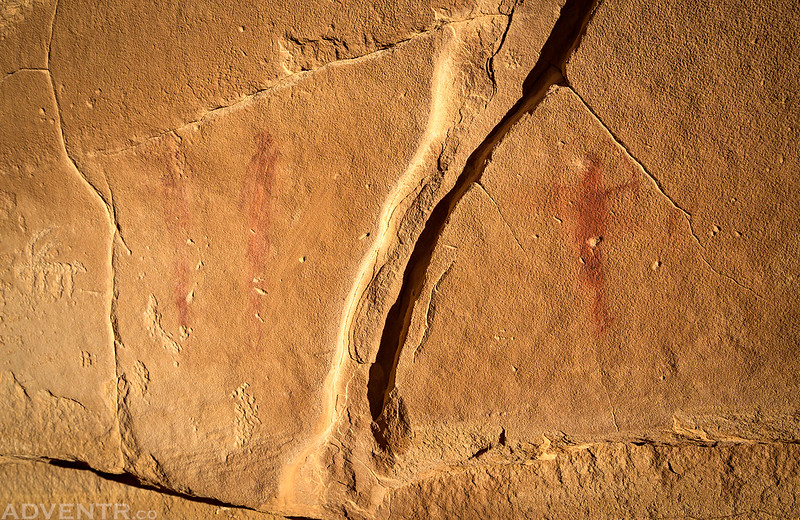 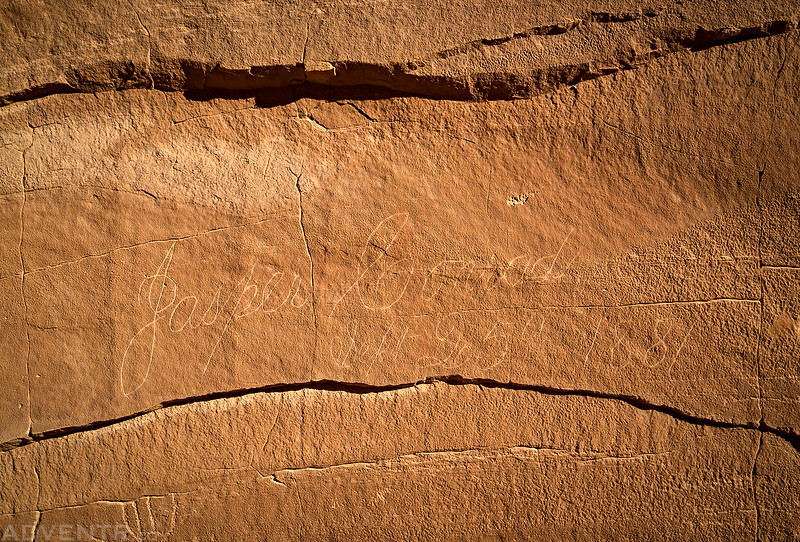 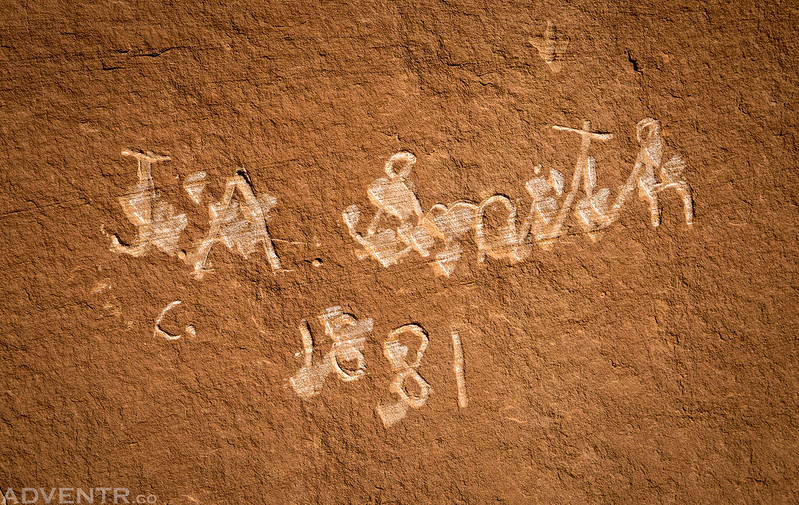 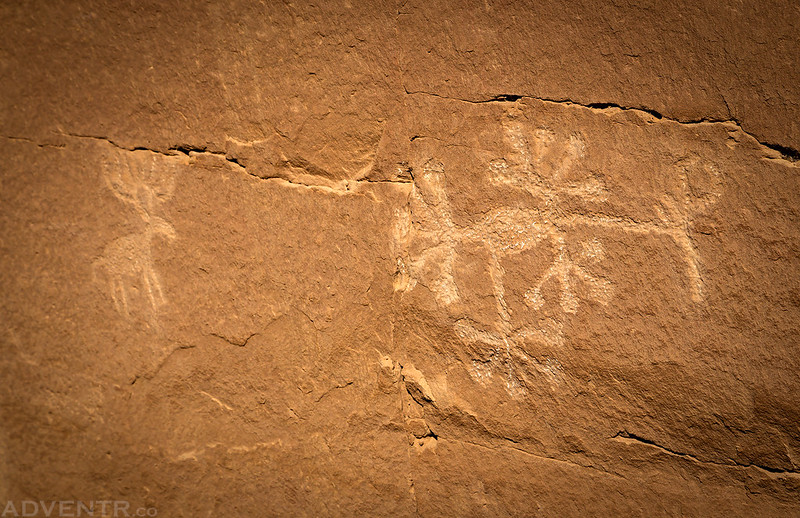 The canyon wall and sky reflected on a thin sheet of ice. 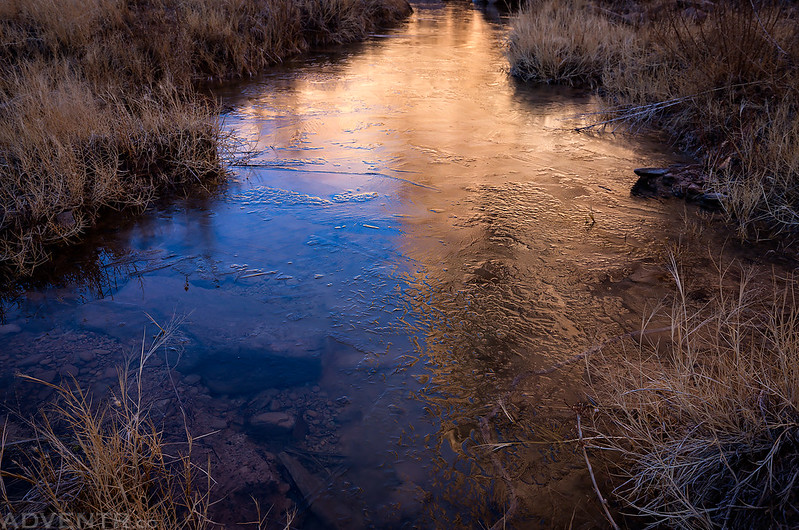 A view up Cottonwood Wash. 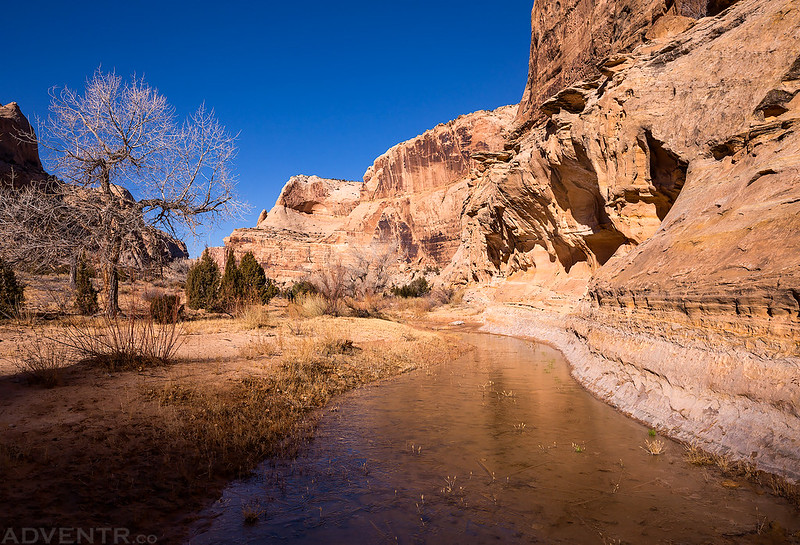 Sandstone designs in the canyon. 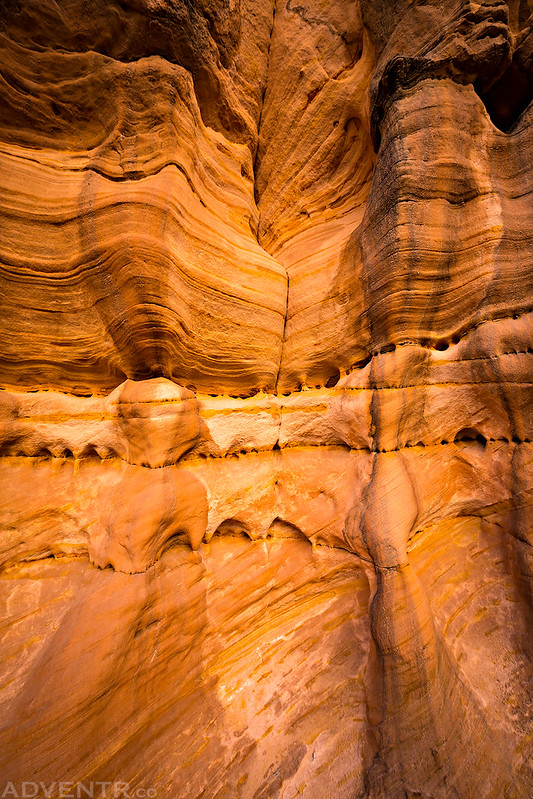 After returning to my Jeep at the mouth of the canyon we drove south along Tidwell Draw and parked at the very end of the road so we could hike along the San Rafael River and into Thompson Hole.

Looking down into Thompson Hole, an abandoned meander of the San Rafael River, from the rim of the canyon. 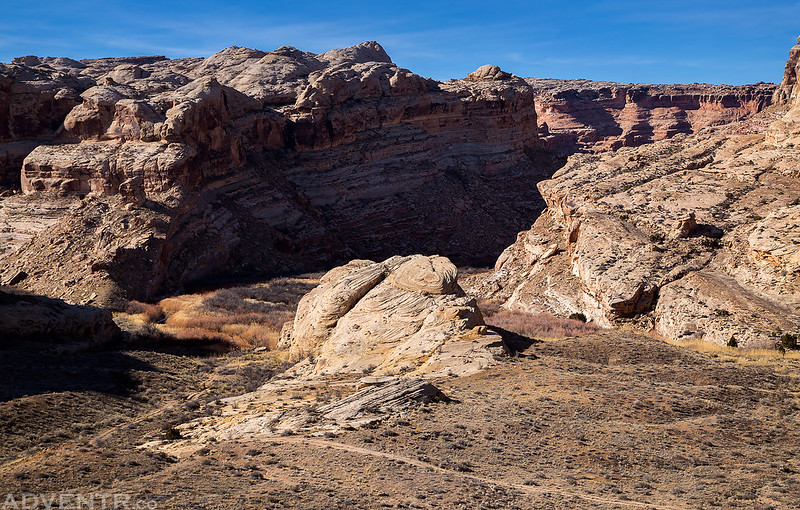 A small petroglyph panel found in the rincon. 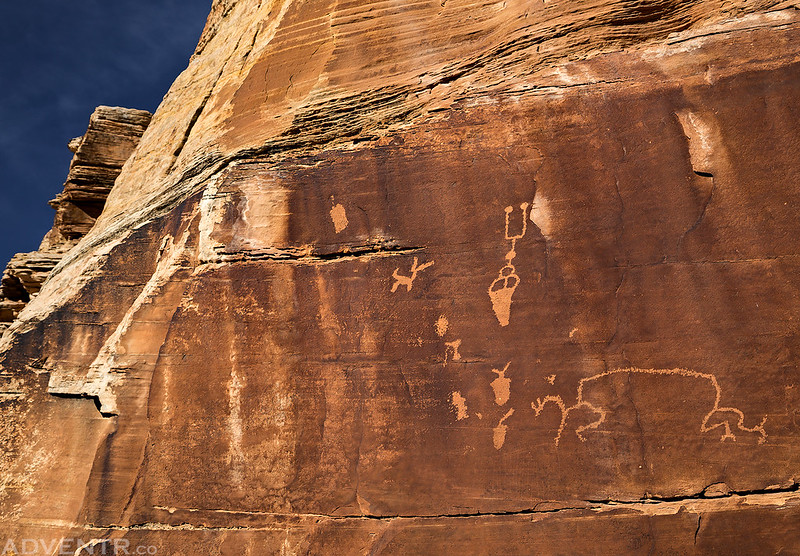 Hiking along the San Rafael River. 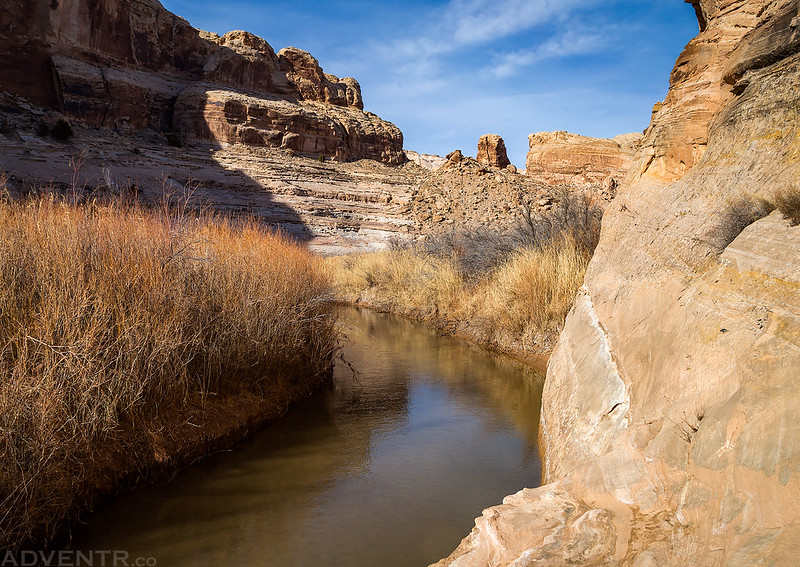 A small red pictograph I spotted. 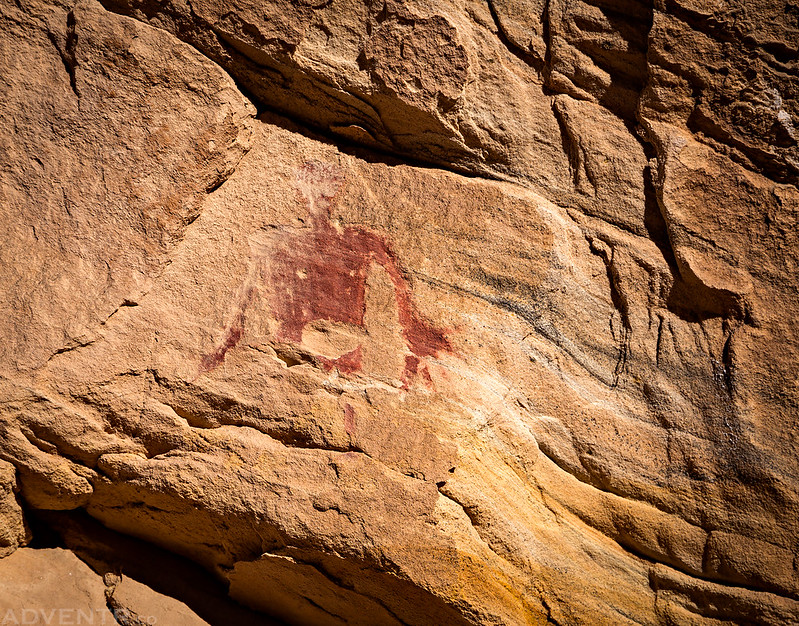 A nice panel of petroglyphs along the river, but difficult to see. 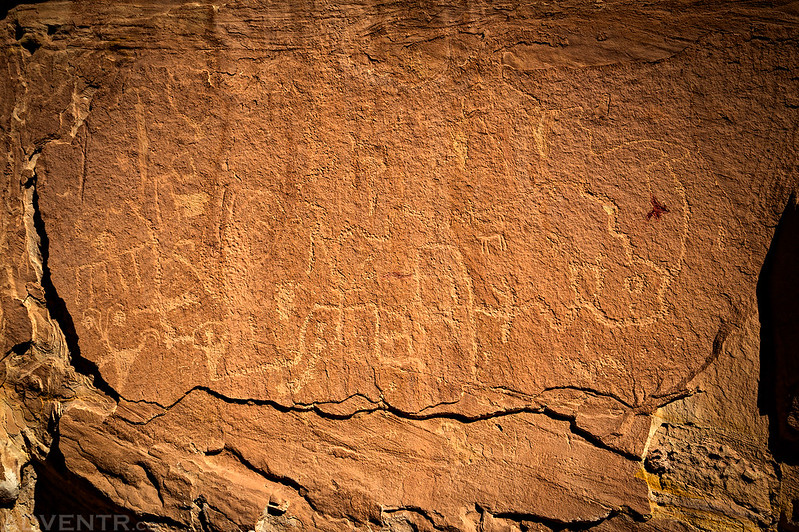 Here’s a small group of Barrier Canyon Style pictographs we visited in a nearby canyon. 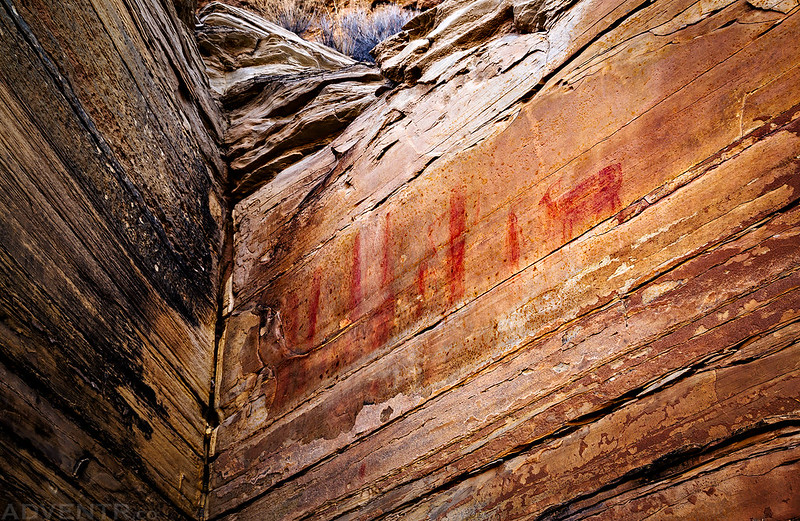 Back to my Jeep after our hike. All four wheels stayed on this weekend… 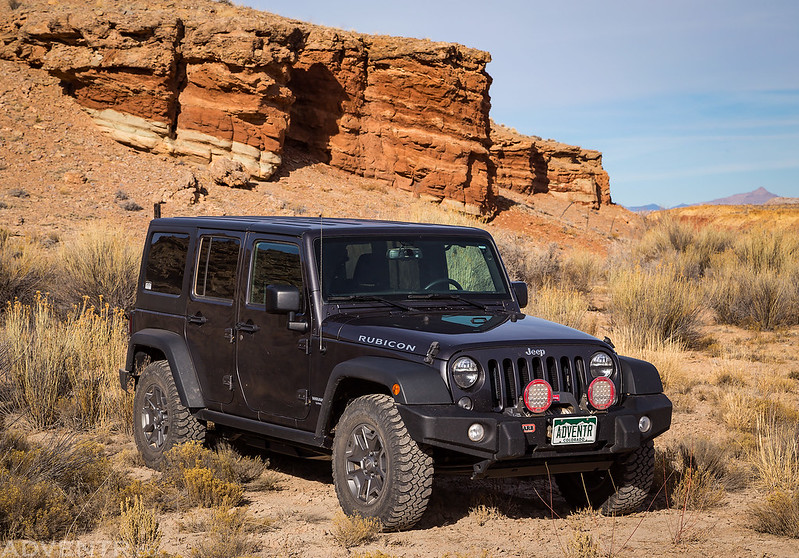 By this time there were only a few hours of daylight left so we headed back to the Smith’s Cabin and hiked up to the top of the San Rafael Reef so we could watch the sunset from an overlook of Spring Canyon and Mexican Mountain.

Our hike started near this old cabin. We didn’t actually take the Horsethief Trail most of the way up and instead we followed washes, canyons and ridges on our way to the top. 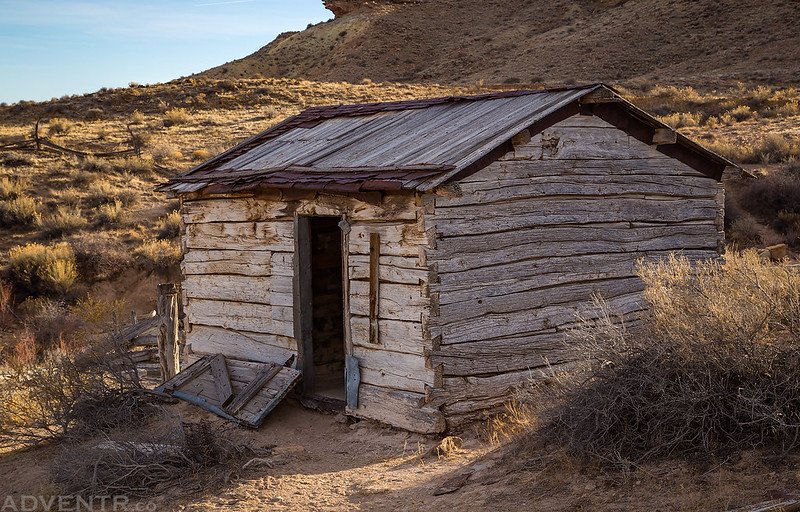 A view back toward Green River and the Book Cliffs from partway up the San Rafael Reef. 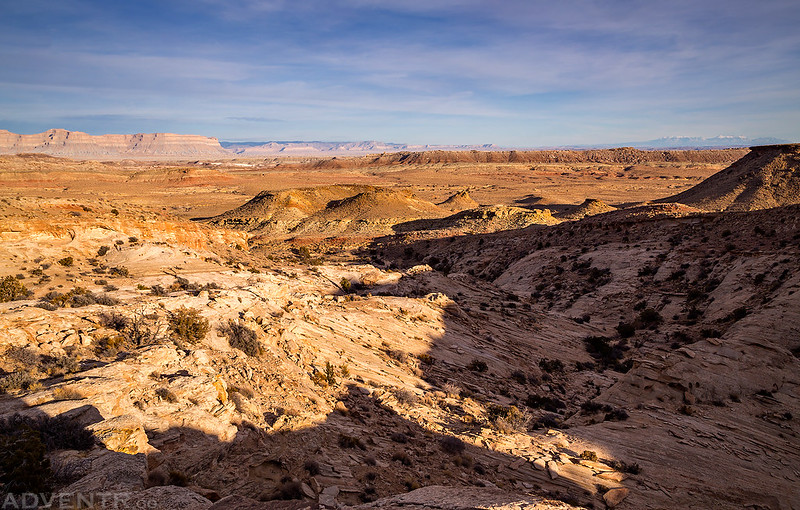 About halfway up the Reef we crossed paths with the Horsethief Trail and followed it to the edge. 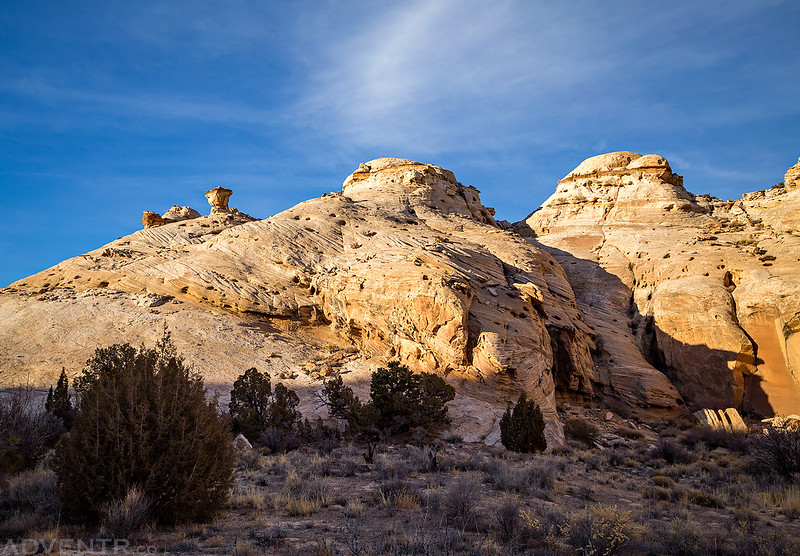 There is some pretty nice sandstone hiking in this area. 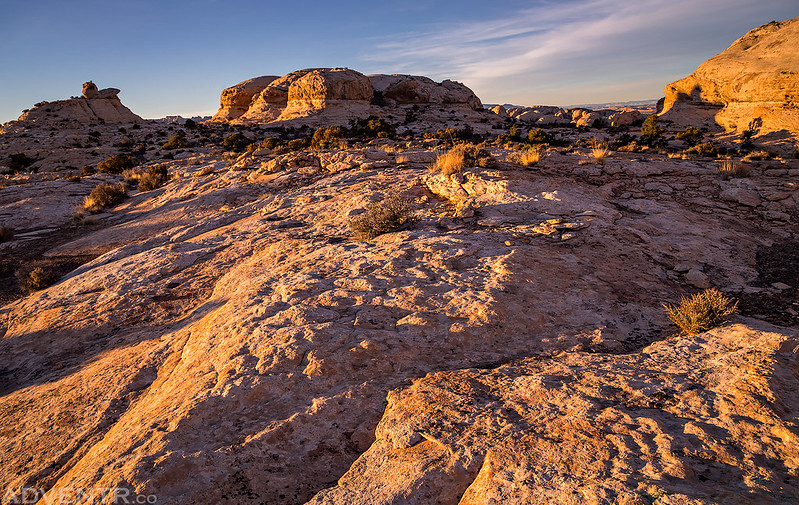 The edge of the San Rafael Reef shortly before sunset. 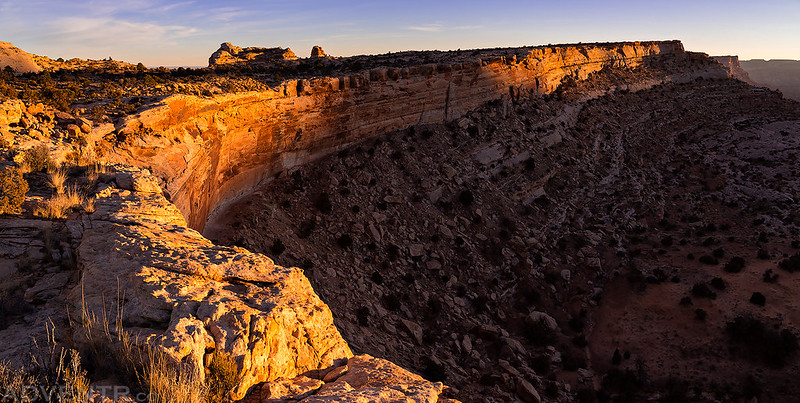 Looking down over Spring Canyon and the airstrip below Mexican Mountain. We had actually hiked down in that area last winter for my birthday. 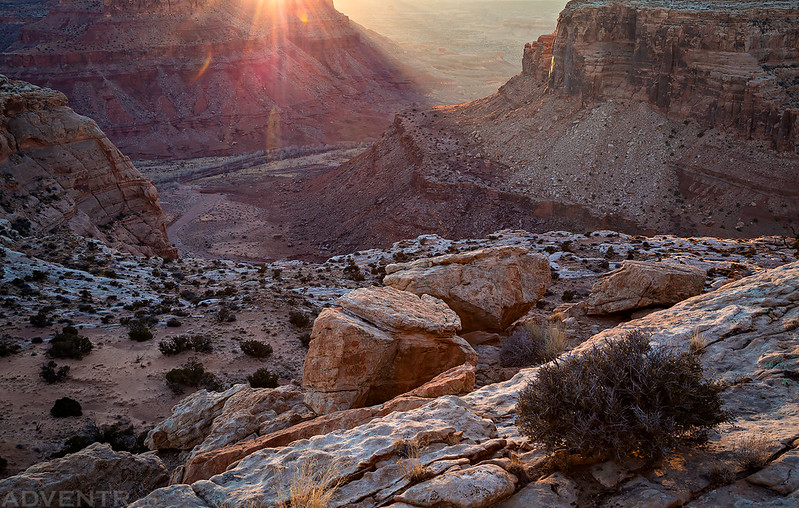 The last golden light of the day strikes the top of the San Rafael Reef as we started hiking back down. 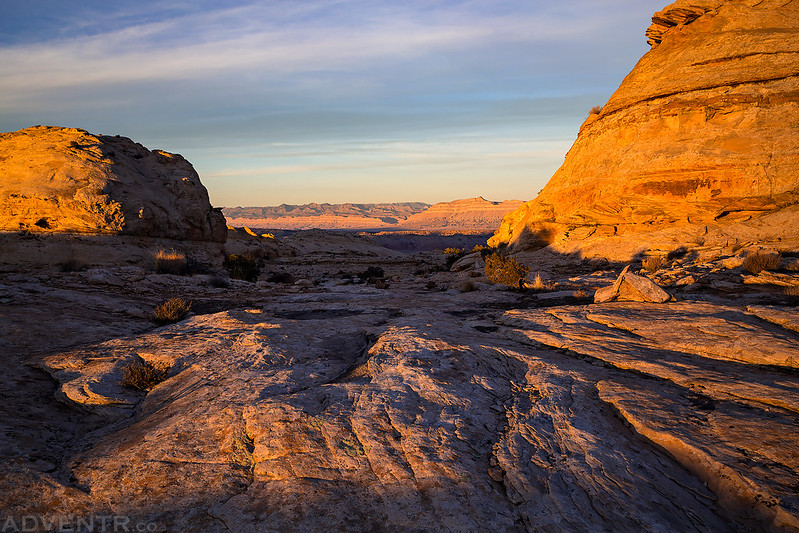 Diane hikes down the Horsethief Trail ahead of me at dusk. 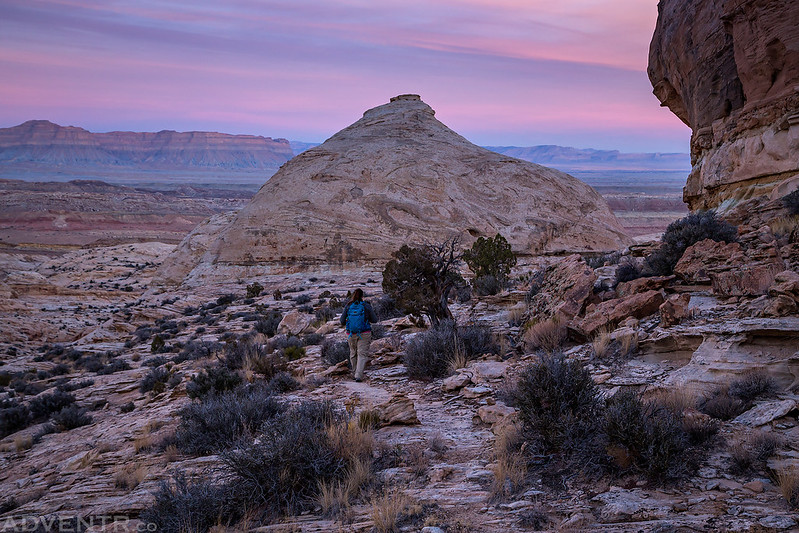 We ended the day with a colorful sunset above the San Rafael Reef as we hiked back down to the trailhead. We made it back to the Jeep just before needing to use our headlamps. 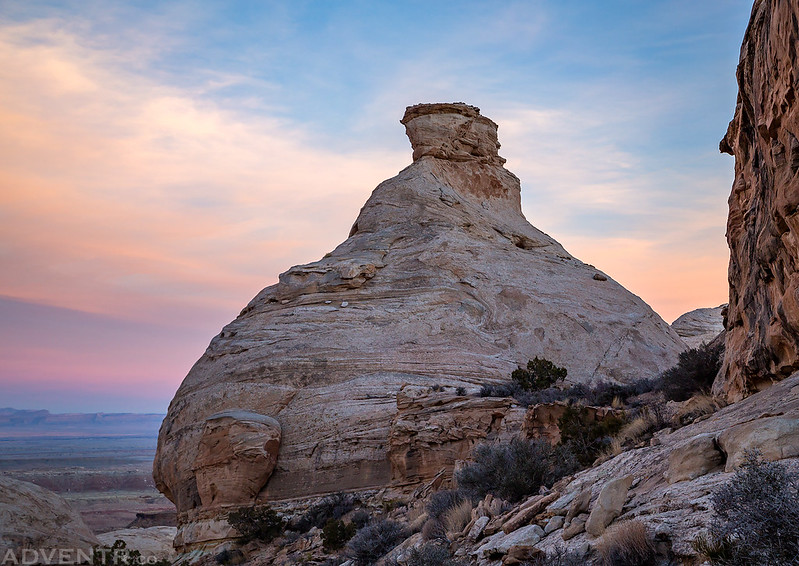 A distant view of the La Sal Mountains. 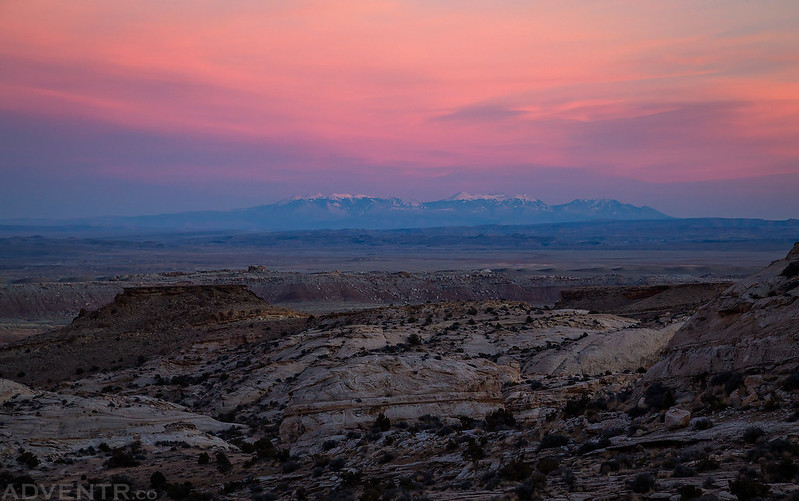 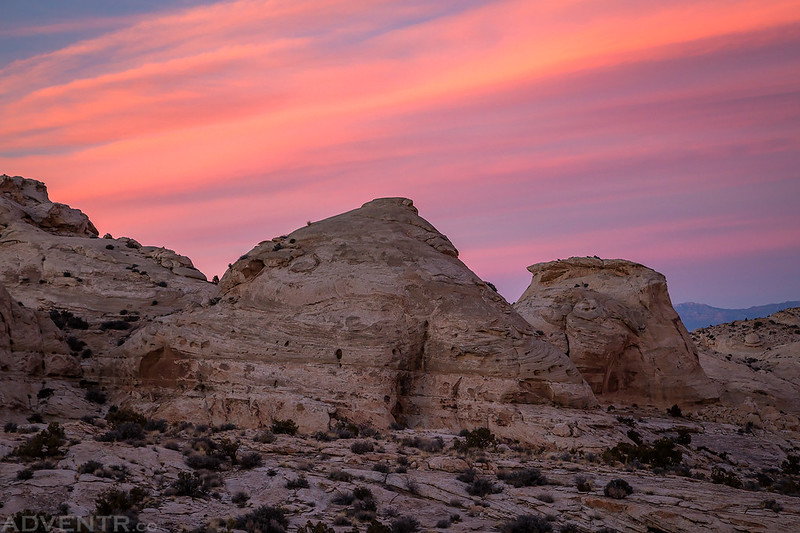 >> The Edge of The Swell Photo Gallery