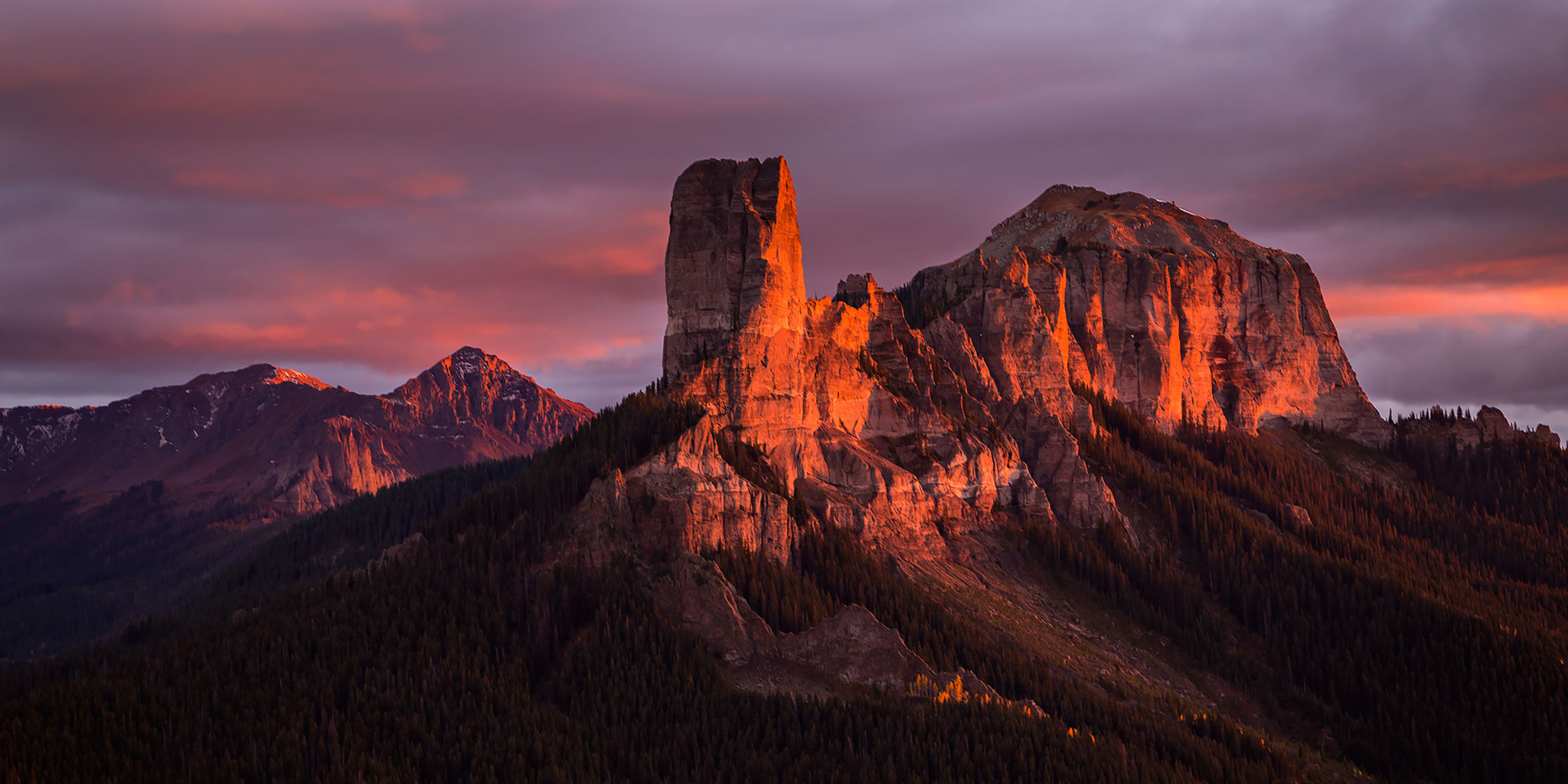 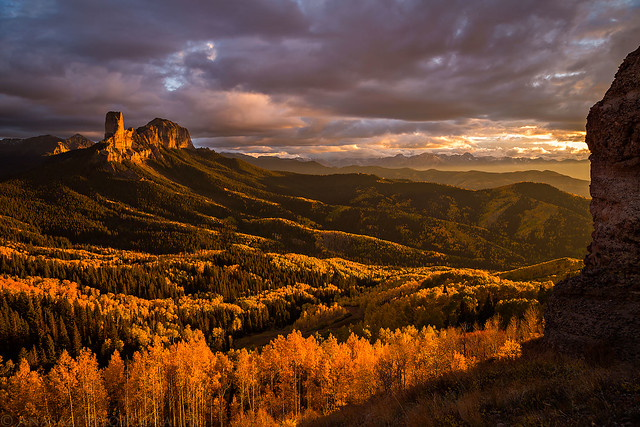 Ending the long day with a spectacular sunset above Owl Creek Pass in the San Juan Mountains.

I actually slept very well that night and had no problems waking up at 3:30am. I got my gear together and headed over to the trailhead where I started hiking around 4:00am. My goal was to reach the summit before the sunrise and I had no problems getting to the top with plenty of time to spare. As I expected, this is definitely one of the easier 14ers I’ve hiked and it’s no surprise that it’s so popular, especially since it’s pretty close to Denver. It’s been awhile since I was on a summit for the sunrise, so it was nice to watch the sun come up this morning. There were only about a dozen people on the summit with me, which is more than I’m used to, but it sure was a lot less than the 100-200 people I passed going up the trail during my descent! 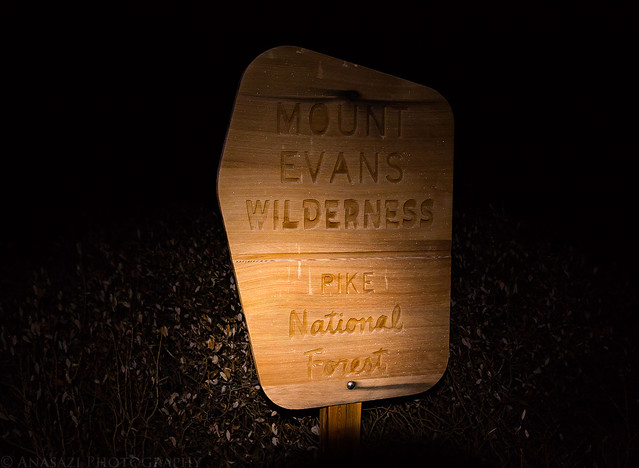 There were about a dozen people on the summit of this popular peak for sunrise this morning. 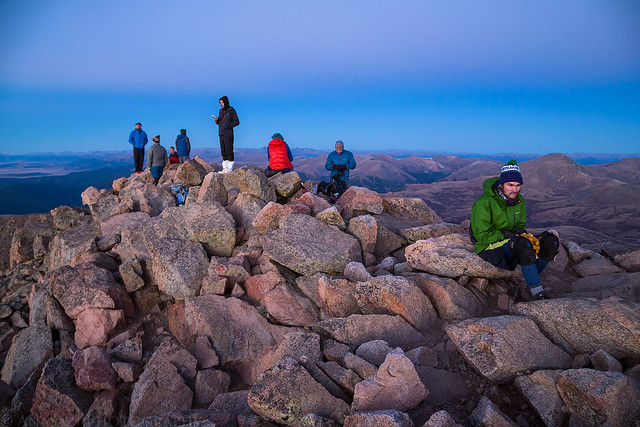 Watching the sun rise above the horizon. 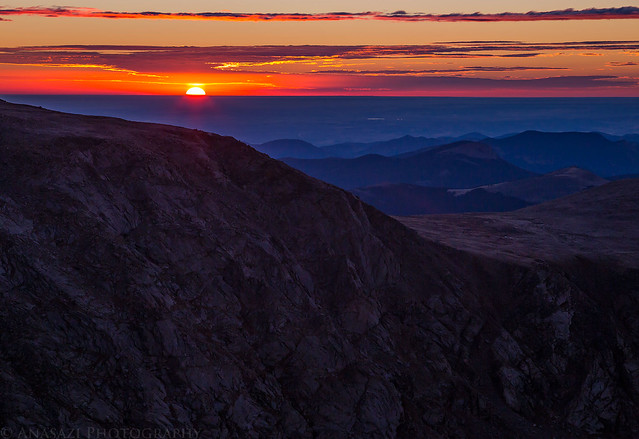 From the top I could see that there was distant fog at the southern end of South Park. 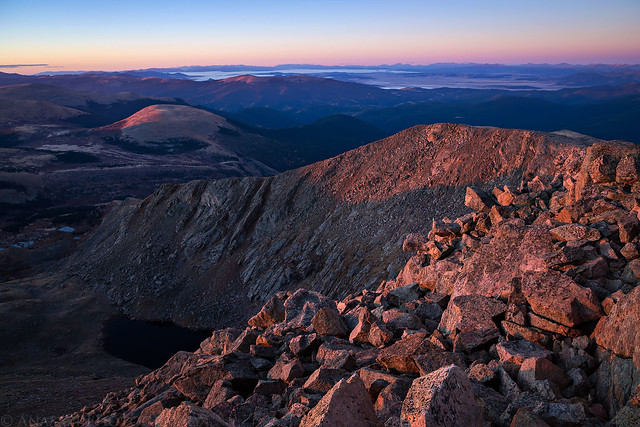 First light on Grays and Torreys. 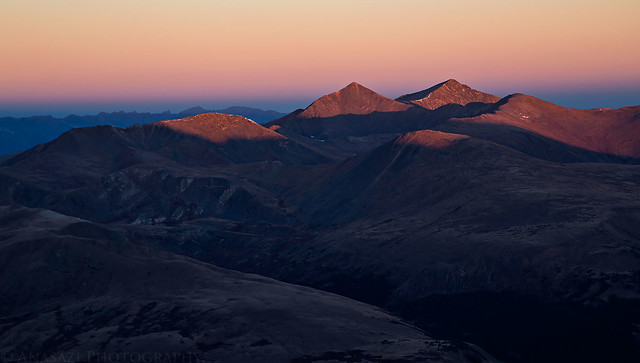 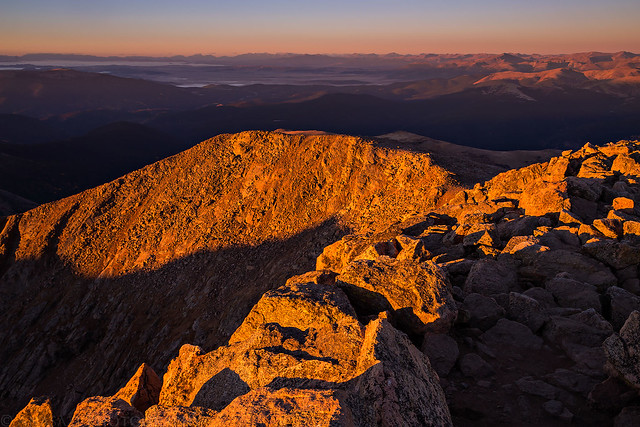 I had to take a photo of the benchmark on the summit. 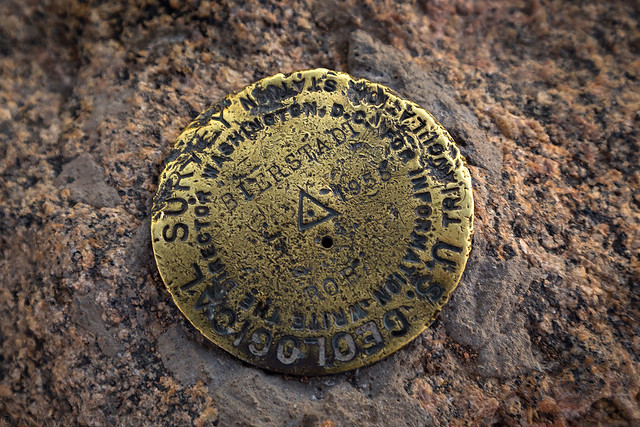 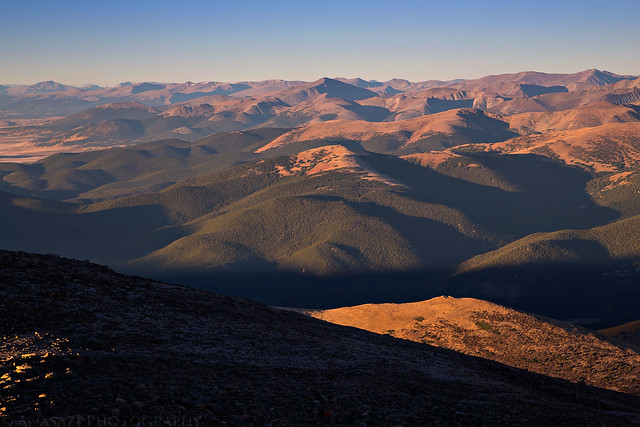 Hiking back down on the trail that cuts through the thick willows. 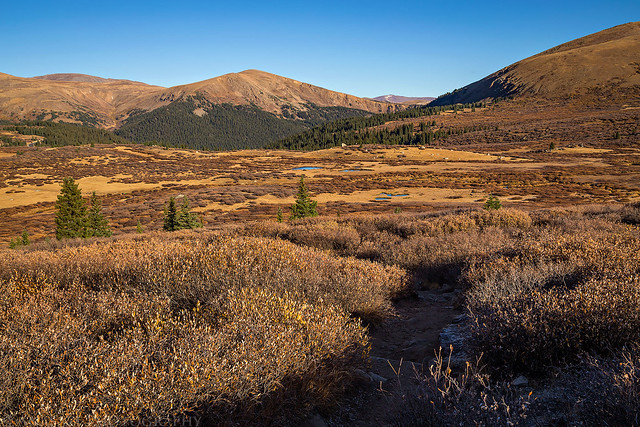 Crossing the boardwalk across the swampy area near Guanella Pass with Mount Spalding (13,842), The Sawtooth (13,780) and Mount Bierstadt under the sun. 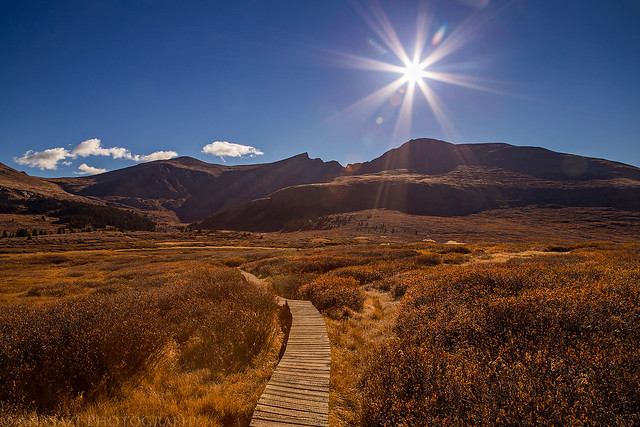 When I returned to my Jeep at the now-full parking lot (cars were lined up along the road in both directions), I finished driving over Guanella Pass and headed down the other side along Geneva Creek to Grant. When I reached the highway I turned right so I could make it to the San Juan Mountains for sunset. I quickly reached Kenosha Pass and was surprised at how packed this area was with people checking out the fall colors. I was glad that I had no plans to stick around this area and continued on to Buena Vista. At this point I debated whether to stick to the highway or to head over Cottonwood Pass. In the end I chose to go over Cottonwood Pass into Taylor Park since it’s going to be closed next year so they can pave the Gunnison side. I figured it would be nice to drive it one last time before they did that… 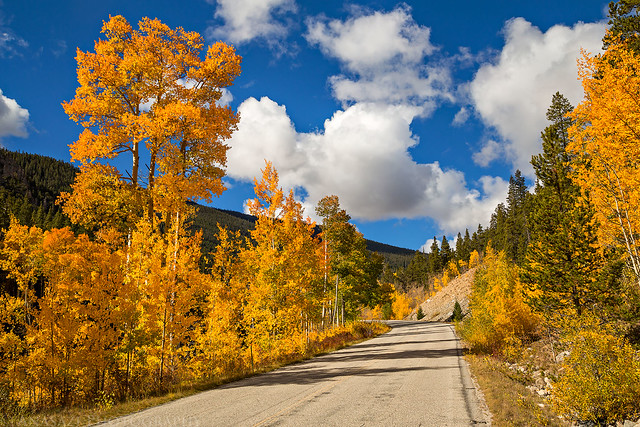 View from the pass over a small tarn towards Taylor Park. 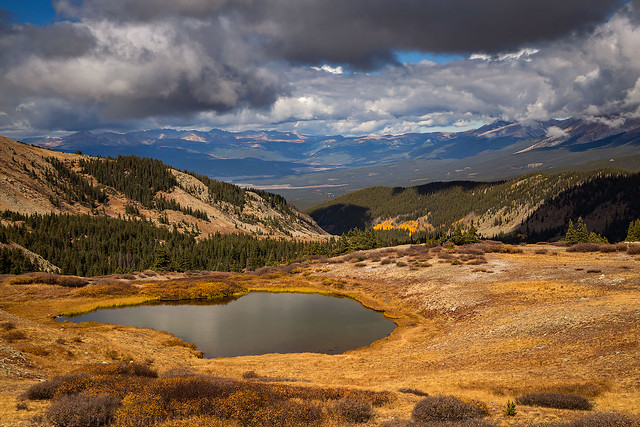 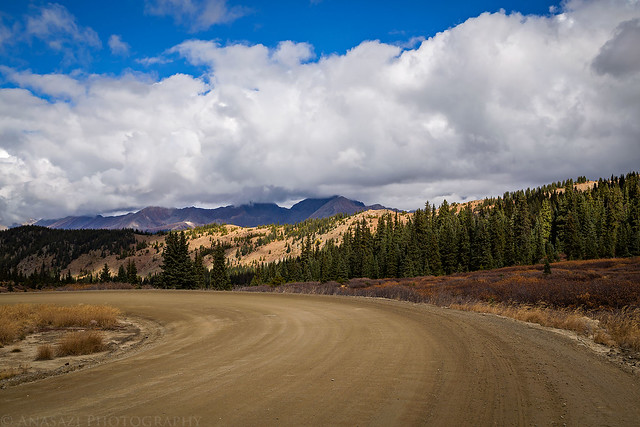 After following the road through Taylor Canyon I stopped in Gunnison for a late lunch before continuing on to The Cimarron’s for the evening. It was still too early for sunset, so I decided to check out the fall colors along the Little Cimarron Road and then I wanted to check out the road that climbed up onto High Mesa that I noticed a few weeks ago when we were in the area.

There were some nice colors along the Little Cimarron Road and High Mesa Road. 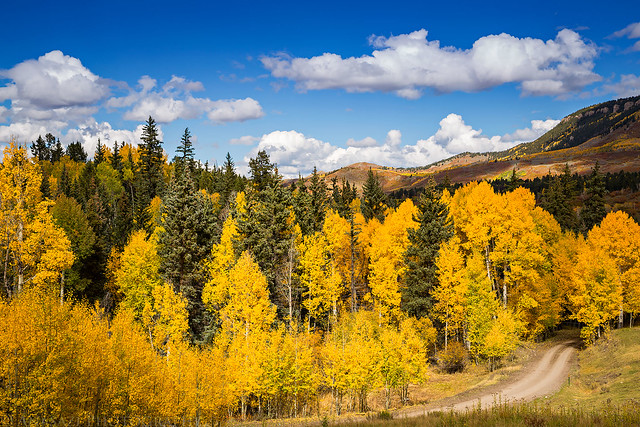 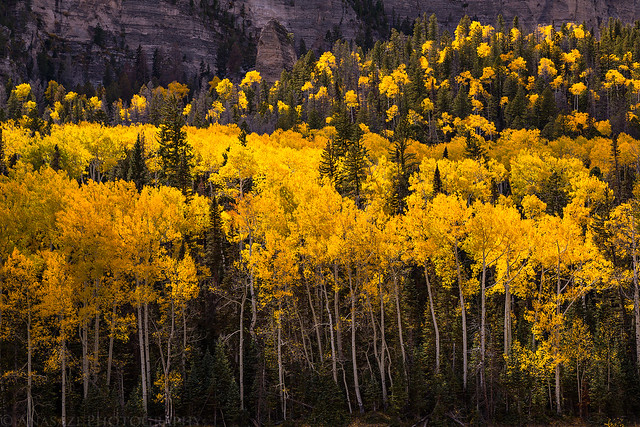 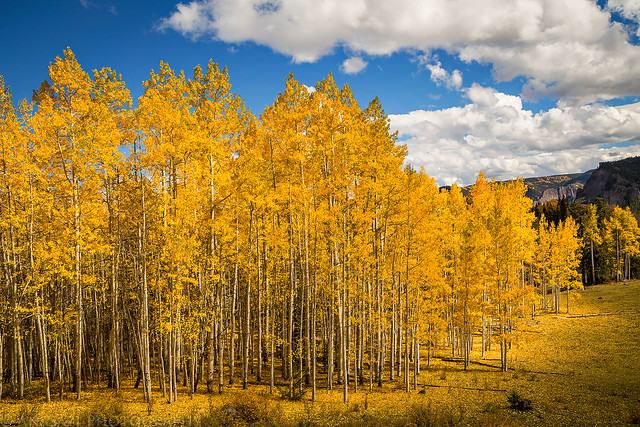 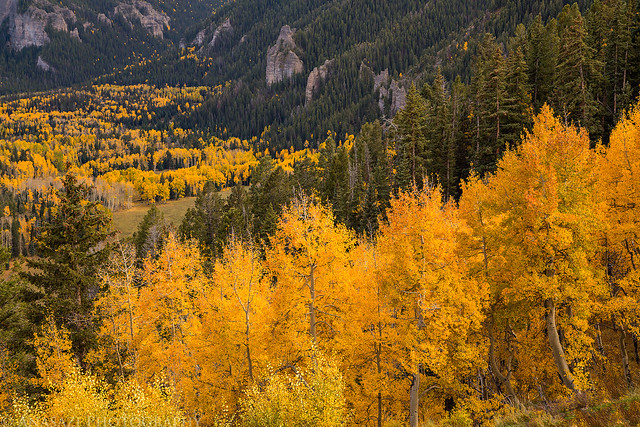 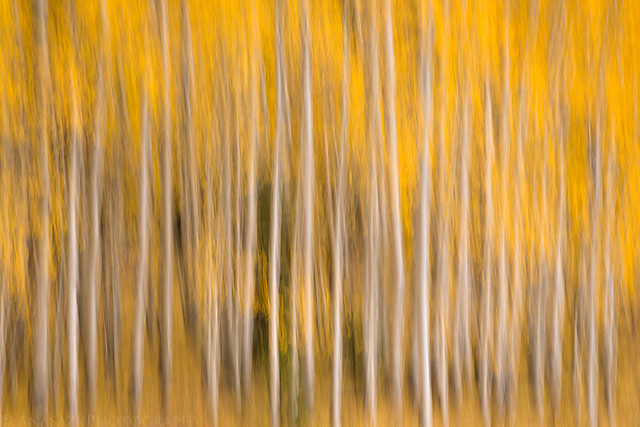 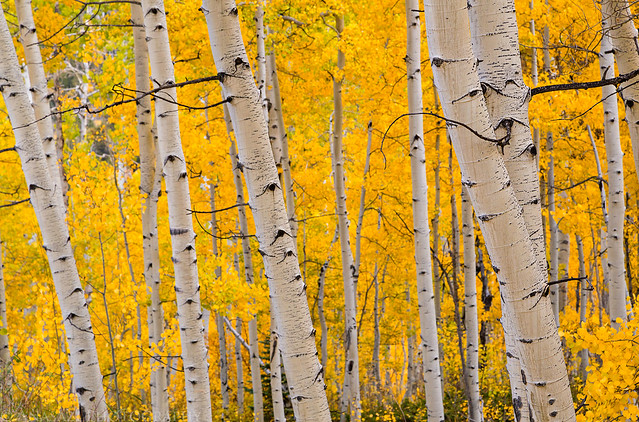 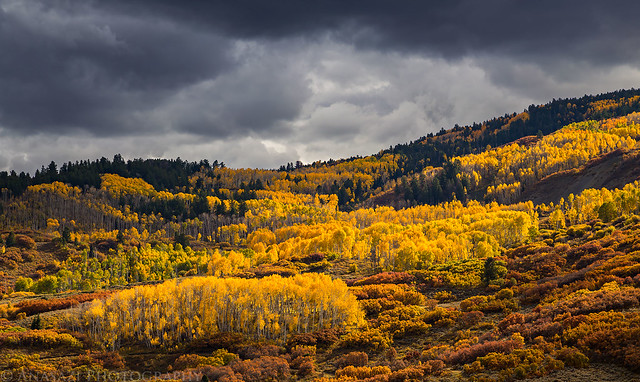 The colors along the road to Silver Jack Reservoir were pretty nice, too. 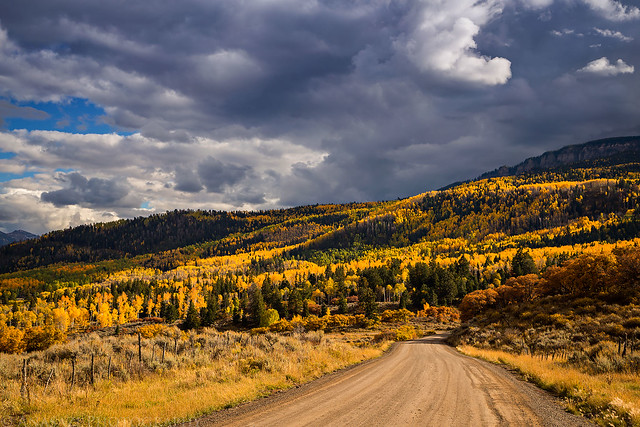 When it was getting a little closer to sunset I made my way over to Owl Creek Pass and started hiking to a nearby high point that would give me a nice view of Chimney Rock (11,781), Courthouse Mountain (12,152) and the rest of the peaks surrounding the West Fork of the Cimarron River. While I was in the area I ran into a couple of other photographers from around the country, including Jerry Dodrill from California.

My first view of Chimney Rock and Courthouse Mountain after climbing out of the trees. 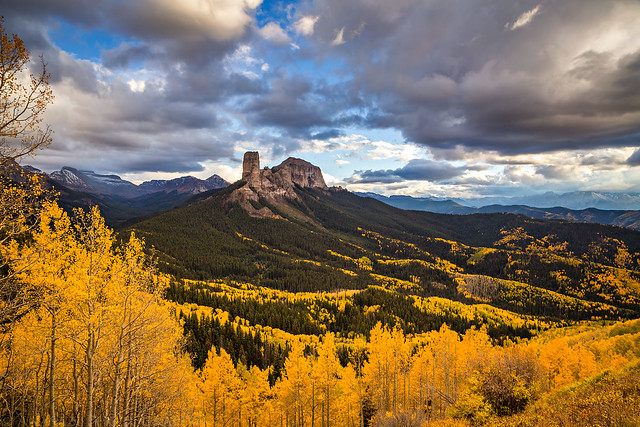 Shortly before sunset the sun dipped below the layer of clouds above with Mount Sneffels (14,150) and the rest of the Sneffels Range on the horizon. 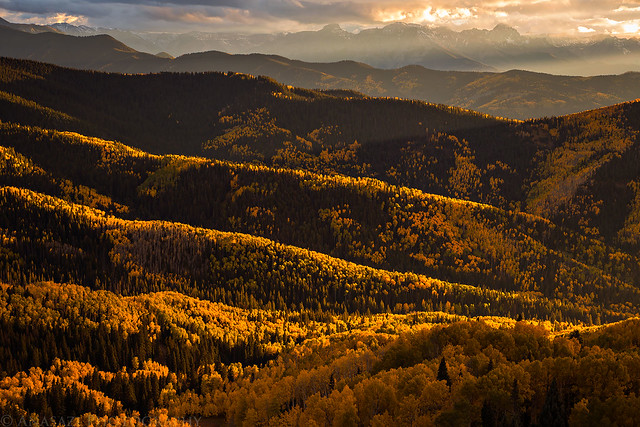 This turned out to be one of the best sunsets I’ve photographed in quite a while. 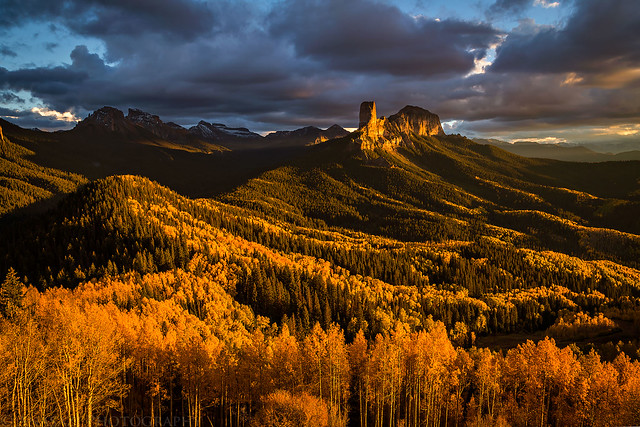 A closeup of Chimney Rock and Courthouse Mountain. 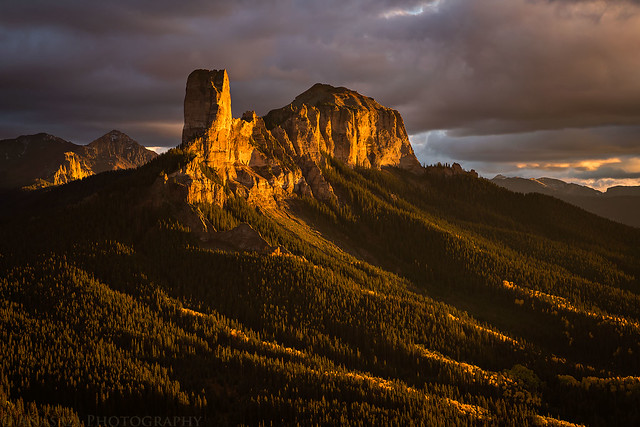 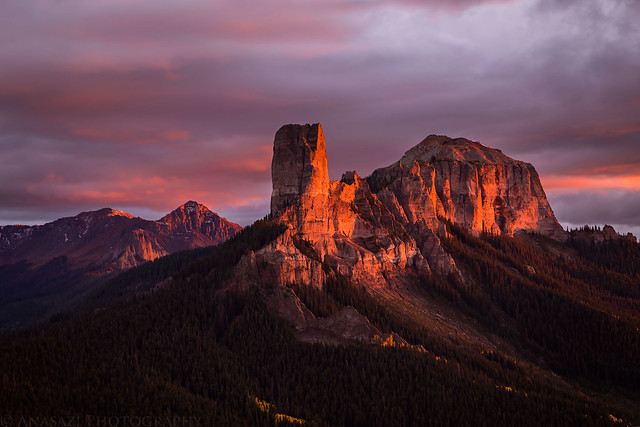 When the light was gone I headed back down to my Jeep at Owl Creek Pass and ended up giving a ride to a guy from Denver back to his vehicle who had parked about three miles away and climbed a much steeper route to the location we were at. Then I headed back over the pass to Vista Point and found a place to camp for the night. It had been a long day and I was pretty tired, so I went right to sleep again.