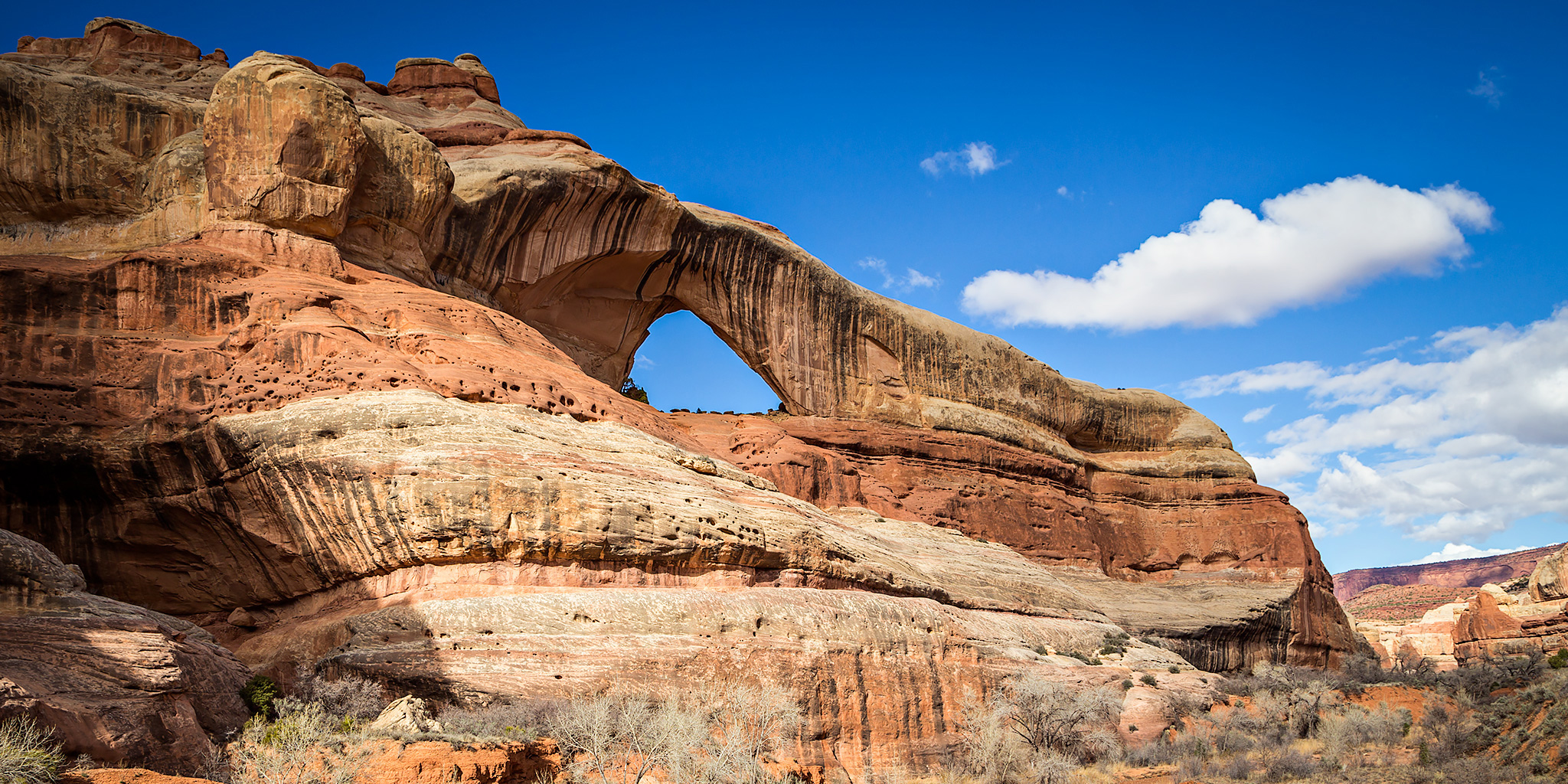 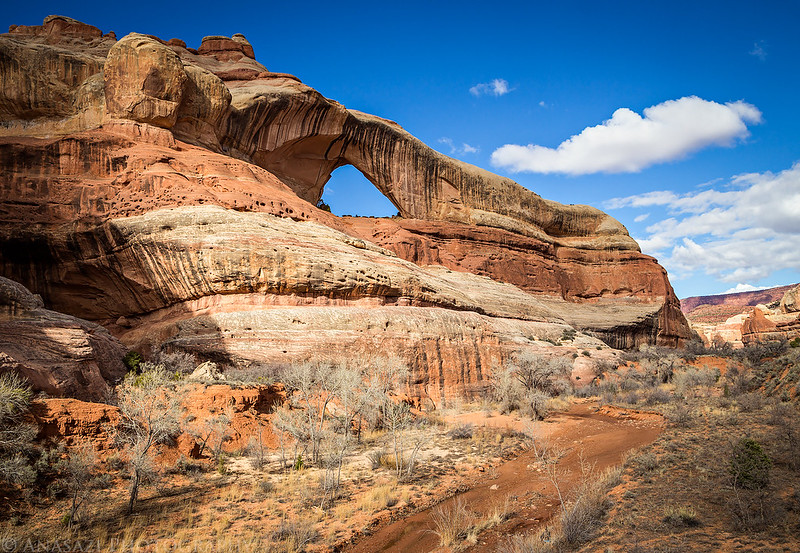 On Friday morning I obtained a vehicle day use pass online (I’m not a fan of the new system which requires you to obtain your pass online only 24 hours before your trip), but then I realized that Canyonlands listed the canyon as impassible due to spring runoff on their website. Considering the road status from the Park, I decided not to stop at the Visitor’s Center on Saturday to get the combination for the locked gate. I also didn’t really want to receive another lecture from a Ranger about how I shouldn’t be travelling alone since that speech gets old after hearing it a few times.

The weather forecast was calling for a clear day, so we were surprised to find stormy-looking clouds surrounding the Abajo Mountains as we dropped down into Indian Creek Canyon. 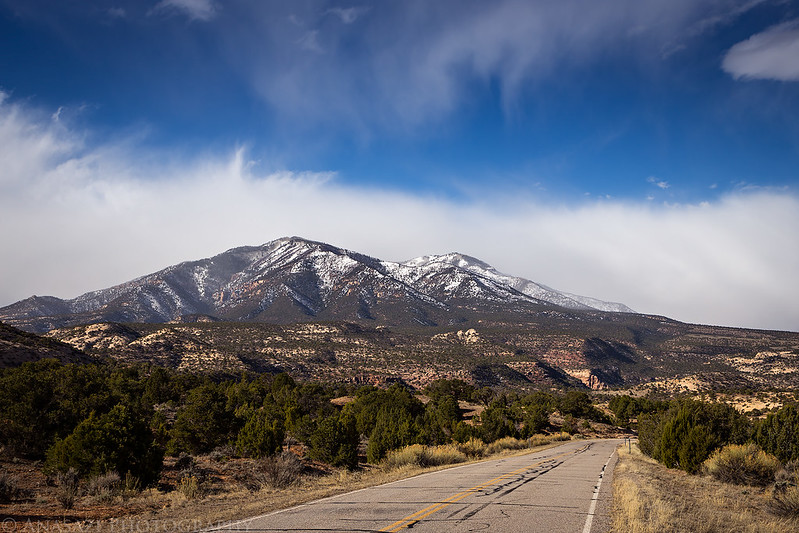 Leaving the highway on our way to Lavender Canyon. 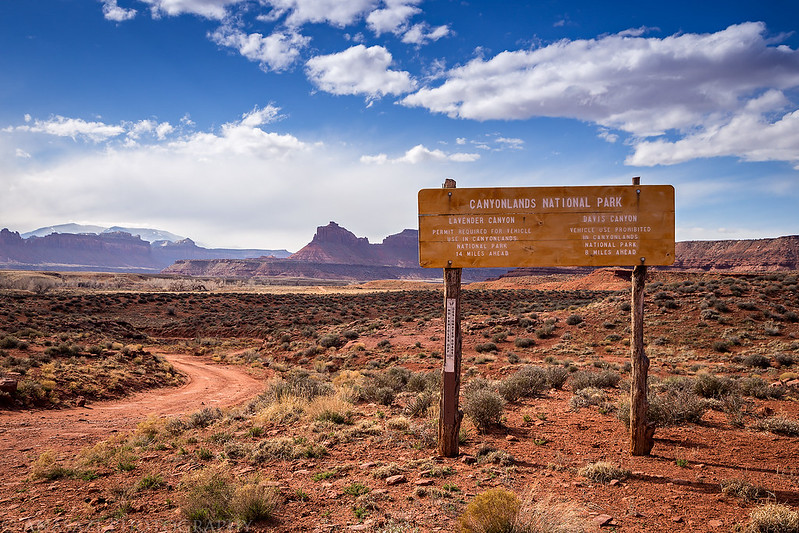 While the road through Davis Canyon seemed pretty well-traveled, as soon as we left Davis Canyon on our way over to Lavender Canyon we didn’t see any other recent tracks, especially in the wide wash of Lavender Creek. The wash alternated between wet and muddy and soft sand, but it was mostly easy and fast driving.

Our first campsite of the year, even though I grabbed the wrong tent that we usually use for car camping trips… 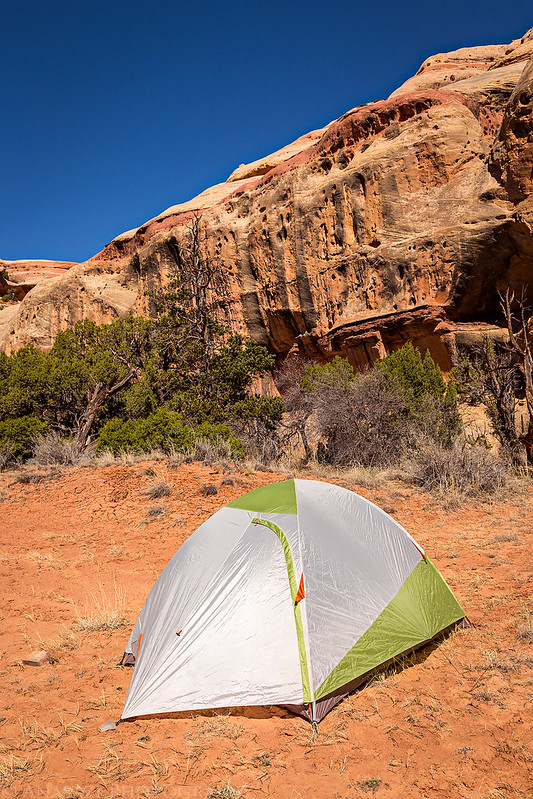 The ruins of a small granary near our camp. 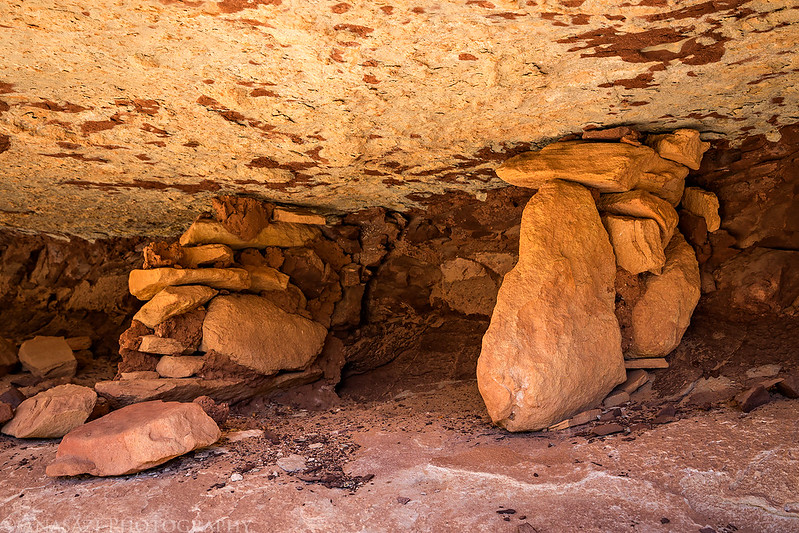 After getting camp setup, exploring the immediate area, and having lunch, we strapped on our backpacks and started hiking up Lavender Creek and entered Canyonlands National Park. We passed plenty of arches along the way and then I spotted a nice little granary up in a good-sized alcove, so we climbed up to check it out.

This is the nice granary that caught my attention from below. 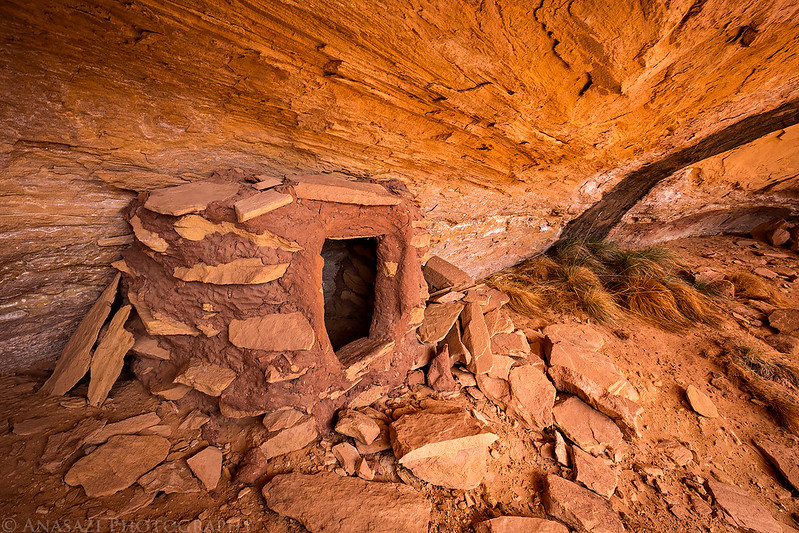 A rougher ruin located in the same alcove. 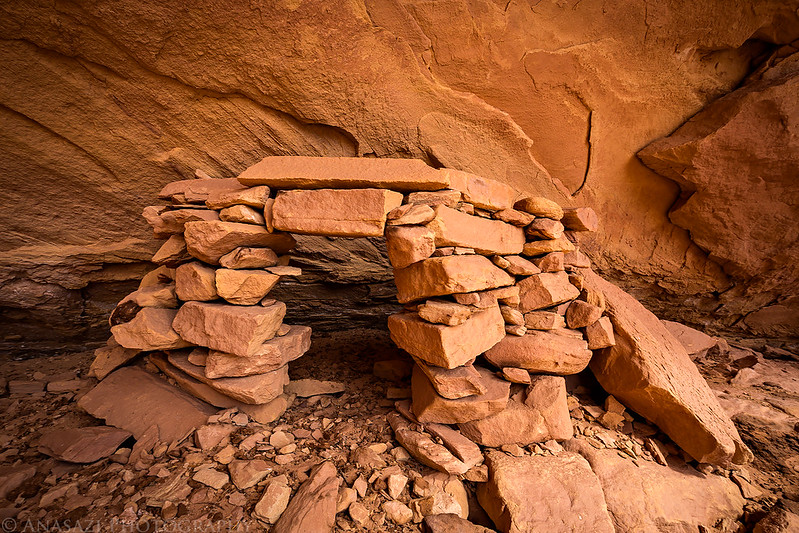 The texture and color of sandstone. 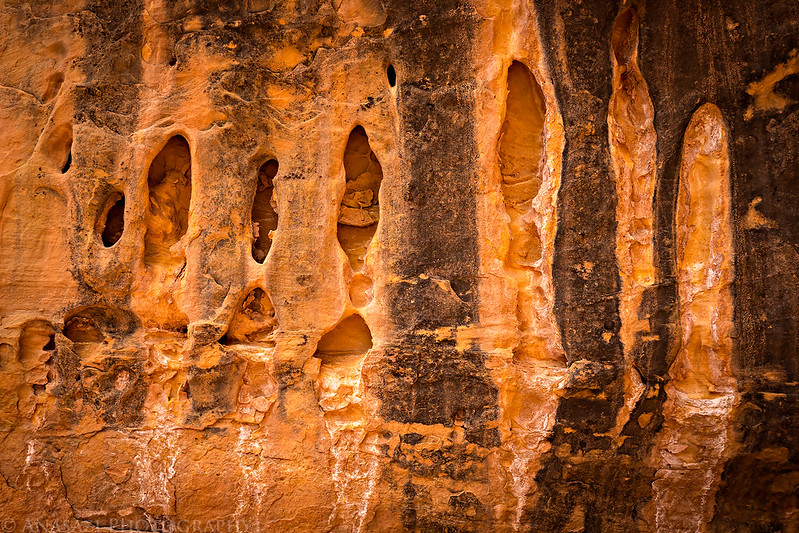 There was plenty of water to be found throughout Lavender Canyon, though much of it was fouled up by renegade cows that had found their way past the boundary of the park. Probably through a break in the fencing somewhere. We bumped into a group of three cows further up the canyon. 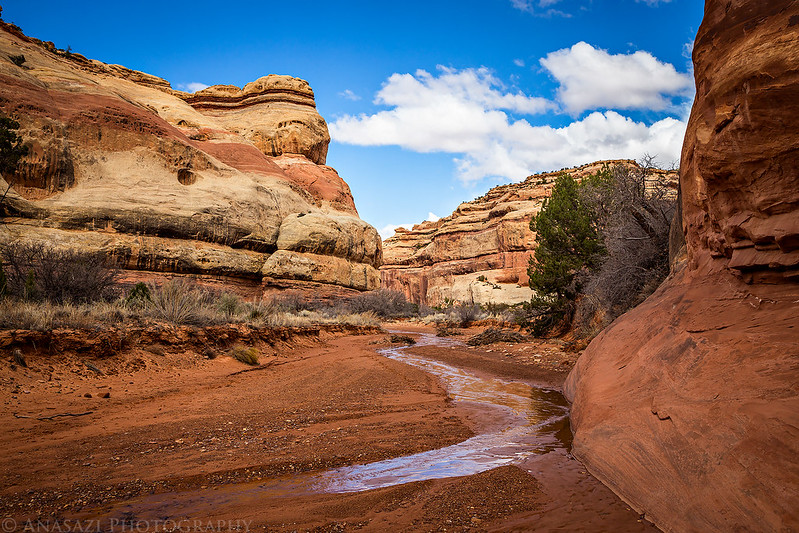 Another nice ruin that I was able to get close, but not all the way up to. There were a few old moki steps up the final ledge that were a little too tricky for me. 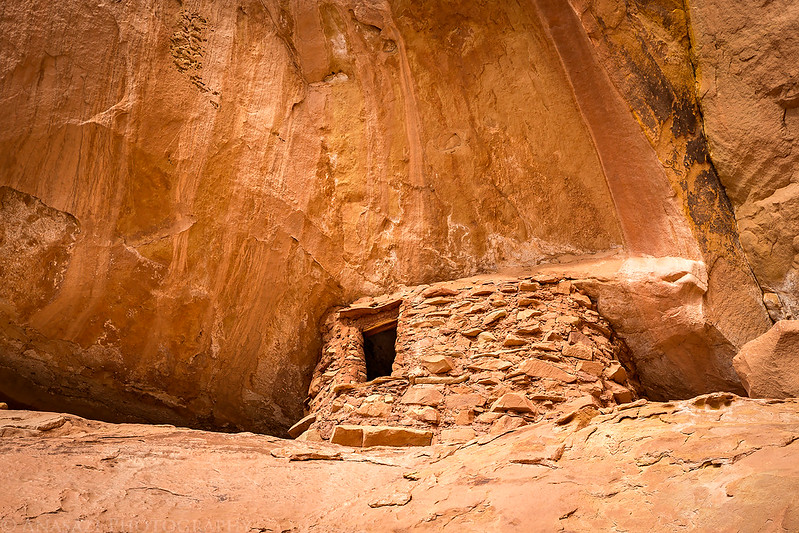 Our turnaround point for the day was at the impressive Cleft Arch. 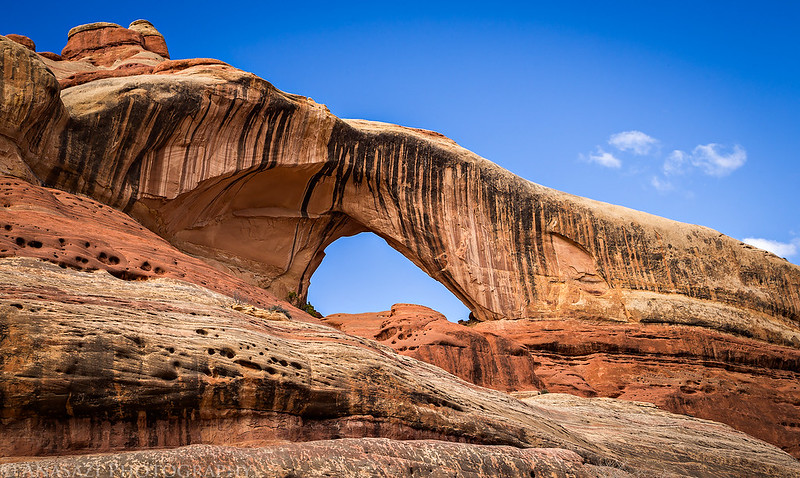 Diane was the first to spot Teapot Arch high above. 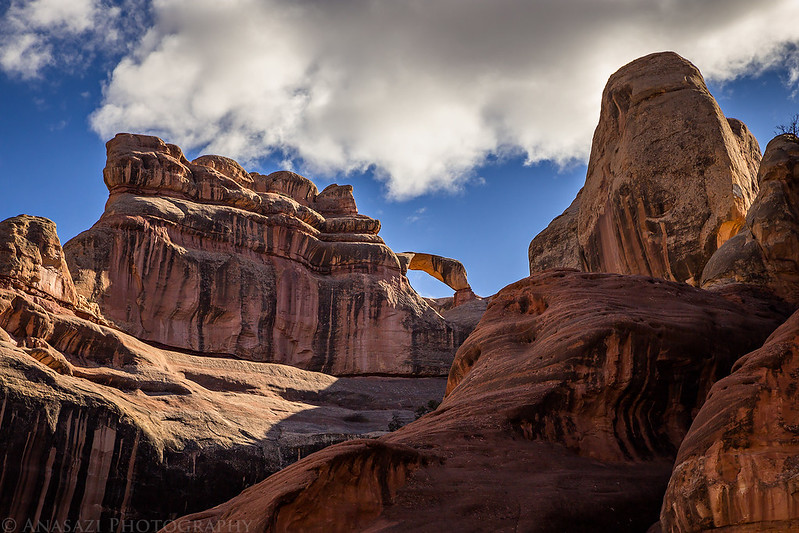 This ruin looked amazingly preserved, but we were unable to find a way to get up to it. 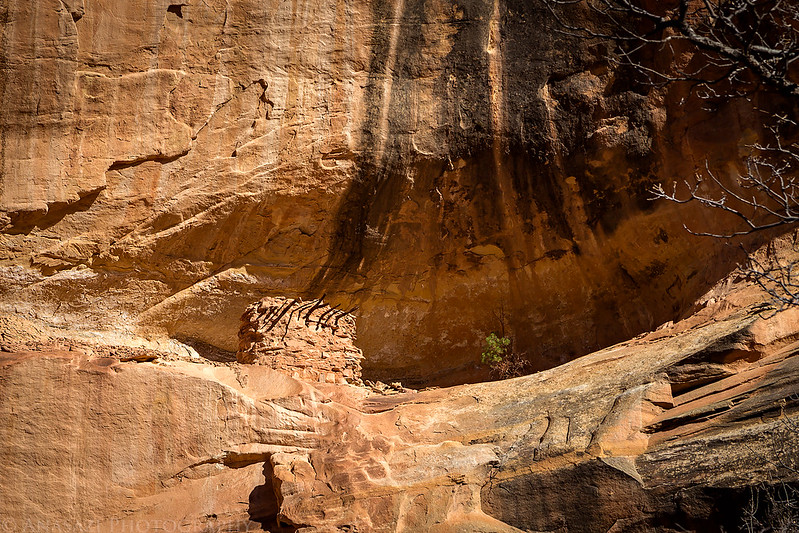 Following the wide sandy wash back to camp. It’s obvious than no vehicles have driven here for a while. Probably not since last year? I’m actually glad I didn’t get the combination to the gate and that we hiked in instead. 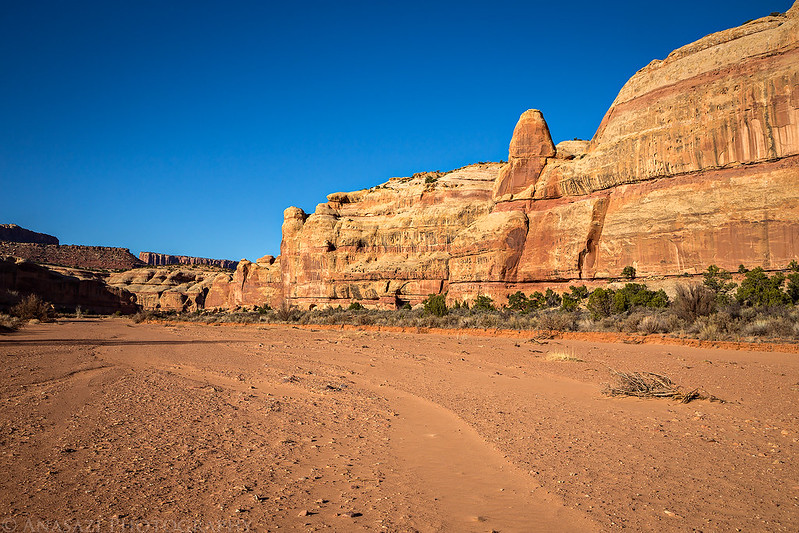 Here’s a view of Campsite Arch shortly before sunset. We were camped below it. 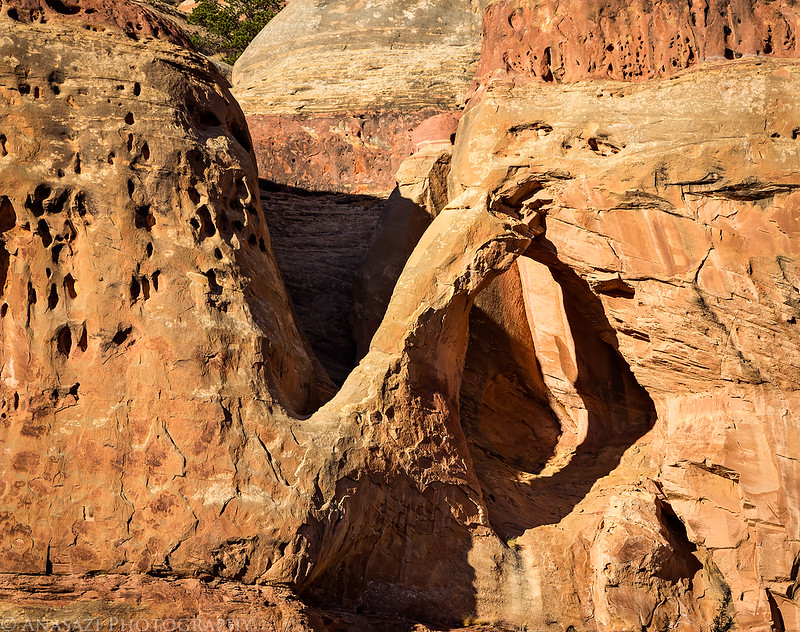 I liked the light and shadows on Drumstick Arch near the end of the day, too. 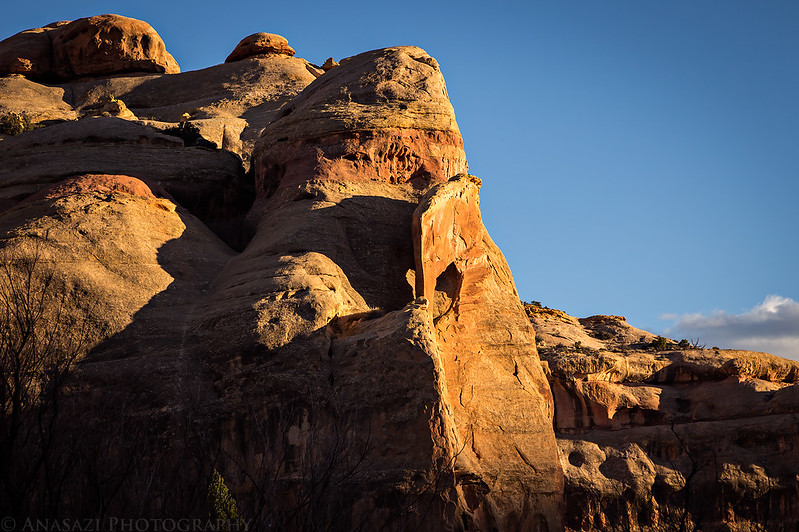 On Sunday morning we slept in late until the sun came up which really helped us adjust to the new Daylight Savings Time that went into effect overnight. Then we packed up camp and drove up the nearby Dry Fork Canyon to visit a few more arches.

Here’s another small ruin and reverse handprint that was near our camp that I photographed on Sunday morning before starting to load up the Jeep. 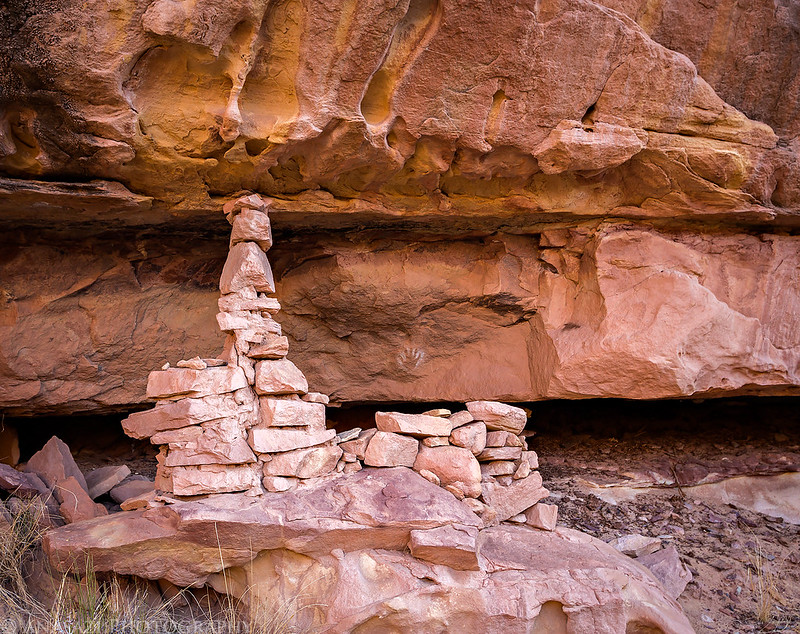 Beam Arch near the mouth of Dry Fork Canyon. 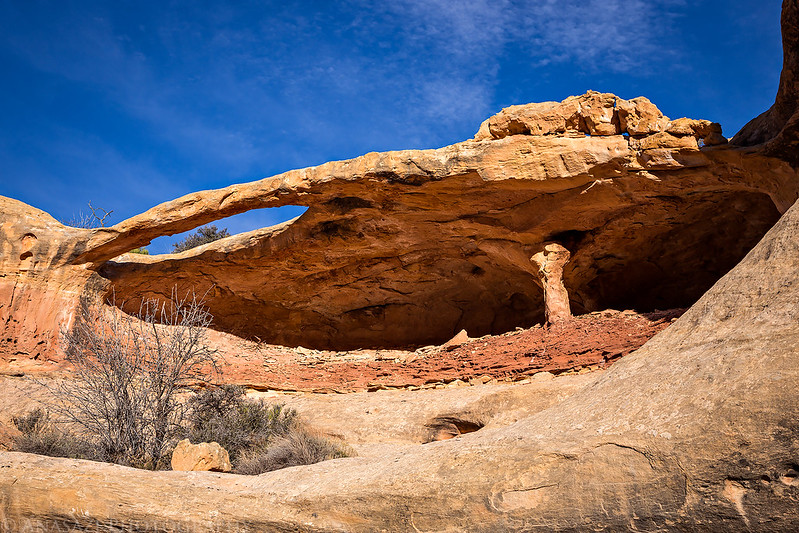 My Jeep on the road in Dry Fork Canyon. It was obvious that no one had driven in this canyon for a while because there were a few rough washed-out sections near the beginning. 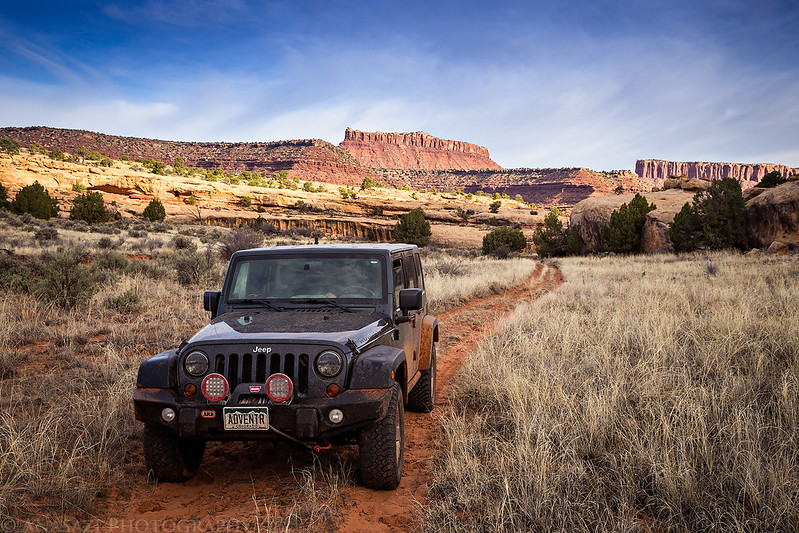 Before heading back to Moab for a late lunch at Pasta Jay’s and then home, we stopped to visit the awesome petroglyphs of Shay Canyon. I’ve been to these a few times before but this was Diane’s first time here. She was able to spot a few high petroglyphs I had missed before. It’s a really nice site to visit. 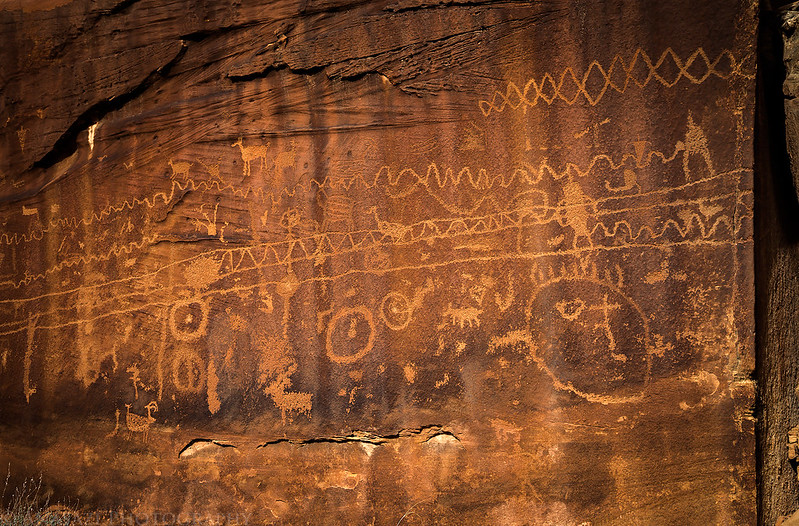 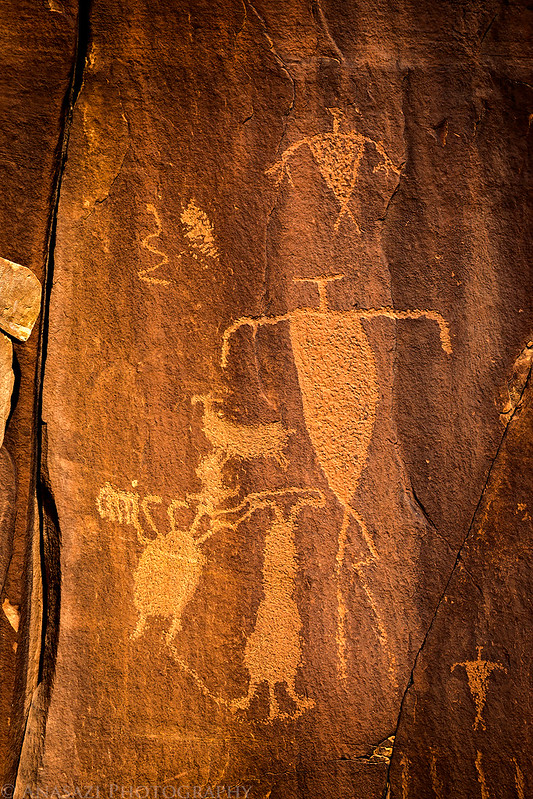 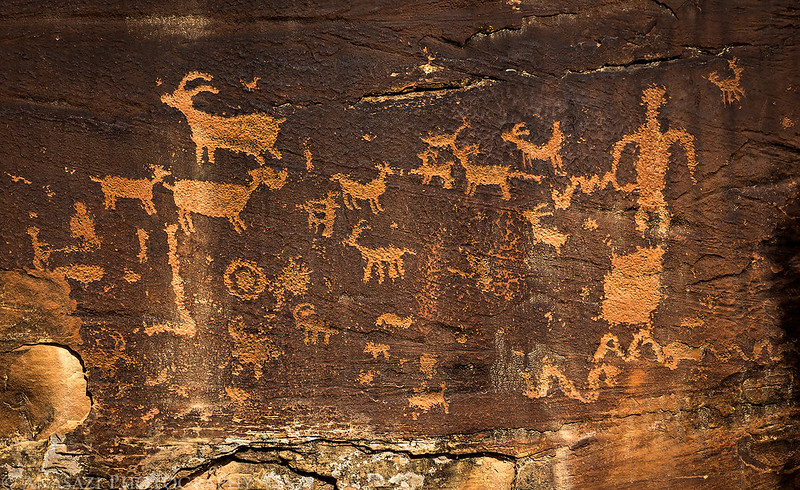 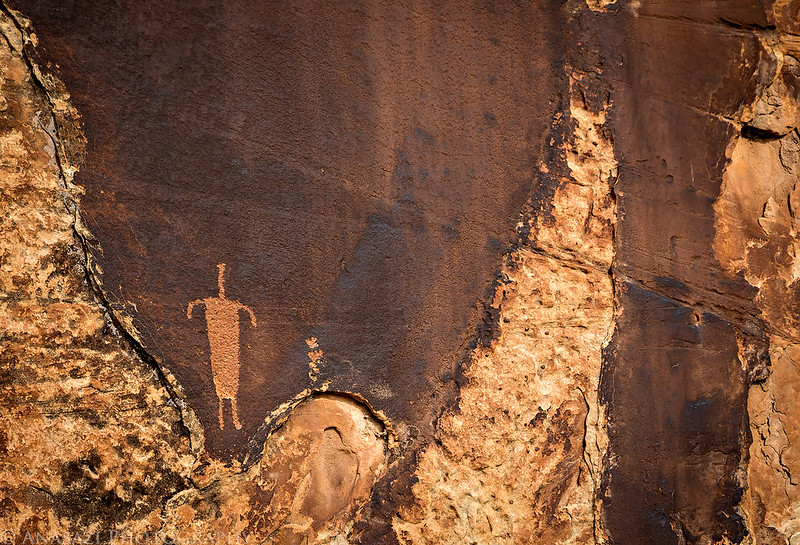 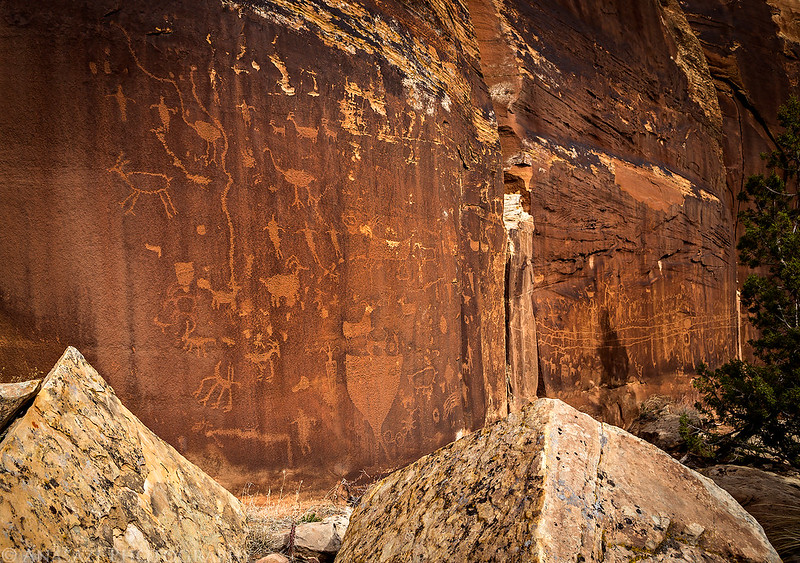 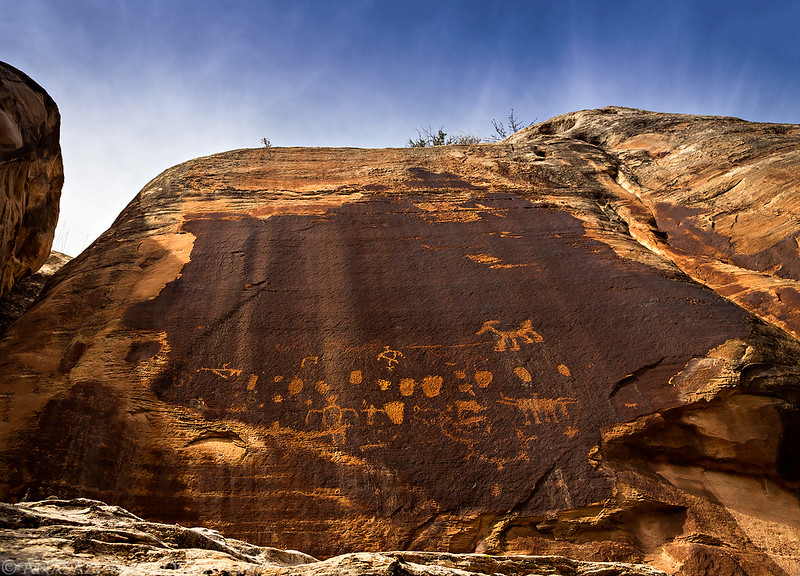 I pulled over along the highway during the drive back to Moab for one last photo of the La Sal Mountains over the Cameo Cliffs.