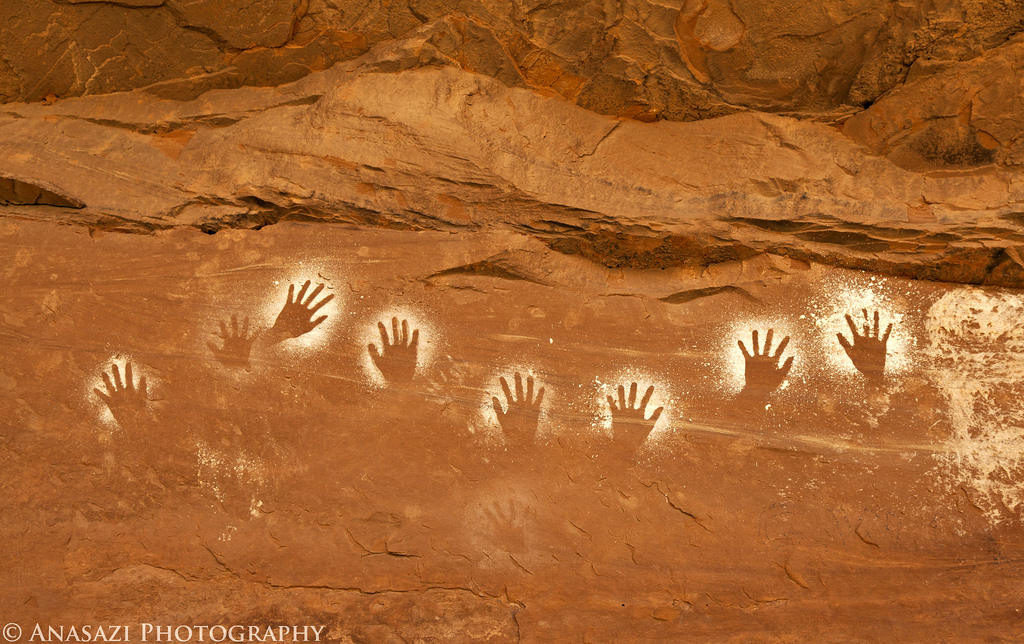 Amanda and I have a little tradition of heading down to Comb Ridge and Cedar Mesa for the Memorial Day weekend. In the past she has had no trouble getting the weekend off from work, but unfortunately she was unable to get it off again this year. I had invited a friend or two to join me, but neither of them were able to make it down this weekend. That meant I would be heading down by myself.

After driving down through Moab, Monticello and Blanding , I setup my camp in Comb Wash and got ready to start my first hike into Lower Fish Creek Canyon.

After finding my way into the canyon from the new trailhead (the BLM has closed a few roads in the area recently), I soon stopped at the first set of ruins I came across. There are a few faint reverse handprints on the ceiling above the ruin. 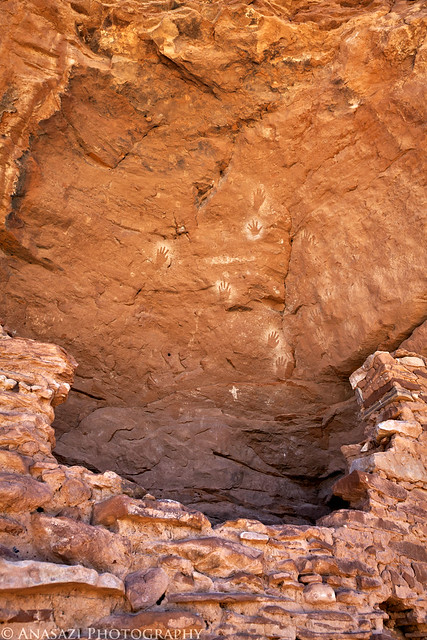 A closer look at the first set of ruins. 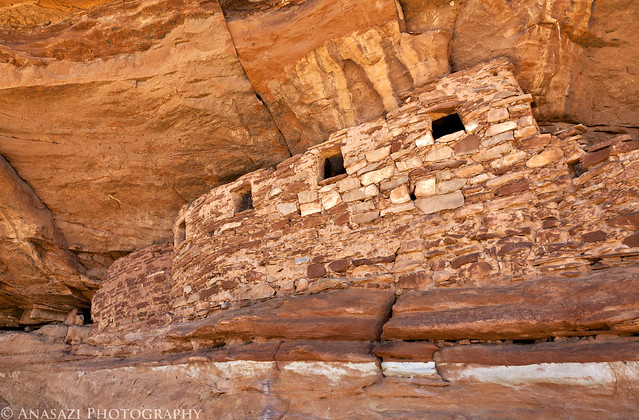 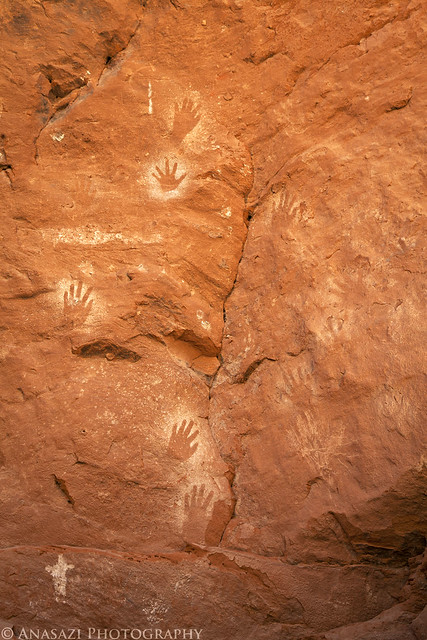 After hiking just a little further up-canyon I came across the set of ruins I was most looking forward to visiting on this hike. 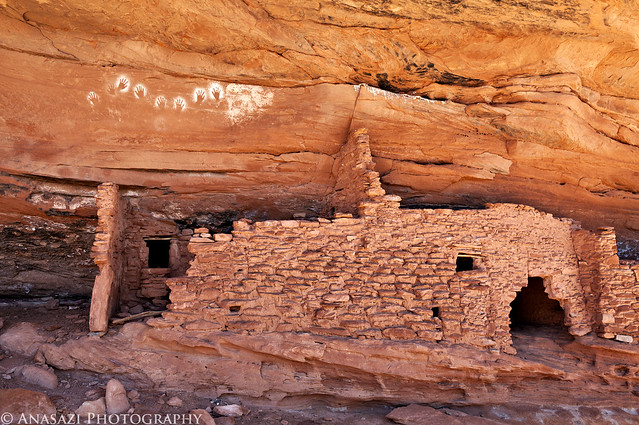 Here’s a close look that the very well-preserved reverse handprints above the ruin. Very cool! 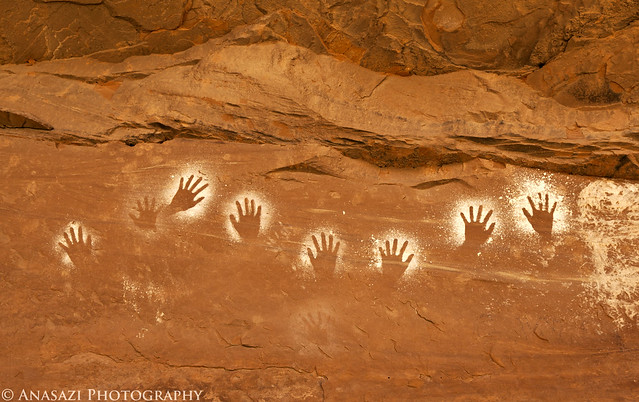 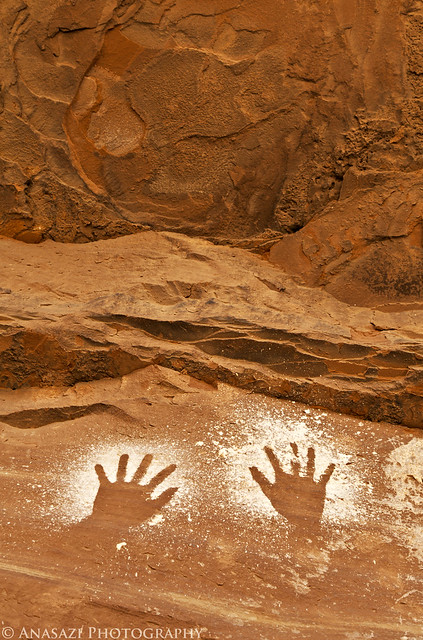 I normally don’t take photos of potsherds anymore, unless they are very unique, but something about this pile interested me enough to stop and take a photo… 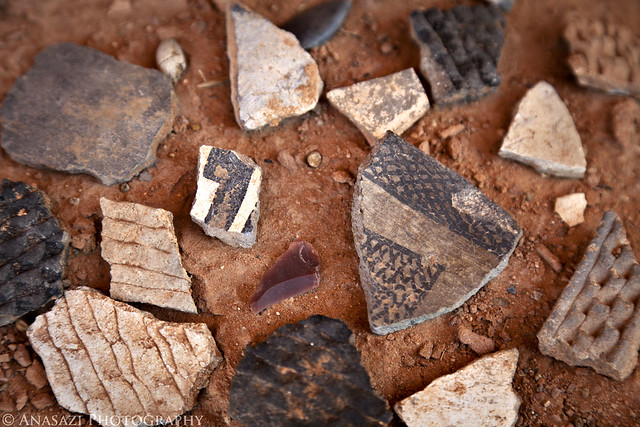 Here’s a snake pictograph with what appears to be a square head, or maybe just a square in front of the snake… 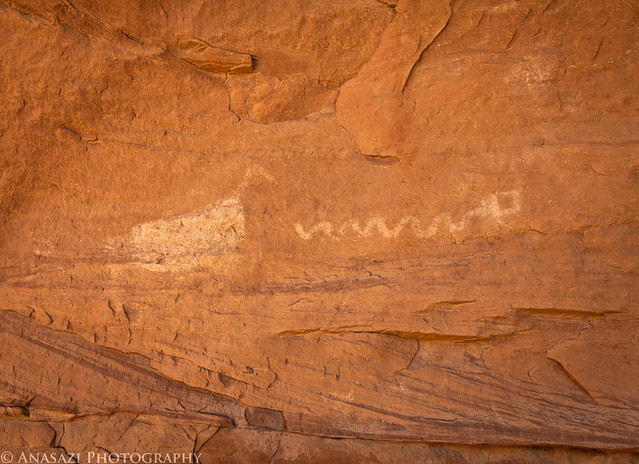 Still further up the canyon I found a small granary hidden in an alcove a little above the canyon. Not much left but this wall with the opening. 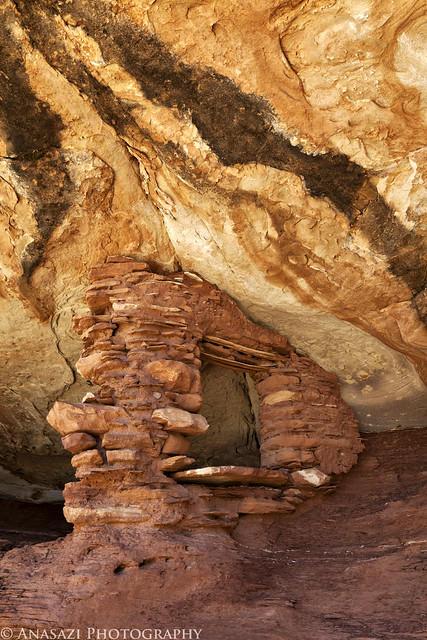 This is the last structure I found in the canyon before turning around and heading back to my Jeep. I almost missed it because it blended into it’s surroundings quite well. 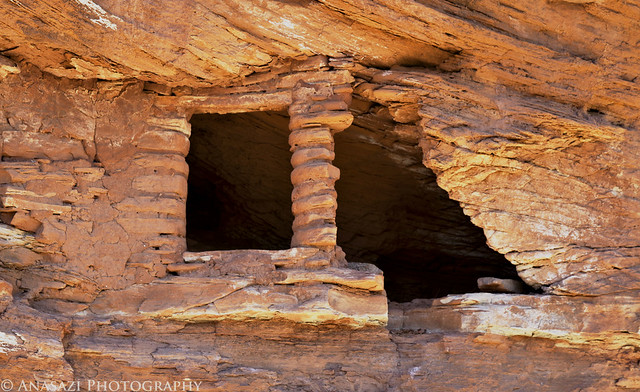 On my way back, I decided to climb up to what looked like a small ruin behind a large boulder. When I finally figured out the way up, I reached the small ruin which was basically just the remnants of a wall…not much was left. As I was searching the area I found this broken petroglyph that was hard to see in the direct sunlight. I’ll mention now that I forgot my circular polarizer in the Jeep on this hike and didn’t realize it until I was a few miles away…which is why this photo sucks. I can’t believe I did that! 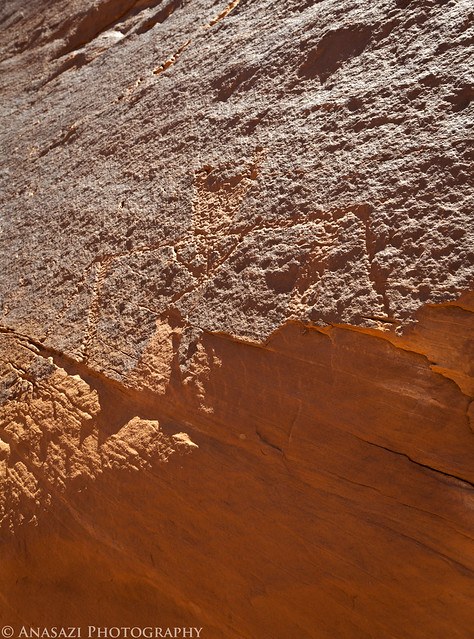 While I was in the canyon, it had become much warmer out than when I started hiking and the wind had picked up quite a bit, too. My Jeep said it was 95 degree out when I got back to it. I still had plenty of time to do some more exploring, so I stopped at a few petroglyph sites nearby.

A large boulder with a bunch of petroglyphs on it near the base of Comb Ridge. 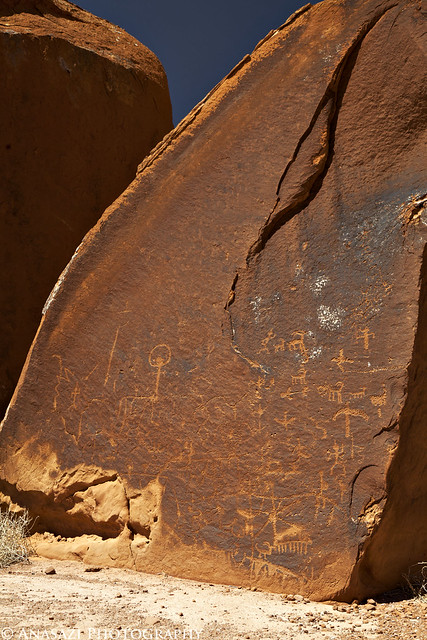 Another panel of petroglyphs inside a stack of boulders that I’ve seen referred to as the ‘Curly Panel’ thanks to someone named Curly carving their name into the boulder. 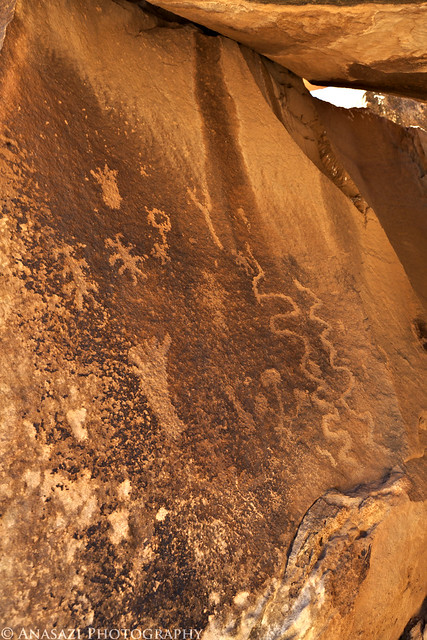 On my way to the other side of the Comb I stopped to check out the Big Feet Panel. 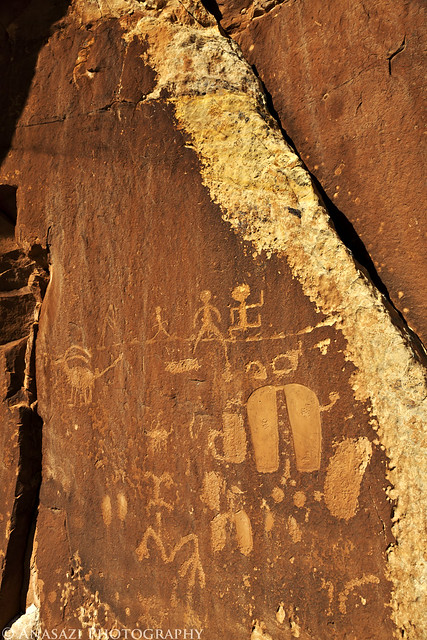 I was a bit hungry at this time and decided that I wanted to head into town for something to eat. After grabbing a sandwich from Subway in Blanding and calling Amanda, I started on my way back towards Comb Ridge. I ended up taking a little detour and revisiting the Tower House Ruin before the sun set for the evening. 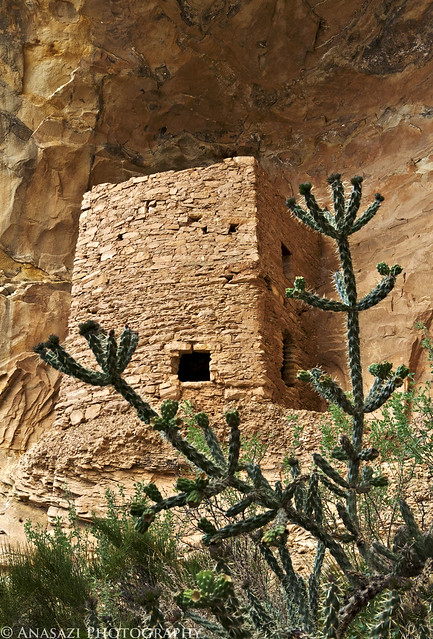 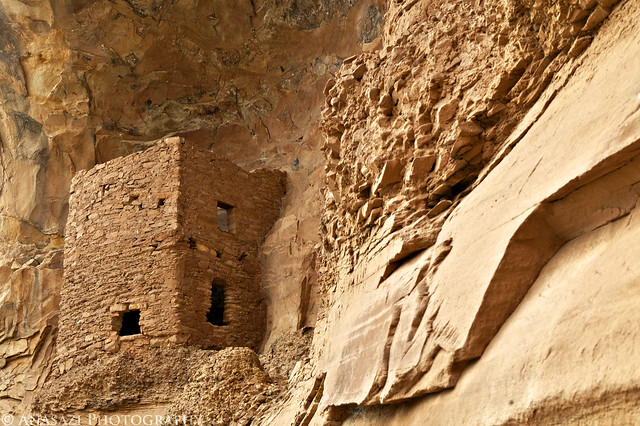 I ended up finding a few petroglyphs that I didn’t notice on my last visit here a few years ago, including this anthropomorph that looks like there might be something on it’s shoulder… 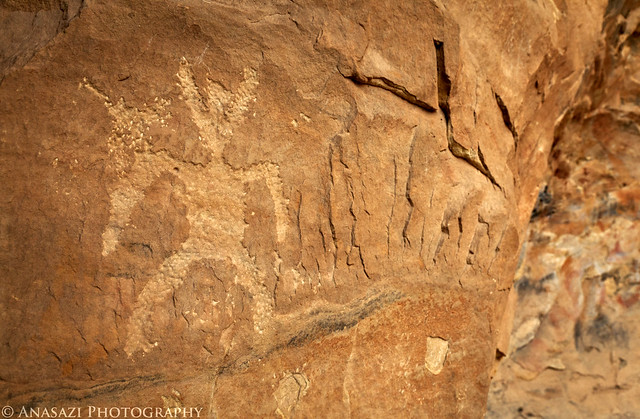 A long snake-like figure and an anthropomorph that has three fingers on each hand. 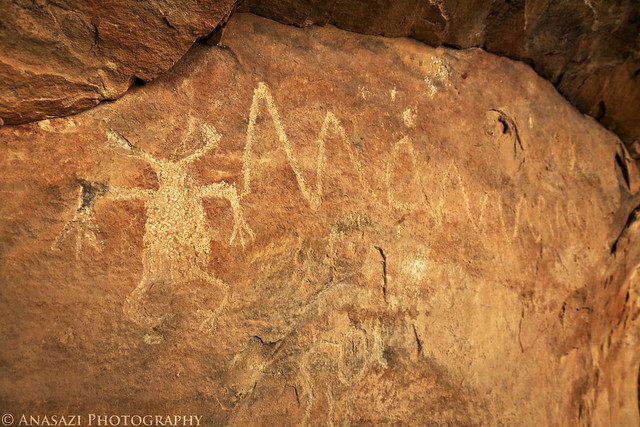 Long Snake and Three Fingers by IntrepidXJ, on Flickr

After climbing out of the little canyon from the Tower House Ruin the sun was just about ready to disappear. I took this photo looking back down over Butler Wash from the top. 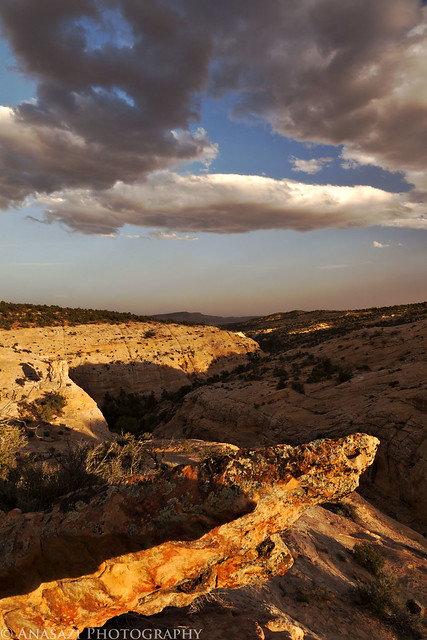 After driving through the road-cut through Comb Ridge, I pulled over and took this shot of the highway snaking it’s way up onto Cedar Mesa across Comb Wash. The wind had really picked up while I was visiting Tower House and had picked up quite a bit of dust, too. 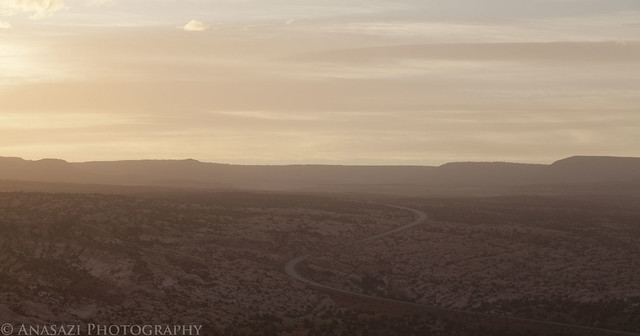 I soon reached camp again and was ready to get some sleep so I could continue exploring the area on Sunday. The wind would blow pretty hard most of the night…