The Arches of Mee Canyon

Before I get started, I just wanted to note that this Trip Report marks an important milestone in the history of ADVENTR.co. This is the 1,000th Trip Report that I have posted to this blog! As much as I would have loved to have gone somewhere further from home for this special occasion, it is what it is, and with the current restrictions in place for the COVID-19 pandemic, we had to stay close to home this time. When this year began, I had no idea I’d end up spending so much time exploring these areas closer to home, and I have really been enjoying getting to know the Black Ridge Canyons Wilderness area a little better these past few weeks!

It’s been just about a month since our last backpacking trip into Lower Muley Twist Canyon, and I was ready to get out for another one. We try to get out on at least one backpacking trip each month, minus winter, and we didn’t want to let April get away from us, so we kept it close to home and went on an easier overnight trip into the Black Ridge Canyons Wilderness area. This weekend we went in search of half a dozen or so arches that are located on a bench above Mee Canyon, similar to the location of the more popular Rattlesnake Canyon Arches that are found nearby.

We left home late on Saturday morning and followed the Upper Black Ridge Road to the same trailhead I had just used to hike to the Pollock Windows on Thursday evening. I was expecting the area to be busy on a weekend, but I was still surprised at how many vehicles and occupied campsites we passed along the way. It was certainly the busiest I have ever seen this area! Since this was going to be a pretty easy overnighter and we weren’t expecting to find any water along the route, we carried all the water we would need and left the water filter and stove behind to help keep the weight of our packs down. From the trailhead we followed an old closed road into the wilderness and then left it to hike cross-country to the edge of the mesa where we scrambled down a steep and loose slope to the bench above Mee Canyon. Although the temperature out was in the low 60’s, the sky was clear and the sun was blazing which made it feel much warmer. There was an occasion breeze to help cool us off and sitting in the shade felt really nice.

Right after descending to the bench above Mee Canyon we were greeted by Two Feathers Arch. There is actually a second opening to the right that you cannot see from this angle. 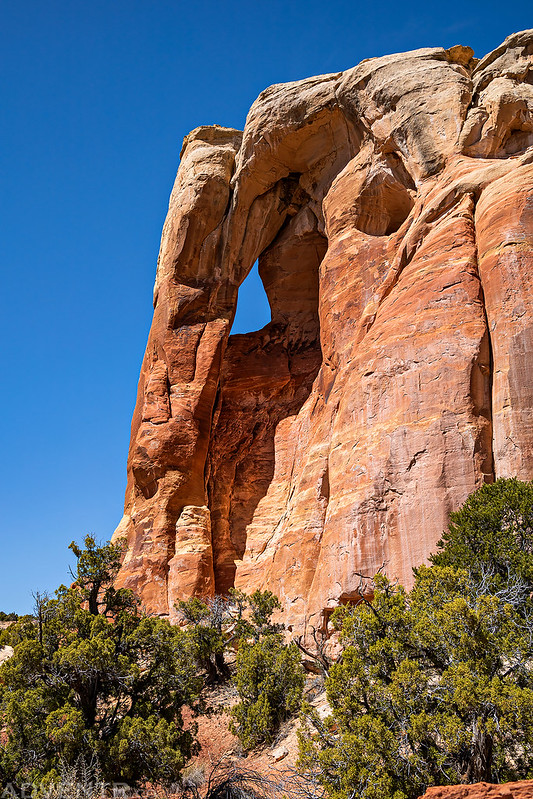 To the right of Two Feathers Arch was the much smaller Porthole Arch. 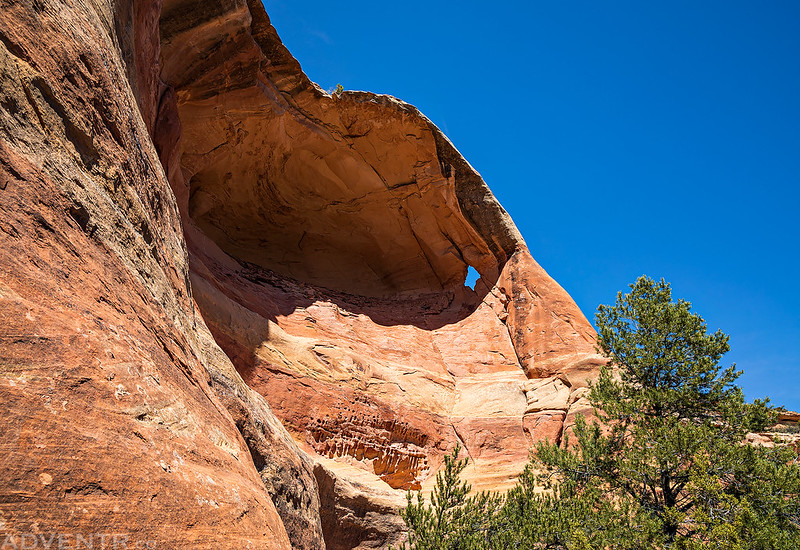 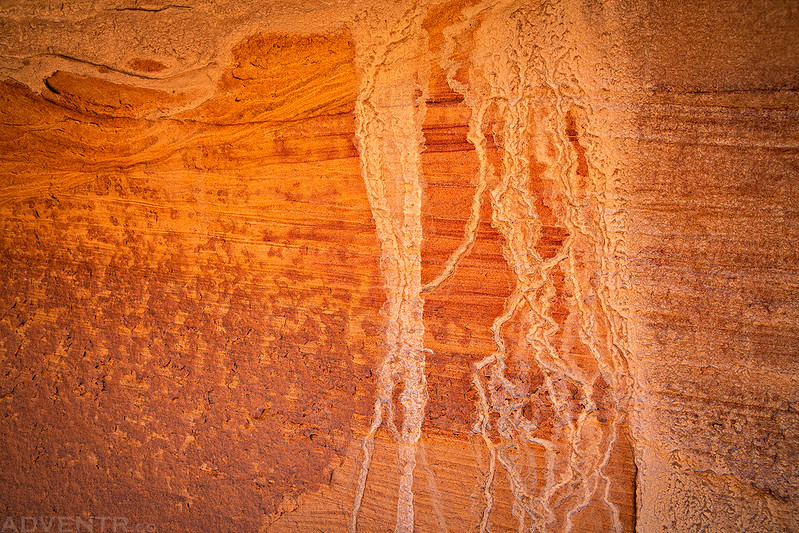 Crown Double Arch was a highlight of the day and Diane’s favorite arch that we visited this weekend. 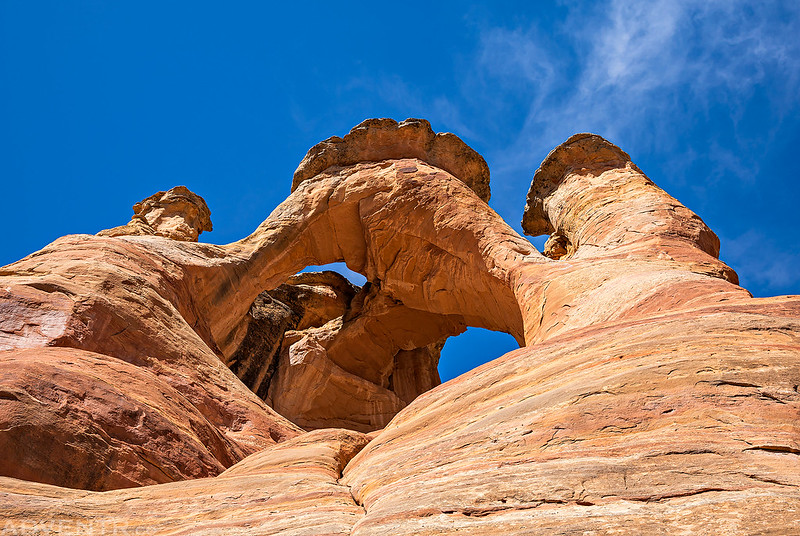 Tublok Arch was also found nearby. 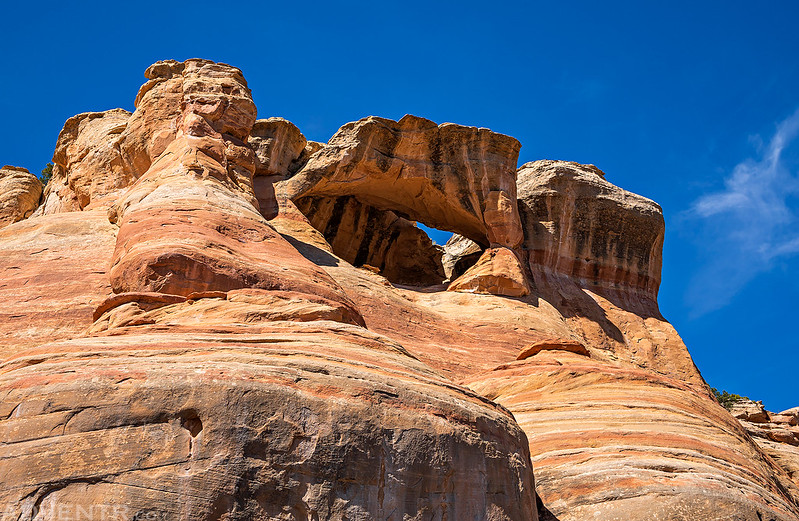 Route-finding along the bench as we made our way over to Will Minor Arch. 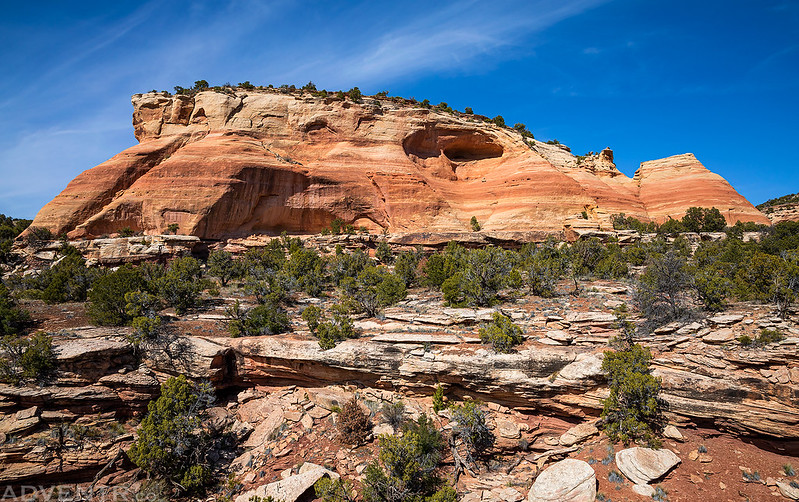 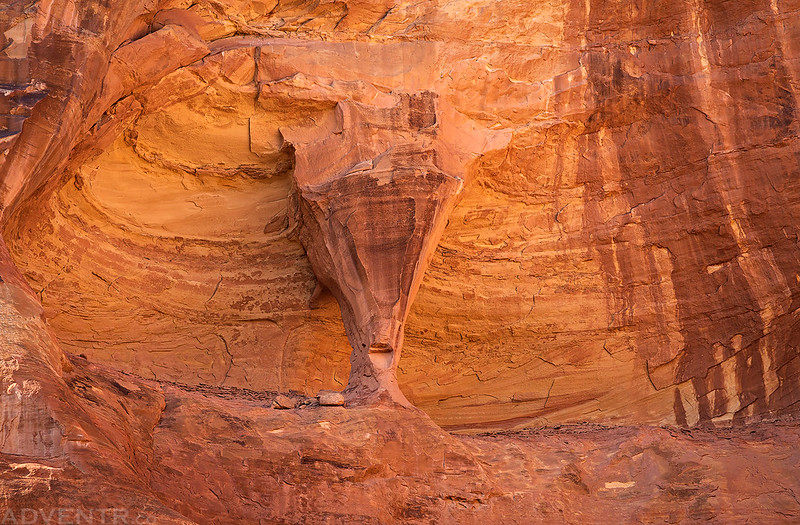 We walked over to an overlook of Mee Canyon that I had scouted on Google Earth since it looked like a a great spot that we could see straight down the lower part of the canyon. 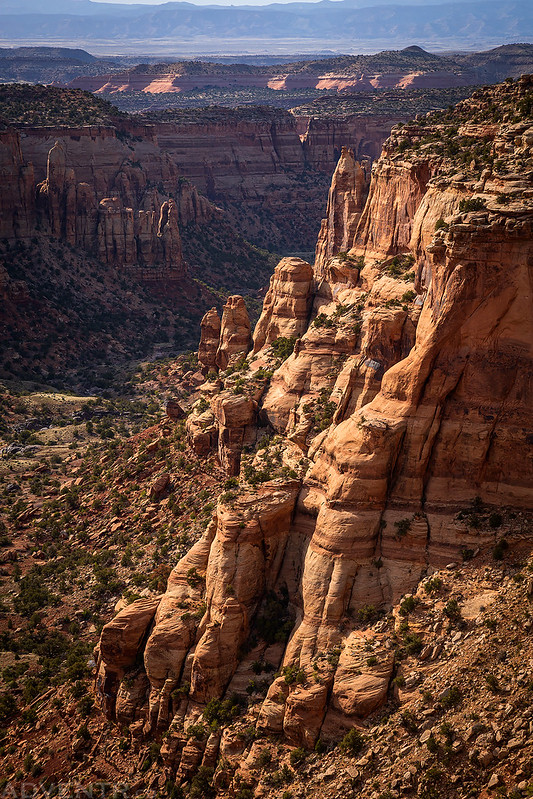 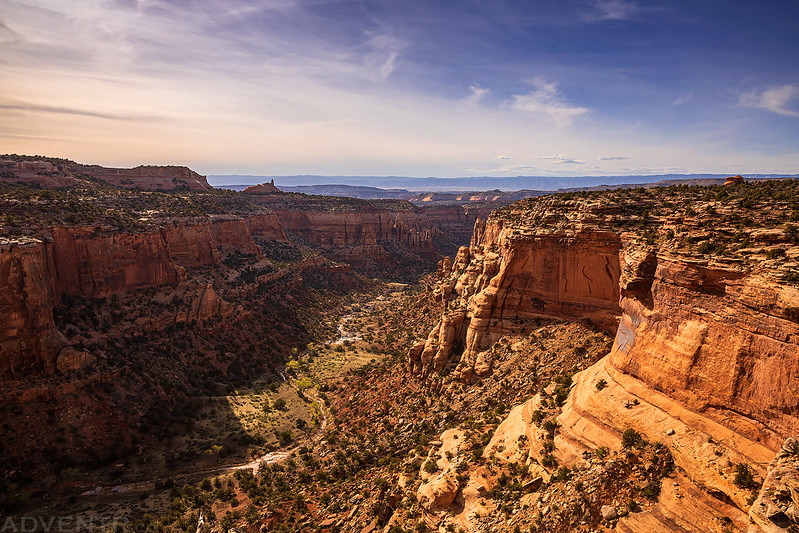 Crescent Fin Arch was pretty cool, too. The small opening reminded me of a thin crescent moon, like the one we would see later that night. 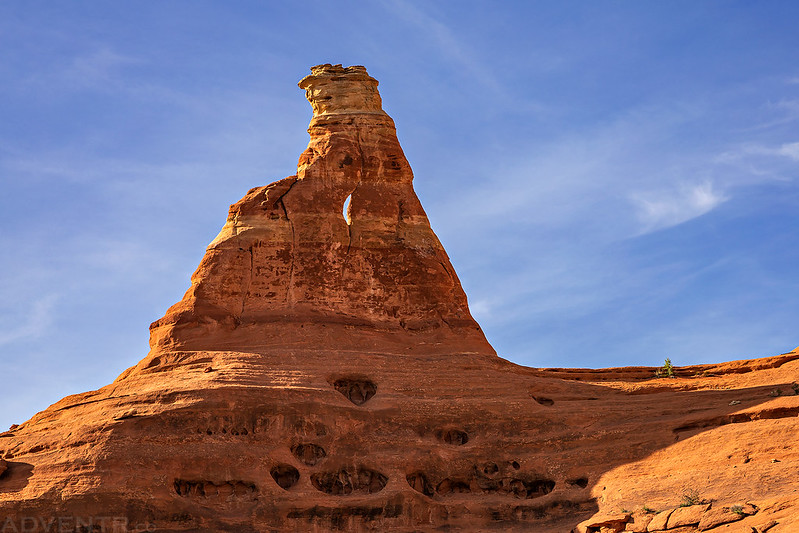 Easy walking along the bench on our way to the next arch. 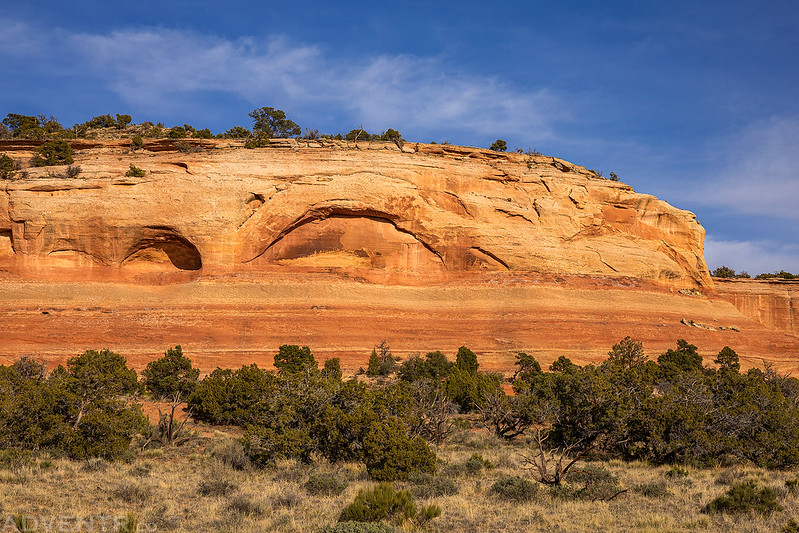 Will Minor Arch was my favorite, and also the largest arch that we visited this weekend, and I feel that it rivals any of the arches found over at the more popular Rattlesnake Canyon. I was curious who this arch was named after, so when I got home I did a little internet searching and found out that it was named after a sheepherder, amateur photographer and author who tended to sheep in the area. The U.S. Board of Geographic Names officially designated this arch as Will Minor Arch in 1993. 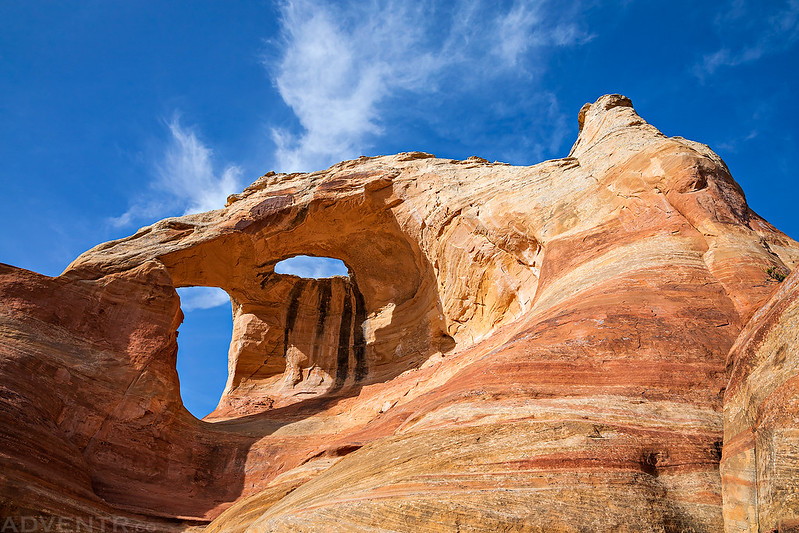 Here’s a view from the other side of Will Minor Arch which gives it a completely different look. 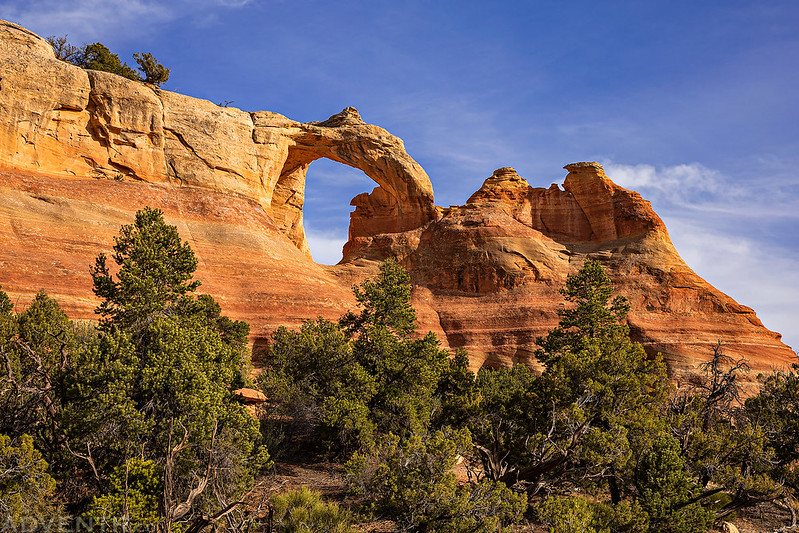 One last view of Will Minor Double Arch from yet another angle. We sat under the arch for a while and ate our dinner here. 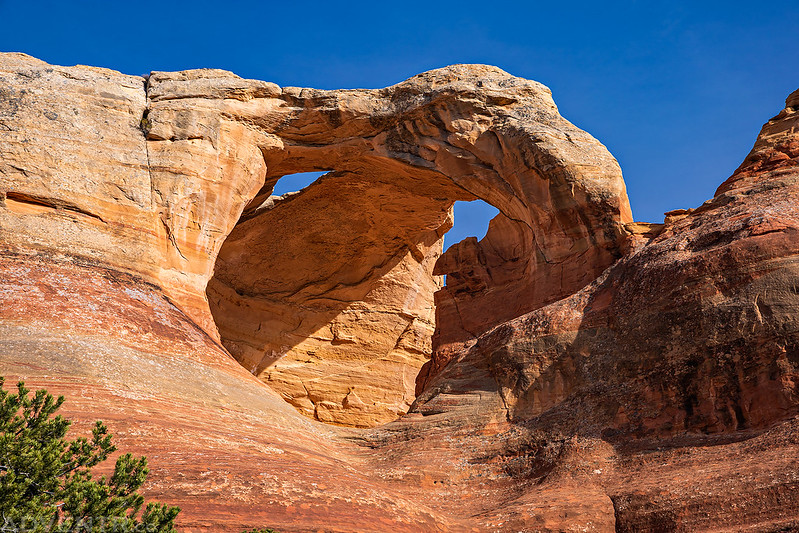 After leaving Will Minor Arch we hiked through a narrow passage between the mesa above and the canyon below. This spot offered a nice view into Mee Canyon and was also a clever location where cowboys had built a brush fence and left the mark of their brand on a nearby canyon wall. 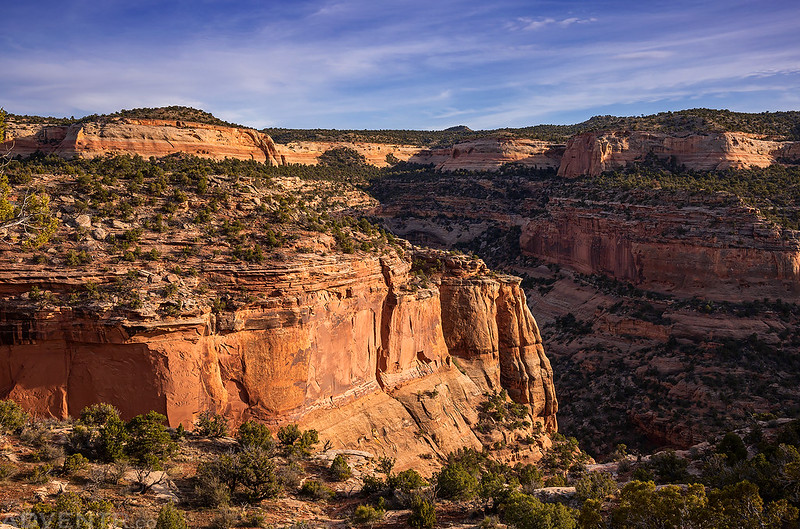 We followed the bench back to our campsite which is located at the base of that small butte in the upper right hand corner. 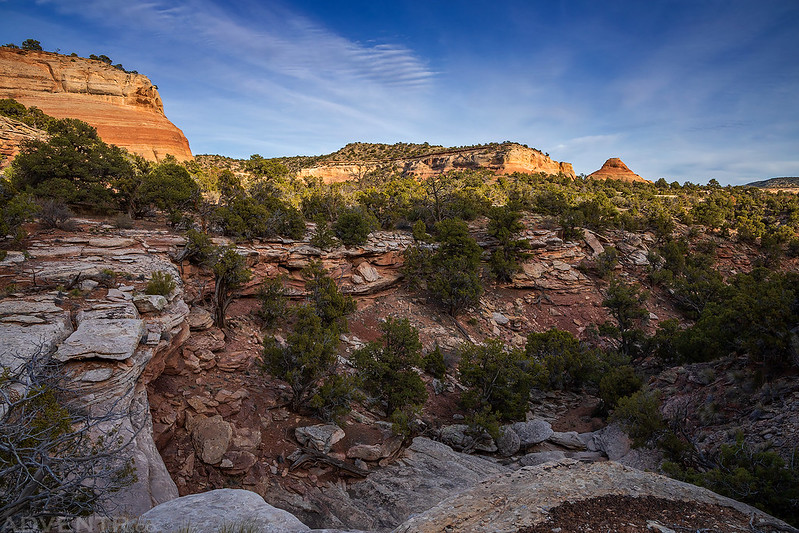 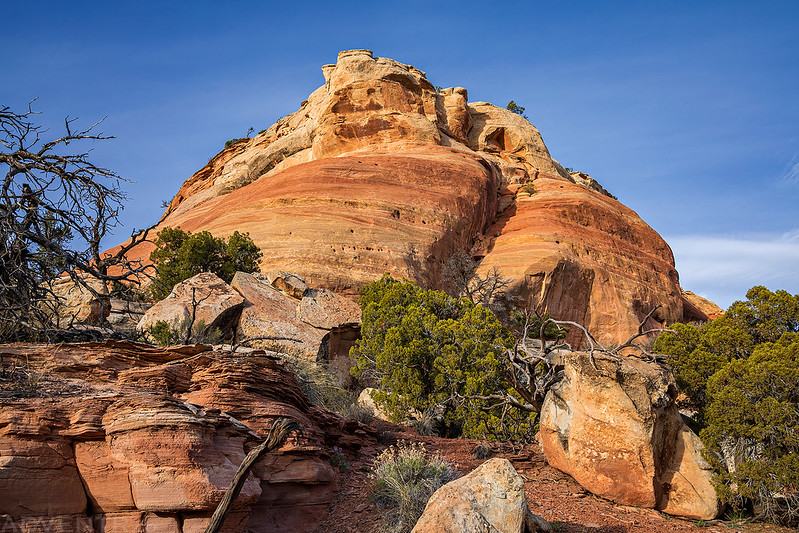 Our home for the night on the soft sandy ground below the small sandstone butte. 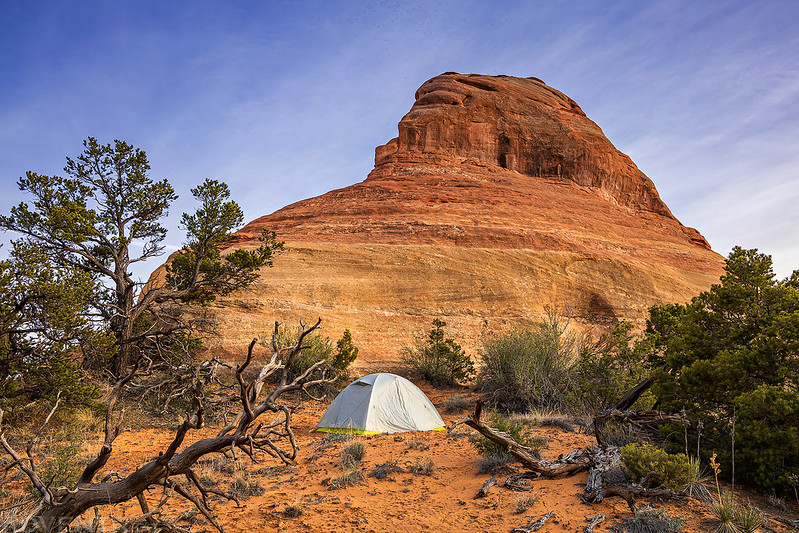 Although a bank of clouds had filled the sky while we were hiking back to camp, I walked over to the rim of Mee Canyon as the sun dipped below the edge of the clouds. The light was very nice for a few brief minutes. 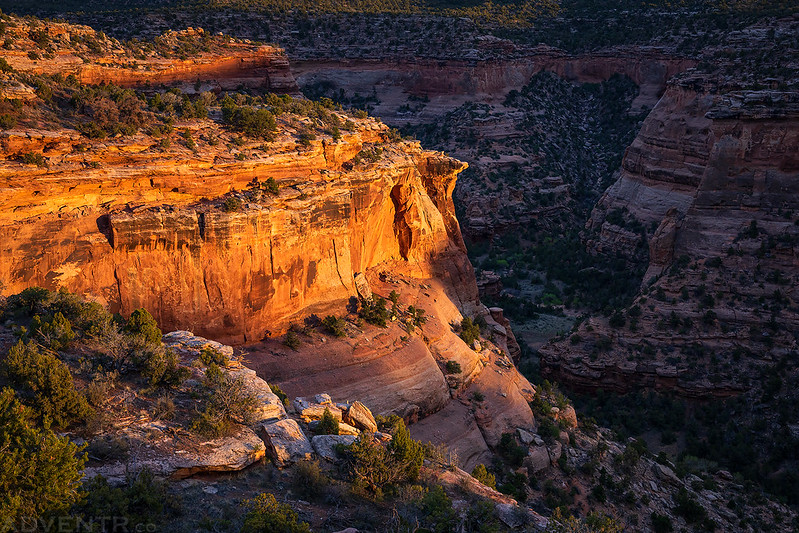 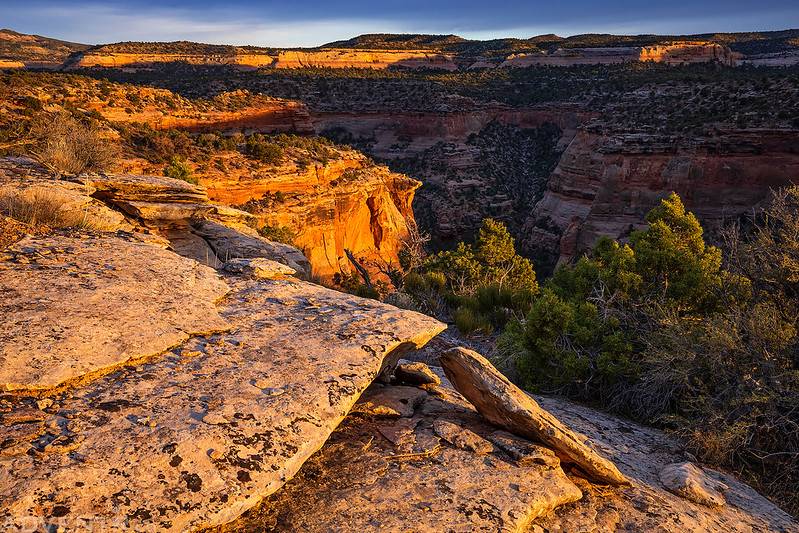 We watched the last rays of light strike Crown Arch before returning to camp. 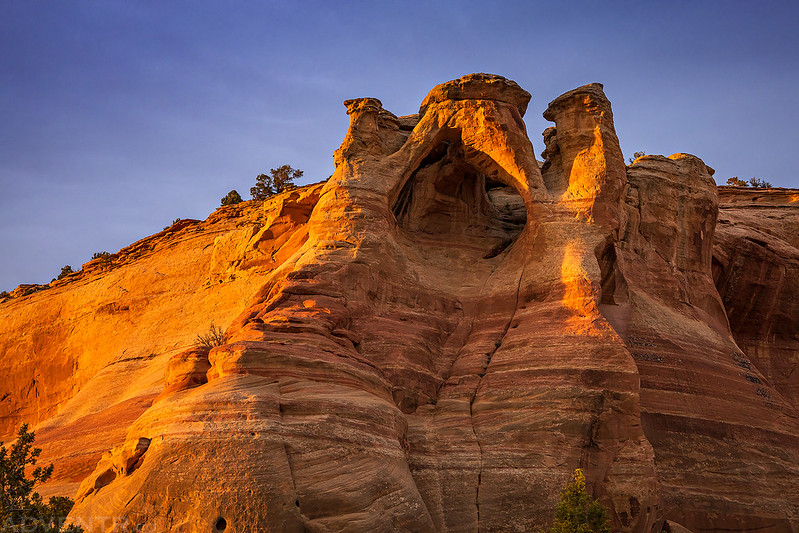 We had hiked about 13 miles total under the bright sun today and were pretty tired when we returned to camp, so we went right to bed. The night was calm and the temperature was perfect for camping, not too hot and not too cold. I slept very well. I had set my alarm to wake me up before sunrise on Sunday morning, but when it went off I looked at the sky and saw it was overcast, so I slept in a little later instead of trying to photograph the sunrise. It was a good decision. We both woke up a little later and packed up camp so we could start hiking out early in the morning before it started to warm up again.

The climb back up to the top of the mesa was much easier than the slippery descent had been. 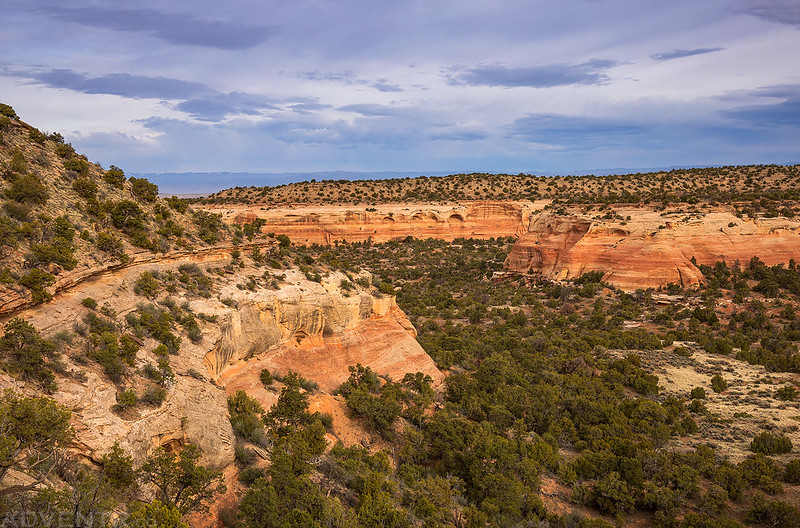 One last look back from the edge of the mesa before we left the area. 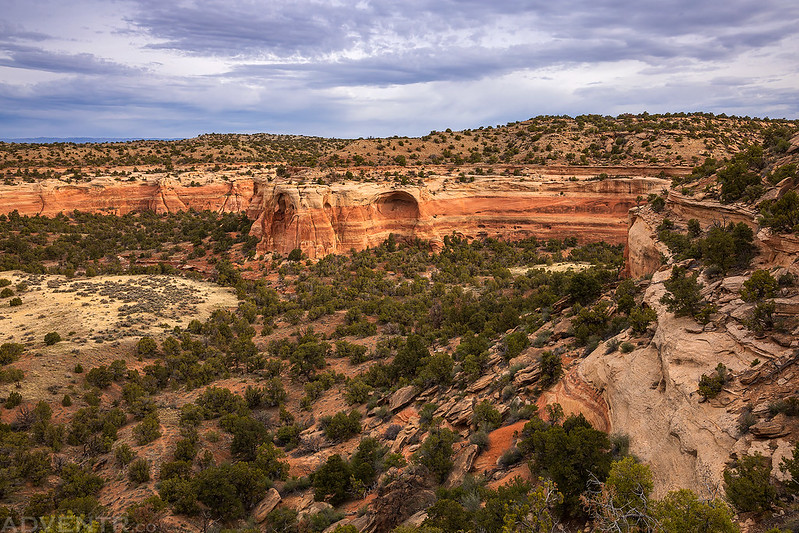 Colorful lichen on a rock I spotted along the trail. 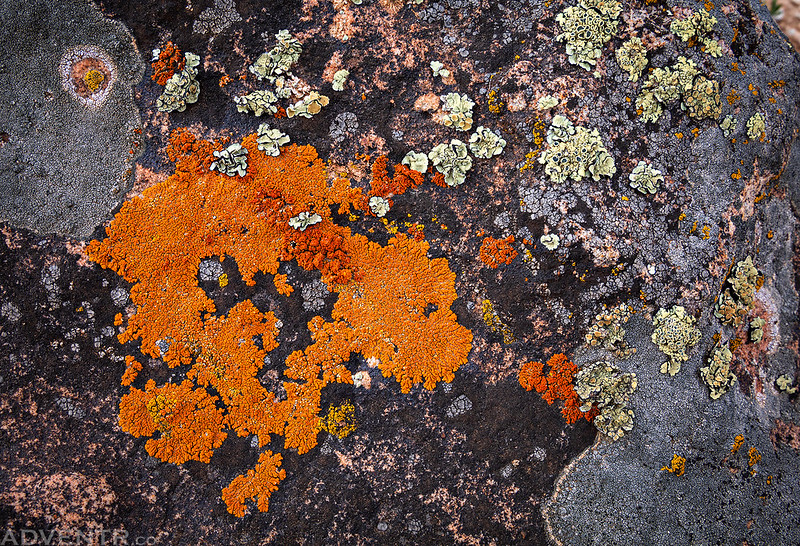 As we neared the trailhead we had a pretty good view over the Rattlesnake Canyon Arches. I would love to visit them again in the future, but I think I will wait until the Black Ridge Road is closed again.

We saw some great secluded arches this weekend, had plenty of solitude and were still close to home. Who could ask for anything more on a spring weekend in Western Colorado?