This weekend I felt it was time for me to attempt my first 14er of the year since the snow had melted of early and the monsoon season hasn’t really picked up yet. After looking at my options I decided to go all out and try to hike to the summit of Mount Massive (14,421) on Saturday morning, which is the second highest peak in Colorado after Mount Elbert, which I had already climbed two years ago. I spend Independence Day hiking in the La Sal Mountains to help prepare for the hike by getting a little acclimated to the elevation and making sure I was in good enough shape to give it a try. The hike in the La Sal Mountains went pretty well, although my legs were very sore for a few days afterwards which is very unusual for me. My legs certainly get tired after a big hike, but they’ve never been sore like this before. On Friday afternoon I considered cancelling the trip completely because the weather forecast was predicting early thunderstorms starting around 9:00am on Saturday morning, and even with a very early start I wasn’t sure if I’d be able to reach the summit and get down before they started. In the end, I decided to go anyway and see if I could squeeze the hike into the small window of good weather that was predicted. I figured that maybe I’d even be able to get some nice cloudy photos if the weather wasn’t good for hiking! 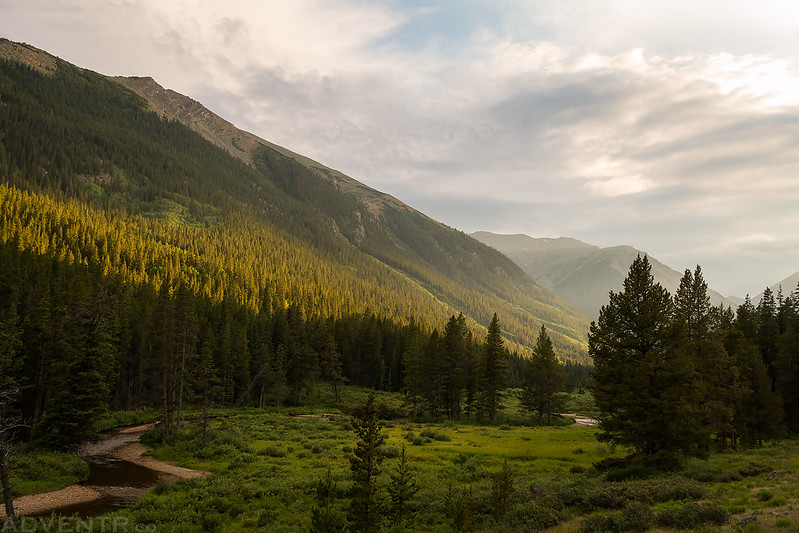 As usual, I left after work on Friday afternoon, grabbed some dinner and then headed to Leadville via I-70 and US24. My legs were still sore during the drive and I was really getting concerned that I really might not be able to make the summit on my first attempt for the very first time. I even came up with an alternate title for this trip report (Massive Failure), just in case I didn’t make it! As you can seen, I didn’t end up needing to use it. After reaching Leadville I topped off the fuel tank in my Jeep and then headed up Halfmoon Creek in search of a campsite for the night. I kind of figured this would be a popular place on a Friday evening, and I was right, but there were also a ton of campsites along the road to the trailhead and many of them were still open. I ended up driving just past the North Halfmoon Trailhead and crossed the creek in my Jeep where I found a nice open campsite on the other side with a view of Mount Elbert. The creek crossing was a little rough, which seemed to keep most everyone else on the other side, so I wasn’t expecting much traffic to drive past my camp overnight. I took a few photos at sunset, quickly set up camp and was in bed by 9:00pm so I could be up early for an alpine start on Saturday morning.

As I was driving along Halfmoon Creek in search of a campsite for the night the sun broke free of the clouds and created a beautiful scene in the valley, so I stopped for a couple of photos. 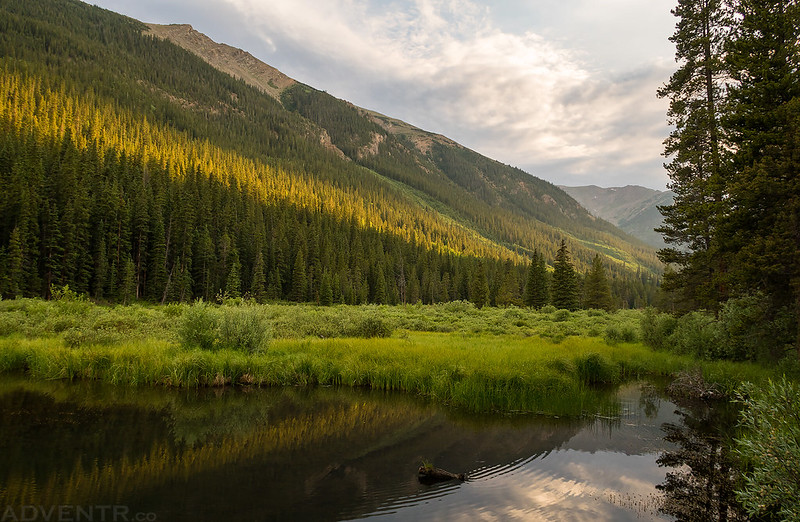 After crossing Halfmoon Creek in my Jeep, I came across a nice campsite just past the trailhead with a view of Mount Elbert to the south. 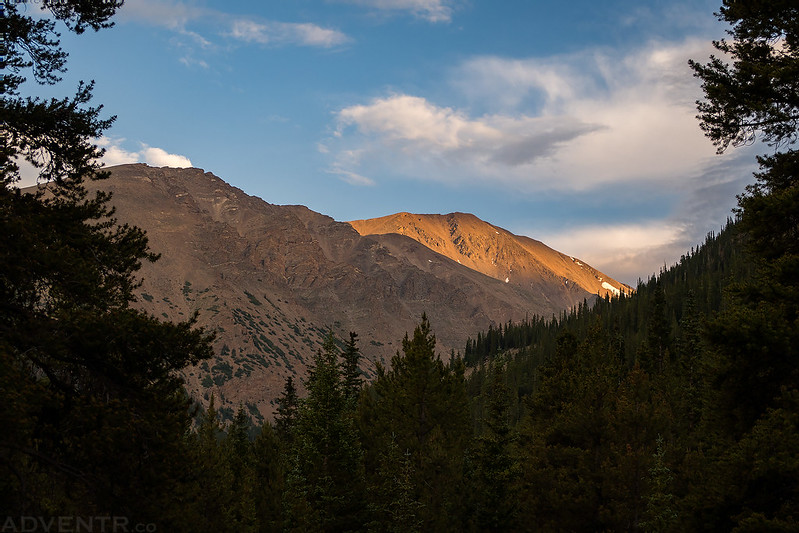 My Jeep parked at the campsite below Mount Elbert at sunset. 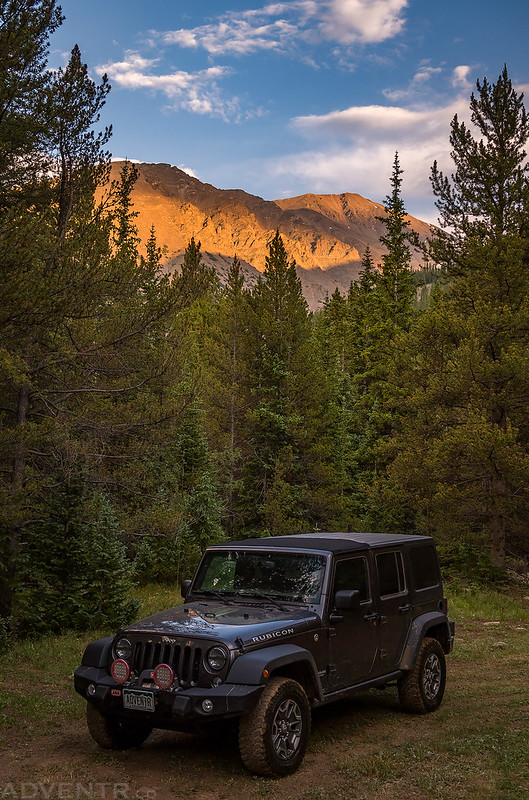 I woke up to my alarm at 3:30am on Saturday morning and was pretty well rested since I actually slept much better than I usually do the night before a climb. After having a little something to eat and driving back across the creek to the trailhead I was on the trail by 4:00am and hiking by the light of my headlamp under a sky full of stars and a quarter moon. I was able to watch the sunrise from about 12,000 feet on the southwest slopes of Mount Massive with great views of Mount Elbert, French Mountain, Deer Mountain and even La Plata Peak as I climbed higher. The hiking was slow going for me, but I actually was feeling pretty good throughout the hike. My legs were feeling pretty strong and the soreness had gone away. I wasn’t even having any issues with the thinner air at this elevation. I guess my long hike in the La Sal Mountains on Wednesday did help! I made it to the summit shortly before 8:00am, which means I was hiking at my standard pace of 1000 feet an hour, and had the summit to myself for a few minutes. There were no clouds in the sky at all throughout my entire hike, so I’m glad I didn’t put my trust in the weather forecast and cancel the trip.

Entering the Mount Massive Wilderness by the light of my headlamp. 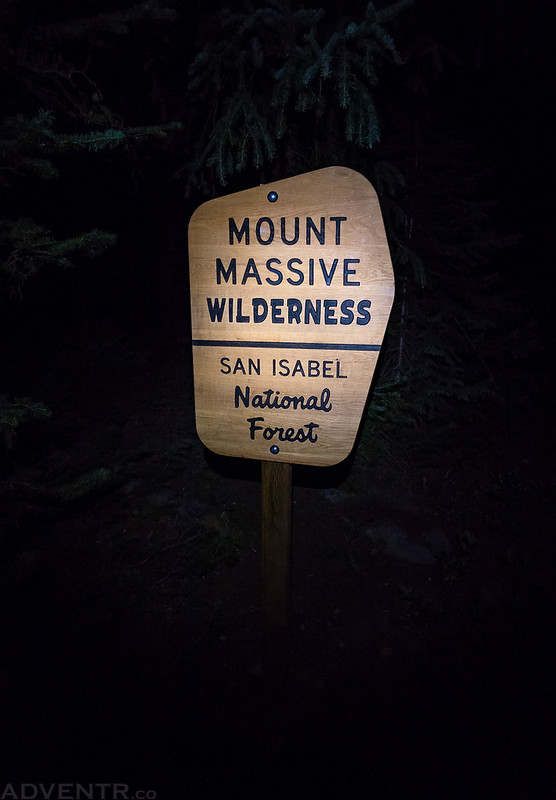 Climbing the trail on the southwest slopes of Mount Massive with a great view of the alpenglow on Mount Elbert and French Mountain. 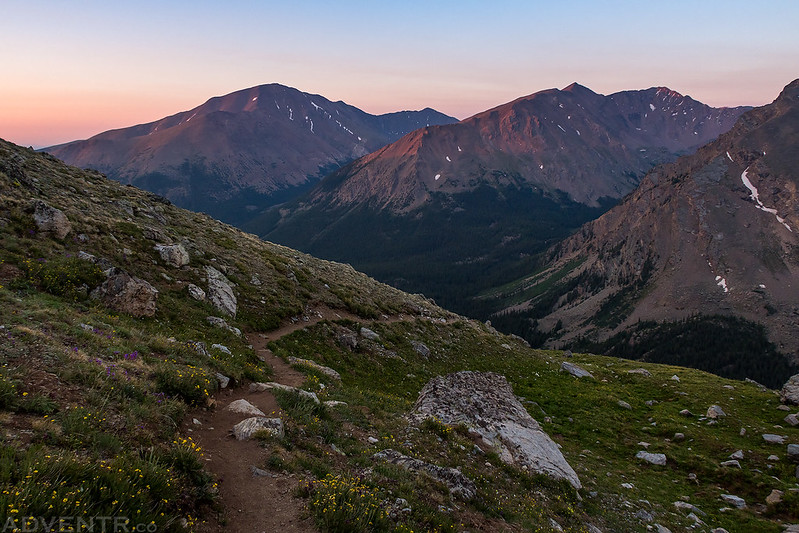 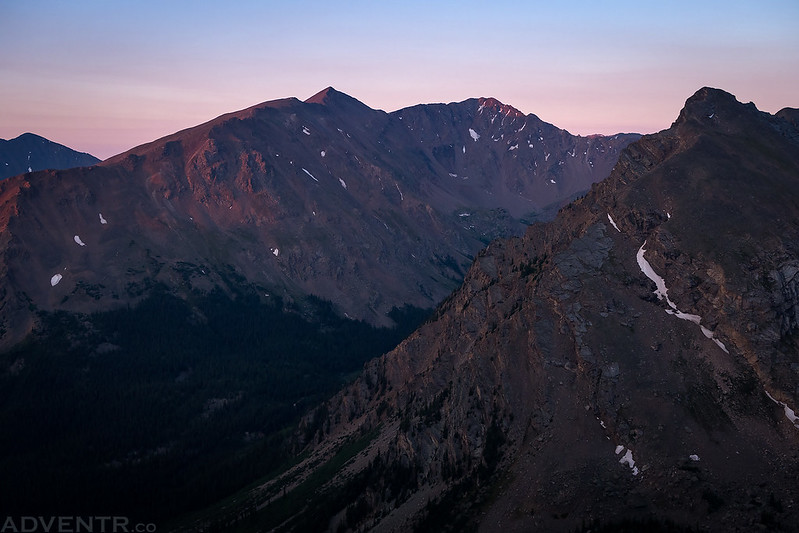 French Mountain (13,940) getting the first light of the day. 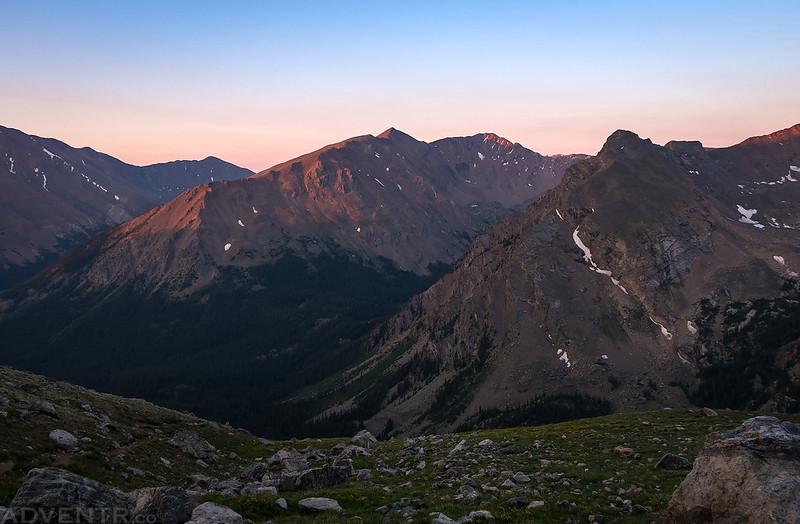 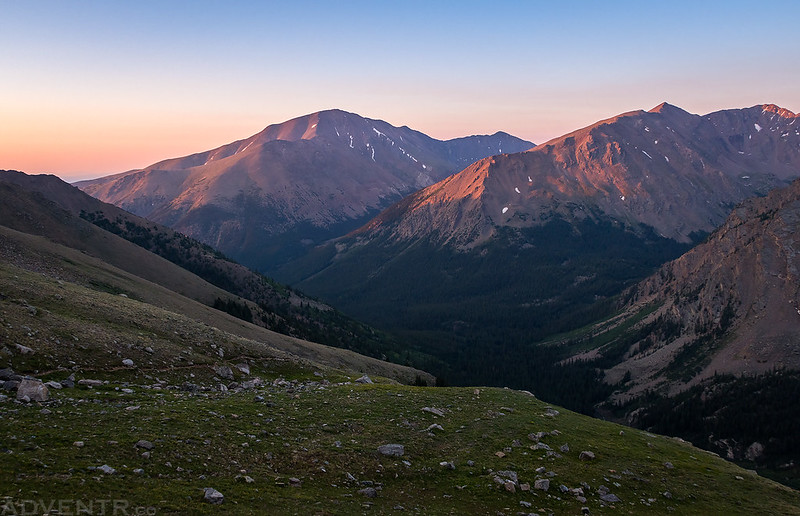 A closer look at Mount Elbert. 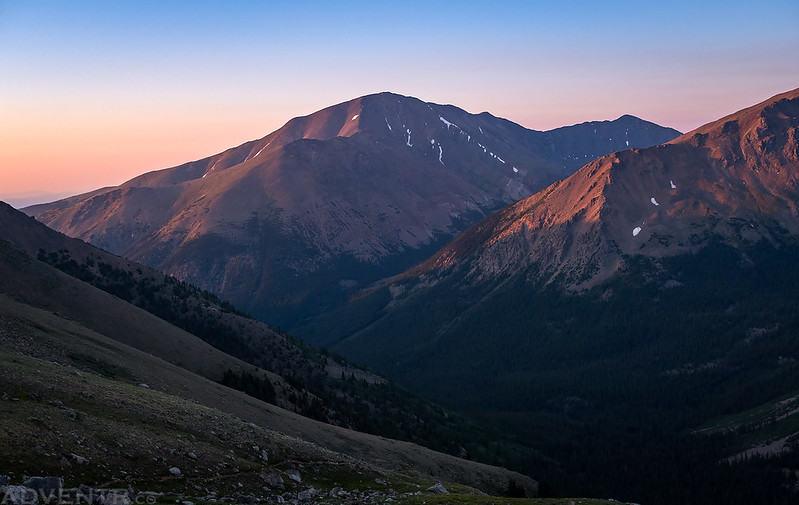 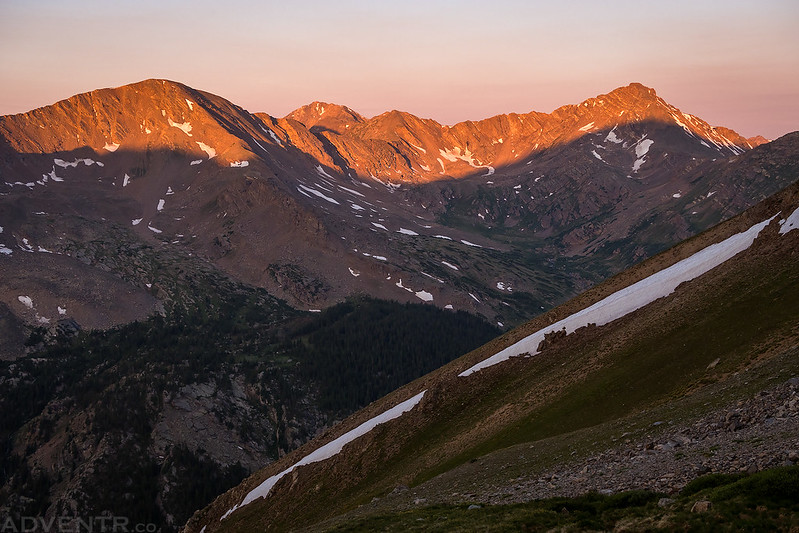 A closer look at Deer Mountain on the Continental Divide. 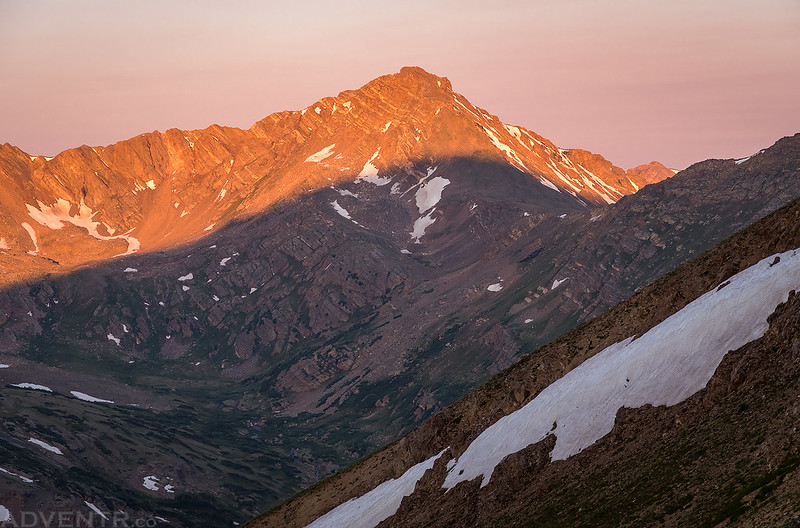 When I came around a switchback on the trail I had a pretty good view of Mount Oklahoma (13,845). 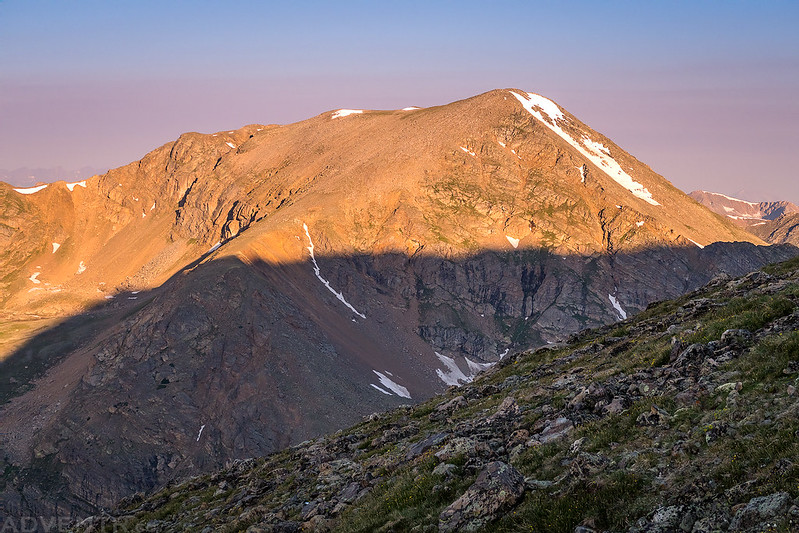 The smoke from nearby wildfires created these nice hazy layers. 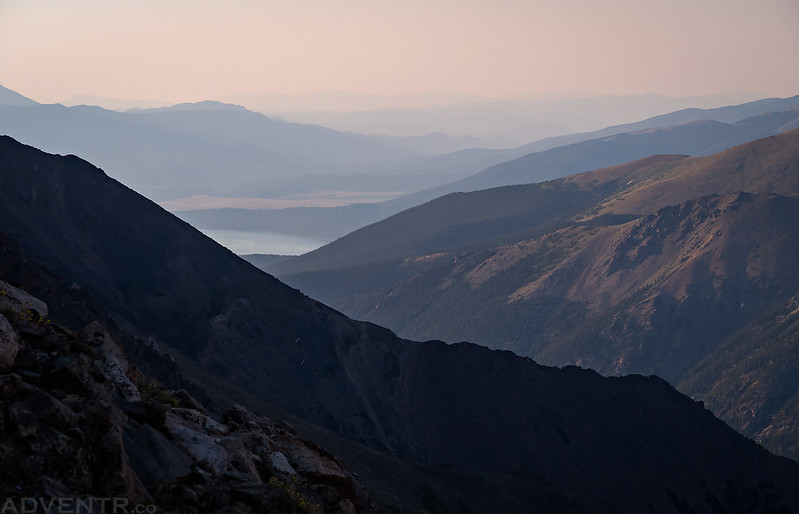 Most of the trail was on the southwest side of the mountain, so I didn’t see the sun until I neared the top of the summit ridge. 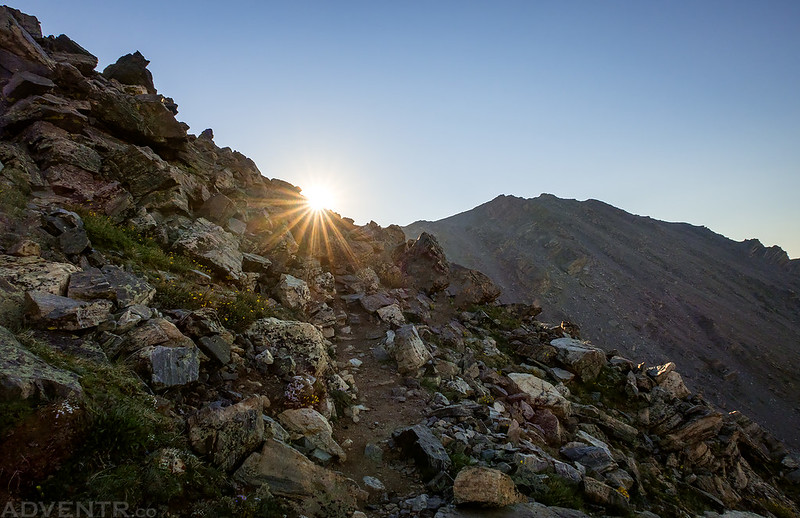 Looking back over the trail in the sun I was able to now see La Plata Peak (14,336) behind French Mountain. 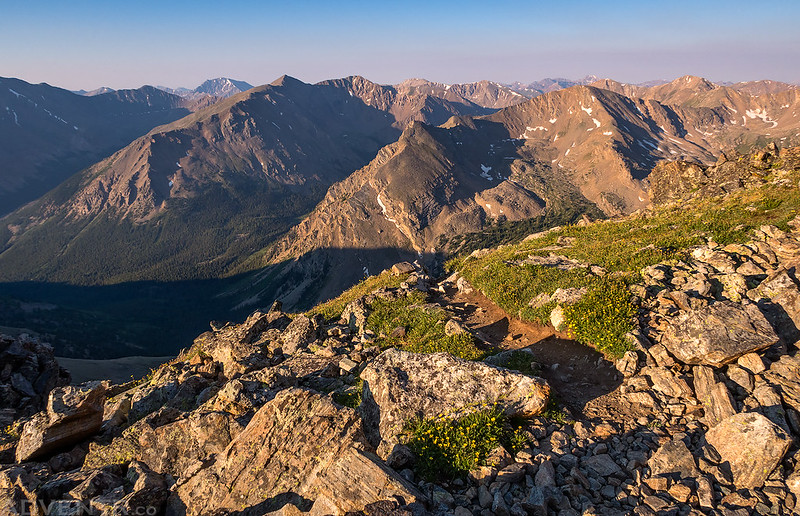 Once the trail crossed over the summit ridge and joined up with the main trail, it was a rocky climb to the actual summit, which isn’t visible yet. 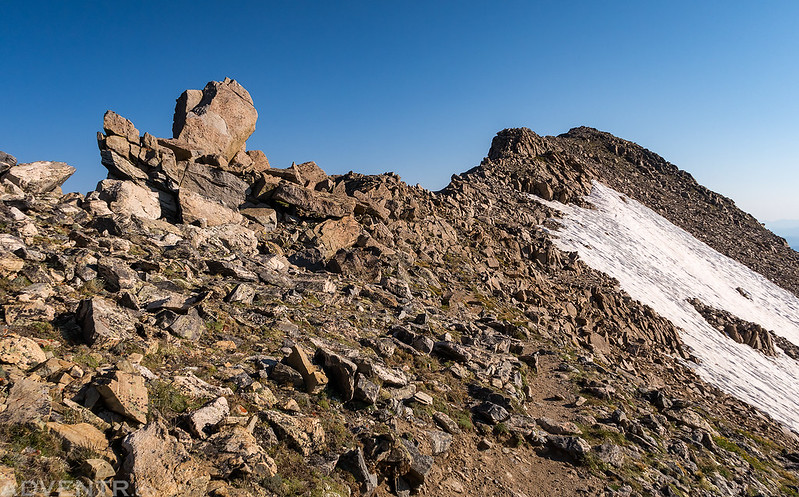 A view from the ridge. 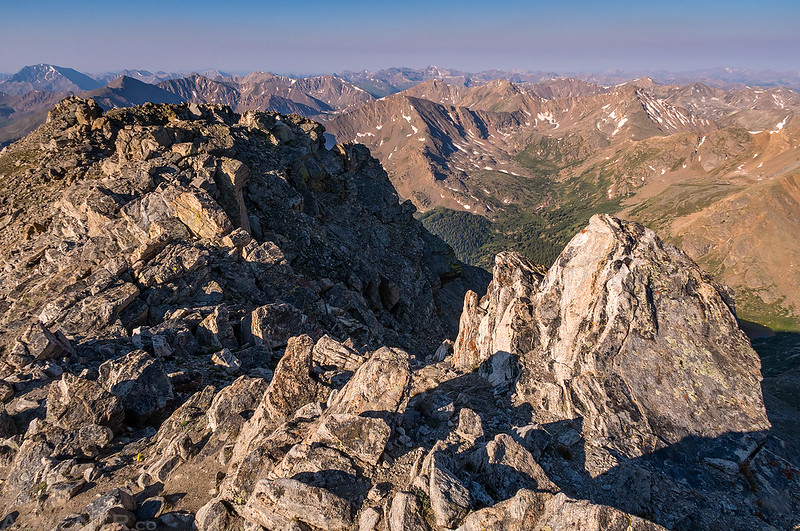 Hiking along parts of the ridge looked like this. 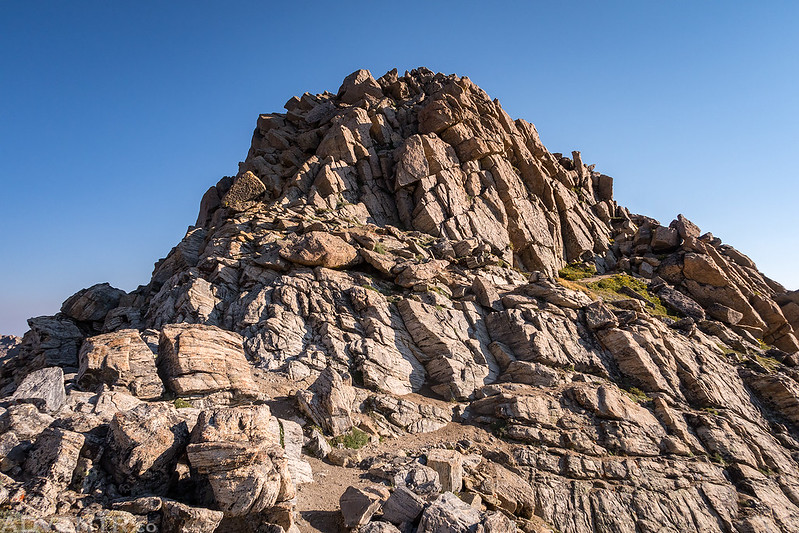 Looking back over South Massive and the Twin Lakes Reservoir to the Buffalo Peaks on the horizon. 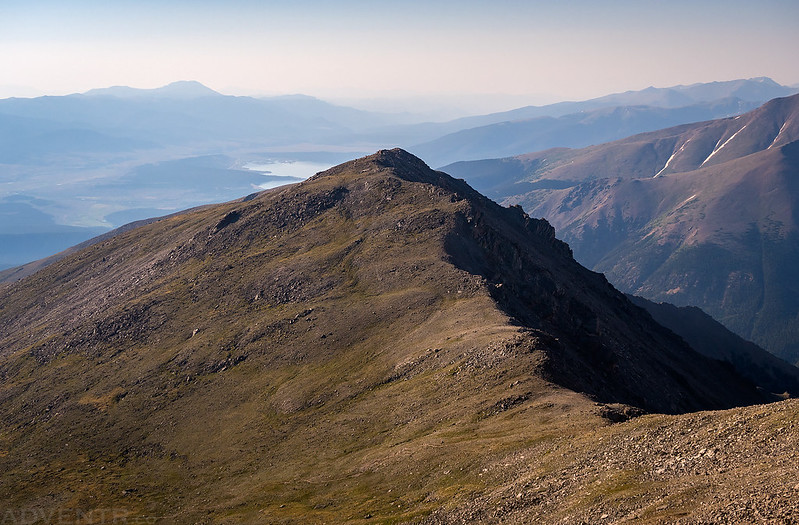 Finally, the true summit is in view after going over a few bumps on the ridge. 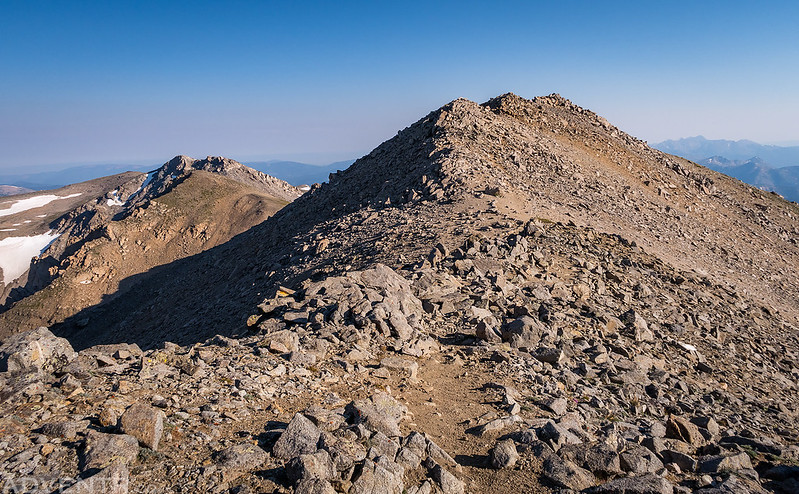 Looking back down the ridge from the summit. 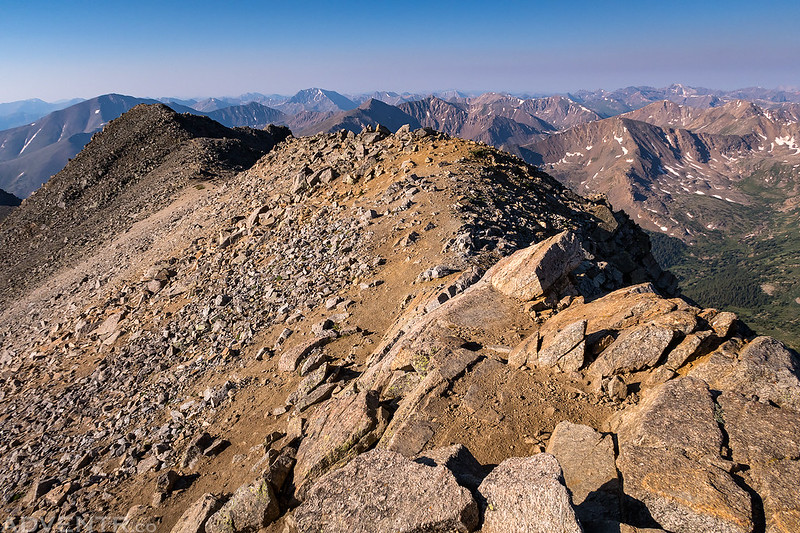 A view from the summit with the North Halfmoon Lakes below. You can easily see the smoke in the air in this photo, which is most likely from the Lake Christine Fire located in the Roaring Fork Valley near El Jebel. 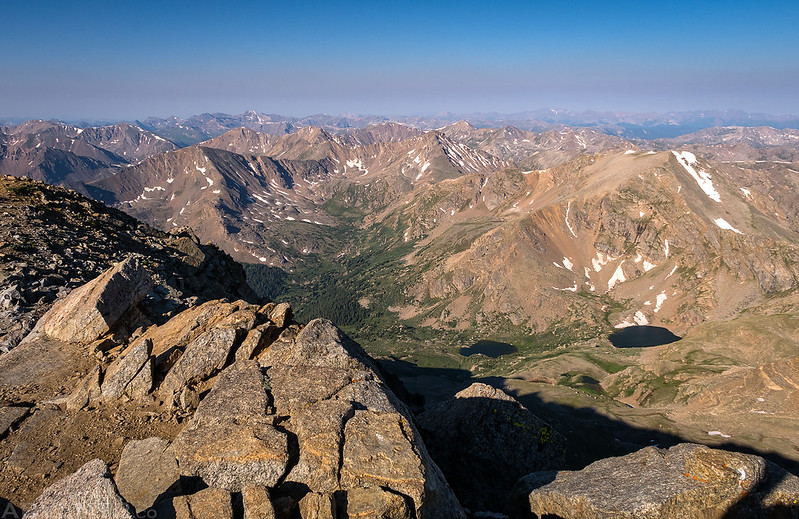 Following the trail back down from the summit after enjoying the views for a while. 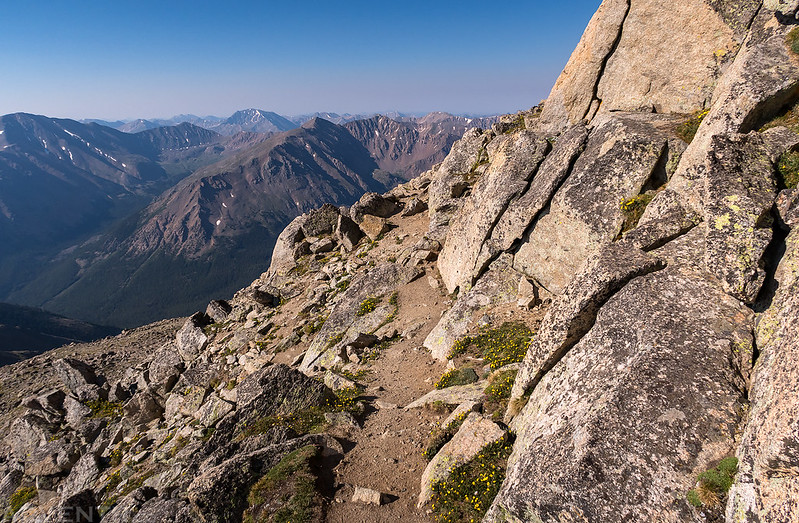 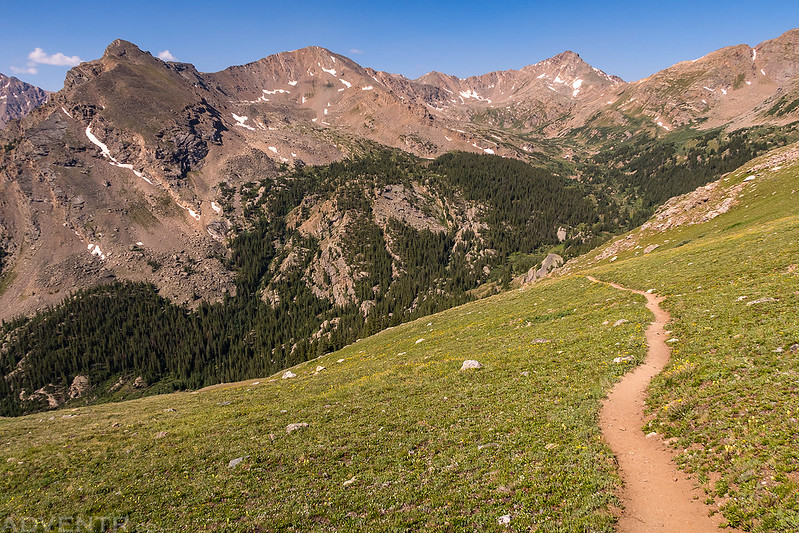 Just a photo of a small sign located at the lower intersection on the trail that I passed by in the darkness of the early morning. 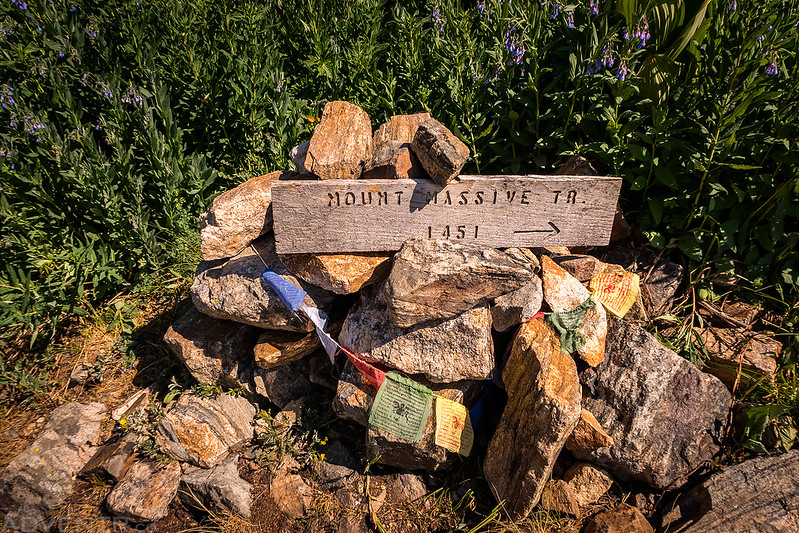 After hiking down from the summit and returning to my Jeep, I drove back into Leadville and had a calzone from High Mountain Pies for lunch. As usual, it was delicious! Then it was time for me to start heading back home, but before I did I wanted to drive up the road into the South Fork of Lake Creek since I had never been that way before. As I was exploring the area it started to rain a little bit, but not heavy enough to really get things wet.

I caught this spotlight on an unnamed 13er located in the Collegiate Peaks Wilderness as I explored the South Fork of Lake Creek in my Jeep. 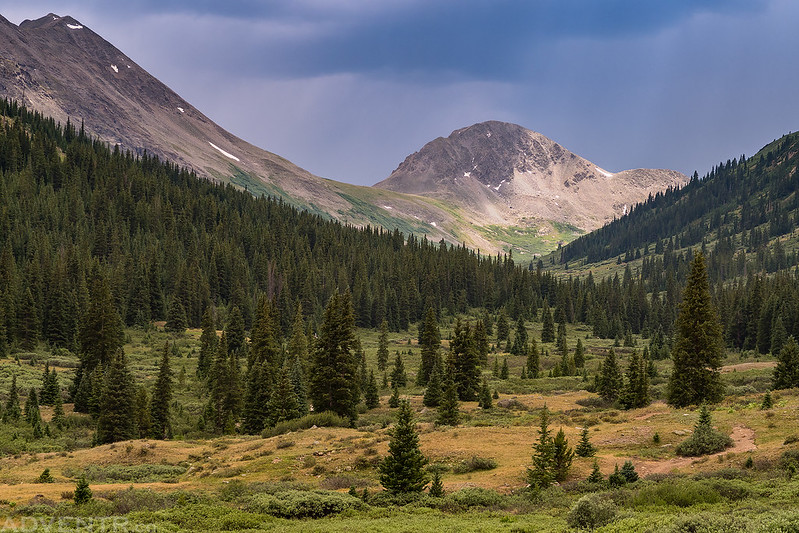 Following a two-track under a stormy sky. 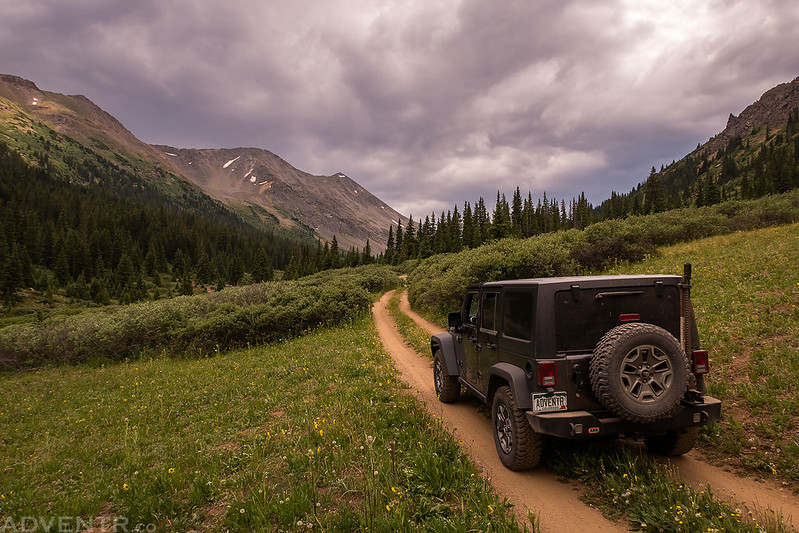 Rain visible from Independence Pass as I headed back home. While I was up at the pass I could hear rumbles of thunder but didn’t actually see any lightning. 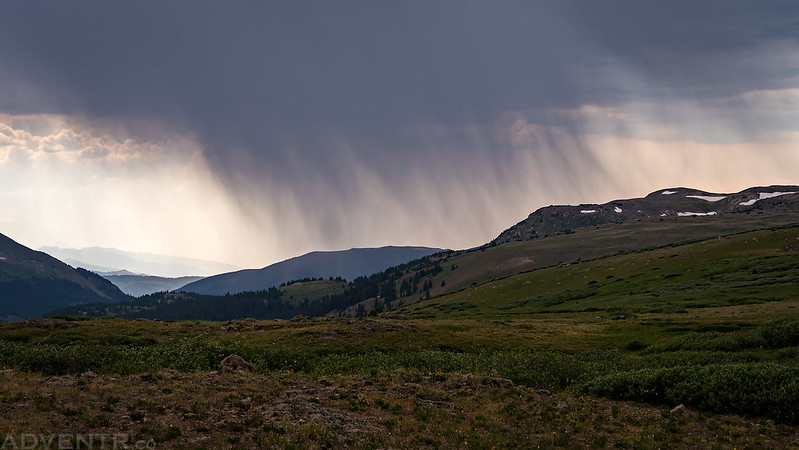 Throughout the rest of my drive home, I would pass though on and off rain. The heaviest of the rain was encountered just before I reached Aspen, but there were a few good cloudbursts while I was on I-70, too. When I got to Parachute I noticed a double rainbow out the drivers side window of my Jeep and the storm that produced it seemed to be moving the same direction as me because that rainbow followed me all the way to De Beque. Now that I’ve got my first 14er of the year out of the way, I’m looking forward to attempting a few more next month!