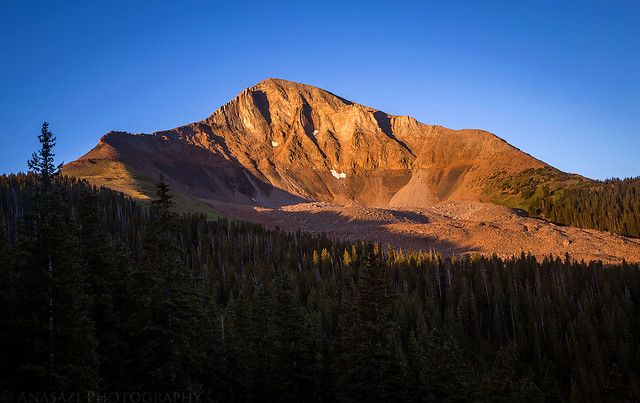 The Devil’s Chair of Lone Cone at sunrise as I stopped at an overlook on my way to the summit.

After hiking a few peaks in the morning and then eating a late lunch in Silverton I started my drive to the western edge of the San Juan Mountains so I could finally climb Lone Cone on Sunday morning. Even though Lone Cone is only a 12,000+ foot peak, it’s isolation from the rest of the range really makes it stand out. Since I had plenty of time to get to the trailhead I took the scenic route over Ophir Pass to reach Colorado Highway 145 on my way to Norwood. Unfortunately, once on the pavement I would encounter three different accidents that would slow down the drive a bit. First there was a smashed up Toyota FJ near the turnoff to the Alta Lakes and then there was a cleanup from an overturned truck at the intersection of 145 and Highway 62 near Placerville. Finally, as I was driving up Norwood Hill there was a motorcycle accident that had the highway completely shut down for a little while. Thankfully the closure didn’t last very long after I arrived and they started alternating traffic in one lane.

A view along the Ophir Pass Road as I made my way from Silverton to Norwood. 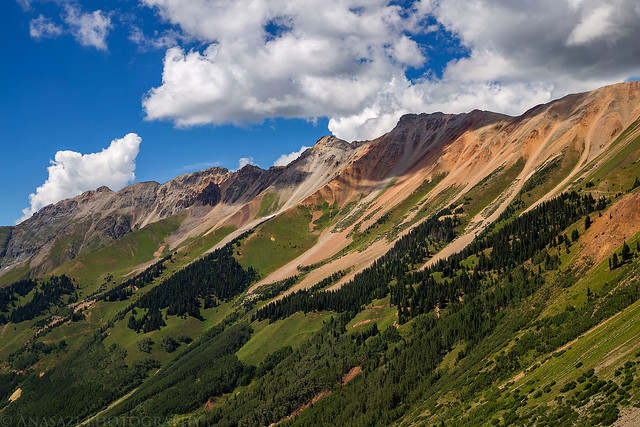 A marmot sitting on a rock along the road didn’t seem to mind when I drove by. 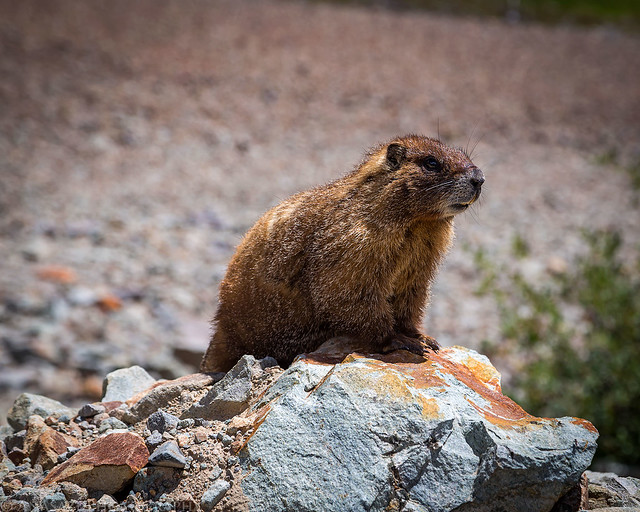 After finally arriving in Norwood, I topped off the gas tank in my Jeep and then headed out to the trailhead for Lone Cone. I had some rough directions to the trailhead with me, but I wasn’t sure how rough the road was going to be. It turns out the road was easier than I thought it was going to be and I arrived much sooner than I had anticipated. Since I had plenty of time before sunset I went for an evening hike up the Lone Cone trail and found a nice overlook that I planned to return to in the morning for sunrise. I returned to the trailhead after the short hike and setup camp nearby. Some clouds moved in around sunset and it rained a little bit, but the precipitation didn’t last very long.

An evening view of Lone Cone from an overlook near the trail to the summit. 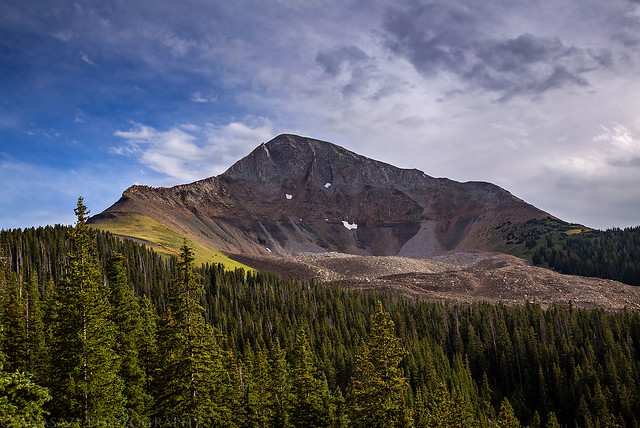 Hiking back down through the forest to the trailhead. 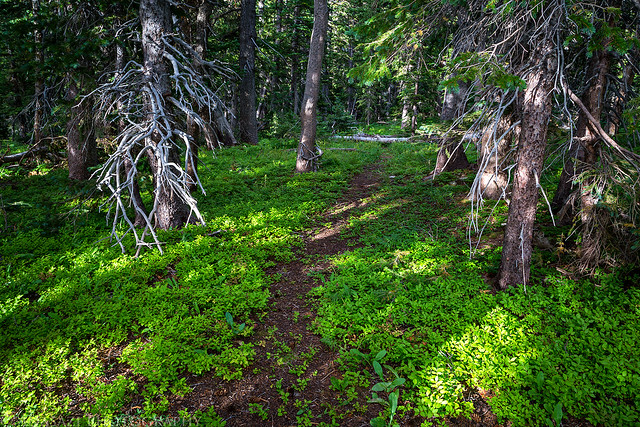 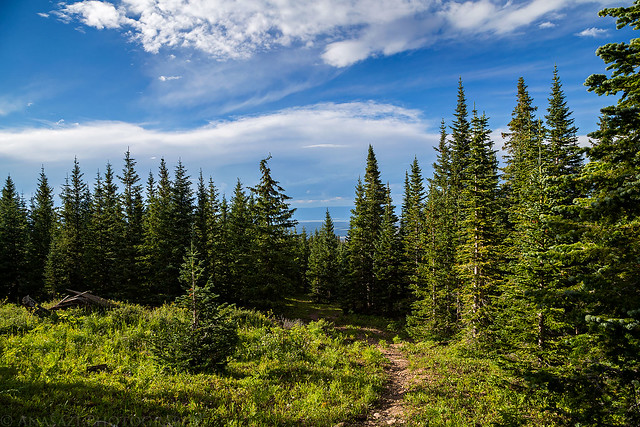 On Sunday morning I woke up about an hour before sunrise and started hiking up the trail to the overlook. When I started hiking there were nice clouds above Lone Cone and I had my hopes up for a great sunrise. However, by the time I reached the overlook all of the clouds had disappeared and the sky was completely clear over the peak. After taking a few photos during the sunrise I continued up the trail toward the summit. Shortly before leaving the forest a red fox ran across the trail right in front of me, but I was too slow to get a photo. Soon I found myself on the Northeast Ridge and had to cross the Devil’s Chair rock glacier to reach the North Ridge. I climbed the North Ridge straight up to the summit and arrived around 8:20am where I enjoyed the surrounding views of the Abajo Mountains, La Sal Mountains, Uncompahgre Plateau, Sneffels Range, Wilson Group and Mesa Verde. By this time some darker clouds and rain had moved into the area, so I didn’t stay on the summit for very long. Of course, by the time I reached my Jeep at the trailhead most of the clouds had disappeared and it was clear and sunny out once again…

A view of the La Sal Mountains in the distance shortly before sunrise. 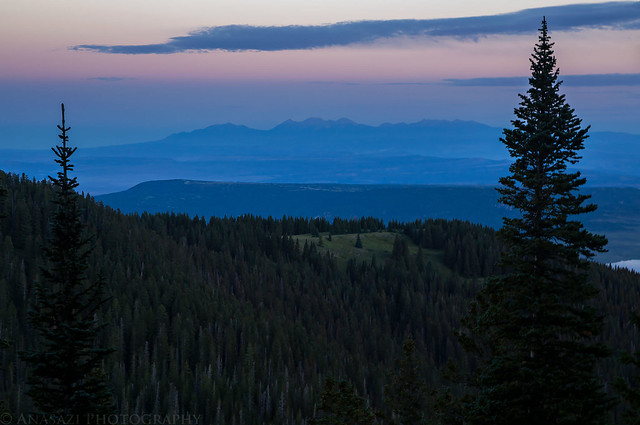 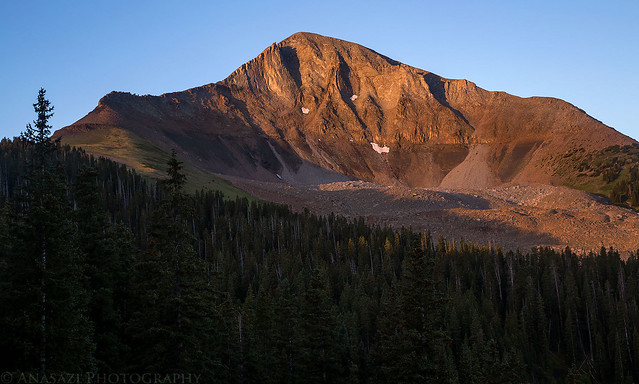 Even though there was a lot of dead-fall on the trail to get around, it does look like the trail was maintained at some point in the past… 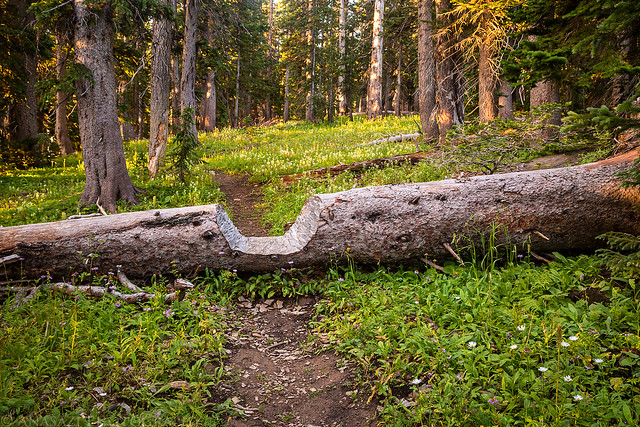 My first view of Lone Cone after exiting the forest on the Northeast Ridge. 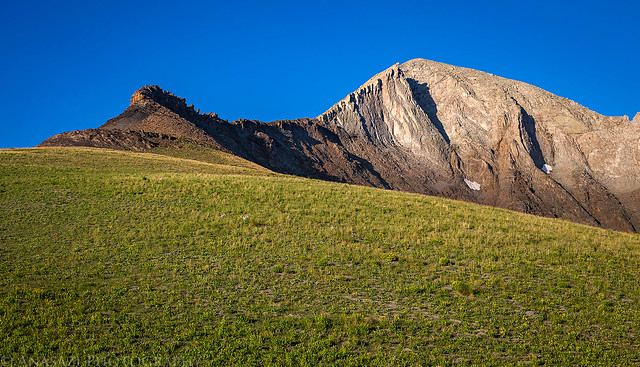 Crossing the rock glacier below Devil’s Chair to reach the North Ridge. 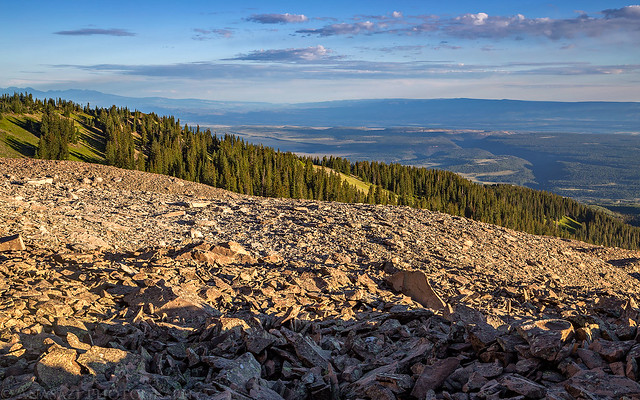 Looking up at the summit above. 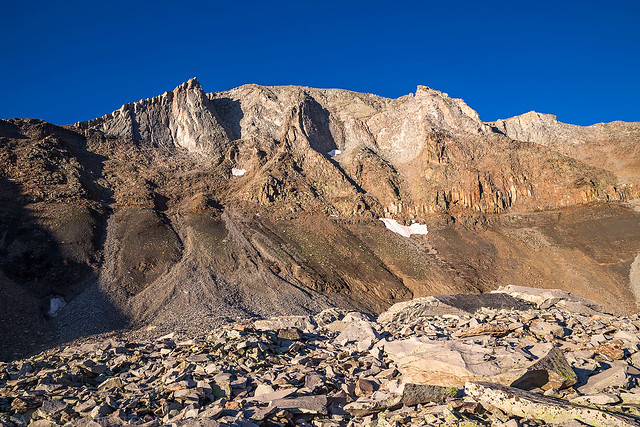 Climbing the rocky North Ridge to the summit. 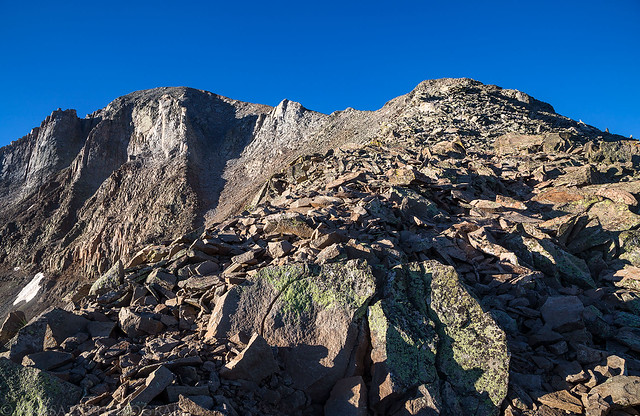 The final stretch to the summit… 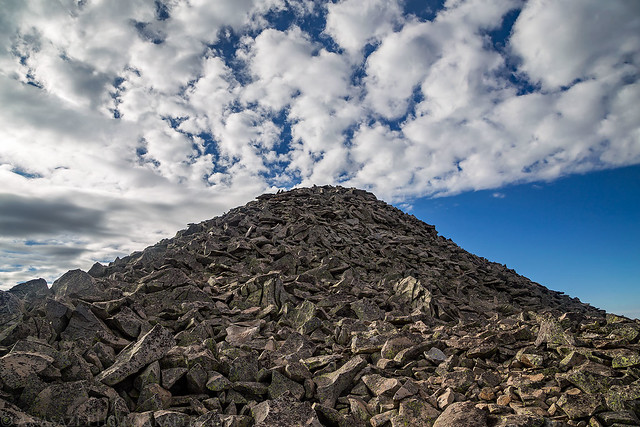 Looking down on the rock glacier below the north face. 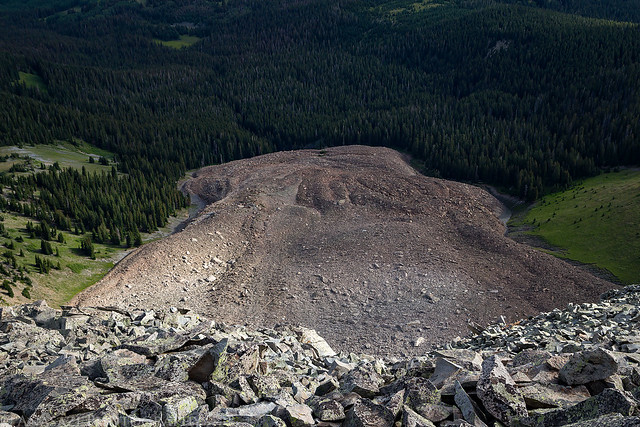 A view from the summit towards Utah with the Abajo (Blue) Mountains straight ahead and the La Sal Mountains off to the right. 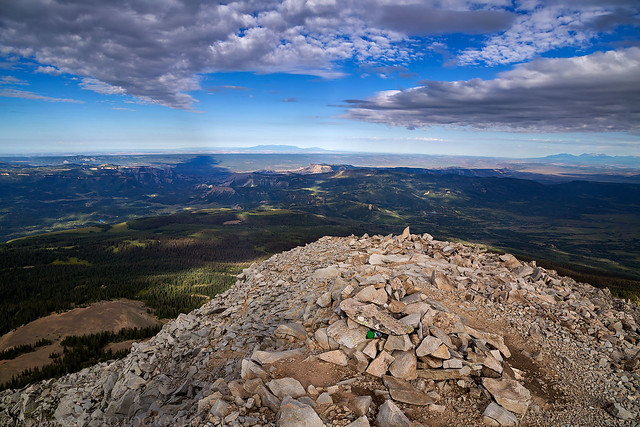 A view over the rock glacier towards the Sneffels Range past Little Cone (11,981). It feels like just yesterday we were looking past Little Cone to Lone Cone from the summit of Last Dollar Mountain. 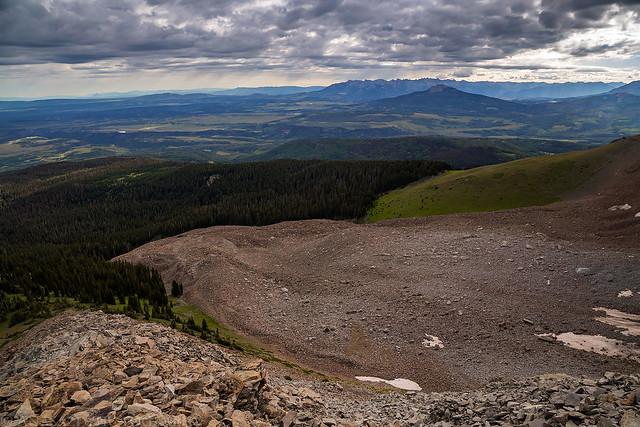 Hiking back down the rocky ridge. 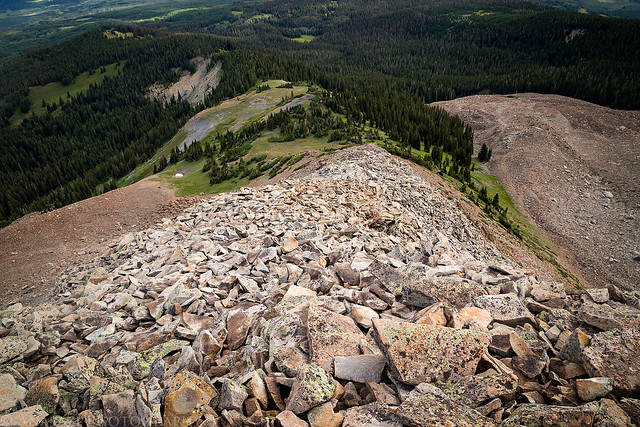 One last look back at the summit from the North Ridge during my descent. 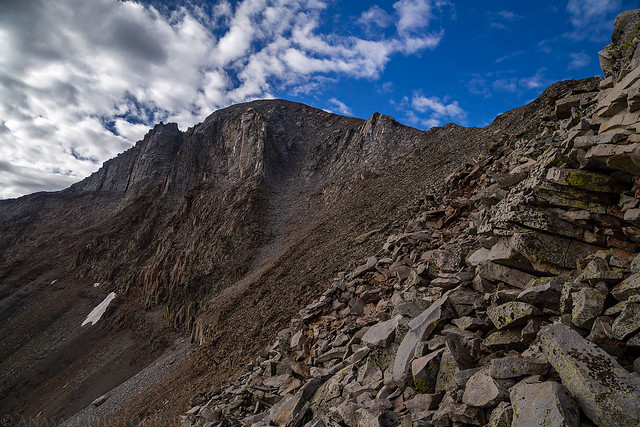 After returning to my Jeep at the trailhead it was time to start heading back home, however, instead of taking the highways around the Uncompahgre Plateau back to Grand Junction, I decided to drive up to Nucla and take the Delta – Nucla (25 Mesa) Road right over the top of the Uncompahgre Plateau instead. It was a shorter and more scenic route. When I reached Delta I stopped for a late lunch and then finished the rest of the drive home.

One last look at Lone Cone from Beef Trail Road as I started the drive back home. 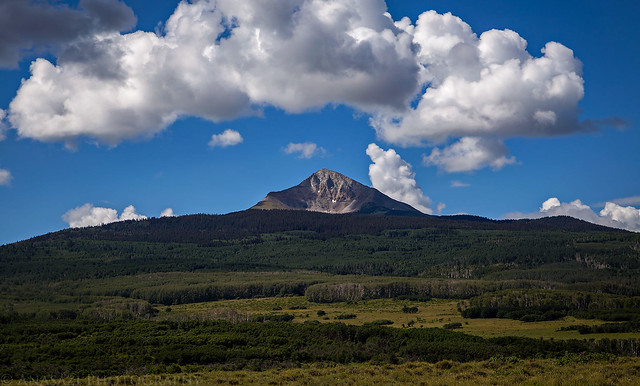