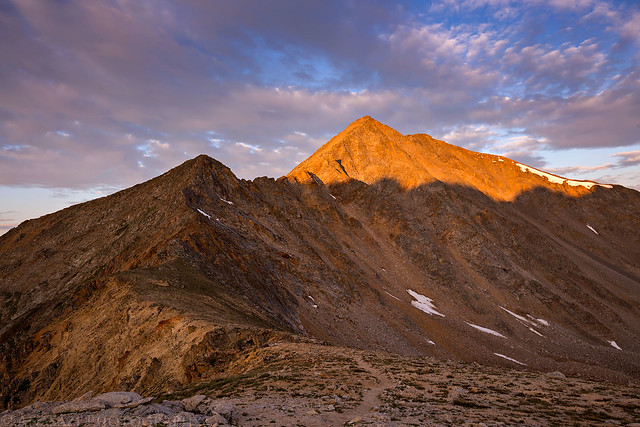 Since we had no other plans other than to climb La Plata Peak (14,336) this weekend and the weather was looking good both mornings, we slept in on Saturday morning and didn’t leave home until later in the morning. We took our time driving over Independence Pass on our way to Winfield. After following the North Fork of Clear Creek for a little bit we found a nice campsite and setup camp before the afternoon storms started to move into the area. Since I needed to get gas for the Jeep we drove into Buena Vista to fill up the tank and finally had an opportunity to try a burger and fries from K’s Dairy Delite for dinner. The food was pretty good. After returning to camp I went for a short hike on a section of The Colorado Trail that was nearby to help get acclimated. During the short hike it started to drizzle a little bit and would continue to rain for a little while after we went to bed early, but the precipitation didn’t last very long. 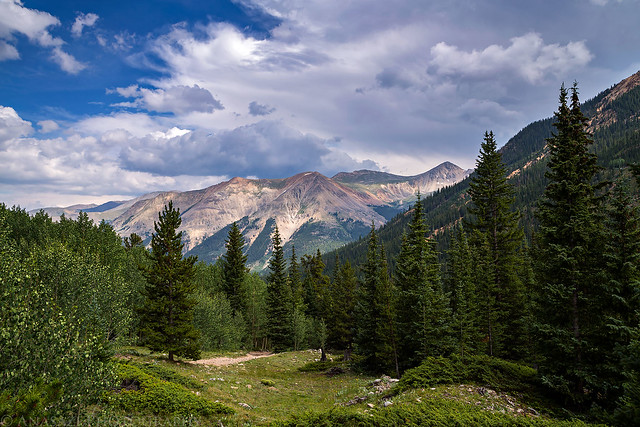 Driving back to camp after checking out the West Winfield Trailhead. 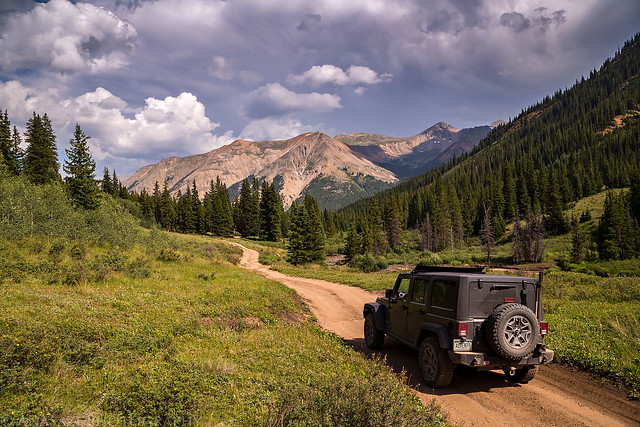 A view up Clear Creek on our drive back from Buena Vista. 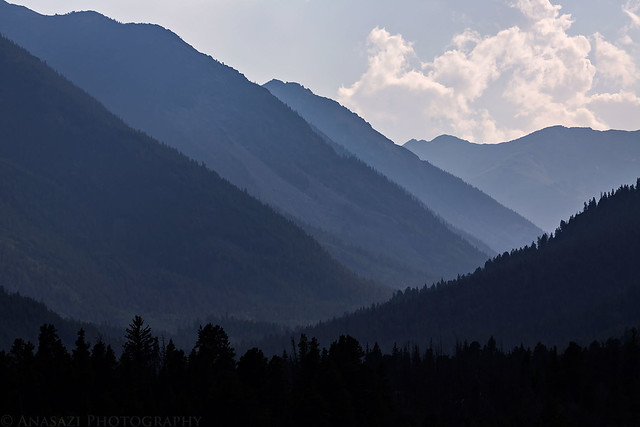 An intersection on The Colorado Trail and Continental Divide Trail near our campsite. 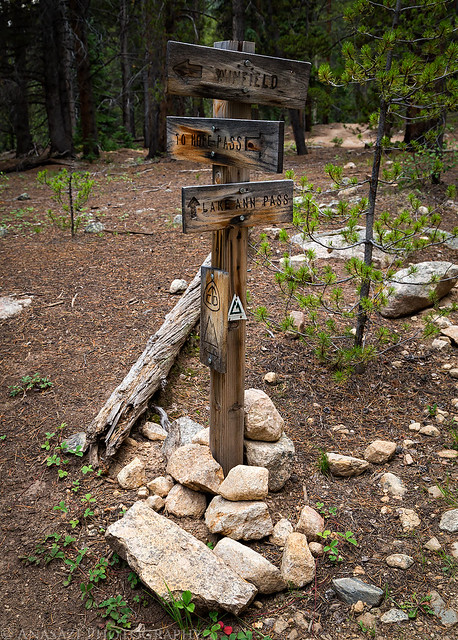 An evening hike through the trees on The Colorado Trail. 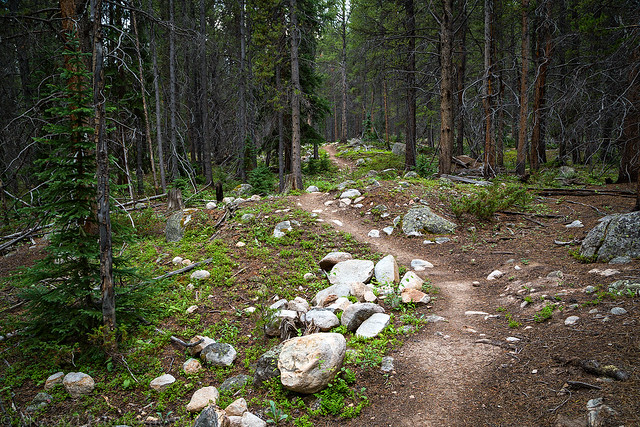 I typically don’t sleep very well the night before a climb, or at least I don’t think I do. I’ve come to realize that sometimes I dream that I am lying awake in the sleeping bag trying to go to sleep. Does this happen to anyone else out there? Anyway, this night was no exception and I felt like I was lying awake in the tent all night trying to get to sleep. I wasn’t extremely tired when our alarm went off at 3:30am for an alpine start, so I must have gotten some sleep? We drove the short distance to the trailhead and started hiking shortly after 4:00am under the stars that were just beginning to peek out from behind the clearing clouds. The first part of the trail to the end of the basin was pretty easy and not too steep, but there were a few sections that were very muddy and slippery where the trail weaved through thick willows. When we arrived at the bottom of the first steep climb out of the basin to the saddle shortly before sunrise, Diane was not feeling well and decided to turn around and head back down to the trailhead to wait for me in the Jeep.

Near the top of the basin before the steep climb to the saddle it was finally getting light enough for me to take out the camera. 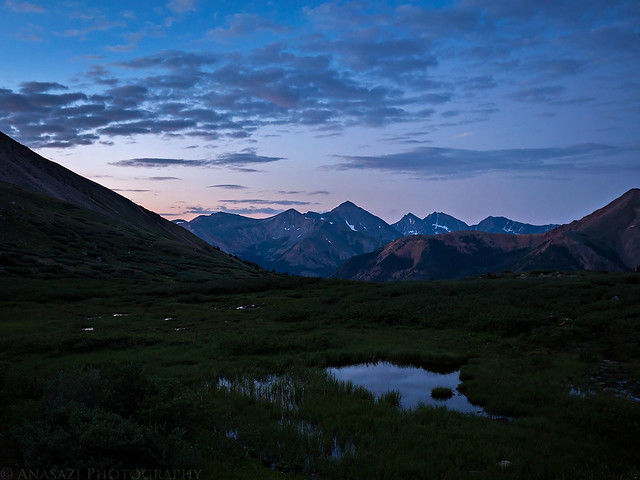 Climbing the steep trail to the ridge above. 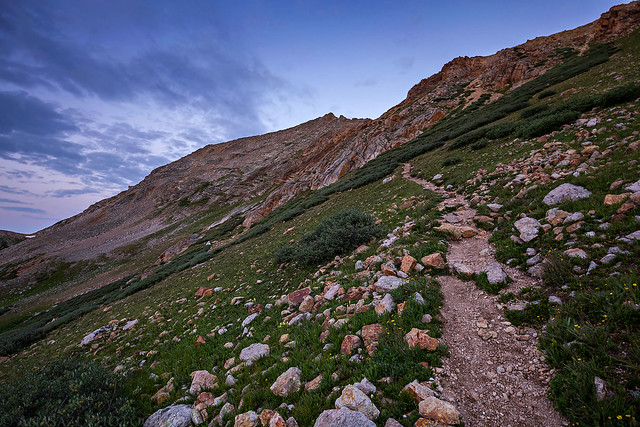 As I was climbing the trail to the saddle, there was a pretty great sunrise with amazing views of Huron Peak (14,003) and the Three Apostles, including the surrounding mountains. 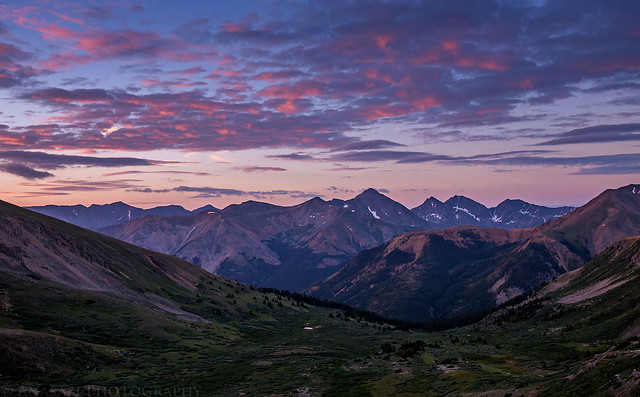 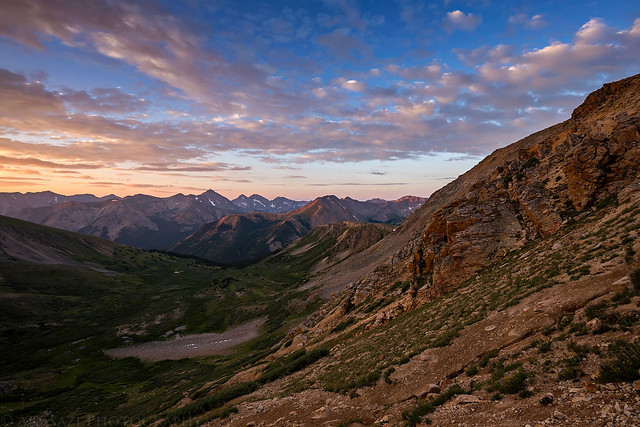 Almost to the saddle. 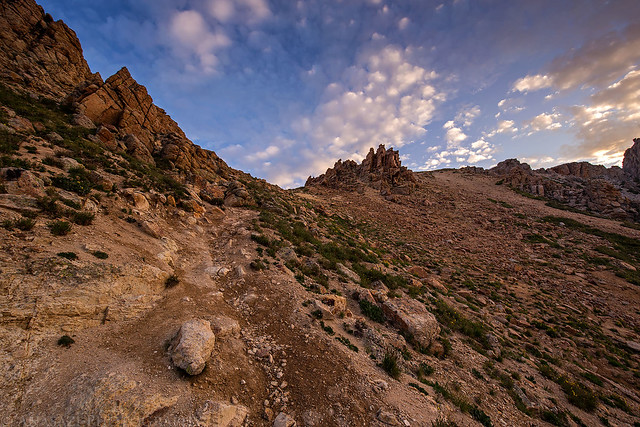 Once I was on top of the ridge I had even more great views of Sayres Peak and over the basin I had just climbed out of. 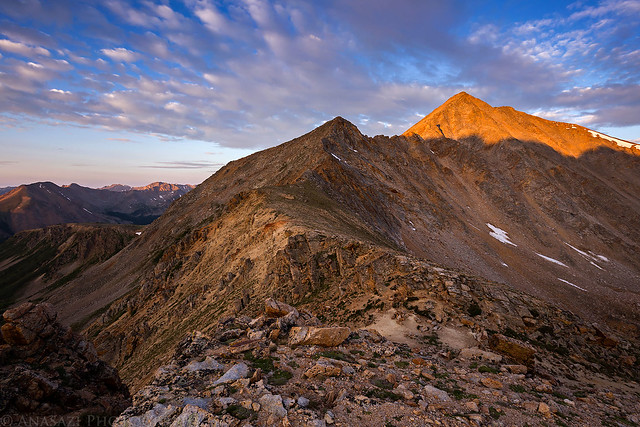 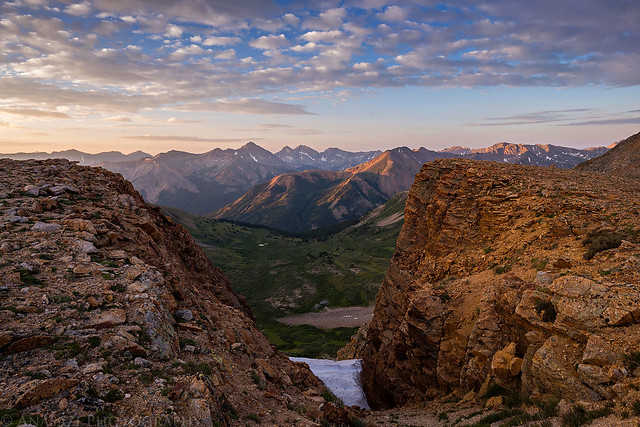 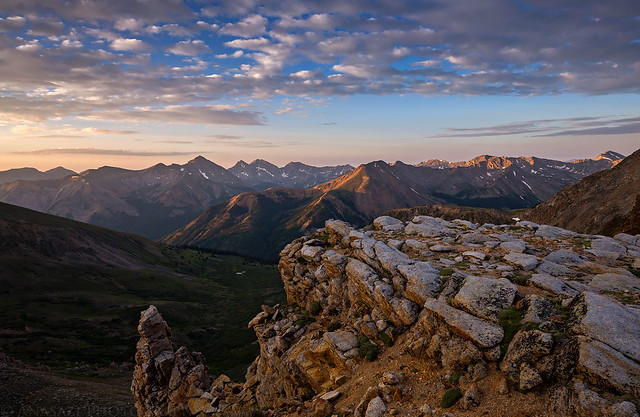 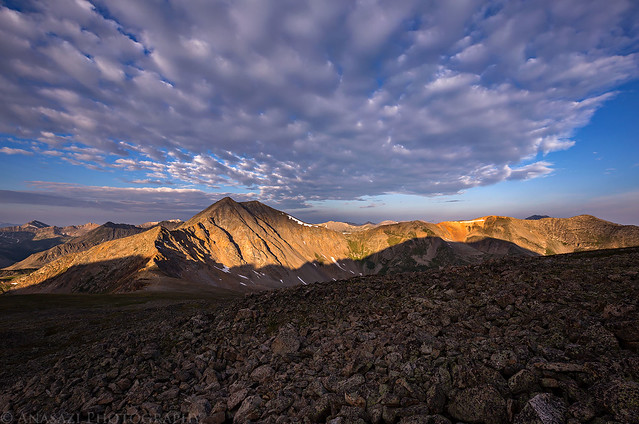 Next up was a steep 1,000 foot climb to the summit ridge. 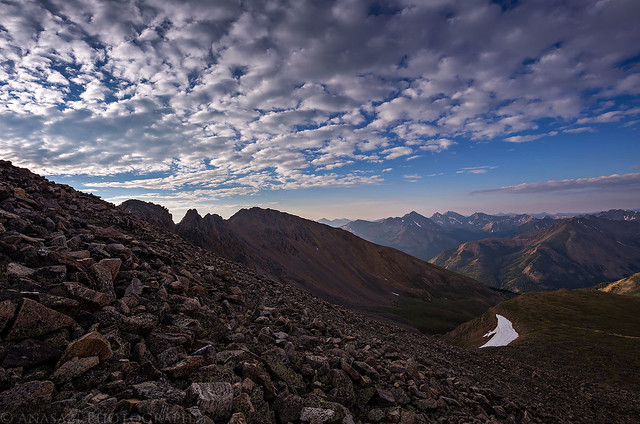 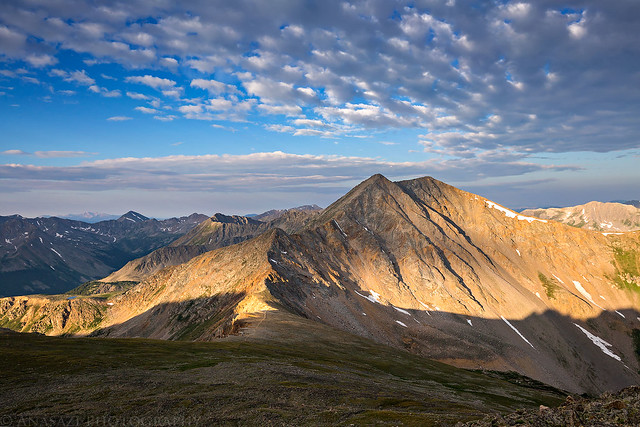 A view of the final ridge to the summit. 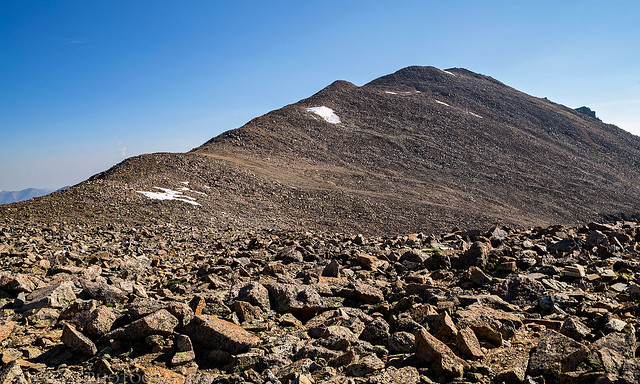 I made it to the summit shortly before 8:30am and had the place to myself for at least 10 minutes. By now the sky was full of smoke from distant wildfires and all the surrounding peaks looked very hazy. I enjoyed the views and took a few photos until another couple showed up from the standard route. I talked to them for a few minutes and took their photo before starting my hike back down. As I descended the steep and rocky slope I would pass about a dozen other people climbing up this part.

A view from the summit of La Plata Peak. 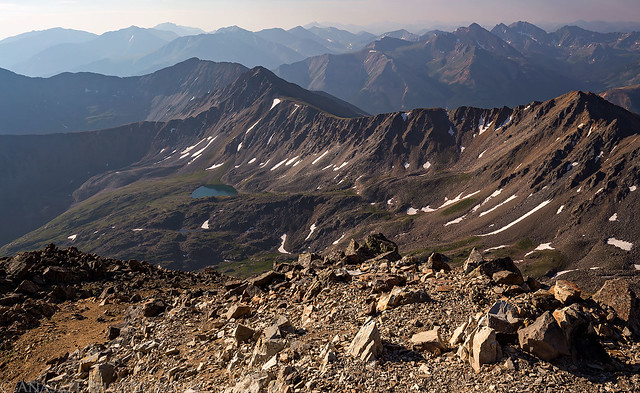 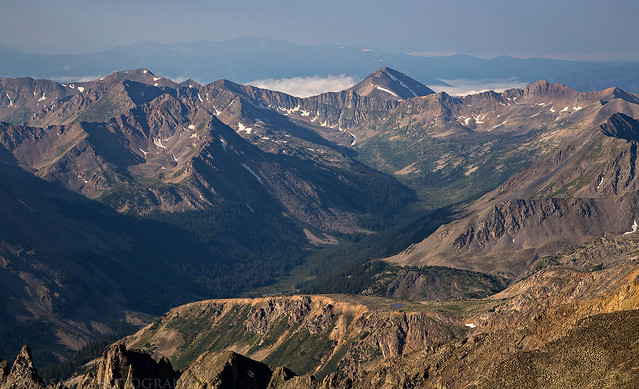 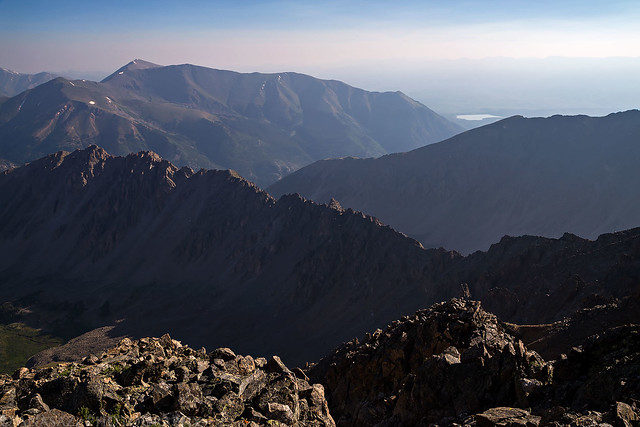 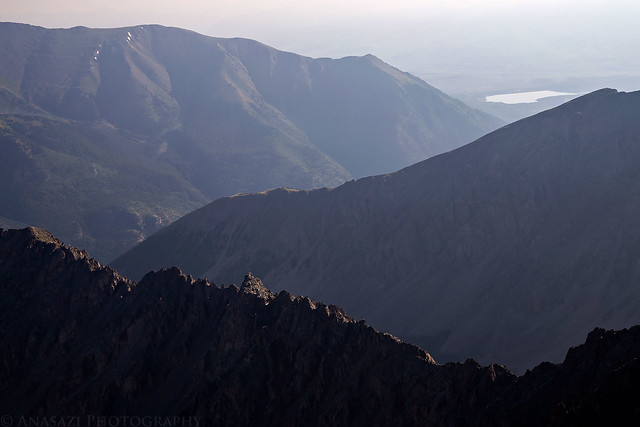 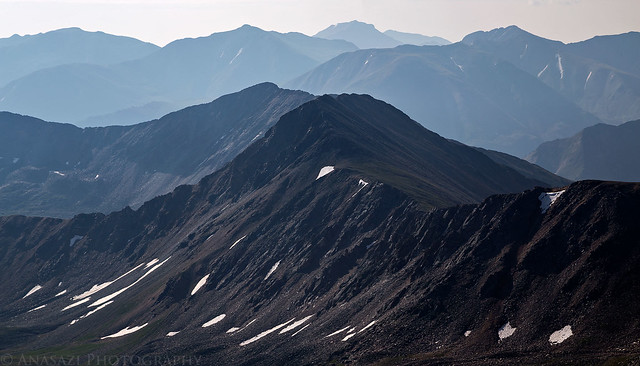 On my way back down I took a few minutes to check out an old mine. 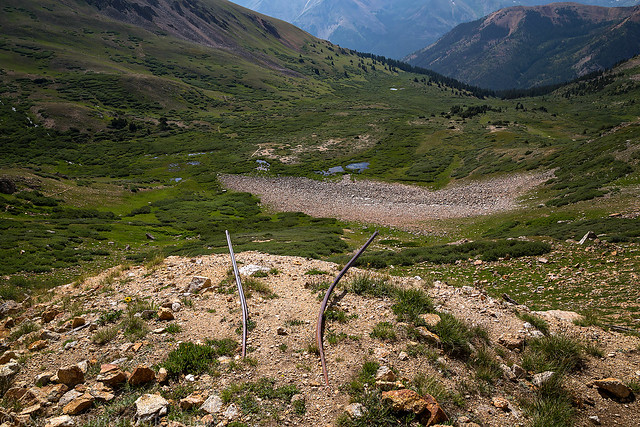 The mine shaft is disappearing under the loose scree coming down the mountainside. 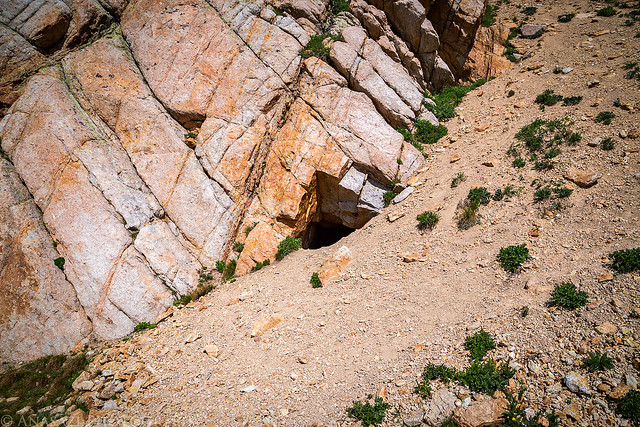 A view of the trail that I hiked up in the dark. 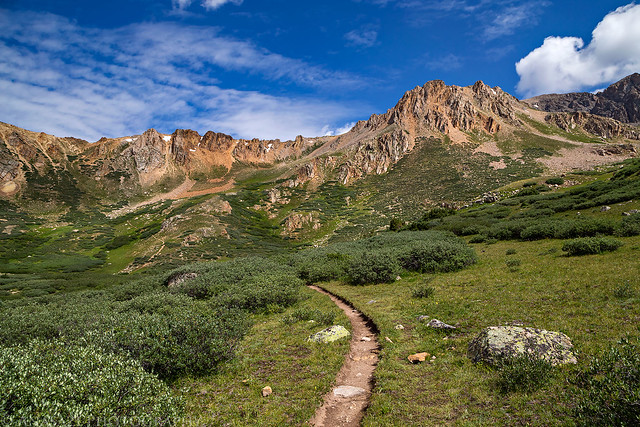 There was a pretty nice view up the North Fork of Clear Creek near the beginning of the trail. 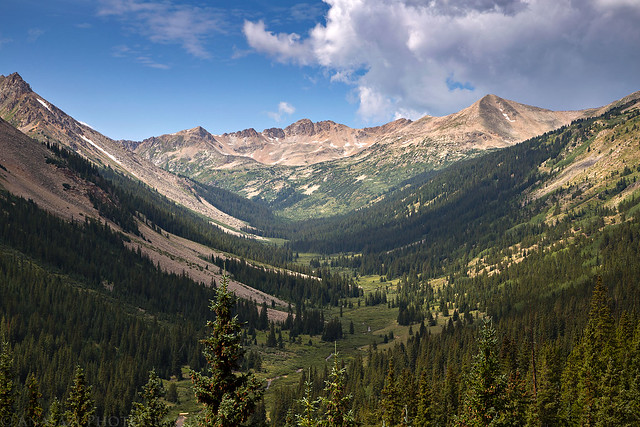 Just a photo of our campsite before we packed it up and headed back home. 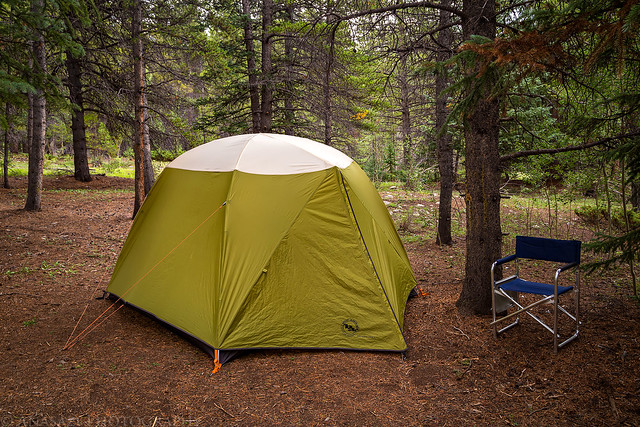