If you’ve been following along to this website for any amount of time, you probably already know that I enjoy spending my free time searching for ancient ruins and rock art hidden throughout the Colorado Plateau and beyond. This year I’ve decided to create a separate post that highlights my favorite photos of ruins and rock art from the past year. The year 2018 was an excellent year for me getting outside and exploring and I managed to visit a lot of locations that I’ve wanted to get to for a long time and found a lot of cool sites during my journey!

If you are interested in seeing my favorite landscape and nature photos from 2018, those can be found here: My Ten Favorite Photos of 2018 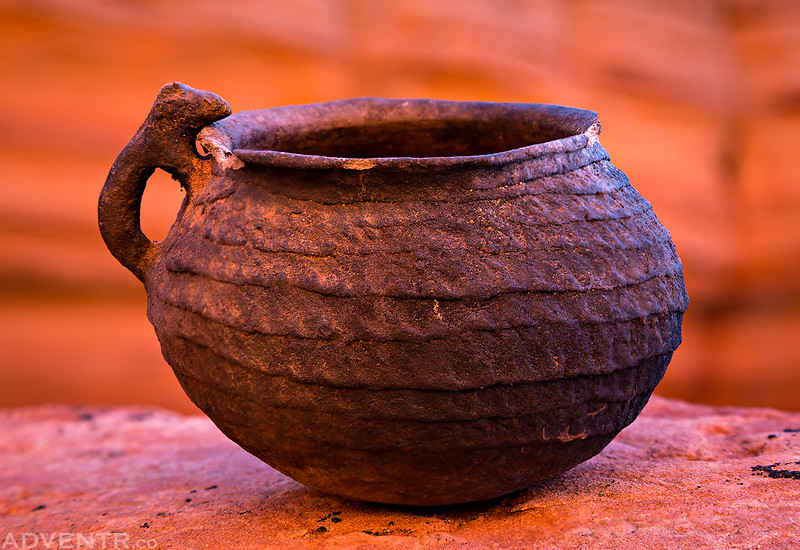 Obviously, the highlight of the year for me was discovering this ancient mug on the Arizona Strip. Since I found the mug in a popular area, it was reported to the BLM Archaeologist and was was safely recovered a few days later. The mug is supposed to be put on display at the BLM Visitor Center in St. George at some point, but it wasn’t there yet when I stopped by in November. While this may not technically be a photo of rock art or a ruin, I think this artifact fits well with the theme of this post. 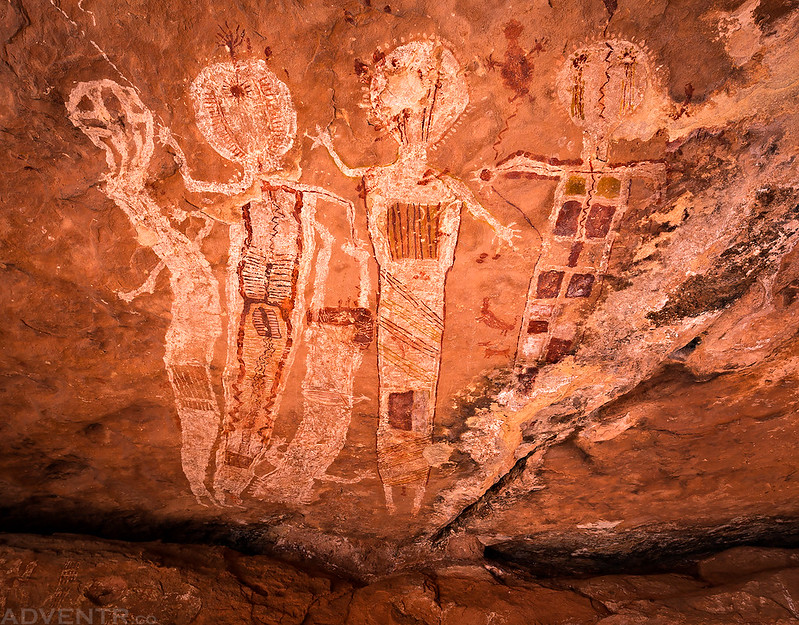 Over the past couple of years I’ve enjoyed hiking along the North Rim of the Grand Canyon in search of colorful archaic pictographs categorized as Grand Canyon Polychrome or Esplanade Style. This year I was finally able to visit the Hades Site and liked how the unusual figures appeared to be emerging from the back of the alcove in this scene. 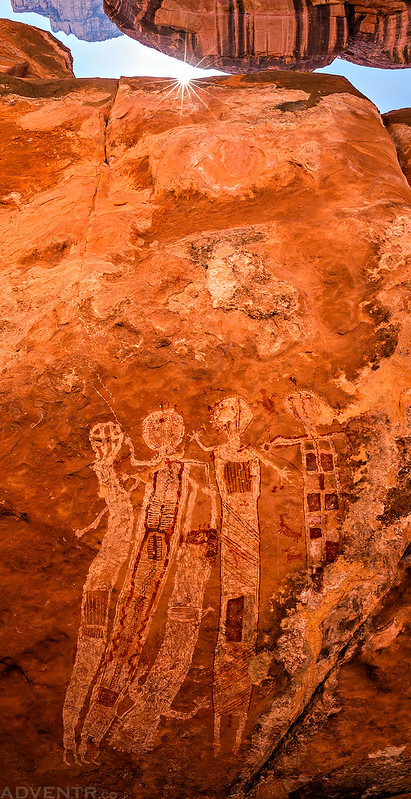 I usually try not to include more than one photo per site in these favorites lists, but I really liked this vertical panorama of the Hades Site alcove with a sunstar, so I decided to include it as well. This perspective also gives you a better overall view of the pictographs found here, including the figure that is upside down. The reflected light was a little more intense when I took this shot, too. 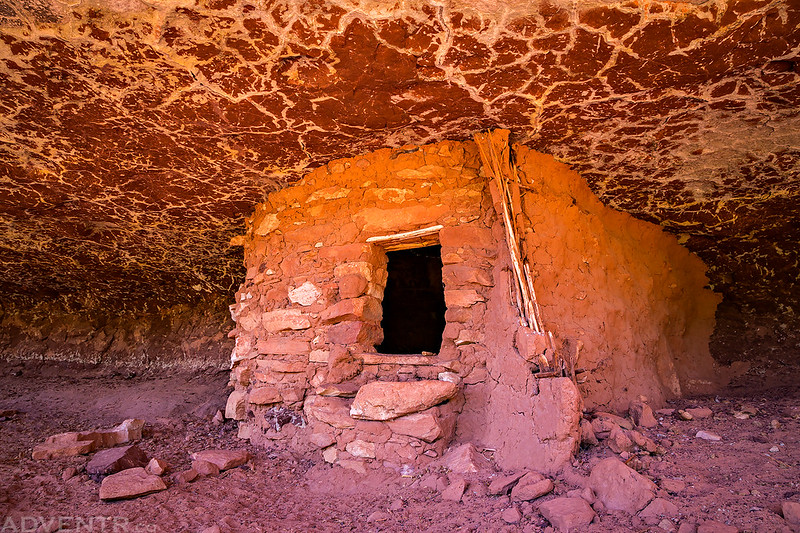 The color and texture of the ceiling of this alcove above this well-preserved granary in Bears Ears National Monument made for a very colorful and compelling scene. After backpacking through another section of Grand Gulch this spring, I can now say I’ve pretty much hiked the entire length of Grand Gulch from the highway to the north all the way to the San Juan River at the southern end.

Messages From The Past 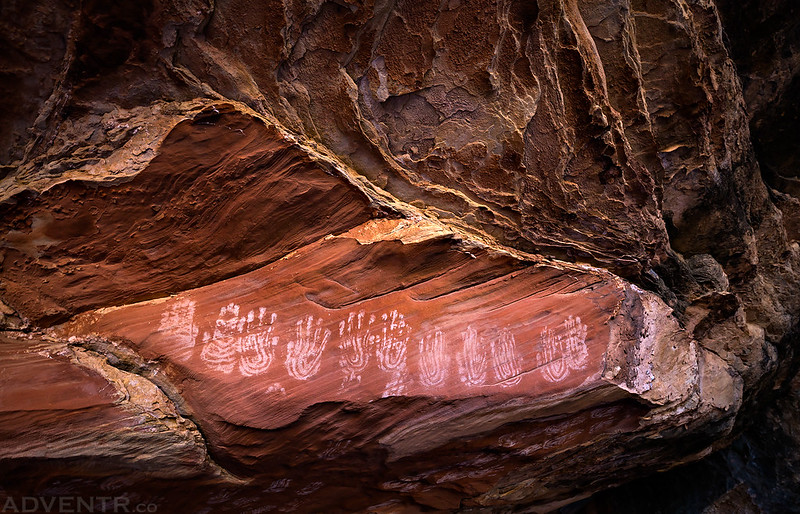 I’ve come across countless handprints during my travels throughout the Colorado Plateau, but when I entered this cave in Canyonlands National Park this line of white handprints really grabbed my attention.

Rooms at the End 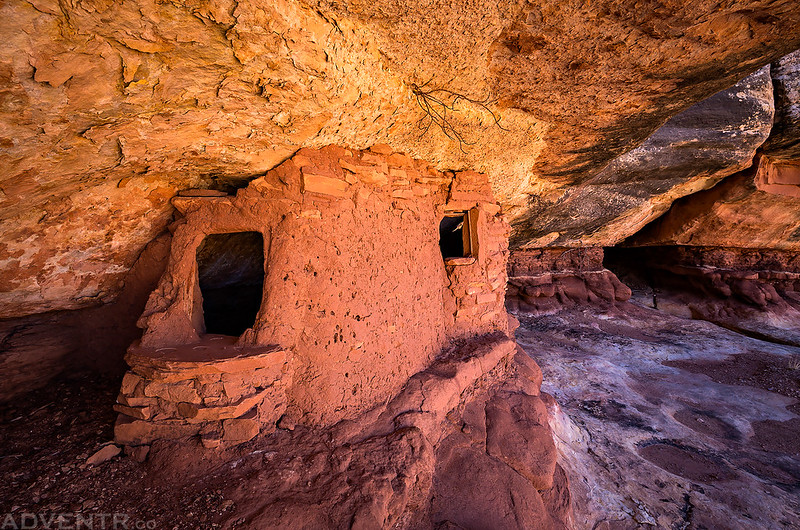 I was finally able to climb down to the Lewis Lodge Ruins this year, and I even made it all the way to these last two rooms at the very end of the long high ledge. I really liked the contrast between the warm tones near the ruins on the left and the cooler tones in the shadows to the right in this scene.

Sunburst Over The Stellar Panel 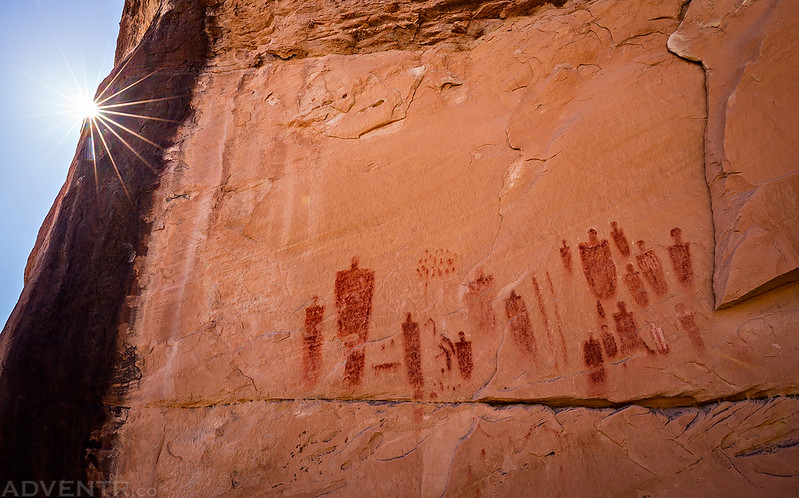 It’s not very often that I come across an awesome Barrier Canyon Style pictograph panel that I’d never seen or heard of before, but that’s what happened when I visited this panel in Canyonlands National Park early in the year. I happened to be there at the right time to catch a nice sunstar, too! 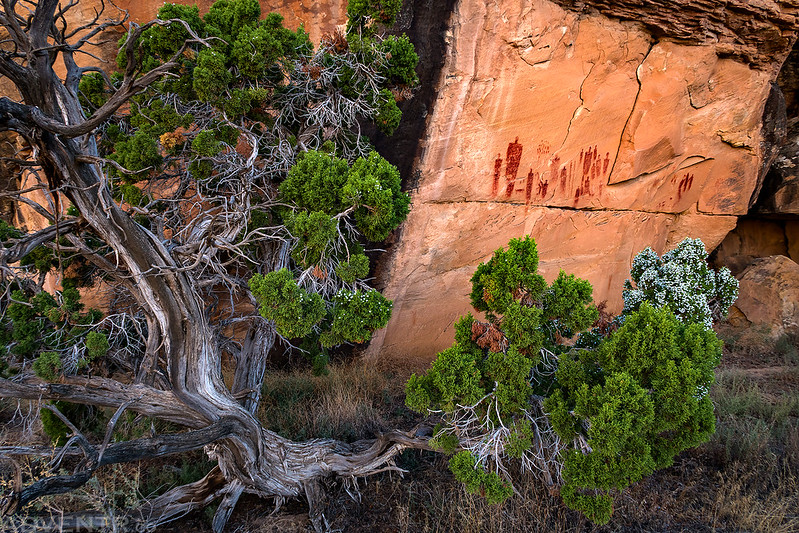 Later in the year I returned a second time to The Stellar Panel and took this photograph with the large juniper tree framing the site. The branch right in front of the panel was full of juniper berries, too! This photo was actually taken with a compact camera and not my usual DSLR, which I’ve started using more this year. This is the only photo in the list that was taken with the compact camera. 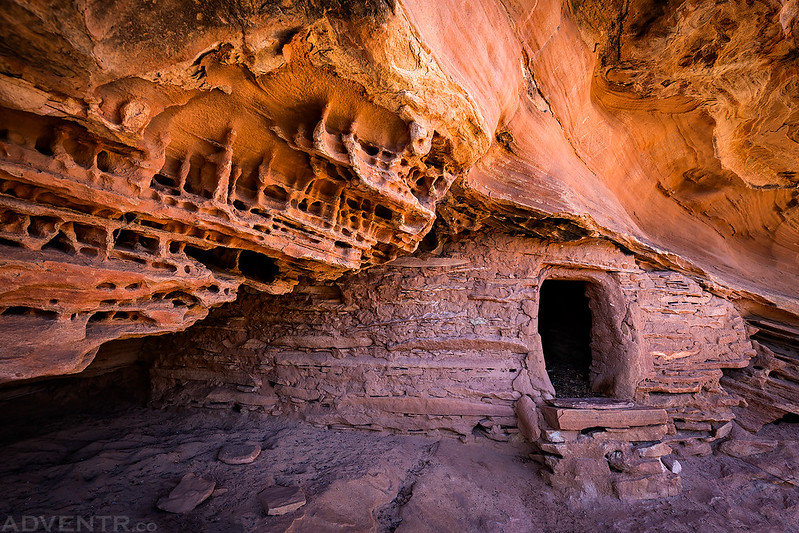 I’ve visited this particular ruin a couple of times over the years, but this was the first time I feel that I really captured a nice photograph showing off the lace rock (tafoni) to the left of the ruin. We had waited for a while at this ruin for just the right light, and I think it paid off. 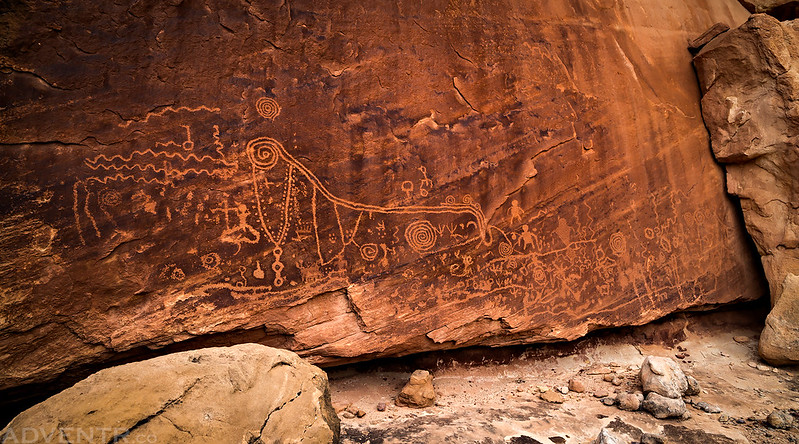 This photo doesn’t do a very good job showing off the true scale of this amazing petroglyph panel, but let me tell you, it’s large! It’s actually surprising that we missed it as we hiked up this canyon in search of it, but luckily we spotted the panel on the way back. 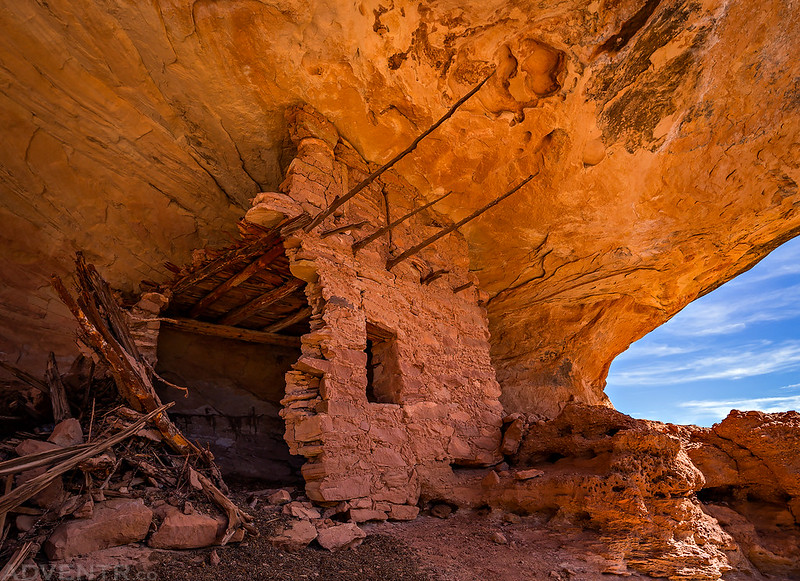 Even though the wall on the left side of this ruin has collapsed (or was torn open by pot-hunters), I really liked the interesting construction of the roof of this structure with the long poles protruding through the front of the ruin. While I’ve seen other ruins built like this, they are usually constructed of larger logs and not these smaller branches. 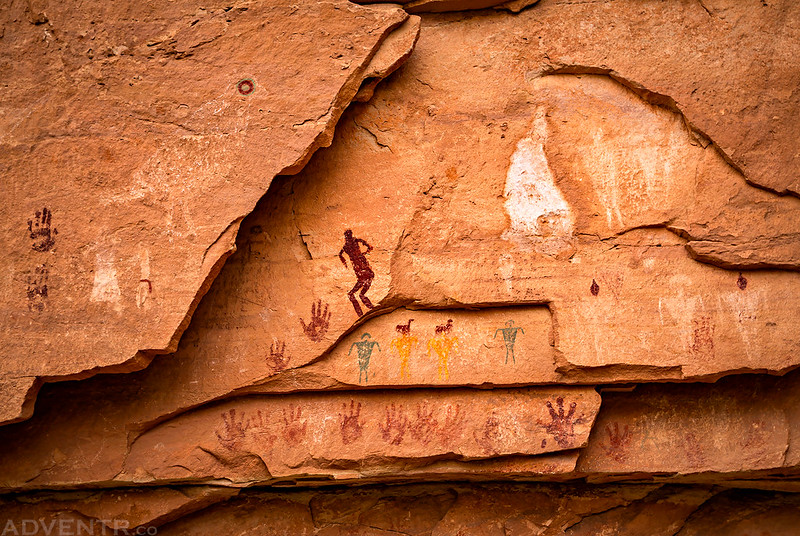 I have wanted to visit The Quail Panel for a long time and am happy that I was finally able to make it happen this year! This popular pictograph panel was just as amazing in person as I had hoped it would be! I can cross this one off the bucket list. 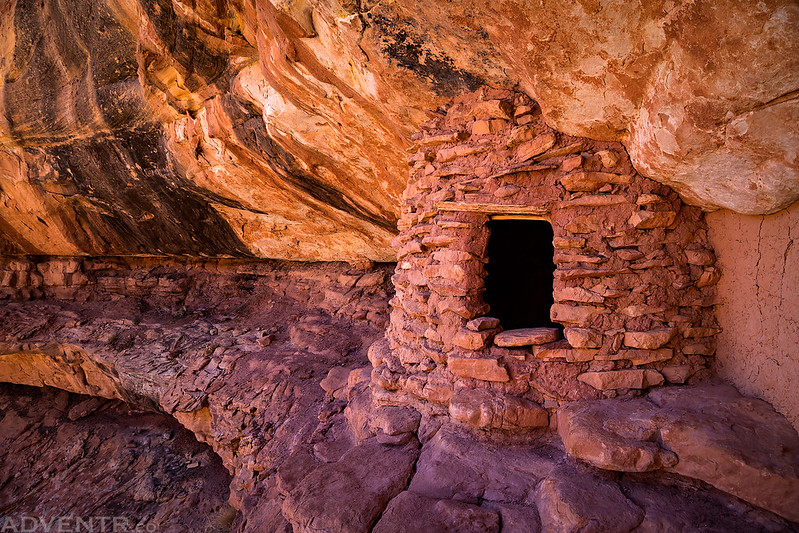 This well-preserved granary that was built on a narrow ledge within a large colorful alcove caught my eye as we backpacked through Grand Gulch this past spring. I’d actually hiked past this location a few times before and had missed it until now. 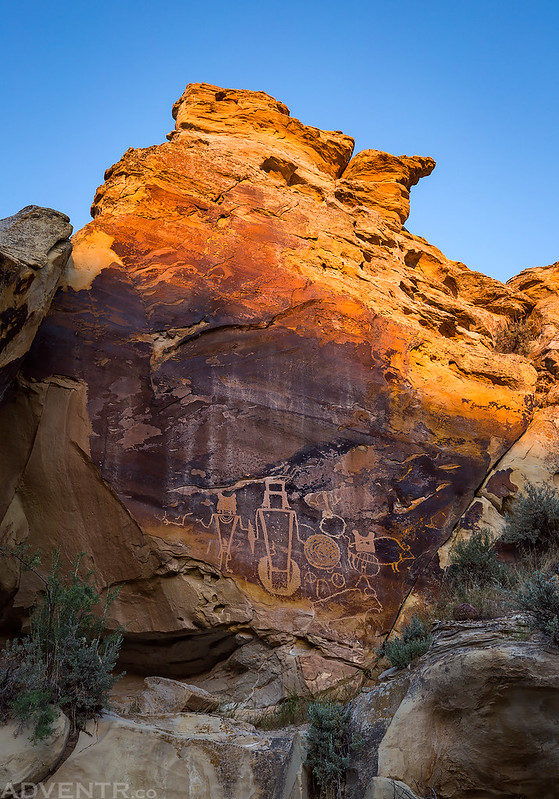 I’ve photographed this petroglyph panel in Dinosaur National Monument a few times before, but this evening I liked the transition of the shade at the bottom to the light at the top shortly before sunset. The sunlight was filtering through smoke from a nearby wildfire which gave the light a very warm and interesting color this evening. 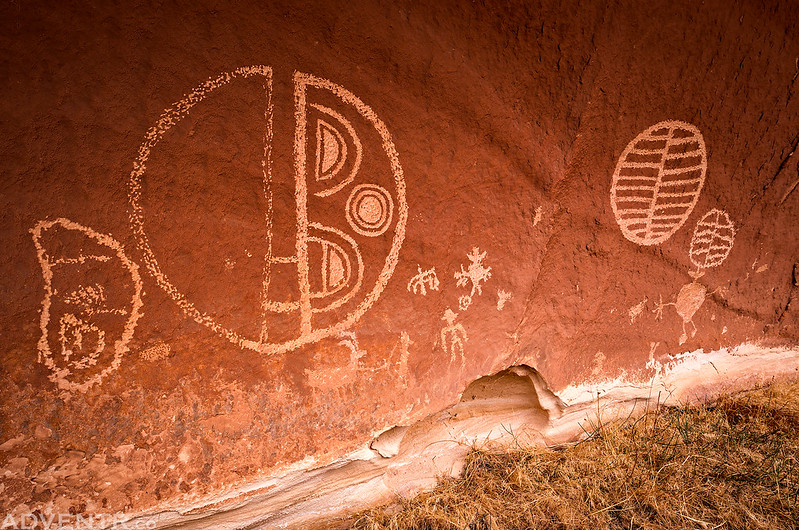 I didn’t have much information to go on when Diane and I set out in search of this petroglyph panel hidden in The Maze this past spring. We just had an old black and white photo with a possible canyon name. Needless to say, we were pretty excited when we actually found it! From the one photo I had seen, I assumed the petroglyphs were chalked and that’s why they were so white and vibrant, but I was happy to find that they were actually that vibrant in real life without any chalk.