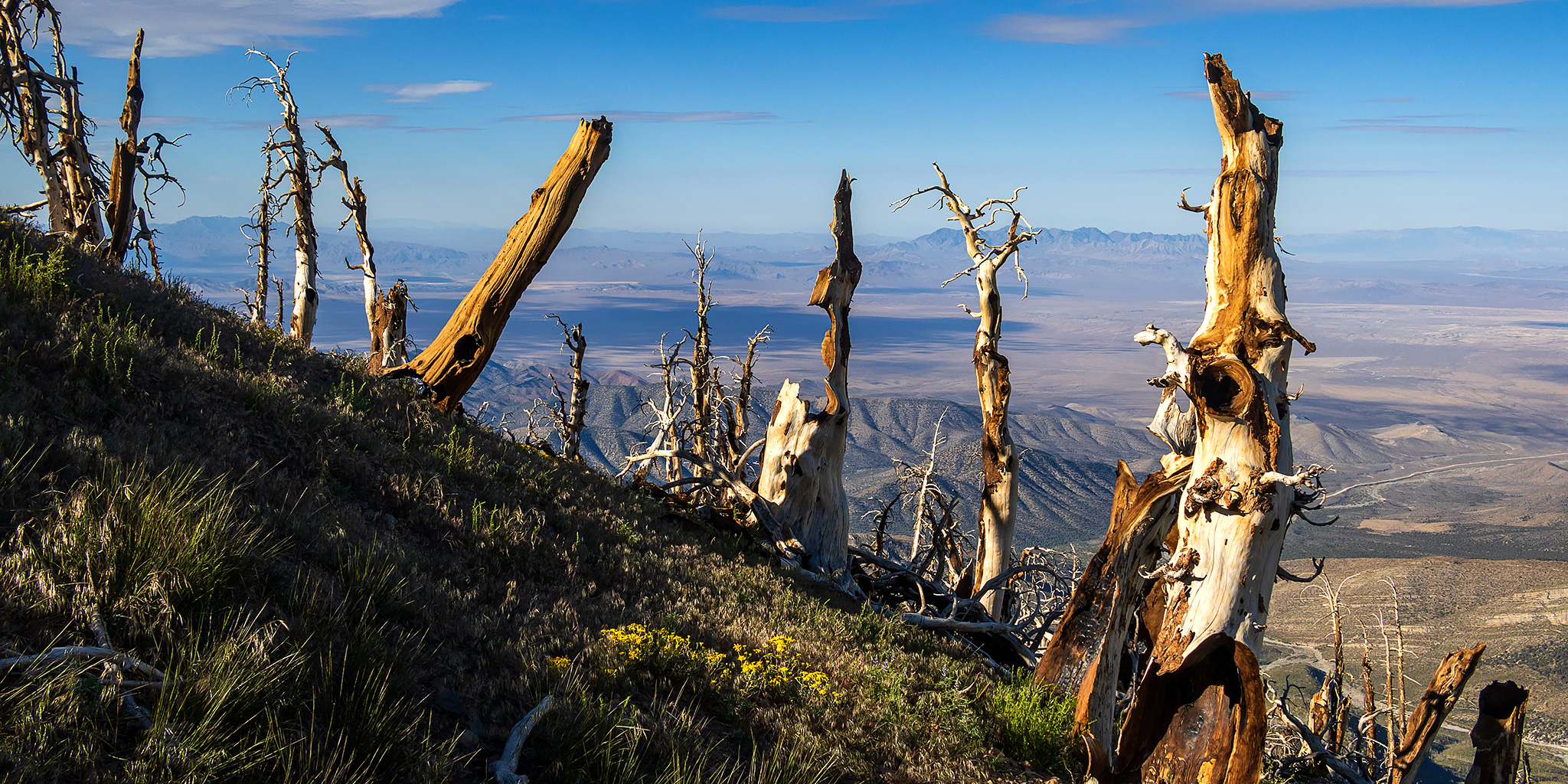 After spending Saturday morning hiking in the Tushar Mountains it was time to continue on the next leg of my journey to San Diego with a hike in the Spring Mountains just west of Las Vegas. I grabbed an early dinner in town and then drove up Kyle Canyon to the small mountain town of Mount Charleston to get a feel for the area and figure out the camping situation. I checked out the trailheads in the area so I knew where I’d be going early on Sunday morning in the dark and then drove further north on the Deer Creek Highway to hopefully find some dispersed camping since all the campgrounds near the trailhead were full, which was no surprise. Luckily, the first side road I headed down appeared to be a popular dispersed camping area and I found a nice site that was unoccupied. The campsite was located at about 7,600 feet and the temperature in the shade was very comfortable. I read a book and listened to podcasts for a while and then went to bed early so I could get an extra early start on Sunday morning. Unfortunately, since the area was obviously a popular camping area, there were a lot of loud people nearby late into the night, so I’m glad I had my earplugs with me…

A relaxing evening at my campsite in Lee Canyon. 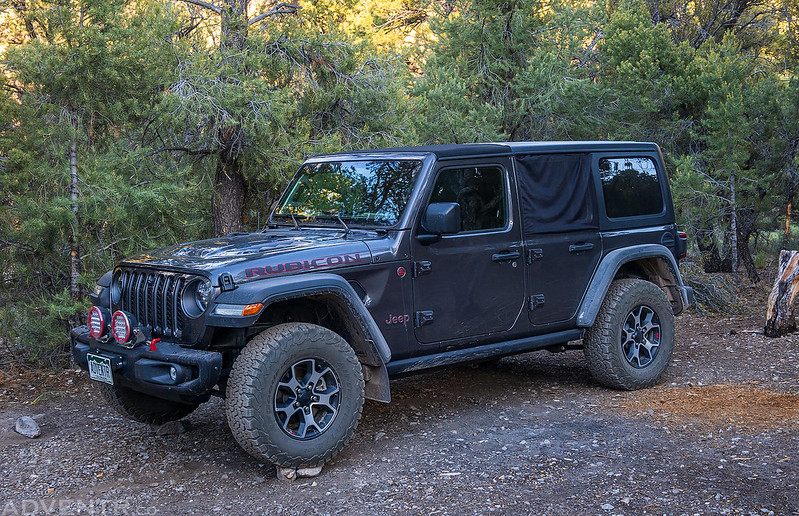 I woke up just before my alarm sounded at 4:00am on Sunday morning and headed over to the Cathedral Rock Trailhead. My original plan was to hike to the summit of Charleston Peak, which is the highest summit in the Spring Mountains at 11,915 feet, but with a long drive to San Diego ahead of me this afternoon and my recent slow hiking speeds, I decided that probably wouldn’t be a good idea for today, and instead I opted to hike to the summit of Griffith Peak which would be shorter by quite a few miles and with less elevation gain. I wanted to get an extra early start this morning because I thought the trail would be busy, being so close to Las Vegas, but I was surprised to find only two vehicles in the parking lot when I arrived. I started hiking about 45 minutes before sunrise.

Starting my hike up the South Loop Trail in the dark. 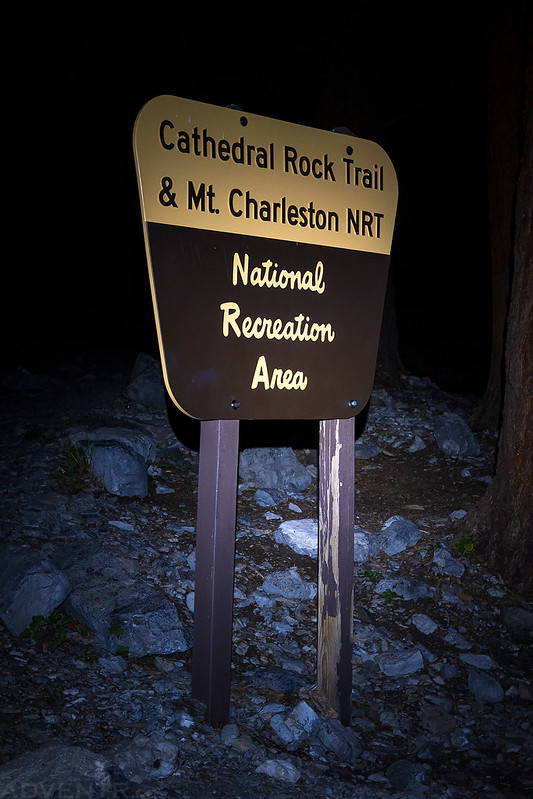 Just before reaching the first group of switchbacks the sun started to come up. 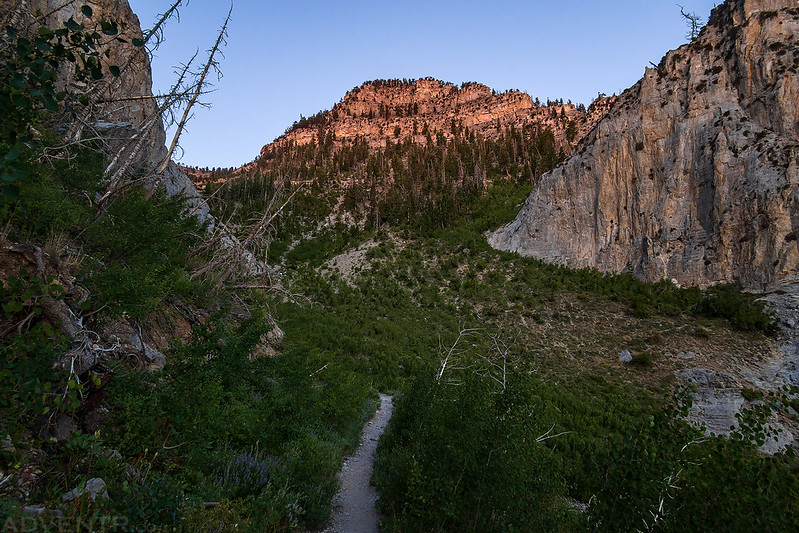 One of the many switchbacks on the trail. 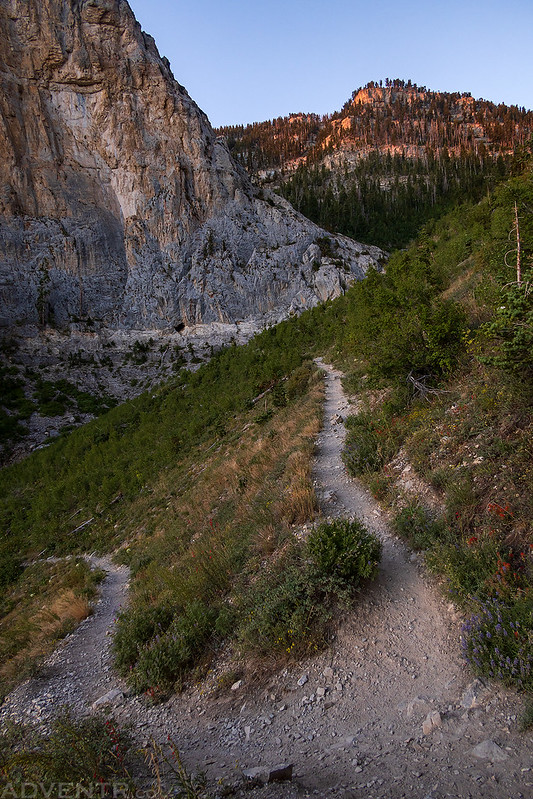 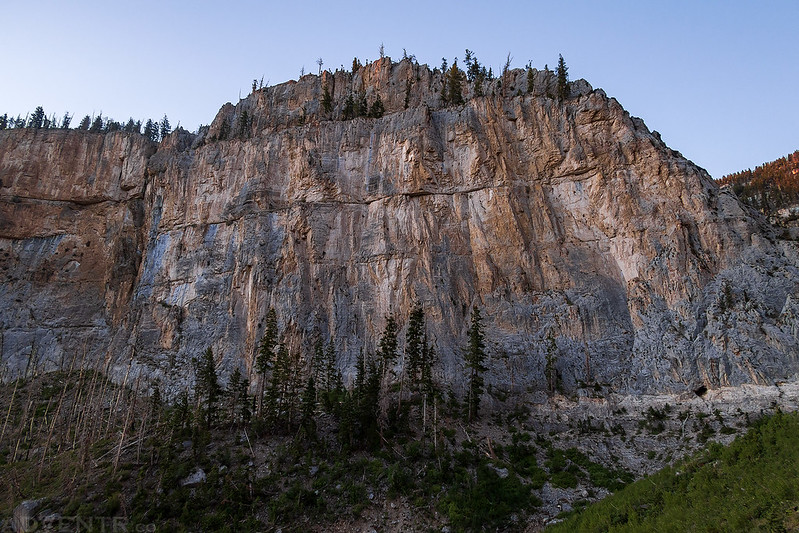 Orange light on the wall above me. 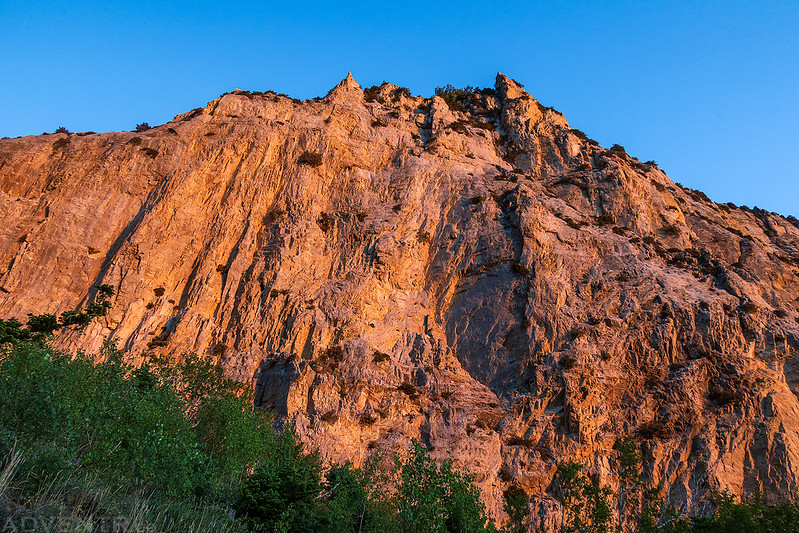 A morning view across Kyle Canyon to Fletcher Peak. 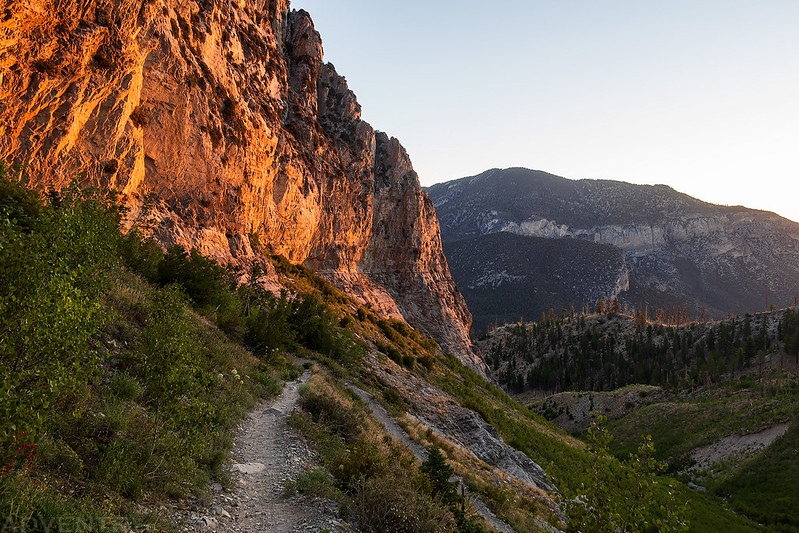 Light on the Cliff 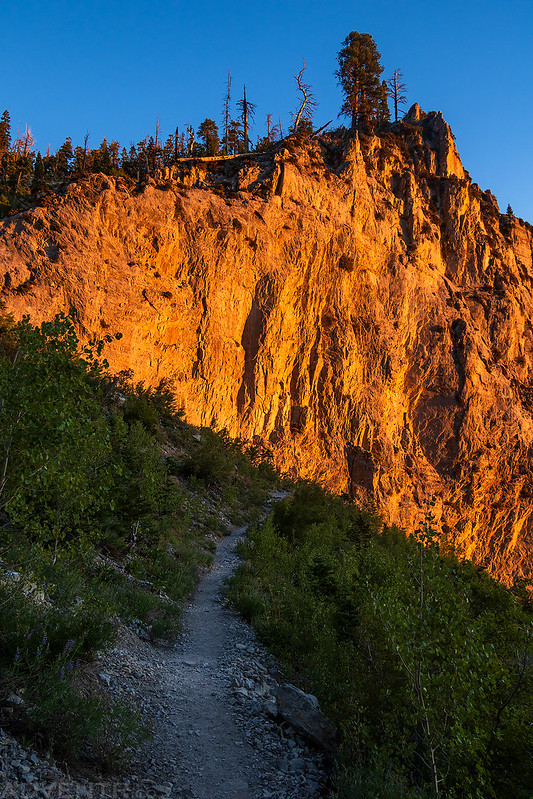 With plenty of smoke and haze in the air there was a colorful sunrise this morning. 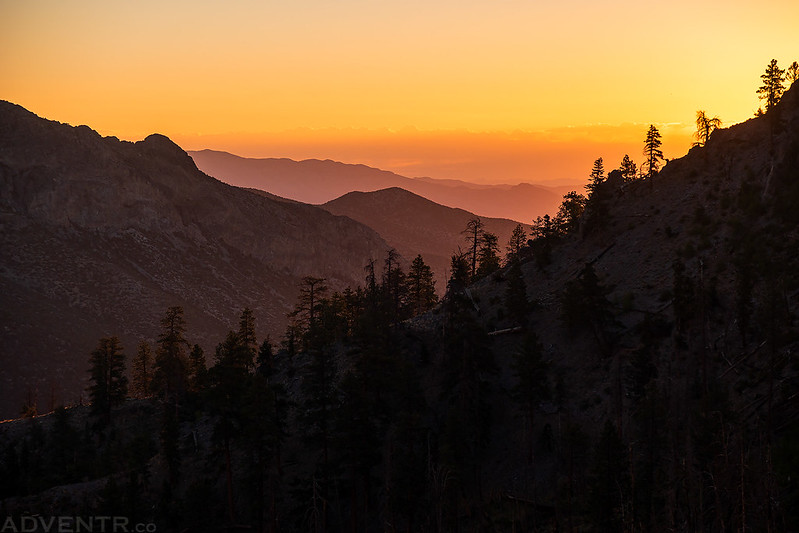 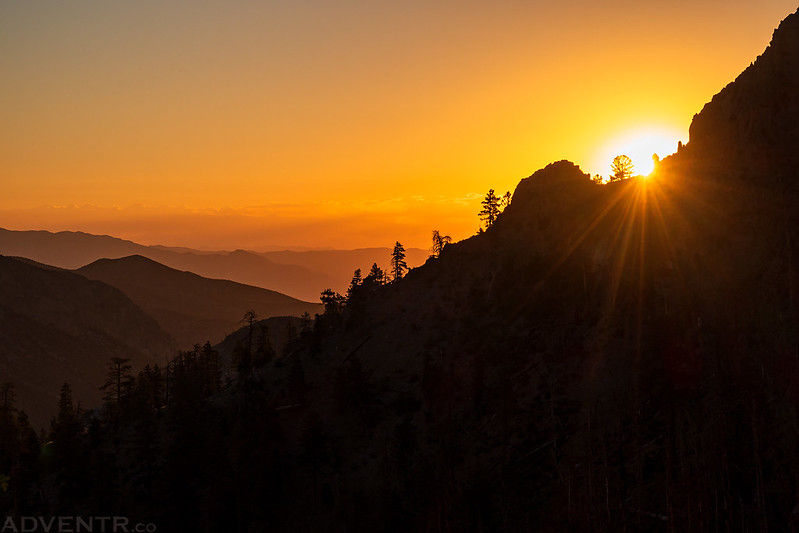 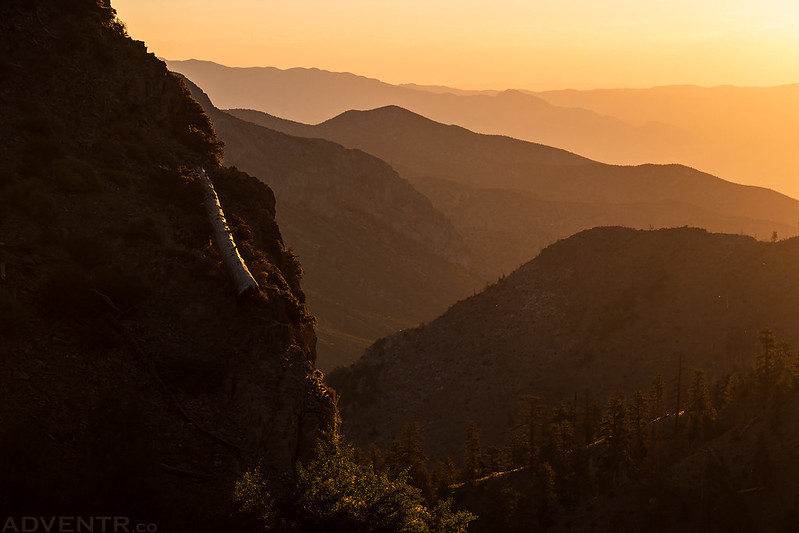 Welcome to the Mount Charleston Wilderness. 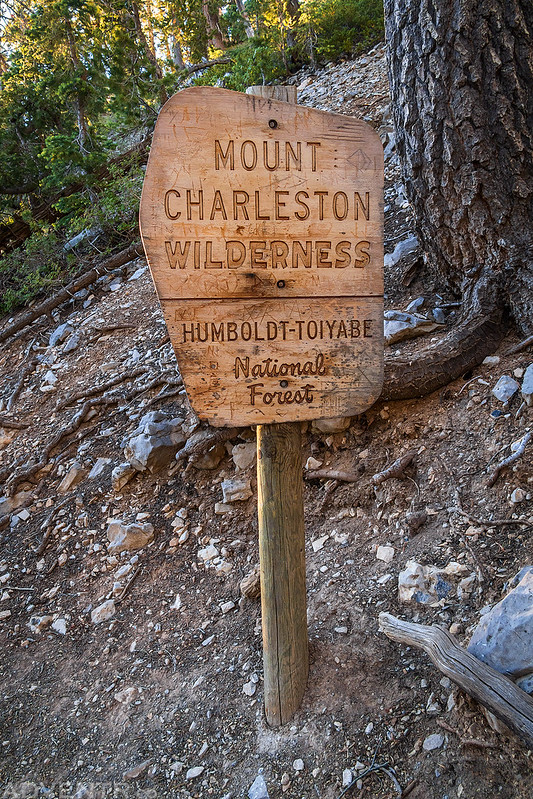 After climbing the first group of switchbacks, much of the trail is in the trees with limited views, but there was an overlook above Mazie Canyon and Cathedral Rock that offered a nice view of Cockscomb Ridge and Mummy Mountain. 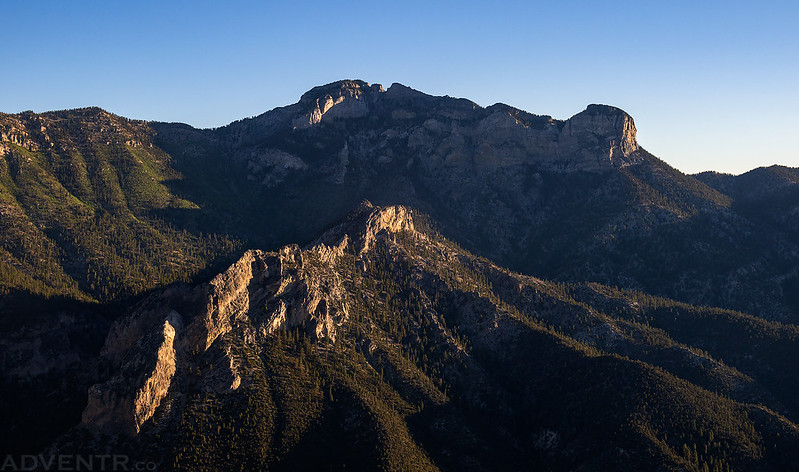 You could also see Charleston Peak from the overlook. 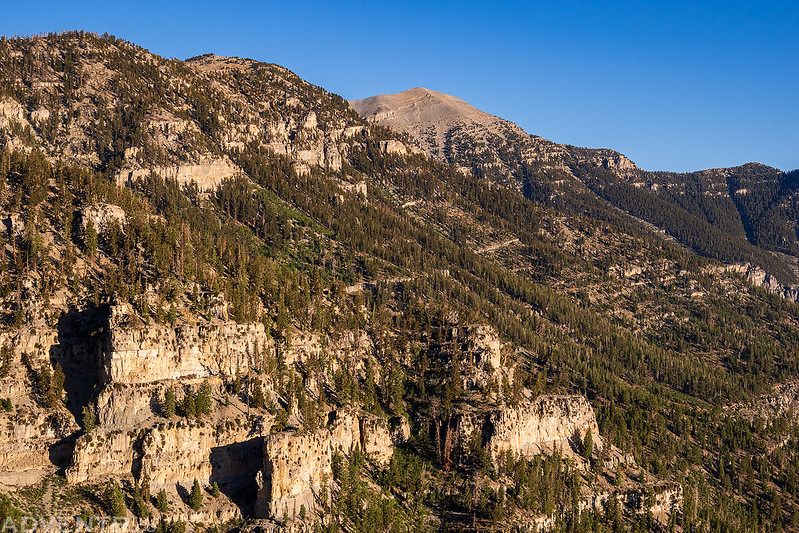 As the trail finally came out of the trees I got my first view of Griffith Peak (11,059). 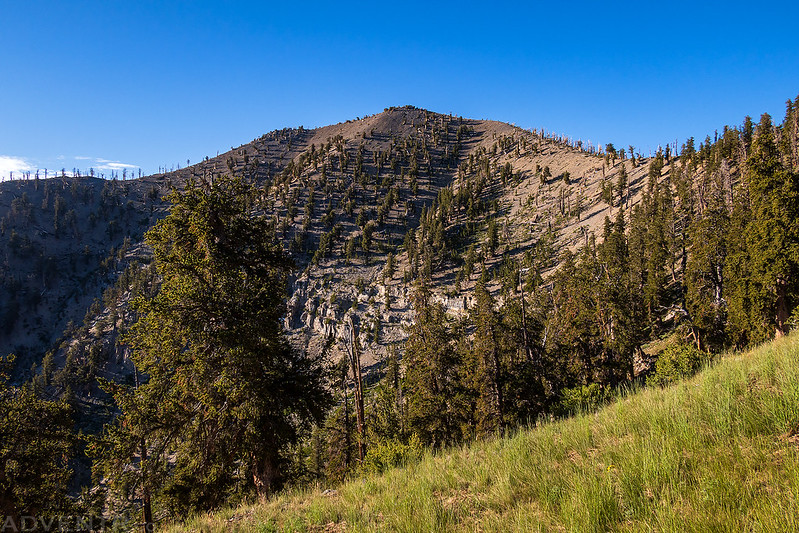 As I followed the trail to the saddle I entered the burn scar of the Carpenter 1 Fire that ravaged this area in 2013, as evidence by all the standing dead trees. 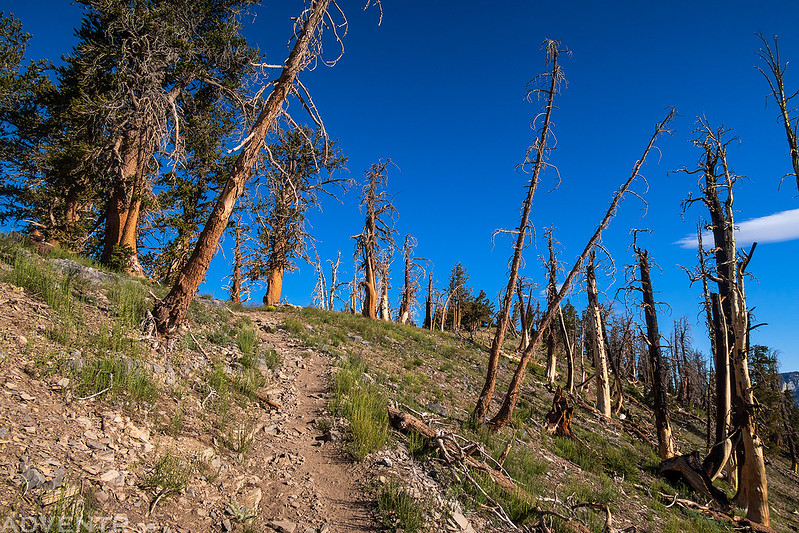 Following the Griffith Peak Trail on top of the ridge towards the summit. 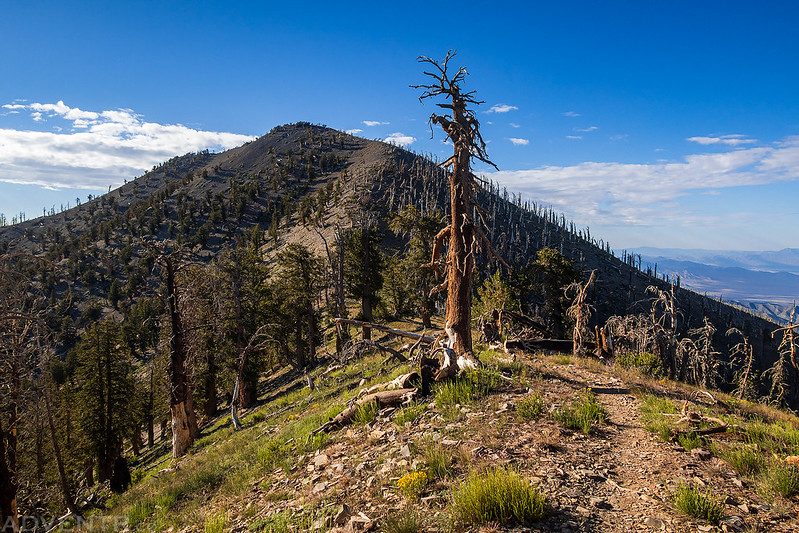 Through the Dead Forest 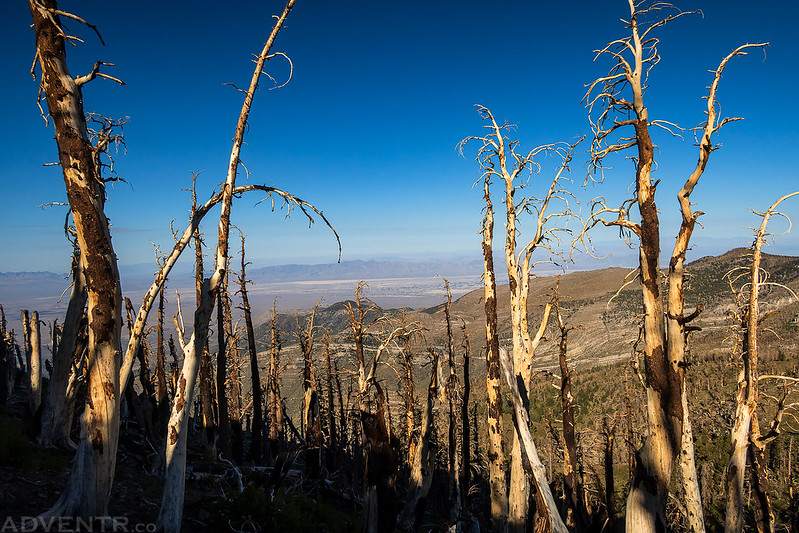 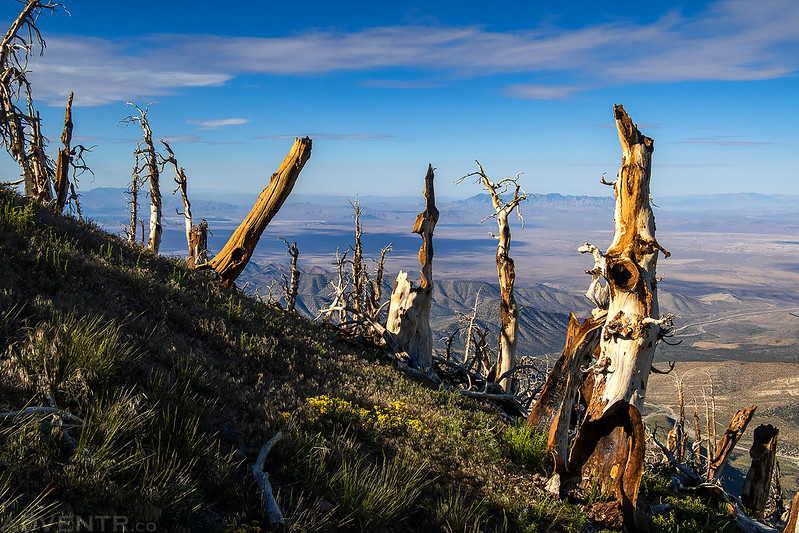 Here’s a view from the summit of Griffith Peak with Charleston Peak in the background. Surprisingly, I did not encounter any other hikers on my way up, but I would definitely end up passing quite a few on the way back down. 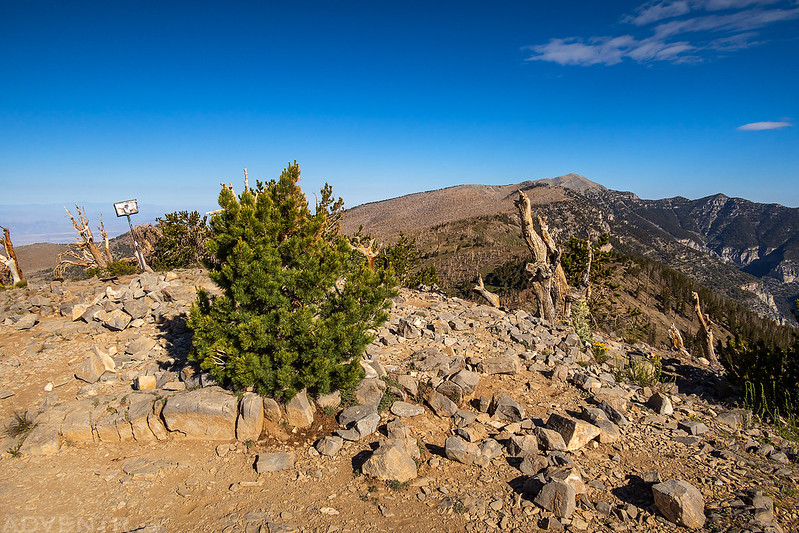 The view from the summit was pretty nice! If it hadn’t been so hazy and smoky, I could probably have seen Telescope Peak in Death Valley National Park to the west on the horizon. 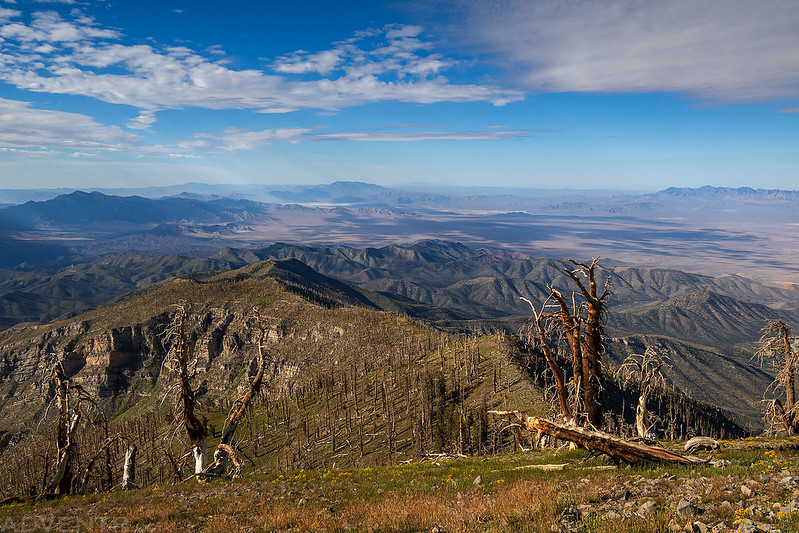 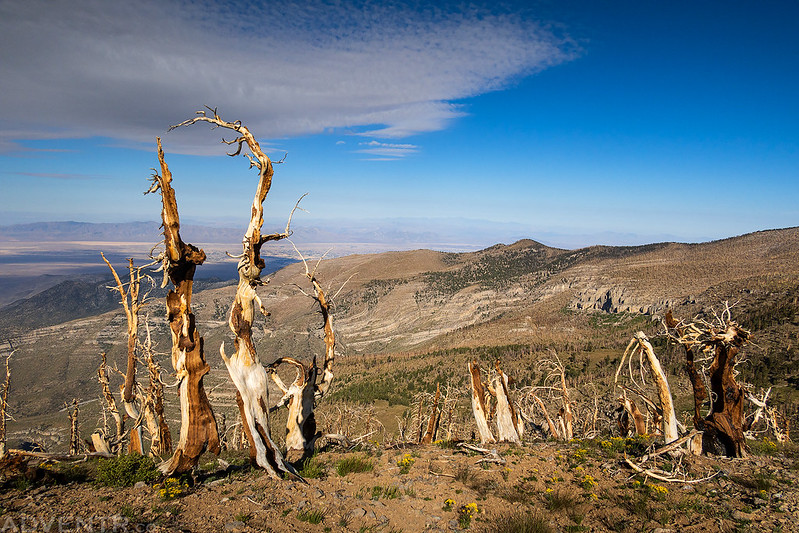 After enjoying the views from the summit for a bit, it was soon time to head back down since I had a six hour drive ahead of me. 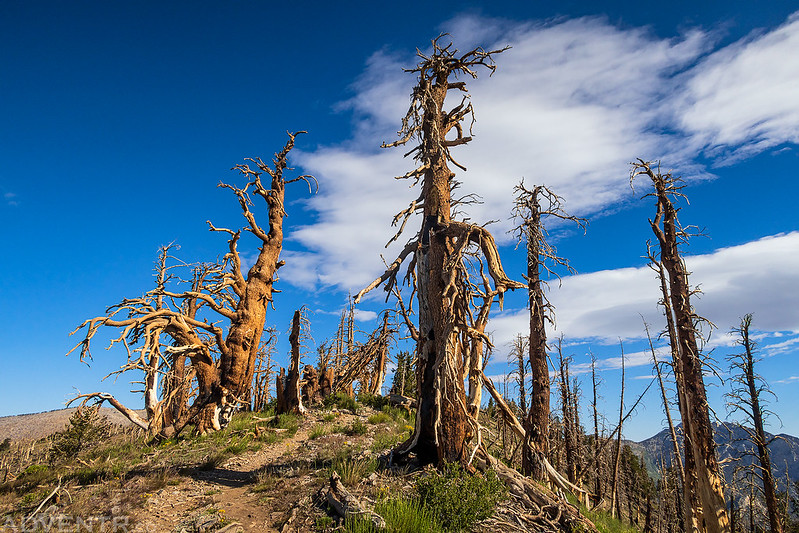 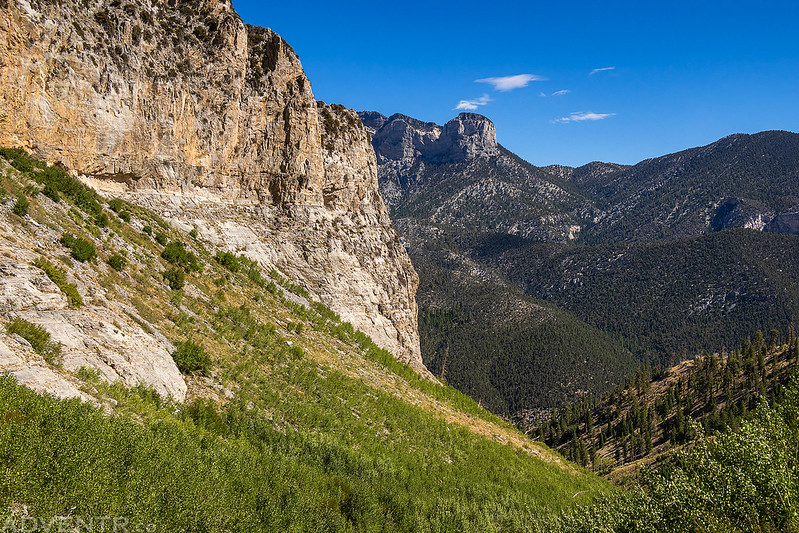 One last look at Charleston Peak. I will definitely have to return another time for that hike, probably from the North Loop Trail next time. 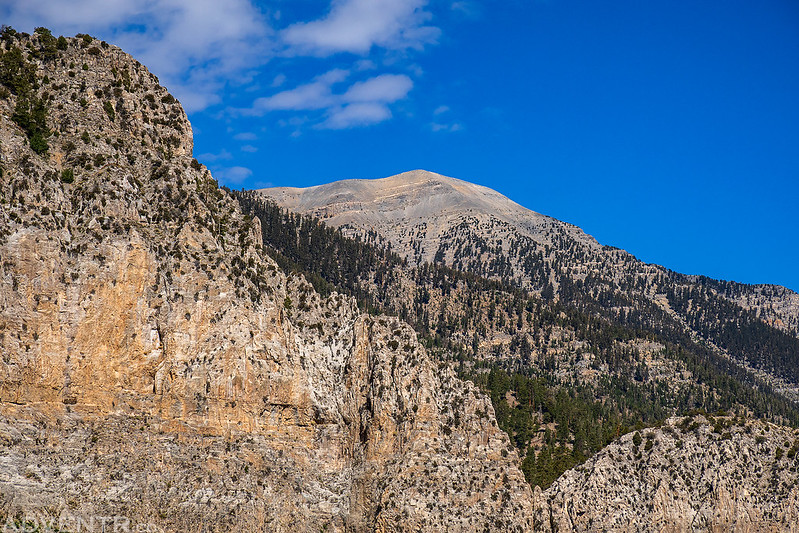 There were nice views of Echo Cliff on my way back down which I hadn’t seen earlier since it was dark out then. 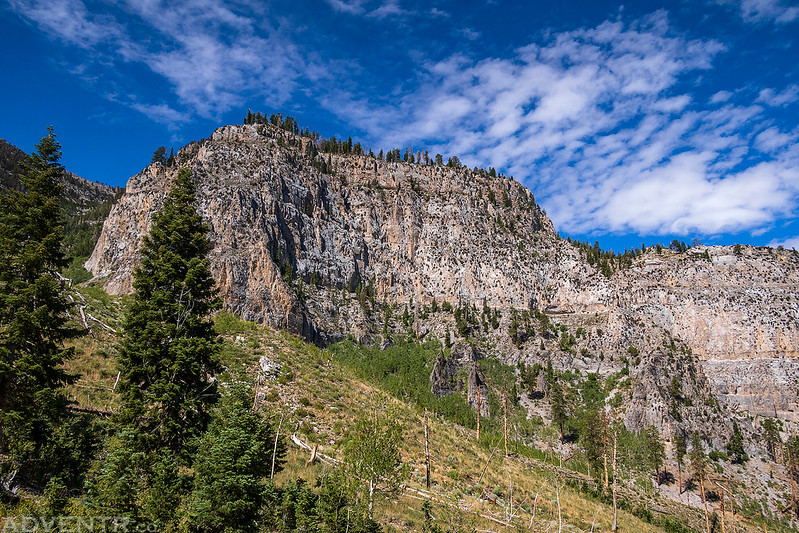 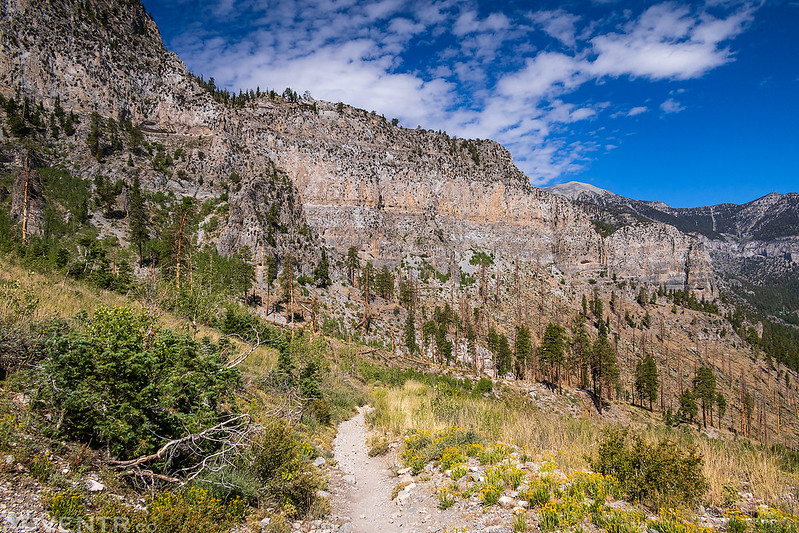 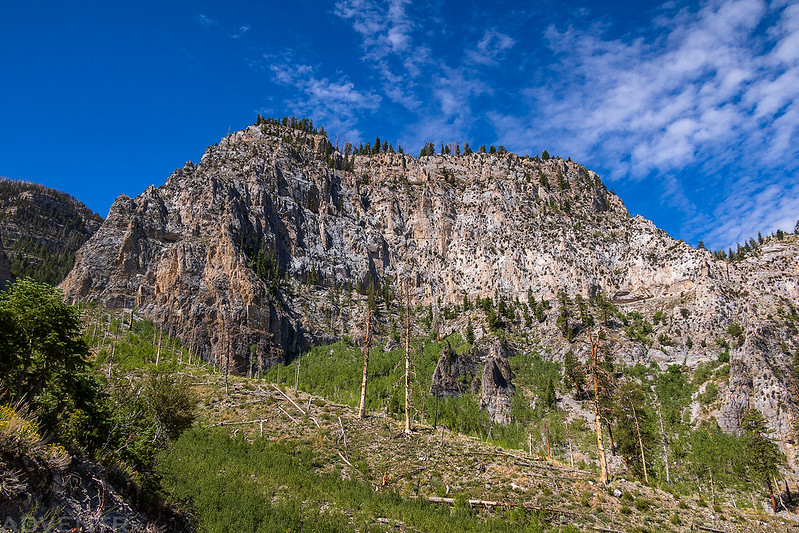 When I returned to the trailhead the parking lot situation was a different story since the lot was now full and people were all around. It made me glad I had gotten and extra early start this morning! I stopped in Las Vegas for an early lunch and then headed off to San Diego. Shortly after leaving Nevada I got off the interstate and took a scenic detour across the Mojave National Preserve to get away from traffic and eventually made it to my hotel shortly before 7:00pm in the evening.