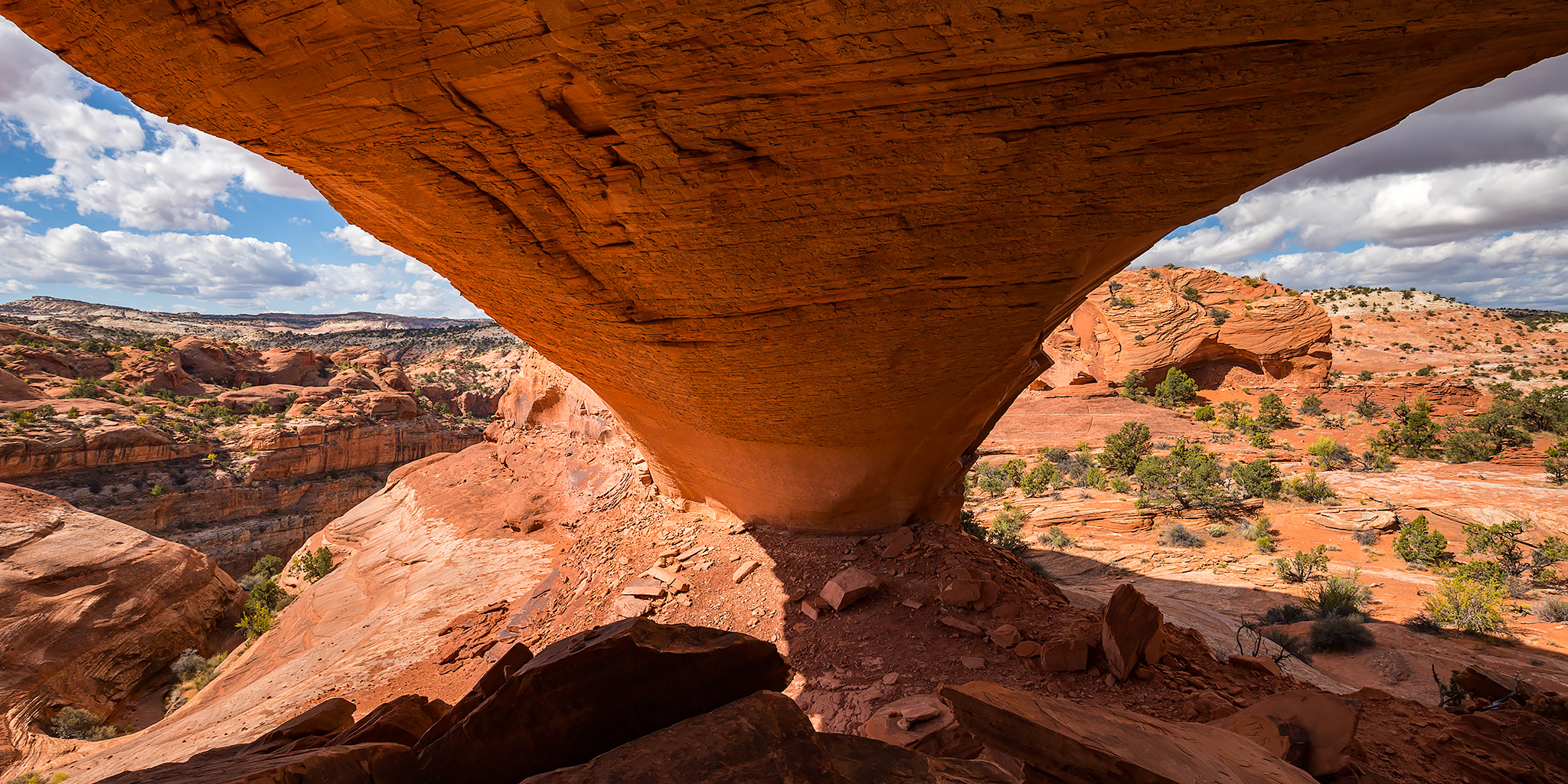 I left after work on Friday evening and planned to meet Jared at the Escalante River Trailhead located between Boulder and Escalante. As I was approaching Capitol Reef National Park from the east there were some nice clouds in the sky, so I pulled over for a quick photo before continuing on. I topped off my fuel tank in Torrey and then finished the drive to the trailhead. We must have planned the timing perfectly, because Jared arrived only about 15 minutes after me. He loaded his gear into my Jeep and we left his car there so we could hike back to it the next day. Then we went searching for a campsite along the Old Sheffield Road. Although there were a lot of people camped along here, we did managed to find a site off of a rougher spur road that ended at a large expanse of slickrock. It was a little bit tricky setting up camp on the sandstone since it was dark and pretty windy out, but we managed. There were flashes of lighting off in the distance all around us, but nothing that was close to us. I was in my sleeping bag by 10:30pm and since it was a New Moon there were tons of stars visible above. Even though it was windy for much of the night, which would become a common theme this week, I slept surprisingly well with the aid of a pair of earplugs!

Stopping for a quick photo along Highway 24 at sunset just before reaching Capitol Reef. 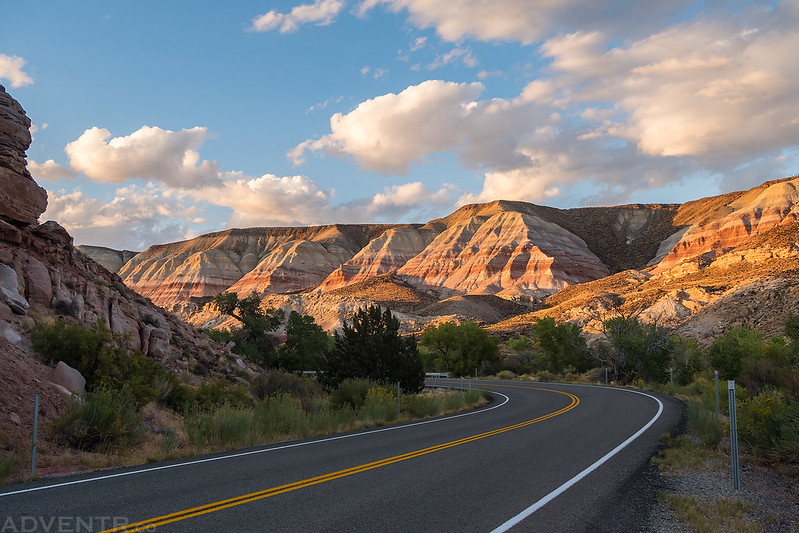 On Saturday morning we woke up before sunrise and were finally able to see the nice landscape that surrounded our campsite. We wandered around for a little bit with our cameras and watched the sun rise. Once we were done taking photos we packed up camp and headed over to the pullout at the start of our hike down into Phipps Wash.

The first view of our campsite in the light on Saturday morning. 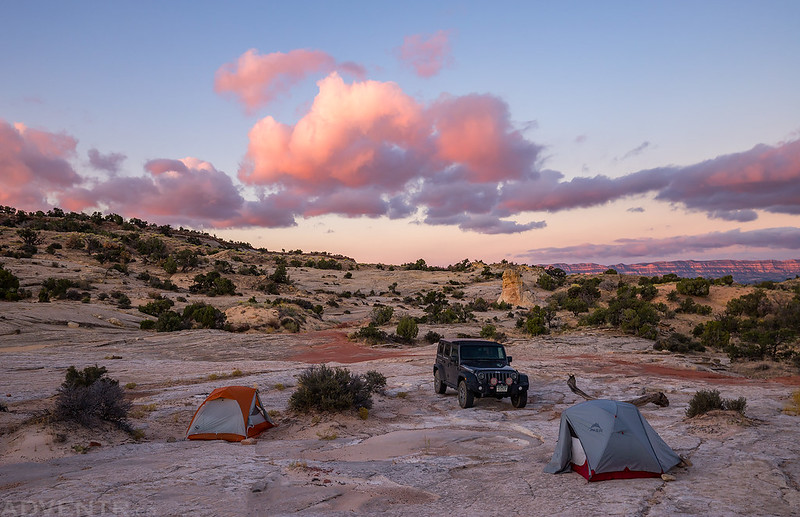 Our sunrise view from camp wasn’t too bad. 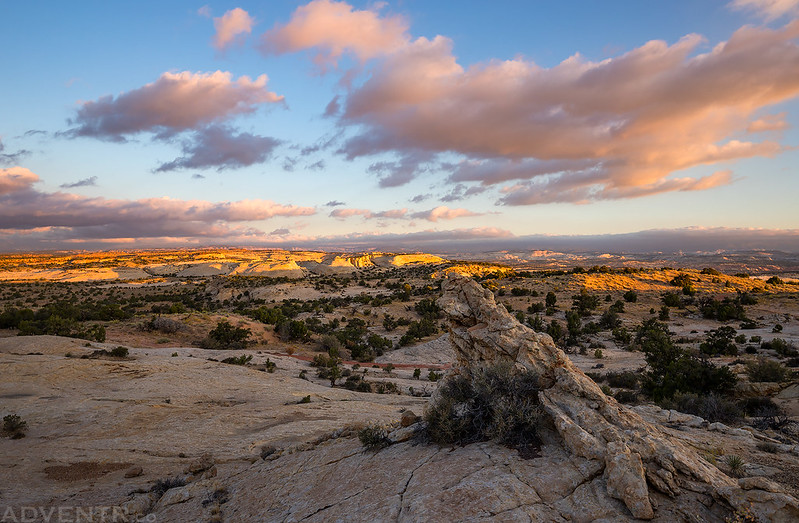 This was our expansive view near Old Sheffield Road as we started hiking down into Phipps Wash. 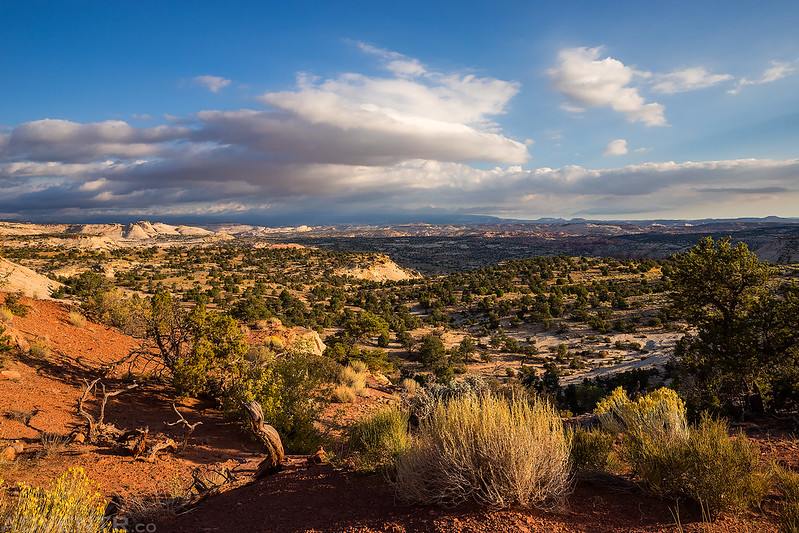 Descending the colorful sandstone into the canyon. 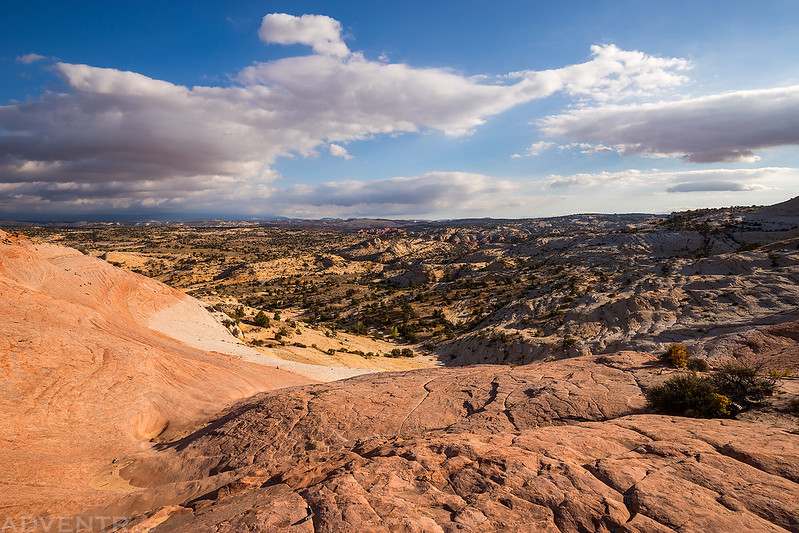 Once we reached the wash at the bottom of the canyon we were hiking through soft sand for much of the way. 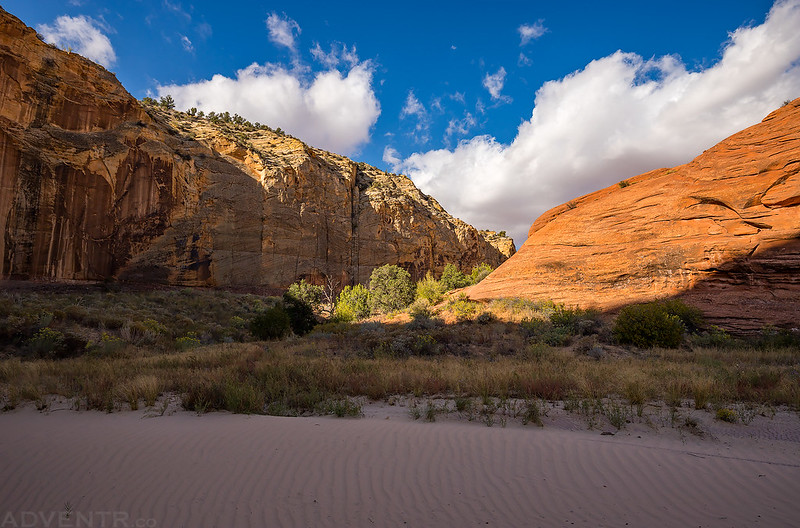 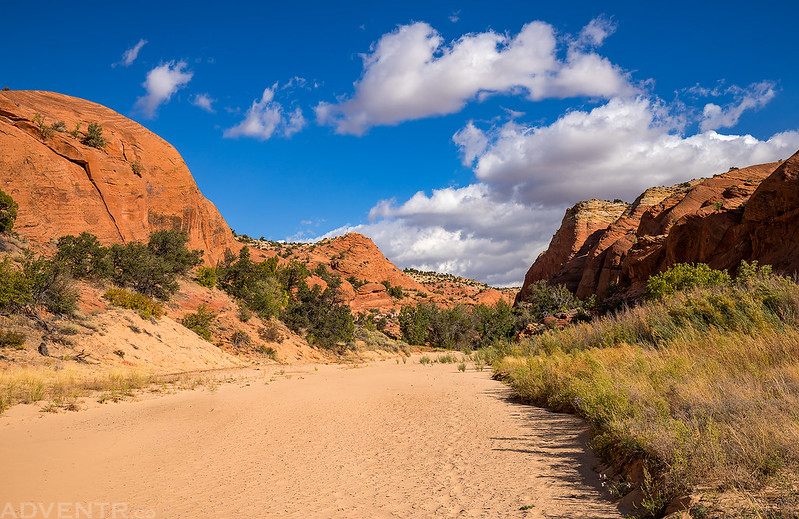 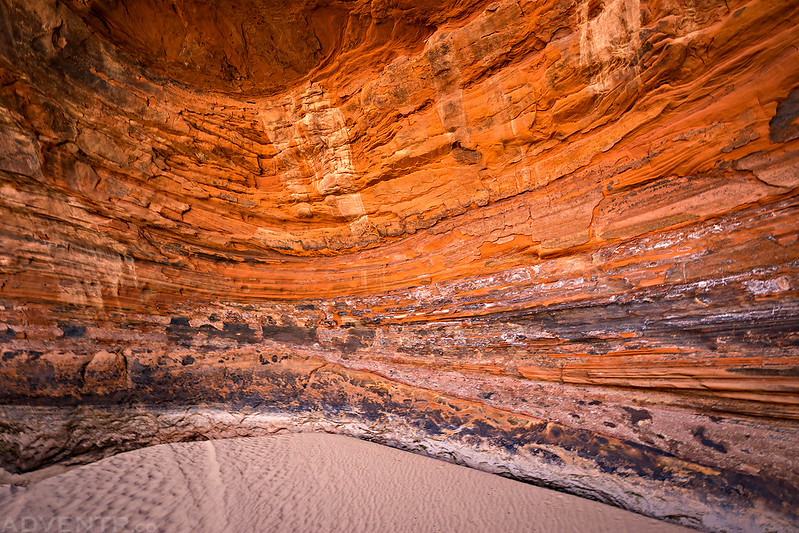 After hiking up a short side canyon and climbing out of the canyon we had our first view of the massive Phipps Arch. 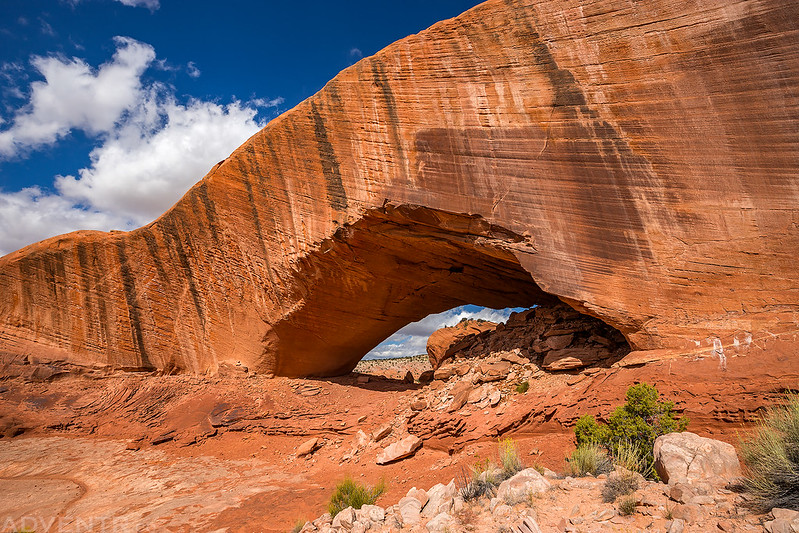 Hiking through the arch to the other side. 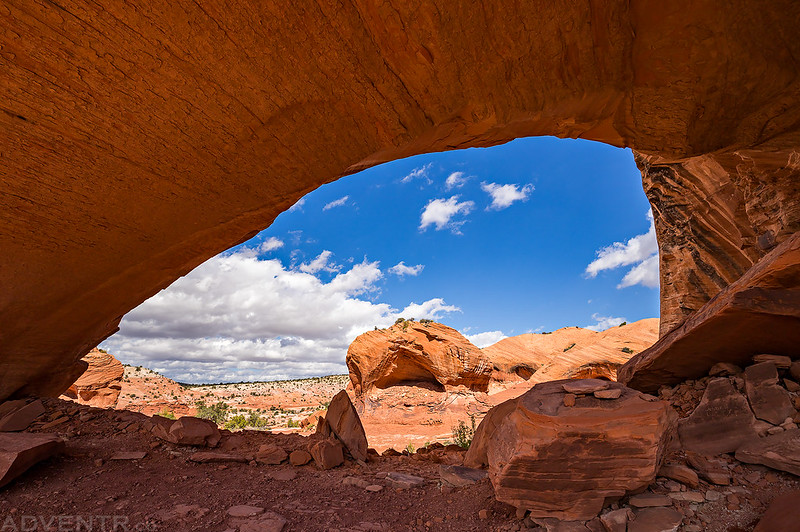 I caught a nice sunstar above Phipps Arch from this side. 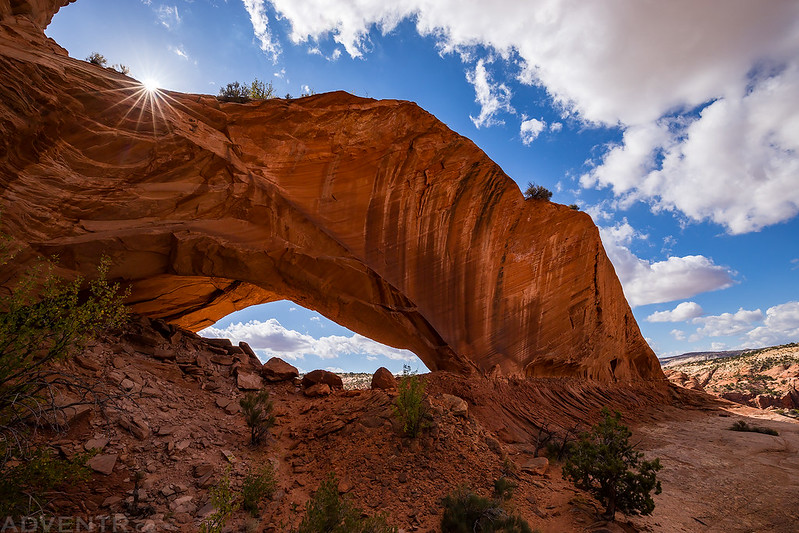 The views on the other side of the arch weren’t bad either. 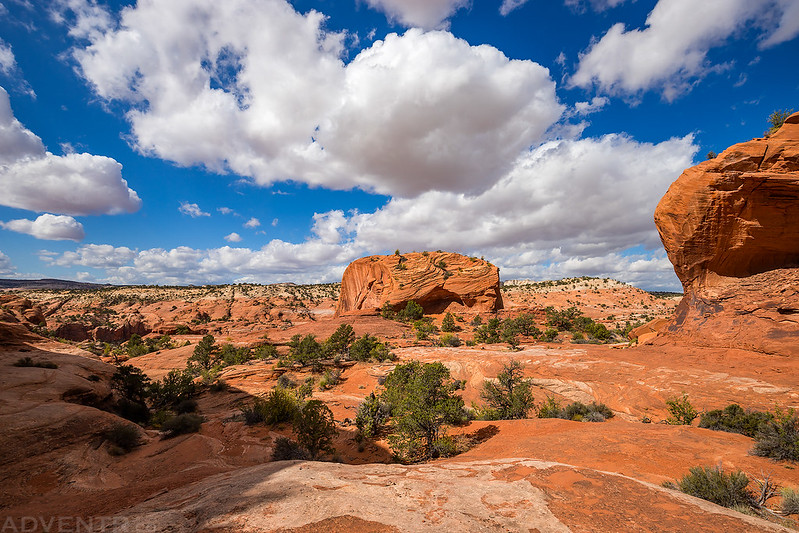 Another view of Phipps Arch as I explored some of the alcoves on this side. 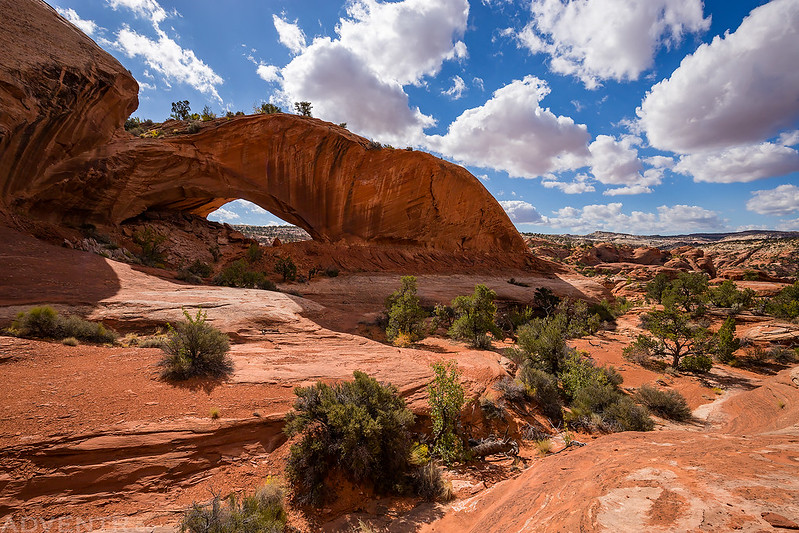 Nice light above Jared underneath the arch. I soon joined him up there and we had lunch. 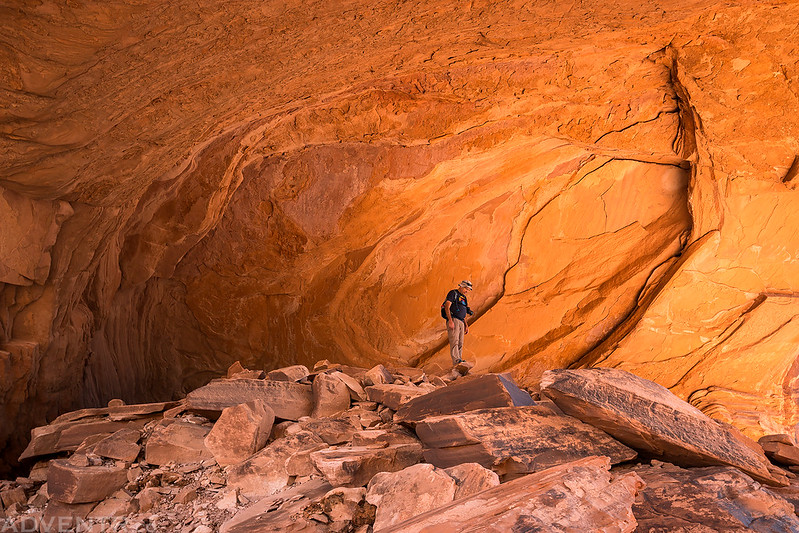 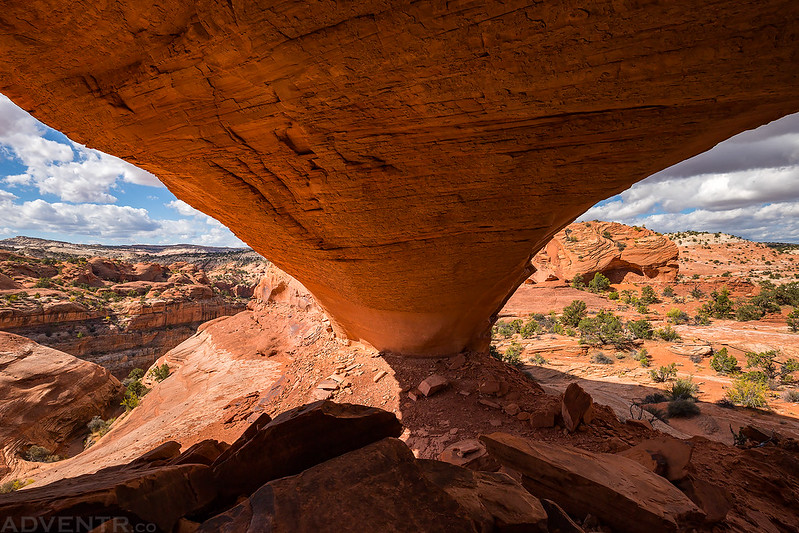 Headed back down from the arch so we could continue hiking down Phipps Wash. 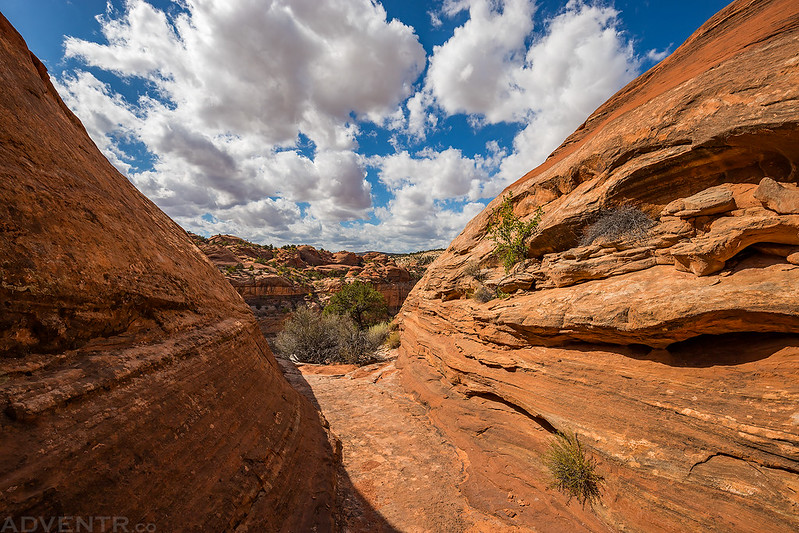 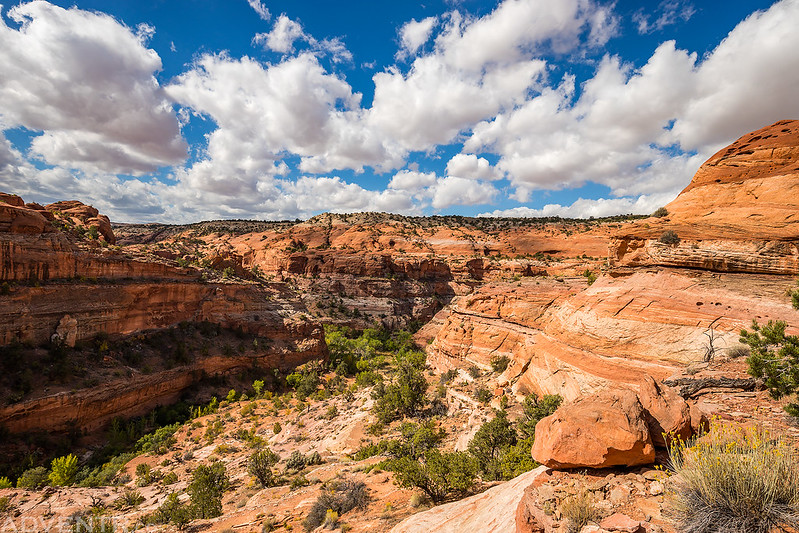 Before reaching the Escalante River we hiked up another side canyon to visit Maverick Bridge. Here’s a view from above. 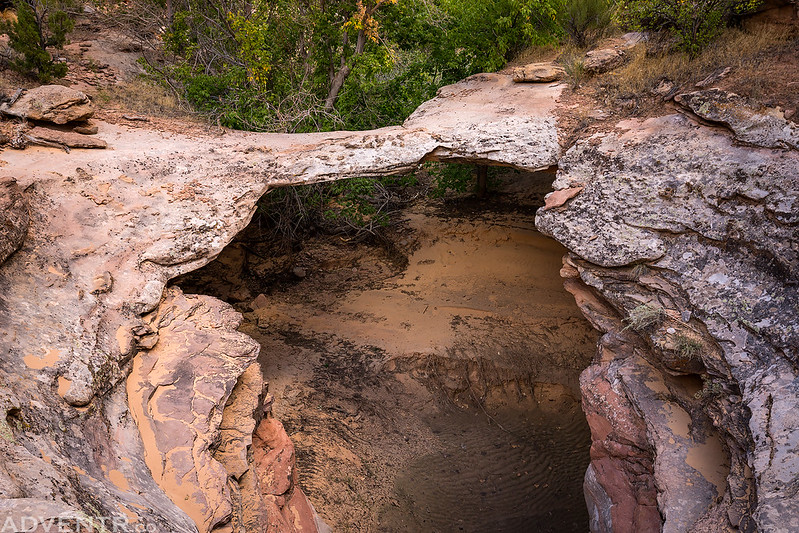 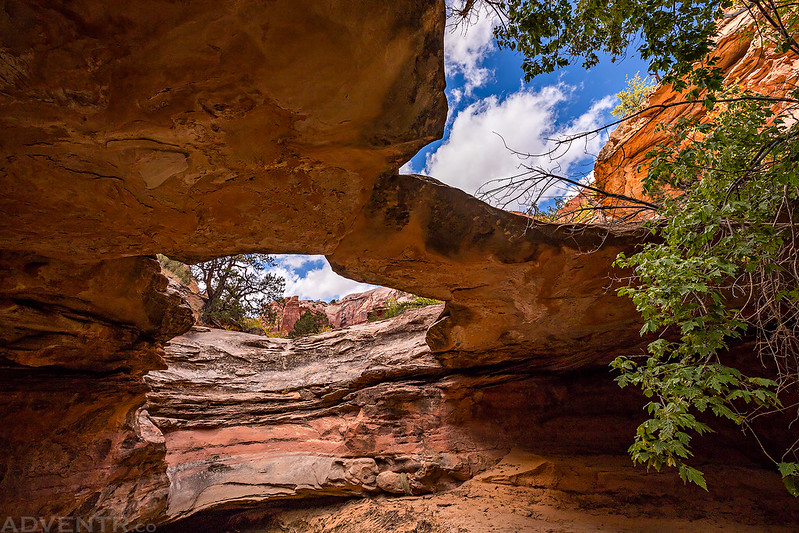 After reaching the Escalante River we followed it to Deer Canyon and visited this faded panel of petroglyphs along the way. 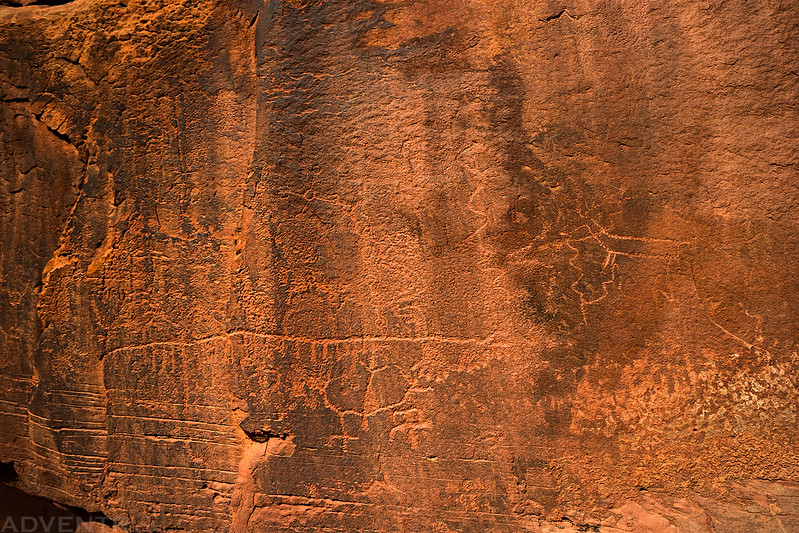 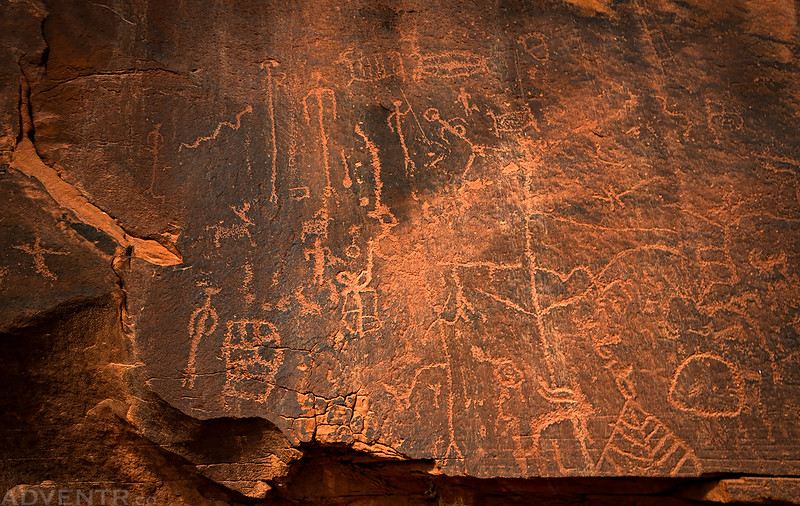 We also visited this cool line of red pictographs in a shallow alcove. 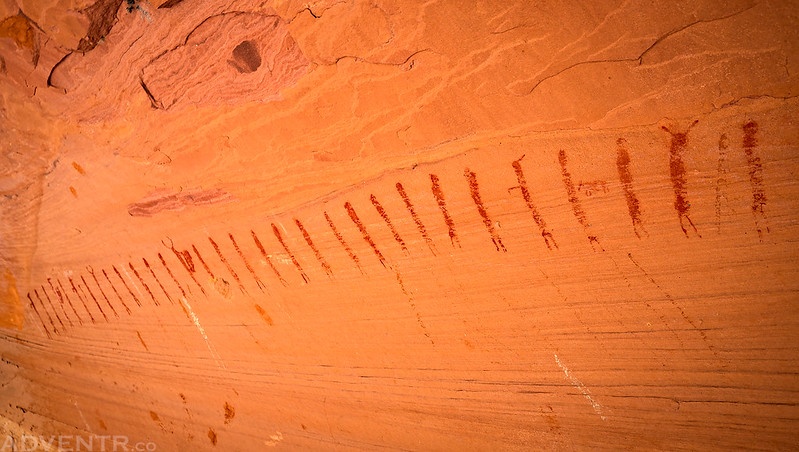 A closer look at the figures in the middle, including the main one with horns. 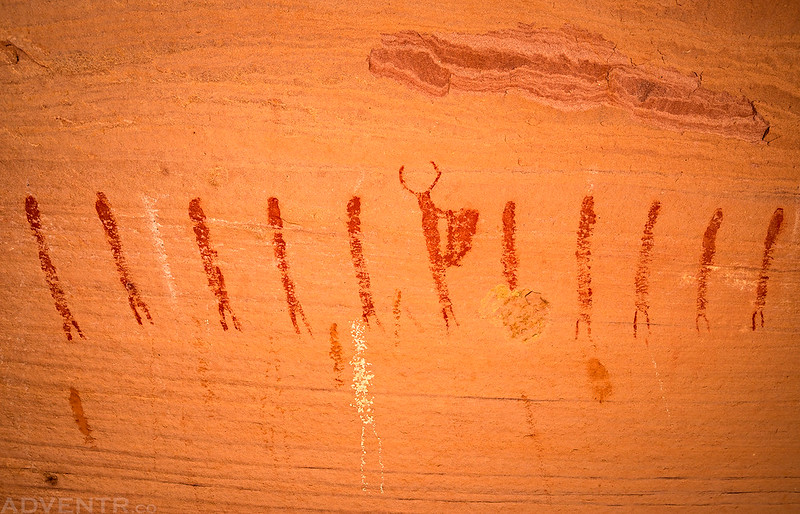 Jared hiking up Deer Canyon ahead of me as we went looking for Bowington Arch. 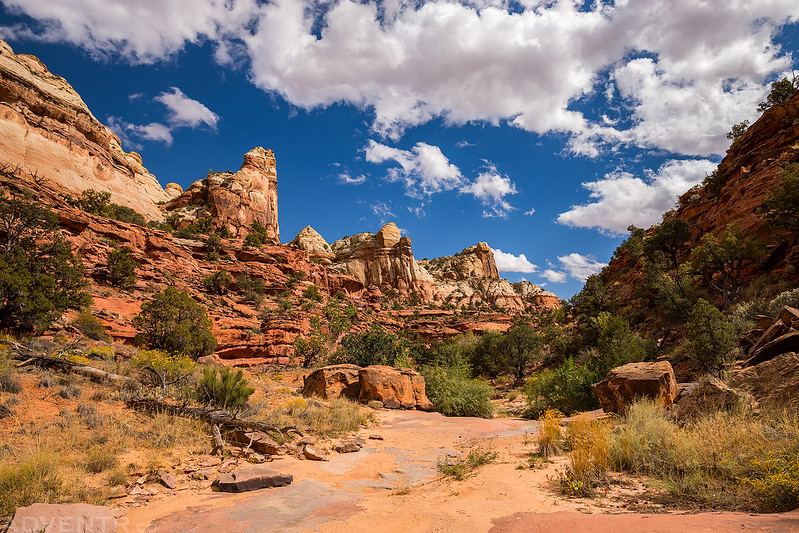 The light wasn’t great for photos when we reached Bowington Arch, so here’s the best shot I was able to get. 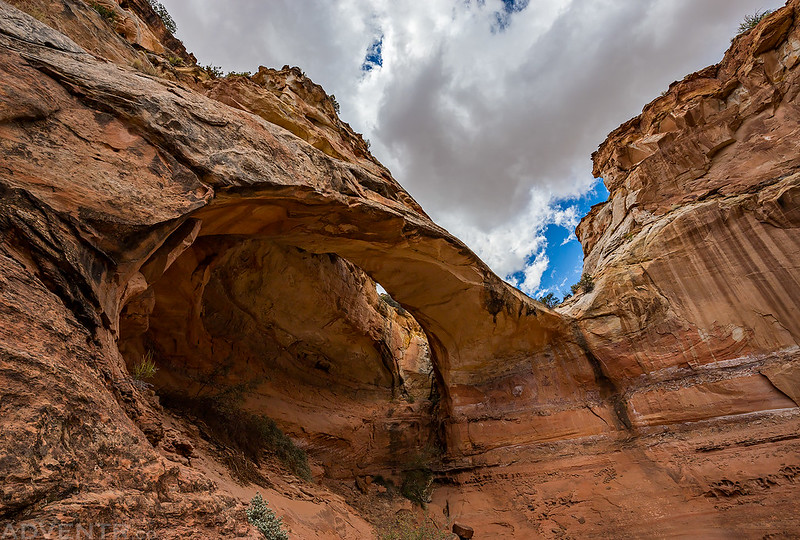 A pool we passed by in Deer Canyon as we returned to the trail along the Escalante River. 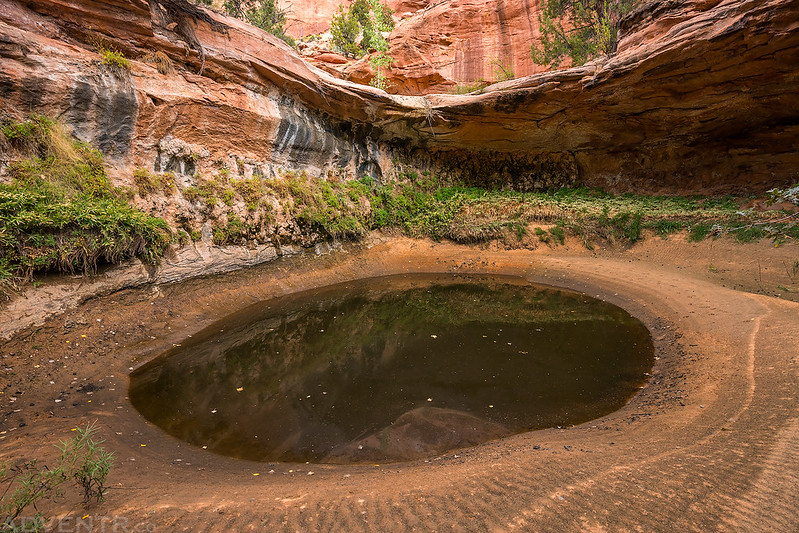 One view of the Escalante River as we crossed back to the other side. 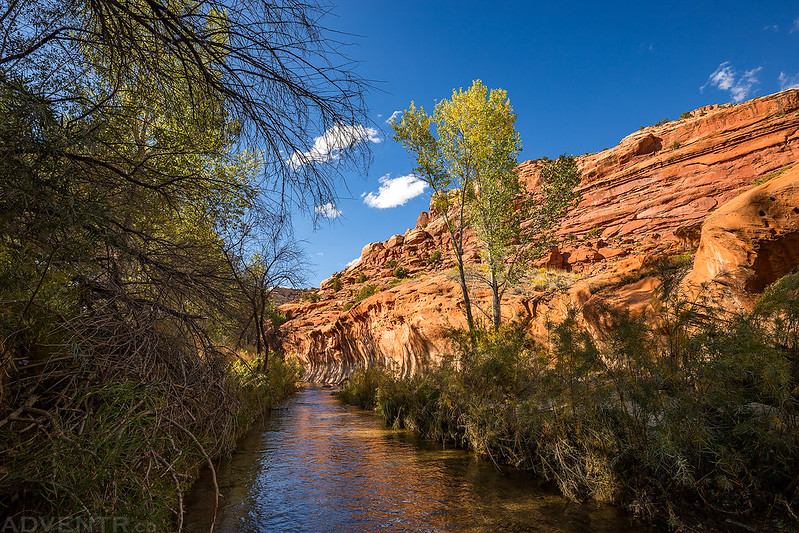 Back near the trailhead. 70 miles to Lake Powell and 15 miles to Escalante from here. 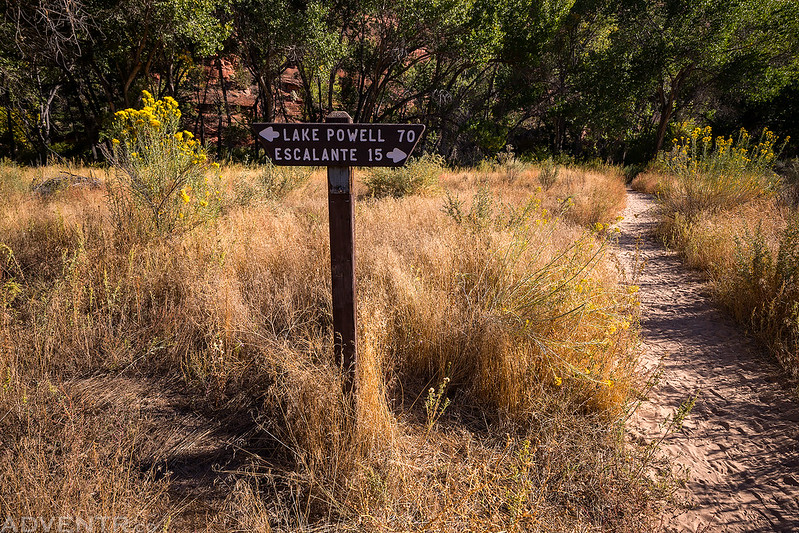 We were hungry for dinner by this time, so we headed into Escalante for burgers from Nemo’s. Then we returned to my Jeep along Old Sheffield Road and went searching for another campsite in the area. We had hoped to find something a little more sheltered since the weather forecast was calling for more strong winds and possible storms, but we didn’t have any luck with that. We ended up following a different sandy track on Big Spencer Flats and found a site under a juniper tree and tried to park my Jeep so it would help block the wind.

An evening view along the Old Sheffield Road as we searched for a campsite for the night. 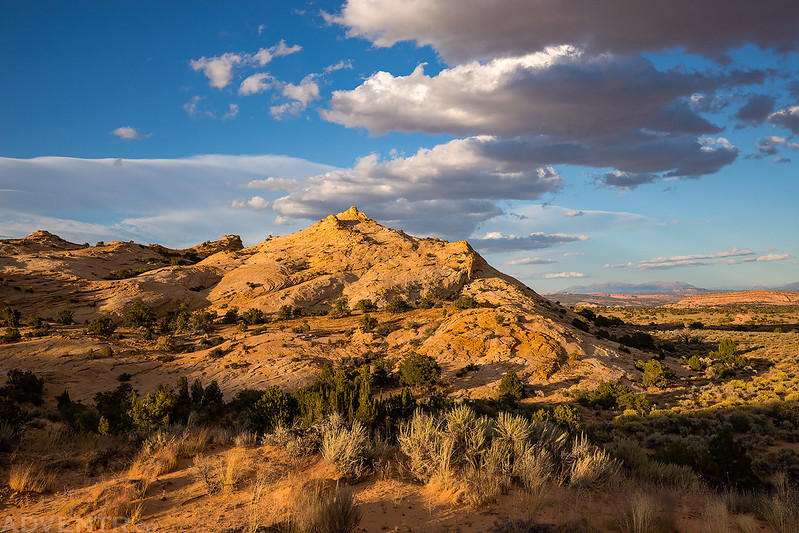