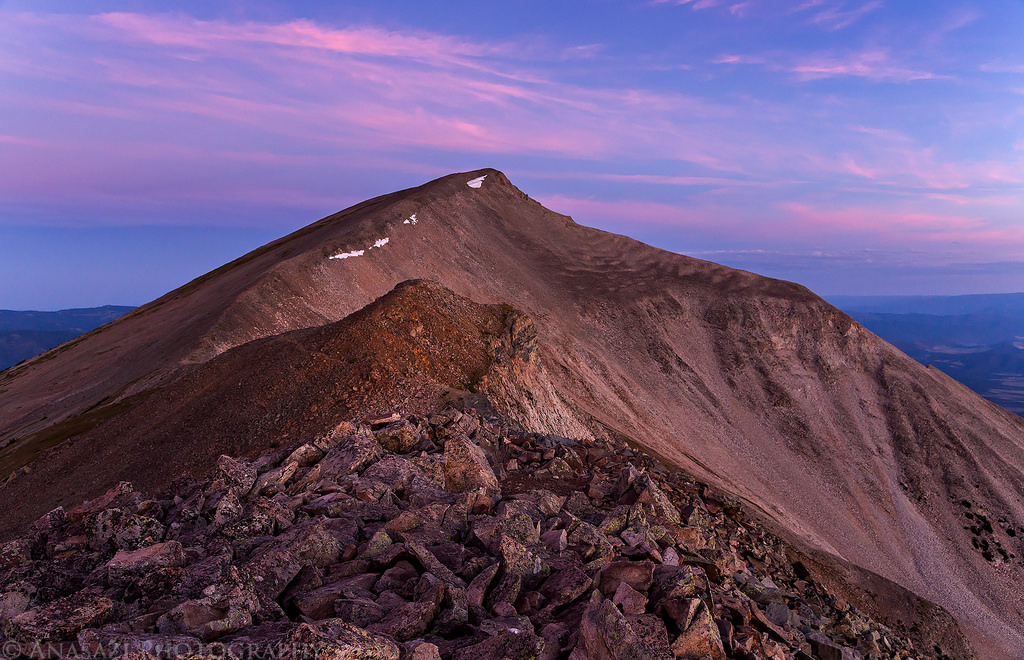 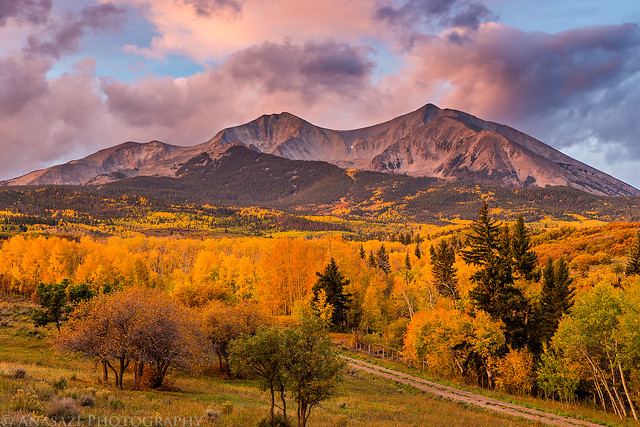 Last September while photographing Mount Sopris at sunrise I made it a goal for myself to come back this summer and climb to it’s summit. Earlier this summer I tentatively planned this trip for the last weekend in August and that date stuck, which was nice since this date happened to coincide with a full moon. The added light from the full moon would make it a little bit easier to hike in the dark with an alpine start.

We slept in late on Saturday morning (about 7:30am, which is late for us) and started the drive to the Thomas Lakes trailhead near Carbondale later in the morning than we usually would. Our plan was to backpack up to the Thomas Lakes and spend the night there before hiking to the summit on Sunday morning. Since the trail to the Thomas Lakes is only about three and a half miles we didn’t need to get a very early start. We arrived at the trailhead around noon and were surprised at how many vehicles were in the parking lot. We were hoping that most of the people were only here for day-use, otherwise we might have trouble finding a spot to camp. While we would pass a few groups of people on the trail throughout the day, the trail turned out to be a lot less crowded than I would have expected from the volume of cars at the trailhead. 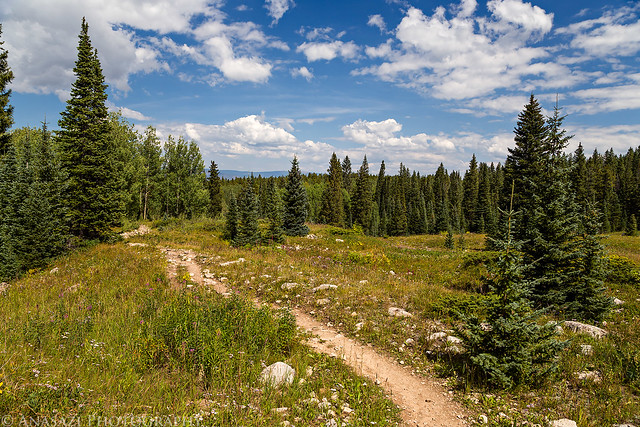 Just before reaching the lakes we entered the Maroon Bells – Snowmass Wilderness. 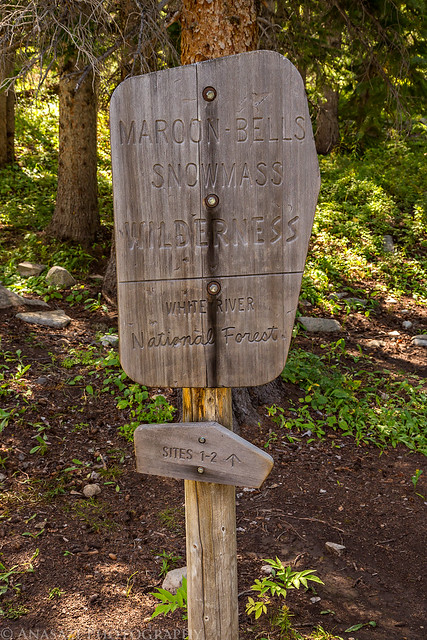 An afternoon view of the upper lake. 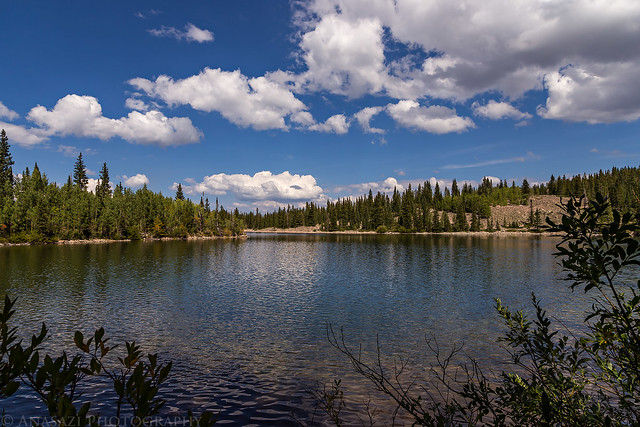 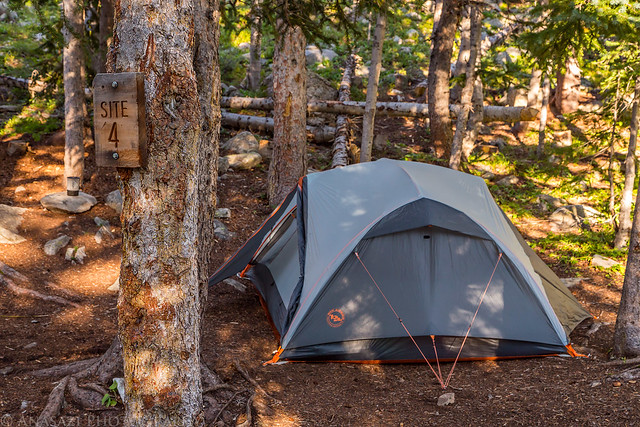 Watching the sunset from the lower lake near our camp. 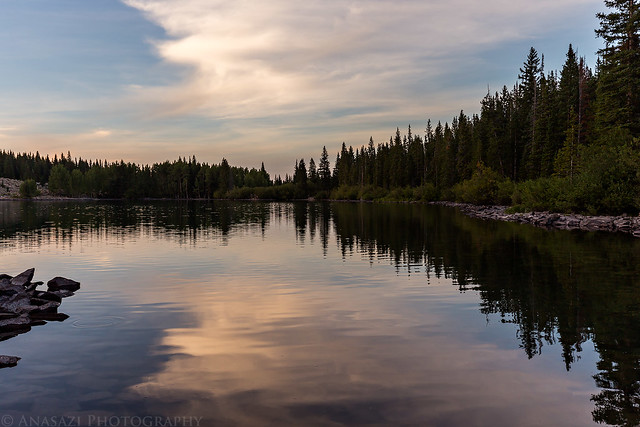 My alarm went off at 3:30am on Sunday morning and I quickly got ready to hit the trail. Diane decided that she wasn’t feeling up to the climb this morning so she stayed behind in camp. I started my hike shortly before 4:00am under the light from the full moon above. The trail initially circled around the head of the upper lake and then switchbacked up to the top of the nearby ridge which I would follow to the top. The trail was pretty steep the whole way and became rockier the higher I climbed. Following trail segments, I reached two smaller peaks along the ridge. I crossed over the top of the first one and then followed a trail around the second peak. At this point I had to lose a little elevation to reach a small saddle before starting the climb up the ridge to the summit.

On the ridge between Point 12,463 and East Sopris a few minutes before sunrise. 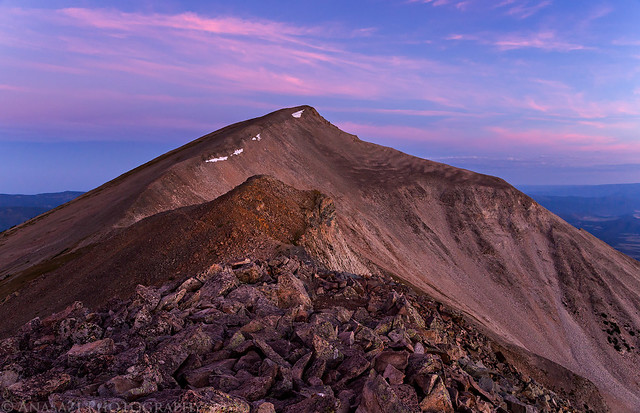 The sun lights up the rocks in front of me as I slowly climbed towards the summit. 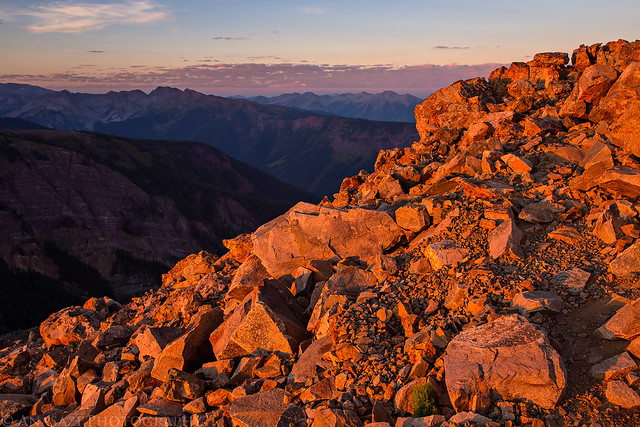 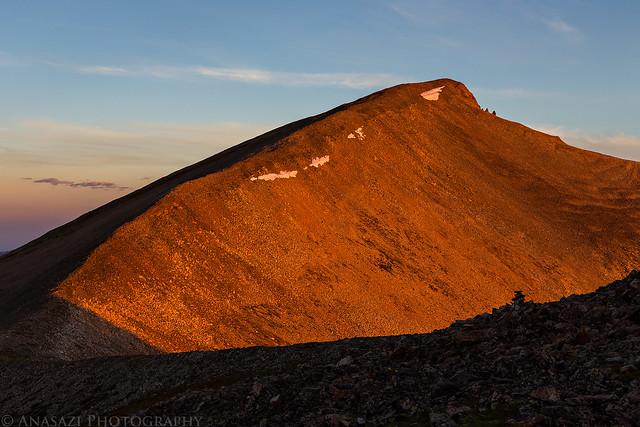 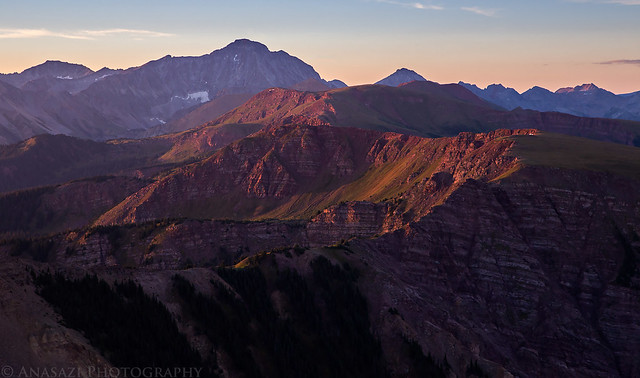 Following the rocky ridge to the summit in the light. 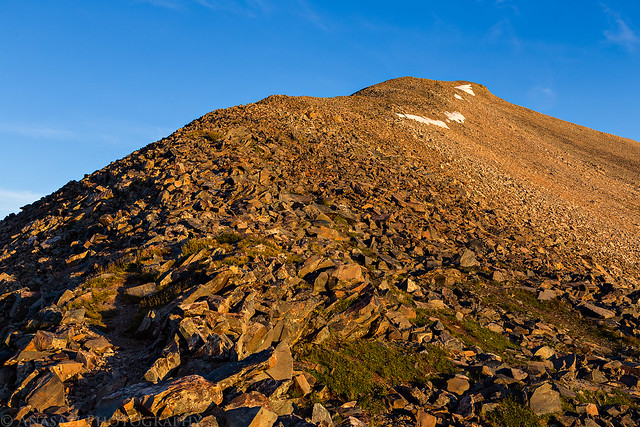 The sky was still smokey and hazy this morning, like it’s been around Colorado for the past few weeks… 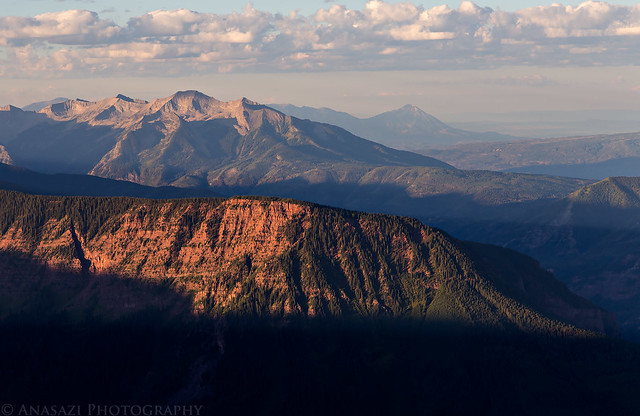 Shadow on the rocks. 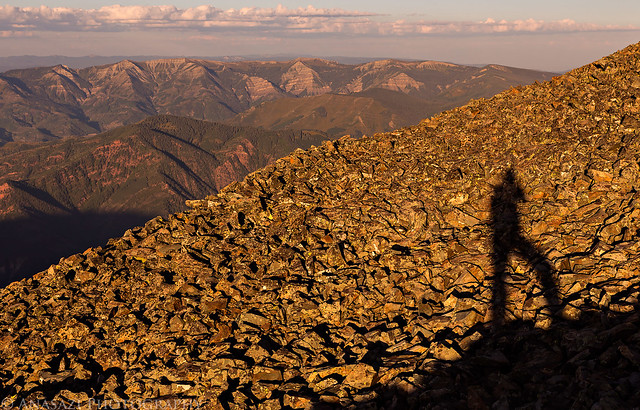 The actual summit is finally in view. 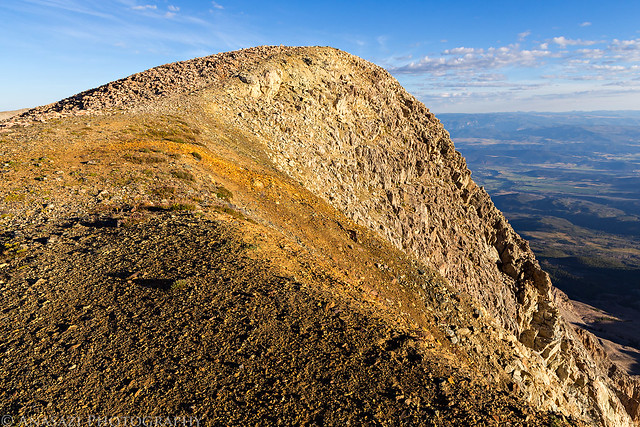 An expansive view from the summit. 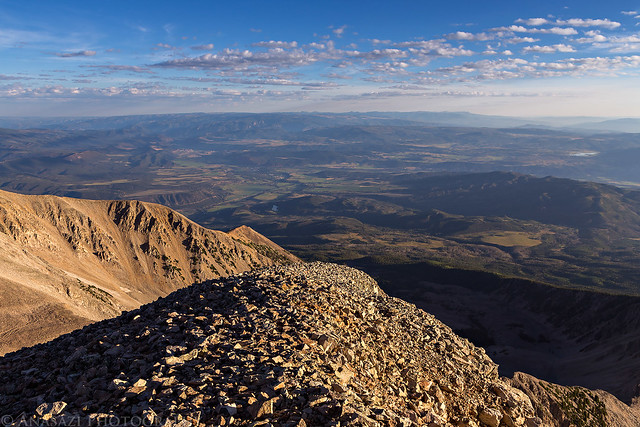 Looking over to West Sopris. I had hoped to hike over to that peak this morning, but my tired legs were having none of that today. Another time… 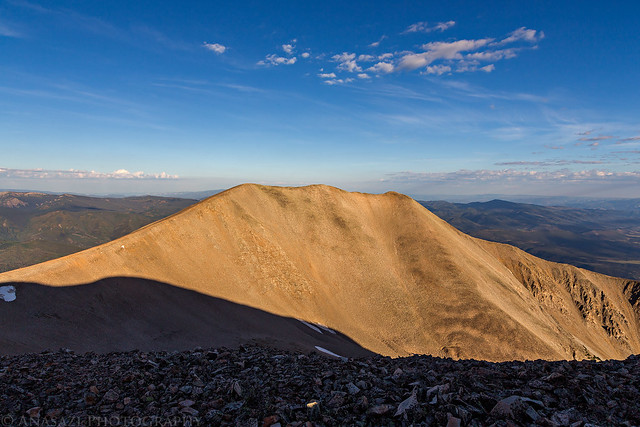 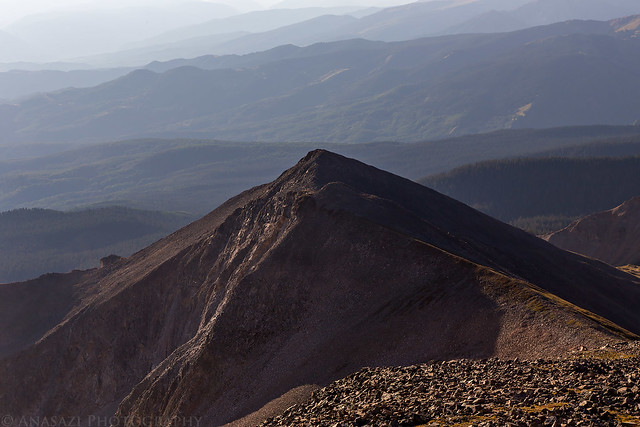 There are a few large rock glaciers on the slopes of Mount Sopris. 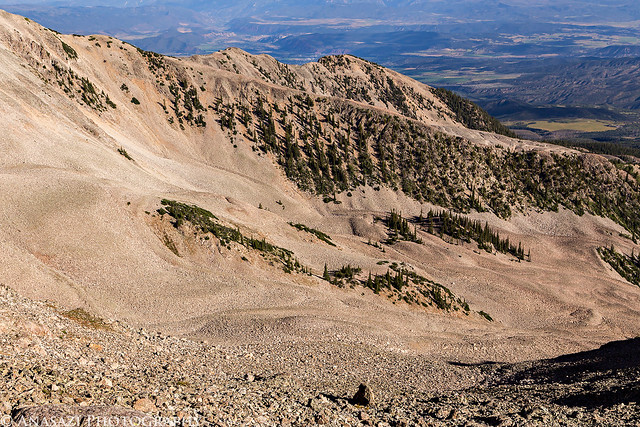 Looking down on the ridge I had hiked up in the dark, as I descended in the light. 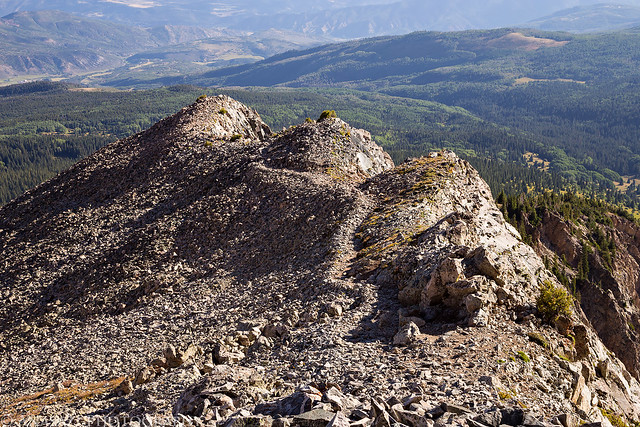 A view back up the steep rocky ridge I had hiked up in the dark. It’s always interesting to see what the sections I hiked in the dark look like in the light. 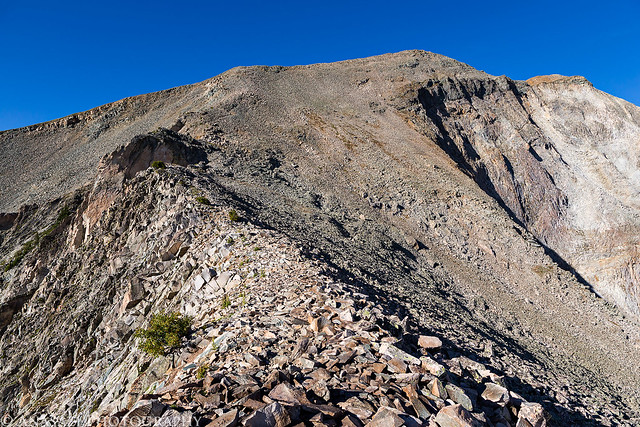 One last view of Thomas Lakes from the trail above. 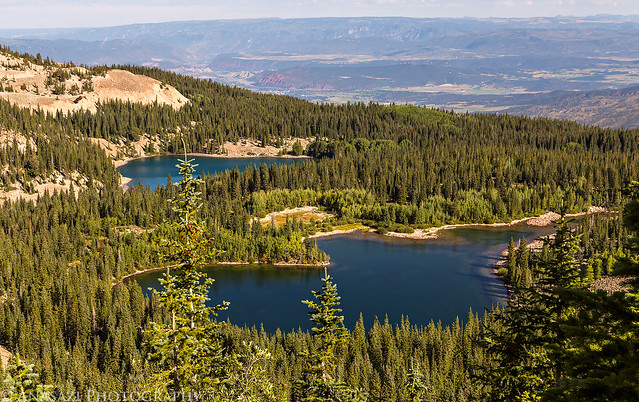 After returning to camp I rested in the tent for a little while and then we packed up and started the hike back down to the trailhead. Even though we were moving slow, we made it back to my Jeep in about an hour and a half. Before returning home we stopped at White House Pizza in Carbondale for a stuffed pizza. They have the best stuffed pizza I have been able to find in Colorado so I always make sure to stop by when we are in the area.