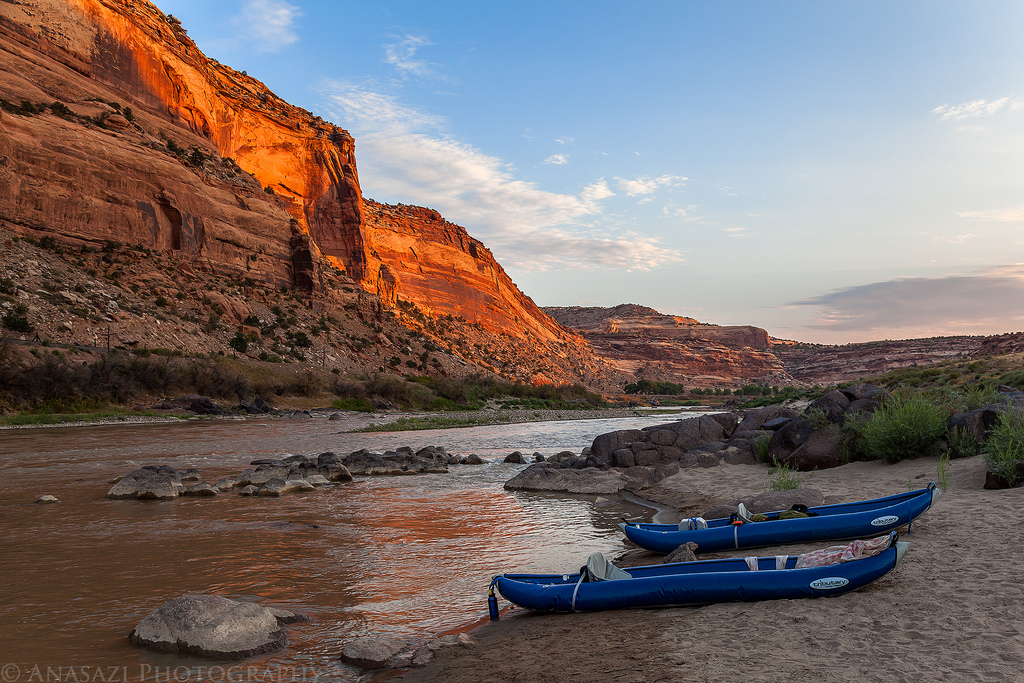 After work on Friday I met Jackson at the Westwater exit on I-70, after the slower than usual drive through two construction zones, so that we could drop his car off at the Westwater takeout along the Colorado River. Our plan this weekend was to float through the Ruby – Horsethief Canyons section of the Colorado River from Loma to Westwater. This was going to be my very first overnight river trip and I had been looking forward to it for a while. Thanks to all my new backpacking gear bought earlier this year, packing the inflatable kayak was much easier, even though I decided to bring along a bigger tent this trip. This section of the Colorado is about 25 miles in length and is pretty mild, but it flows through some beautiful sandstone canyons. Once Jackson’s car was parked in the Westwater parking lot we took my Jeep back to the Loma boat ramp and got our inflatable kayaks ready for the trip. As I suspected, we had the launch site to ourselves on a Friday evening at about 5:30pm.

Our boats loaded and ready for our weekend adventure. 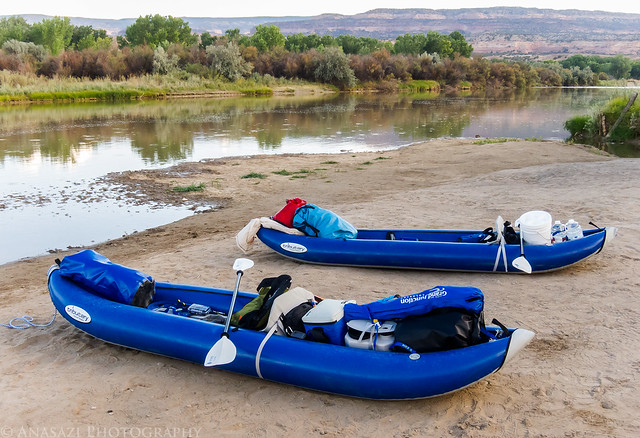 Jackson walks along the shore of the Colorado River with storm clouds building over the Book Cliffs in the background. 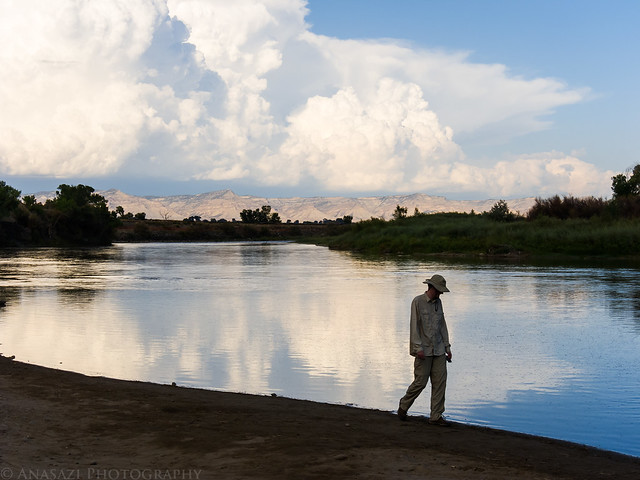 We were a little hurried this evening since our campsite was 3 miles down the river at the mouth of Rattlesnake Canyon and we weren’t exactly sure how long it would take us to get there with the lower water levels. We were on the river by 6:00pm and had two hours of daylight to make it to our camp. To make us feel even more rushed, once we were on the water some storm clouds came over the cliffs in front of us and made us a little worried that we were going to get caught in the middle of a storm. Luckily the storm missed us and it only took us an hour to paddle those first three miles to Rattlesnake Canyon.

Jackson paddles down the river as storm clouds build in front of us and behind us. 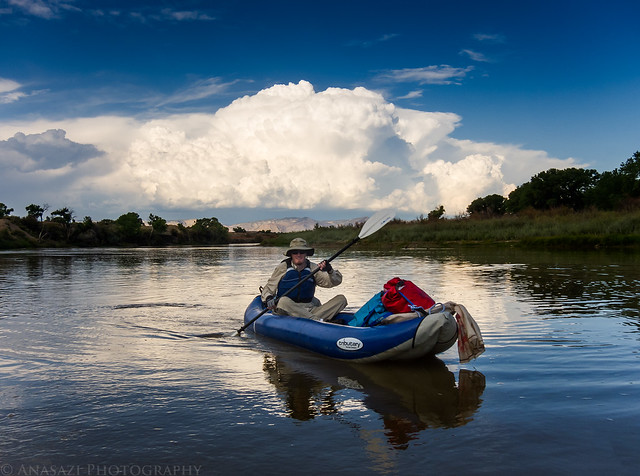 The campsite at Rattlesnake Canyon was small but nice, except for the swarms of mosquitos that were there. We quickly got camp setup and still had time to photograph the sunset.

I like the way the setting sun just lit up two small sections of the cliffs in the distance. 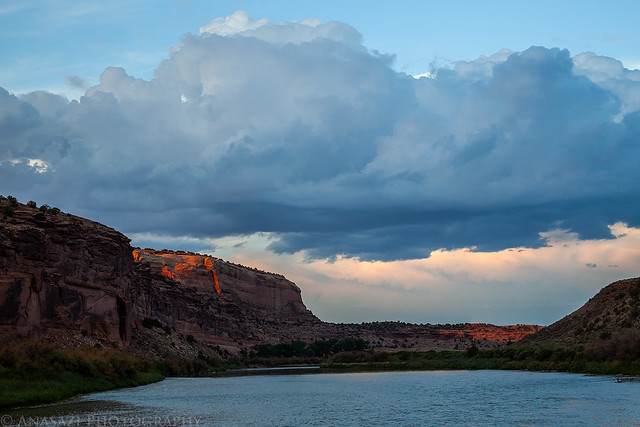 Looking back up Horsethief Canyon from near our campsite as the setting sunlight strikes the storm clouds. 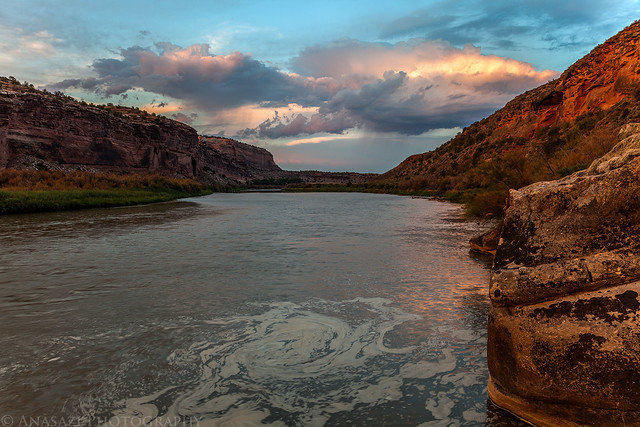 We even had a little bit of a light show before the sun completely disappeared for the night. 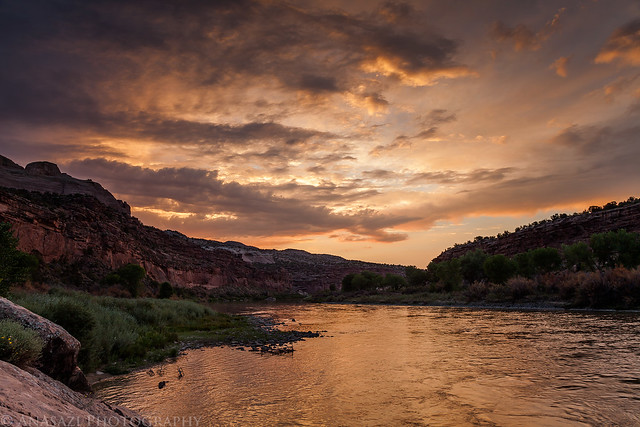 Once the sun was down we got into our tents and went to bed early. Not only were we pretty tired, but the mosquitos and other bugs were pretty annoying.

The following morning I was up early to watch the sun rise over the river.

Our campsite at the mouth of Rattlesnake Canyon as the first light of the day strikes the sandstone canyon in the background. 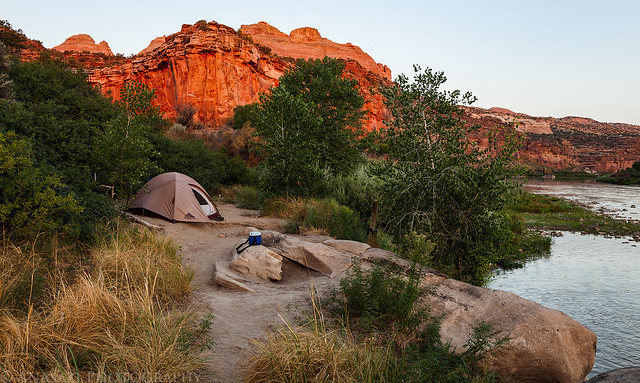 The sun peeks up over the horizon and river. 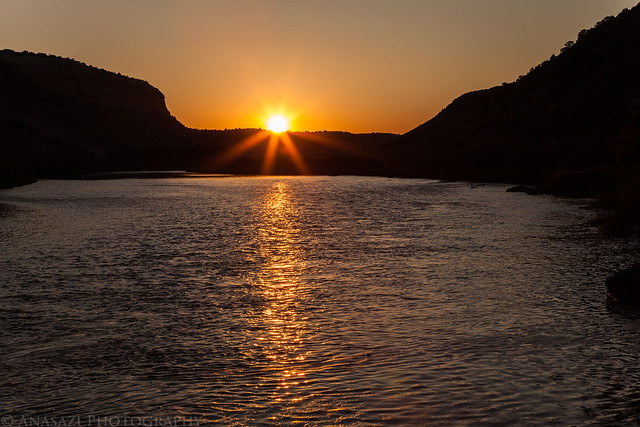 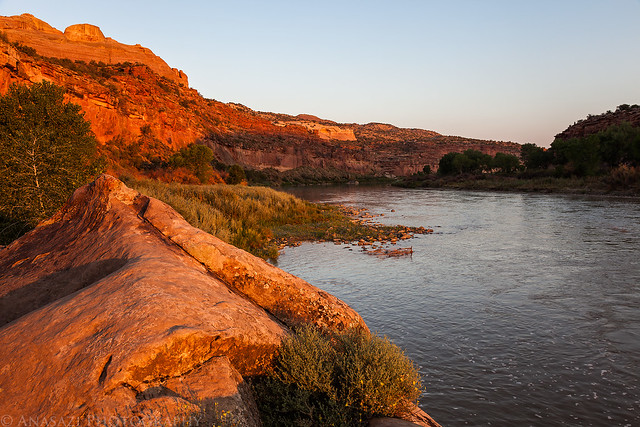 My tent in the light. I’m glad I brought my 4 person tent on this trip instead of my much smaller 1 person backpacking tent like I was originally planning. 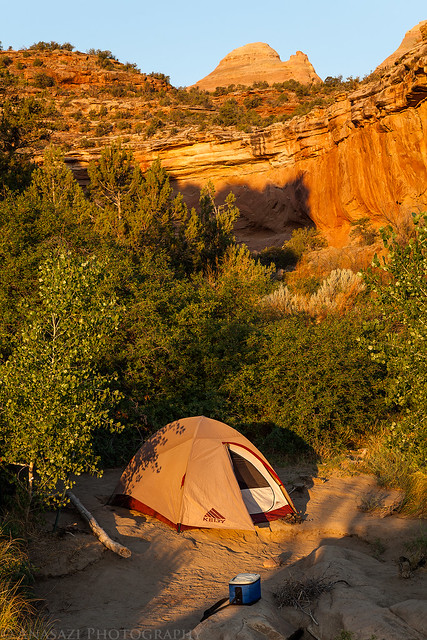 After taking some photos and having a quick breakfast, we broke down camp, loaded up our boats and continued to follow the current of the river downstream. We spent the next few hours floating and paddling while encountering plenty of wildlife along the way. We spotted two coyotes and countless blue herons along the edge of the river, not to mention all of the fish jumping out of the water. I believe that Jackson spotted over 30 different species of birds over the course of the weekend. We also made sure to check out some of the other campsites along the way to help plan future trips.

Jackson floats through the reflection of the cliff towering above. 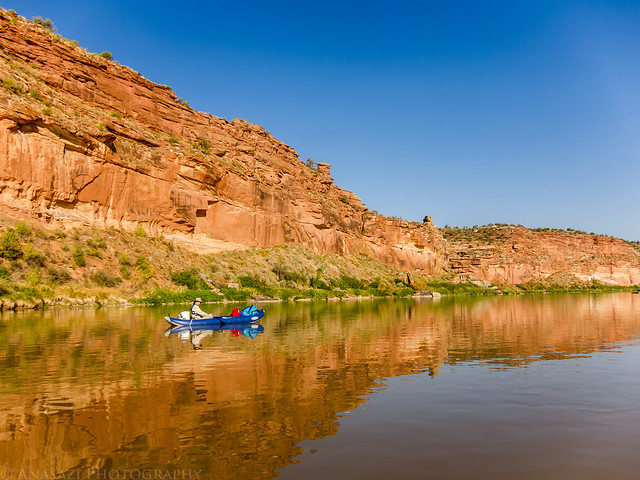 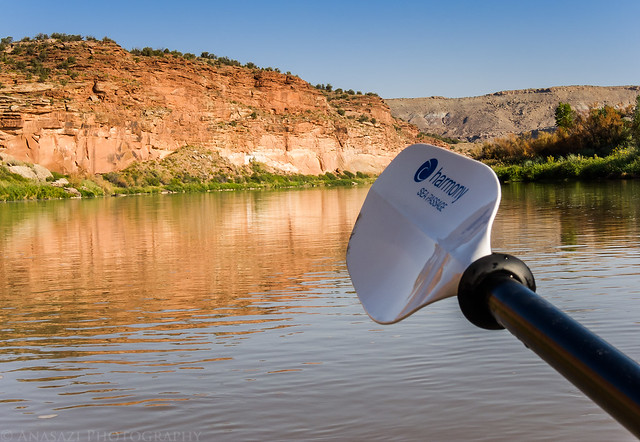 Shortly after noon we reached our next campsite at at area known as Black Rocks. This location was a nice sandy beach without the mosquitos. It was also located right next to one of the fastest moving sections on this stretch of the river, so we got to listen to the rushing water all night. Once I got my camp setup we had a couple of hours to relax before sunset. Since it was pretty warm out, we spent the afternoon hiking up a trail along the river before jumping in and floating back to camp. We stopped floating in the river as soon as the sun was blocked by the cliff above and the temperature cooled down a bit. Then we had some dinner and waited for the sun to set.

My tent setup on the beach at Black Rocks 4. 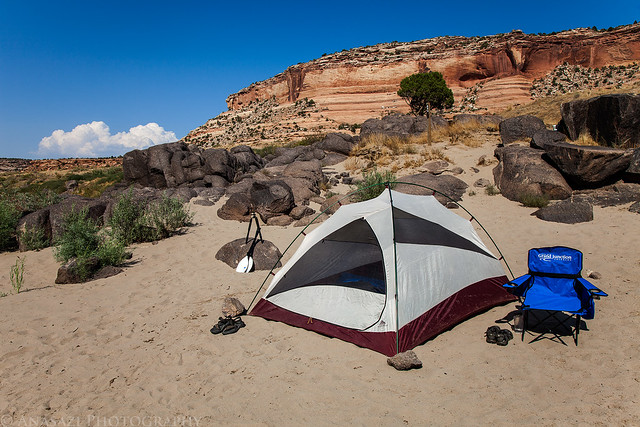 The sun sets early on our camp over the top of the canyon. 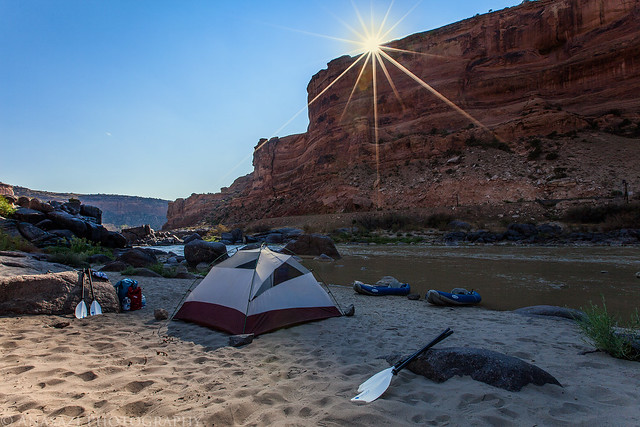 Warm evening light on a few spires near the mouth of Moore Canyon. 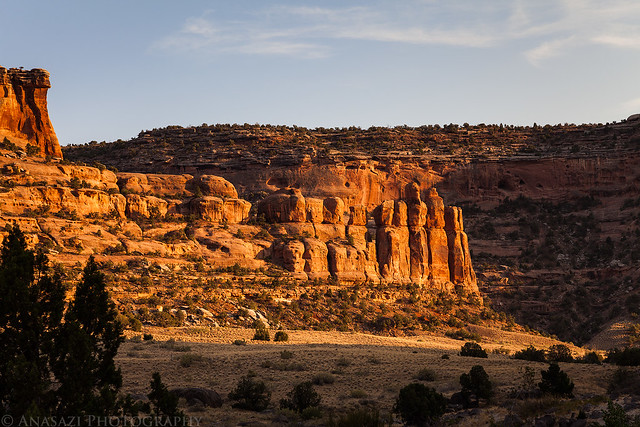 We stayed up later this night waiting for the stars to show themselves. 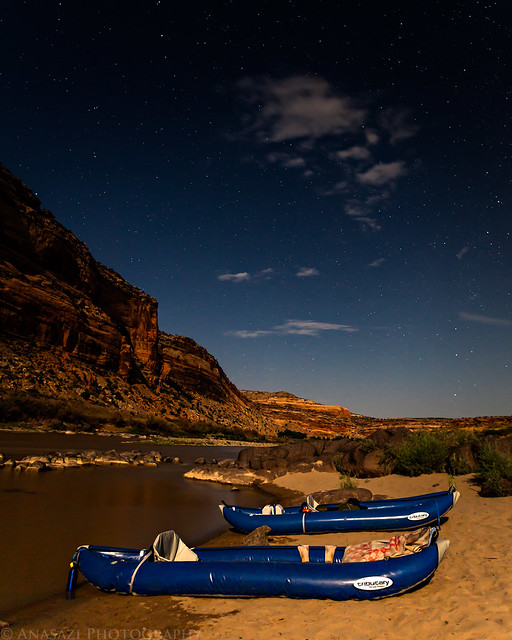 Colorado River Under the Stars by IntrepidXJ, on Flickr

I didn’t plan to wake up for sunrise on Sunday morning, but I ended up waking up that early anyway…

I stayed in my tent until I saw the sun strike the cliffs on the opposite side of the canyon. 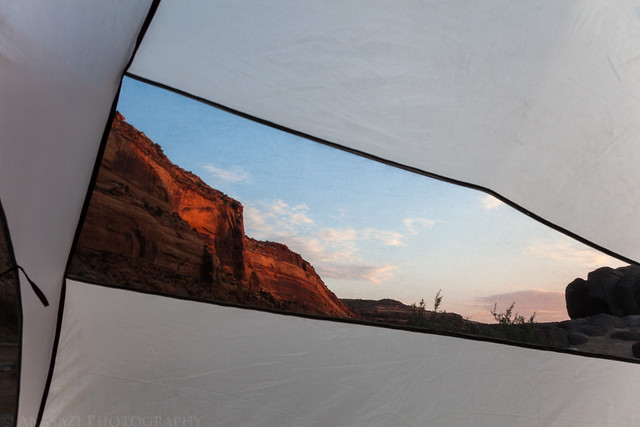 Of course, I got out of the tent for a better photo… 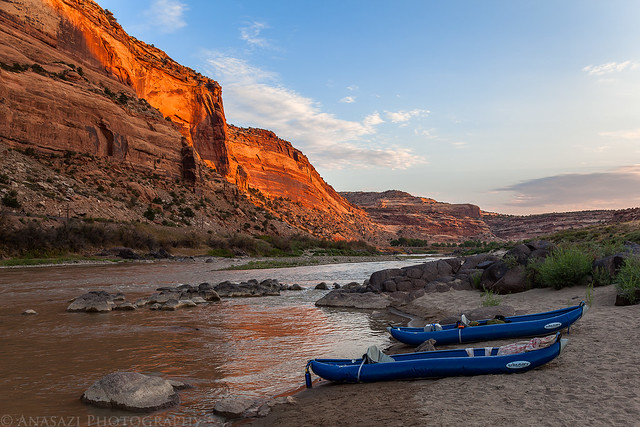 Jackson having some breakfast outside of his tent. 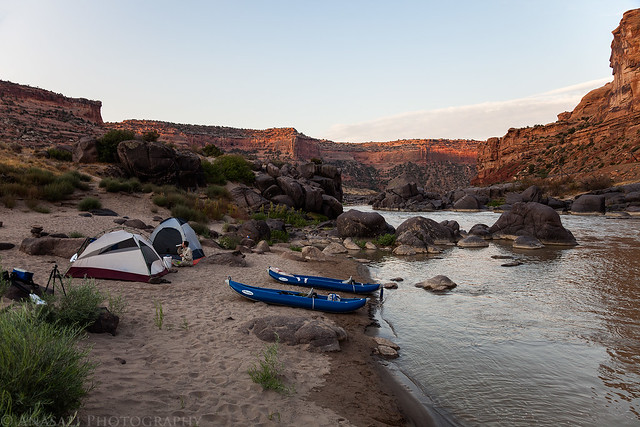 We had some breakfast, packed our gear into the boats and were back on the water by 8:00am.

Jackson floats ahead of me as we leave Black Rocks on our way to Westwater. 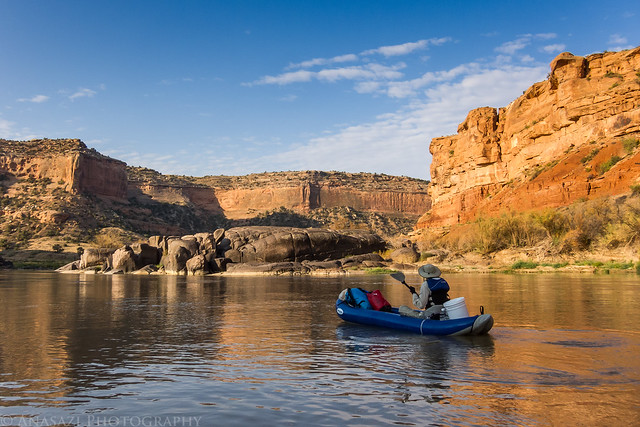 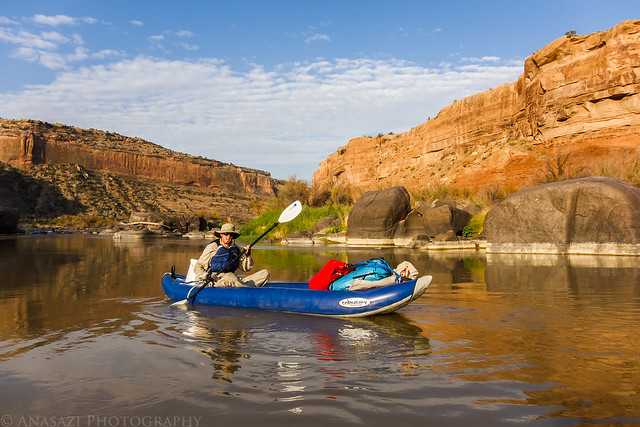 The view down Ruby Canyon towards McDonald Creek. 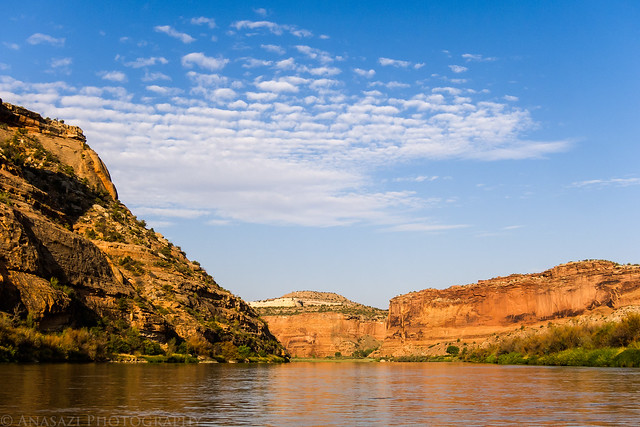 We floated another mile and a half downstream until we stopped at the trail into Knowles Canyon which is right across the river from McDonald Creek. We hiked a little way up Knowles Canyon in search of some rock art, but we didn’t find anything this time. I’ll have to come back and search another time. After the hike we were on our way down the river towards Westwater again. We didn’t make any more stops along the way, but we did alternate between floating in our boats and swimming next to them to cool off. We ended up reaching Westwater quicker than we had anticipated and were loaded up and driving back to Loma to pickup my Jeep by 1:00pm.

My first overnight river trip was a success! It was nice and relaxing and I’m looking forward to many more in the future.