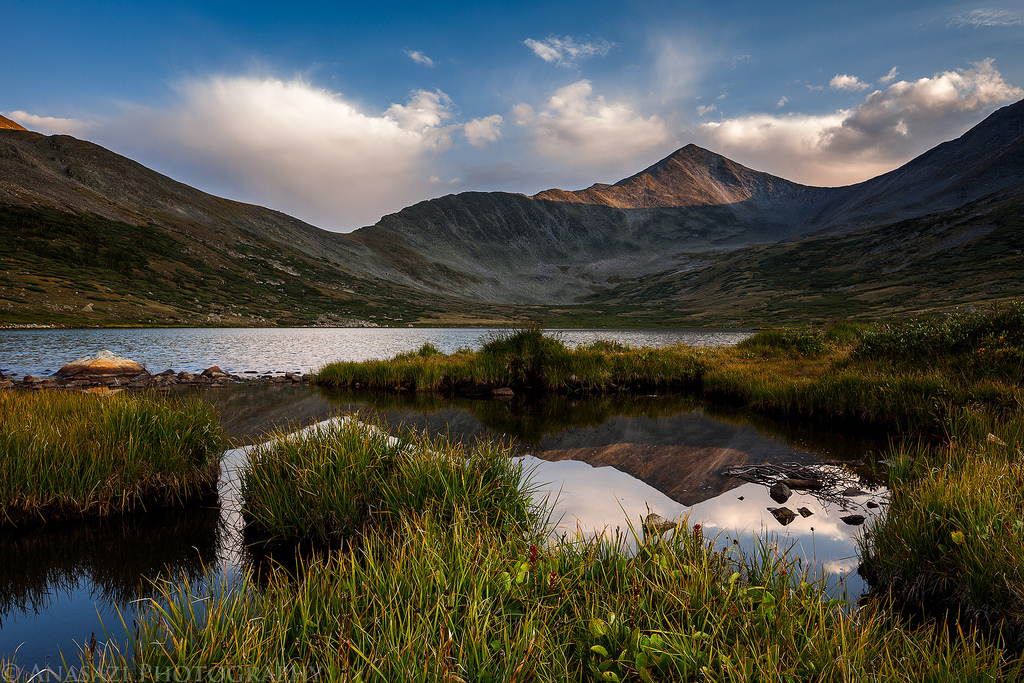 As I was driving up to Taylor Pass on the Express Creek Road, the late evening sunlight was filtered through a thick layer of smoke that has blanketed most of Colorado all week causing it to appear much warmer than normal. 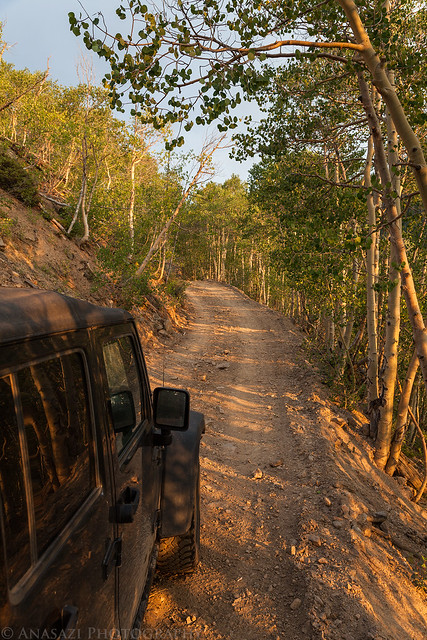 Driving up the final switchback to reach Taylor Pass. 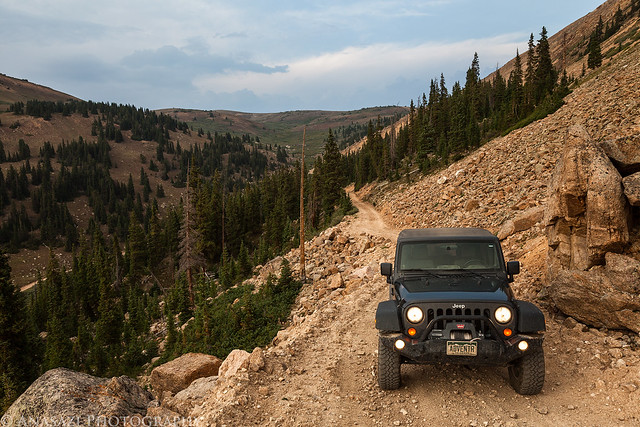 The sun getting close to setting behind the Elk Mountains. The sky still filled with smoke. 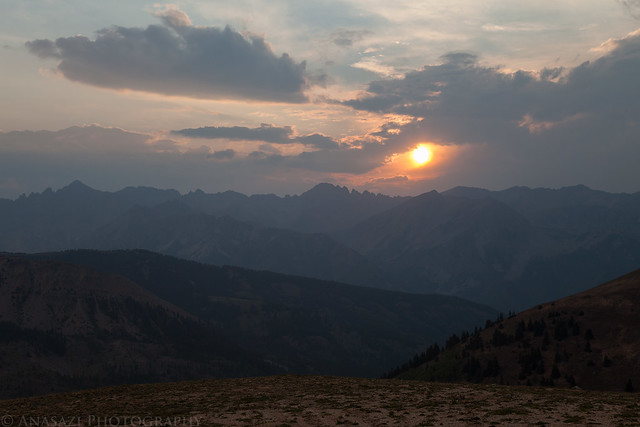 The view down on Taylor Lake from Taylor Pass. I drove down next to the lake and setup camp in the twilight. 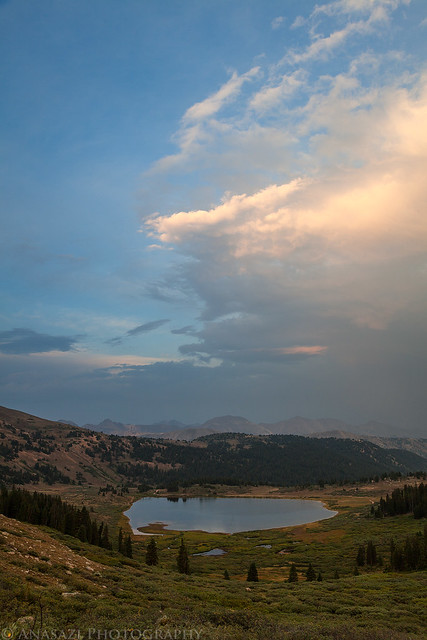 After a little reading I went to bed so I could get up early and try to catch a nice sunrise.

Here’s a photo from Taylor Lake during the sunrise the next morning. There were no clouds and still plenty of smoke in the air, so this is the best I was able to get. Taylor Pass is the low spot just right of the middle and Taylor Peak is the 13,495 foot peak just left of the middle. 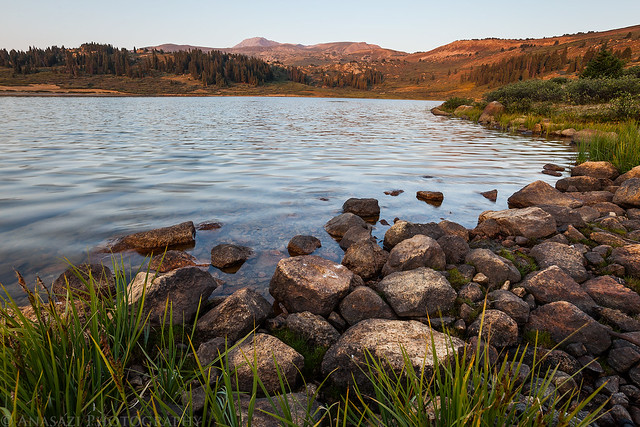 My campsite along the shore of Taylor Lake in the warm early morning light. If you look closely at my tent, you can see that it was covered with frost this cold morning. It’s been a while since that has happened…fall must be right around the corner! 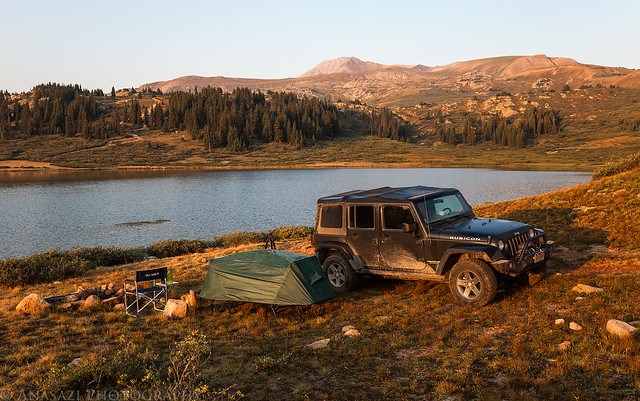 After some breakfast and then packing up camp, I drove back up to Taylor Pass and took the Richmond Hill – Aspen Mountain Road back to Aspen. Much of the route followed along the top of Richmond Ridge with much of it above tree line.

There was still plenty of smoke in the air this morning. 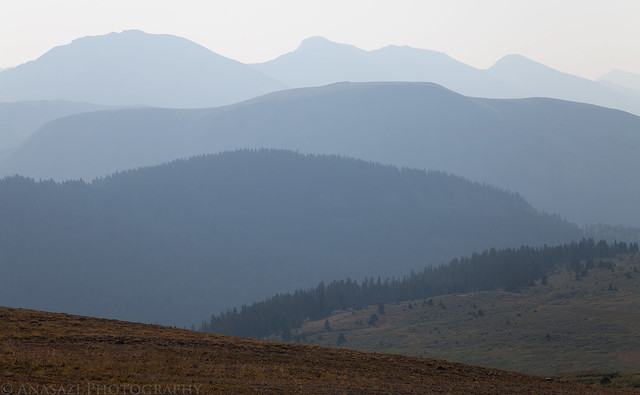 The road following the top of Richmond Ridge with the Collegiate Peaks Wilderness on the right side of it. 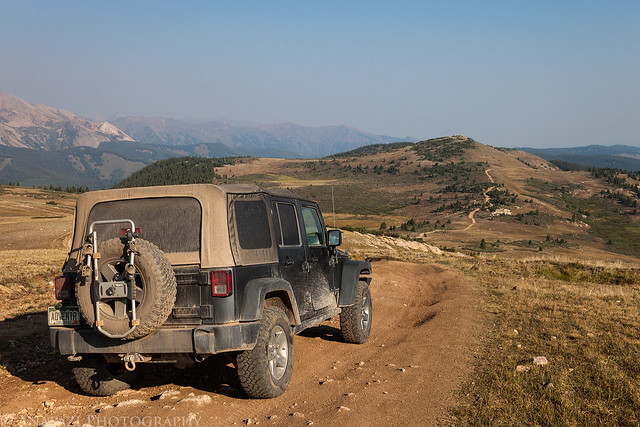 While driving down the Aspen Mountain Summer Road, I switchbacked back and fourth under the gondola a few times. 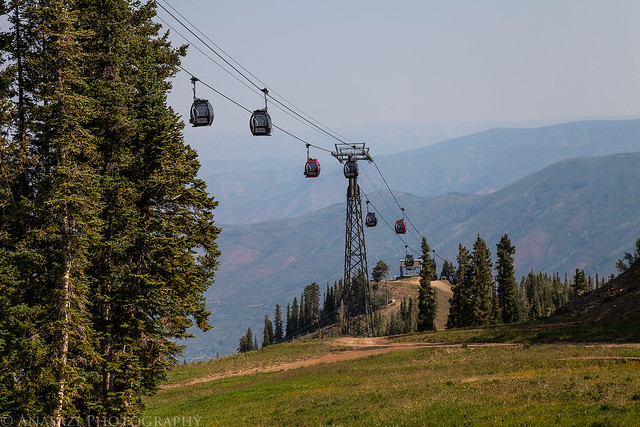 When I reached Aspen again, I decided to take paved road over Independence Pass towards Buena Vista. Before reaching the pass I took a side trail up Lincoln Creek that I have not been up before. Near the end of the gulch the road climbed steeply up to the Ruby Mine.

Climbing up to the Ruby Mine in Lincoln Gulch. 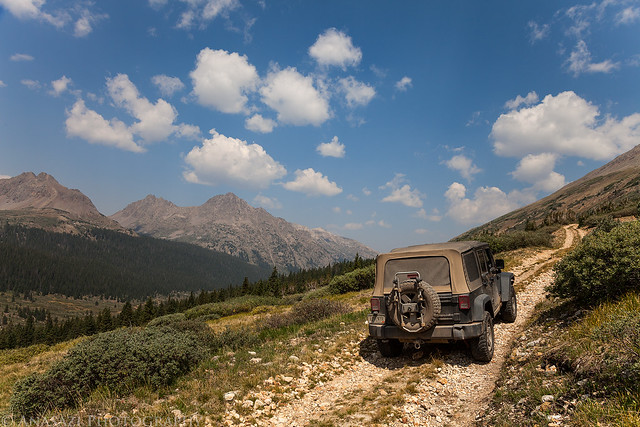 After finishing up my short side trip along Lincoln Creek I made my way over the the historic town of Independence followed by Independence Pass. There were too many people around and still much smoke in the sky, so I didn’t really bother sticking around and taking photos this time. After an early dinner at the Coyote Cantina in Johnson Village I drove along Chalk Creek into the Sawatch Range. I eventually reached Hancock Lake which is where I decided to spend my second night. I spent the evening taking photos around the lake during sunset since a lot of the smoke had finally cleared out. 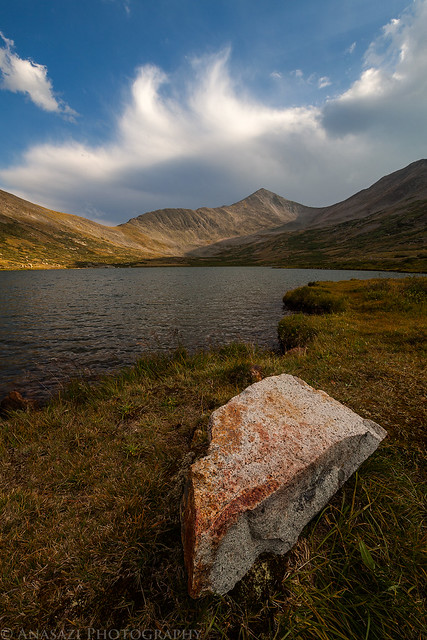 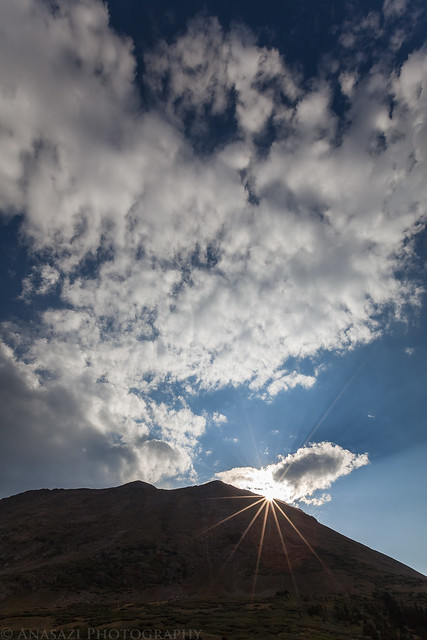 My campsite the second night near Hancock Lake. 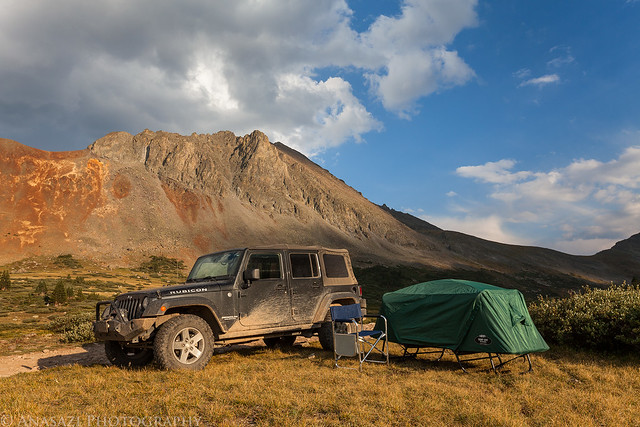 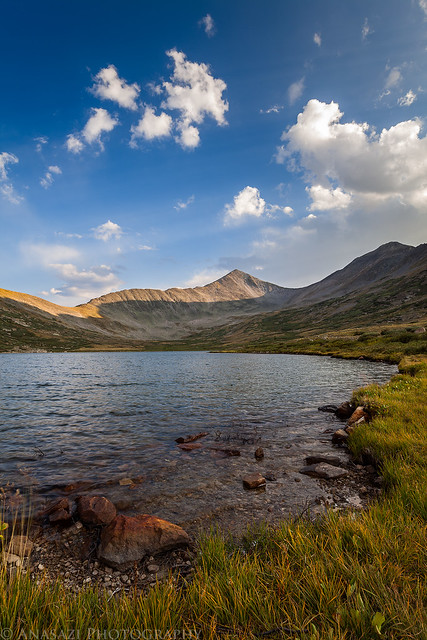 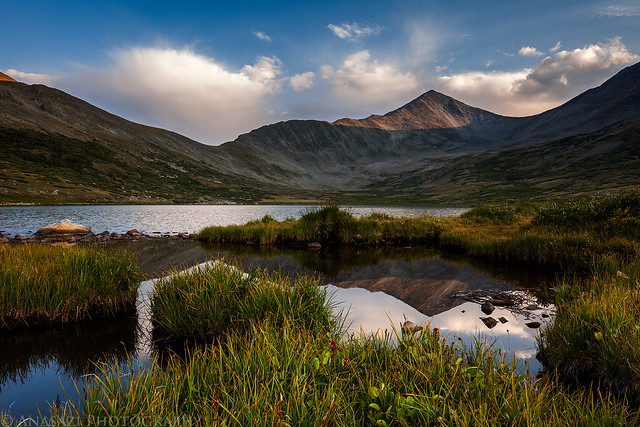 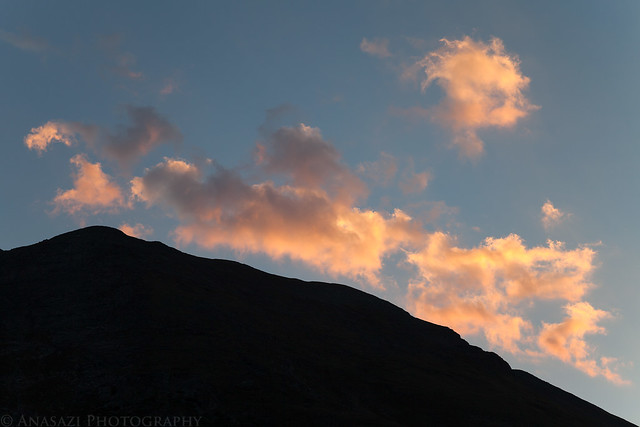 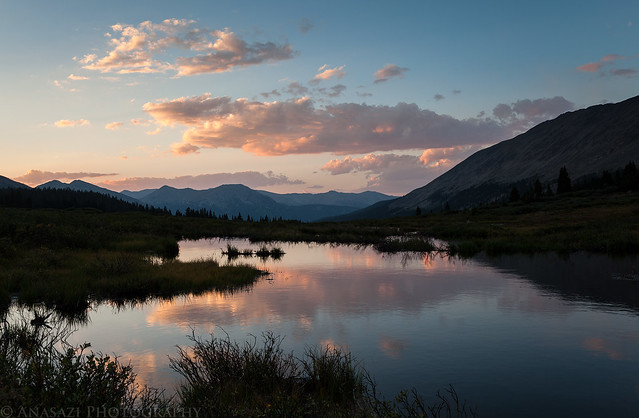 When the sun was finally down I hiked back to my tent so I could get to bed. Unfortunately, I must have picked a terrible spot to camp that night since the wind continued to blow into my tent pretty regularly. Usually, after the sun goes down, the wind also dies down, but not this time. I had gone to bed around 9:30pm and was still awake because fo the wind at 12:30am. At that time I had had enough and quickly packed up my camp into the Jeep and started moving. I was wide awake and considered driving straight home, which would have been a four hour drive at the minimum. After driving for about an hour I realized I was now too tired to make it all the way home and pulled off on the Old Monarch Pass road to find another campsite. I did manage to find a nice site and was back in bed by 2:00am. I could still hear some wind howling in the trees and mountains around me, but it wasn’t blowing through my tent this time. Before going to sleep, I turned off the alarm on my phone since I knew there was no way I would be up for sunrise in the morning…I was sleeping in!

I ended up sleeping in until about 9am that morning and then slowly got my camp packed back into the Jeep. When I was ready to go I finished the drive down from Old Monarch Pass before finishing the drive home through Gunnison, Montrose and Delta on US 50.