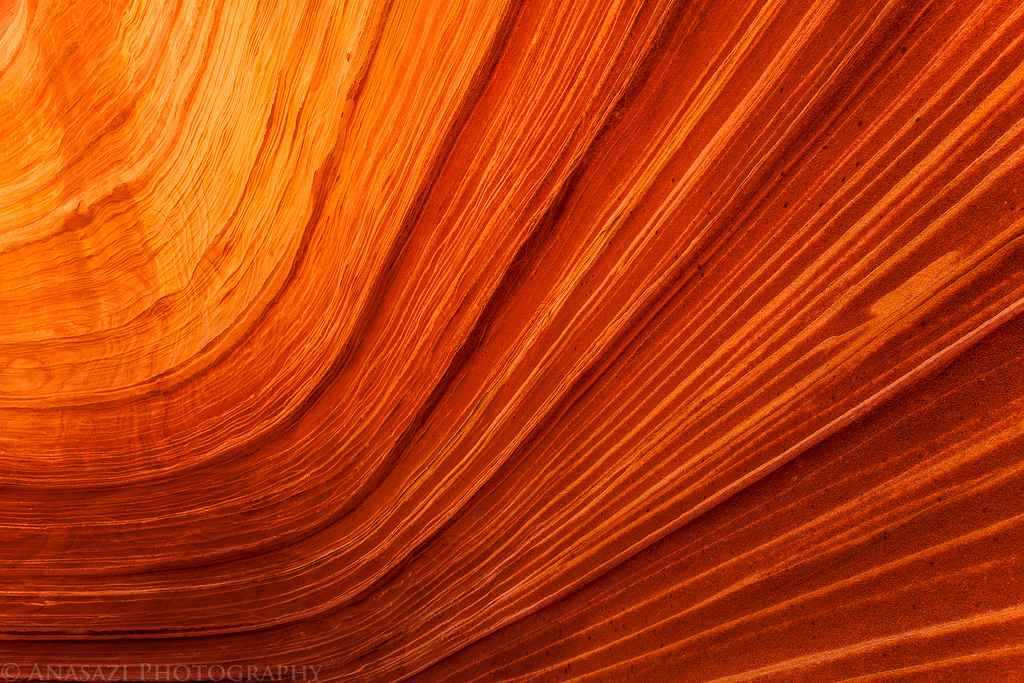 A few months back I managed to get another pair of permits to the Coyote Buttes North area so that Amanda and I could visit The Wave again and explore a few new areas. It turns out that I had picked a great weekend to go without originally realizing it. Our permits were for Saturday May 19th and it just so happens that the Annular Solar Eclipse was going to be happening on Sunday the 20th and some of the best views of this event would be down in the same area. It couldn’t have worked out better! We would visit Coyote Buttes North on Saturday and then stick around for the Solar Eclipse on Sunday with a little extra time to check out Wire Pass.

After work on Friday we finished loading up the Jeep and headed south through Utah to the Paria Plateau in northern Arizona. As we drove past Moab the light played hide and seek with the peaks of the La Sal Mountains in the distance. 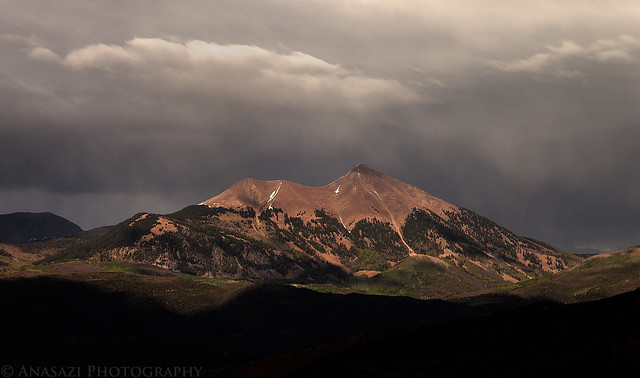 We also made a quick stop at Wilson Arch for a photo since the last photo I took here in late afternoon light was with a point & shoot camera. 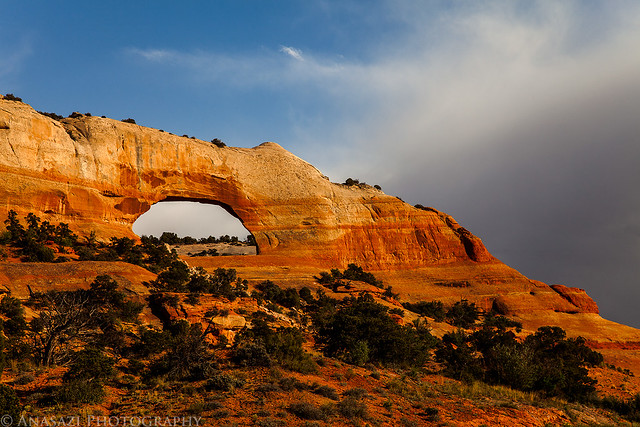 The sun was just setting as we drove through Bluff, and it lit up the clouds behind the Horse Boulder nicely. 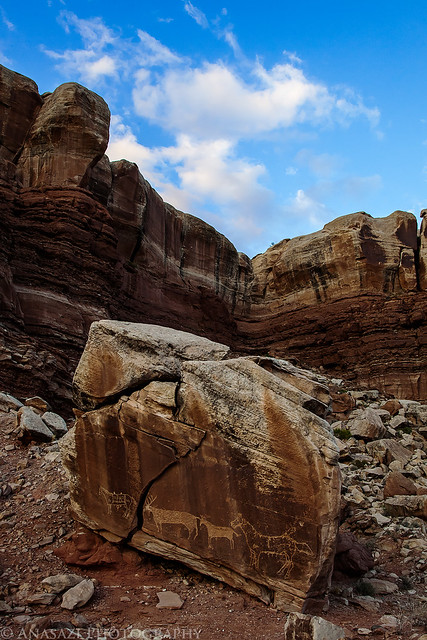 We had planned to stop in Kayenta for a snack, but when we arrived we found that every restaurant was packed full of cars and people, and even the drive-thru’s had enough cars that the lines were backed up into the highway. It was a strange sight, considering it was almost 10:00pm at this time! I guess Kayenta is a happening place on a Friday evening? Needless to say, we didn’t stick around and just kept on driving.

After a stop in Page for some fuel, we finished our drive down the House Rock Valley Road and found a campsite just over the border in Arizona. We quickly setup camp and were in bed by about 12:30am. It turned out to be a longer drive than I had planned, and we were tired. I guess we made too many stops for photos along the way…

The following morning we slept in late to catch up on some sleep and had breakfast. We took our time getting ready to start hiking since I wanted to stick around Coyote Buttes North in the late afternoon. When we were finally ready to go we drove the few miles back to the Wire Pass Trailhead to start hiking. I was surprised at how many cars were parked here. The lot was packed! I ended up parking all the way at the top by the large campsite. I’ve only been here in the winter months before when there have only been a few vehicles, at most. It seems that there were a few large groups that were going to be hiking Wire Pass and part of Buckskin Gulch.

These yellow flowers were all over the place in the sandy areas on the hike out. 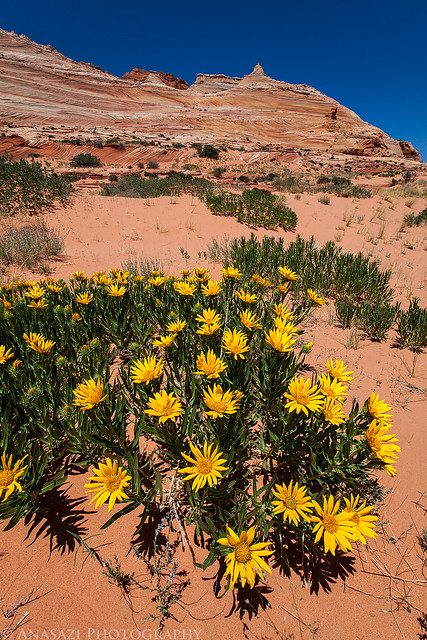 Since I already have plenty of color photos of The Wave with better skies, here’s something a little different from me. 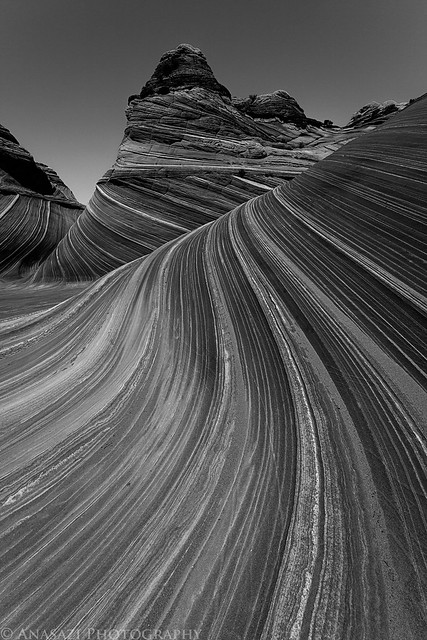 The reflected light in ‘The Passage’ was amazing when we arrived. Great lines, too! 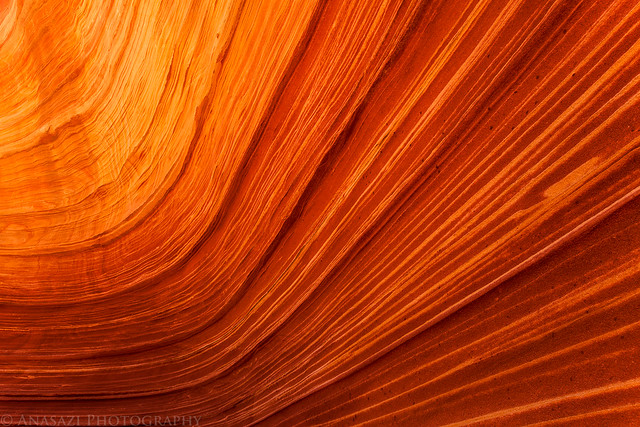 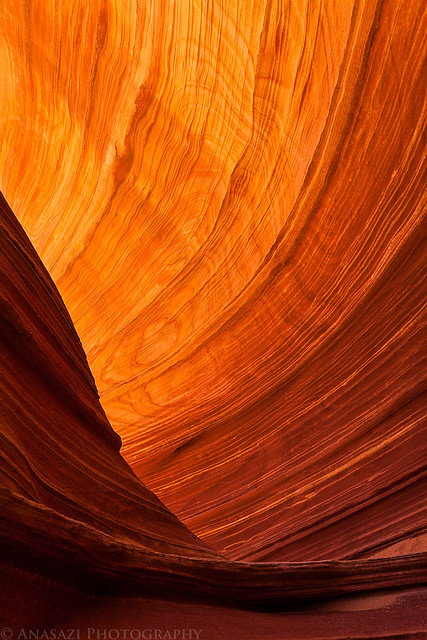 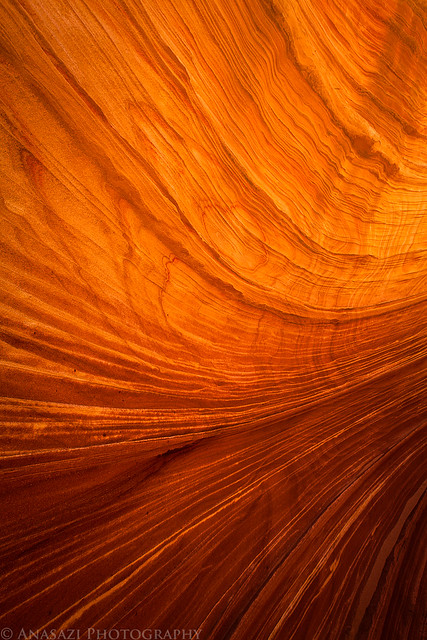 Amanda took this photo of me. 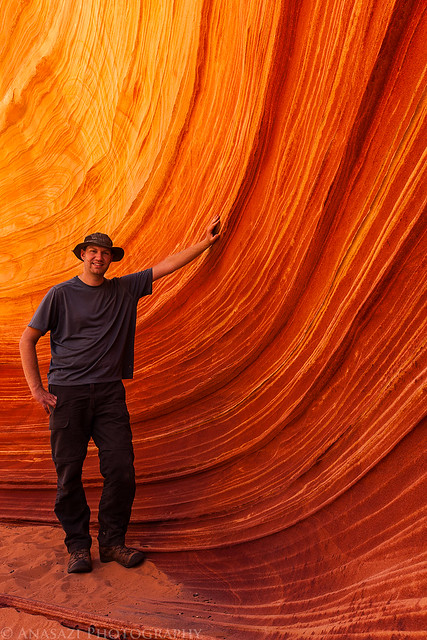 After spending a little time at The Wave, Amanda found a nice shaded spot to sit and read while I hiked over to Sand Cove. The bright white stripes found in the sandstone here were very cool. 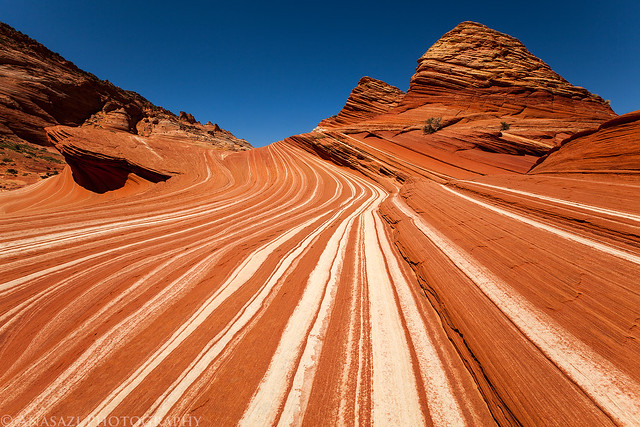 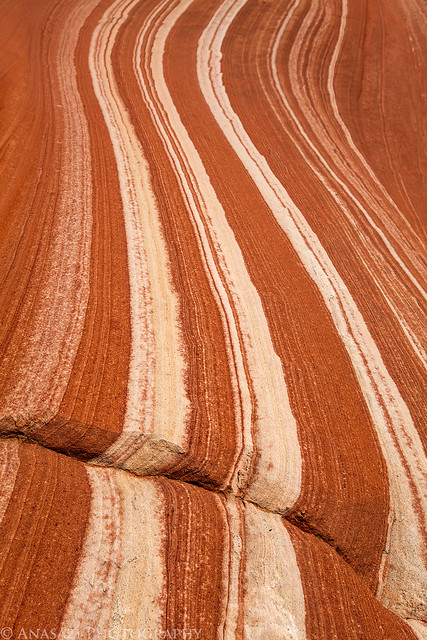 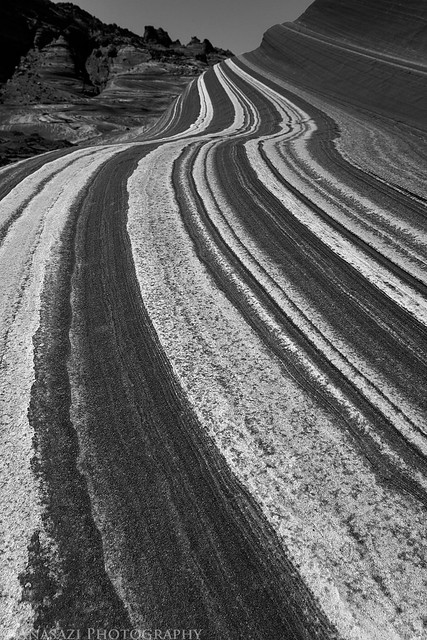 There were plenty of these strange rocks around the area. 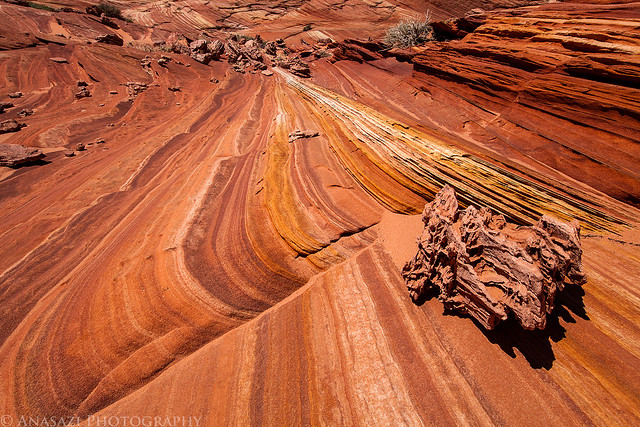 After visiting Sand Cove, I hiked back to where Amanda was sitting and rested in the shade for a while. The rest of the afternoon was spent resting in the shade and wandering around photographing the area as the sun sank lower in the sky. 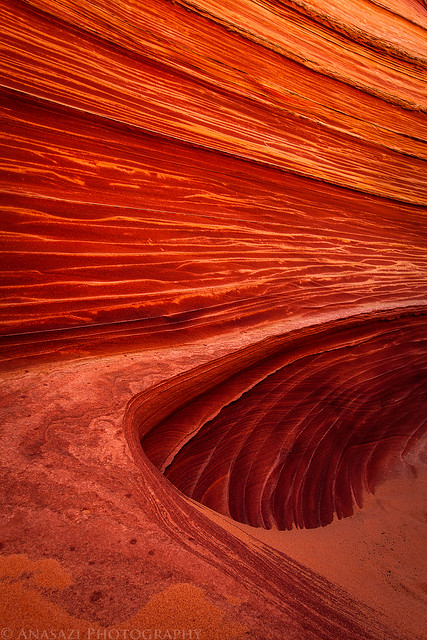 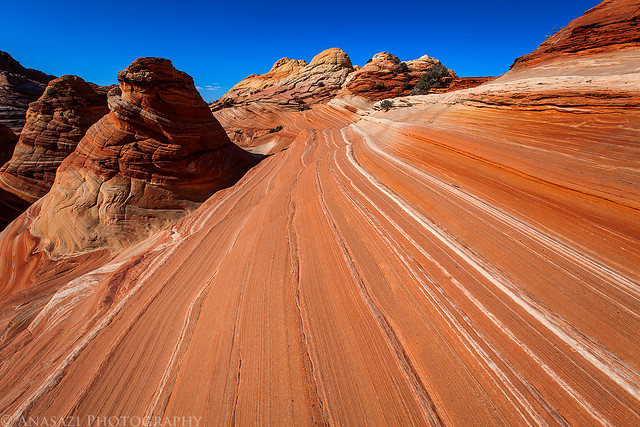 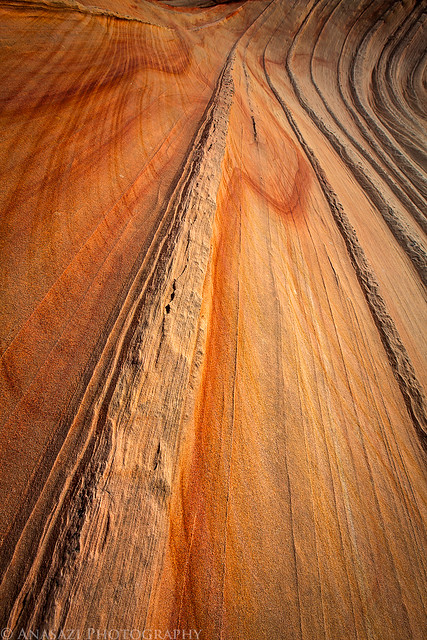 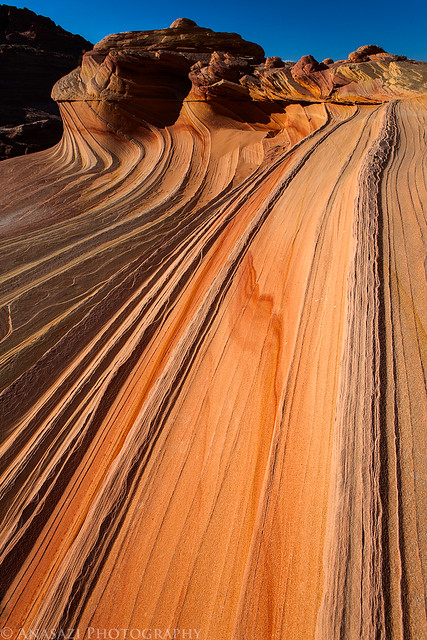 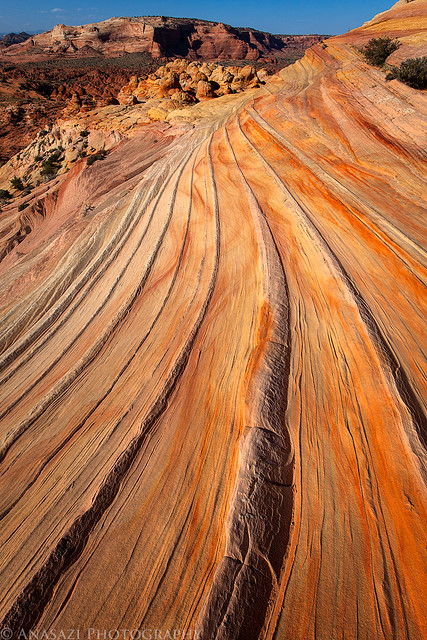 Before staring the hike back to my Jeep, we stopped for a quick photo of our shadows. 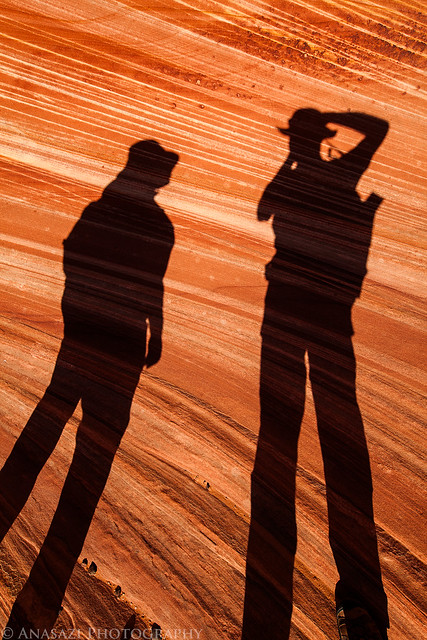 We reached the Wire Pass Trailhead again just as it was starting to get dark out. There were a lot less vehicles parked here now! We drove back to camp and had a late dinner. It had been a long day so we quickly fell asleep shortly after.

When we woke up on Sunday morning, we had our breakfast and then broke down camp. Our destination today was Shiprock, New Mexico so that we could photograph the Annular Solar Eclipse. But before leaving for New Mexico, we planned to hike Wire Pass to Buckskin Gulch. We drove back to the Wire Pass Trailhead where the lot was pretty full again, but not as bad as on Saturday, and started the hike. Apparently this is a popular hike in May since we ran into quite a few people along the way.

There was some nice reflected light as we hiked through the slot canyon. I stopped and setup my tripod for a few photos… 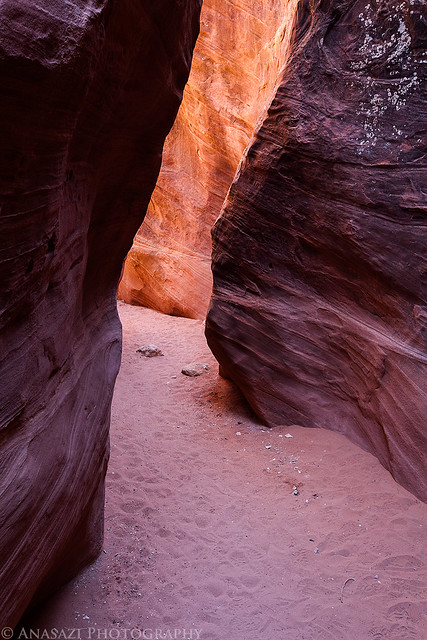 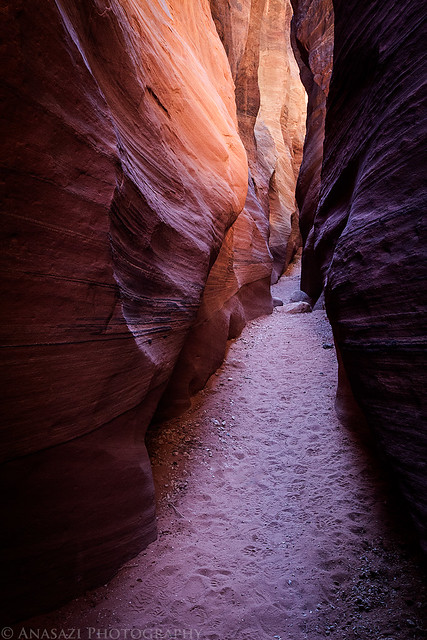 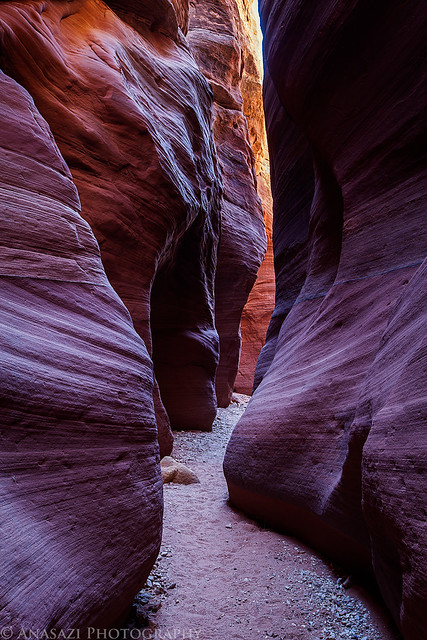 There were even a few petroglyphs near the confluence with Buckskin Gulch. 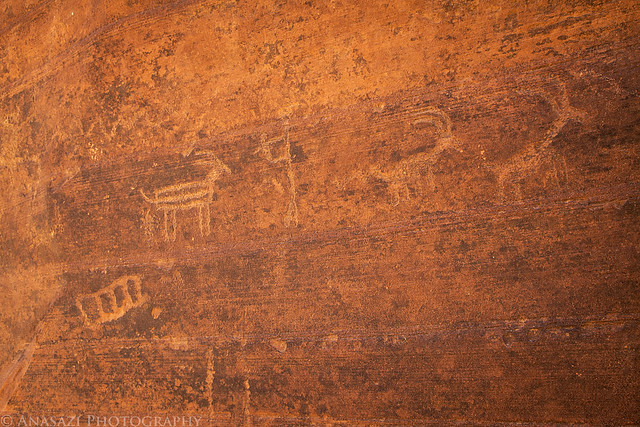 These were my favorites. 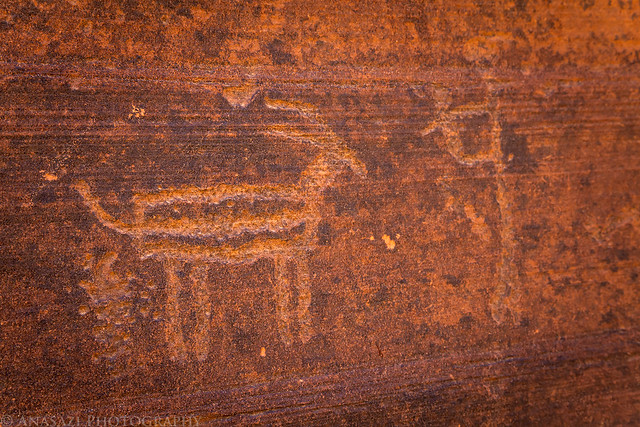 As I was photographing the petroglyphs, a number of people who were hiking also stopped to look. Unfortunately, these people apparently didn’t know the proper etiquette since the first thing they did was start running their fingers and hands all over the petroglyphs! I’ve never seen so many people just walk up and start touching petroglyphs before! I spoke up and nicely explained to them why they shouldn’t be touching them, and thankfully they understood and stopped.

From the confluence I hiked a little way up Buckskin Gulch. 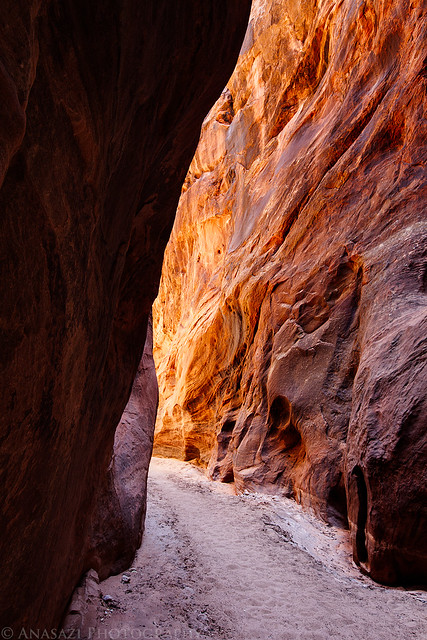 After hiking back out to the Jeep we drove back to Page and had some lunch at Denny’s. Then we continued the drive over to New Mexico. When we reached Shiprock I headed south of town a bit and pulled off the highway on a dirt road a little way. We had arrived just in time, as the solar eclipse had just started. I got my camera and tripod setup and started taking photos. It was an amazing experience to watch the eclipse progress.

The Ring of Fire when the moon was centered in the sun. It was pretty cool. 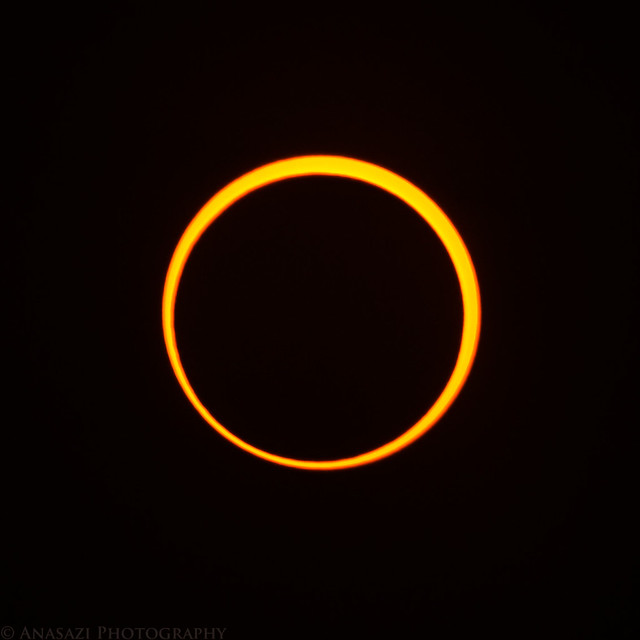 The partially-eclipsed sun sets behind the Carrizo Mountains 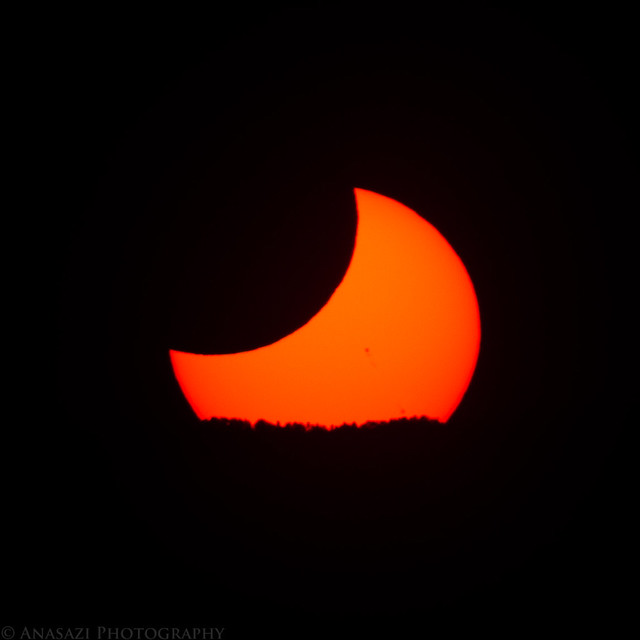 Shiprock in silhouette just after the sun had set. 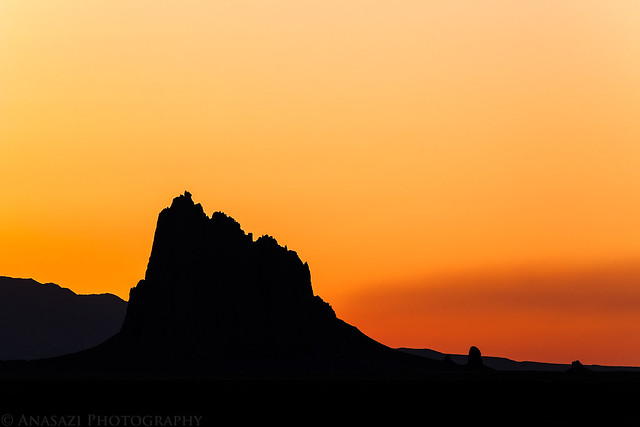 Here’s a composite of the different phases of the Annular Solar Eclipse. 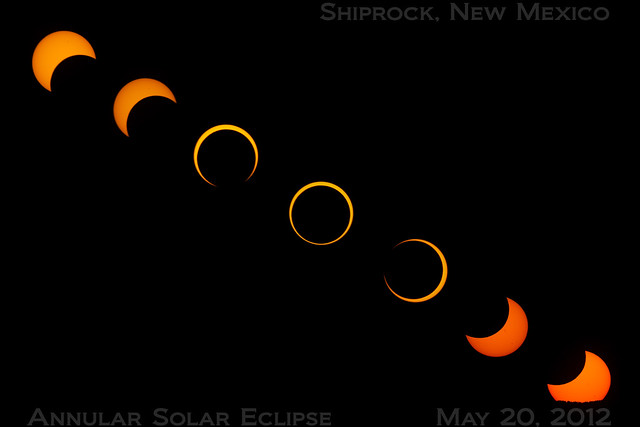 Once the sun was down and the light had faded, I packed up my camera gear and started the drive back home. We made a quick stop in Cortez for a late dinner and then drove straight through the rest of the way. We ended up getting home around 2:00am and went right to bed. Luckily, I had planned ahead and told my work that I would be getting in late on Monday so I could sleep in a little. It was a fun weekend spent exploring, camping and photographing with Amanda.