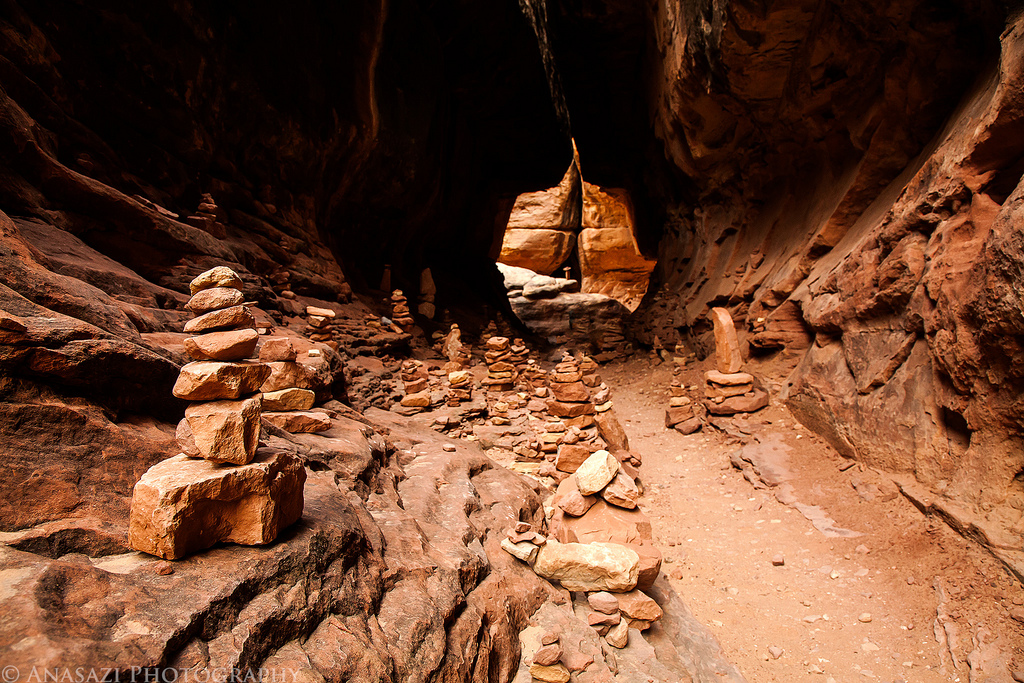 Bright and early Saturday morning I was up and headed to The Needles District of Canyonlands National Park to meet up with a few friends for the Memorial Day weekend. I made pretty good time and was soon on my way over Elephant Hill and at our campsite in Devil’s Kitchen. It took me just under four hours to reach the campsite from my house in Grand Junction. I quickly setup my tent and we were soon on our way to start hiking and exploring.

We started out by searching a new area of Devil’s Lane hoping to find something new. We did end up finding a few small panels of handprints which seem to be very common in The Needles. 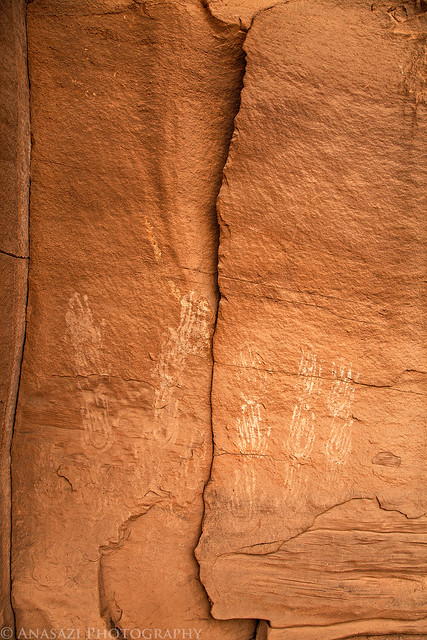 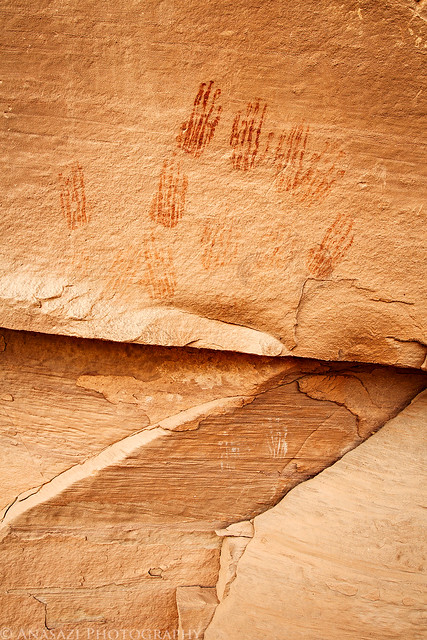 After taking a few photos of the handprints and searching the area a little more we started our hike from Devil’s Lane over to Cyclone Canyon. I should mention that it was VERY windy out! As we started the hike in the Devil’s Lane we had to watch out for rolling tumbleweeds blowing through the grabens. It was a sight to see tumbleweeds racing down the lane. The sky was also full of dust for much of the day blocking the sunlight.

The view down into Cyclone Canyon as we started the descent. 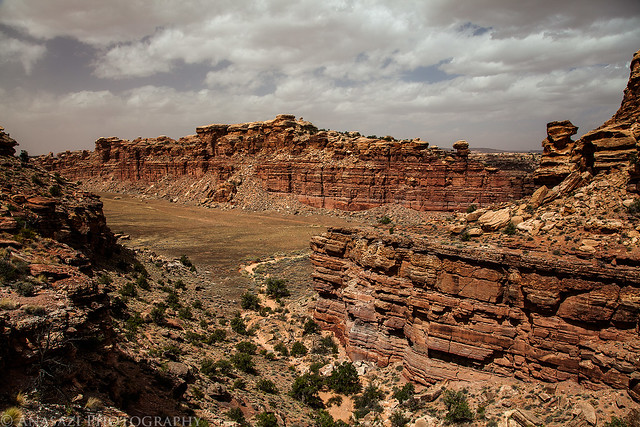 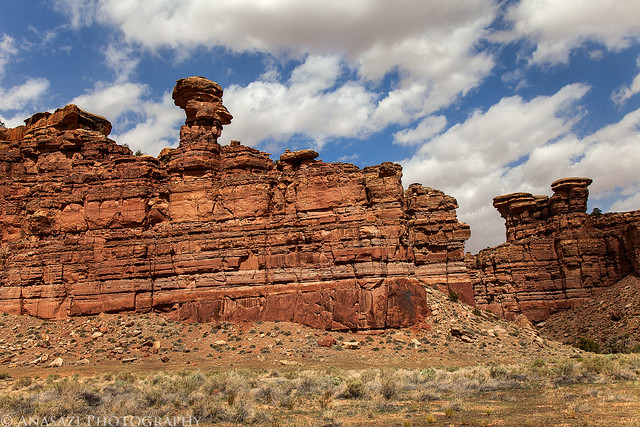 We did manage to find one very faint petroglyph panel that contained a few Barrier Canyon Style figures, but they were really hard to see. Look closely at this photo and see if you can make them out… 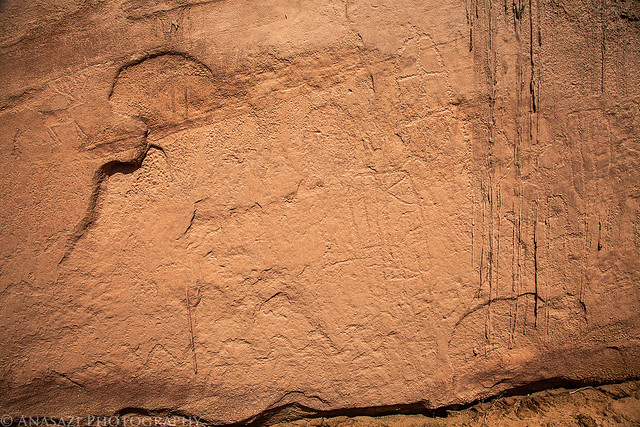 Here’s a view down into Devil’s Lane from our hike back over. You can see the wind picking up the dust off the road in front of the Jeep that is down there. 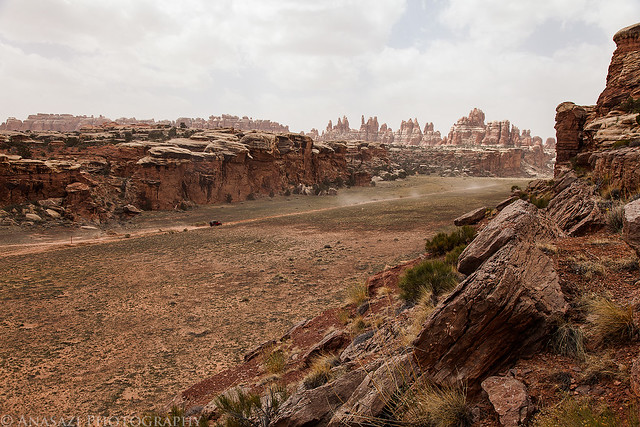 After we arrived back at my Jeep, we went off in search of another pictograph panel that I have searched for in the past without success. This time we were able to find it, though. The Cave of 200 Hands is a shallow alcove that contains many handprints and other figures. I did not count all the handprints to see if there were really 200 😉 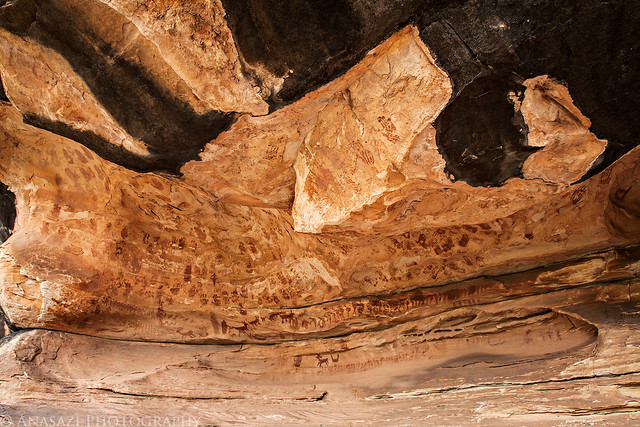 There were handprints everywhere! 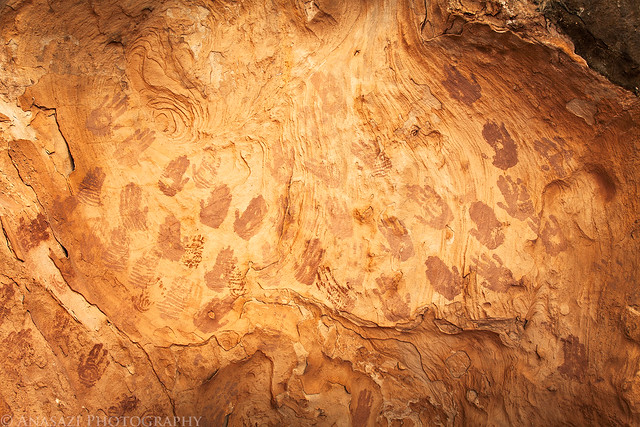 There were even a few lines of figures in a procession with burden baskets. 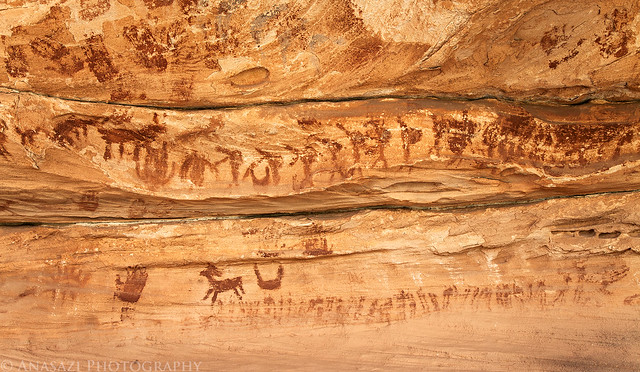 Another look in the alcove. 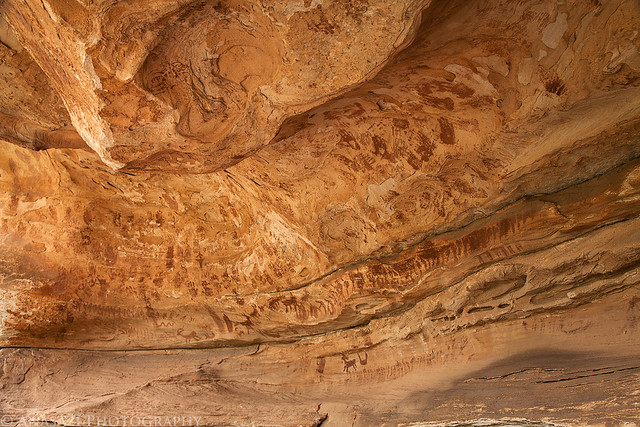 We also found an very cool panel nearby. The trapezoidal anthropomorph with the square head is my favorite. 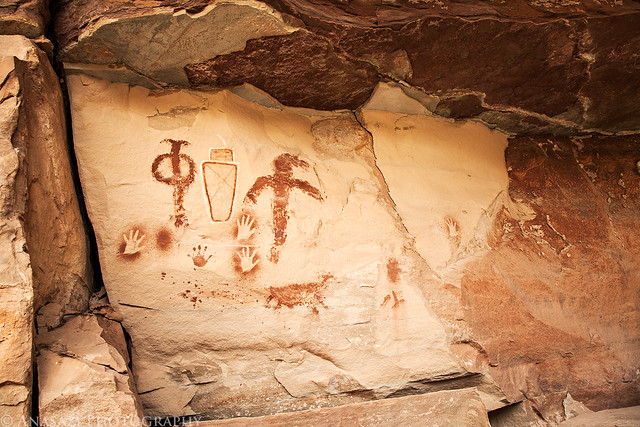 A closer look at the anthropomorph and the reverse handprints. 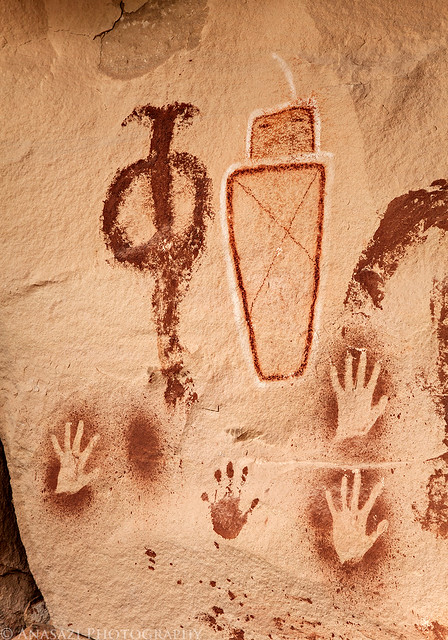 We found quite a few more faint pictographs nearby, but most were hard to see with the naked eye, let alone with a camera. Here’s one of the better figures I was able to get a photo of. 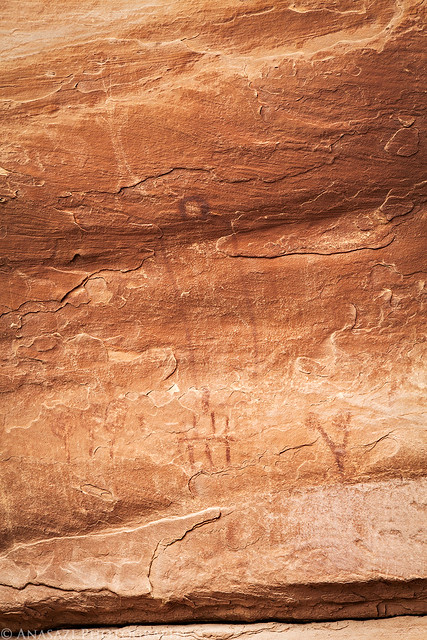 When we were done searching for new rock art, we headed over to the Joint Trail for a nice afternoon hike. There were plenty of cairns in the Cave of Cairns this time. Apparently the park rangers hadn’t been by to knock them down recently… 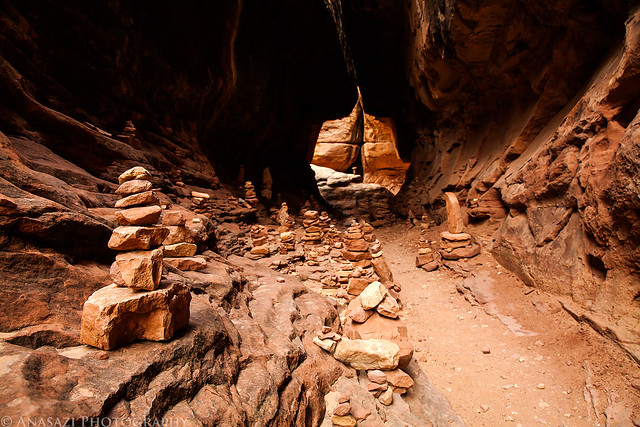 Unfortunately, the Joints seemed to be funneling the wind, so it was like walking through a wind tunnel with sand… 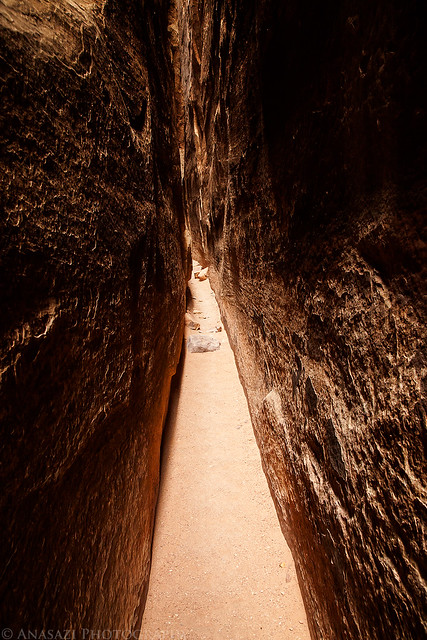 When we reached Chesler Park, we sat down on the rocks and rested for a while. There was so much dust in the air that we could barely see the needles around us, so I didn’t bother taking any photos this time. When we were done resting we hiked back through the Joint Trail and made our way back to Devil’s Kitchen so we could have some dinner. While we were back at camp the wind finally started to die down and the sky started to clear out a little bit. When I was done eating I hiked out to explore Devil’s Pocket on my own until sunset.

I managed to find a small Barrier Canyon Style pictograph panel as I was out exploring. 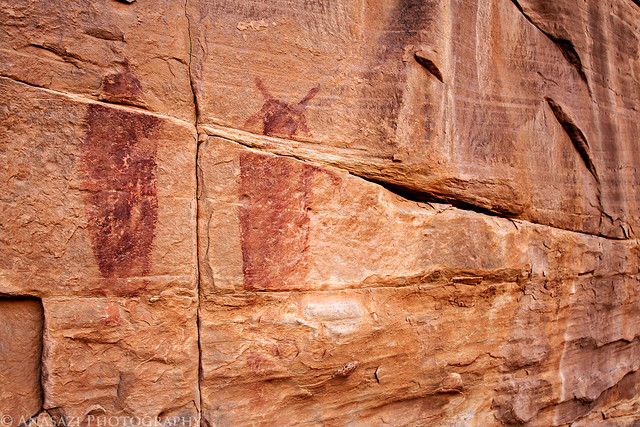 A view near the Devil’s Pocket campsite as the sun sunk lower on the horizon. 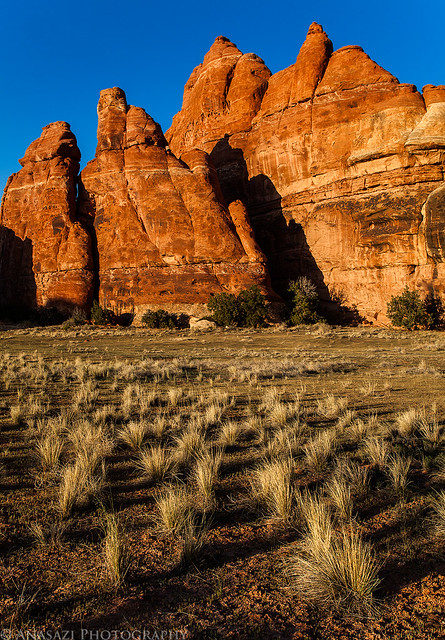 The sky was clear and still a little dusty, but the light on these spires was nice. 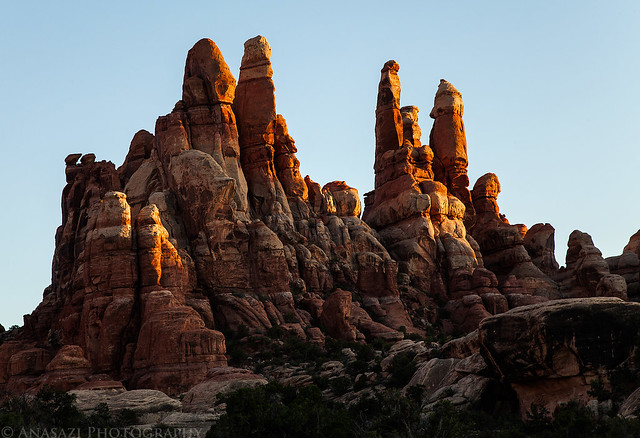 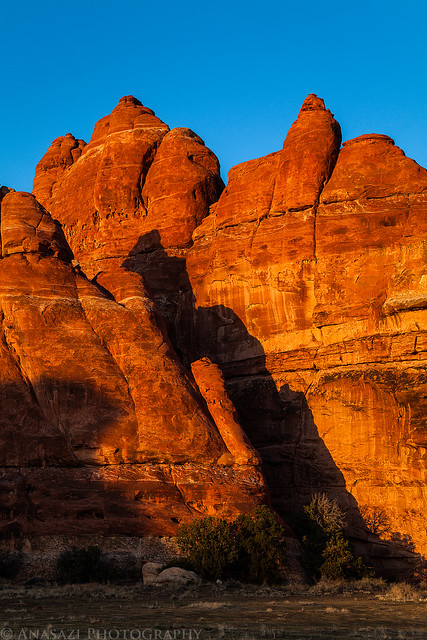 As I was hiking back to camp at Devil’s Kitchen, the light was striking the sandstone nicely. If you look closely you can see two people on top of one of the rocks. 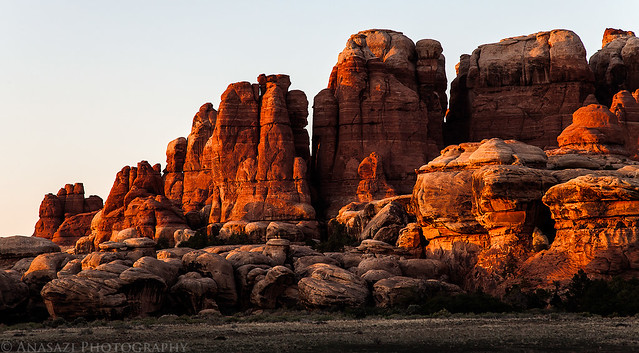 Once it was dark enough out, Jared and I tried some night shots. None of them really turned out good, but here’s one anyways since I stayed up late to take it. 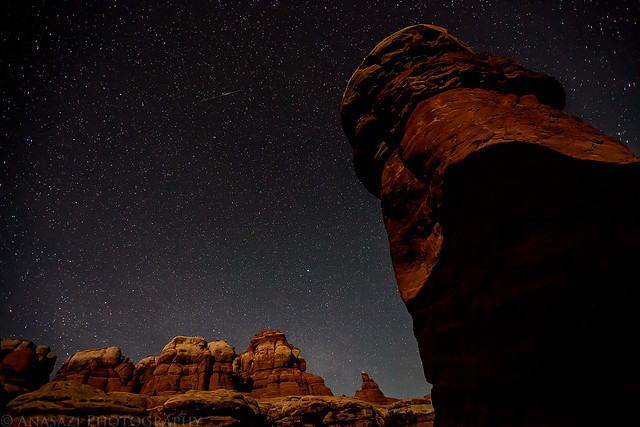 It was a great first day exploring in The Needles again.