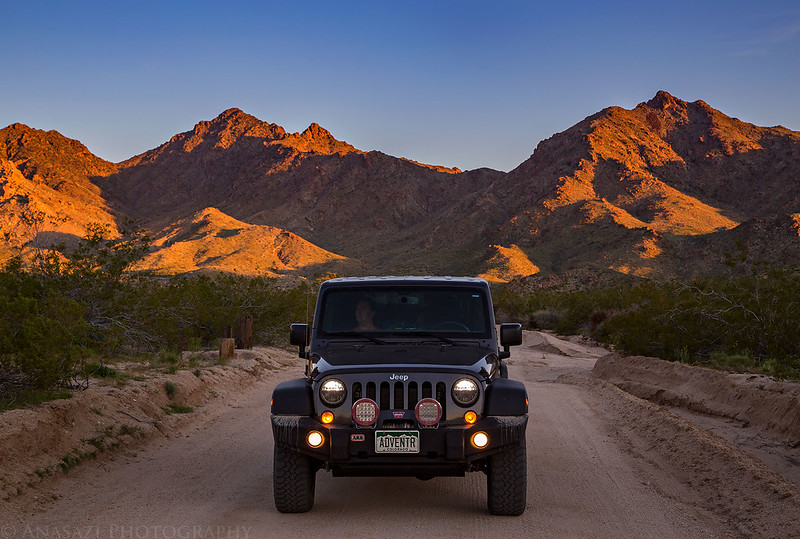 A sunrise drive through the Newberry Mountains on Christmas Tree Pass Road.

Grapevine Canyon lies within the boundaries of Lake Mead National Recreation Area and is located just south of Spirit Mountain, which is the highest peak in the Newberry Mountains. Rising to an elevation of 5,639 feet, Spirit Mountain and the surrounding canyons are sacred grounds for the Yuman speaking tribes of the lower Colorado River. The mountain plays a prominent role in the religion and mythology of these people. They believe the mountain is the spiritual birthplace of the tribes.

Sunrise in the Bridge Canyon Wilderness. 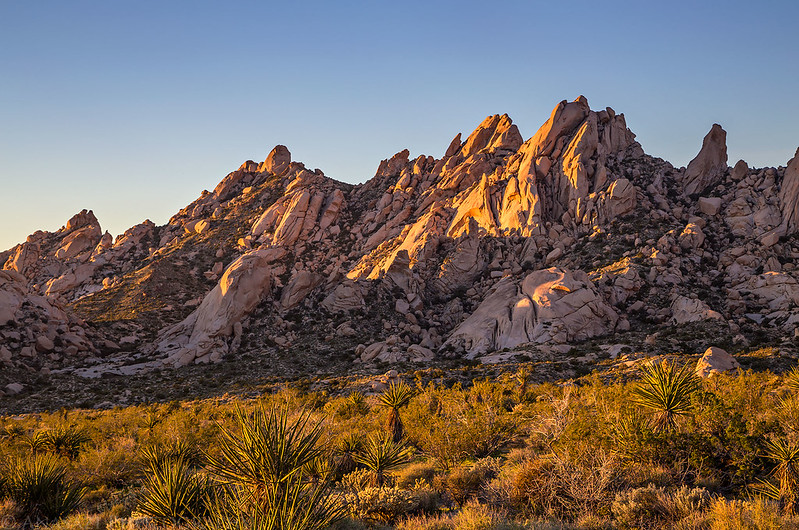 As the sun was rising my Jeep kicked up some dust and created this scene behind us. 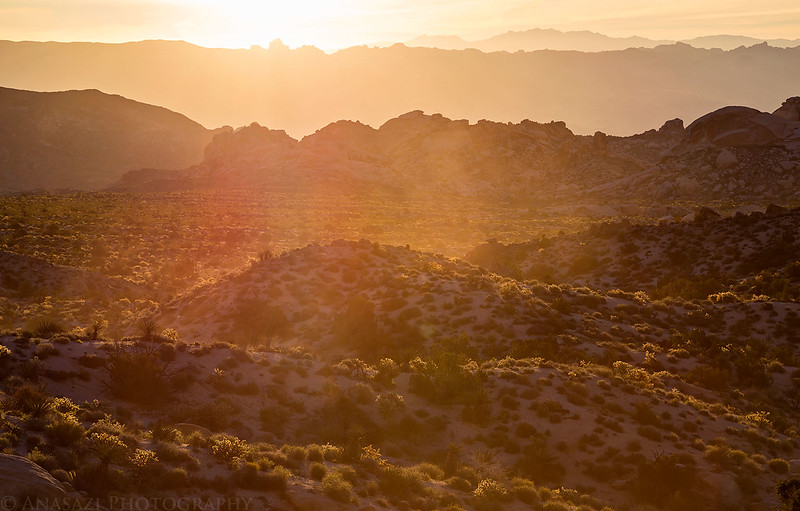 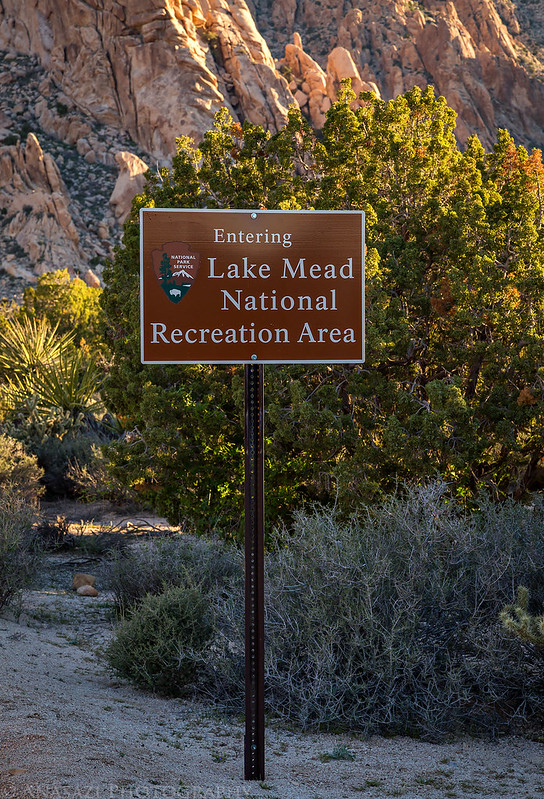 Heading back down to the trailhead for Grapevine Canyon with the flanks of Spirit Mountain in front of us. 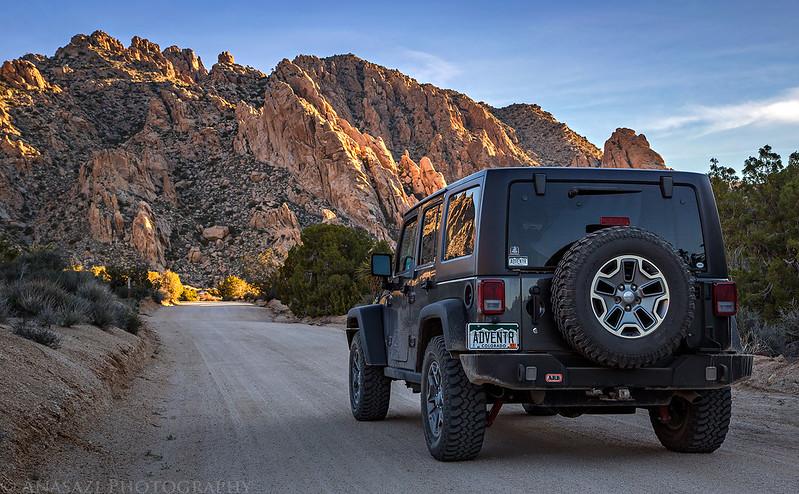 A morning view down Sacatone Wash. 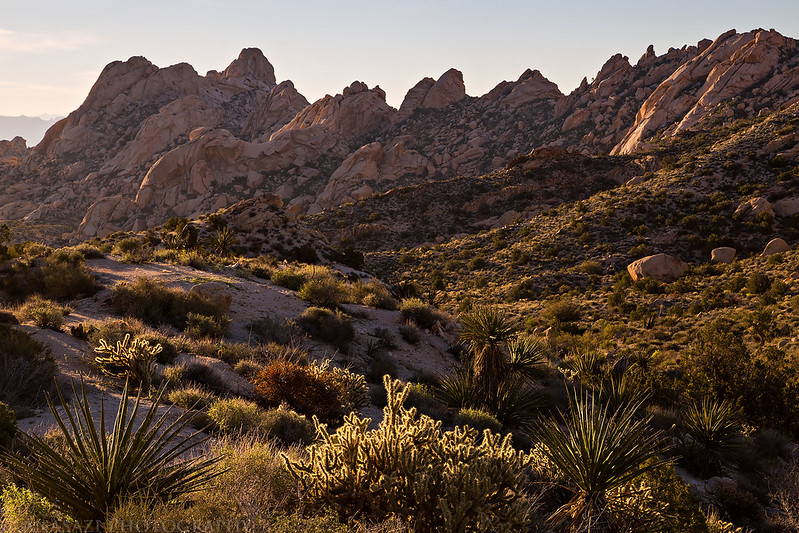 After returning to the Grapevine Canyon Trailhead we hiked up the wash a short distance to the mouth of the canyon where we found a clear and cold running stream flowing out of the canyon from a spring located further up. It’s definitely a nice oasis in the desert and it’s not surprising that there is a lot of rock art found at this location. 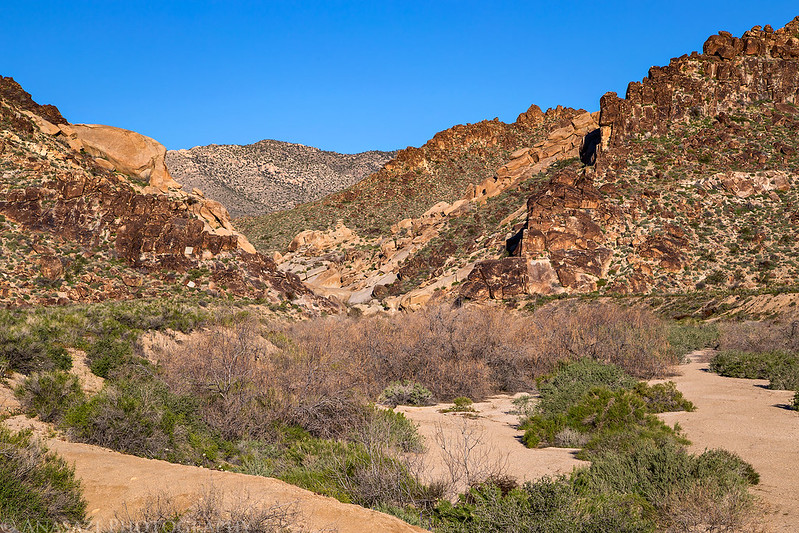 When we reached the mouth of the canyon we were amazed by all of the petroglyphs found here! We spent a lot of time exploring both sides of the canyon and found quite a few interesting designs. I was actually surprised at how little graffiti there was at this location since it’s a very accessible and well-known site and I hope it continues to stay that way!

A big wall with a lot of different petroglyph panels. 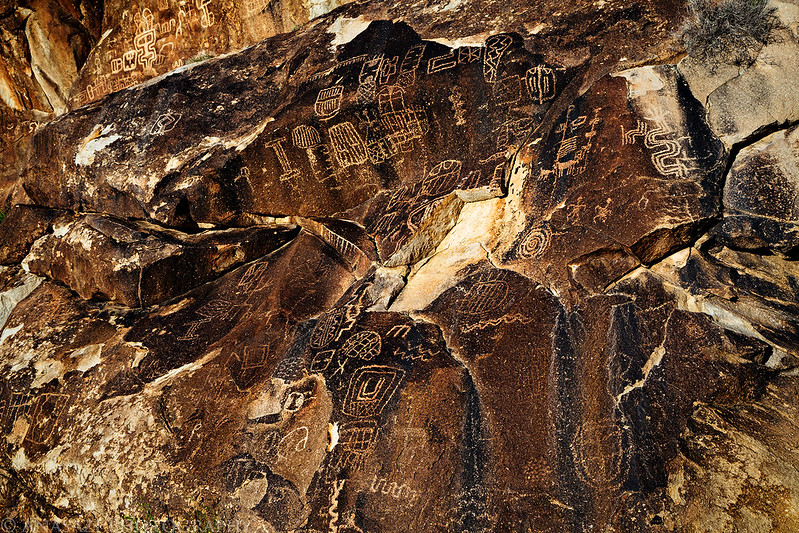 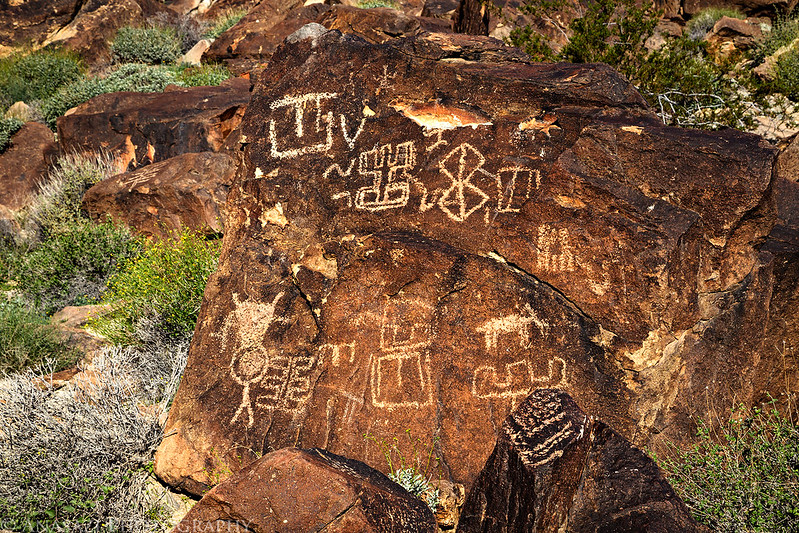 We climbed high above the mouth of the canyon following the scattered petroglyph panels and came to this viewpoint over Grapevine Canyon. 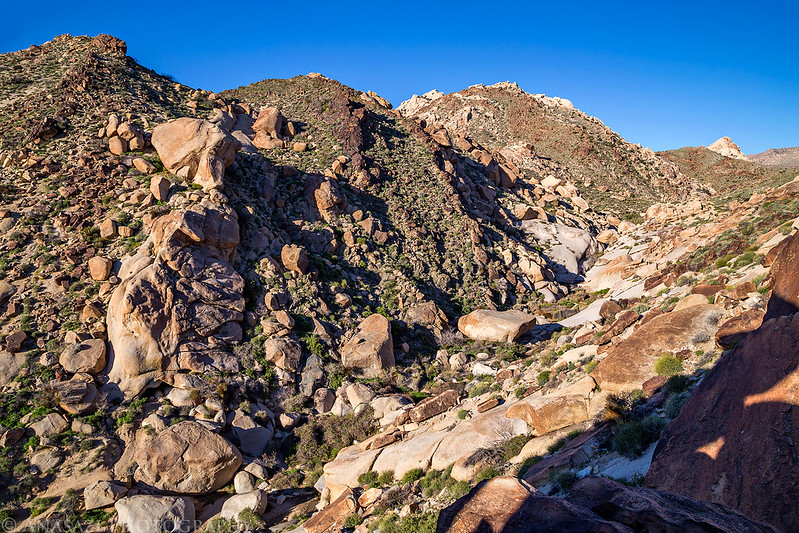 These petroglyphs were found near the overlook. 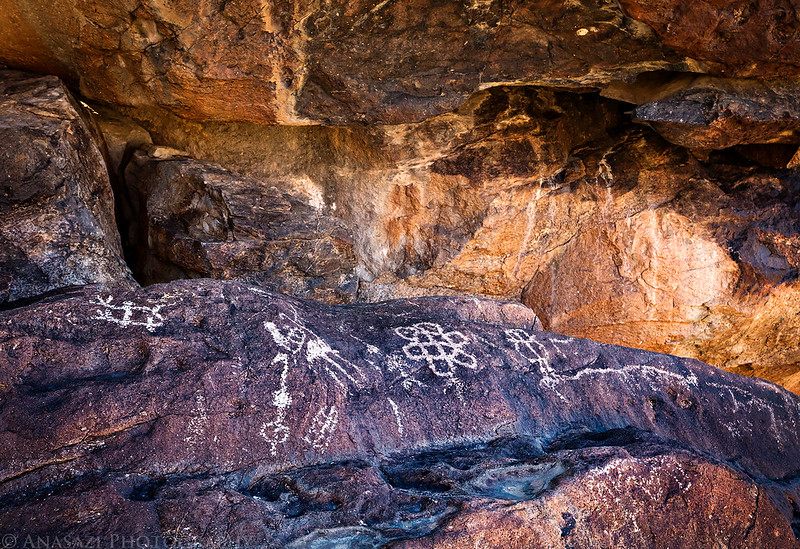 There were plenty of petroglyphs found scattered on the boulders in this area, too. 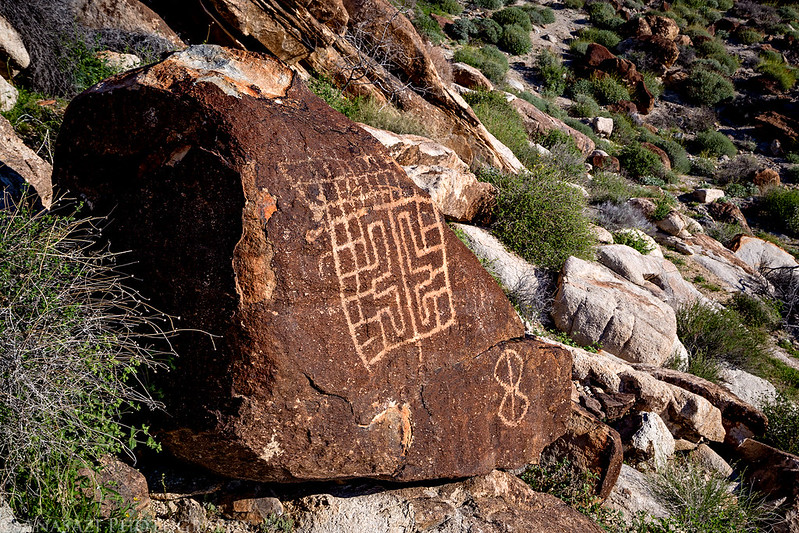 The panels closest to the mouth of the canyon were the busiest. 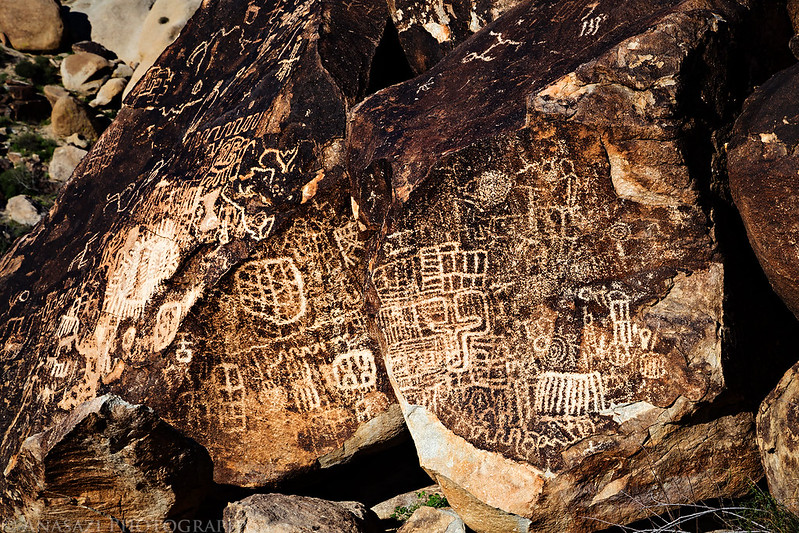 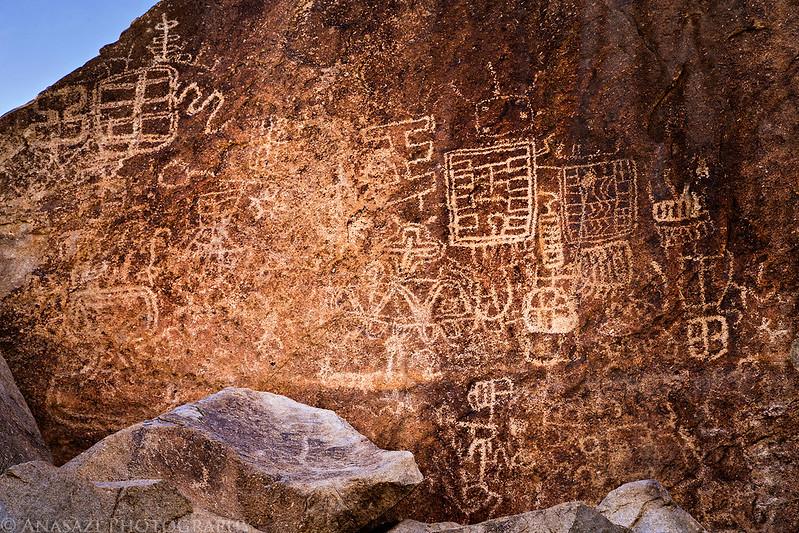 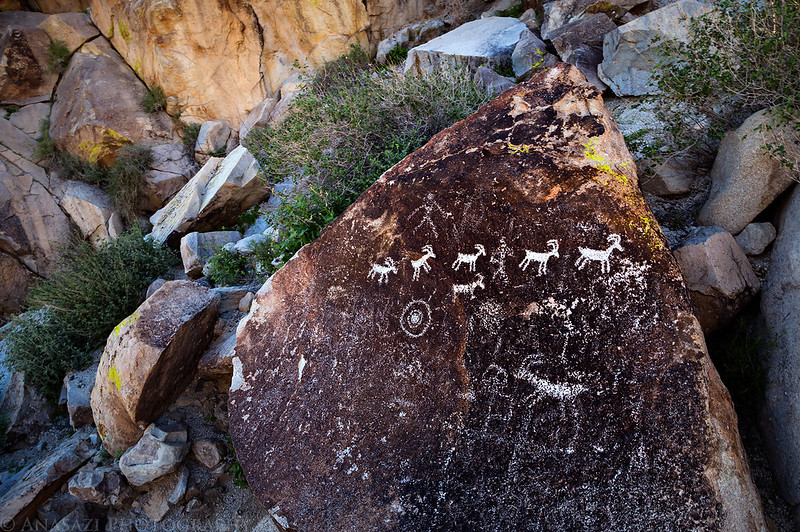 This petroglyph reminded me of the Ute shield figures I’ve found closer to home in the Book Cliffs. 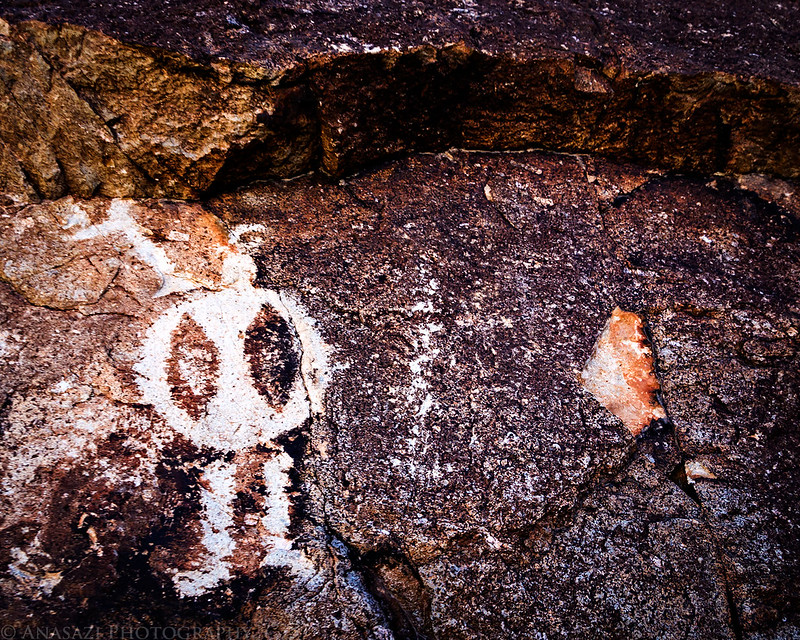 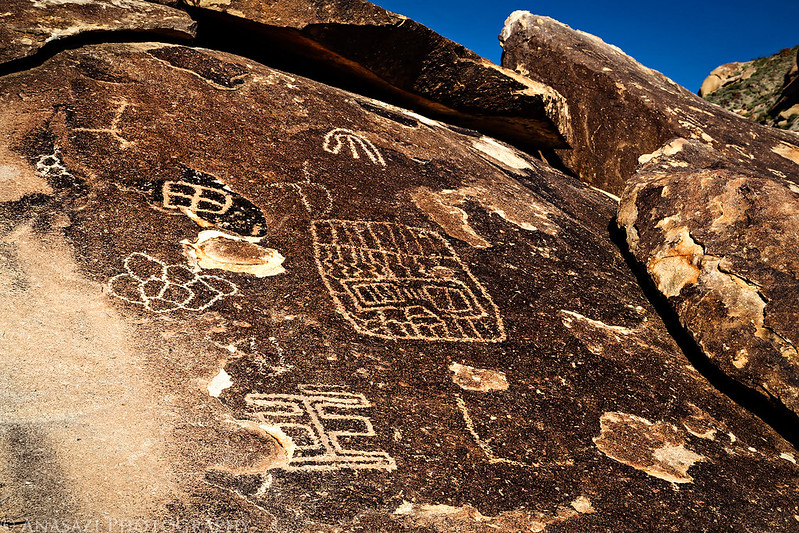 View of the panels across the canyon. 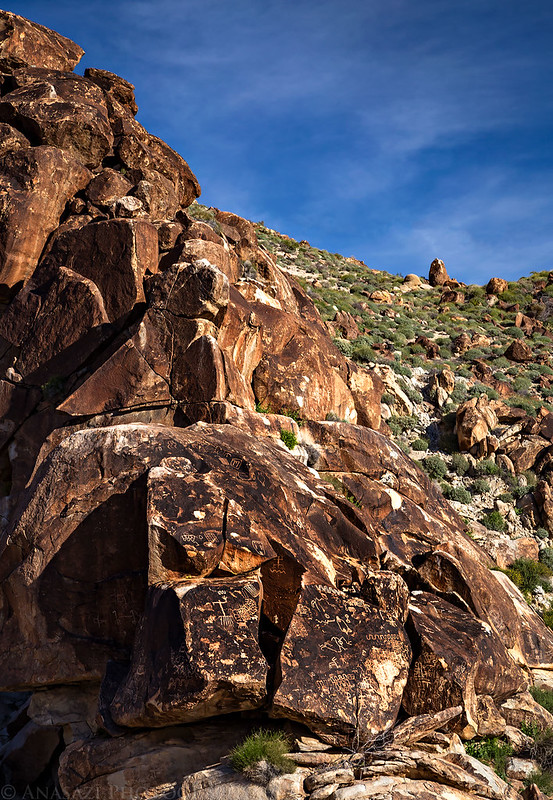 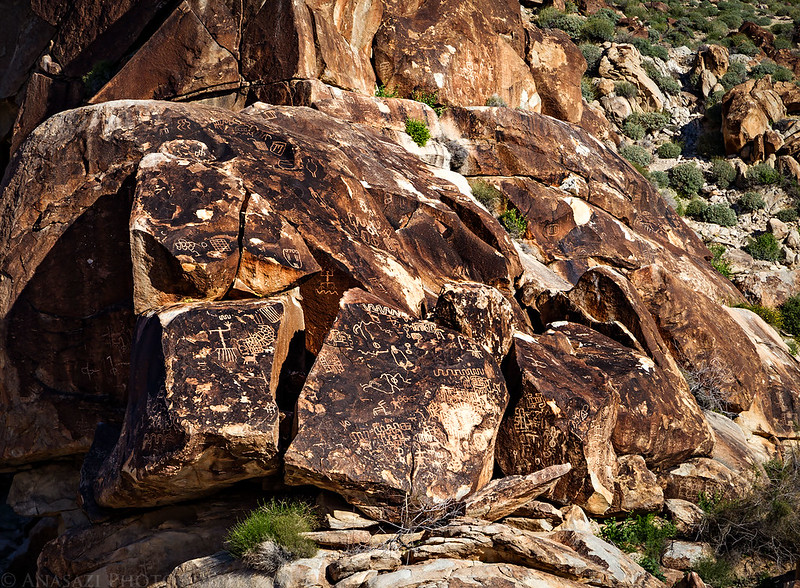 After we explored the area for a little while I started to climb up a series of ledges and boulders for a better view of some of the higher petroglyphs. After stepping onto the top of a large boulder next to a ledge I was startled by a rattlesnake near my feet that rattled at me. I couldn’t easily turn around and step back from the way I had just come and I didn’t really have anywhere else to go, so I ended up jumping off the boulder about ten feet to the gravel below. I landed on my feet but still had a lot of forward momentum when I struck the ground and ended up falling forwards and skinning one of my knees pretty good. I guess a skinned knee is better than a rattlesnake bite…

Diane helped me clean and bandage the wound and then I took a couple more photos before we hiked back to the Jeep. 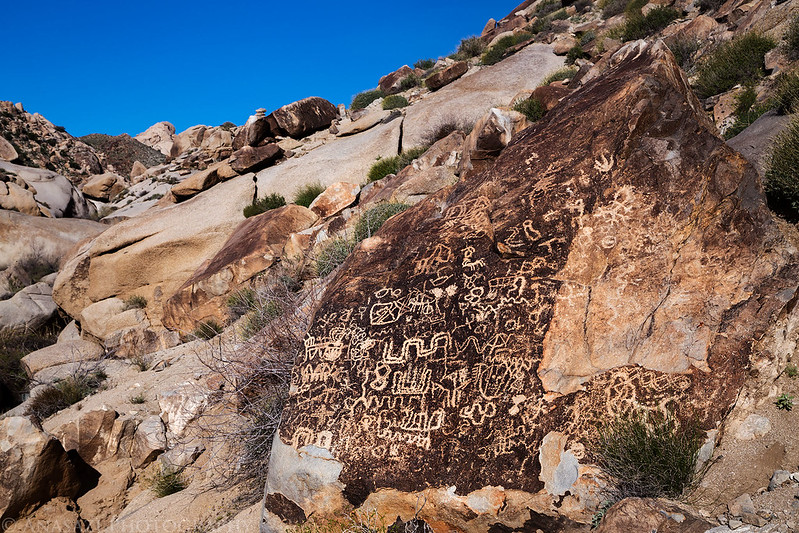 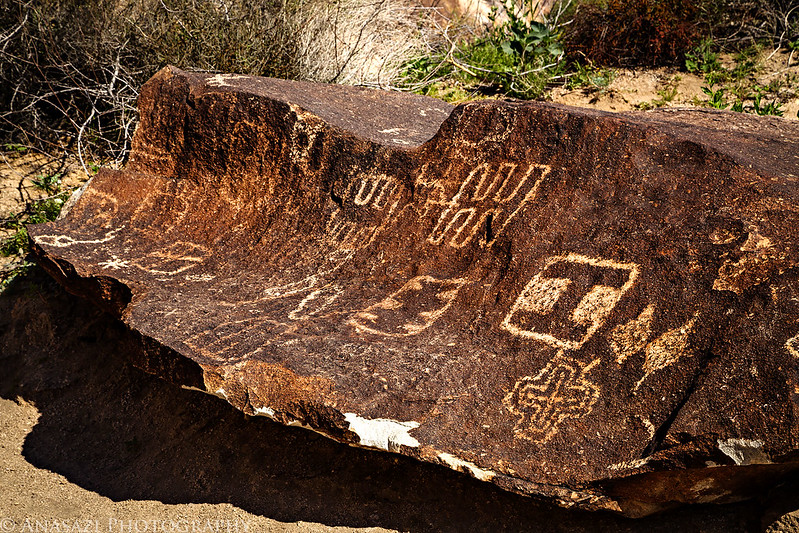 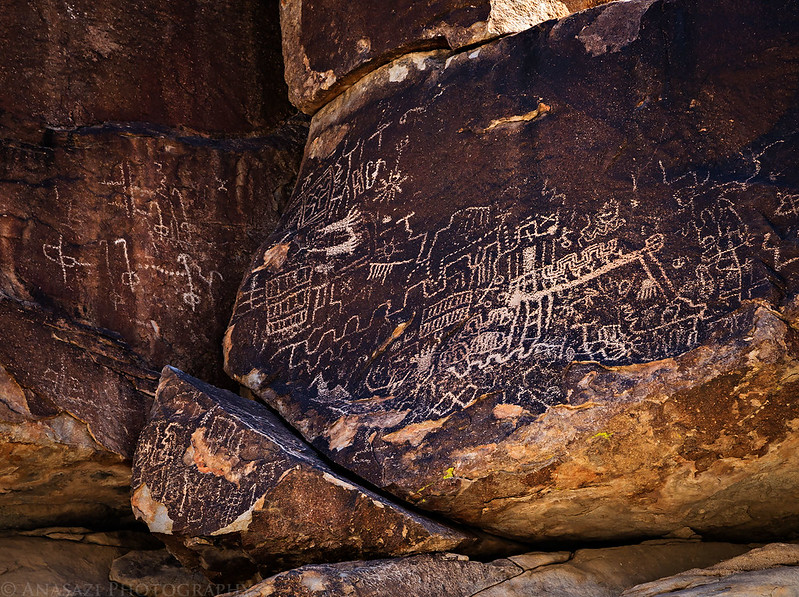 After returning to the Jeep we drove into Bullhead City and had a quick breakfast before we started the drive down to Phoenix. When we arrived in Phoenix we checked into our hotel and then ended the day with a delicious Stuffed Deep Dish Pizza from Giordano’s. It’s one of the few things I miss from living near Chicago.