Sunrise on The Crestones and Broken Hand Peak from the trail to the summit of Humboldt Peak.

I left home early on Saturday morning for the long drive to the trailhead near Westcliffe. I stopped for an early lunch in Salida and was on the trail hiking up to the South Colony Lakes before noon. The first few miles of the hike follow the old closed road that used to go up to a mine near the South Colony Lakes, which was easy walking, but pretty boring. After leaving the road the trail was quite wet and muddy in places, but more scenic as it entered the upper part of the basin. I found a nice flat site just below the lower lake and setup camp. It was a bit chilly out for this time of the day, so I ended up putting my fleece on. I do think the cooler temperatures helped keep the mosquitoes away which I’ve heard can get pretty bad in this basin. I never even had to use any bug spray on this trip!

Crossing the bridge over South Colony Creek after leaving the trailhead. 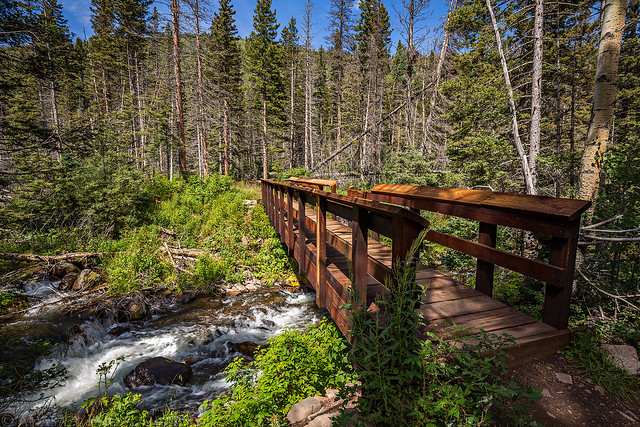 My campsite just below South Colony Lake at the base of Humboldt Peak. 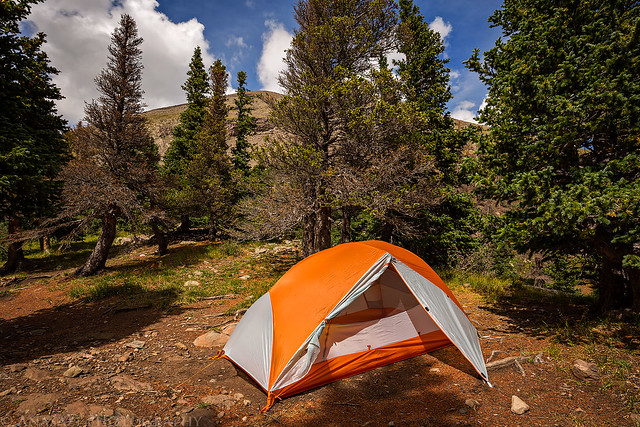 After I finished setting up camp I hiked around the lower lake and then visited the upper lake for a while. I had considered the possibility of hiking to the summit of Humboldt Peak this evening if the weather looked favorable, but it did not, so I headed back down to relax at camp and get to bed early. While I knew this was a pretty popular area, I was still surprised at just how many people were camped up in this basin. I had arrived early enough in the day that I easily found a nice campsite, but towards the evening I ran across a number of people that were having trouble finding a place to setup a tent. Shortly before sunset the sky filled with storm clouds that blocked out the sun for the rest of the evening. It started to rain around sunset with a few flashes of lightning and rumbles of thunder and would continue to rain for a little while into the night.

Humboldt Peak reflecting in a small tarn in the basin. 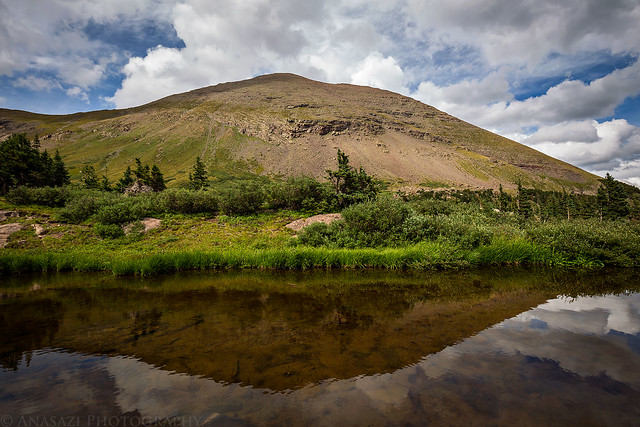 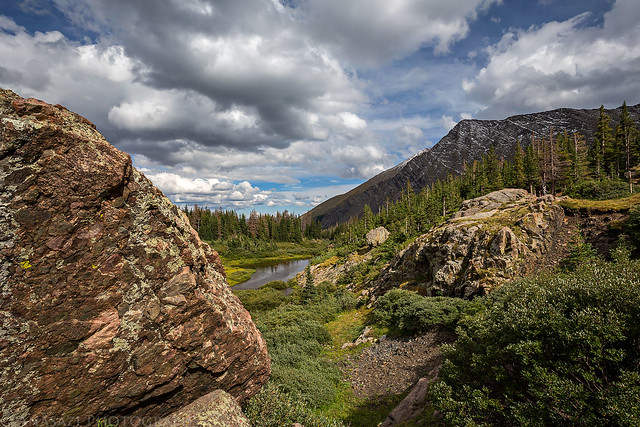 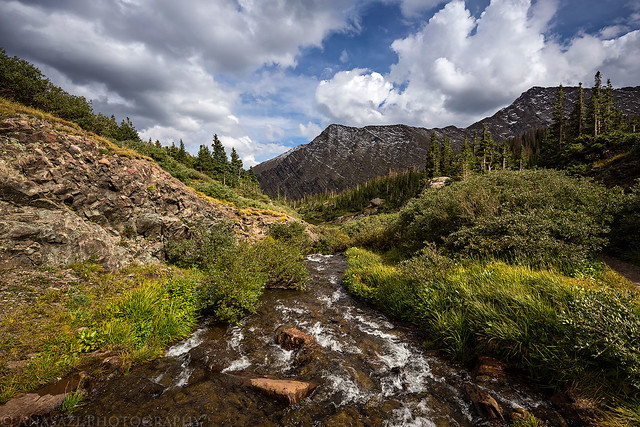 Following the trail to the upper lake. 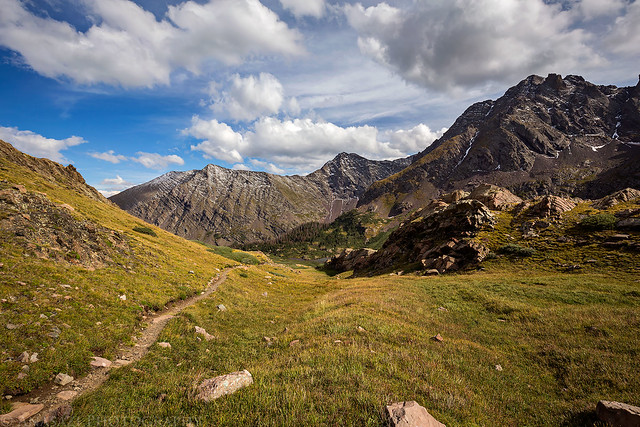 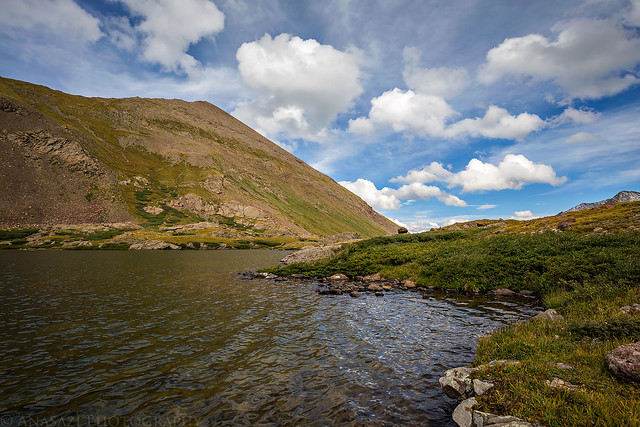 View from the outlet of the upper lake. 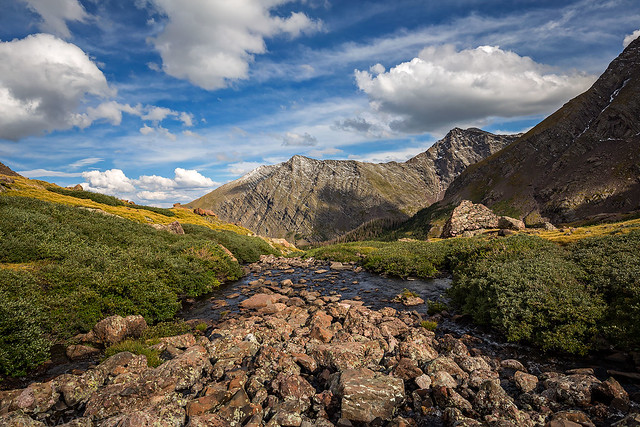 Nice spotted light as I hiked back down to camp for the evening. 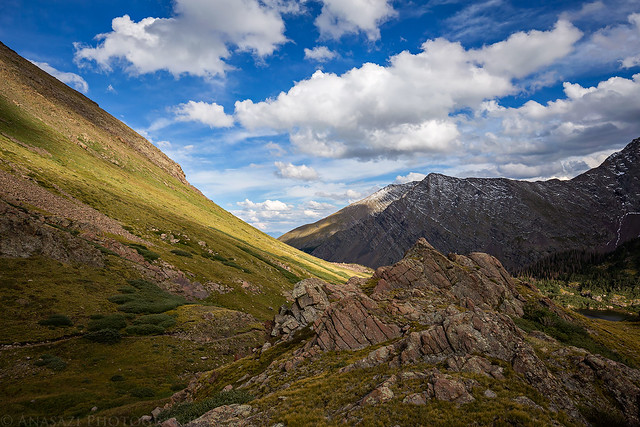 The dark clouds started to roll in shortly before sunset. 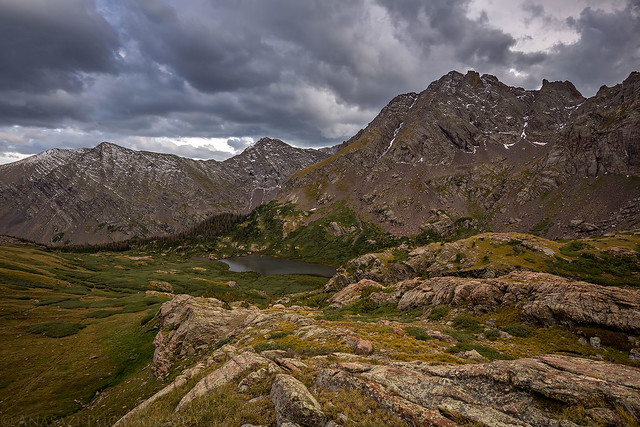 As I was trying to fall asleep for the night, I almost decided to pack up my stuff and head back down to my Jeep because I was feeling a bit nauseous and had a dull headache. I was worried that I was coming down with a touch of altitude sickness again. Thankfully, I was able to get to sleep and woke up feeling much better!

I slept in a little later than normal on Sunday morning and was on my way up the trail by 5:30am. As I hiked up towards the upper lake, I saw a long line of headlamps ascending the steep trail to Broken Hand Pass on their way to climb the nearby Crestone Peaks. I stopped to catch the sunrise from the switchbacks above the upper South Colony Lake, but there were still too many clouds to the east so it wasn’t as nice as I had hoped. From there it was a slow hike to the summit for me, but I eventually made it and enjoyed the view of the surrounding mountains. There were some low hanging clouds around by the time I reached the summit, but nothing threatening yet.

The first light of the day strikes the Crestone Needle (14,197) and Crestone Peak (14,294) as I hiked up the trail to the summit of Humboldt Peak. 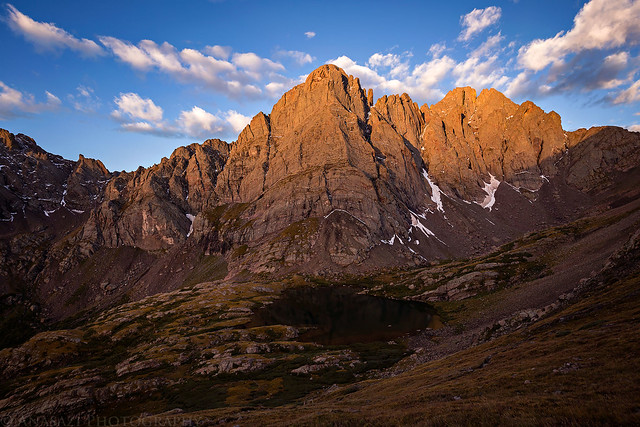 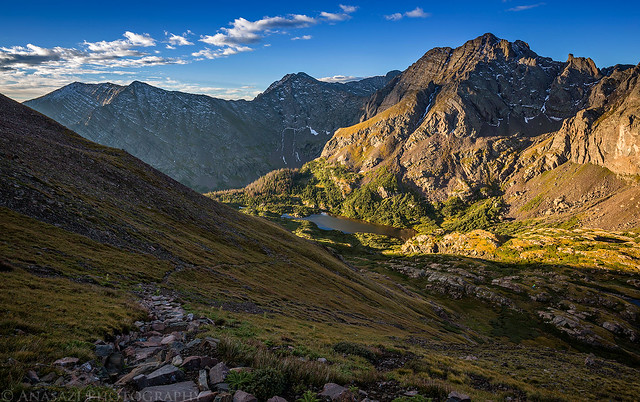 Hiking in the shadow of Humboldt Peak. 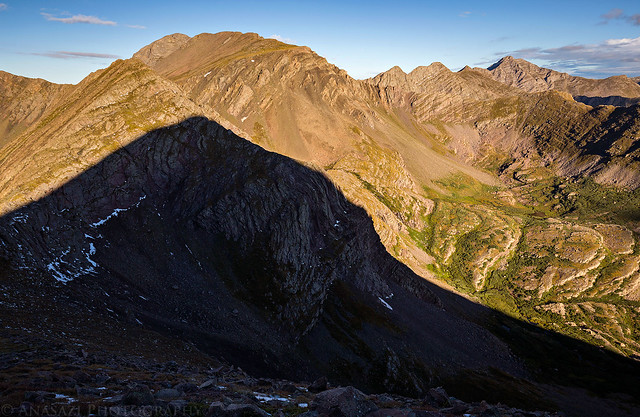 The view south of the Sangre de Cristo Range over Marble Mountain (13,266) as I climbed the West Ridge. 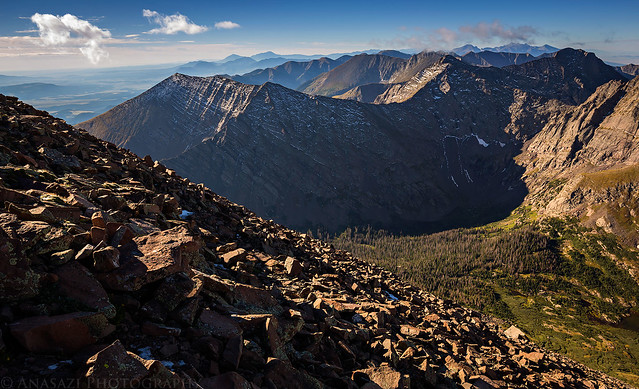 The last stretch to the summit. 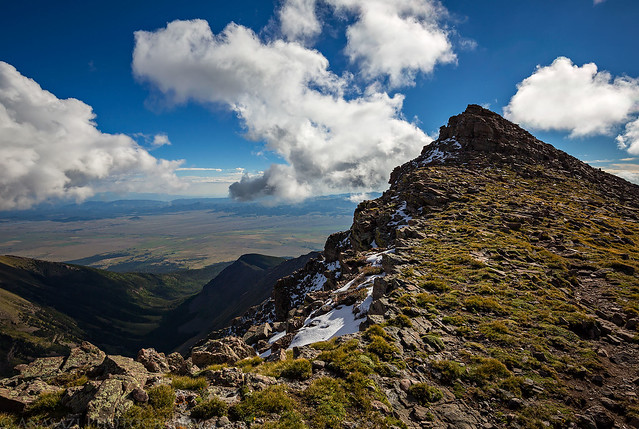 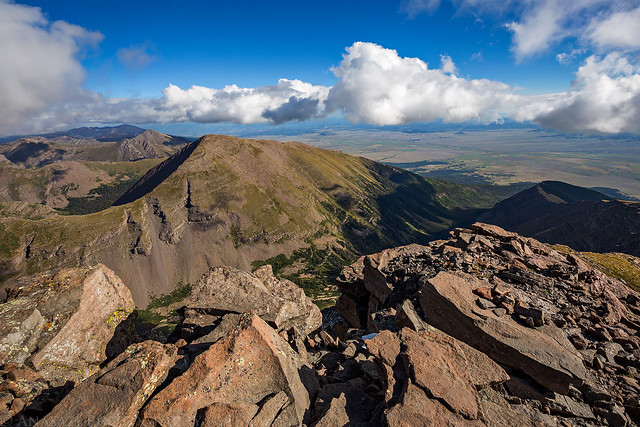 Looking back towards the false summit I hiked around with The Crestones in the clouds. 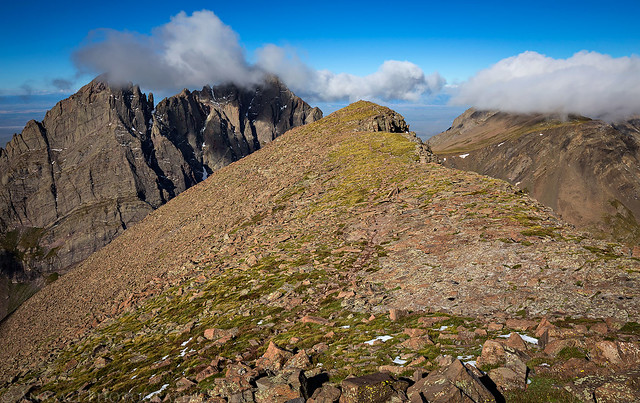 A view looking north of the Sangre de Cristo Mountains from near the summit on my way back down. 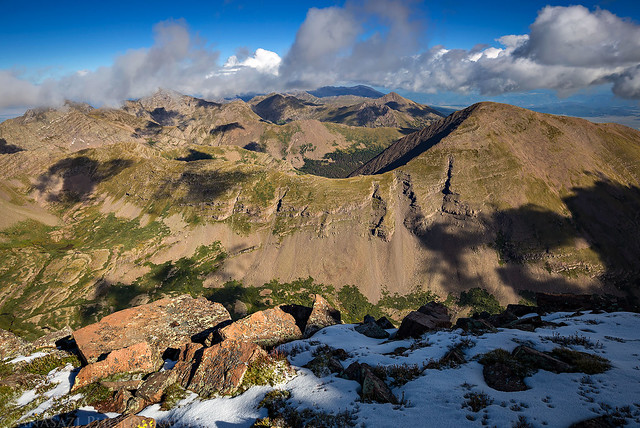 Descending back down the rocky ridge to the saddle. 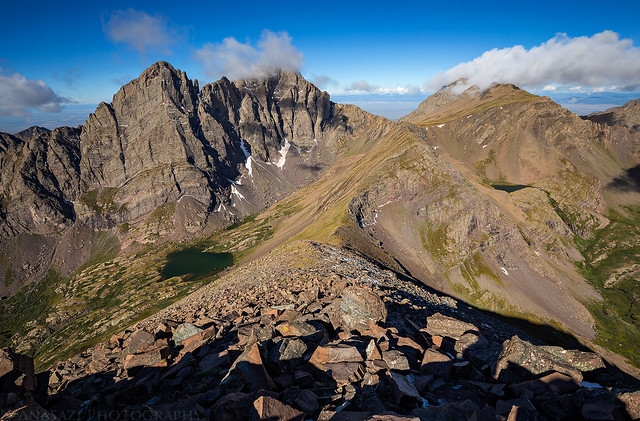 The Crestone Peaks dominated the scenery throughout the hike. 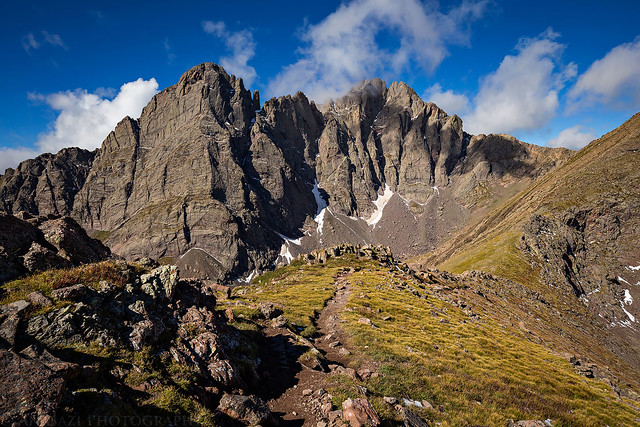 After enjoying the views from the summit I hiked back down and packed my camp back into my backpack. I made good time hiking down the old road back to my Jeep at the trailhead and had a long, but uneventful drive back home on US 50. It was a good weekend!