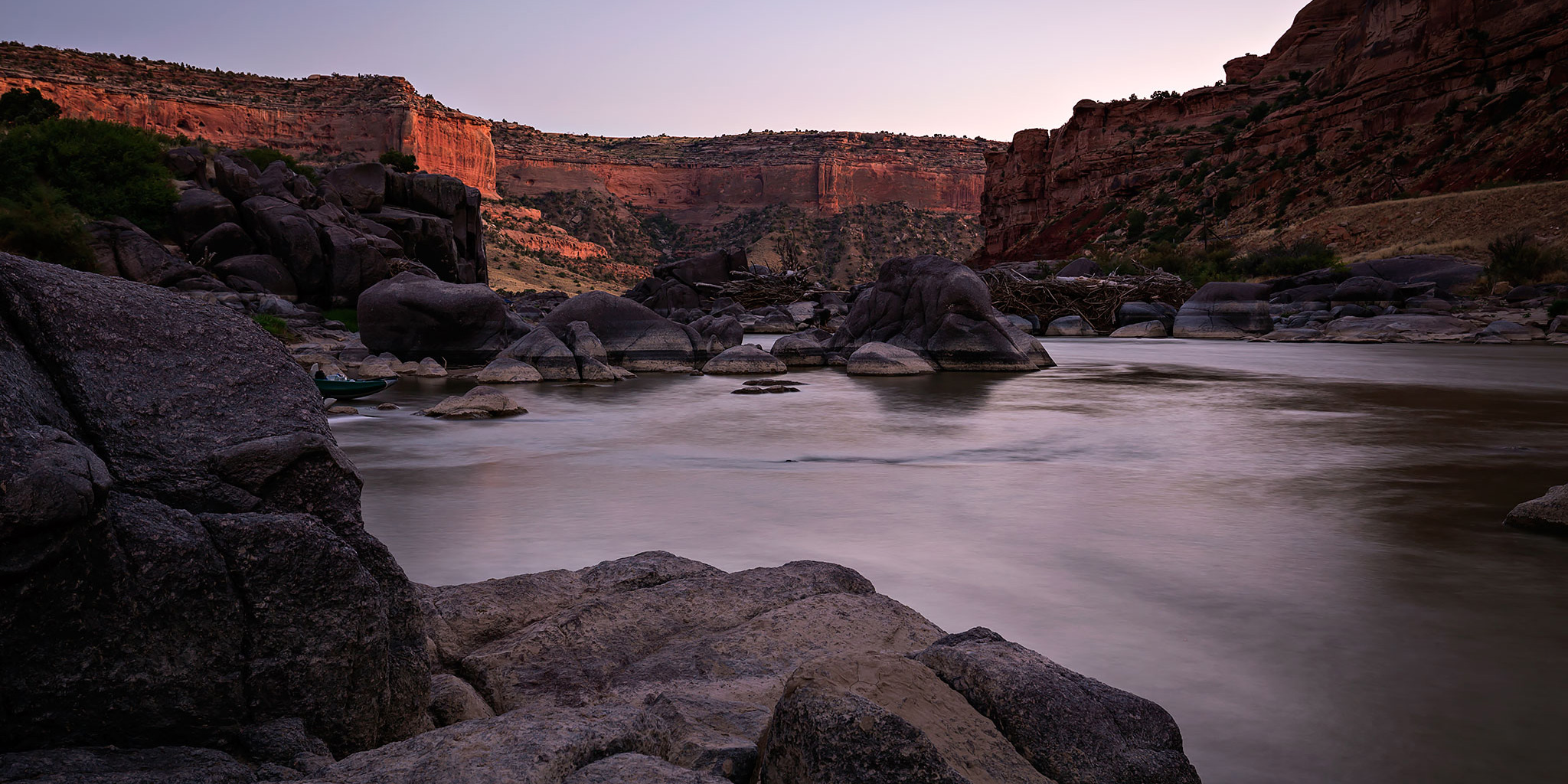 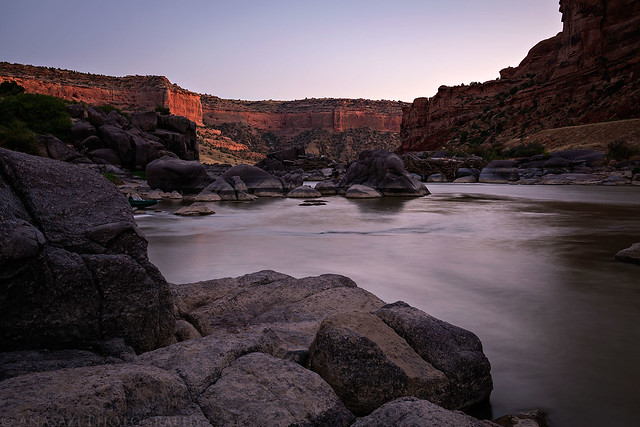 Black Rocks at dusk from our campsite along the Colorado River in Ruby Canyon.

We left work early on Friday, ran my Jeep down to the Westwater boat ramp and returned to Loma to pack up our boats and get on the river. We would spend the rest of the weekend on a nice relaxing float down the river. The temperature was great for swimming so we would spend a lot of time in the water throughout the weekend.

Loading up our inflatable kayaks at the Loma boat ramp on Friday afternoon. 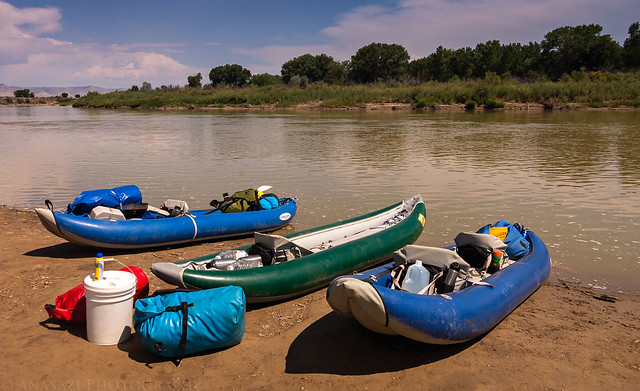 Jackson and Ken float alongside a sandstone wall as we enter Horsethief Canyon. 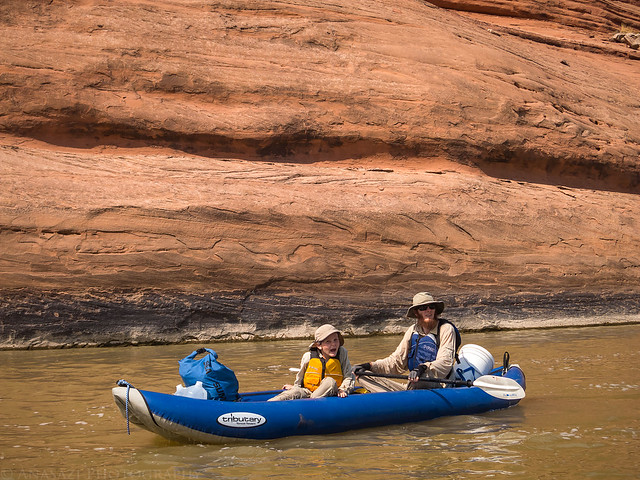 The view ahead on the Colorado River. 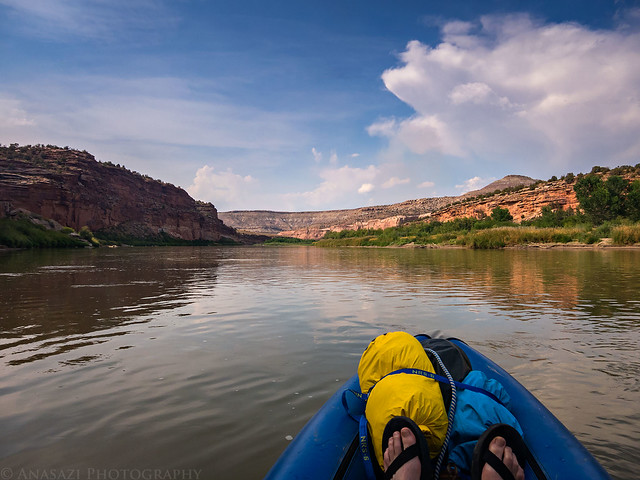 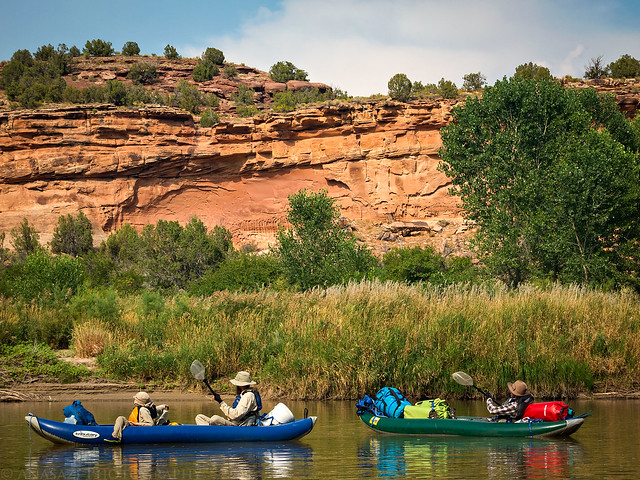 Chris seemed to enjoy the scenery. 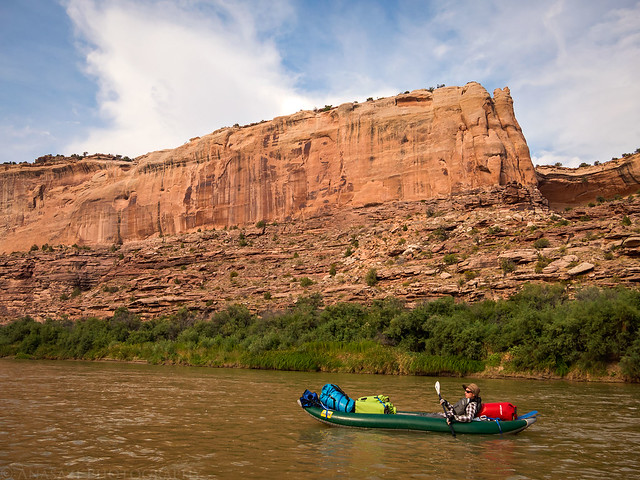 Our first night was spent at the Cottonwood 3 campsite. While it was a decent camp, the actual sites were kind of far from the river and offered little privacy from our neighbors. As soon as the sun went down the mosquitos came out in force and they were pretty horrendous. We retreated to our tents shortly after sunset and went to bed early. There were some nice canyons to explore before the sun went down, though.

When we reached camp, Ken helped bring some of their gear to the campsite. 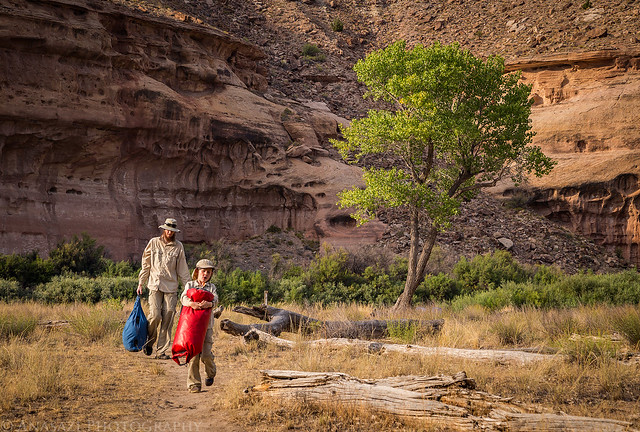 The view from the shore of Cottonwood 3. 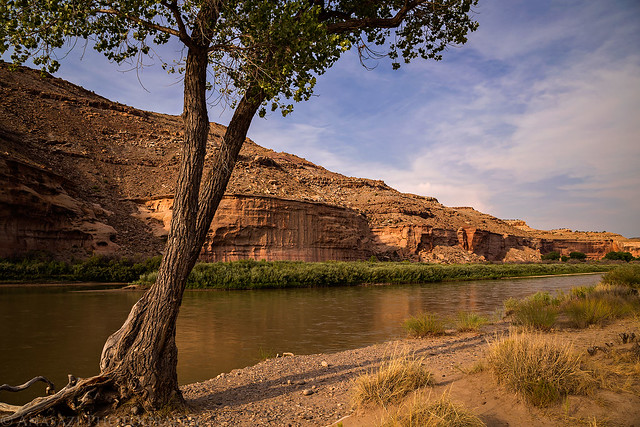 My tent shortly before sunset. 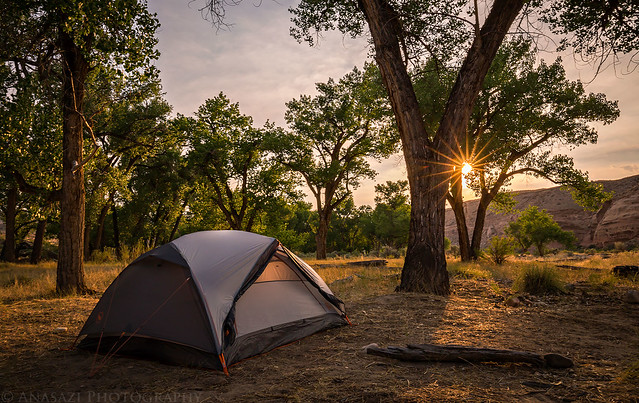 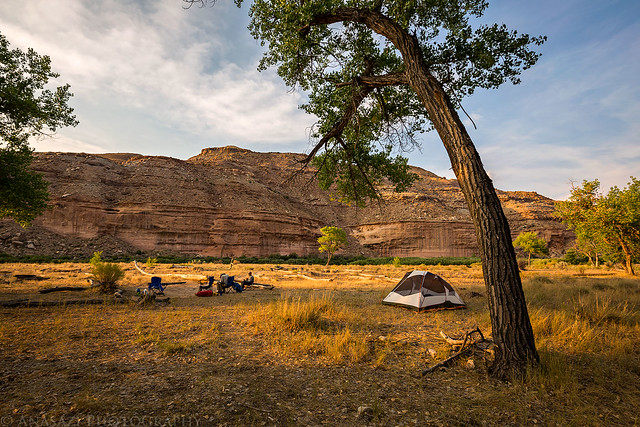 An evening view of Horsethief Canyon when I went hiking before dark. Steve’s Loop follows the rim on the other side of the canyon. 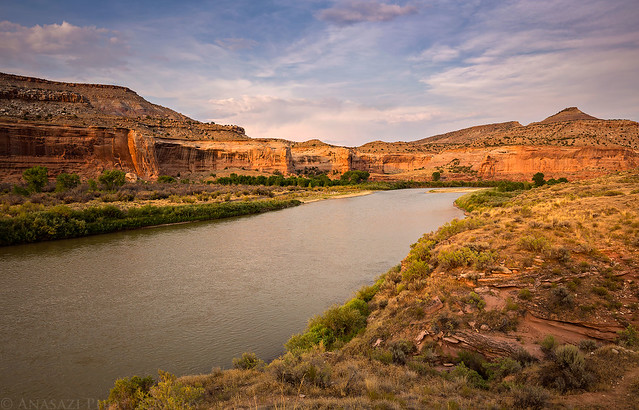 As I was exploring the area I had to walk through a lot of this grass. I got a lot of pointy seeds stuck in my socks… 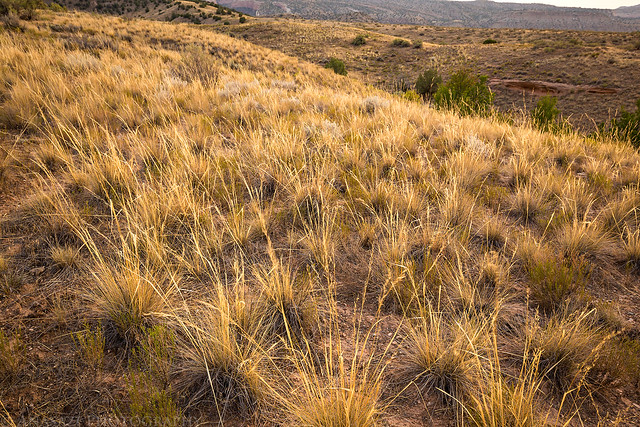 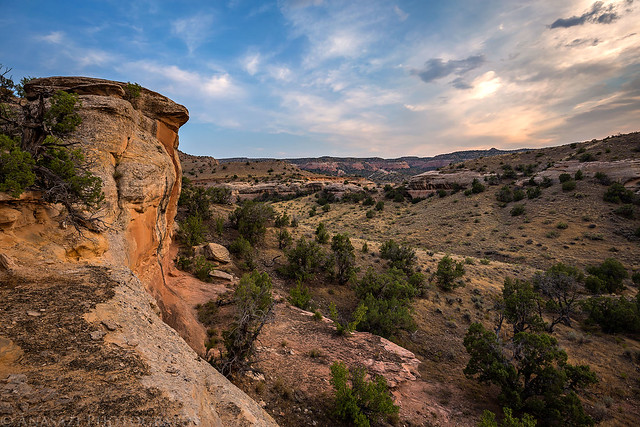 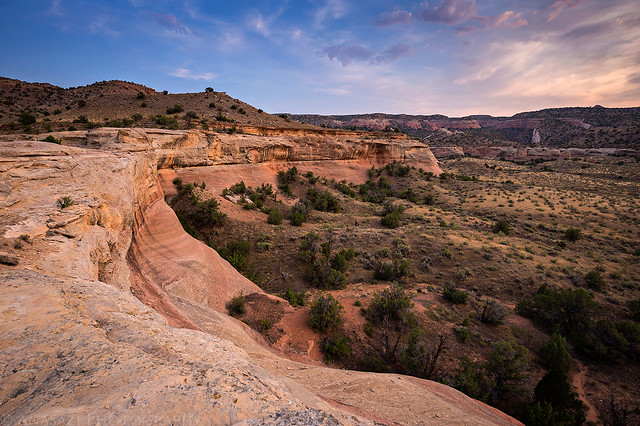 Sunset over the distant Rabbit’s Ear Mesa with a few crepuscular rays. 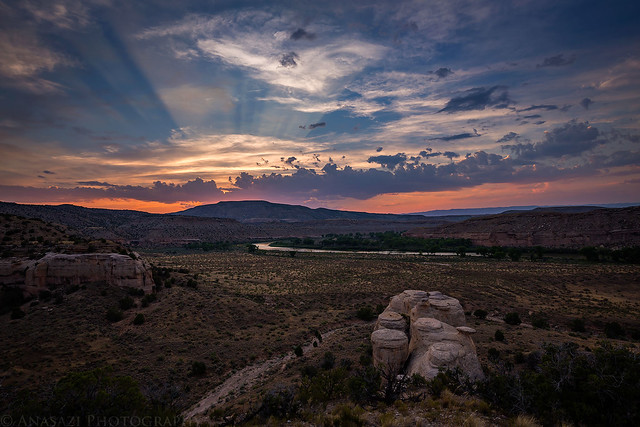 A quick sunset photo I took at the edge of the river. I was completely swarmed by mosquitos while taking this shot! 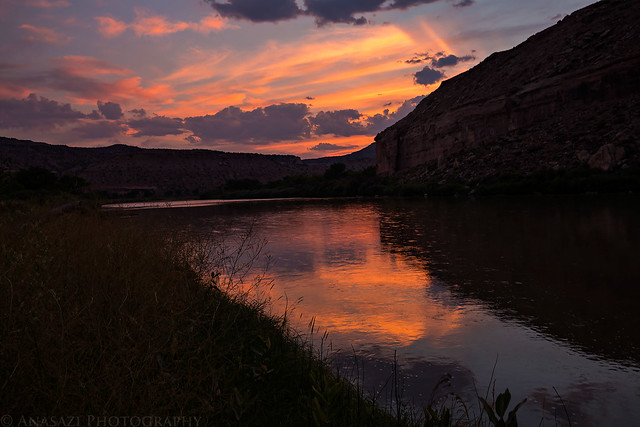 Back on the river Saturday morning. 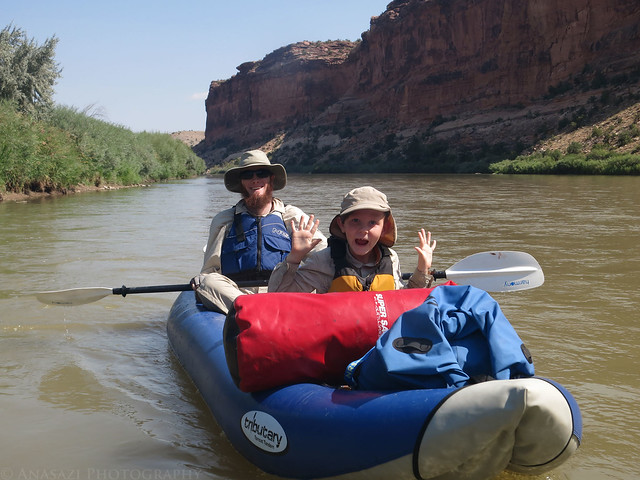 A Blue Heron we floated by a few times. 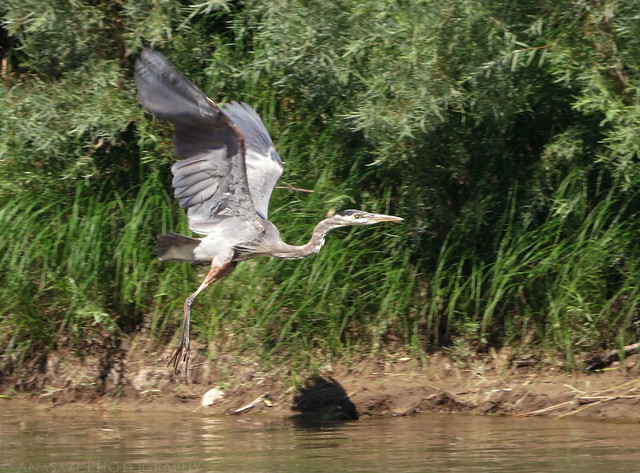 On our second night we returned to Black Rocks 4, which is a favorite campsite of ours and it didn’t disappoint. We love the sandy beach and had a lot of fun cooling off by floating through the Black Rocks section a few times before the sun dipped below the cliff on the other side of the canyon. There were no mosquitos here, so I was able to stay up later and watch the stars come out after the sun went down. It was a great evening!

Black Rocks 4 is one of my favorite campsites. 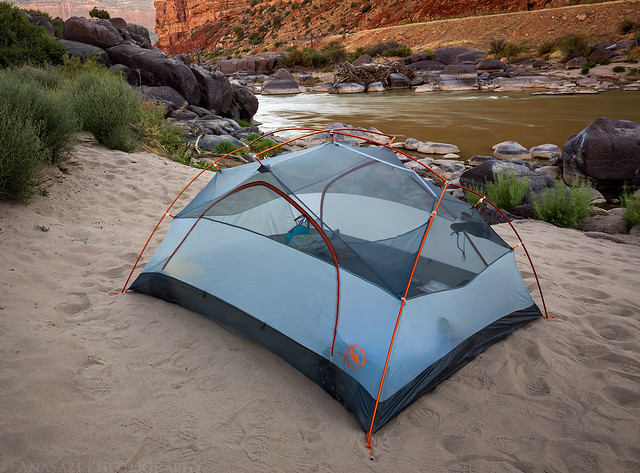 All three of our tents and an overview of the site. 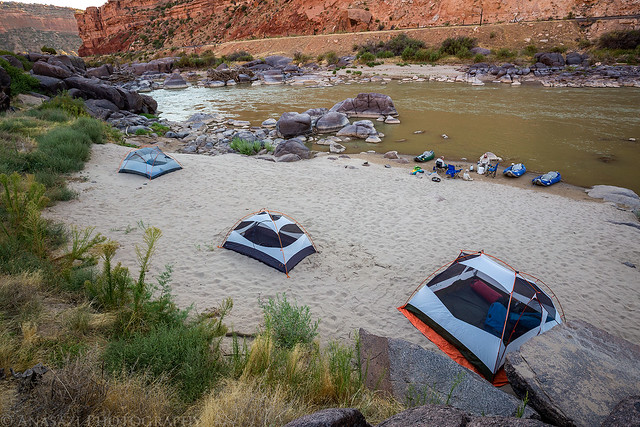 Sunset over Moore Bottom behind our camp. 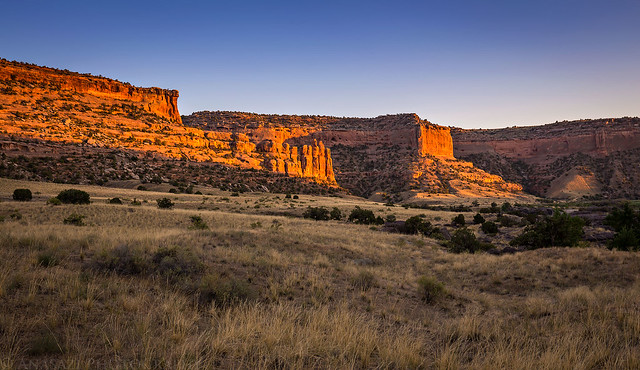 Black rocks near camp and the sandstone cliff in the distance. 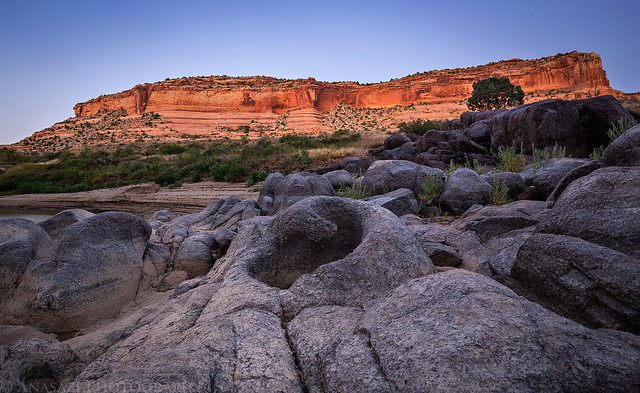 Black rocks and the Colorado River at dusk from camp. 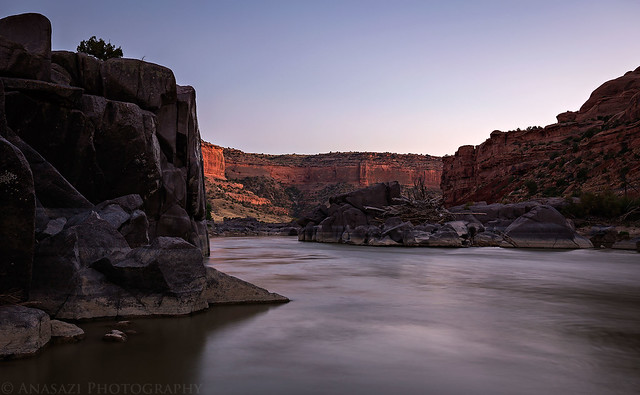 Not a bad view to wake up to on Sunday morning… 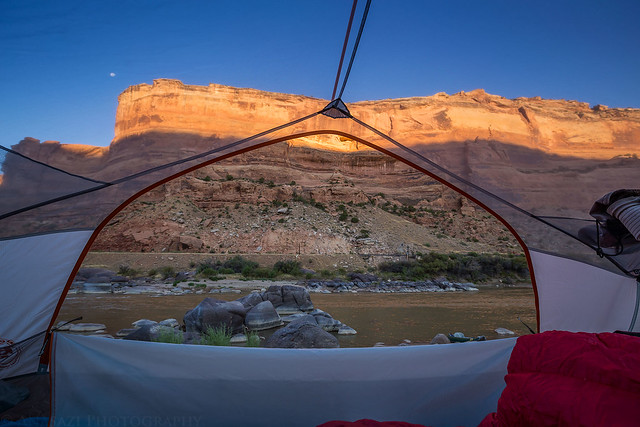 Back on the river Sunday morning for the last eight miles of the trip. 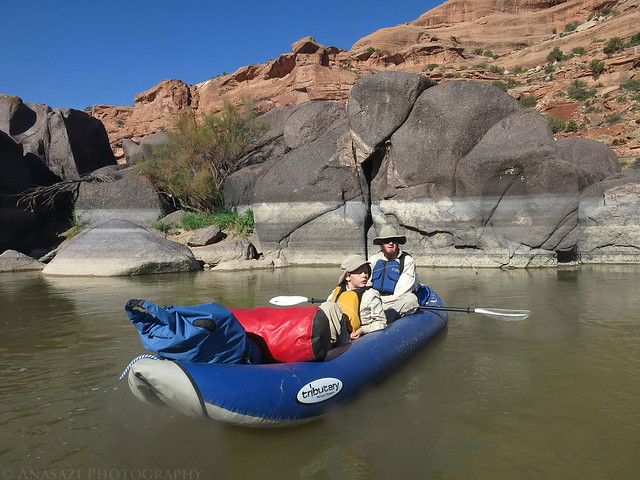 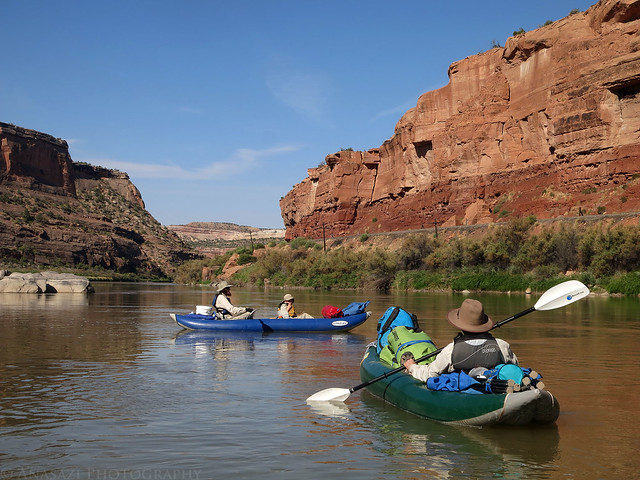 Nearing the mouth of McDonald Creek before leaving Colorado and entering Utah. 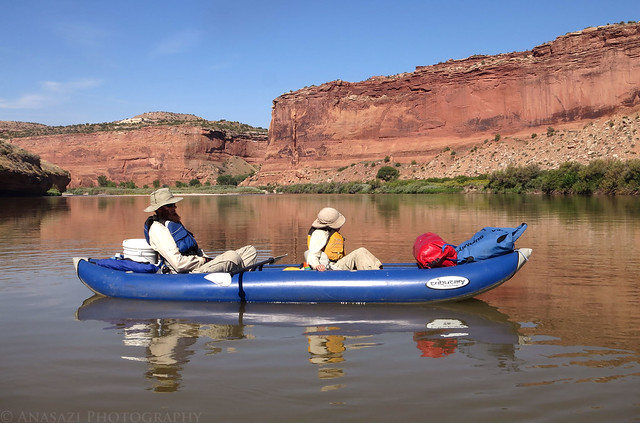