A beautiful sunrise from the Grand View overlook in the Colorado National Monument.

The drive to the Monument was a little slower than usual since visibility in the Grand Valley was pretty low and I got stuck behind plenty of slow drivers on their way to work. Once I reached the west entrance I quickly drove up the switchbacks of Rim Rock Drive until I was out of the clouds and had a much clearer view of the valley. Mount Garfield and the Grand Mesa are visible in the distance over the low layer of clouds. 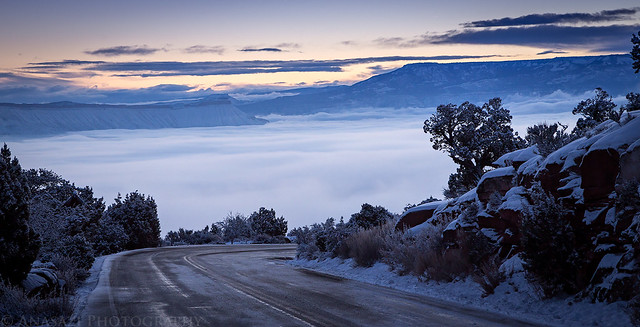 Just a nice view over the clouds to the Book Cliffs this morning. 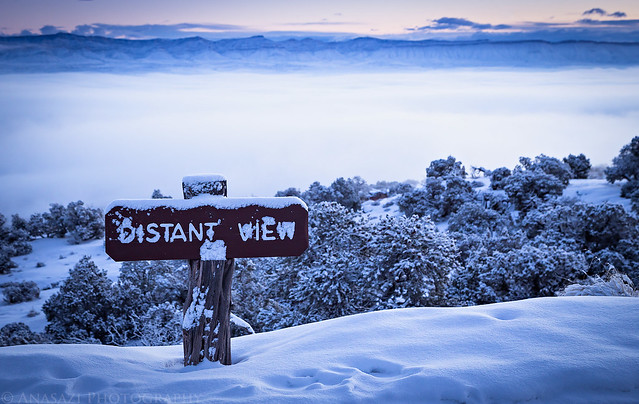 I liked the way that the signs were coated with snow. 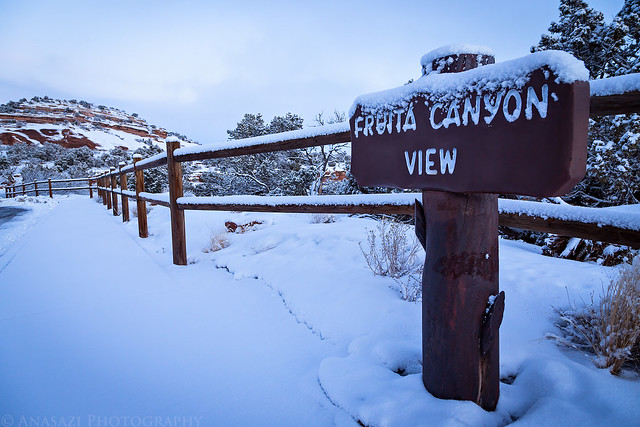 My first real stop was at the Independence Monument Overlook where I planned to watch the sunrise. I took this photo before the sun came up as the fog crept up Wedding Canyon and Monument Canyon.

Eventually the sun began to light up the top of the clouds. 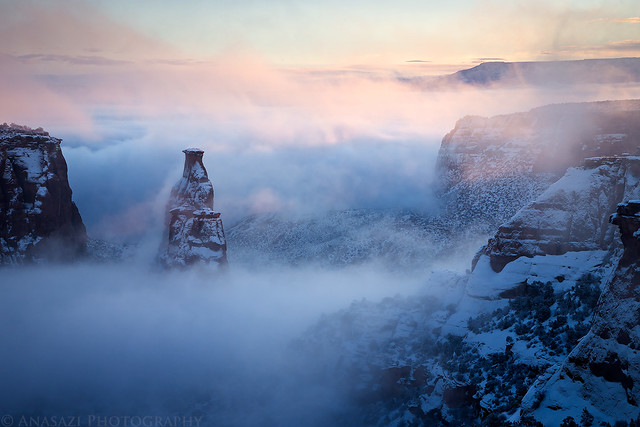 Warm light strikes the canyon rim in front of me. 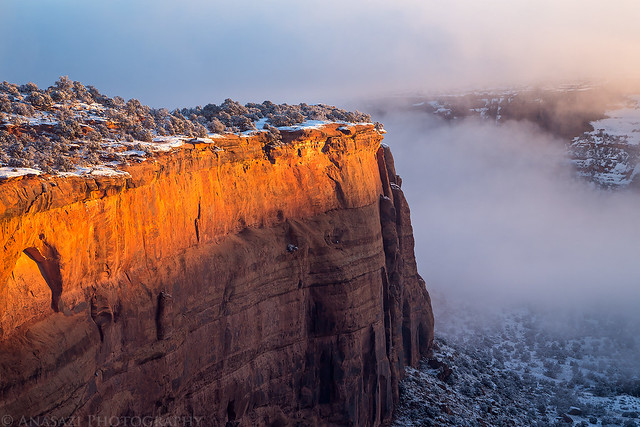 A little more light on the clouds surrounding Independence Monument and the edge of The Island.

After the sun had come up I moved on to Grand View, which is one of my favorite overlooks in the park. I had a lot of fun taking photographs here with the warm light, cool shadows and constantly changing fog.

I love the different layers in this one. The Pipe Organ is lit up on the foreground with Sentinel Spire and Window Rock hiding in the clouds in the background. 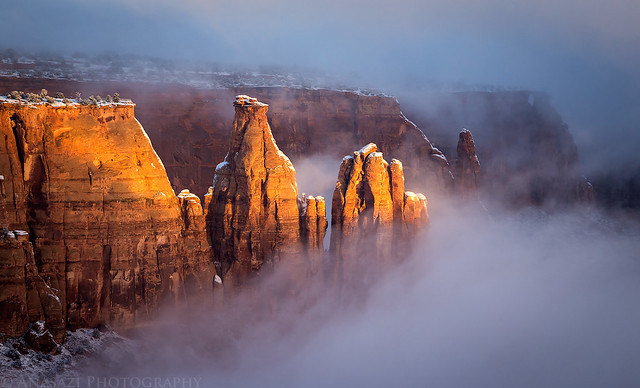 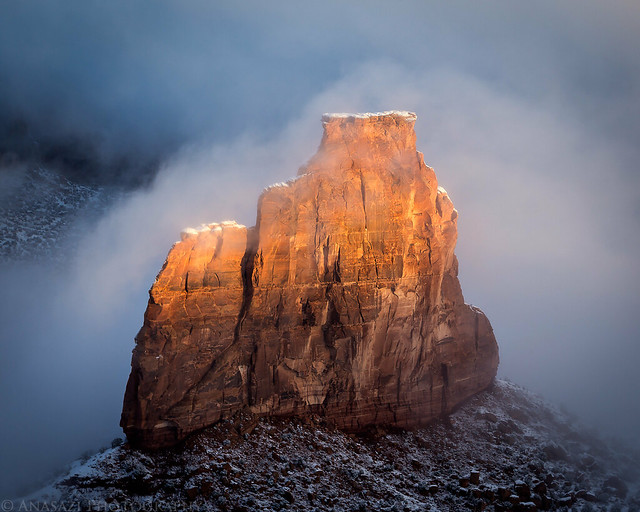 Independence Monument and The Island.

Click on this wide panorama for the real ‘Grand View’ this morning.

Looking over the top of a monolith and Monument Canyon. 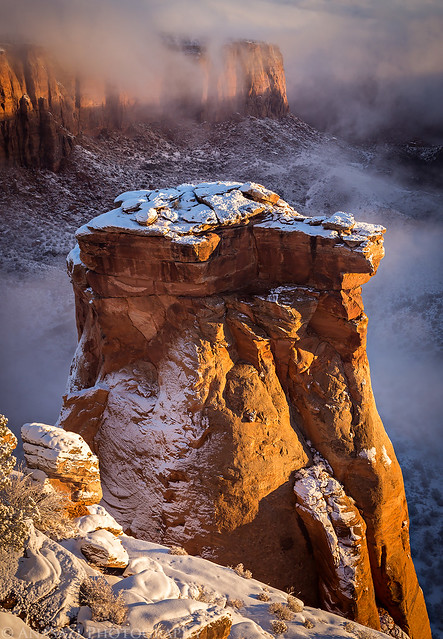 The Pipe Organ and the overlook at the end of Otto’s Trail. 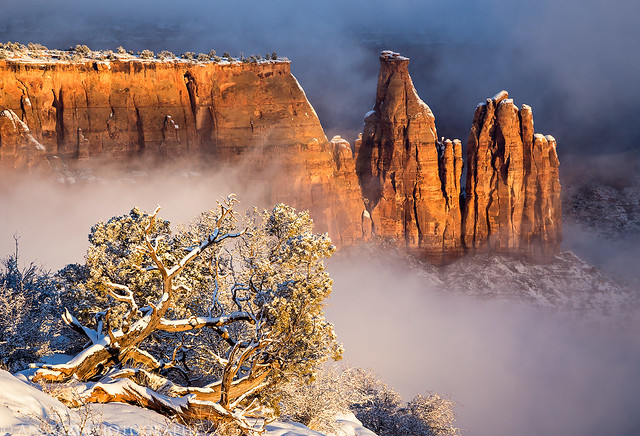 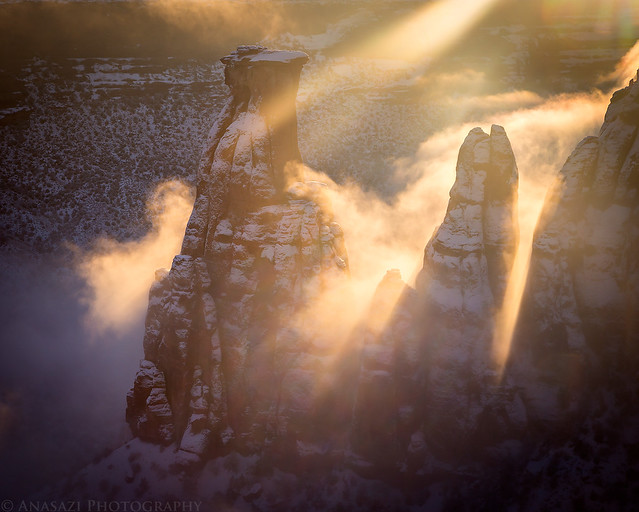 After a little while the fog moved further up the canyon and became thicker, obscuring some of the monoliths below. 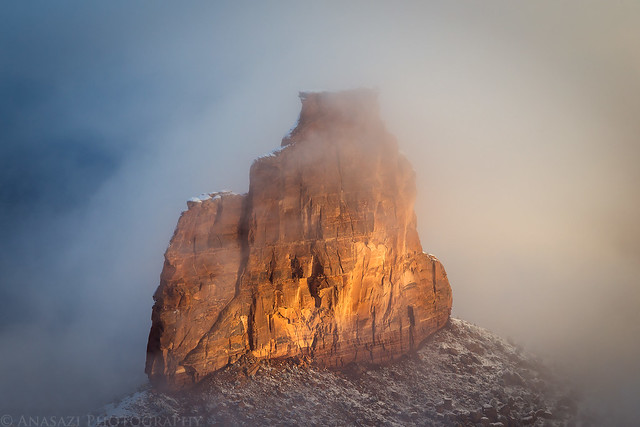 After leaving Grand View and continuing along Rim Rock Drive I stopped for this photo of the overlook and monolith. 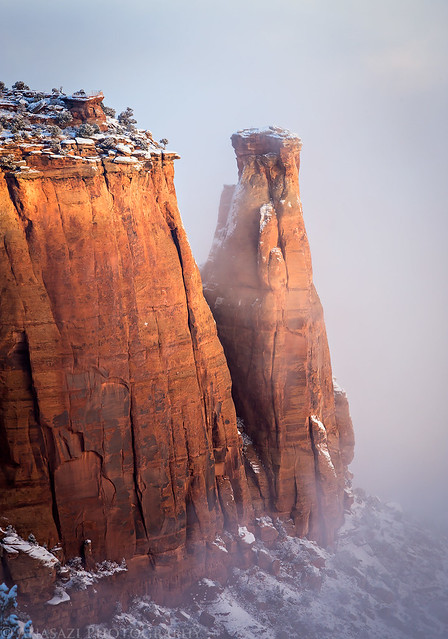 Morning above the Coke Ovens. 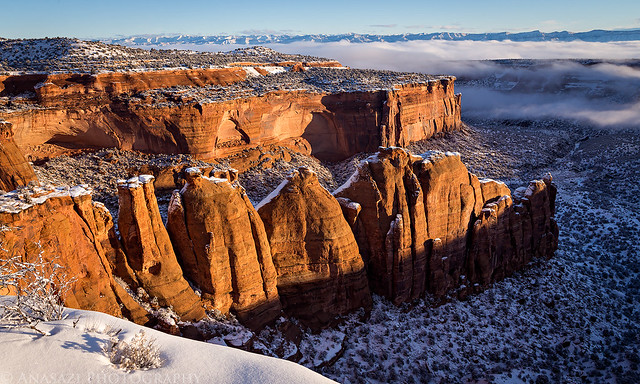 Down in the valley it was overcast, but up here it was bright and sunny. A beautiful way to start the day. 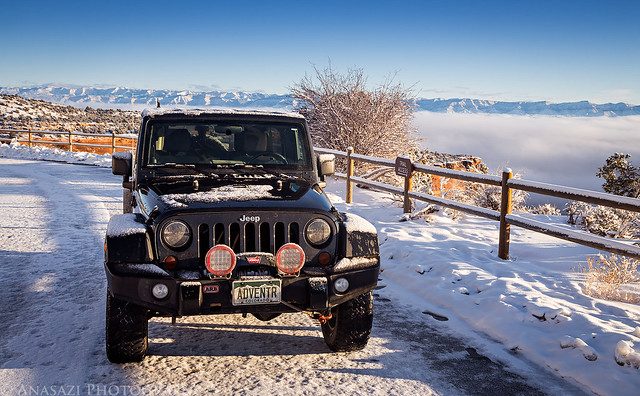 Looking back to Artist’s Point. 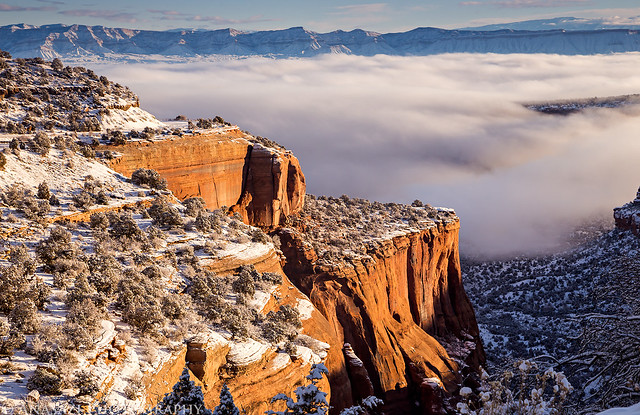 Sixteen miles back to Grand Junction… 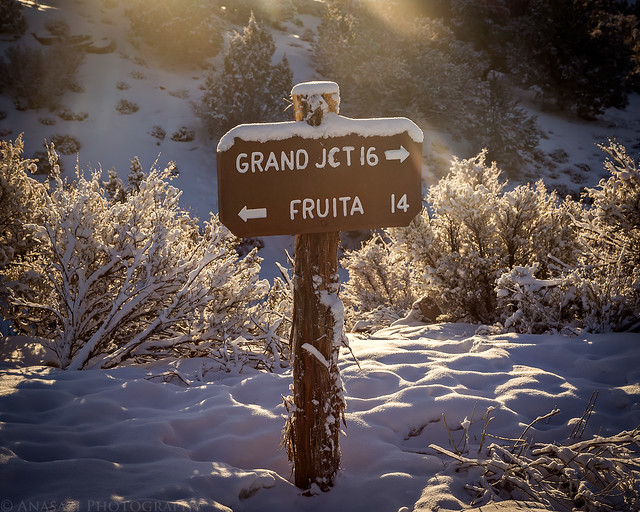 A quick stop at the Ute Canyon Overlook. 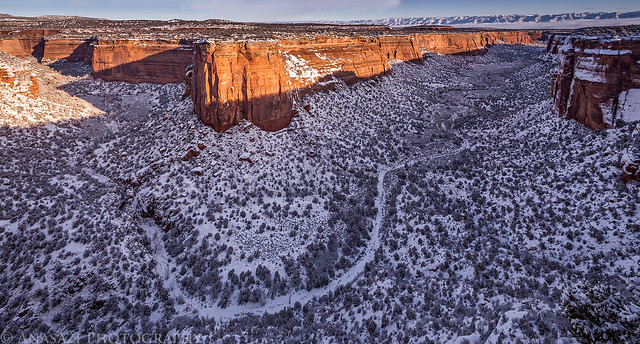 Followed by a brief stop near the head of Red Canyon. 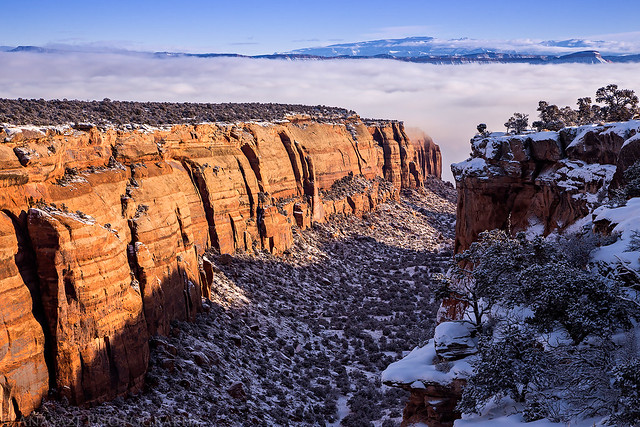 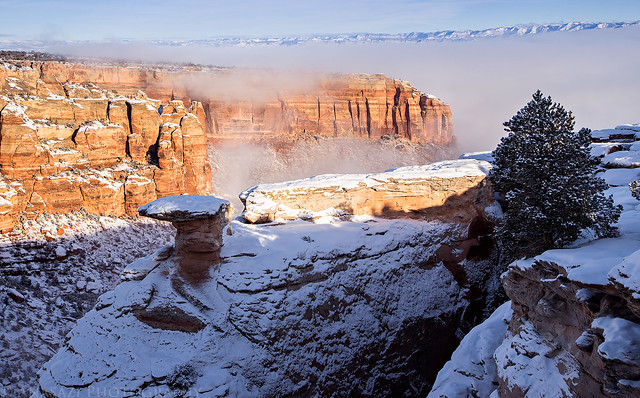 Descending down into No Thoroughfare Canyon I stopped for a photo of this rock, known as the Dog’s Tooth. I don’t think I’ve ever taken a photo of it before? 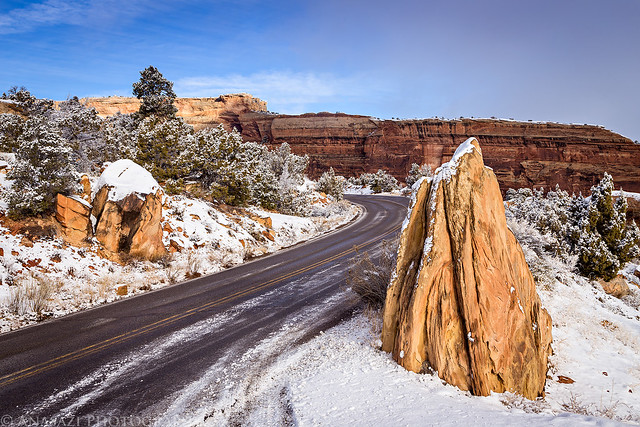 As I descended lower into the canyon I soon found myself under the clouds again with no sunlight. 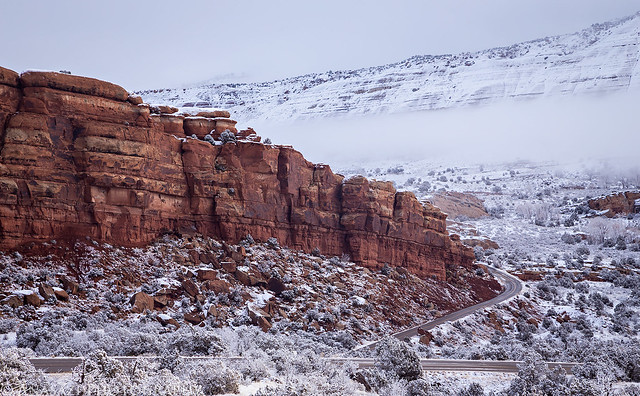