I left after work on Friday afternoon and made may down to The Needles with a quick stop in Moab for gas. There was still just a little bit of light at dusk left when I arrived at the Visitor Center, so I can finally tell that the daylight hours are getting longer! I had planned to follow the Colorado River Overlook Road to the starting point for my hike in the morning, but found that the gate was closed and locked, which was not updated on the Road Conditions page on their website. This was a little disappointing, but I could work around it and would just have to go in the back-way instead. I returned to the Lockhart Basin Road and found a campsite for the night, then went to bed early after listing to a couple podcasts. There were a few sprinkles of rain on and off overnight and some strong gusts of wind, but when I woke up over an hour before sunrise on Saturday morning I could see the moon and plenty of stars in the sky and figured it would be a good morning for a hike. I followed the backroads into the park and started hiking down into The Loop just before sunrise.

I watched the warm light of sunrise spill across the landscape of Canyonlands to Junction Butte just before I started my descent into The Loop. 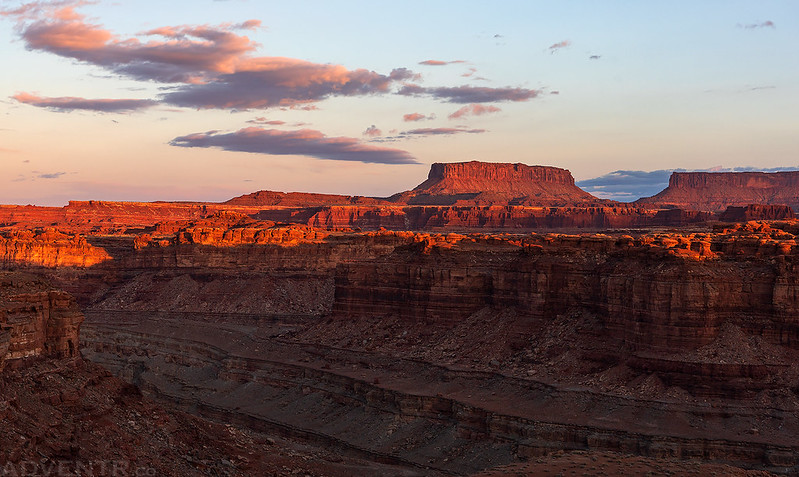 The first part of the hike followed an old mining track that brought me most of the way down into Loop Canyon before disappearing. From there it was all cross-country hiking until I reached the edge of the river and followed a faint trail down to the river. 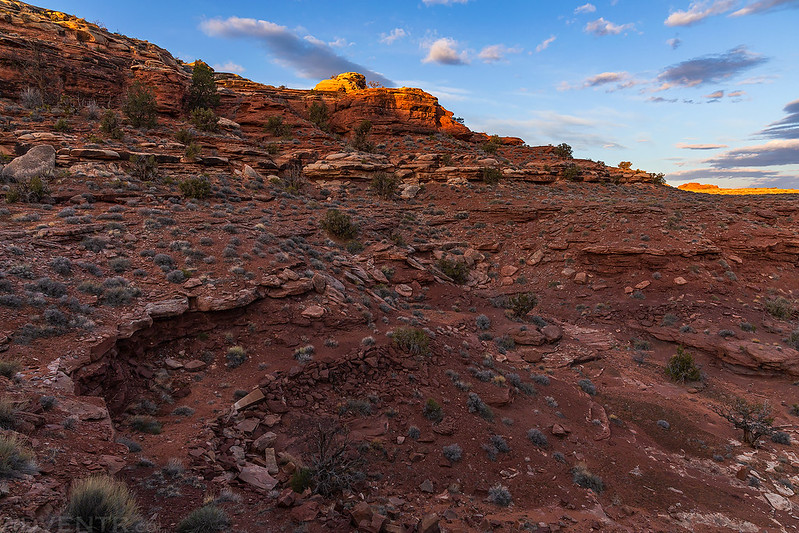 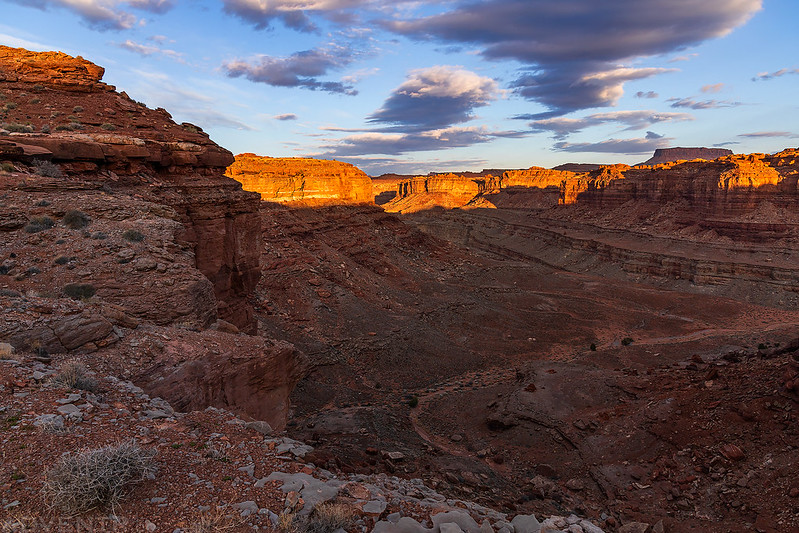 For those not familiar, this is a topographic map of The Loop which is a double oxbow of the Colorado River, also known as an ‘entrenched meander’ by geologists.

I hiked out of Loop Canyon to the edge of the limestone above the Colorado River and then followed the edge downstream to a small campsite on the river known as The Cove. 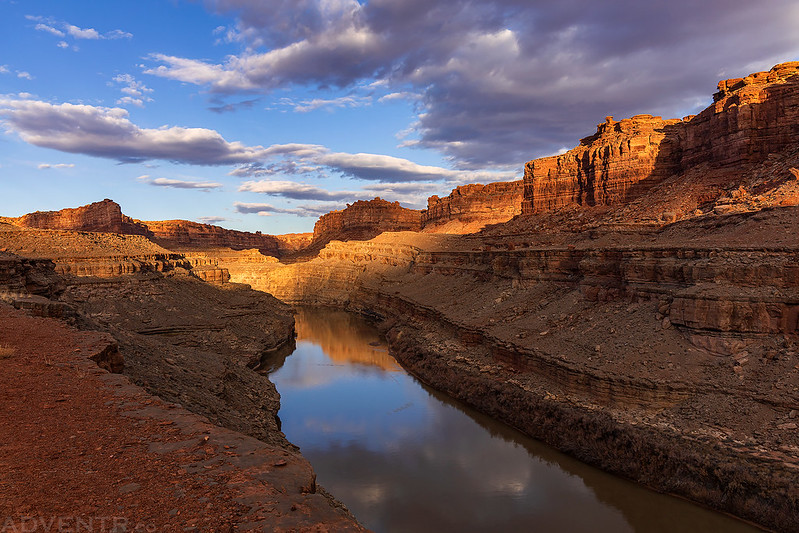 Although the storms mostly missed this area, there were plenty of nice clouds in the sky which made for some interesting spotlighting in the canyon. 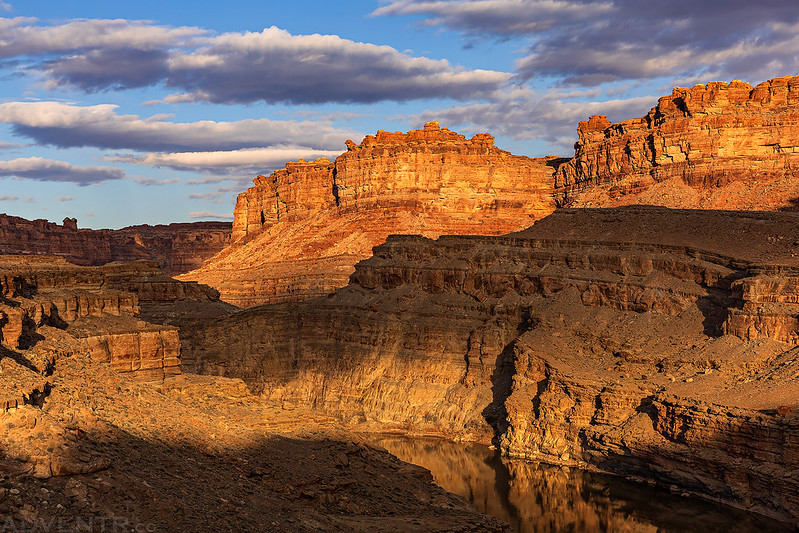 It was a bit warm and humid out when I reached the edge of the river. I’m really looking forward to a couple river trips this summer! 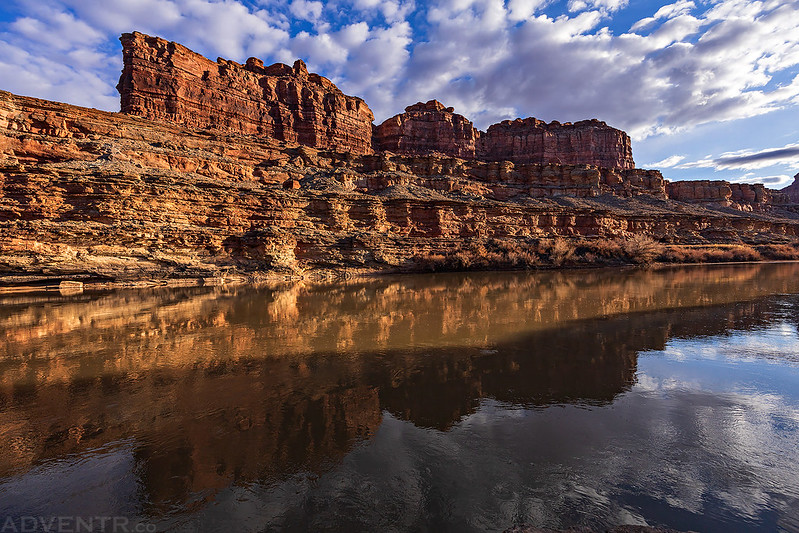 The Colorado River at The Cove. Next I would be following that overhanging ledge in the lower left over to Anasazi Bottom. 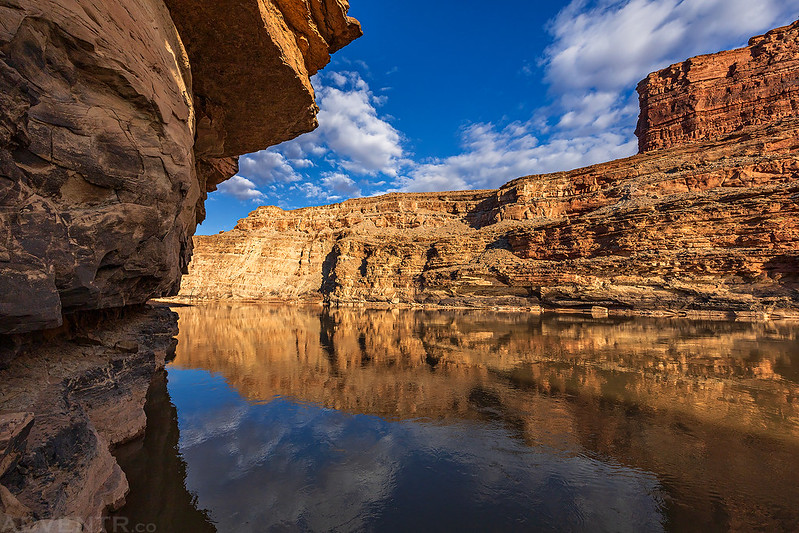 I had to crawl along this ledge for about 200 feet which was not very fun for someone as tall as I am. It got a bit narrow in a couple of places, too. 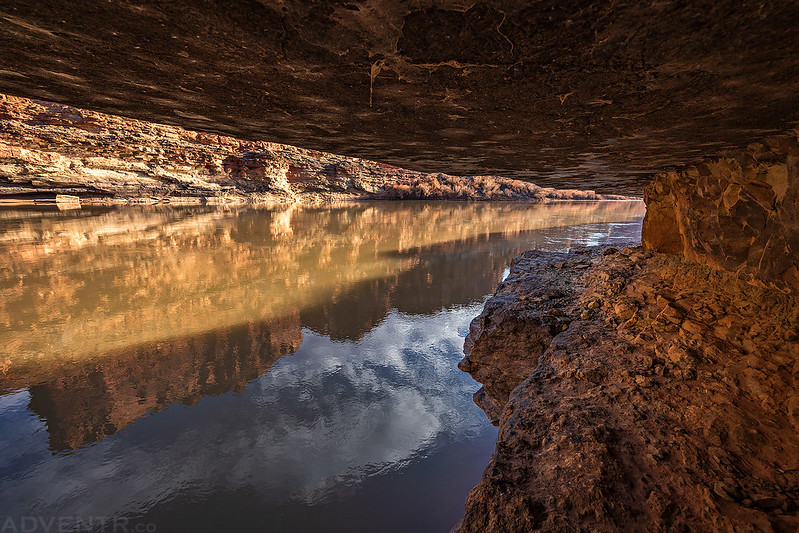 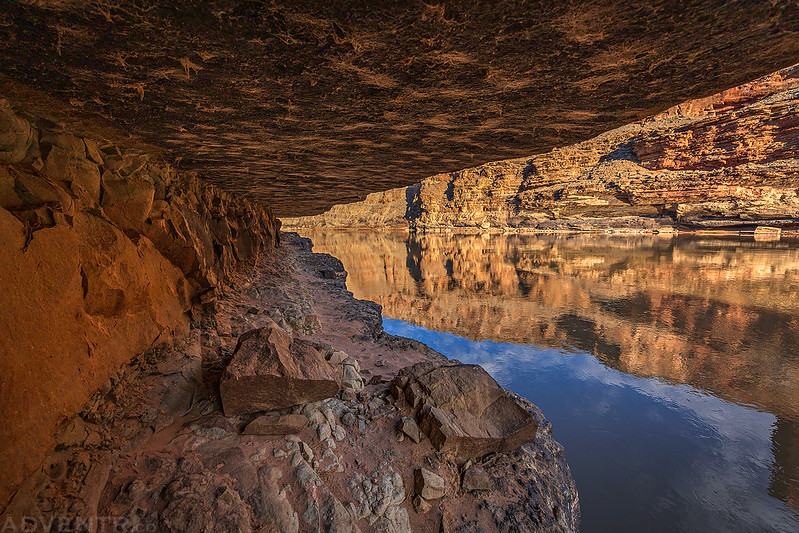 While exploring the area I found a couple of small granaries and ruins, but only a couple of them were still in decent shape like this little granary that I almost missed. 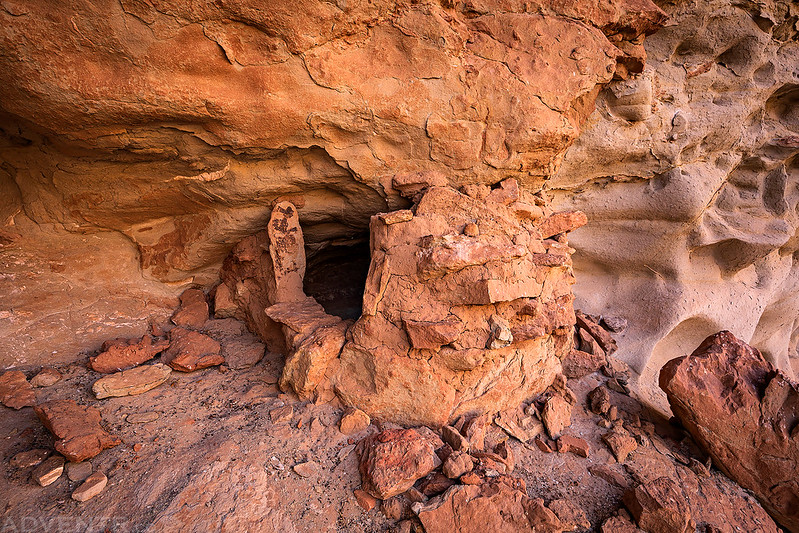 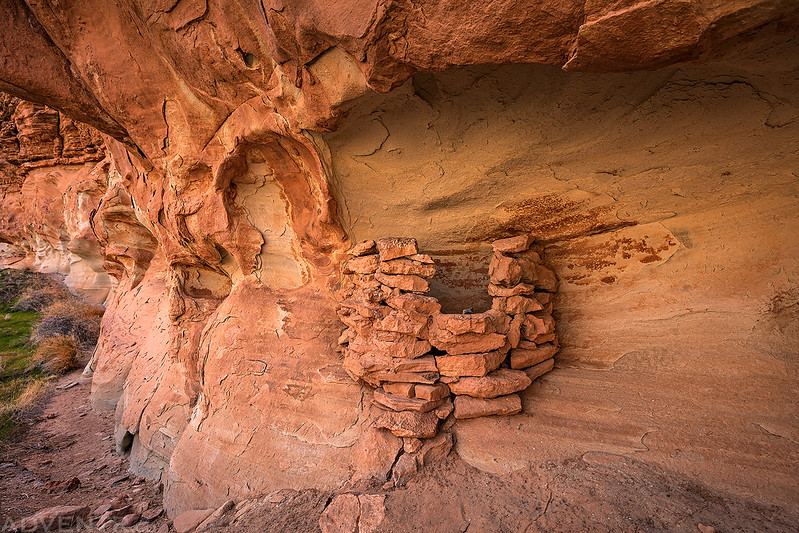 This was my favorite little granary that was built into a small hole in the wall. 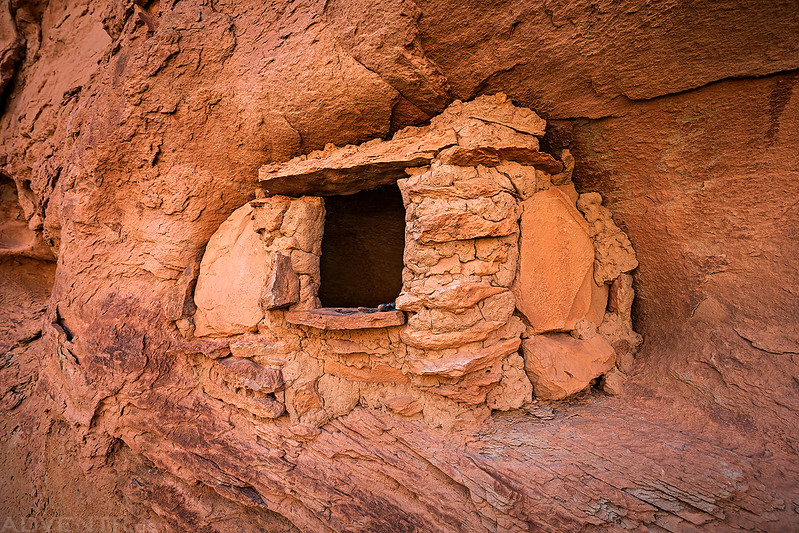 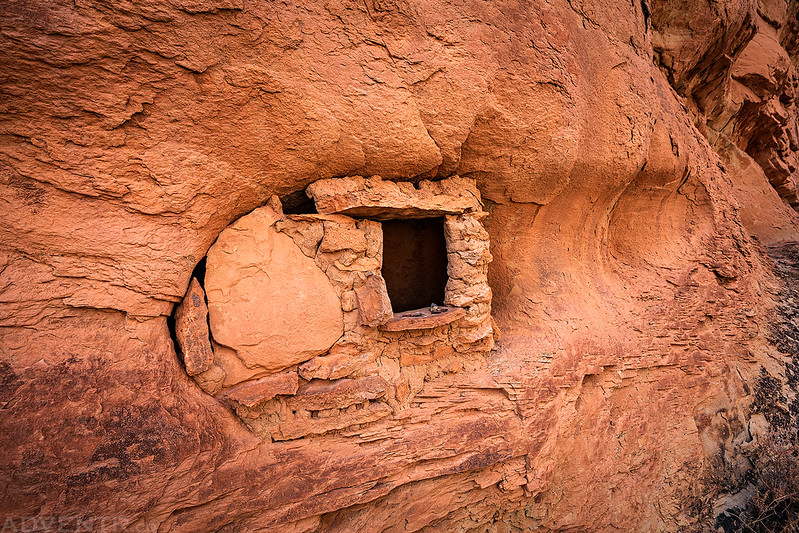 A view across the canyon as I started climbing back up from the river. 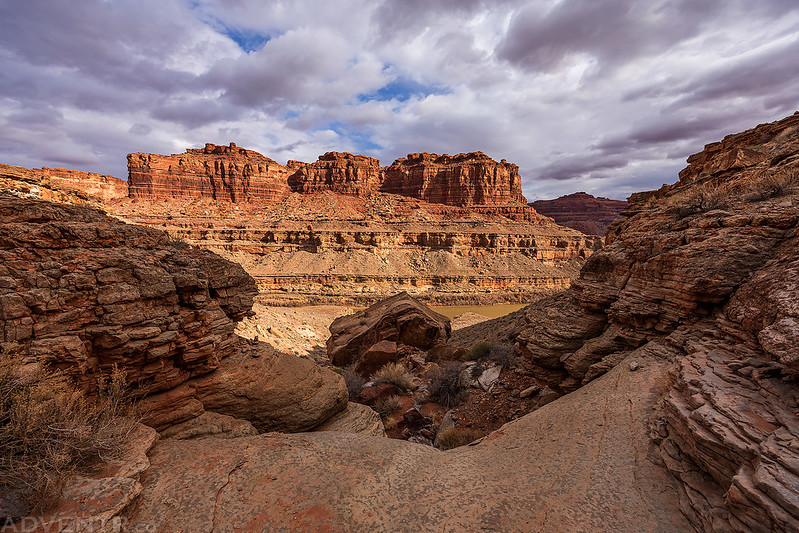 The light and clouds were looking even better during my hike back. 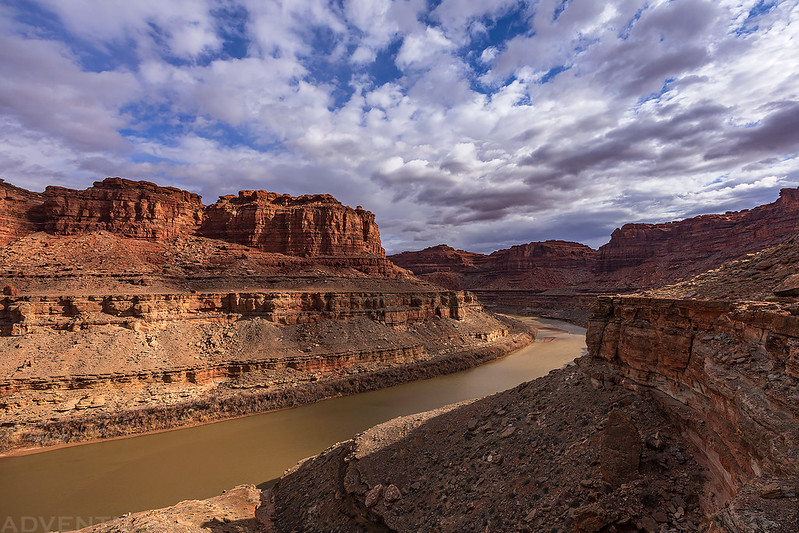 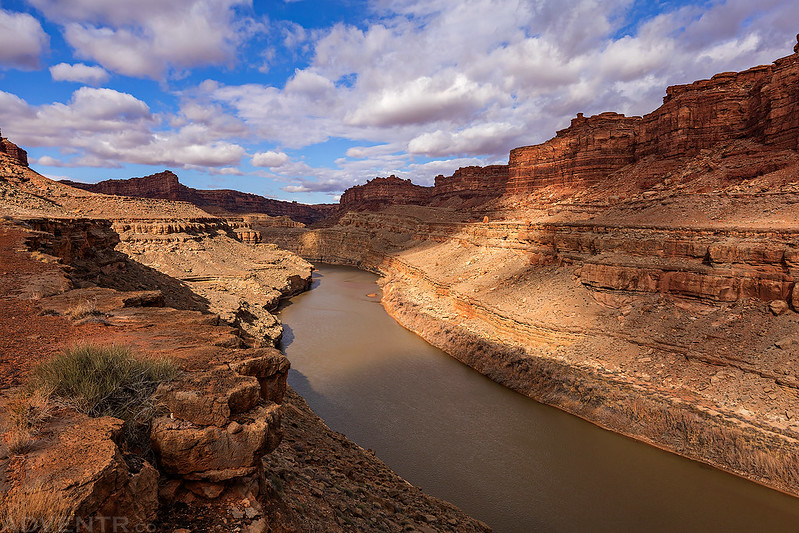 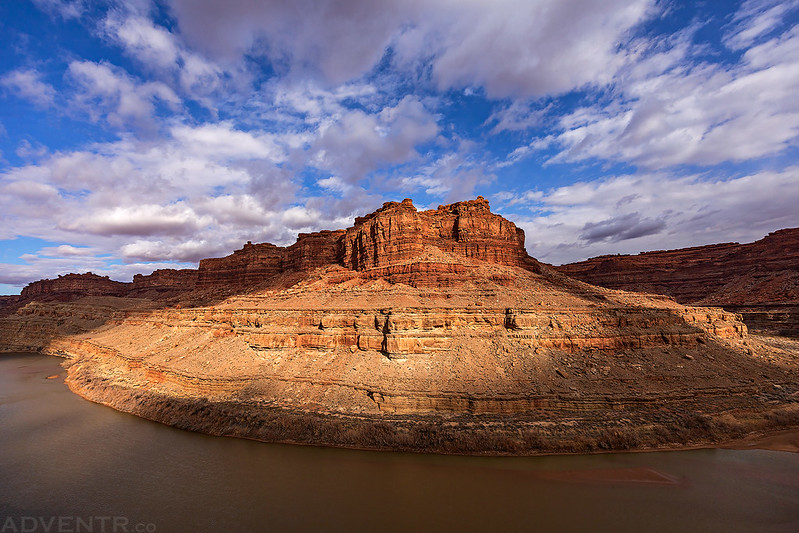 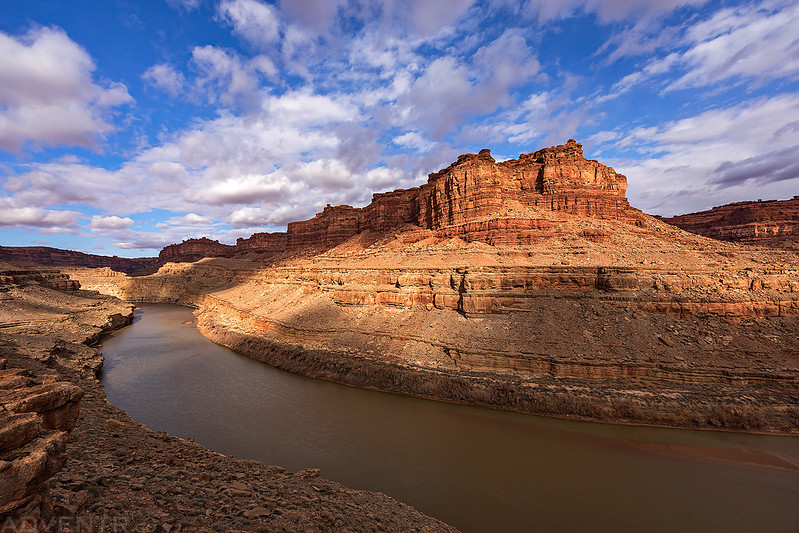 The round-trip hike didn’t take nearly as long as I thought it would and I still had plenty of time left for more hiking today, so I took a short drive over to the Lower Jump of Salt Creek to look for an arch.

Lower Jump Arch is pretty cool and I like the big vertical crack through most of the arch. 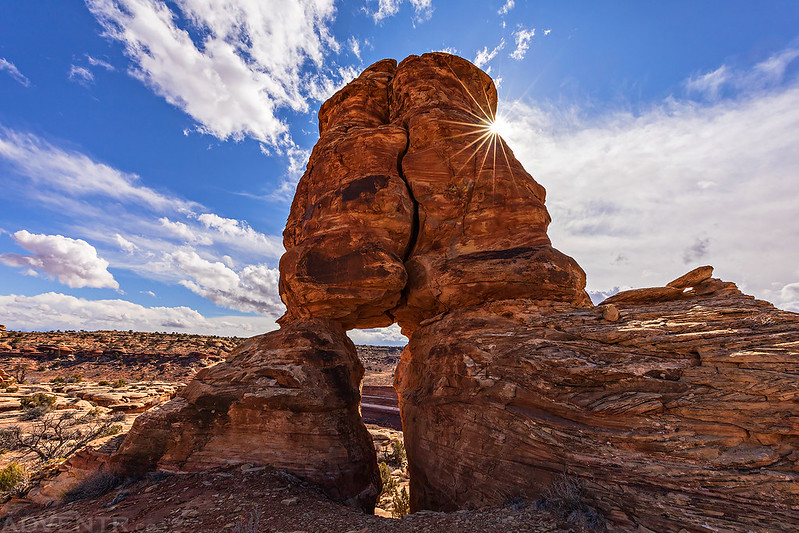 After the short hike to Lower Jump Arch I returned to main part of The Needles and went on one more hike to search for some ruins I was not successful in finding during my January visit, but I still came up empty handed this time. Then I returned to my campsite, had dinner and relaxed for the rest of the evening. About two hours before sunset the winter storm finally caught up to me and it rained and snowed for a while. The storm started to clear just before sunset, so I made sure to take a couple of photos. 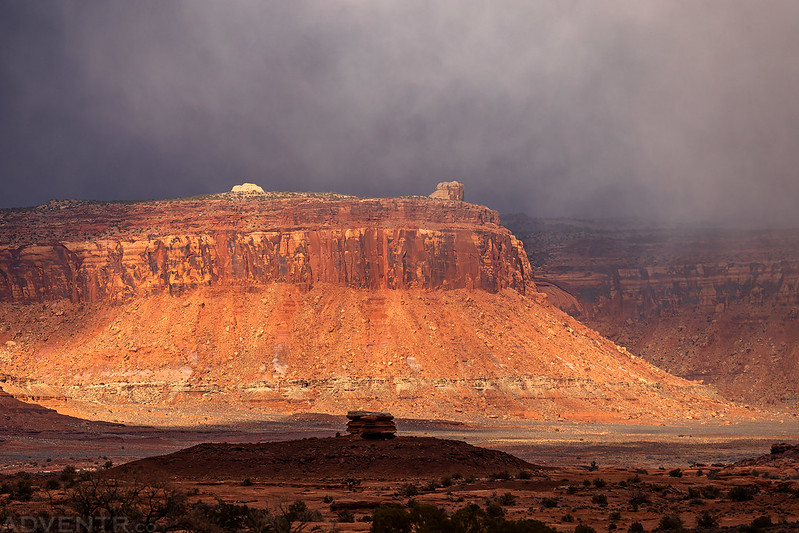 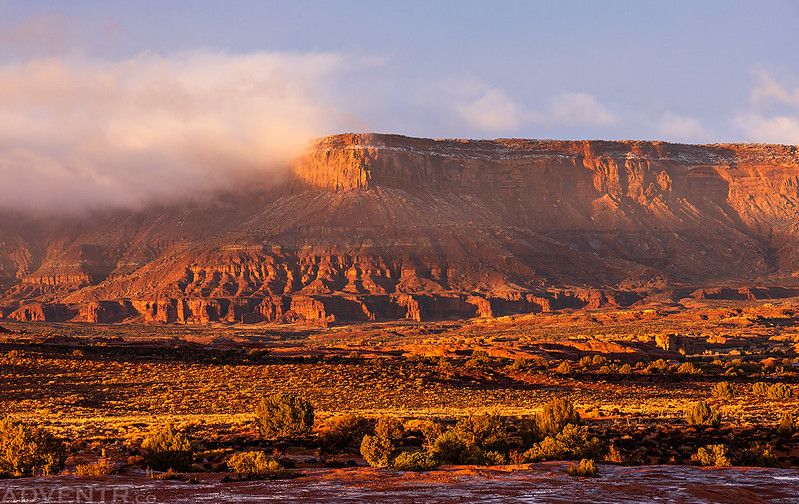 I was pretty tired and went to bed early again. Like the previous night there was some more on and off rain and stronger gusts of wind, but it had all cleared out before sunrise. I was up again early on Sunday and thought it might be a fun to get a view of The Loop from above this morning, so I returned to the edge of The Needles and followed part of the Hayduke Trail to an overlook of The Loop. It was noticeably colder out this morning and the sky was mostly cloudy, but I had hopes that the sun would come out for a bit.

We-Hope-So Wash was a bit wet and muddy this morning after the rain from the previous evening, but it was still easy hiking and I made great time. 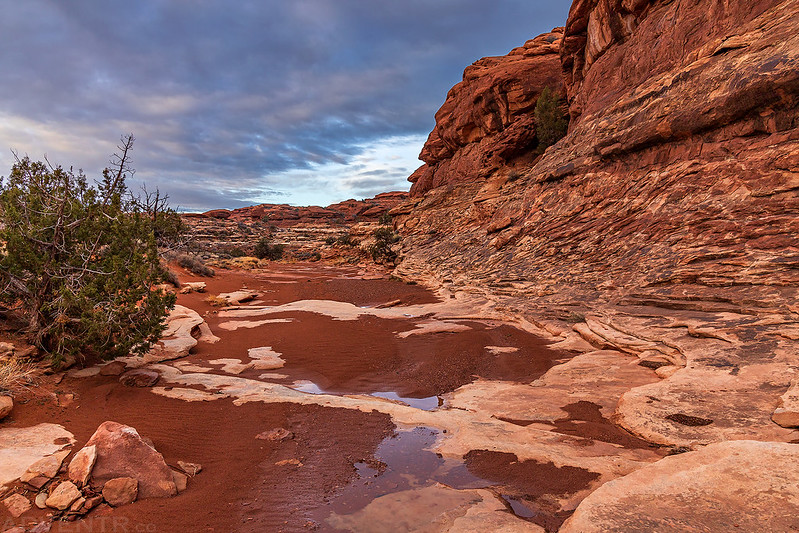 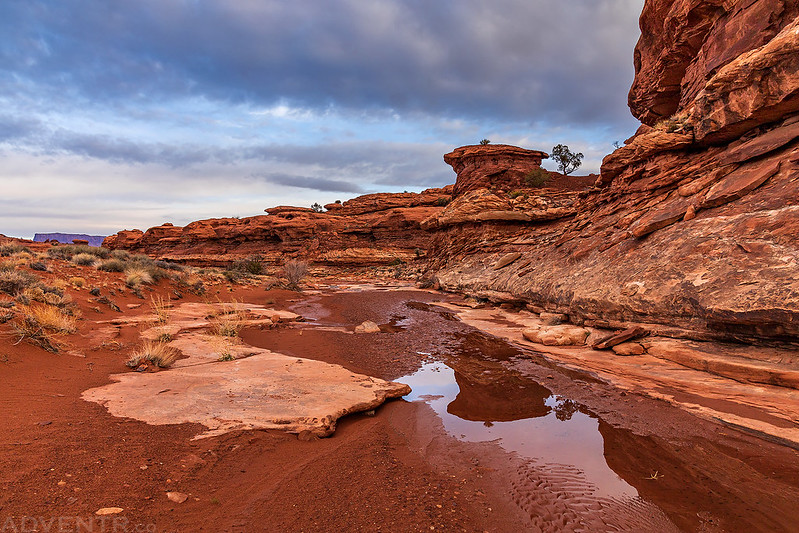 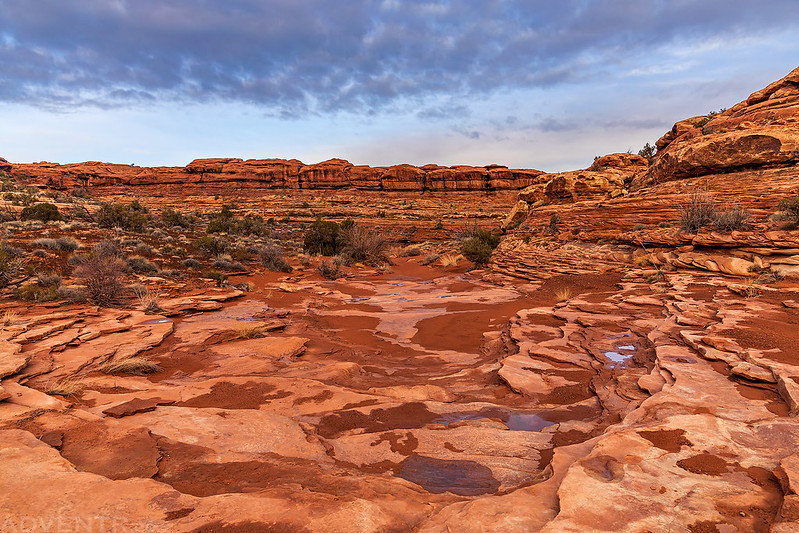 The sun started coming out just as I crested the ridge to an overlook of The Loop. I couldn’t have timed that any better! I had hiked up to that notch in The Loop just to the right of the spotlight when we floated Meander Canyon. Our final campsite of that trip was located just on the other side. 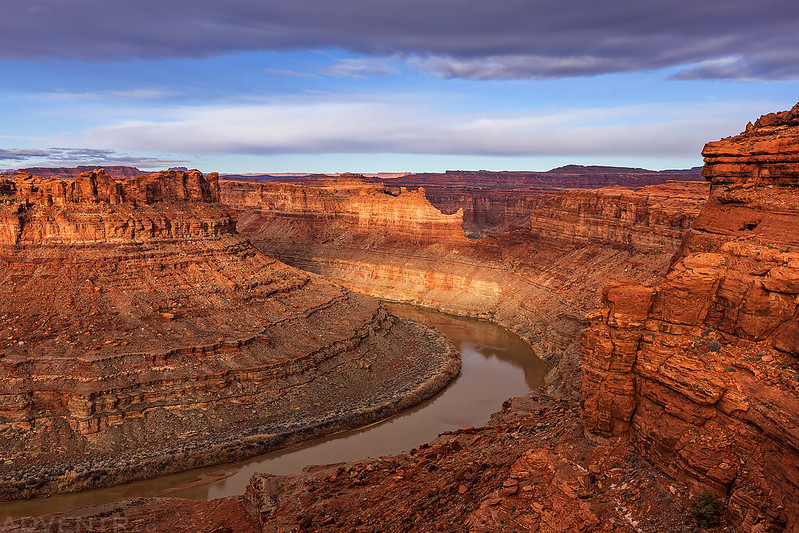 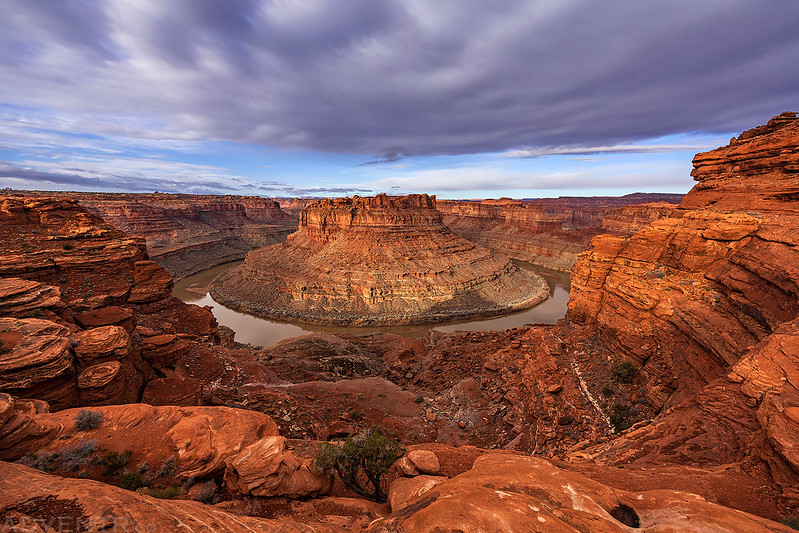 It was a great view from the top! 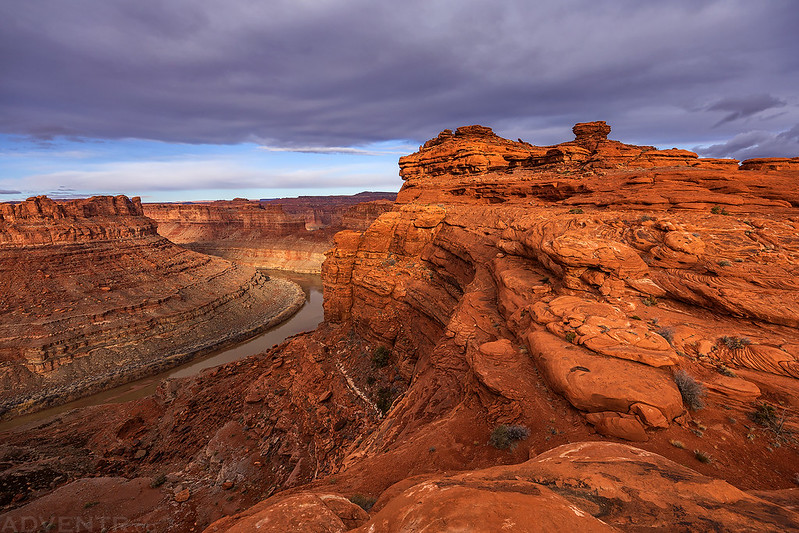 One Oxbow of The Loop 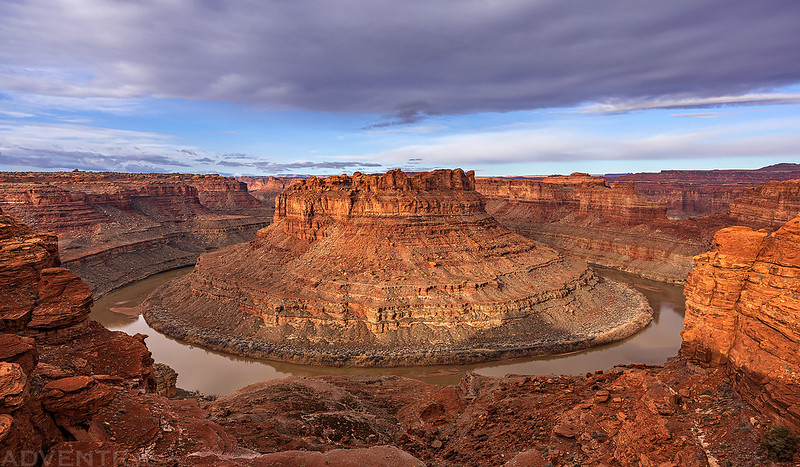 Once the clouds overtook the sky again and the sun disappeared, it was time to climb back down. 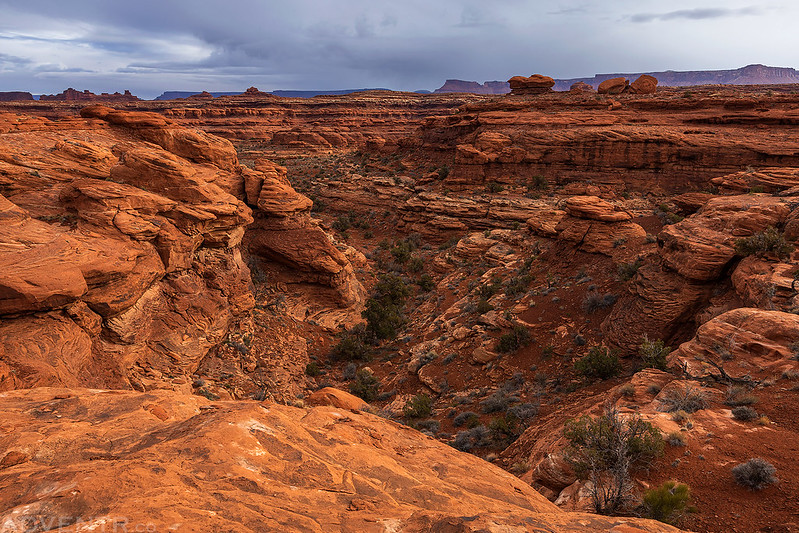 I followed the Hayduke Trail through We-Hope-So Wash back to my Jeep and then started the drive back home. The sky would stay mostly overcast and I wouldn’t see the sunlight again until I was north of Moab. It was another amazing weekend exploring more of the backcounty in Canyonlands National Park.