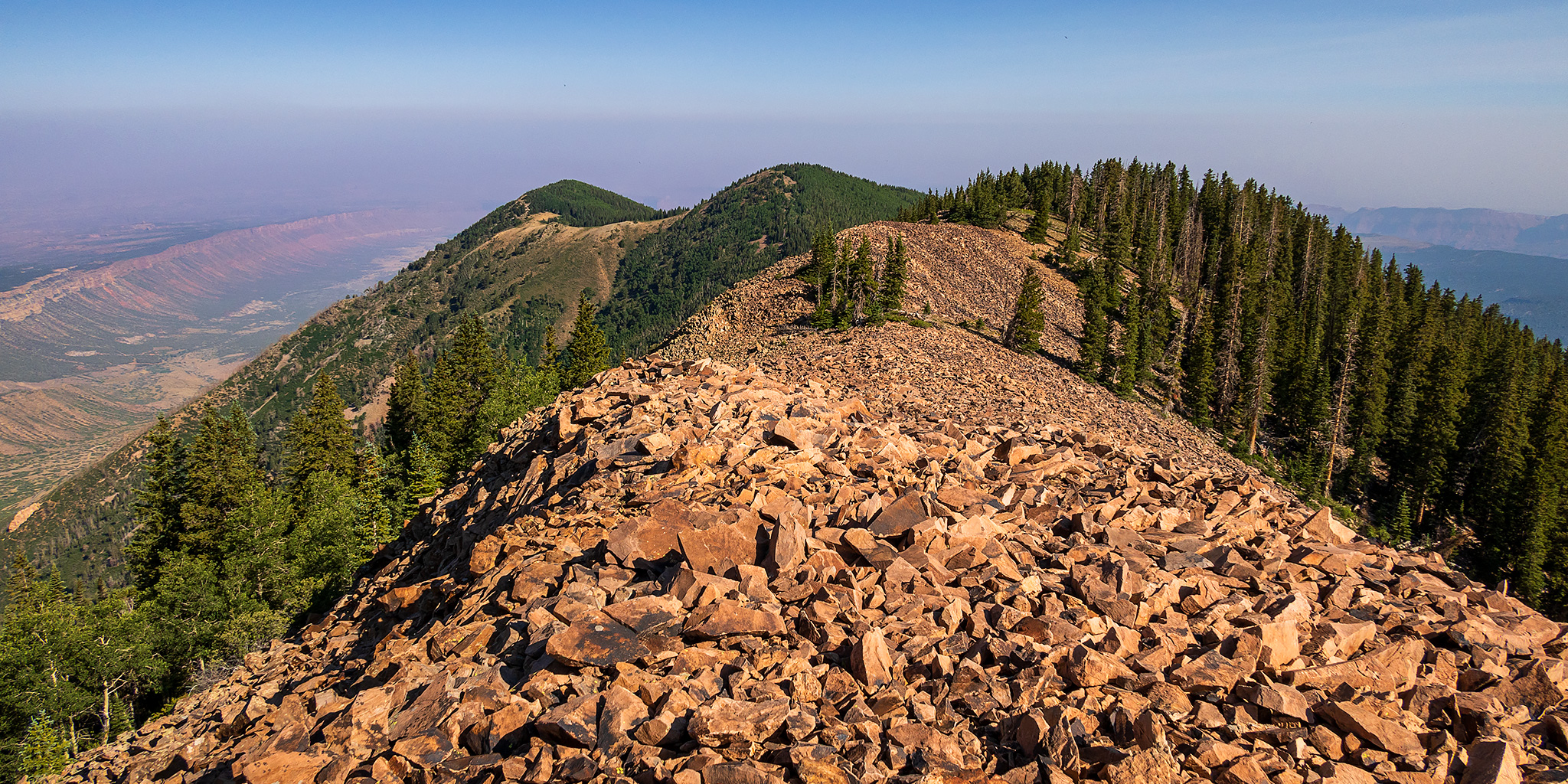 A view of Mineral Mountain from the Miners Basin Trail. 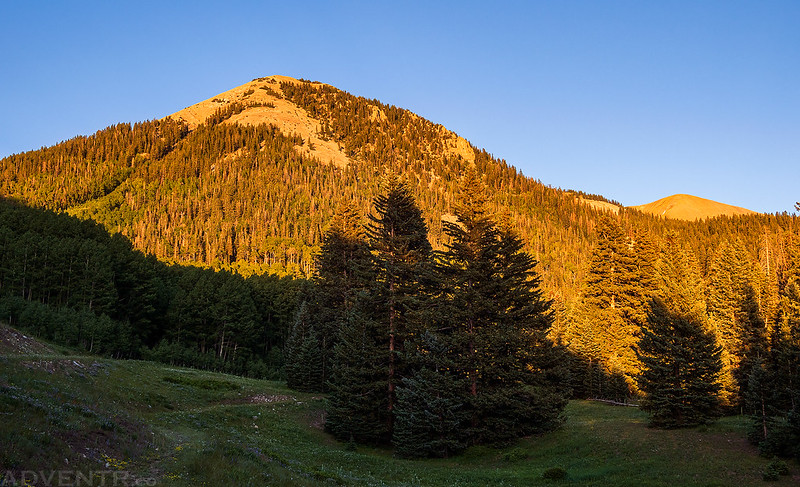 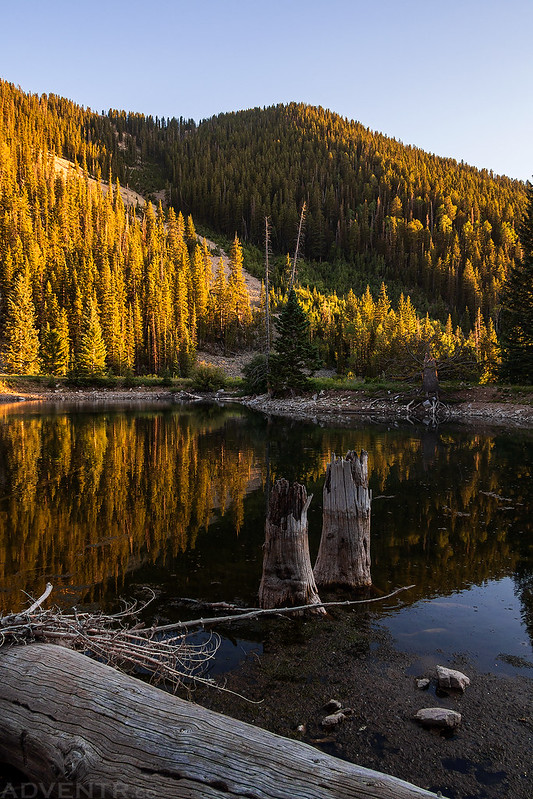 This little lake in Miners Basin was the lowest I have ever seen it at this time of the year, but there were still a lot of fish jumping around just before sunset. 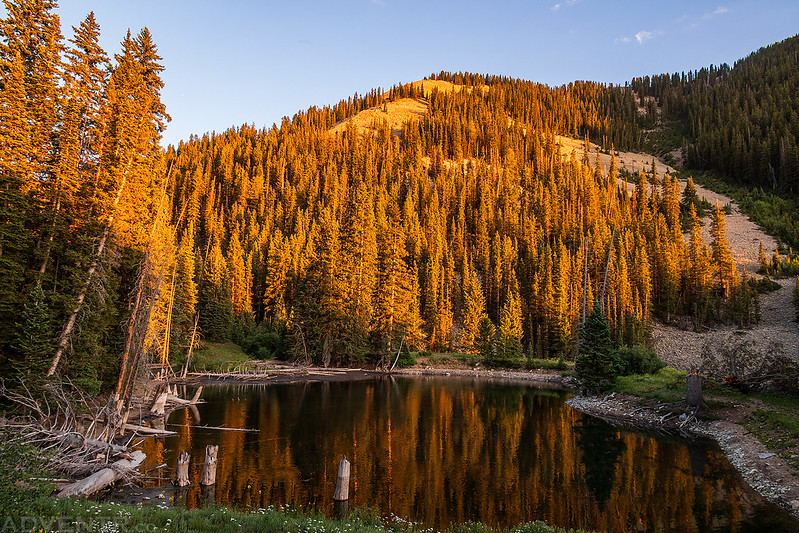 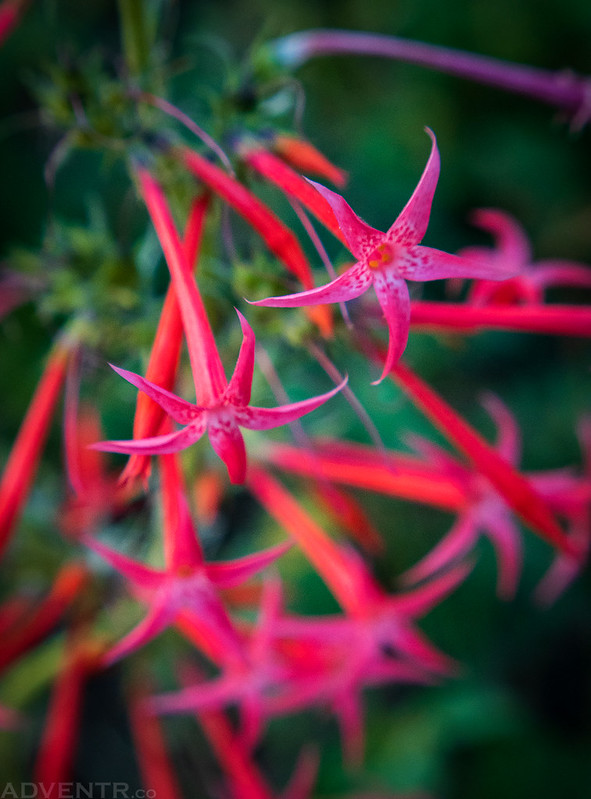 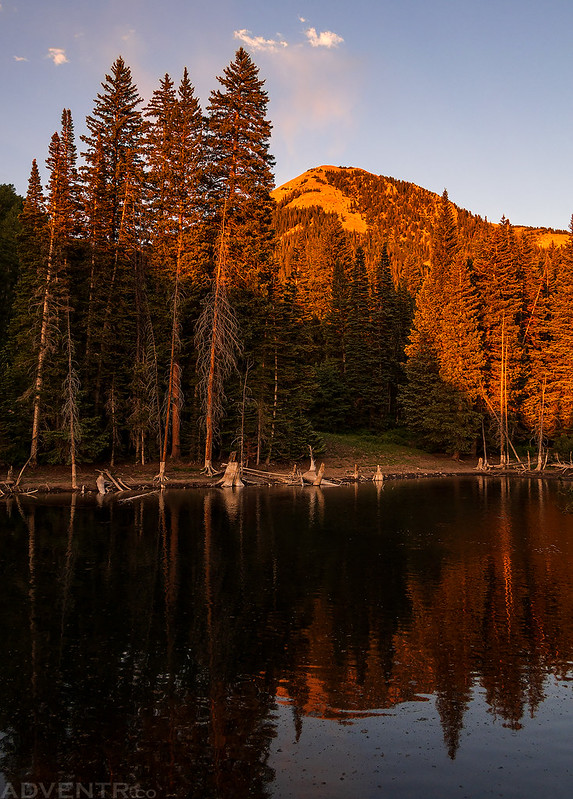 From the other end of the lake I could see the top of Castle Mountain. 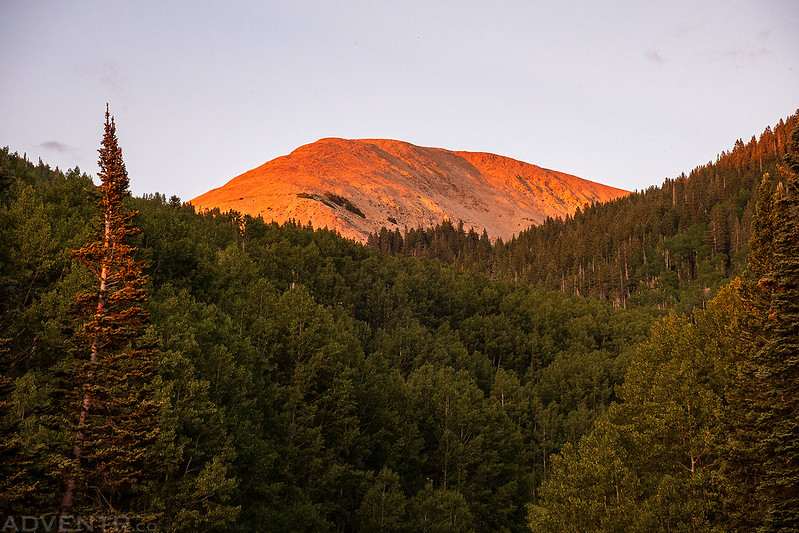 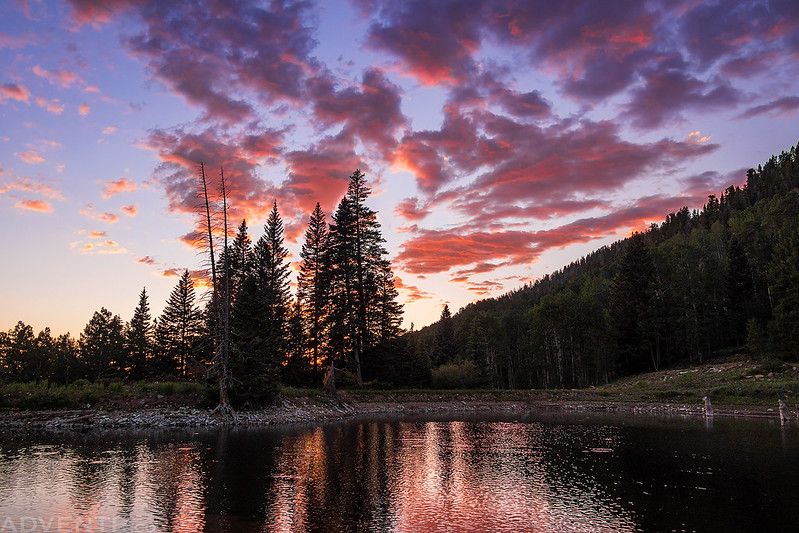 Once it was dark out I read for a little bit and then went to bed early. On Saturday morning I was up shortly before sunrise and started hiking up the Bachelor Basin Trail as the sun was coming up for the day. This trail, which is part of the Trans-La Sal Trail, was pretty overgrown with a bunch of deadfall across the trail and it appears that it does not get used very much.

Starting up the Bachelor Basin Trail. 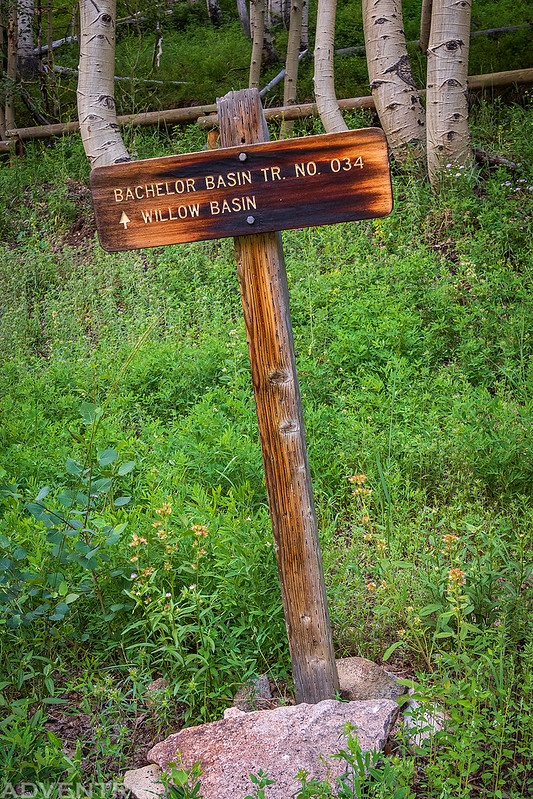 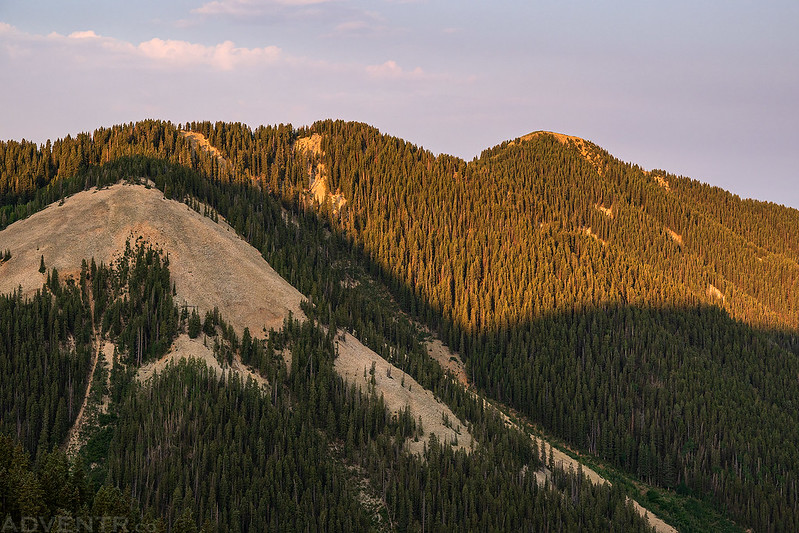 Looking down the canyon I could see the Moab Rim through the smoke in the distance. 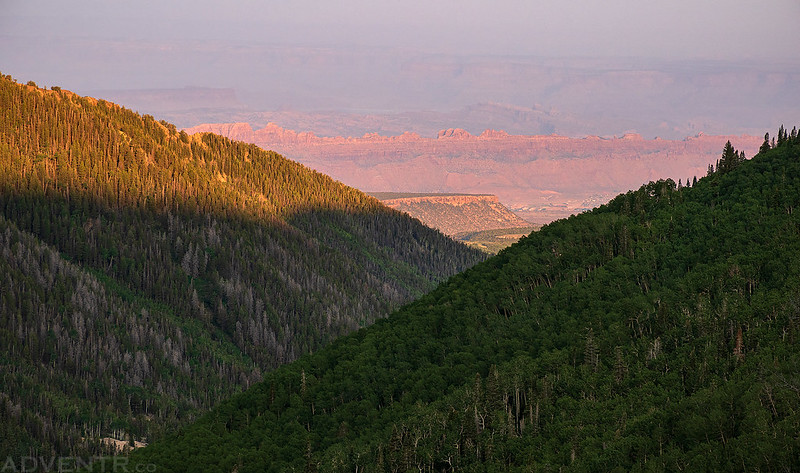 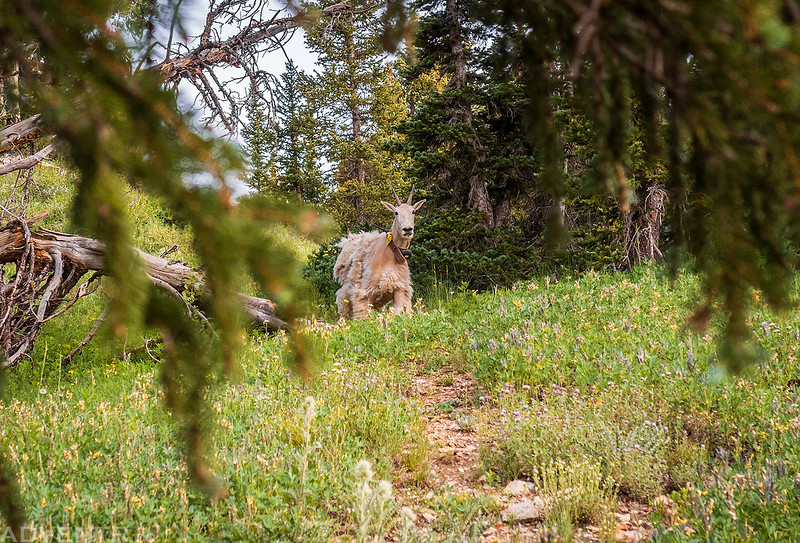 When I reached a clearing on the ridge I turned around for this view of Castle Mountain, Mount Waas and Mineral Mountain. 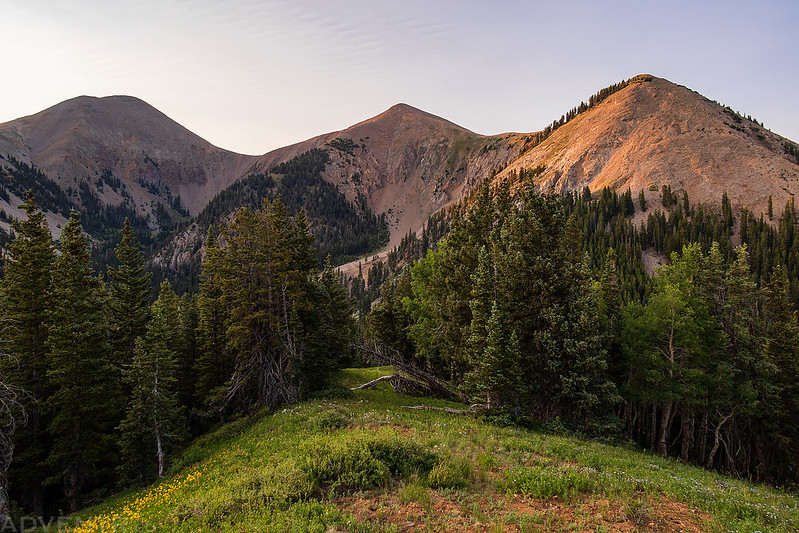 I passed by this post on the ridge- most likely marking an old mining claim. 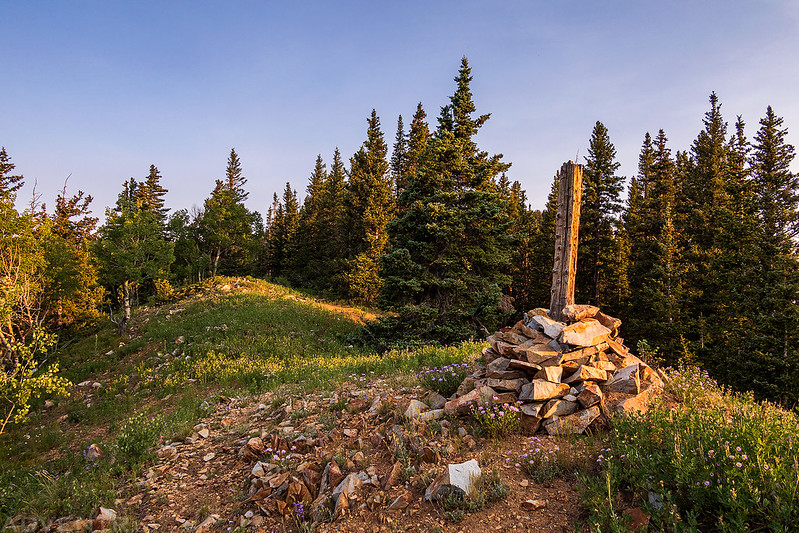 As I followed the ridge to the summit of Horse Mountain I turned around for another look at the La Sal Mountains, and this time I could see Mount Mellenthin and Mount Tukuhnikivatz. 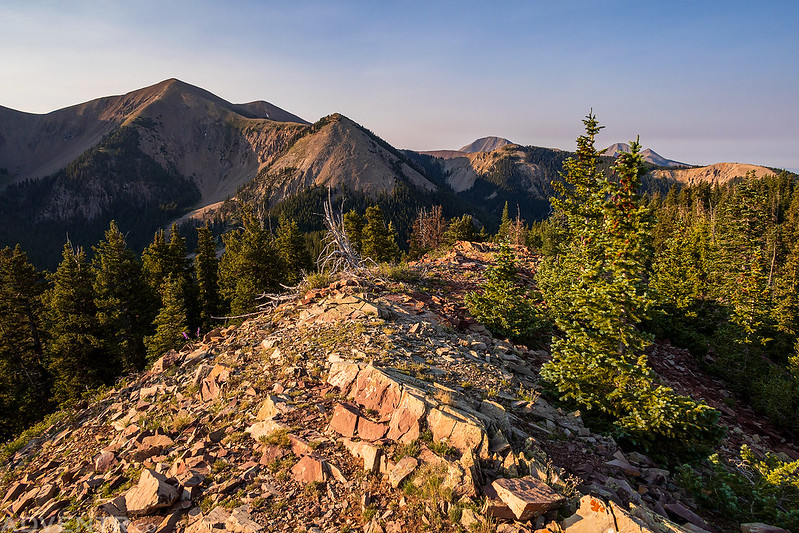 The view above the smoke from the summit of Horse Mountain. 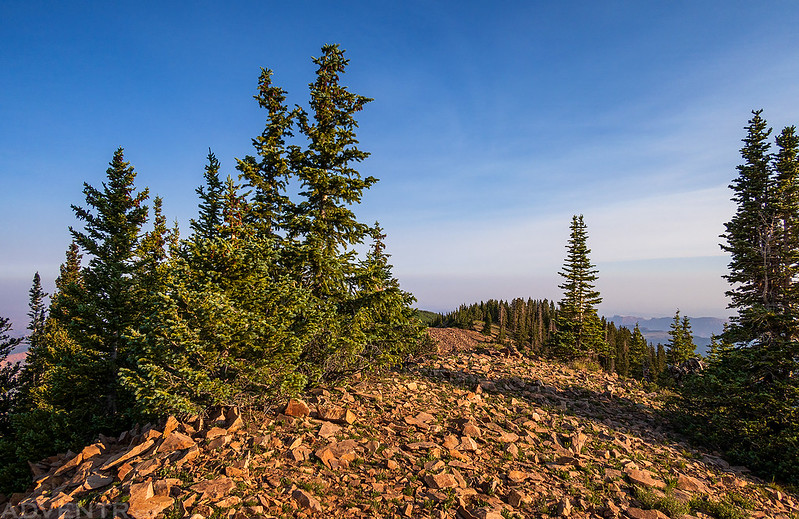 I continued down the ridge on the other side of the summit so I could make my way over to Grand View, which is the bump on the ridge in the middle. 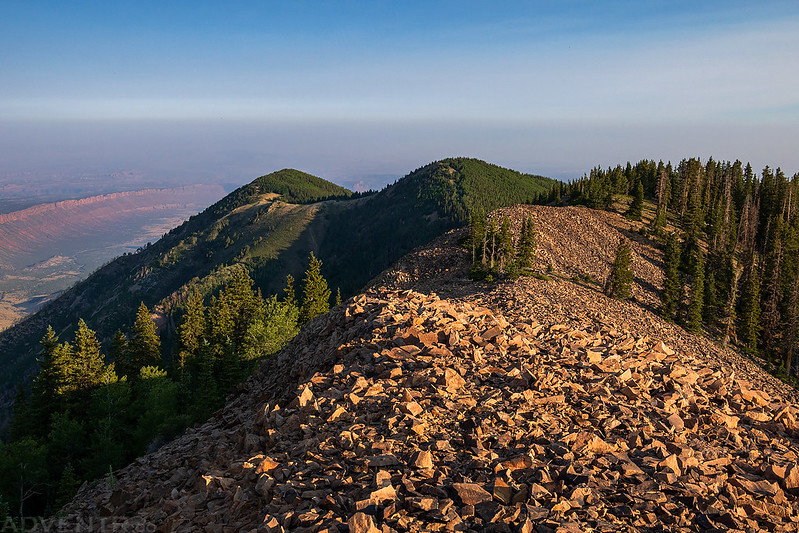 A smoky view over Bachelor Basin and Willow Basin. 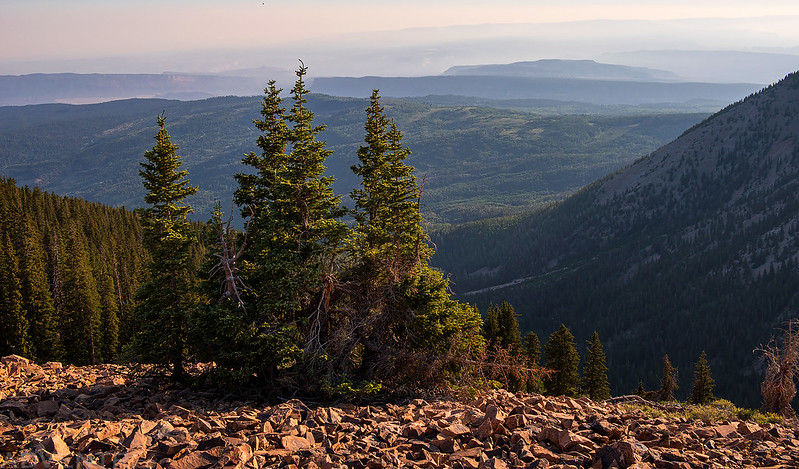 As I walked along the ridge I had a good view of the Porcupine Rim far below. 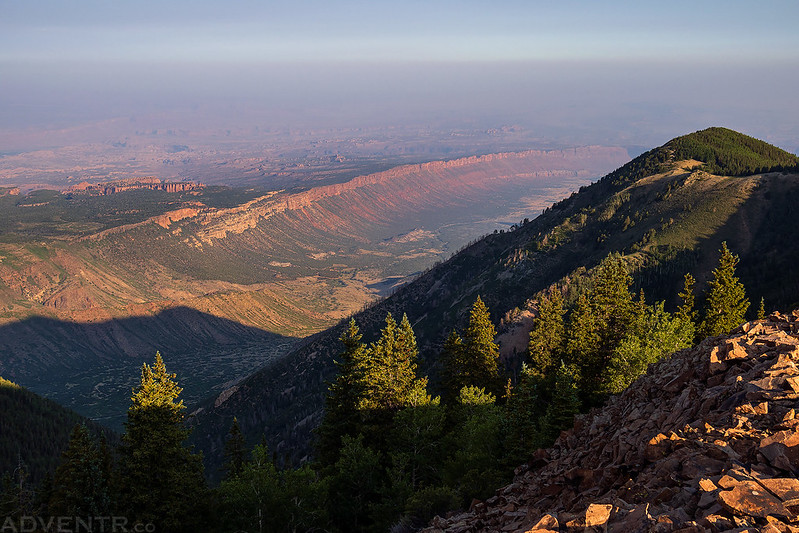 Here’s a closer look with the desert landscape disappearing into the thick smoke. 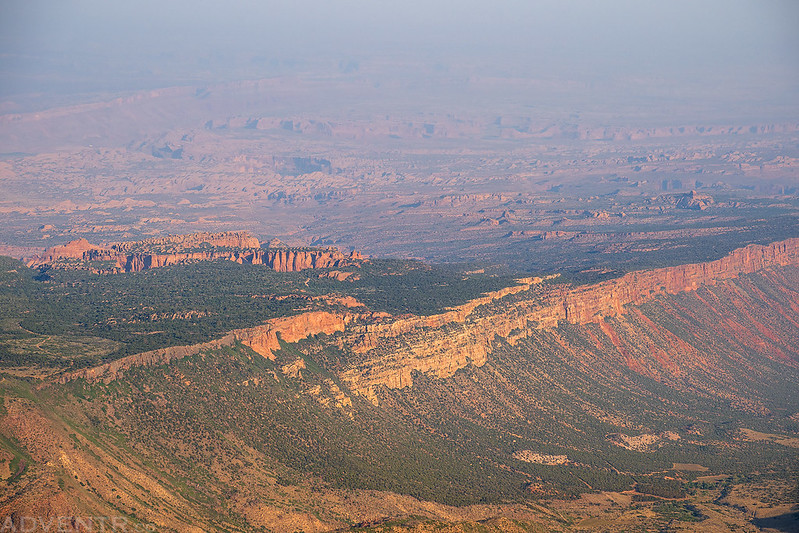 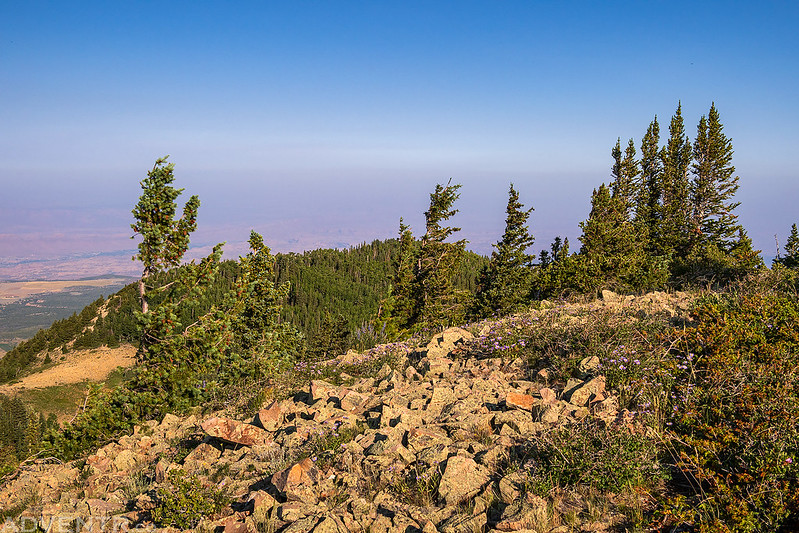 Following the rocky ridge back to Horse Mountain. 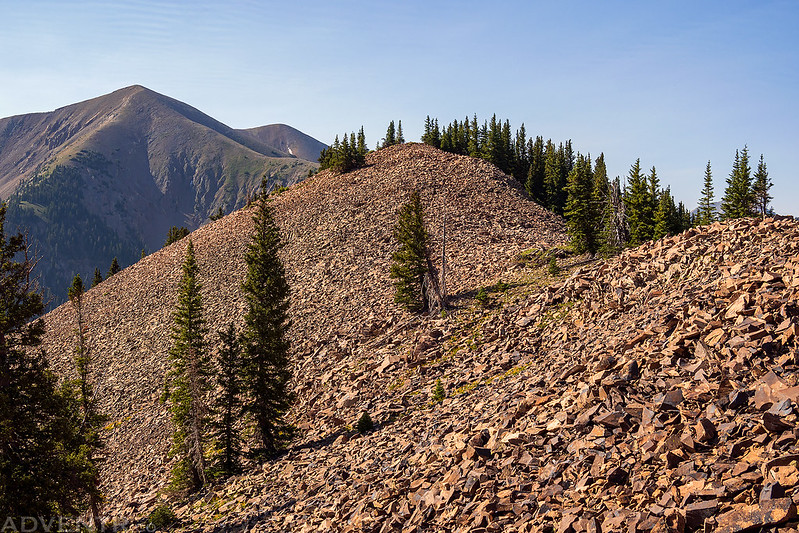 Here’s one last look back over Grand View and Porcupine Rim. The sky above the layer of smoke was pretty blue. 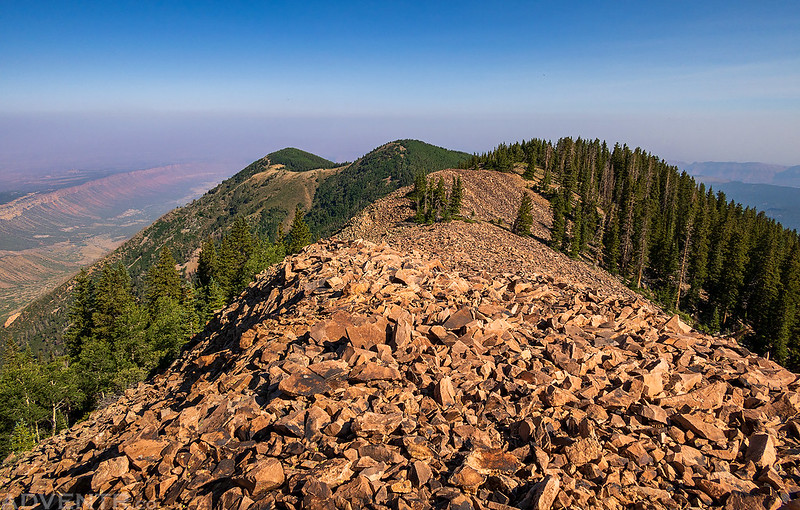 Hiking back down the ridge from Horse Mountain. 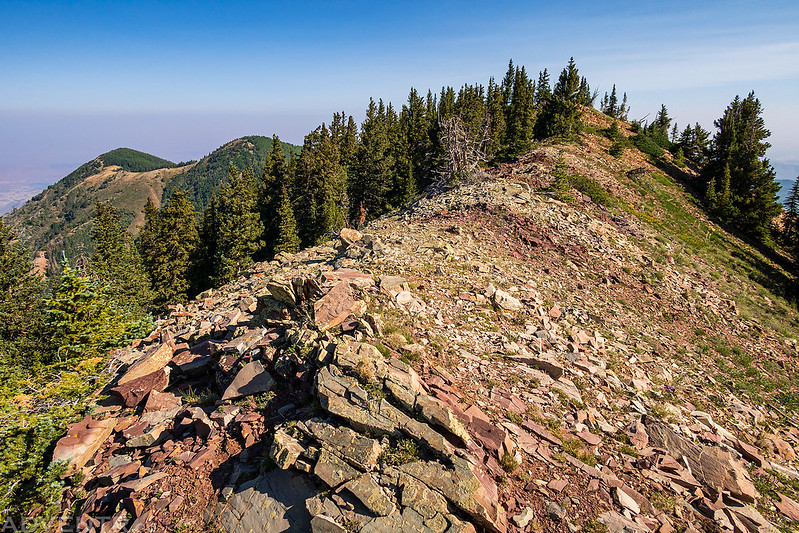 There were plenty of wildflowers to visit along the way. 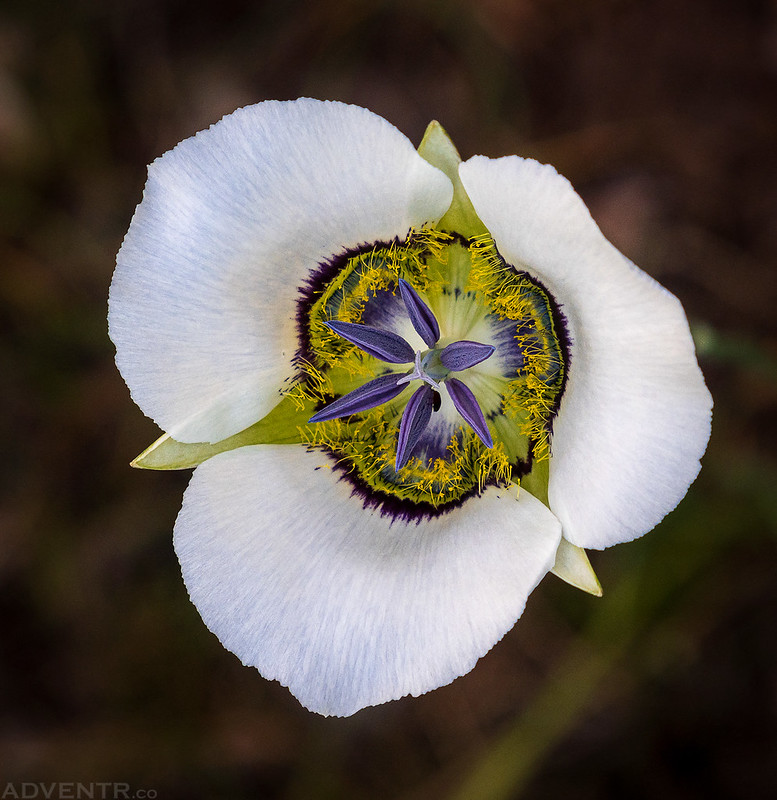 Following the faint Bachelor Basin Trail back down to the trailhead in Miners Basin. 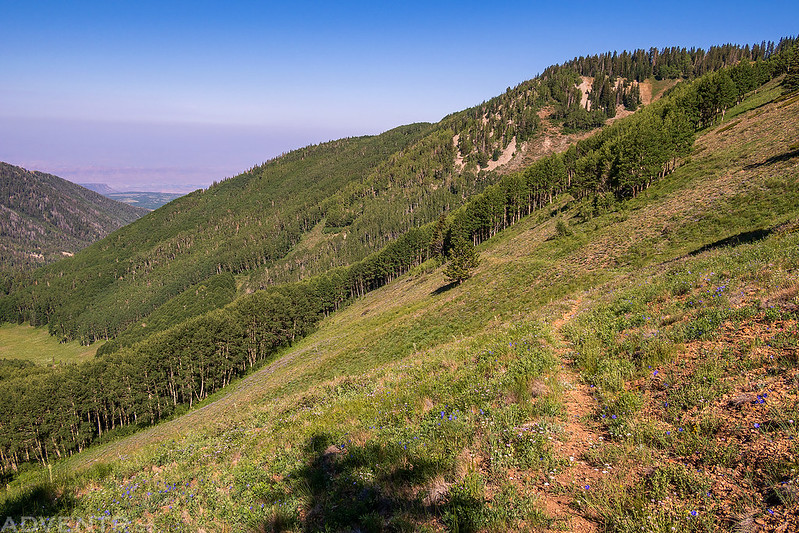 The hike had taken me a little bit longer than I was anticipating, but I still had plenty of time to drive home and rest for a few hours before heading out to the concert in the evening. Even with all the smoke in the air, I still had another nice time in the La Sal Mountains!