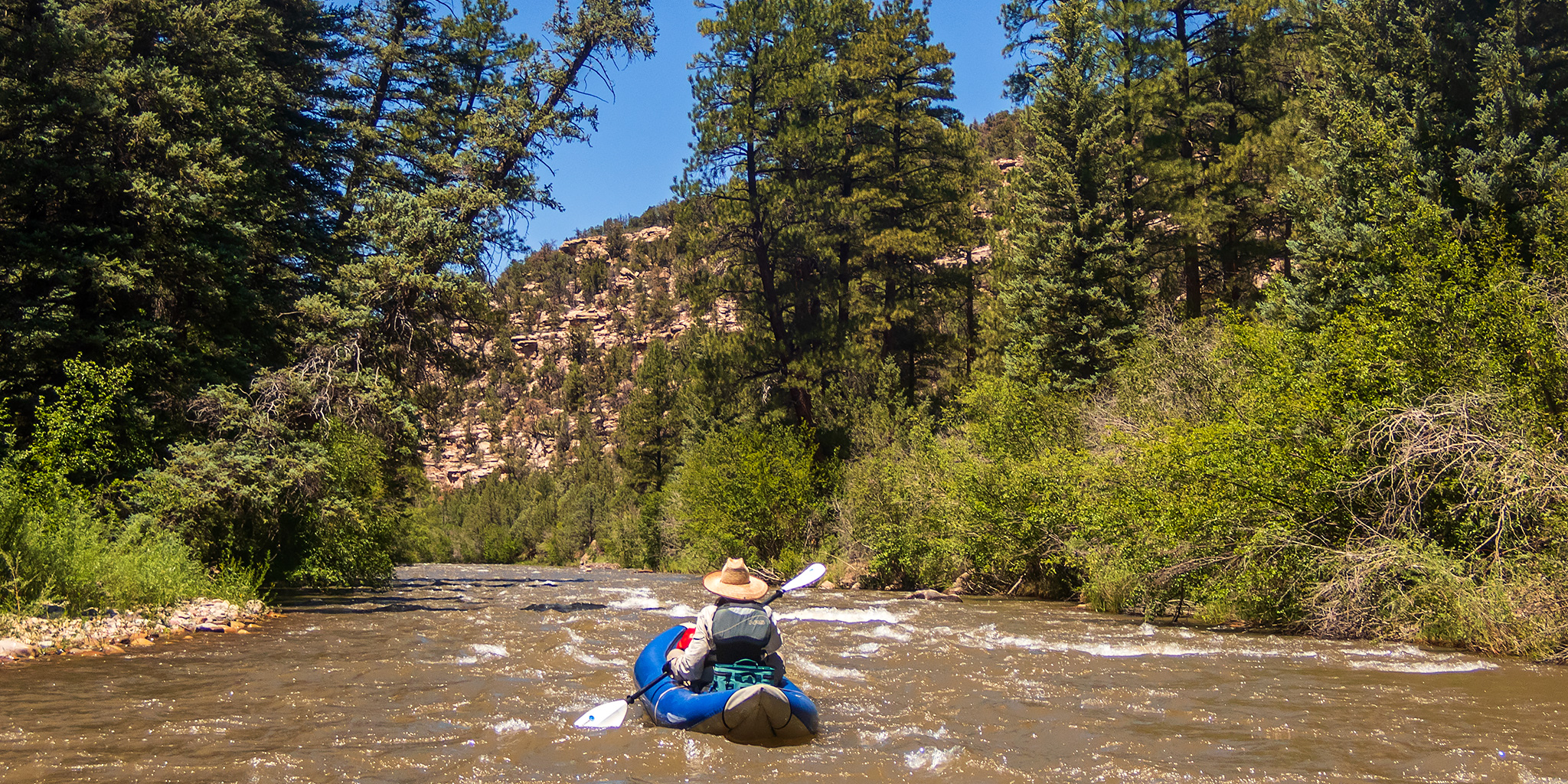 Unfortunately, this is only the first river trip of the year for me, and it feels long overdue! I was really hoping to get in a few more river trips this spring, but thanks to the dismal snowpack and poor spring runoff, things just haven’t worked out for me this year. The smaller desert rivers that I wanted to float did not have enough water and I did not win any permits from the lotteries this year, so lately I have been keeping an eye on some of the rivers in western Colorado hoping that there would be enough snowmelt to run something. This past week it was looking like the San Miguel River was going to be our best bet, and since we had a really nice time on the lower San Miguel River and Hanging Flume Canyon last year, Jackson and I thought it would be nice to check out a new section through Norwood Canyon this time. There is not a lot of info about this stretch of the San Miguel available, but we found enough bits and pieces online that helped us figure out the logistics of the trip. It was going to be another hot weekend on the Colorado Plateau, so we were looking forward to keeping cool on the San Miguel River! 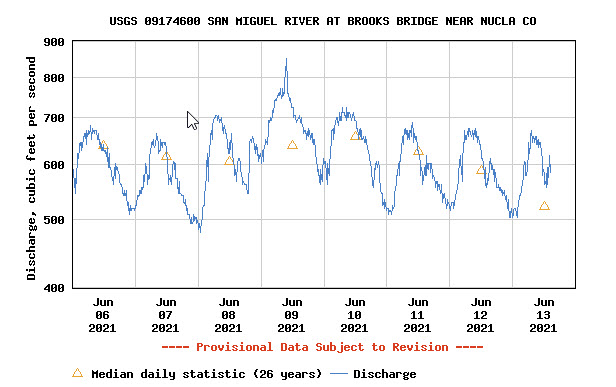 Jackson met up with me at my house early on Saturday morning and then we followed the Unaweep – Tabeguache Scenic Byway around the Uncompahgre Plateau through Gateway and Naturita until we reached our planned take-out at the Green Truss Bridge in Piñon. We left Jackson’s car there and then hopped into my Jeep to finish the drive through Norwood to our put-in at Beaver Creek. We rigged up our boats and were on the river just after 11:00am. Although the air temperature was getting hot out, the water in the river was very cold. It would start to hurt your feet to stand in the water for more than a minute or two, but it did feel nice being splashed when we were moving!

Here is Jackson and our boats at the Beaver Creek Boat Ramp before we got on the water. There were a couple commercial shuttles waiting for boats coming from upstream, but no one else was heading downstream and we would not see another person on the river all day. 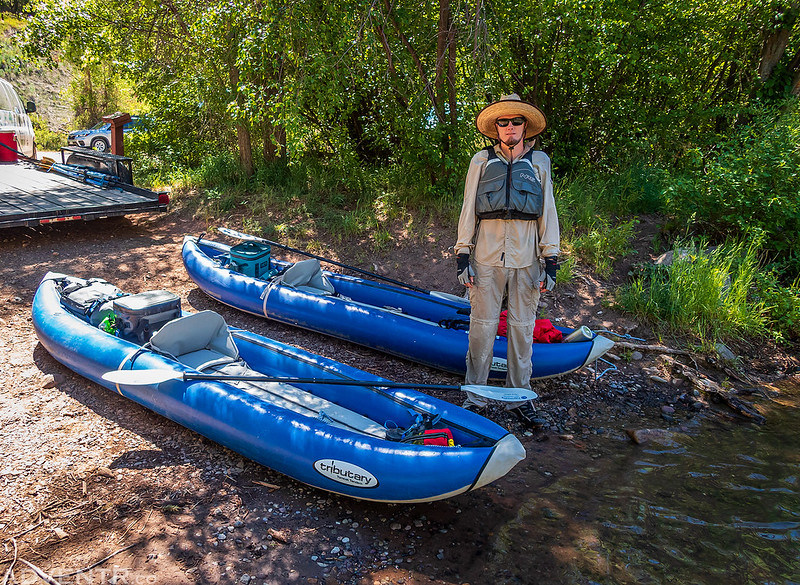 Jackson took off ahead of me as we started down the river. 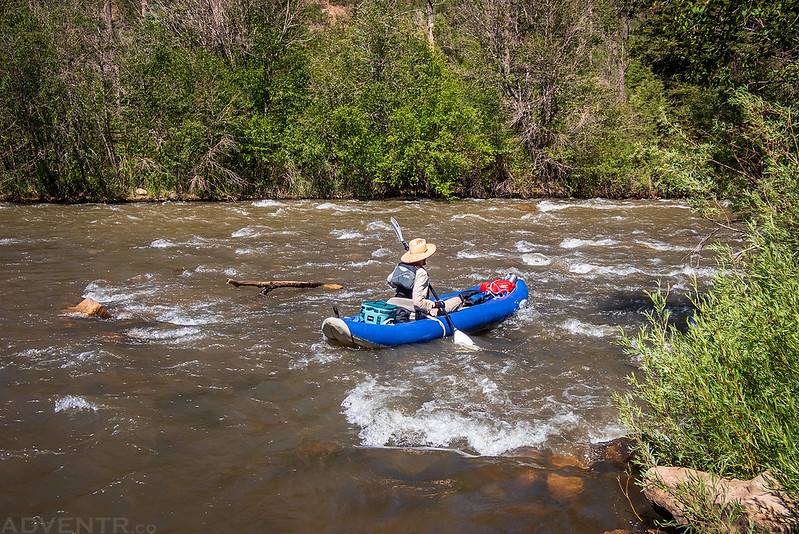 The river started out fast and rocky! There was no time to take a break from paying attention to what was ahead and no time to mess with my camera, so I didn’t get many photos from this section. Once we had an opportunity to get off to the side and take a break, we did… 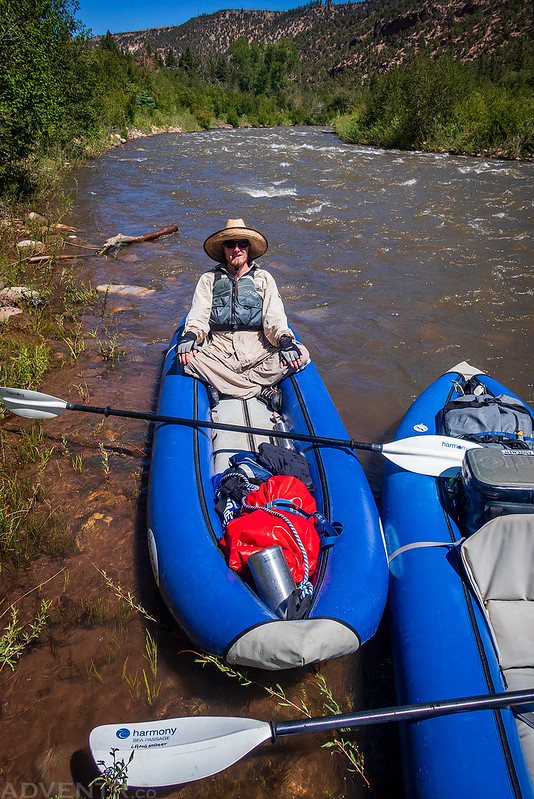 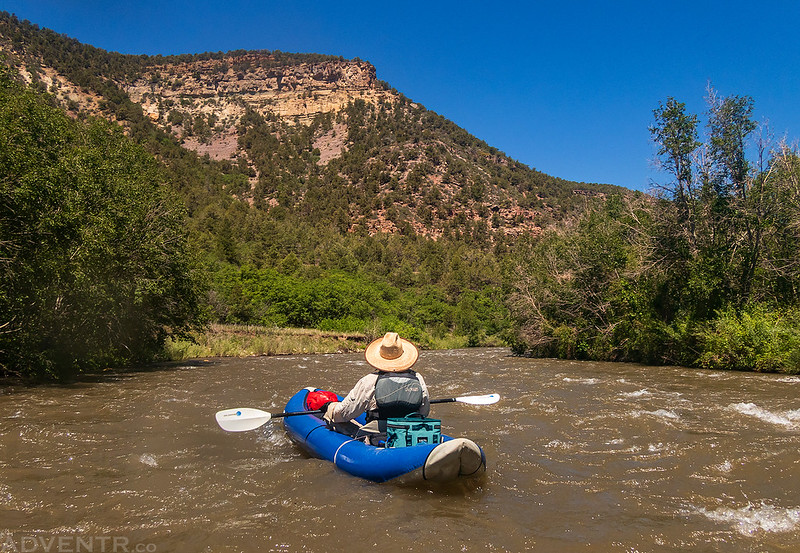 We found an eddy and stopped for a quick lunch on some rocks. 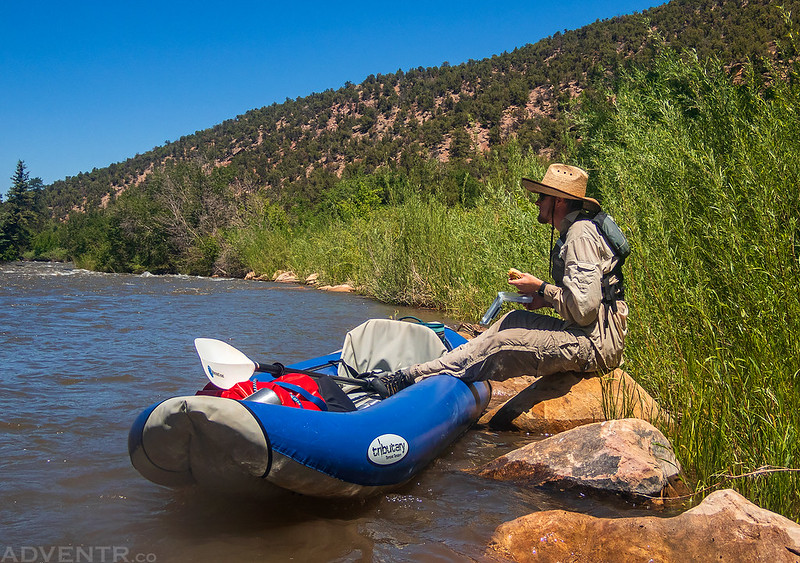 Jackson paddling back into the current after lunch as we continued down the river deeper into Norwood Canyon. 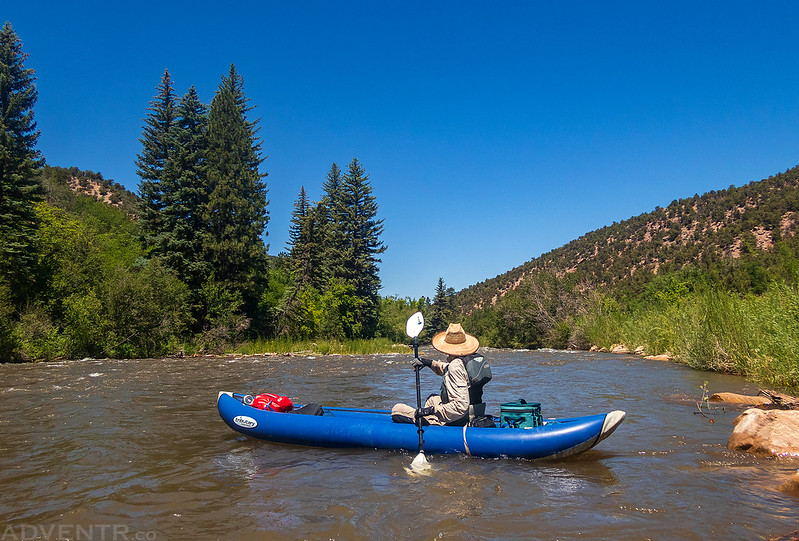 It appears that this fence across the river was raised during the spring runoff. That’s nice of them! 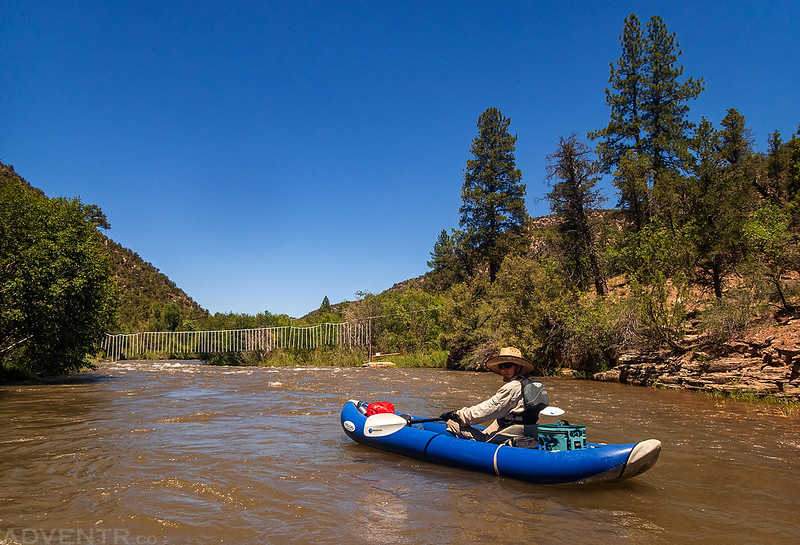 I’m not used to paddling though such large trees, so it was a new experience for me. 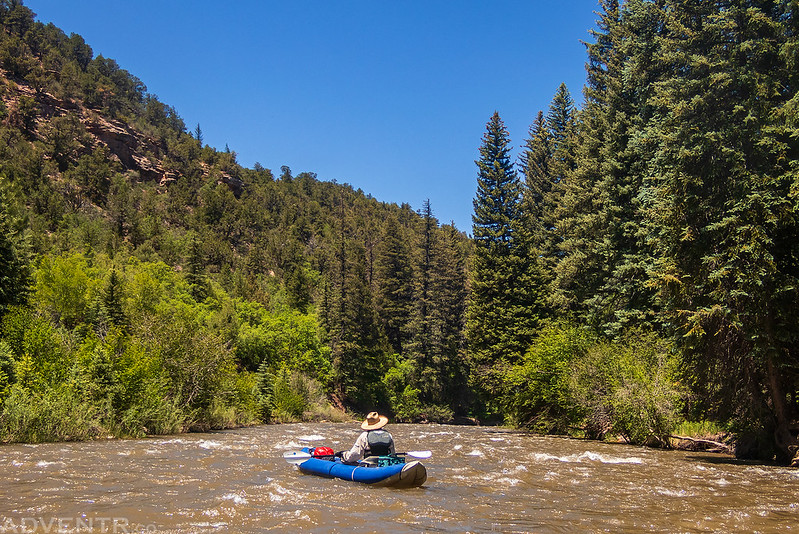 We came across this river-wide strainer and had to get out and lift our boats over it. I’m glad we don’t have bigger and heavier boats! 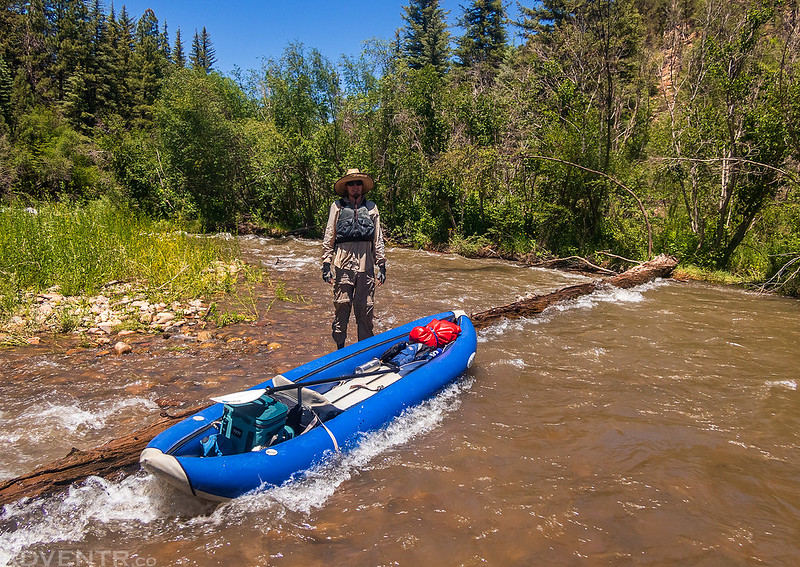 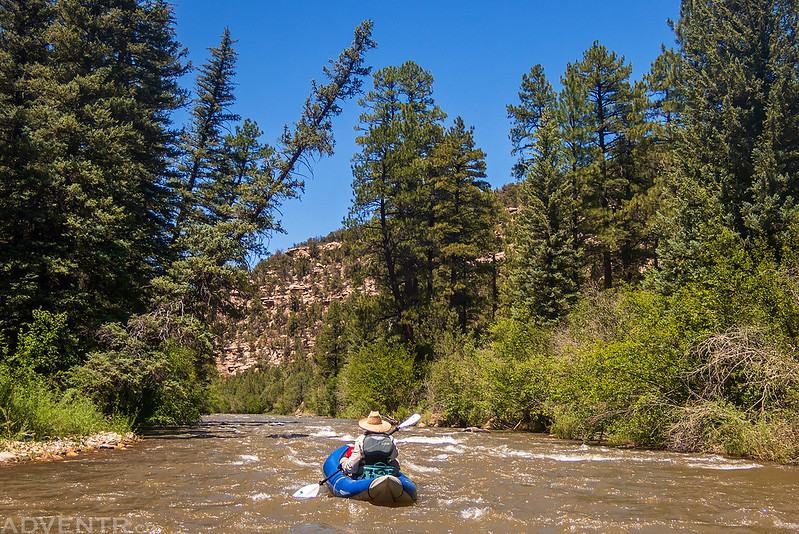 Jackson thought that large boulder in the water looked like a horse’s head. 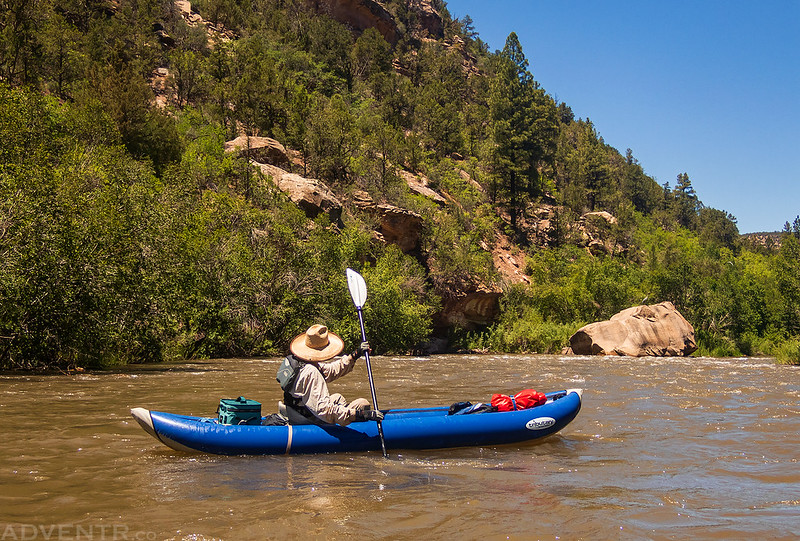 Passing by the mouth of Horsefly Creek on the right. 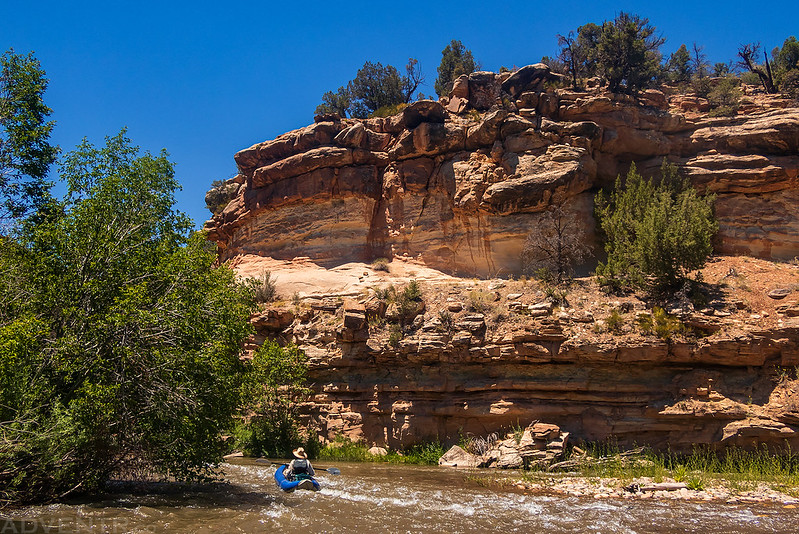 We stopped and got out to scout the low head dam for the CC Ditch, which curiously was closed and not diverting any water. Apparently this dam used to be very dangerous (low head dams are referred to as ‘Drowning Machines‘), but a few years back it was modified to make it safer. We ended up running it right down the middle and had no problems. 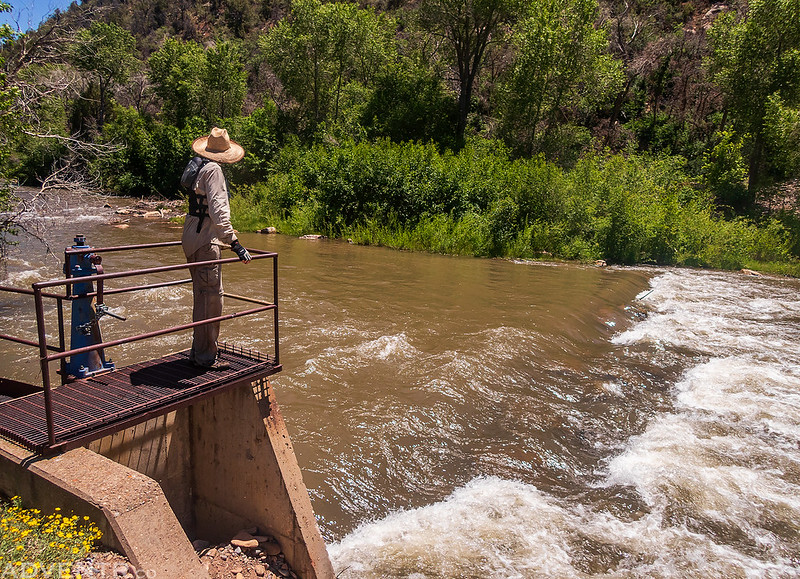 As we continued, the canyon started to resemble the scenery I am used to seeing on a river trip and the water was now a bit warmer. 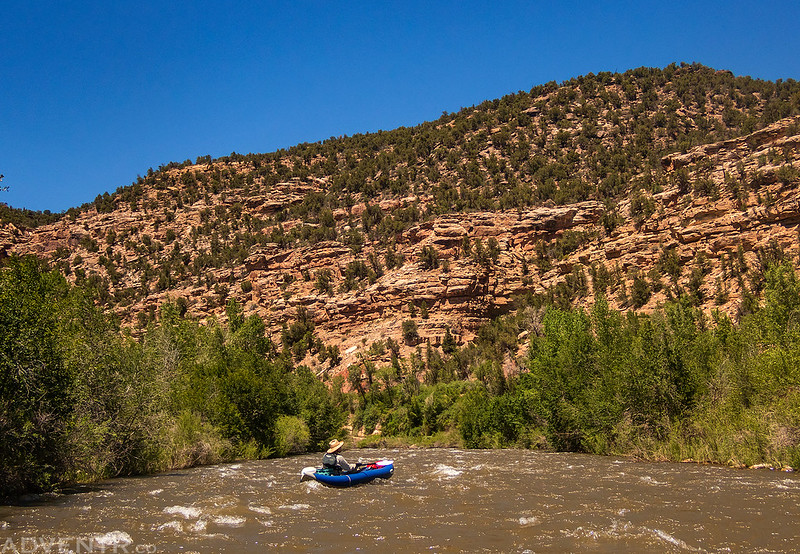 The second half of the trip was not as fast-paced as the beginning, so it was a bit more relaxing, too. 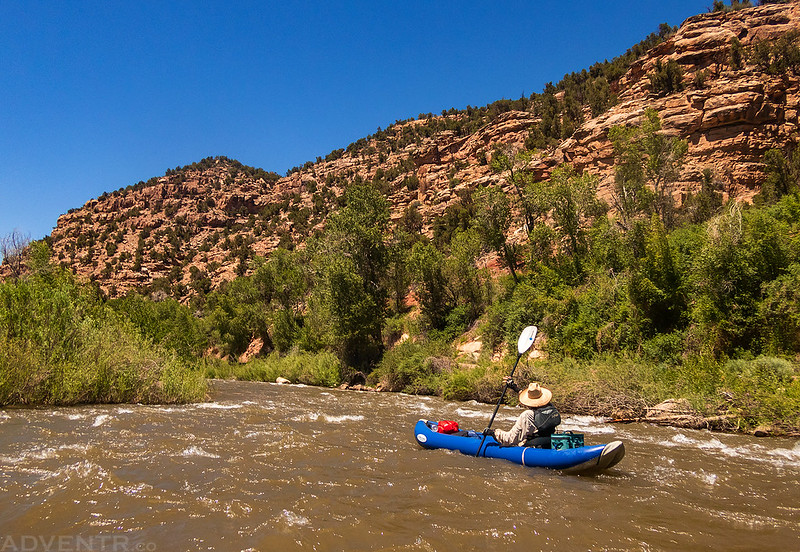 When we reached the boat ramp at The Ledges – Rock House Campground, we got out to check it out. We noticed that it looked like the campground had been flooded recently and many of the campsites were covered with debris. This was strange, since there had been no rain recently. Then we noticed on the hillside above that they repairing a canal. The canal must have breeched which caused the flood in the campground, and that’s why the diversion at the dam was closed. It all made sense now!

It’s hard to see in this photo, but you can see the debris flow and the spot they were repairing the canal. 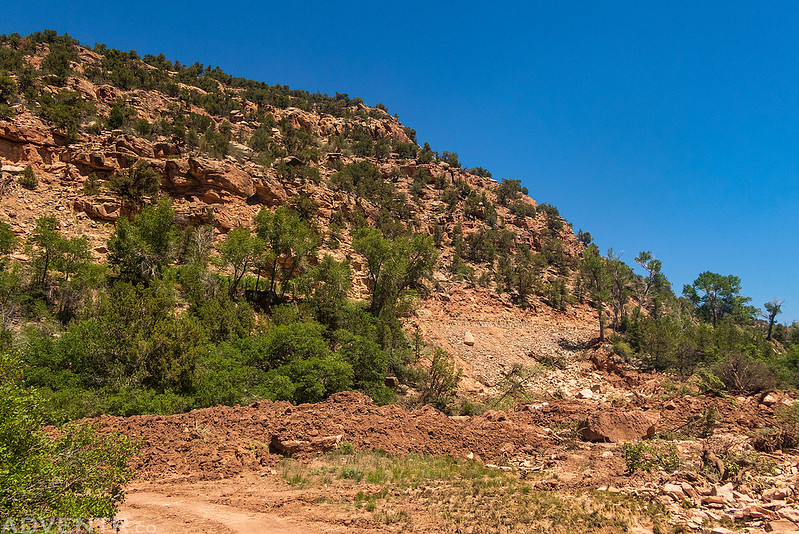 Back on the San Miguel for our final few miles through a section known as The Ledges. I guess this part of the river can have some nice waves to play in, but at this water level there really wasn’t much there. 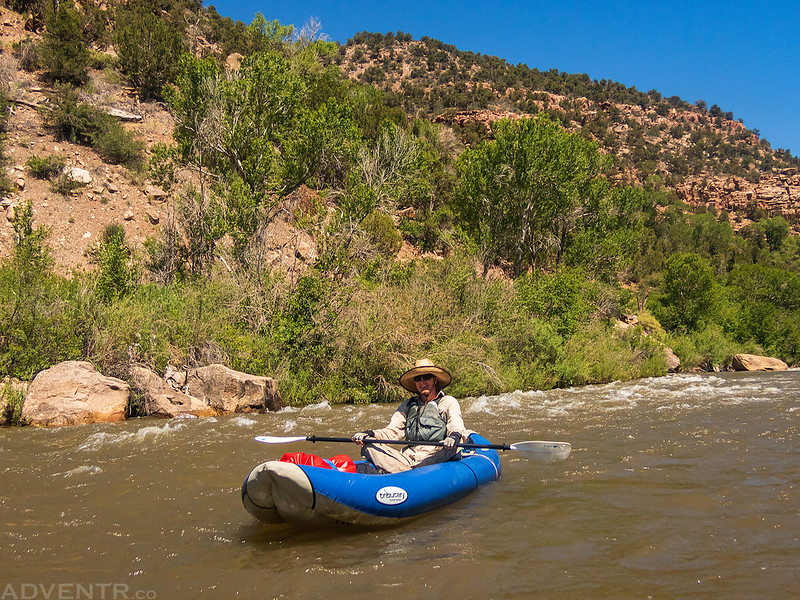 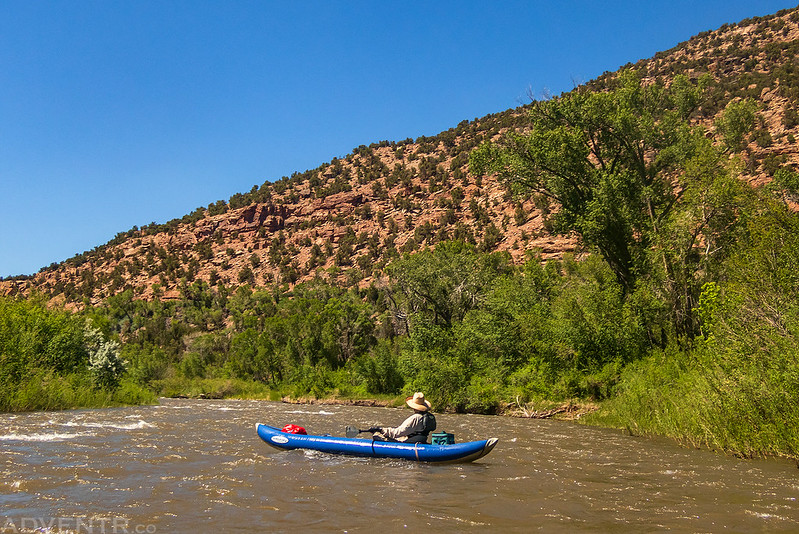 We took off of the river just before the Green Truss Bridge at Piñon. 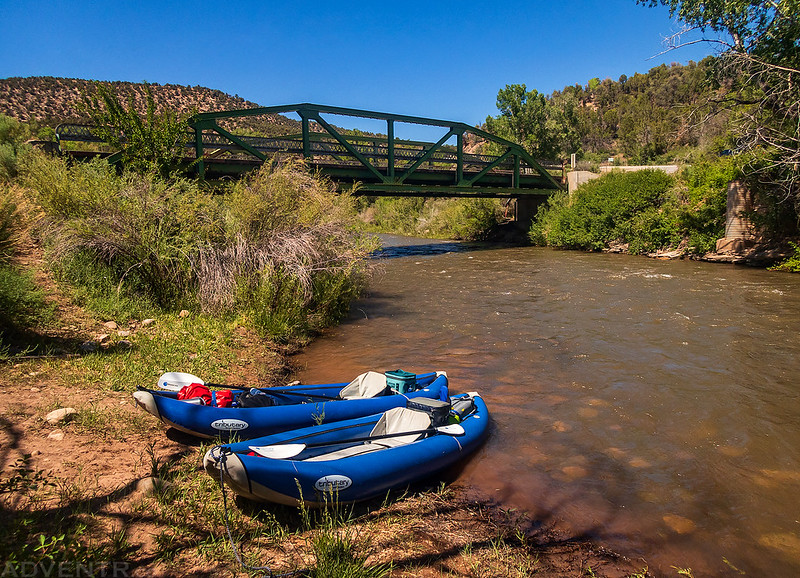 Once we got our boats and gear loaded into Jackson’s car we headed back to Beaver Creek to get my Jeep and then parted ways. Jackson was going to head back home through Ridgway, but I was going to stick around and find a spot to camp near Lizard Head Pass so I could get in a short hike on Sunday morning before heading home. We had a very nice afternoon floating a new section of the San Miguel River through Norwood Canyon!

Published in Exploring, Paddling and Rafting