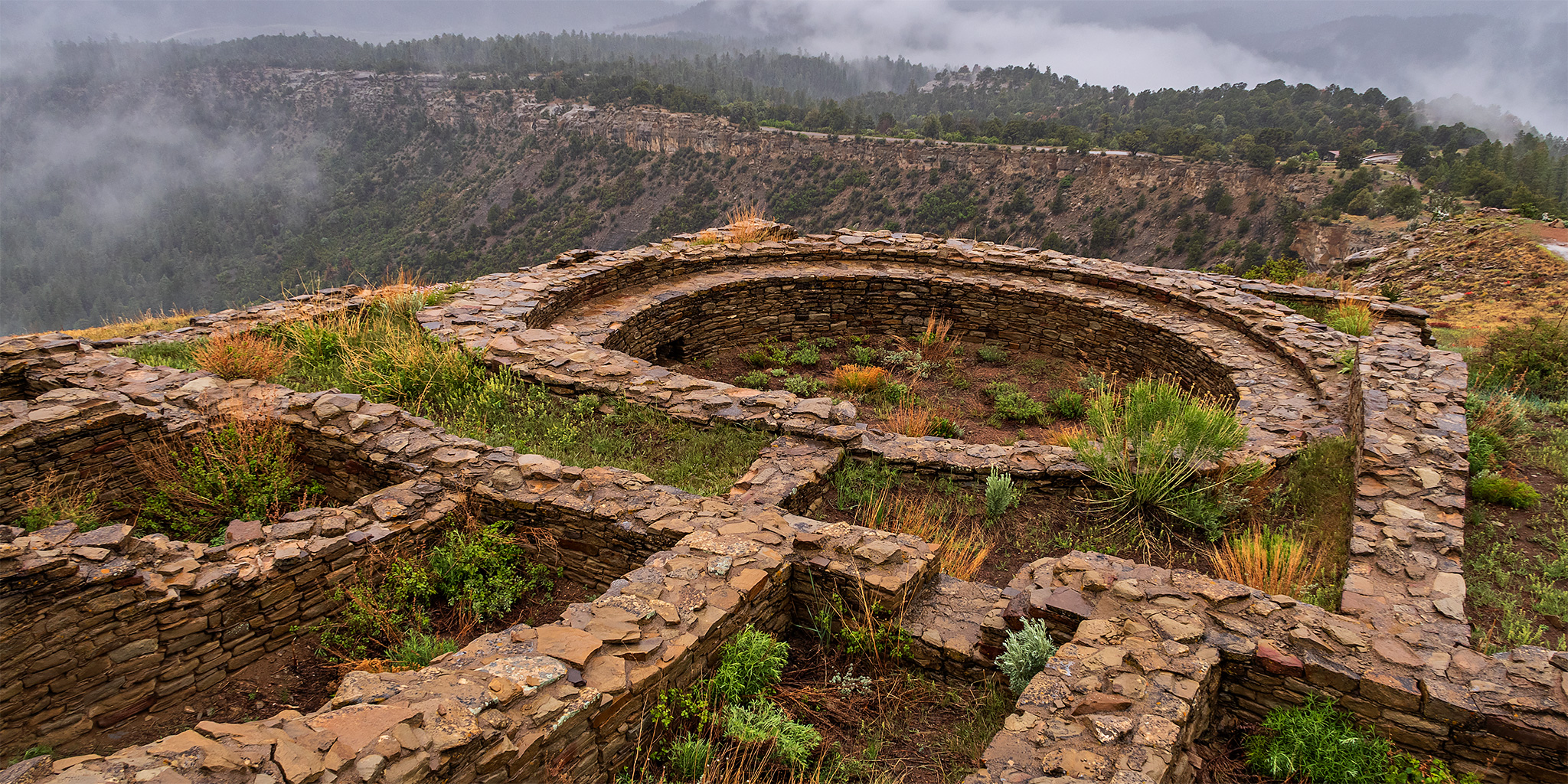 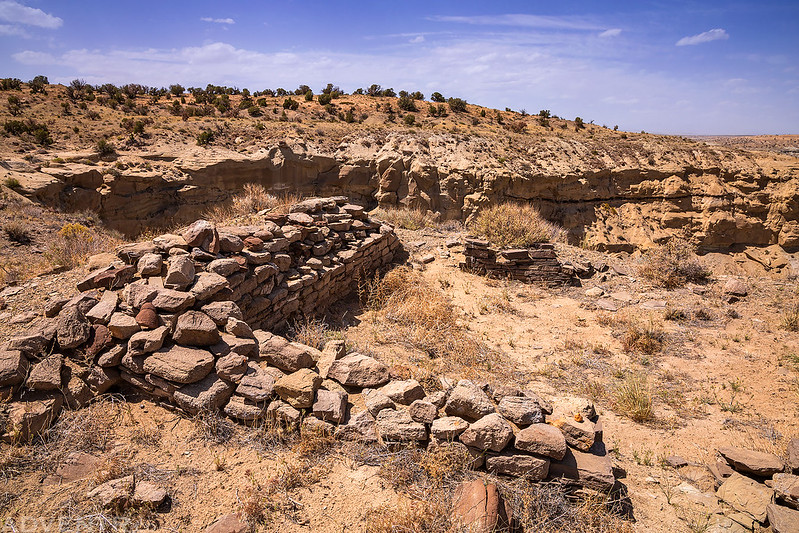 Here’s a view of the Twin Angels Great Kiva over Kutz Canyon with Angel Peak visible over the horizon. It was very windy out when we hiked out to this site and the air was hazy and full of dust. 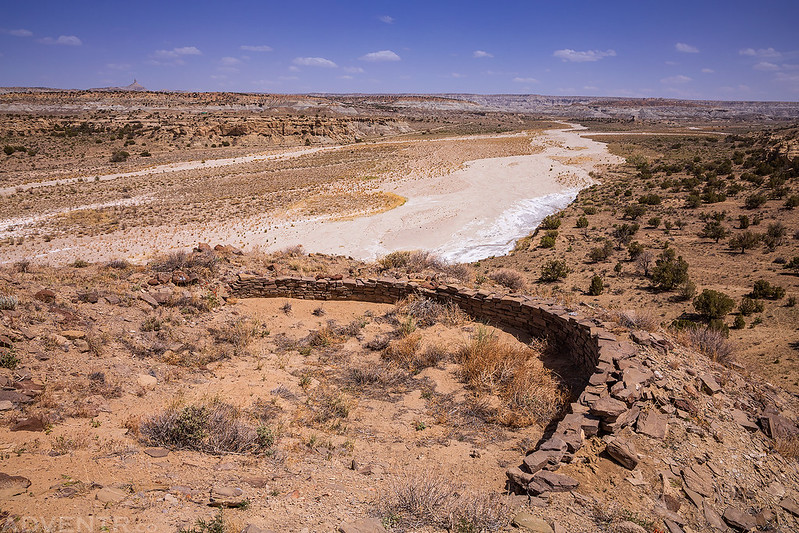 Just as the weather forecast had predicted, the rain arrived overnight and would continue throughout the day on Friday. Diane and I had no problems continuing on with our plans to visit Chimney Rock National Monument in the rain and were actually looking forward to it since we thought it might keep the crowds away. We were a little worried that the park would not allow us to hike the trails in this weather, but we took our chances and headed over to the park anyway, arriving shortly before they opened at 9:00am. Although they tried to discourage us from hiking the Great House Pueblo Trail in this weather, they left the decision up to us, so of course we went! Since it rained the whole time we were at Chimney Rock, I left my normal camera in the Jeep and only took my little point and shoot camera since I had a better chance of keeping it dry, although I still had a hard time keeping water drops off the lens, so my photos from today aren’t that great…

This was our first view of Chimney Rock through the rain and clouds as we neared the park. 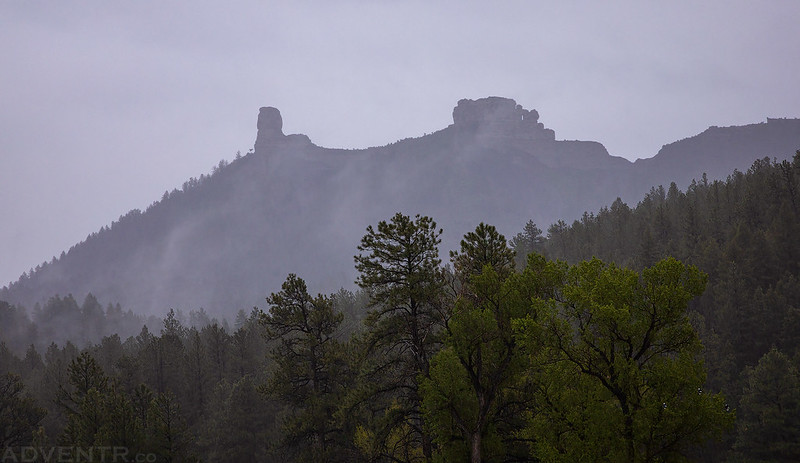 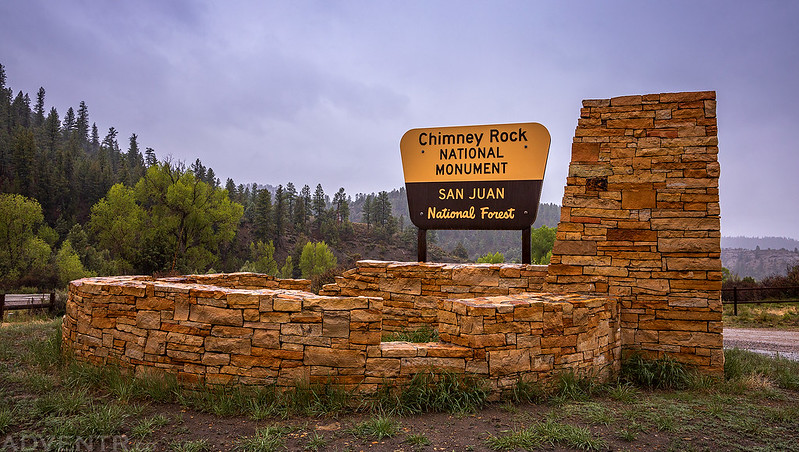 First we hiked a short loop on the paved Mesa Village Trail. 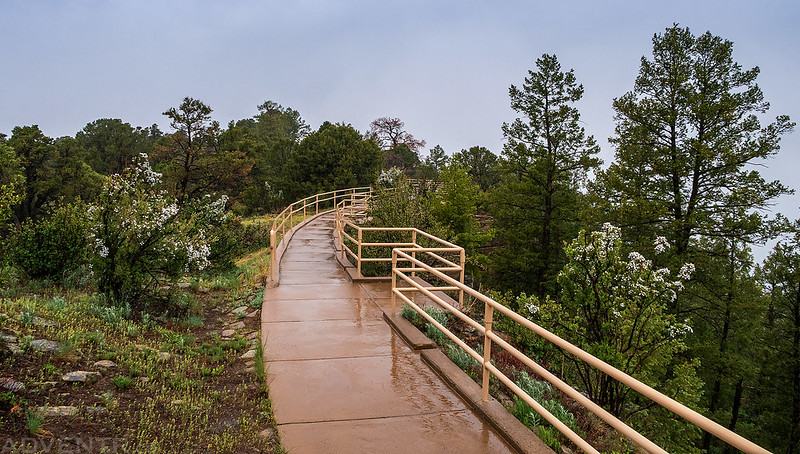 The view from above the clouds was nice. 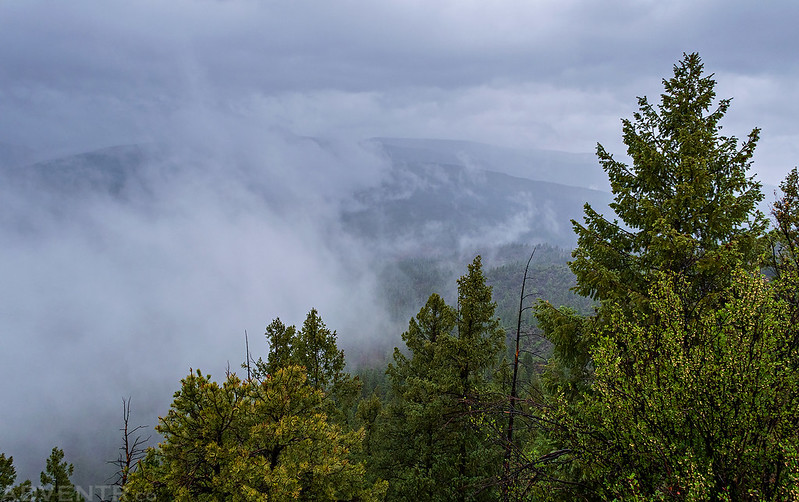 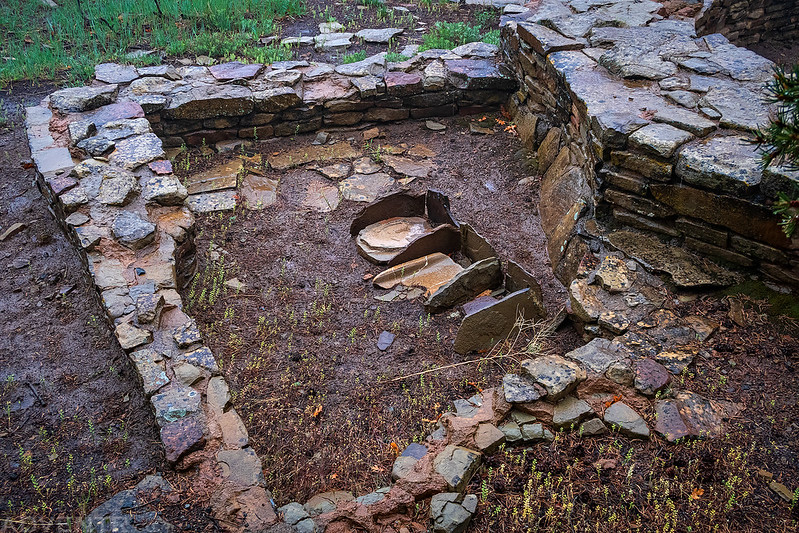 These metates and manos were soaked from the rain. 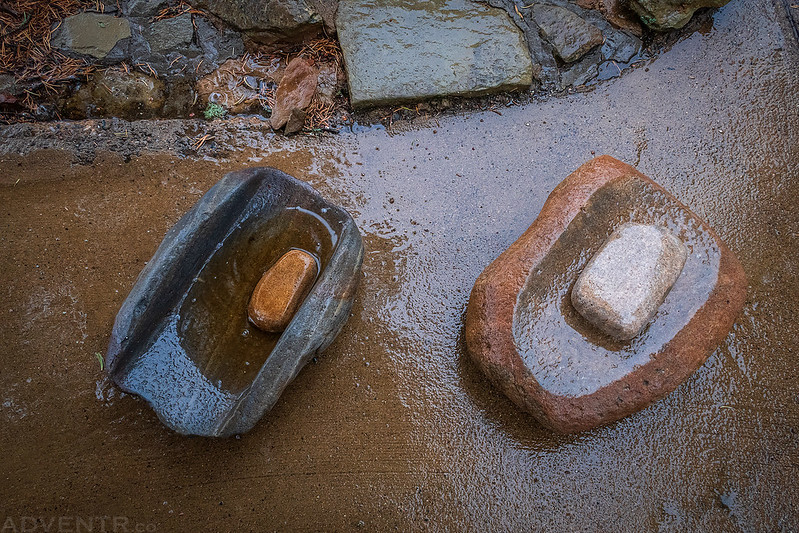 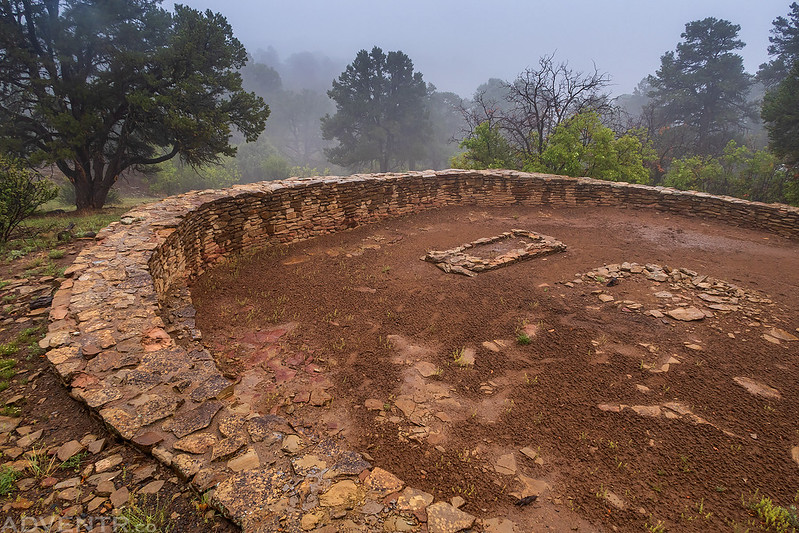 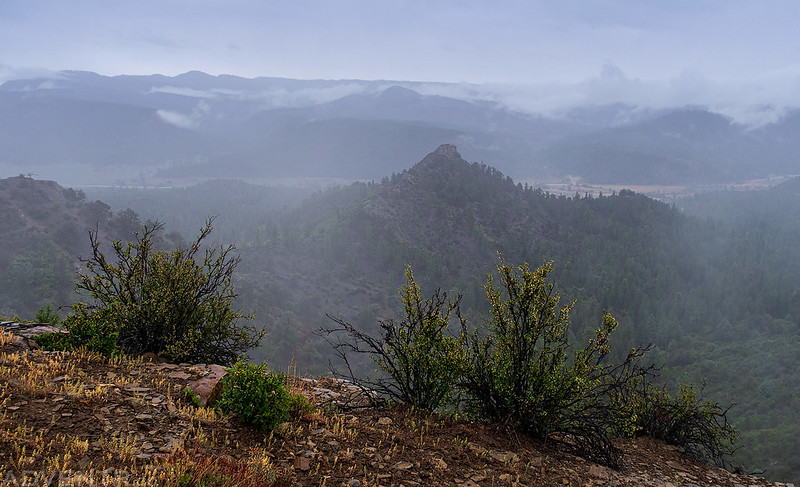 Hiking into the clouds on the Great House Trail. 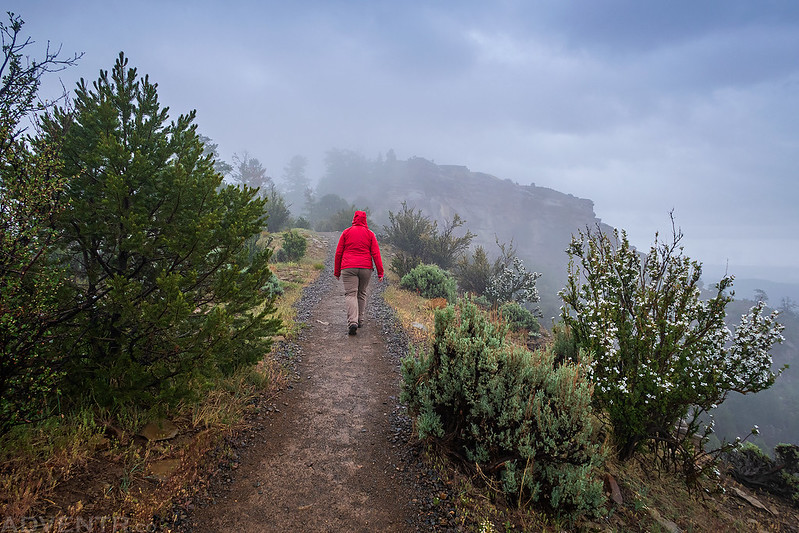 The narrow and rocky trail was not difficult at all, even in this weather. 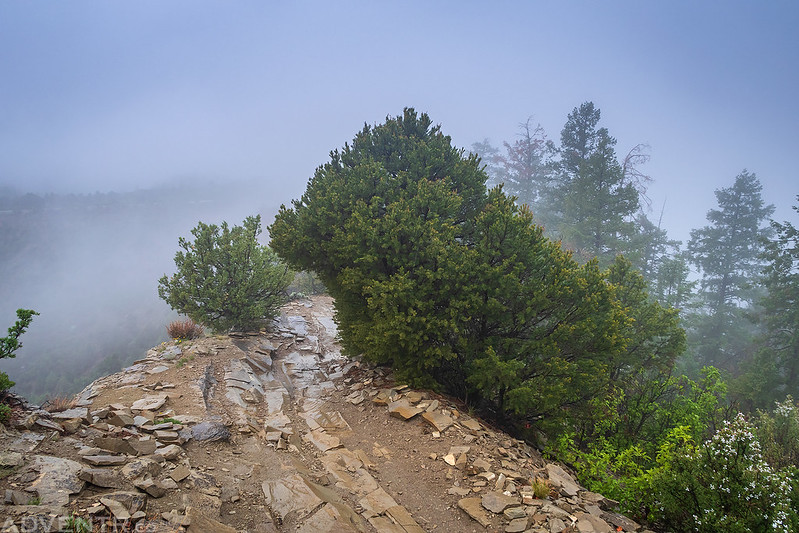 Looking back down the trail as we climbed higher towards Chimney Rock. 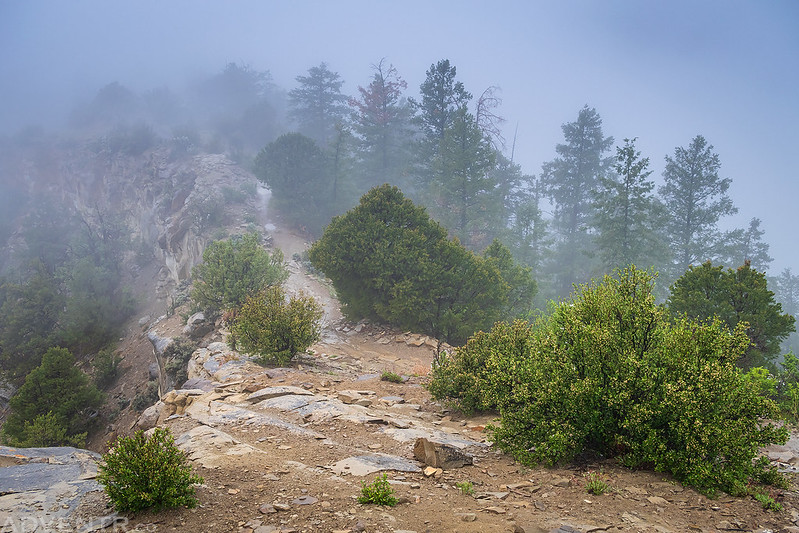 Diane In The Rain 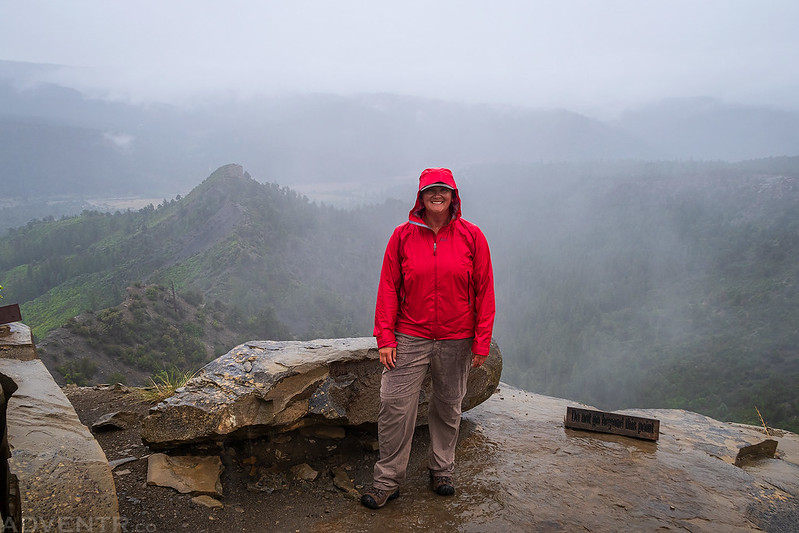 Chimney Rock in the Rain 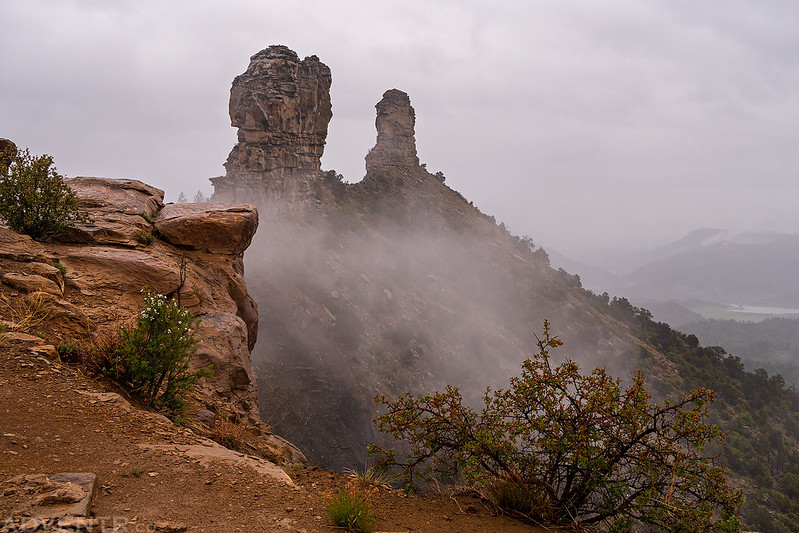 The end of the trail next to the foundation of the old Chimney Rock Lookout Tower. 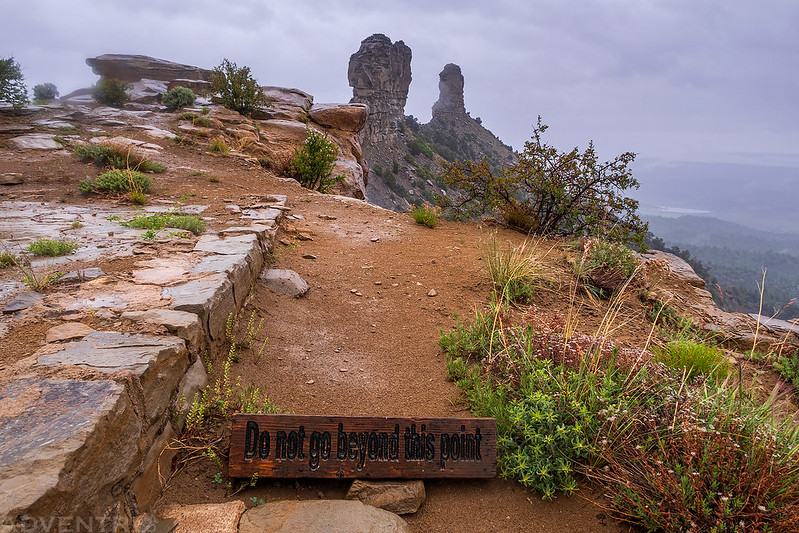 Kiva In the Clouds 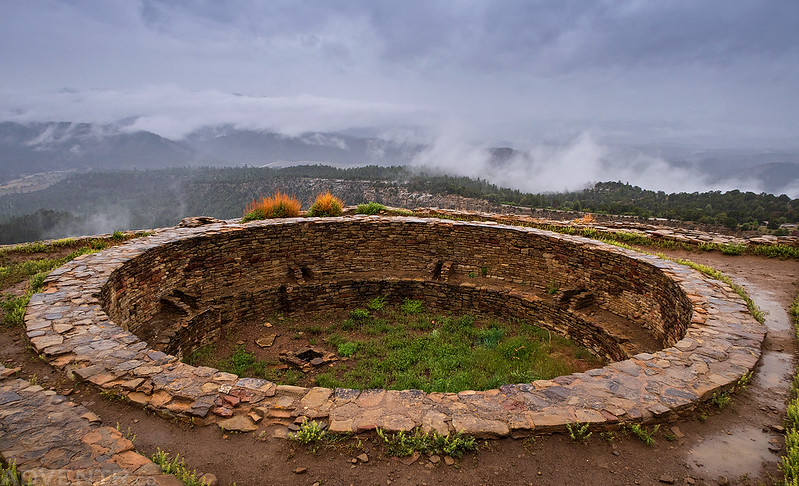 A view from the ruins over the Piedra River Valley. 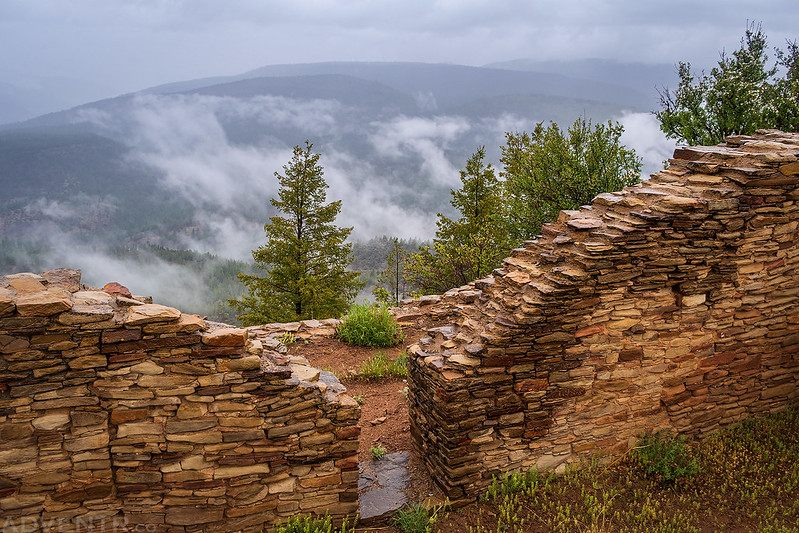 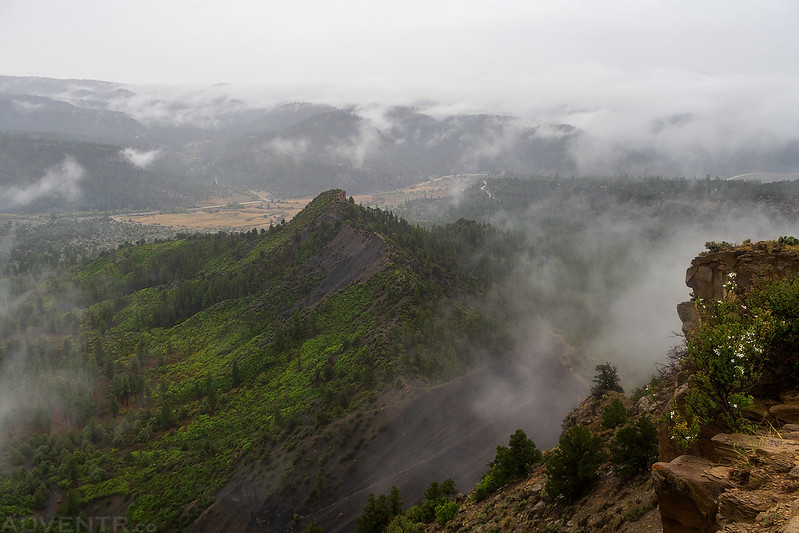 Great House in the Clouds 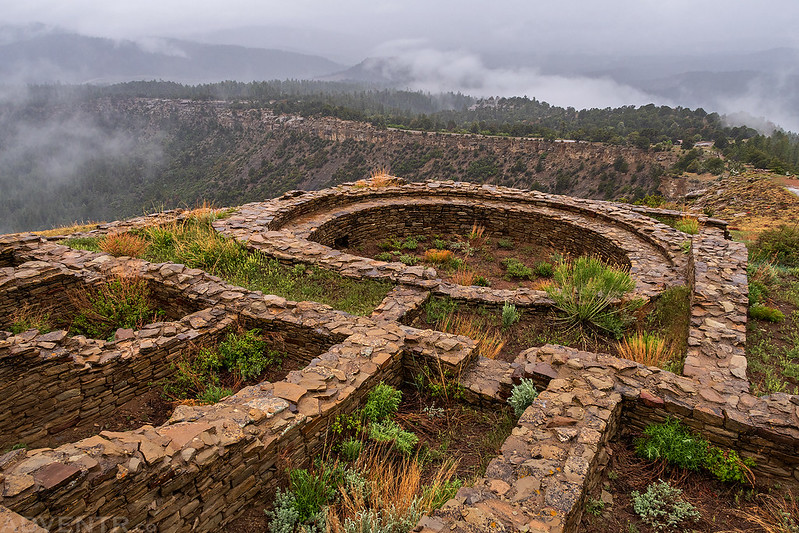 Ruins With A View 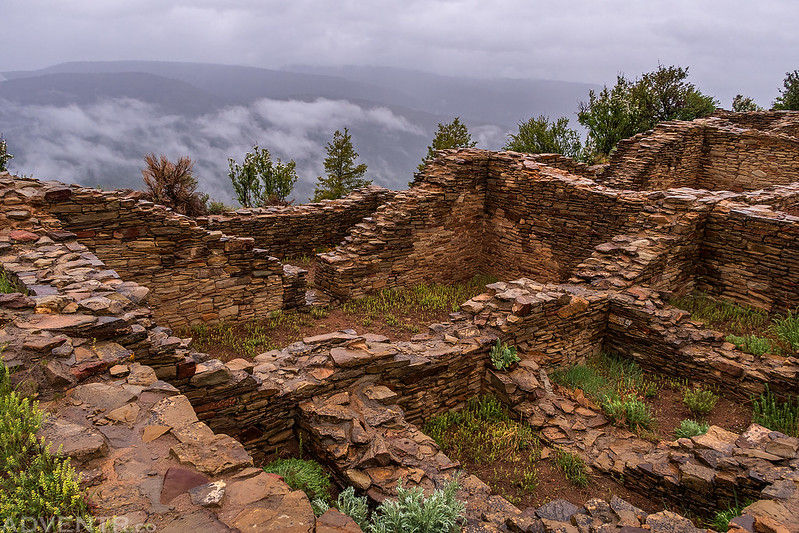 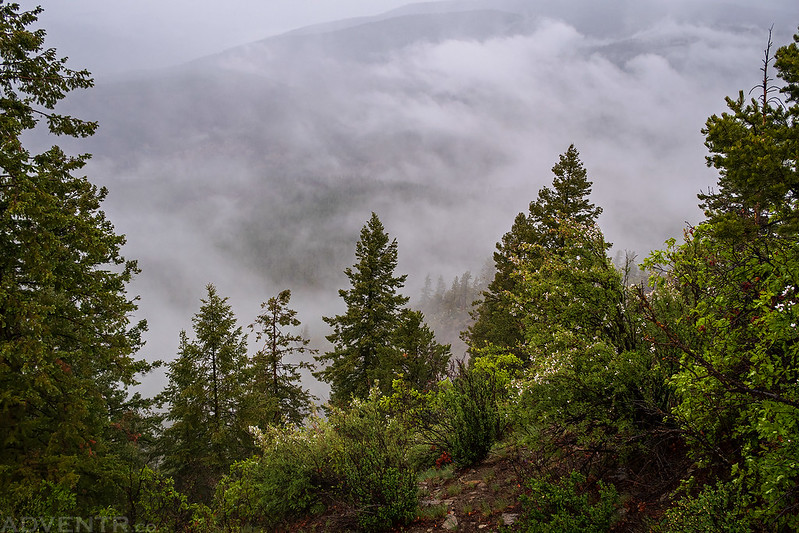 Headed back down the Great House Trail. We were soaked and cold by the time we returned to my Jeep, but it was worth it since we pretty much had the place to ourselves this morning! 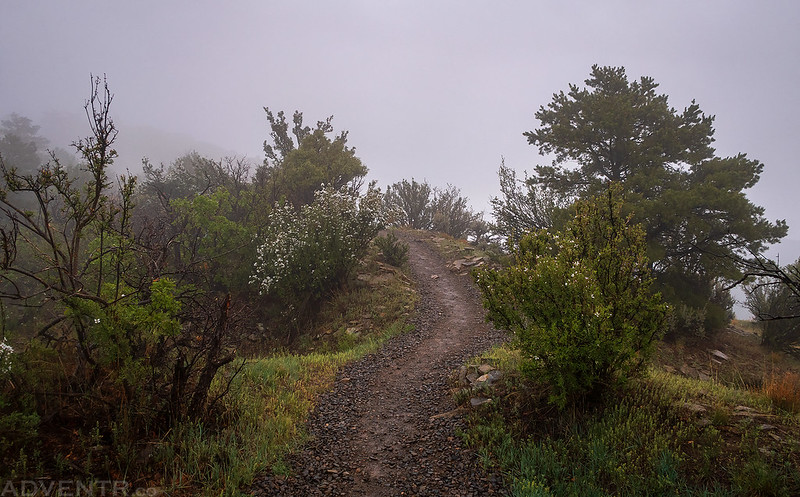 Since the rain was still coming down when we left Chimney Rock I decided it would be best to head back home the long way around the mountains since I didn’t want to deal with snow on Red Mountain Pass. Later I would find out this was an excellent choice since the pass would get shut down for a couple of hours because a truck that didn’t chain up slid off the road. As we drove through the Montezuma Valley below Mesa Verde I realized that we would be passing near the Lowry Pueblo, which Diane had never been to before, so I figured we might as well make one more quick stop at our fourth Chacoan Outlier of the week… 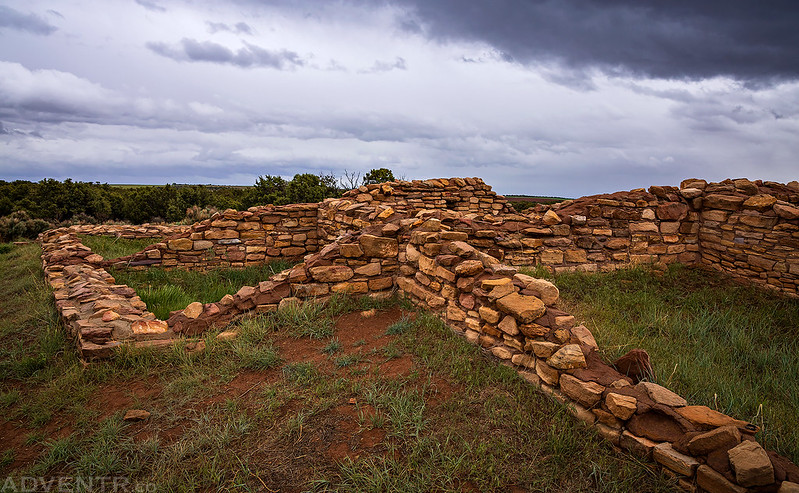 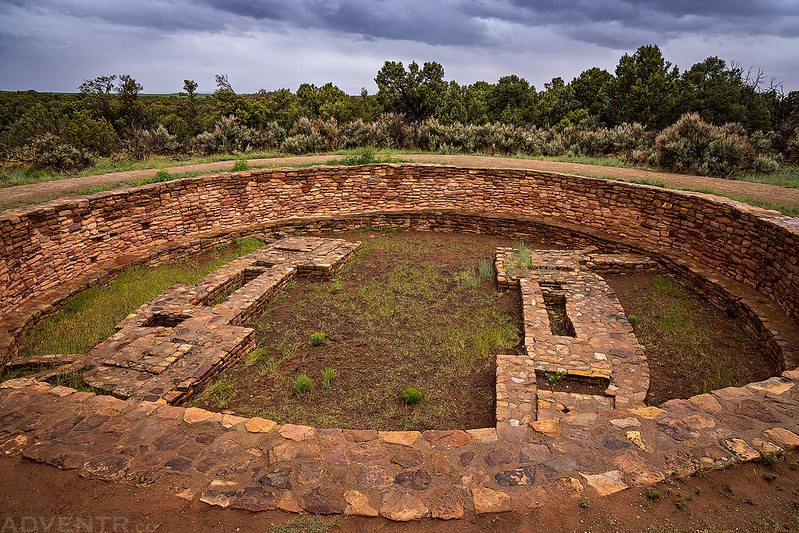 After our short foray into Canyons of the Ancients National Monument the rest of the drive home was pretty uneventful aside from some strong winds and on and off rain. I think Diane and I both had a great Spring Break this year and are already looking forward to her next break from school in August!