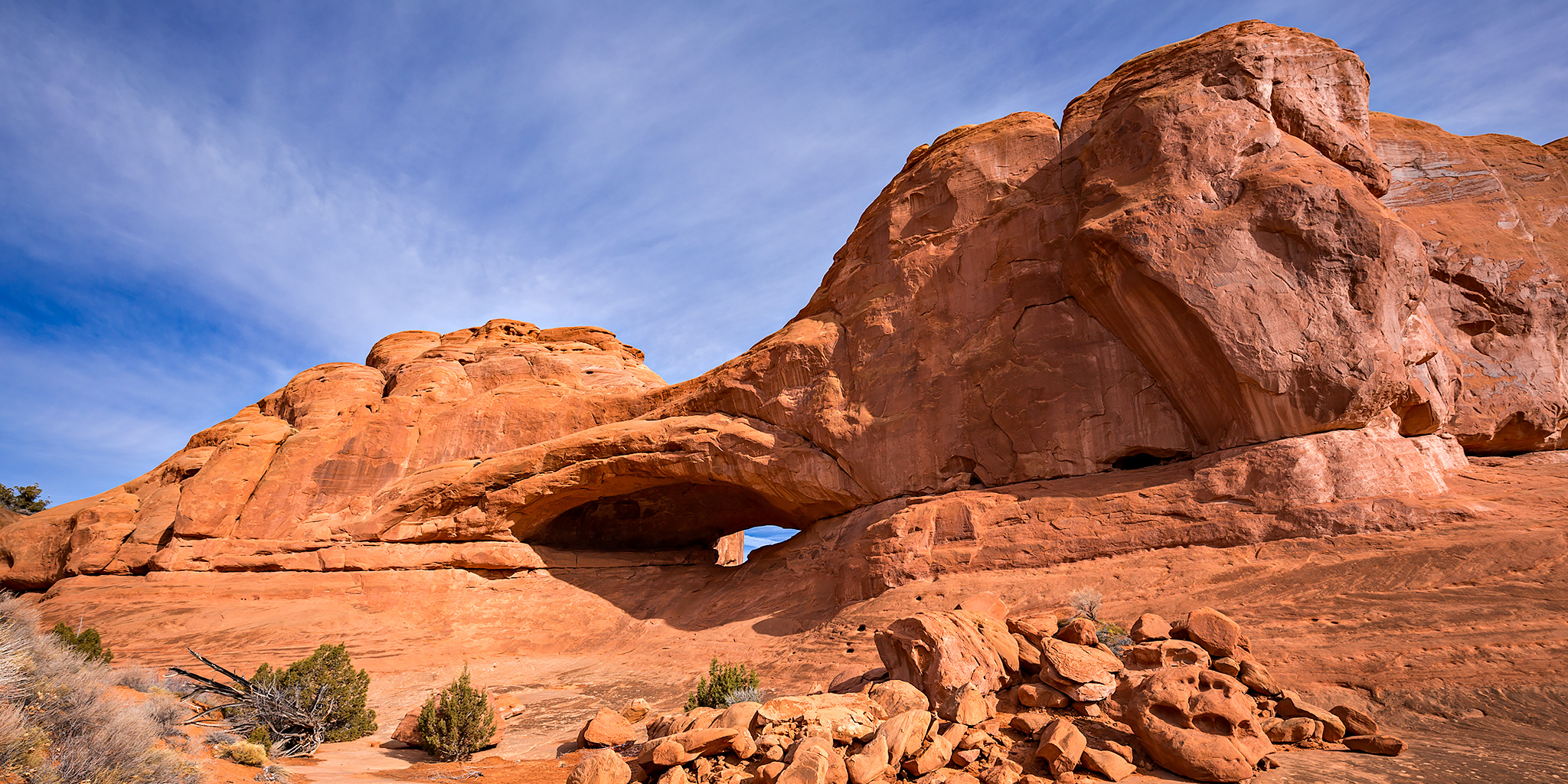 After spending all day Saturday on the Island In The Sky, I headed back to Moab for dinner and fuel before heading north out of town to the Willow Springs Road and finding a place to camp for the night. It would be a convenient location for me to camp this evening since I would be spending Sunday morning in nearby Arches National Park. I know it’s usually a popular and busy area to camp in, but I figured it wouldn’t be too bad this time of the year. As I was getting ready for bed, the wind all of a sudden picked up and a fast moving storm started quickly dumping a lot of graupel from the sky. The day had already been filled with a lot of interesting weather, so I guess this was just a good way to end it. The storm ended about as quickly as it started and soon I was seeing stars in the sky again. I slept very well this evening even though the temperature really dropped from the previous night and dipped down into the low 20’s.

Exploring the sandstone of Herdina Park at sunrise. 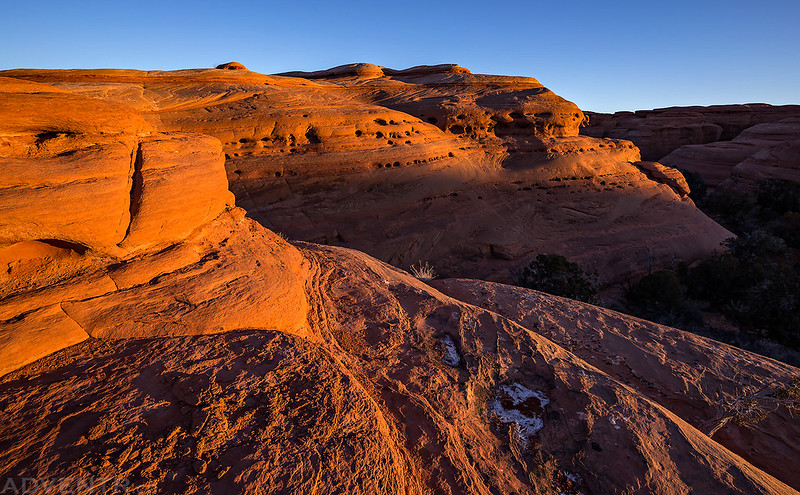 Back on our annual Christmas trip to Arches in December, Diane and I had planned to explore Herdina Park after our morning hike to Landscape Arch, but unfortunately all of the snow on the ground prevented us from doing much else that day. Today I hoped to finally explore more of Herdina Park on my own. I woke up about an hour before sunrise to finish the short drive into Arches National Park and then parked near a sandy wash just south of Herdina Park where I started hiking north. Thankfully, because of all the rain the previous day and freezing temperatures overnight, the sand in the wash was frozen solid which made for very easy hiking. I wasn’t even leaving any footprints behind!

I reached the entrance of a canyon at the southern edge of Herdina Park just as the sun was coming up for the day, so I climbed up onto the nearby sandstone fins and took a few photos. 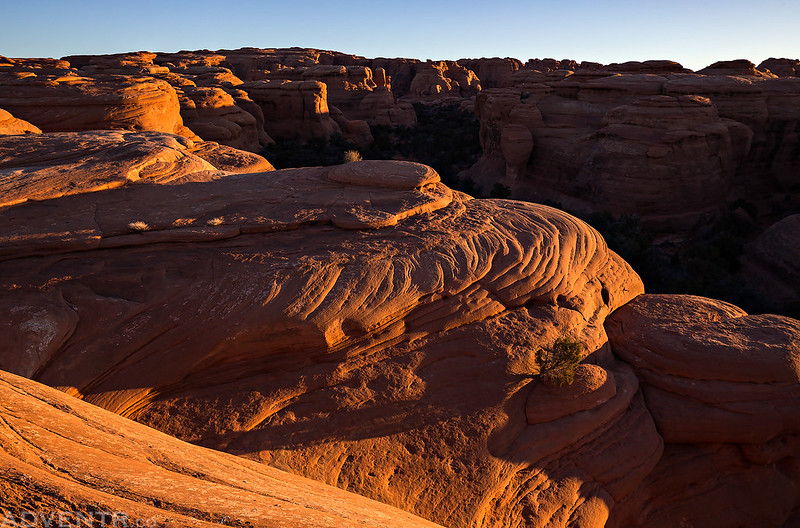 Looking south toward the mouth of Sevenmile Canyon from the edge of Herdina Park. 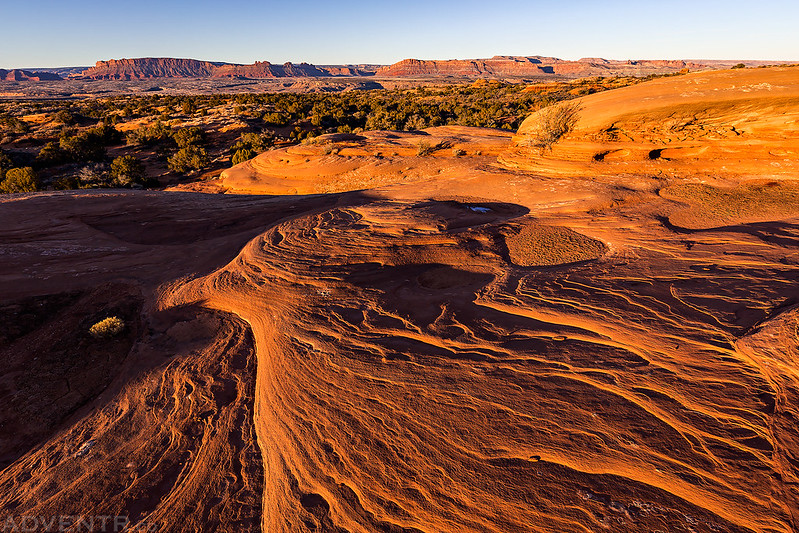 When the sun had risen higher in the sky, I continued hiking up the unnamed canyon and would spend the rest of the morning exploring a maze of canyons and sandy washes that cut into the sandstone of Herdina Park. I had hoped to reach the other side of Leaping Arch on this trip, but there was water and ice that prevented me from going everywhere I wanted to this time. I guess that means I’m going to have to return again in the future! I still managed to visit a couple other smaller natural bridges and arches in the area. After a cold start to the morning (which caused me to tear a hole in my down jacket while bushwhacking through a narrow canyon) the temperature did rise into the lower 40’s by the time I was headed back to my Jeep. 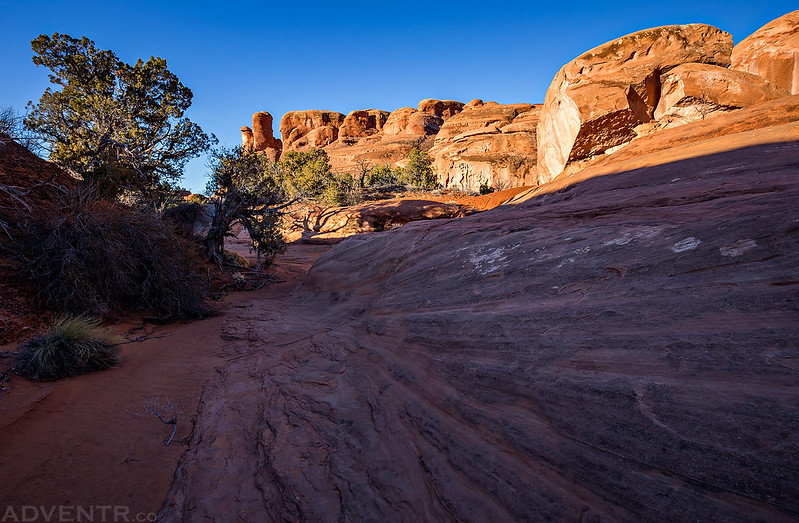 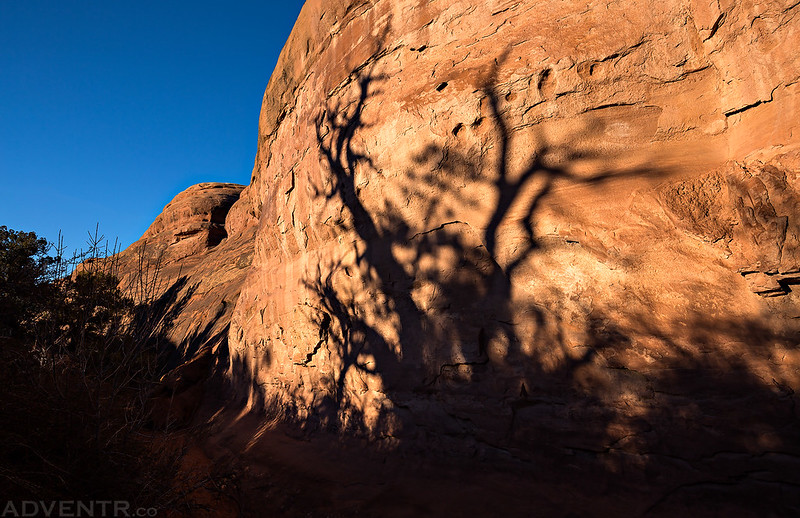 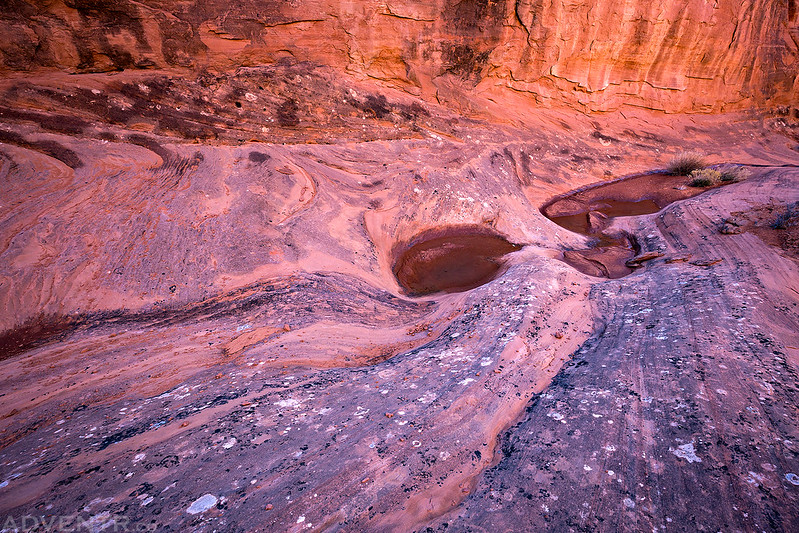 …and sandy washes though a maze of canyons. 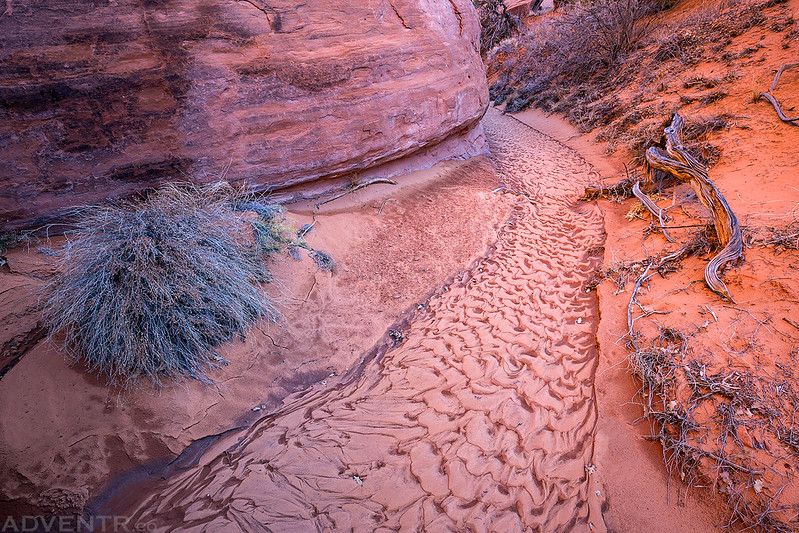 Some of the smaller side canyons dead-ended in narrow slots. 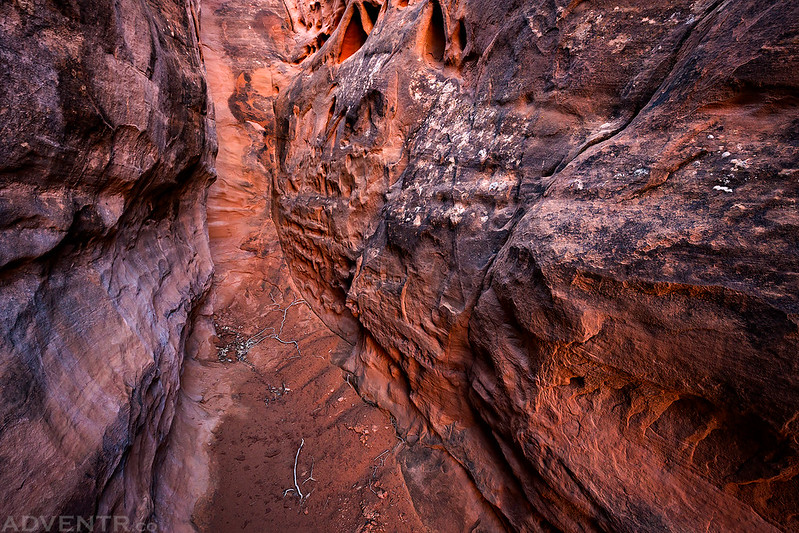 Eventually, I found my way over to the familiar Eye Of The Whale Arch. 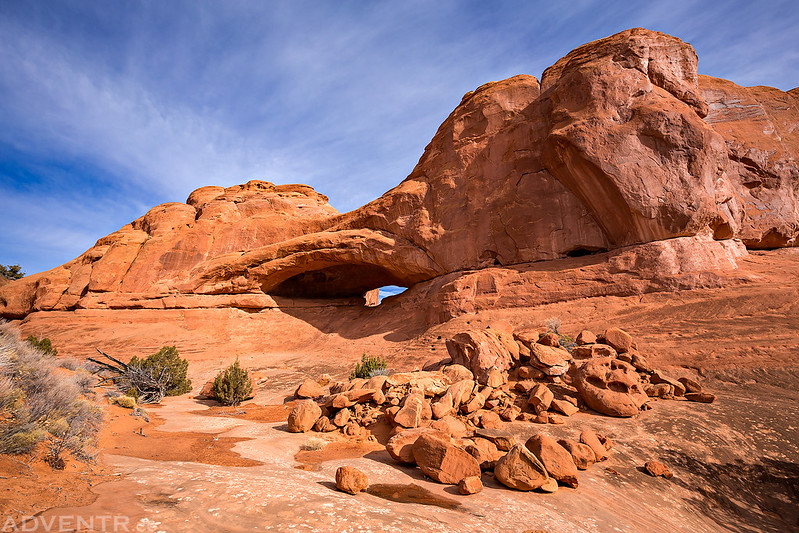 I came across an old dam built in one of the washes. 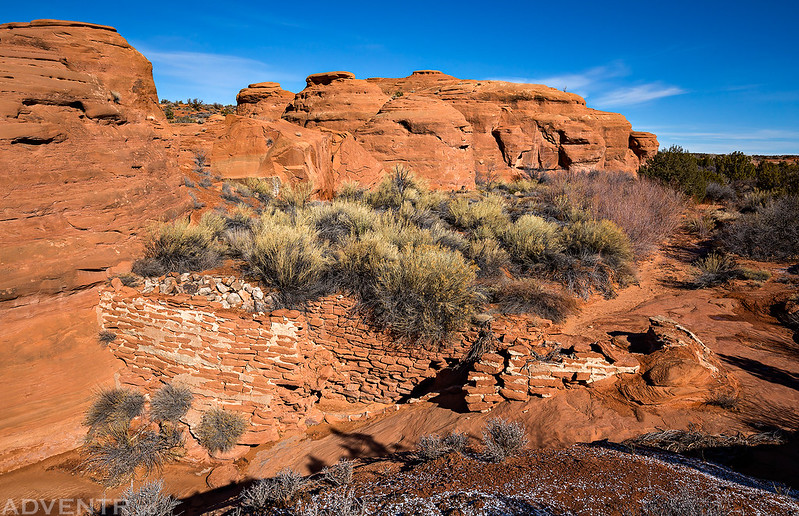 Not too far away from the old dam was the aptly named Dam Arch. 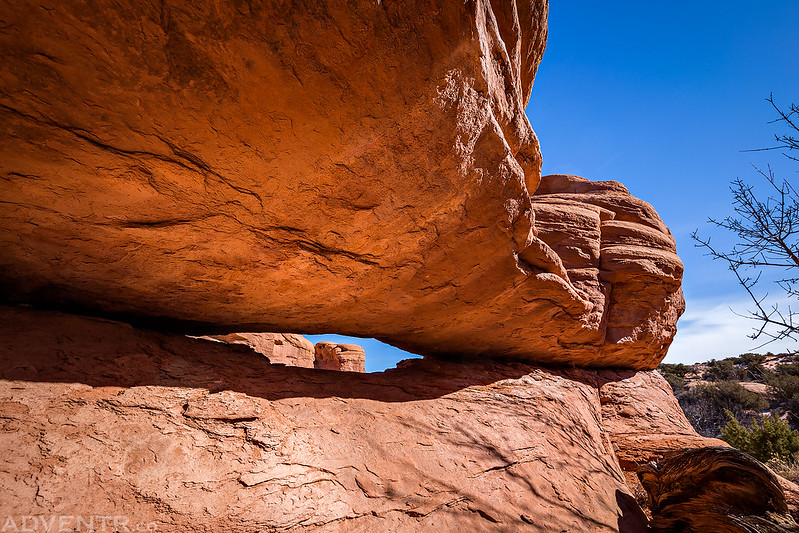 My final destination of the day was at a very cool natural bridge hidden down in a short and narrow canyon, known as Concealed Bridge. 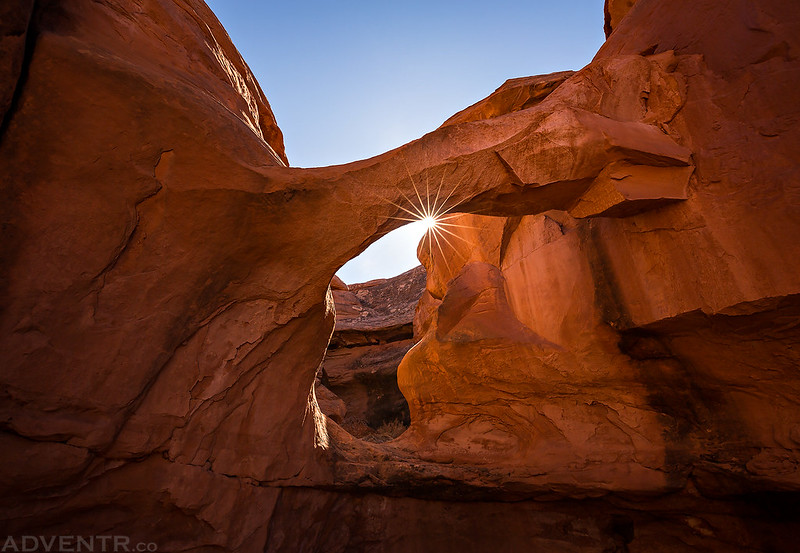 A view from underneath the natural bridge. 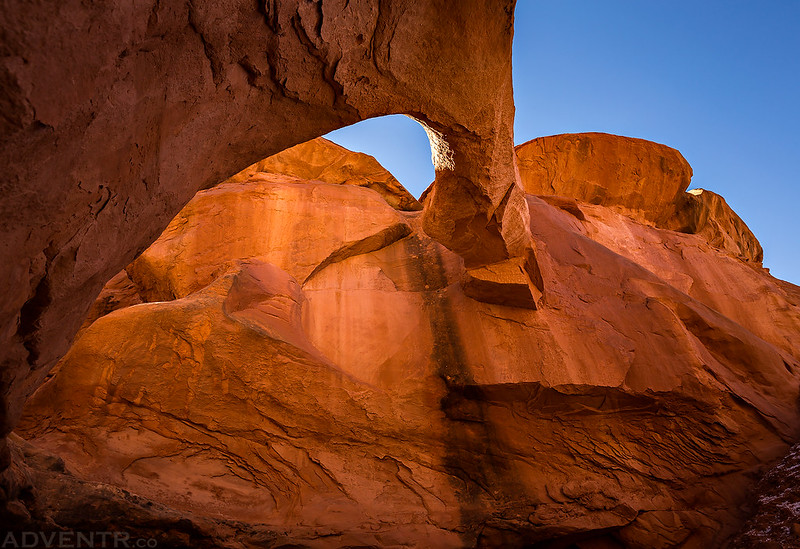 After leaving the natural bridge behind, I continued down the wash back to Willow Springs Road and hiked back to my Jeep. This had been my first visit to Arches National Park this year, and as usual, I didn’t see another person, which is just the way I like it! I decided to drive back out via Willow Springs Road so I could stop by the dinosaur tracks and then head back home. It had been a very nice weekend in two of my favorite National Parks.