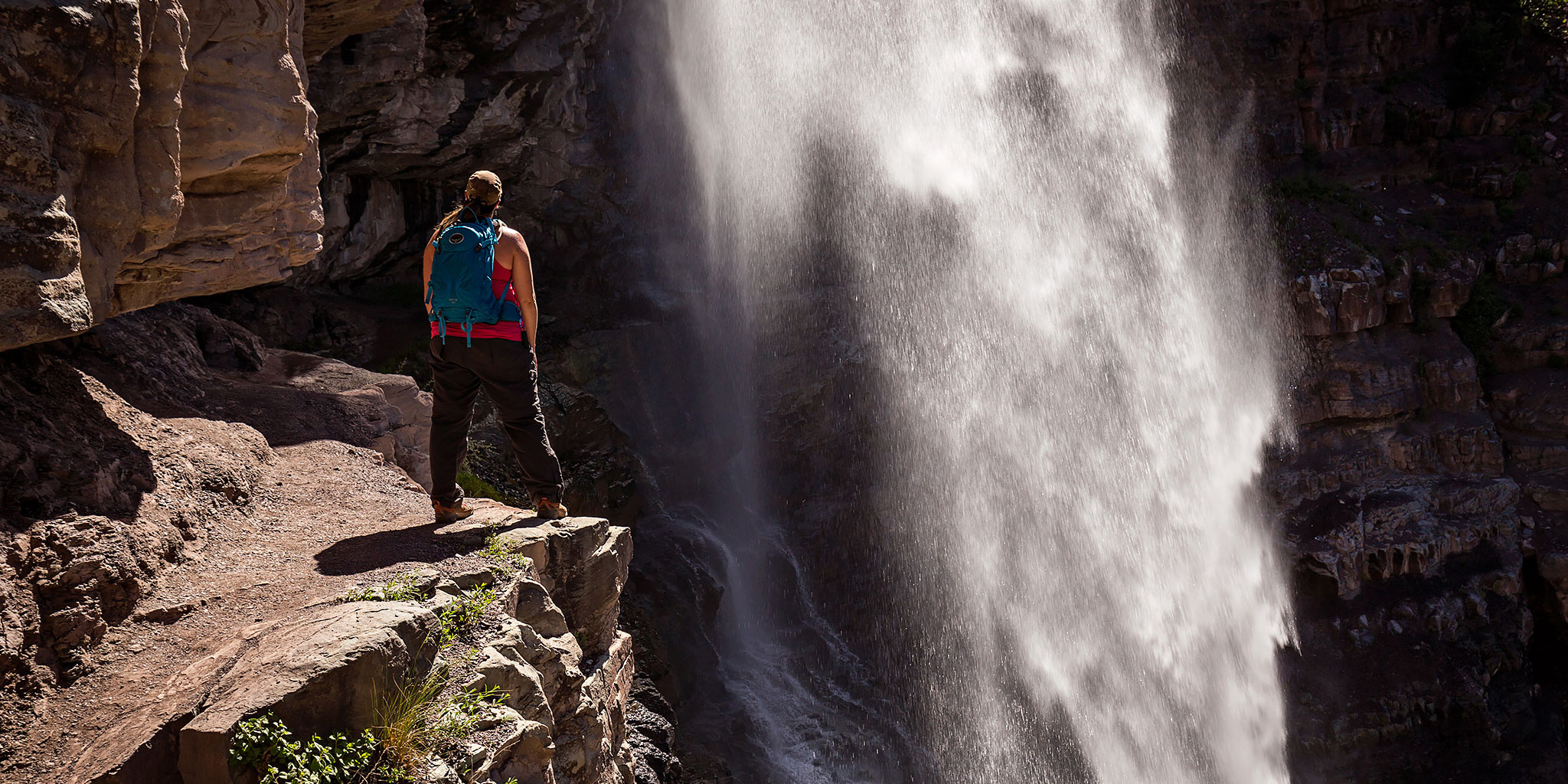 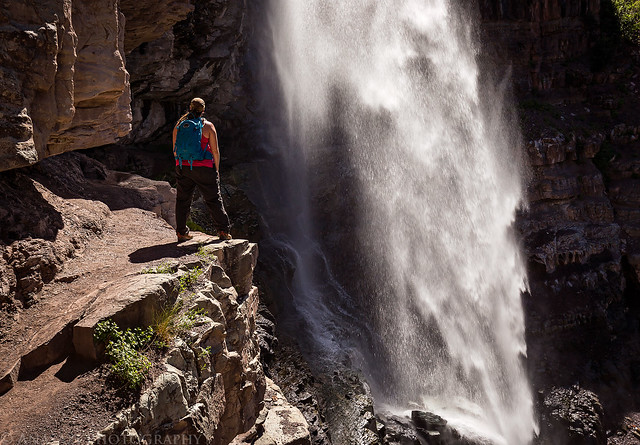 Diane stands on the edge next to Lower Cascade Falls along the Ouray Perimeter Trail.

Since this loop trail connects up with a few other local trails, there are many different options for starting and ending points (Cascade Falls, Baby Bathtubs, Ouray Ice Park, Box Canyon- to name a few). We decided to start and end our hike at the Visitor’s Center near the Hot Springs. We arrived at the trailhead mid-morning and started hiking shortly after 9:30am after driving down from Grand Junction.

One of the many signs marking the Ouray Perimeter Trail. 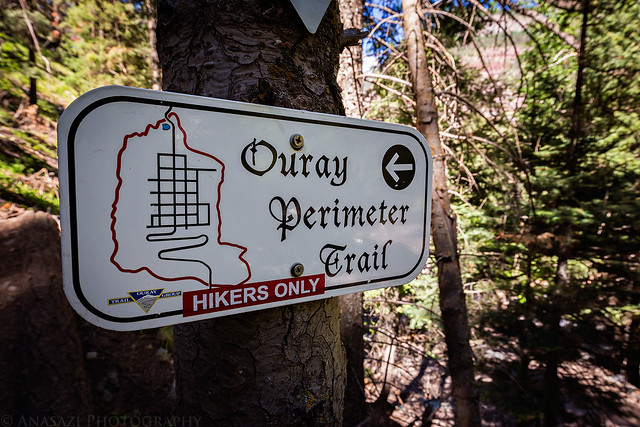 The trail starts out climbing above the Hot Springs to the base of the cliff across the highway from the Visitor’s Center. 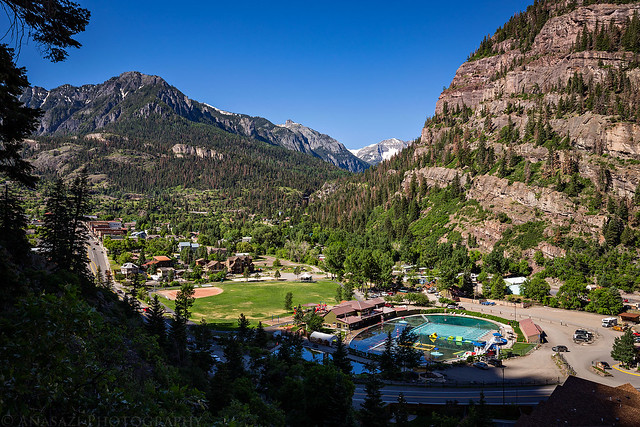 The views over Ouray start out quickly and continue throughout the entire trail. 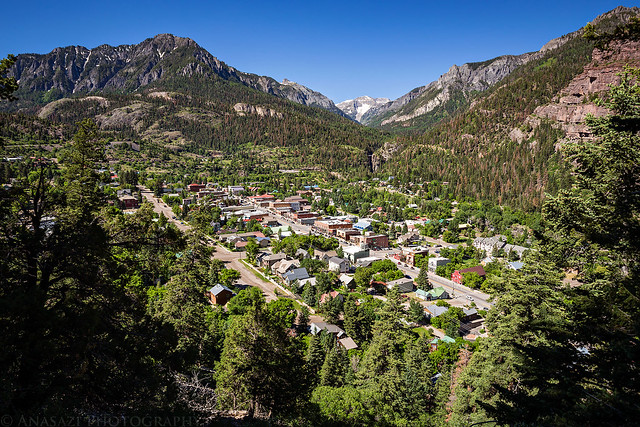 Lower Cascade Falls is the first popular spot along the trail. 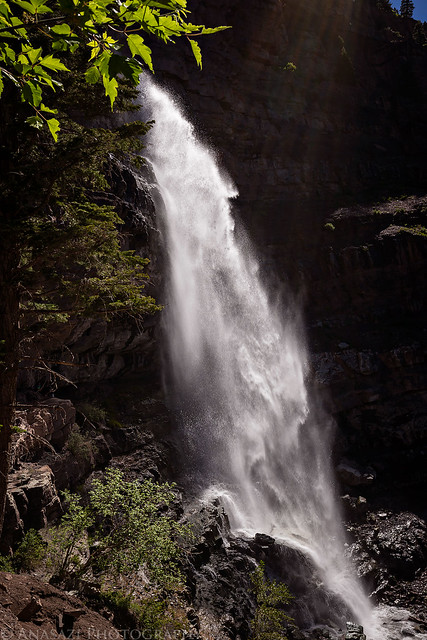 The waterfall was back-lit nicely when we arrived. 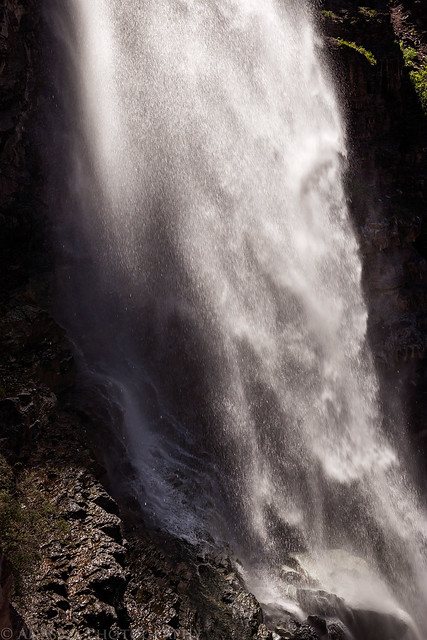 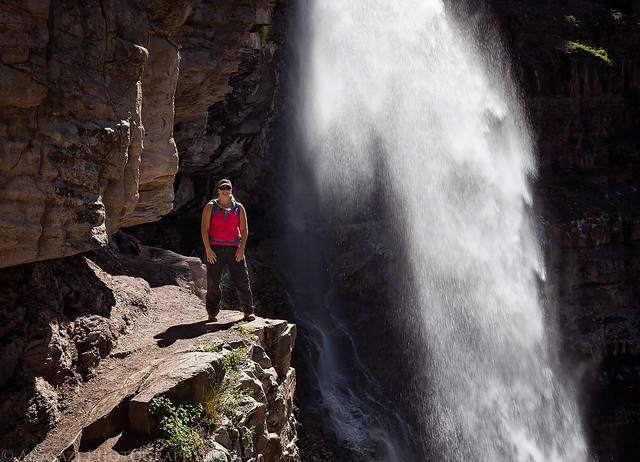 Diane hikes ahead through the green brush below The Amphitheater. 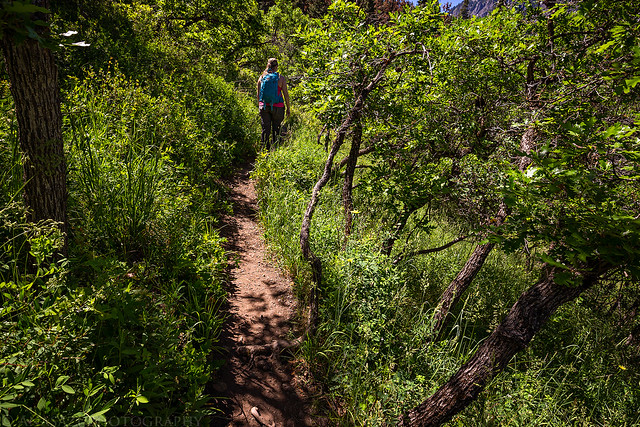 The trail follows the road to the Amphitheater Campground Road for a short distance where you get this view of the Million Dollar Highway climbing out of town. 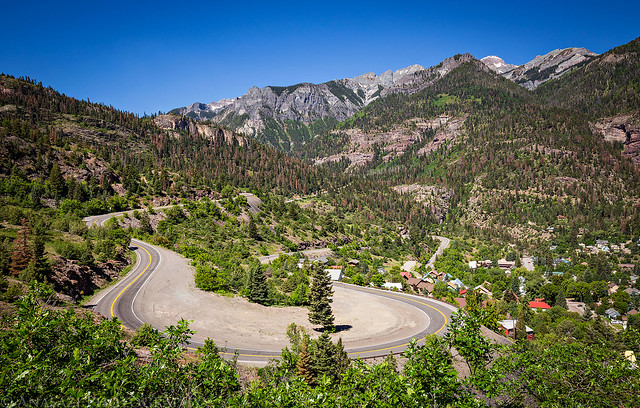 Before dropping down to cross the highway, there’s a nice view of Abrams Mountain. Plus, you can see the tunnel near Bear Creek if you look closely. 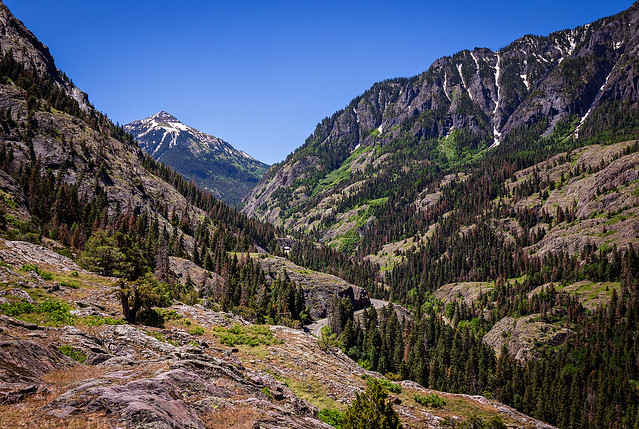 Crossing over the Uncompahgre River on the Ice Park Trail. 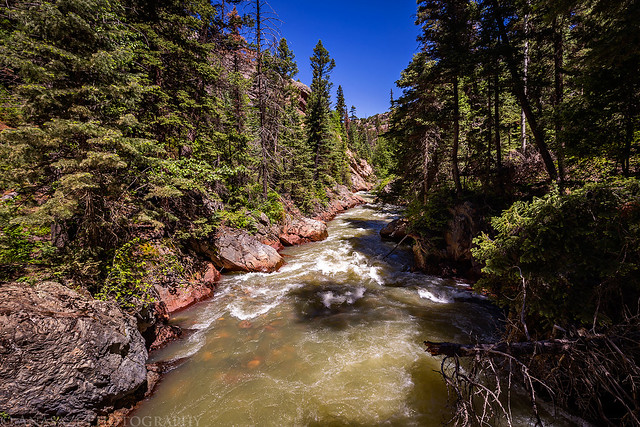 The Ice Park Trail follows this large pipe that supplies water to the ice park in the winter. There was water running through the pipe so it was nice and cool to the touch. 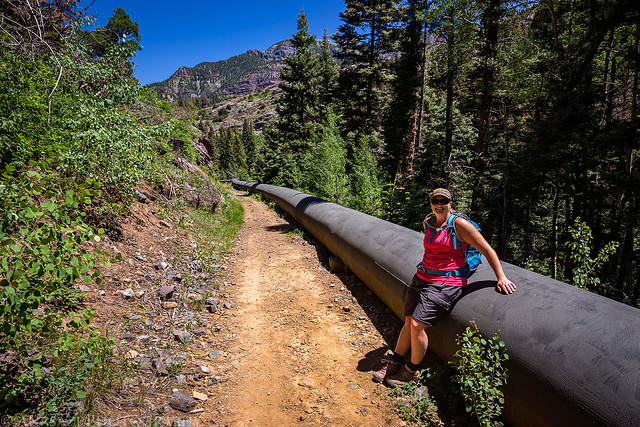 The view from the high bridge in Box Canyon Falls Park. 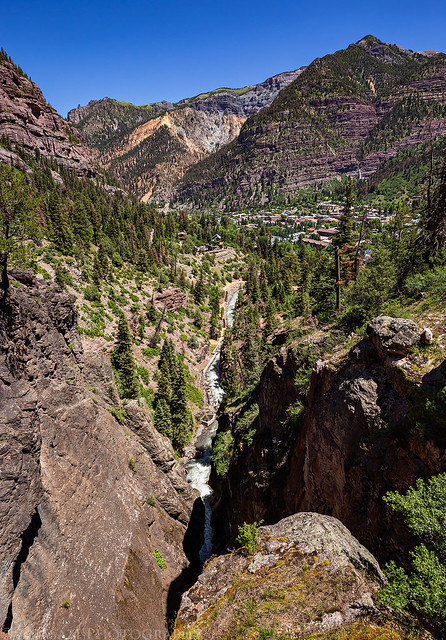 After crossing the bridge you immediately enter this tunnel that was used to bring water to Ouray at one time. 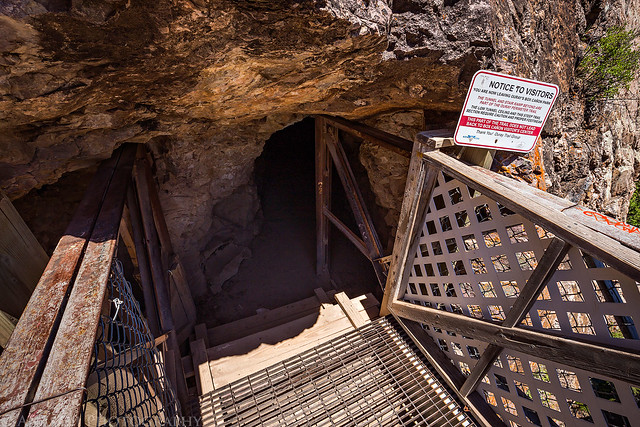 After exiting the tunnel the trail descends down a steep ledge. 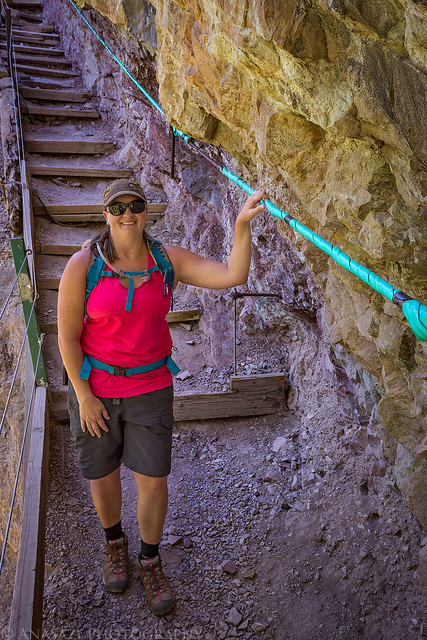 Following the newest section of the Perimeter Trail to the Oak Creek bridge. 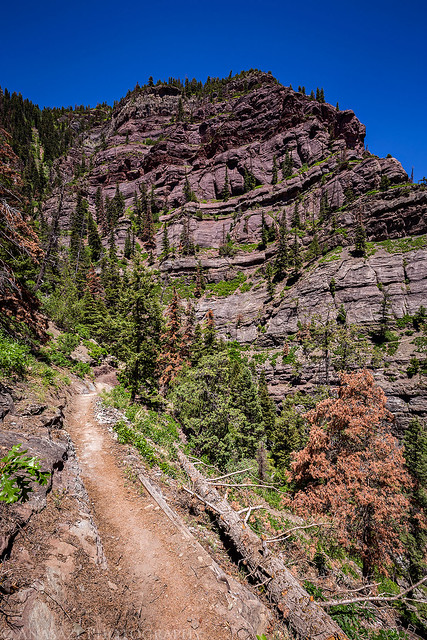 Rushing water in Oak Creek below. 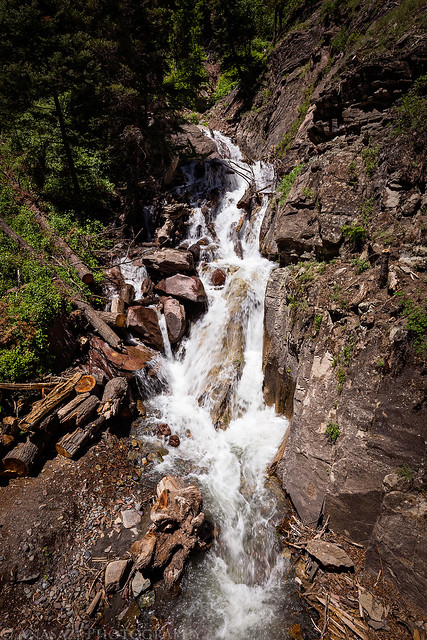 The new bridge across Oak Creek. 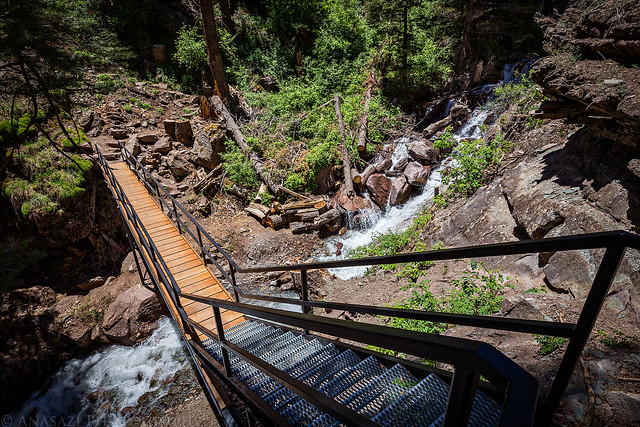 Since I haven’t found any information online with the latest updates to the Ouray Perimeter Trail, I am including the map below from my GPS track which is accurate as of June 2016. Enjoy!