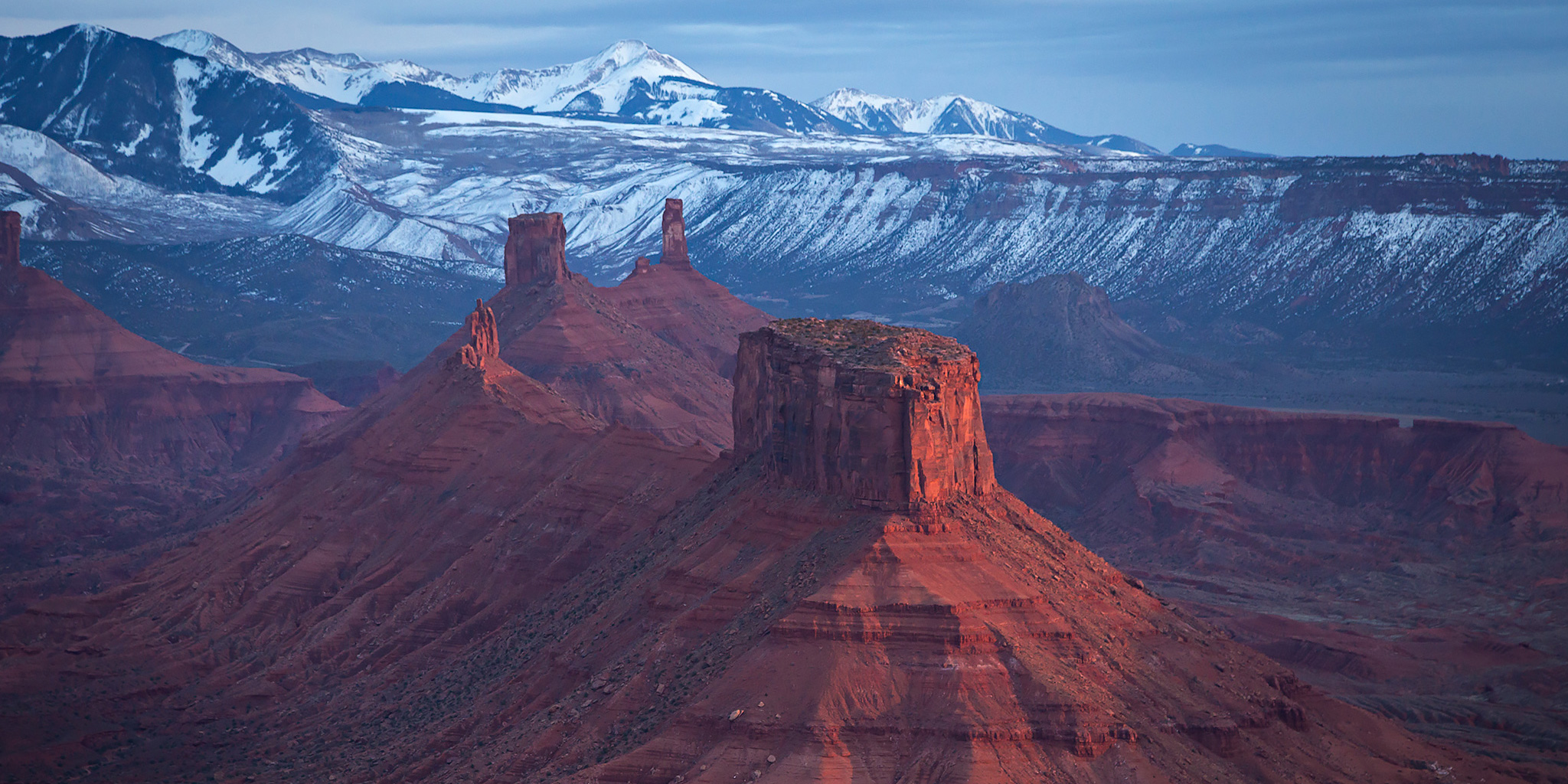 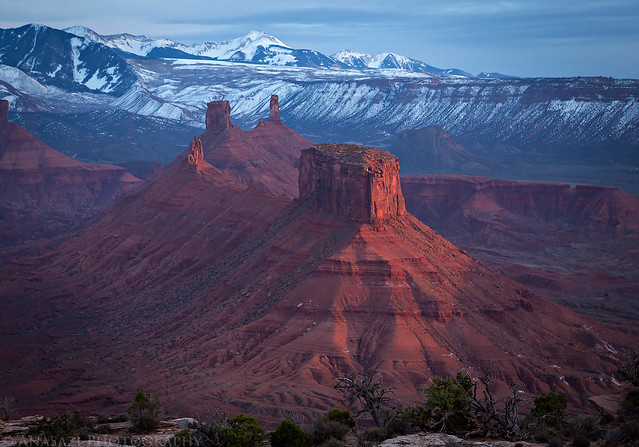 An amazing view from the edge of the Dome Plateau at sunset. 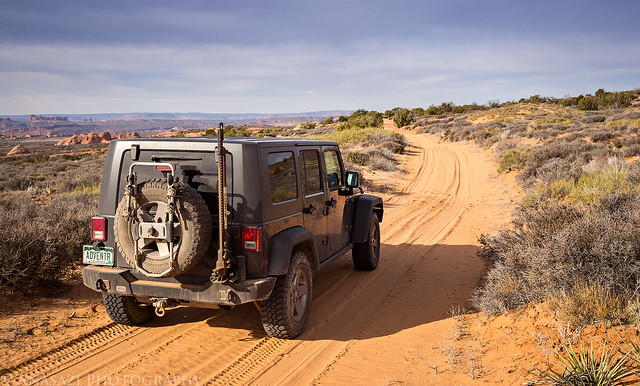 Overlooking the Sandstone Bowl of Salt Wash near my geocache. 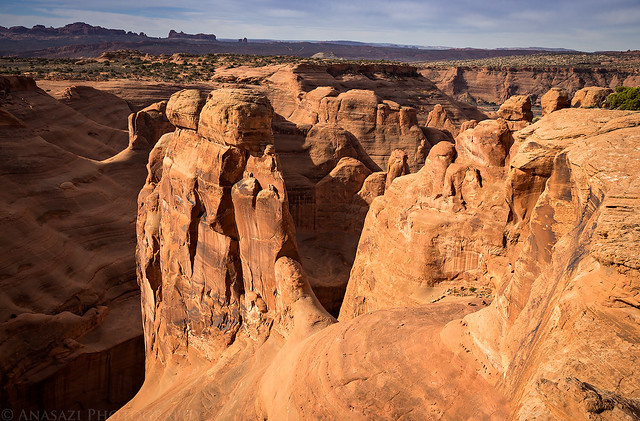 After leaving Winter Camp Ridge we drove over into the head of Lost Spring Canyon and hiked down the sandy wash until we reached it’s confluence with Salt Wash. This is a nice remote section of Arches National Park that is great to explore and stay away from the crowds.

The boundary to Arches National Park in Lost Spring Canyon. 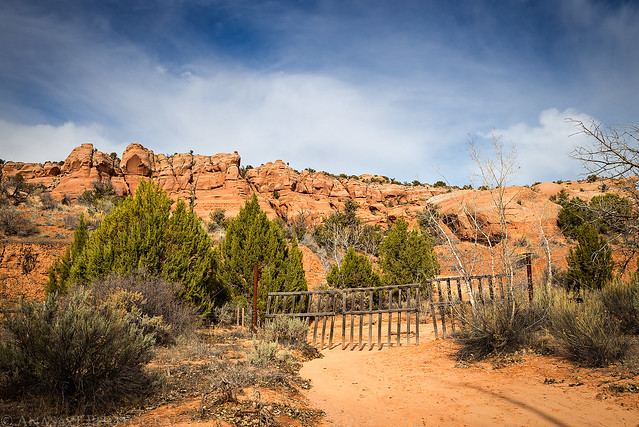 Diane hikes down the sandy wash ahead of me. 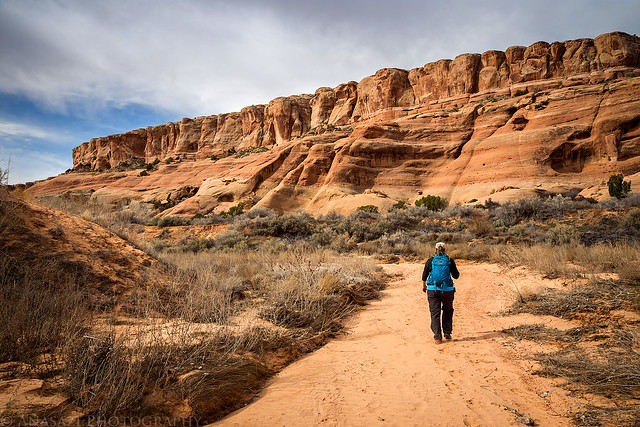 Beautiful sandstone walls surrounded us as we explored the mouth of the unnamed side canyon that contains Covert Arch. 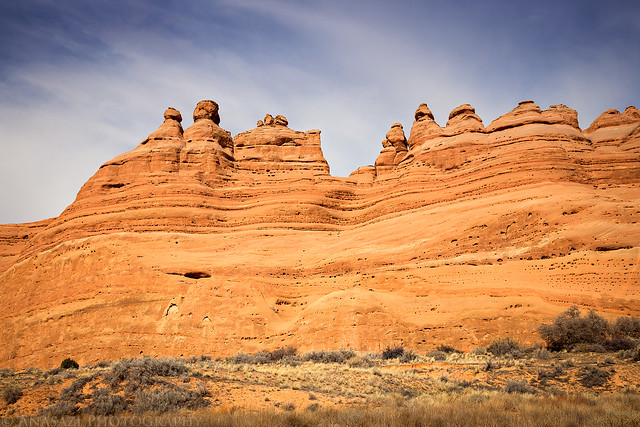 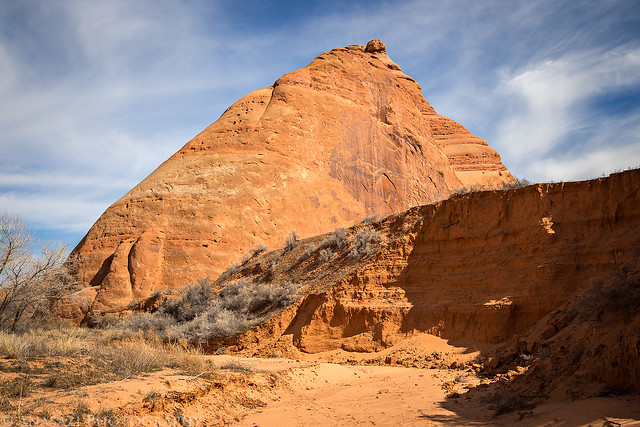 On our way back up the canyon we stopped at this large alcove that is home to Cavern Arch. The arch didn’t become visible until we got a little closer. 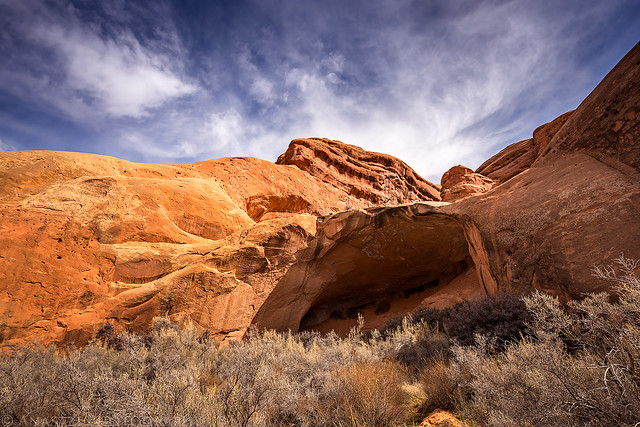 Looking out from the back of the alcove with Cavern Arch in the upper left. 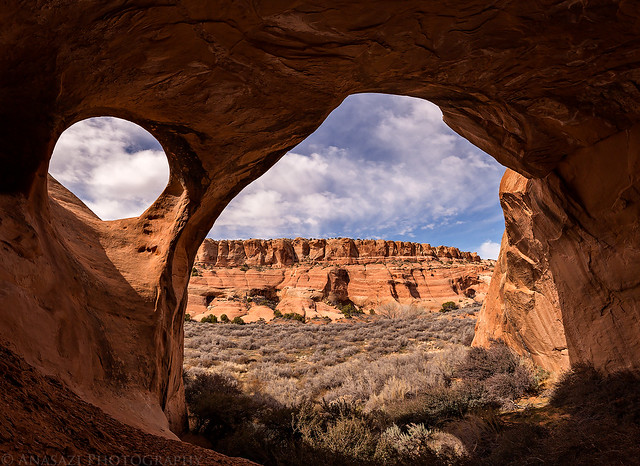 The sun peeks through Cavern Arch as we headed back to the Jeep. 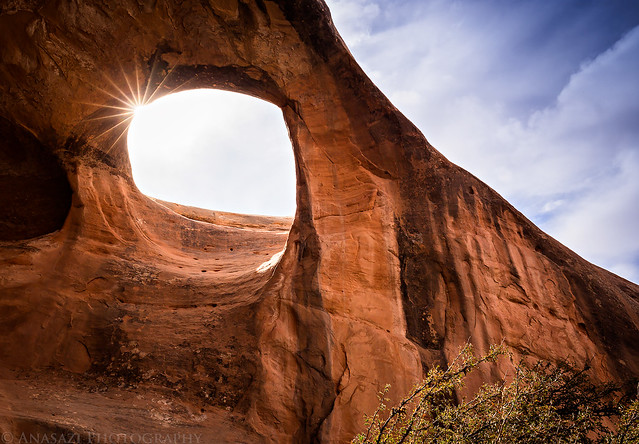 It was a pretty sandy hike in the wash. 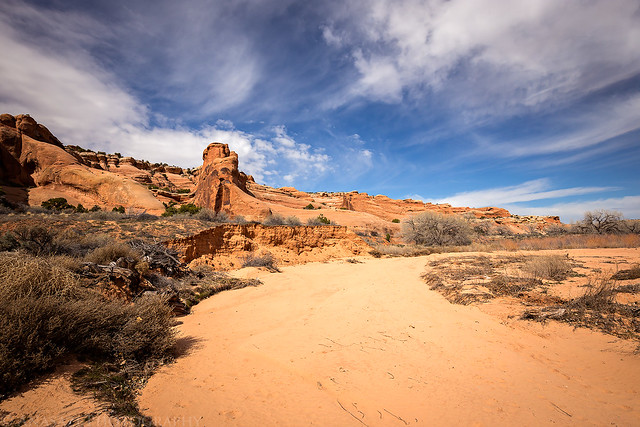 After leaving the Lost Spring Canyon Wilderness Study Area behind, we followed some rough roads that are part of the Dome Plateau Jeep Trail until we reached the edge of Cache Valley. We were in search of Cache Arch, a little-known arch that sits above the valley and actually isn’t too far away from the much more popular Delicate Arch. While this arch now sits outside the park, it was originally included within Arches National Monument until the boundaries changed when it became a park in the 1970’s.

The end of the Dome Plateau Trail above Cache Valley. 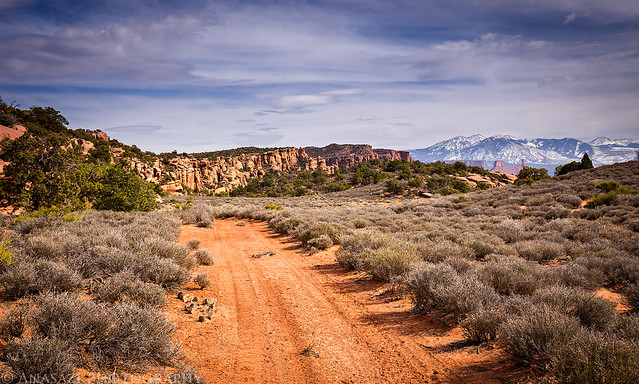 Our first view from above as we climbed down to Cache Arch. 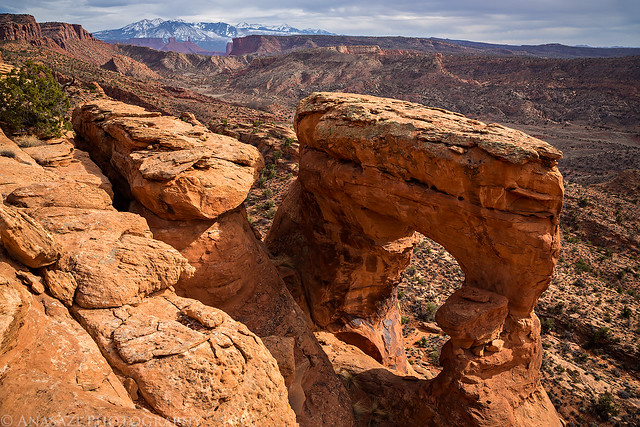 This arch was tough to photograph while we were there since the sun was right behind it in the sky and there was little room on the ledge to maneuver. 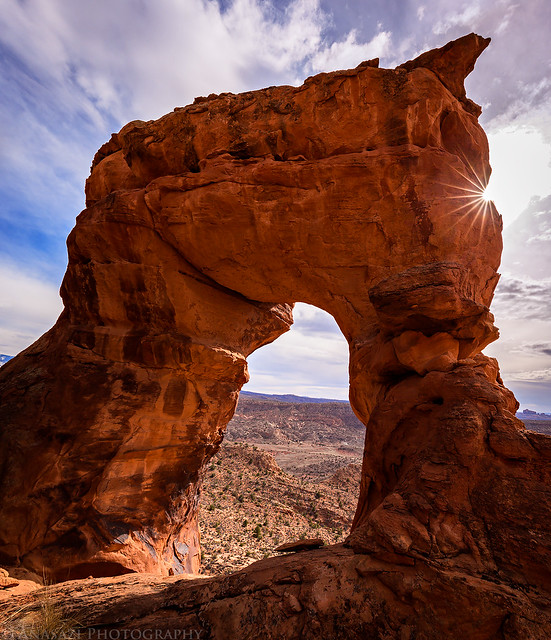 Here’s a side view of the arch with Diane sitting nearby so you can get a better idea of it’s setting and scale. 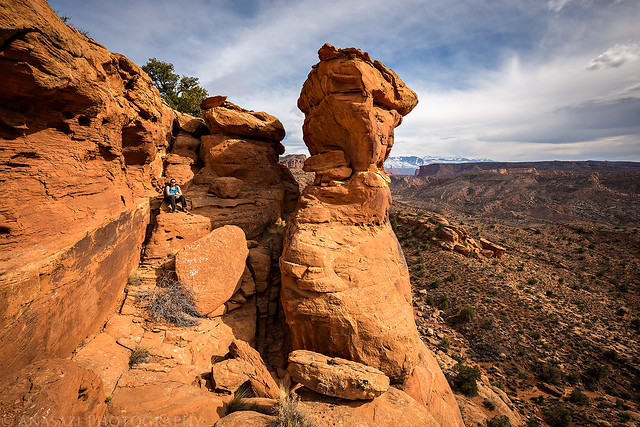 Another look at Cache Arch before we climbed back up to the rim. 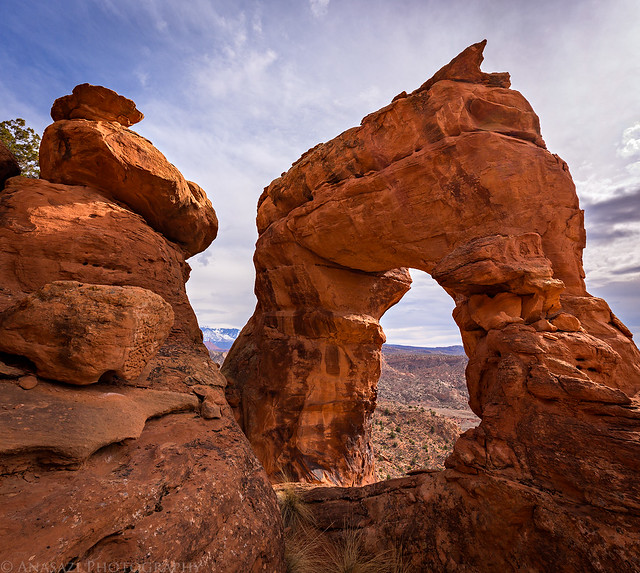 There were great views over Cache Valley towards Castleton Tower and the La Sal Mountains from this area. 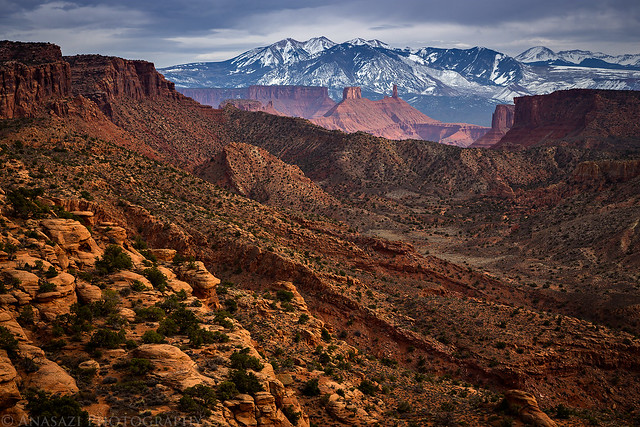 After visiting Cache Arch we drove around to the eastern edge of Dome Plateau and hiked to the rim overlooking the Colorado River, Professor Valley and Castle Valley. The views from this area were amazing! I was hoping for a good sunset but the clouds were a little too thick this evening with the incoming storm arriving earlier than predicted. There were still a few brief moments of light that got through. 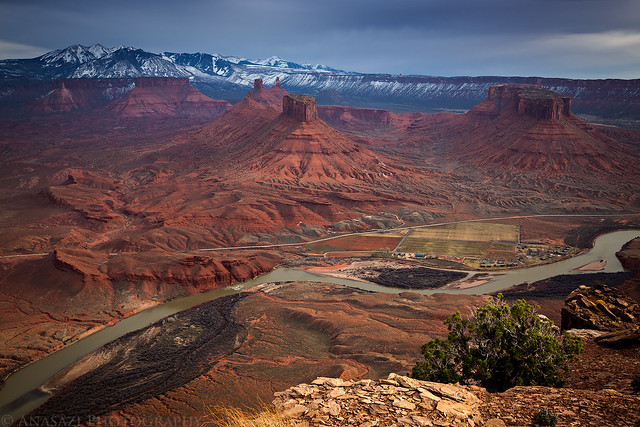 Rain in the distance and sunlight breaking through the clouds made for a colorful scene to the west. 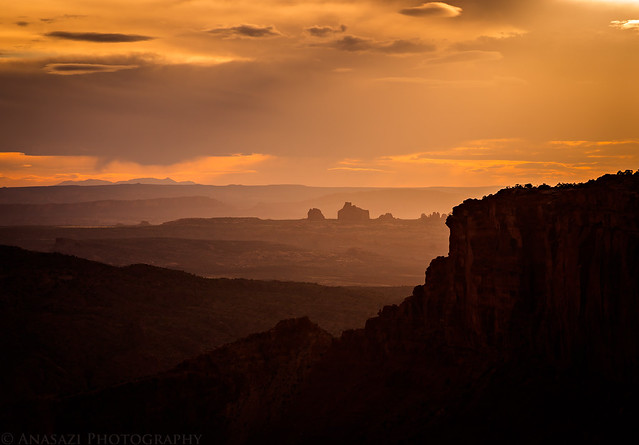 This is the view I came up here for… 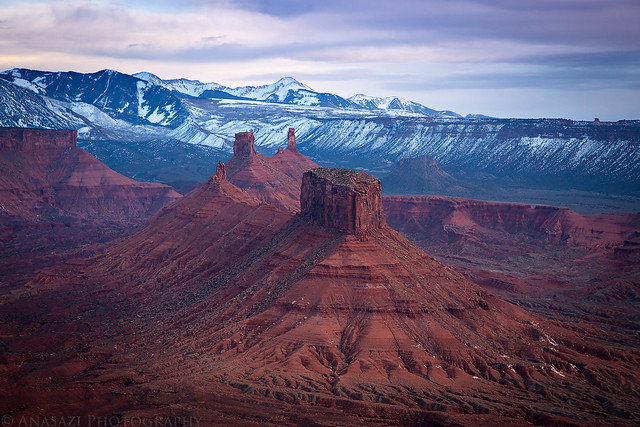 While I was exploring this area I had a scary experience that could have easily turned deadly. I was hiking towards the edge of the cliff and there was what looked like a shallow wash or depression to cross to the to the other side. I started hiking across and all of a sudden my right leg fell through the ground to my knee and was dangling in the air. I could tell that something wasn’t right as the ground below me was very soft and squishy. As I got my right leg out of the hole my left foot started sinking in. Luckily, I was able to get out and climb back up onto the nearby rock.

I walked along the edge and found that there was a huge deep crack in the ground that wasn’t really noticeable where I had tried to cross. The sand and dirt had covered the crack and formed a thin layer over the opening. It was a desert crevasse! Instead of ice and snow like a typical crevasse found in a glacier, this one was composed of sandstone and sand and dirt. I couldn’t see the bottom, but it was at least 100-150 feet deep. I’m really lucky that the entire section didn’t just fall through when I stepped on it!

This is a photo of the holes left by my feet. 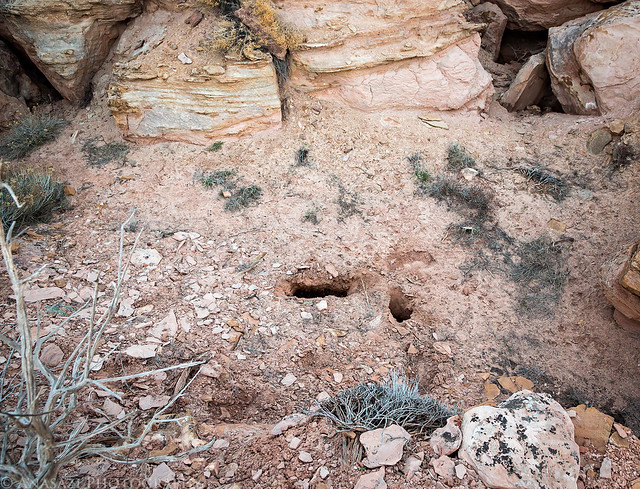 This is where I was first able to see what I almost fell into. 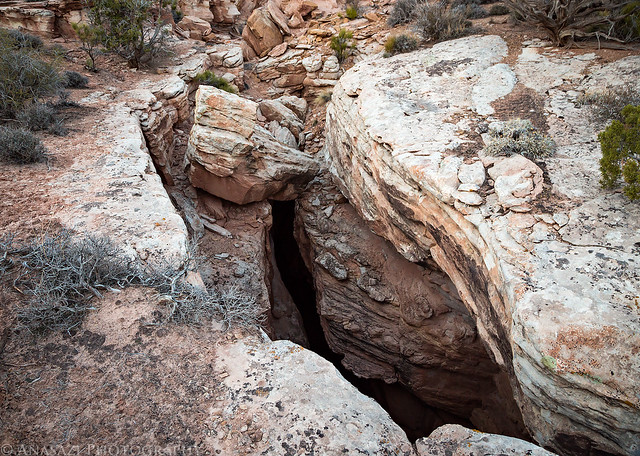 For a brief moment the sun did manage to break through the clouds and light up the monoliths above Castle Valley before we started our drive back home to end the day.