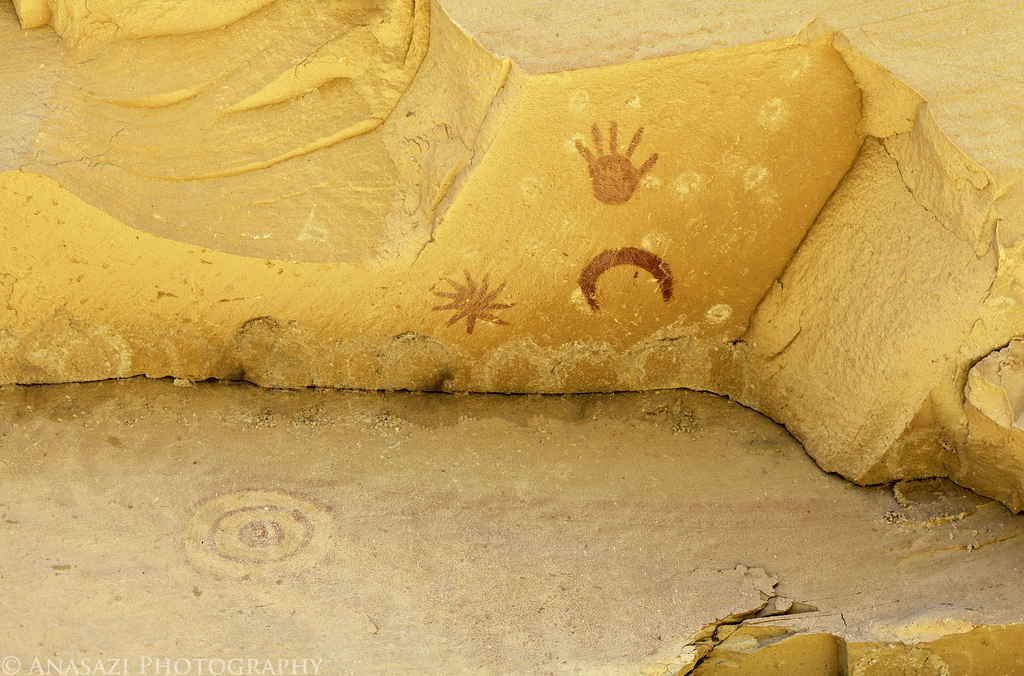 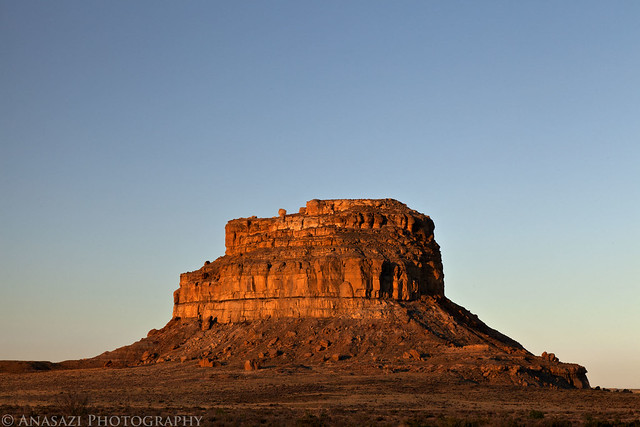 Once the sun was up, I made my way back to camp and found that Amanda was awake and ready to go. We had a little breakfast and then went into the park just after they opened the gates. We wanted to get an early start since we were going to hike the longest backcountry trail in the park to Penasco Blanco and we wanted to do it before it got really hot out. Along the way we took the Petroglyph Loop trail and searched the sandstone walls for petroglyphs. We ended up finding quite a few.

A well defined sheep petroglyph overlooks some faded designs that are rather unique. I see the heads of two sheep below the designs facing each other, too. 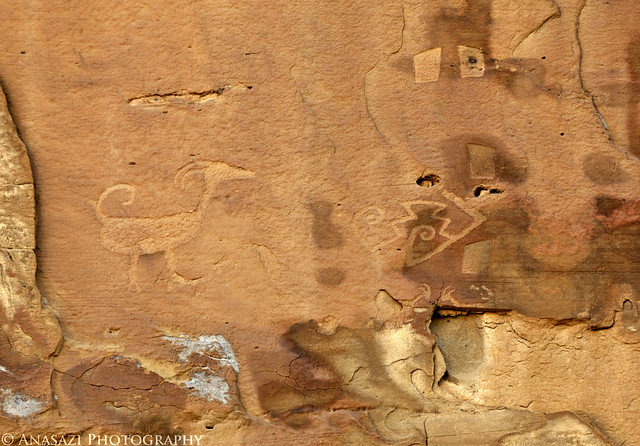 A bighorn sheep petroglyph with some more recent scratchings. Above the sheep is a faint pictograph that might represent a rain cloud? 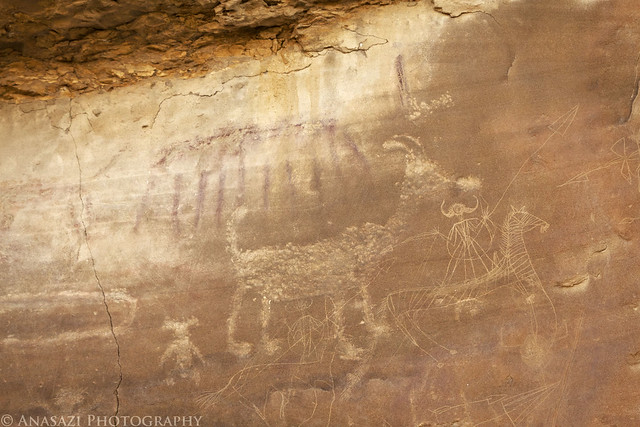 A spiral with a head…plus some more recent scratchings. 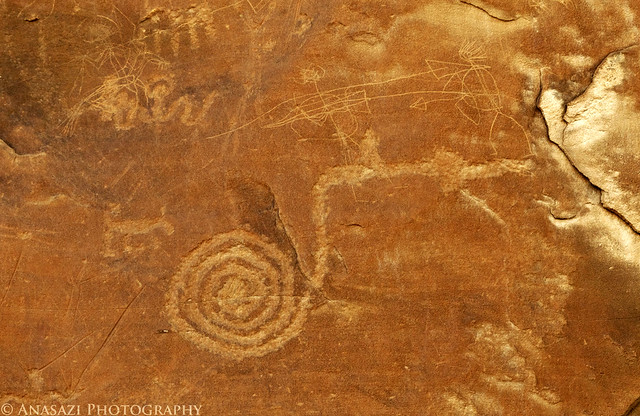 This one was located high above and hidden. I would have missed it if Amanda hadn’t spotted it. 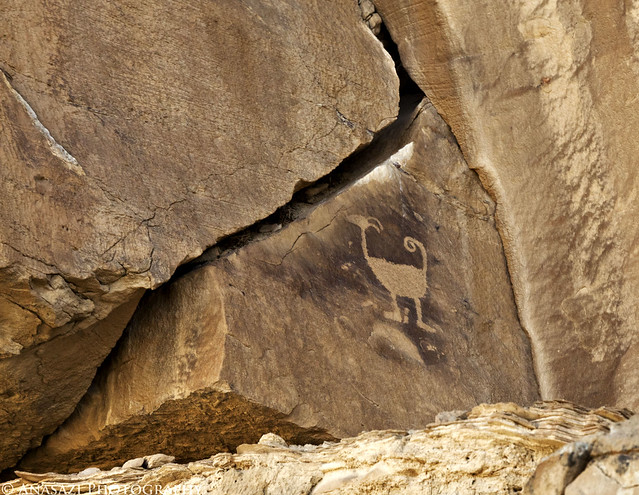 My favorite petroglyphs along the loop which were located high above us. 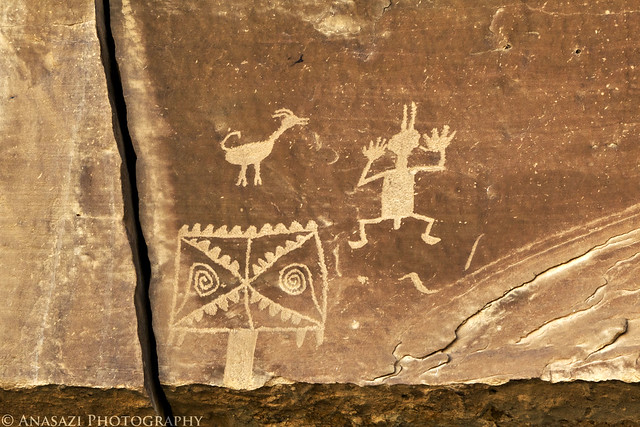 The last panel along the loop trail. 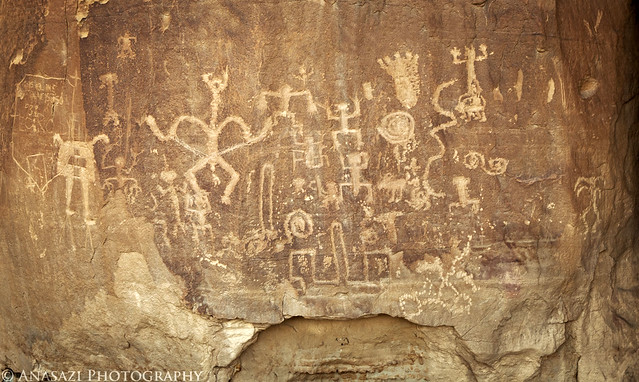 After finishing the loop, we continued on and eventually crossed Chaco Wash. Once on the other side we reached my main destination for hiking this trail: The Supernova Pictograph.

Some believe that this pictograph in Chaco Canyon represents the supernova that created the Crab Nebula on July 4, 1054. 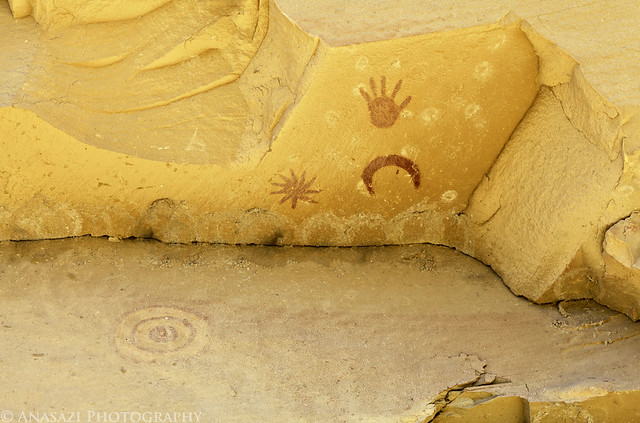 After passing the Supernova Pictographs there’s less than a mile to go until you will reach Penasco Blanco. Along the way we passed a large boulder that had this large shield-like petroglyphs on it. Maybe it is more recent as I’ve not seen anything like it before, but I don’t know? I do know I saw some similar claw-like hand petroglyphs near the campground, too… 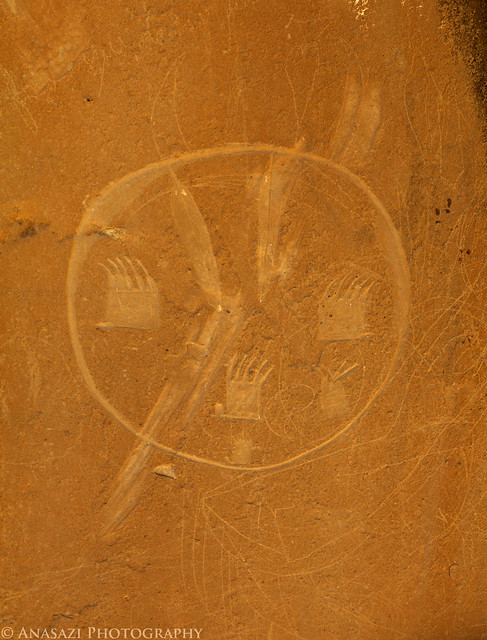 Finally we reached what’s left of Penasco Blanco. I don’t believe this site has been excavated. Amanda found some shade to sit and rest in, while I walked around the site and explored. There were actually a lot of potsherds here, which I had noticed were absent from the excavated sites that are easier for people to get to. 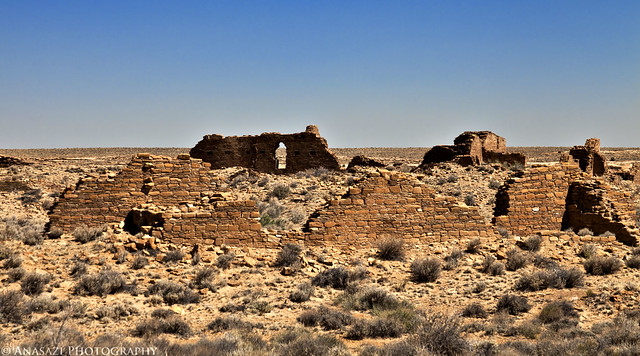 The hike back was a bit hotter, but we were pretty lucky and there was a nice breeze the whole time to help keep us cool. We even found a little shade on the way back and sat down for a while to relax and cool off.

Once we were back from the hike, we stopped by camp for some lunch and to relax until evening. When we were rested up I went back to the petroglyphs between Chetro Ketl and Pueblo Bonito for some photos. 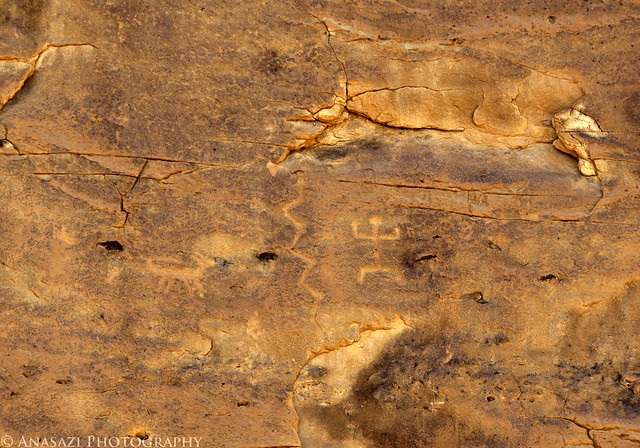 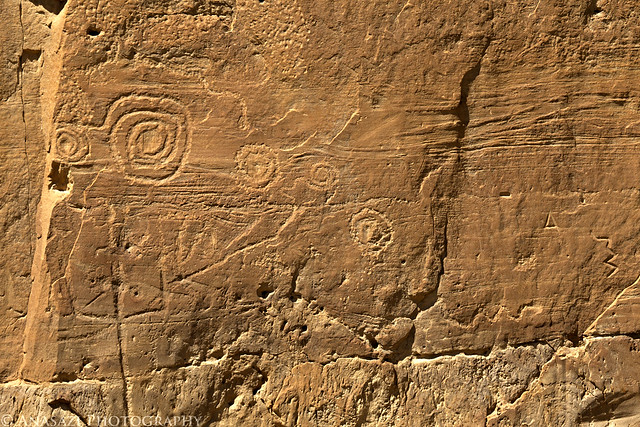 Even though it was mid-day and the light was pretty harsh, I just had to get a photo of Richard Wetherill’s grave while I was nearby. 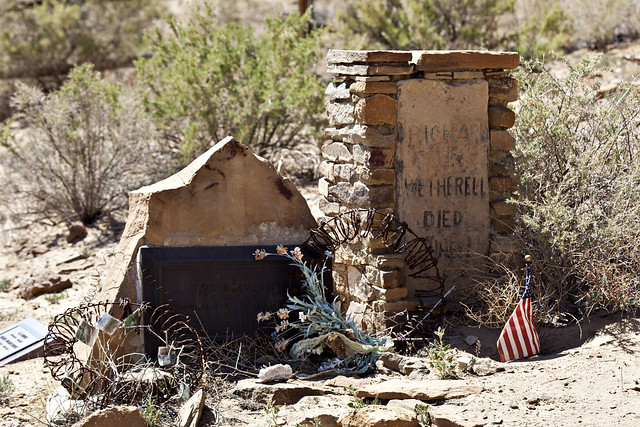 This panel was located high above Richard Wetherill’s grave. It’s hard to see, but there’s quite a few figures in this one with a large hand petroglyph and a number of figures holding hands. 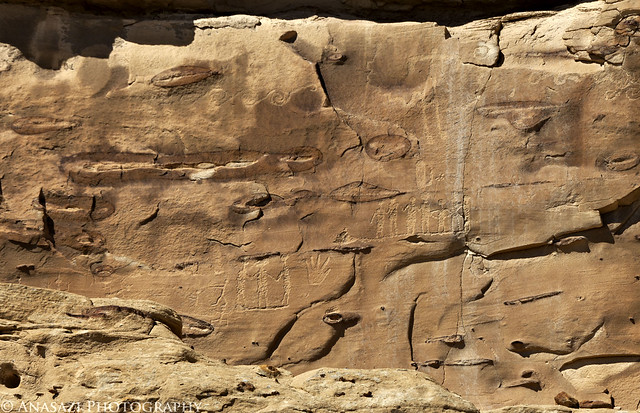 Next we explored Pueblo del Arroyo for a little while. 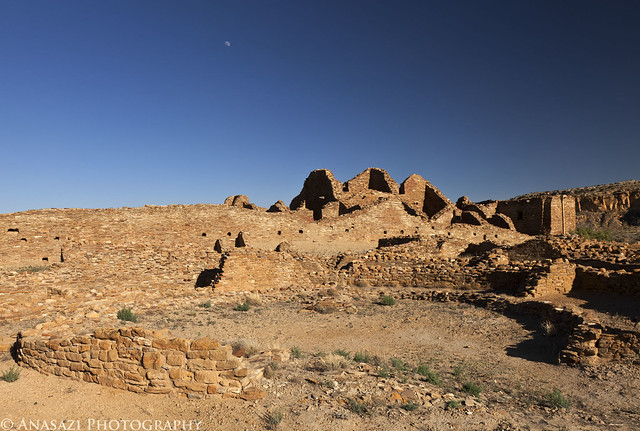 For sunset I decided to head up to the Pueblo Bonito Overlook. The trail leading up there was pretty cool, and there was a lot to see along the way. Next time I’m at Chaco, I will need to complete the loop to Pueblo Alto while I am up there. 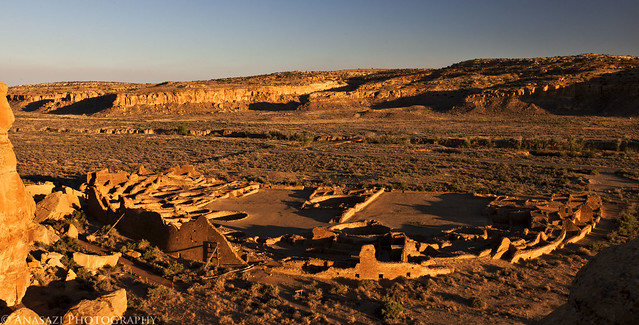 On my way down I stopped for a few last photos at Kin Kletso. 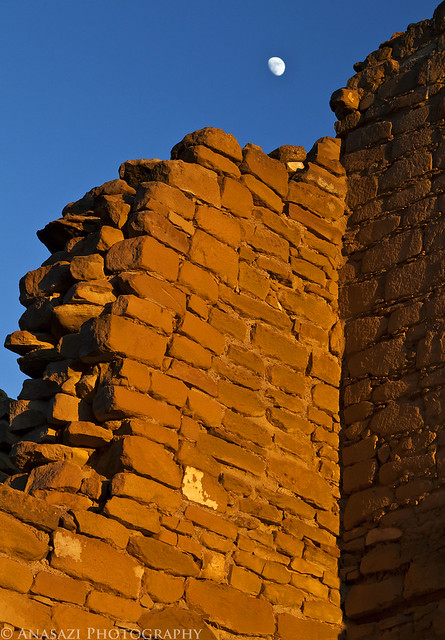 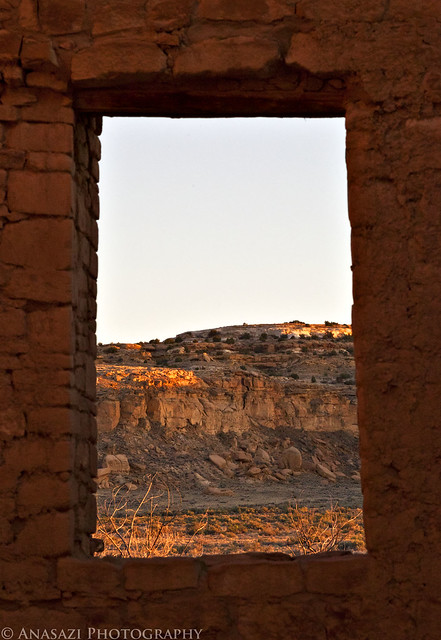 A sun circle caused by my polarizer. I like the colors in this shot. 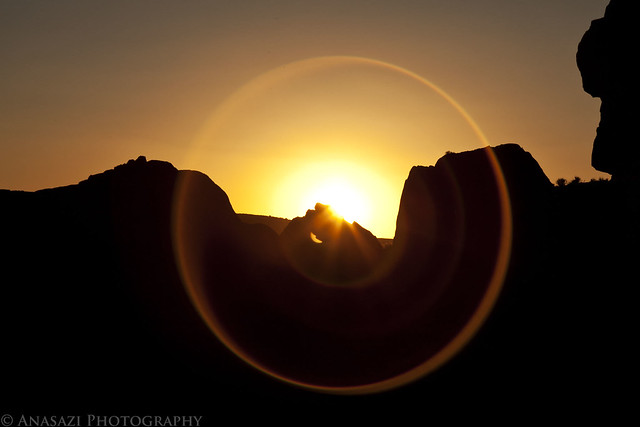 From there it was back to camp and right to bed. It was a long, but fun and interesting day!