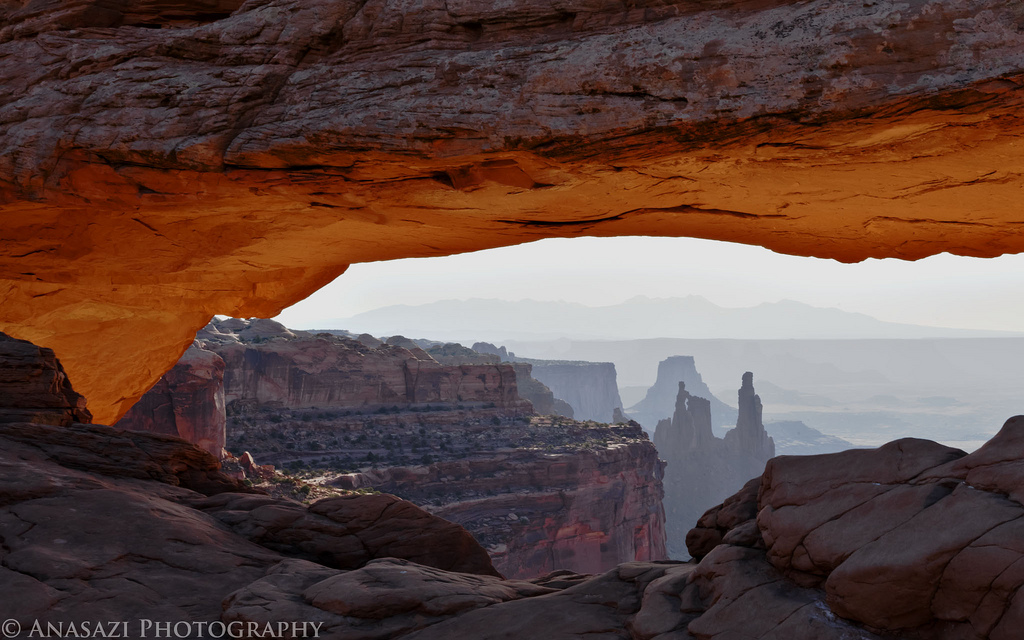 After work on Friday I stopped home to finish loading the Jeep and then made my way to Arches National Park. I would be spending the weekend with a group of photographers from the Rocky Mountain forum on the Nature Photographer’s Network. Bret Edge was nice enough to setup the Spring Fling event for the group in Moab.

After setting up camp just outside of Arches I headed into the park and over to the Windows Section. There were a lot of people wandering around over there, so I decided to keep going and stop at Double Arch, where there was almost no one. There were some clouds in the sky, so I was hoping that as the sun set they might get some color to add to the background behind the arch. That never happened, but just after the sun set, the sky cleared up and I took this photo of the arch in the twilight. 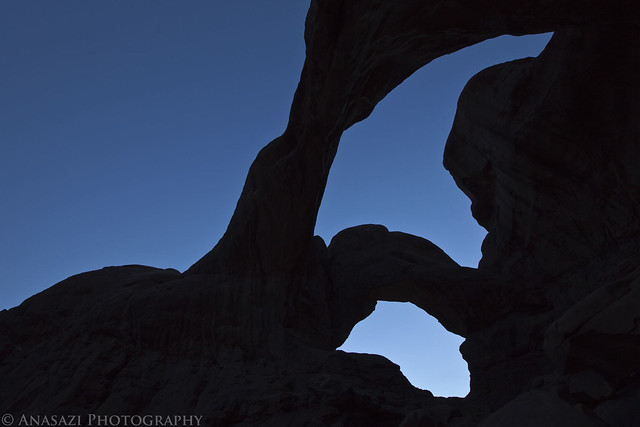 When I finished up at Double Arch, I went over to Balanced Rock to meet the rest of the group for a little night photography led by Scott Bacon. While standing around in the parking lot talking and waiting for it to get dark enough out, some more clouds rolled in and it appeared that we wouldn’t be taking any night shots after all. Half of the group decided to leave since the conditions weren’t looking good, but those of us who stayed got lucky and the clouds did end up clearing. I took a few photos of Balanced Rock, but unfortunately I wasn’t getting the focus right. So instead I turned my camera to the right and illuminated the sidewalk with my headlamp. The lights from Moab highlighted the horizon behind the butte in the distance. 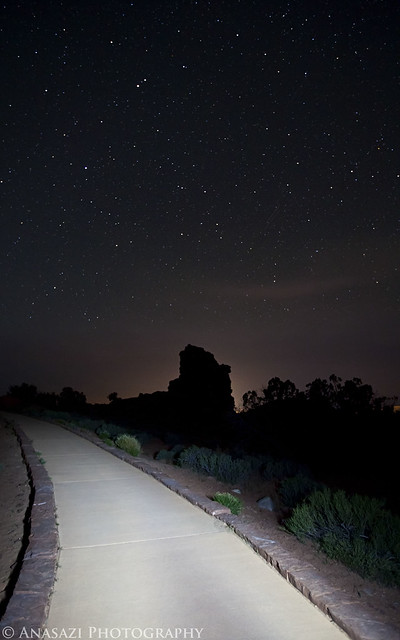 If I remember correctly, I think I made it back to camp around midnight. I quickly went to bed, but didn’t sleep very well that night. My alarm went off at 4:30am so I could meet up with the group at Dead Horse Point State Park to photograph the sunrise. 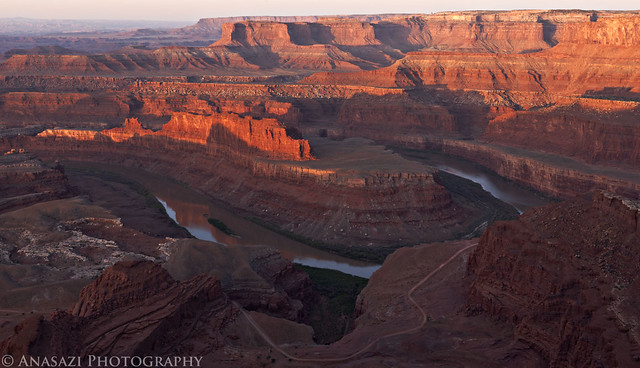 Once the sun had come up, a few of us headed over to Mesa Arch in Canyonlands National Park to catch the last of the good light. 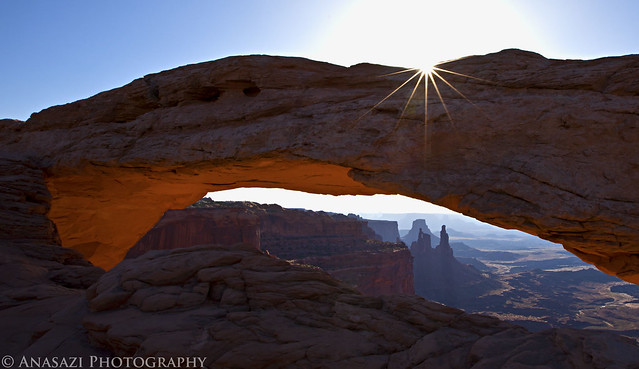 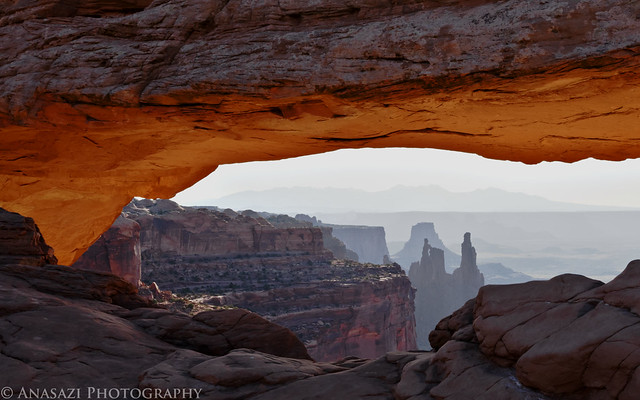 After the light at Mesa Arch was gone, I had a little free time before we would be meeting up at the Moab Library for a little workshop, so I stopped to revisit a few rock art panels. 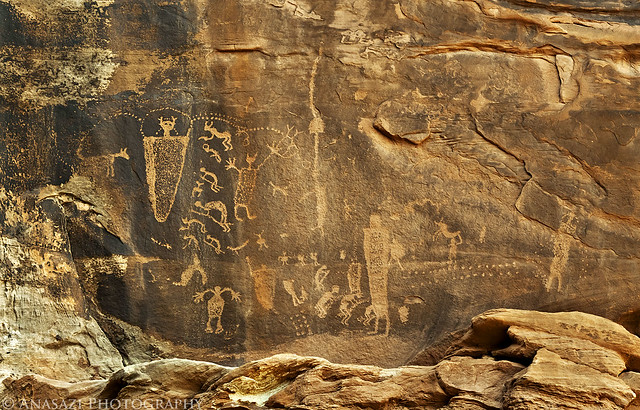 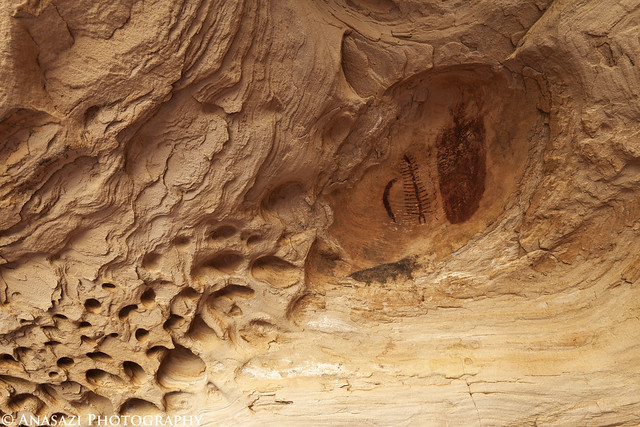 After our little workshop we headed over to the park and hung out for a while until it started getting closer to sunset. That’s when we headed back over to Arches and hiked out past the Marching Men and then to Tower Arch. I didn’t get any photos here that I am happy with, so I have nothing to post, but once the sun was down I made my way to the Moab Maiden so that I could take a photo of it with some star trails. Here’s my attempt, which I think turned out pretty well (especially the lighting on the petroglyph and boulder), but I think I can do better. I just need to head back any try it again when I have a chance. 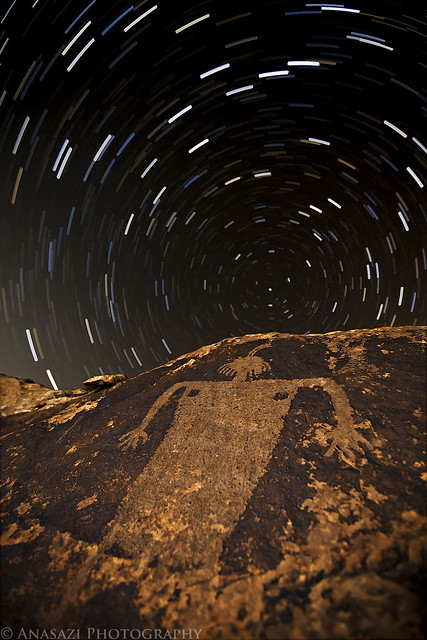 Then it was back to camp again for the night. It was a very long day for me on less than four hours of sleep the night before. I ended up sleeping in on Sunday instead of trying to catch the sunrise again, but before heading home I went searching for some new rock art. I looked for three different panels, but only managed to find one of them… 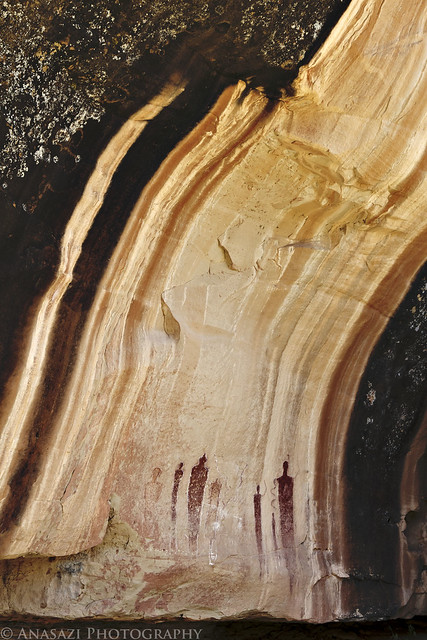 I had a great weekend, met some cool new people and learned a lot from some really great photographers.