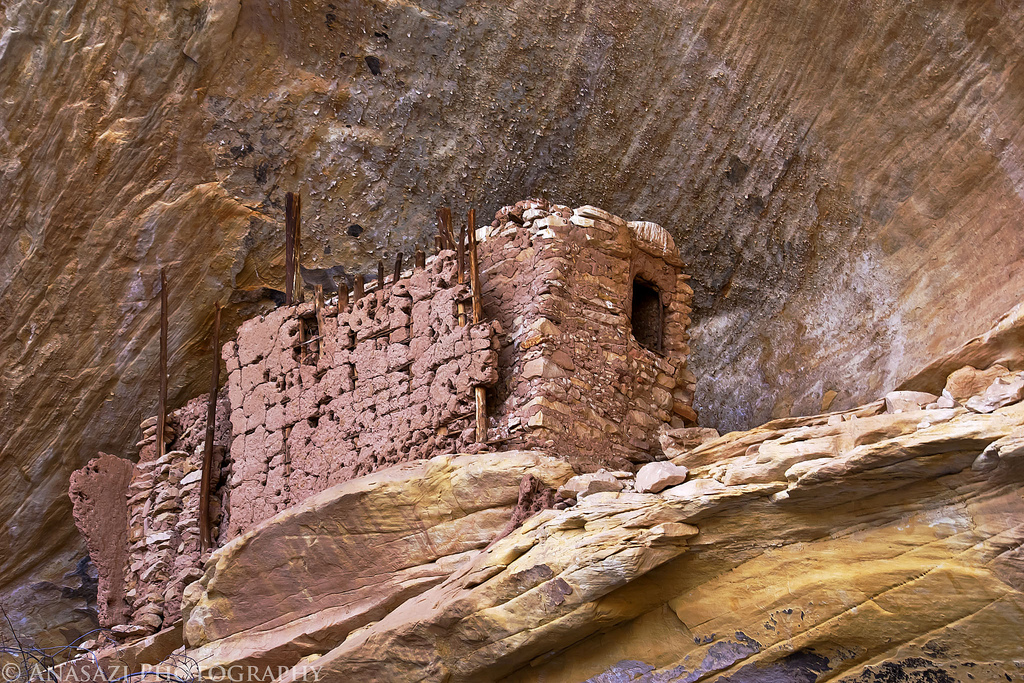 Ninety-seven skeletons were taken from this cave. Many of the men showed evidences of having been killed, as spearpoints were found between the ribs and arrowpoints in the backbones. One case where the hip bones were pinned together with a huge obsidian spearpoint shows that no small amount of force was used to bury a point of that size into two inches of bone. 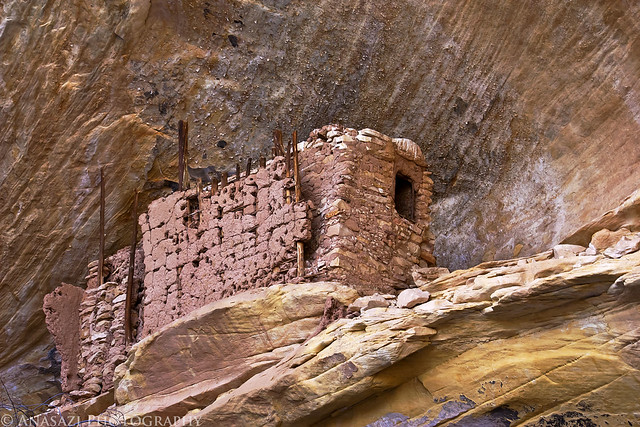 On Saturday while I was in Moab, I got a message from my friend Rick. He wanted to get out of the house on Sunday and wanted to know if I wanted to tag along. He told me that he was interested in visiting Cave 7 in the winter, so I jumped at the opportunity and told him I would definitely go with! Bright and early on Sunday morning I picked him up and headed towards Blanding, topped off the fuel tank and made our way to Cave 7.

On November 29, 1893, Richard Wetherill led the Hyde Exploring Expedition out of Mancos, CO on their way to Grand Gulch. After a stop in Bluff, UT for supplies they headed north on December 11. In a letter written six days later, addressed from “First Valley Cottonwood Creek 30 miles North Bluff City,” Richard Wetherill wrote:

Our success has surpassed all expectations….In the cave we are now working we have taken 28 skeletons and two more in sight and curious to tell, and a thing that will surprise the archaeologists of the country is the fact of our finding them at a depth of five and six feet in a cave in which there are cliff dwellings and we find the bodies under the ruins, three feet below any cliff dweller sign. They are a different race from anything I have ever seen. They had feather cloth and baskets, no pottery–six of the bodies had stone spear heads in them. 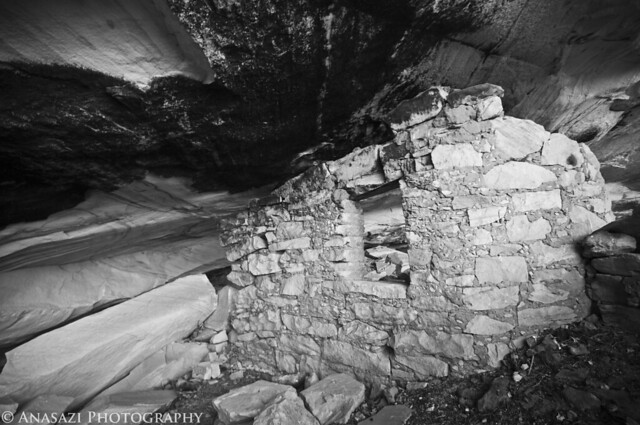 Most of what we know about the route the Hyde Exploring Expedition took and which alcoves they explored is because of the Wetherhill–Grand Gulch Research Project using reverse archaeology to figure it out. Some of the alcoves in the area still have legible historic inscriptions that are dated and were used to help retrace the route they took. At the time of the Basketmaker Symposium in May 1990 the location of Cave 7 was still unknown, but by the end of May the team was close to locating it. The final piece of the puzzle that helped them actually find it didn’t fall into place until three months later when they received some new photographs from the Wetherill expeditions from the Museum of Anthropology and Archaeology of the University of Pennsylvania. Using those photos and the information of the route they had already figure out, they were finally able to re-located Cave 7 again in September of 1990…almost a century after Richard Wetherill had made his Basketmaker discovery there.

After driving to the proper drainage and hiking over a mile through snow, mud and frozen creek crossings we soon reached the box canyon that contained Cave 7. We started out by hiking to the end of the canyon and taking some photos of Box Canyon Ruin (Pastel Alcove Ruin). This was an interesting ruin perched high up in an alcove with part of an outer wall still standing next to it. This ruin was briefly mentioned by Richard Wetherill in some of his notes, and helped verify that this small box canyon was the correct location of Cave 7. 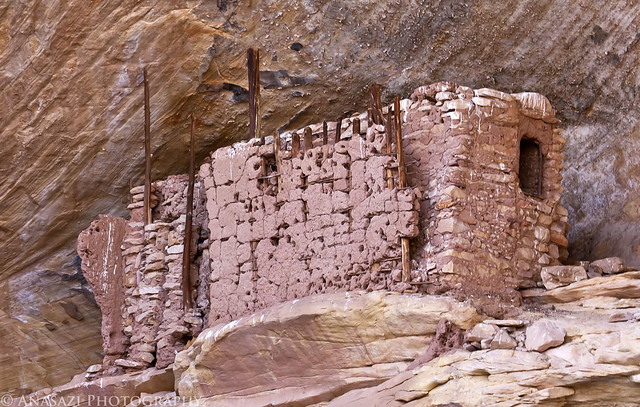 After spending some time at the ruin, we headed back and climbed up to Cave 7. There wasn’t much here, aside from one small wall, but the historical aspect of this site was certainly enough for me. 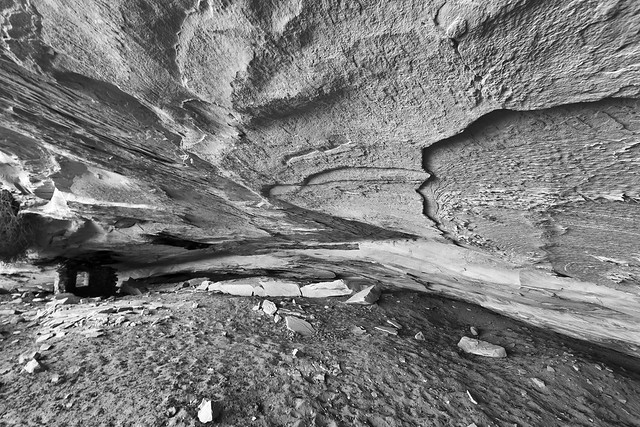 The line of boulders on the floor had not fallen yet in the photos I have seen from the late 1800′s and even from the Wetherill–Grand Gulch team in the early 1990’s. 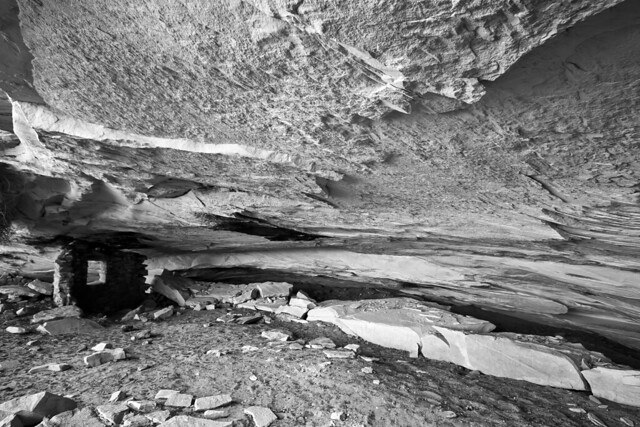 The remaining wall in Cave 7. 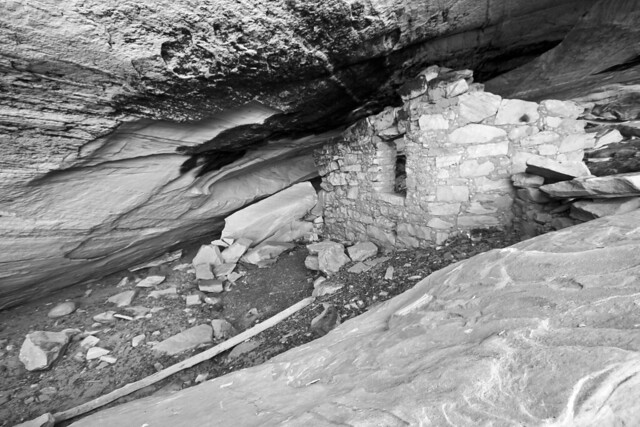 This small ruin is right above Cave 7 in a smaller alcove. 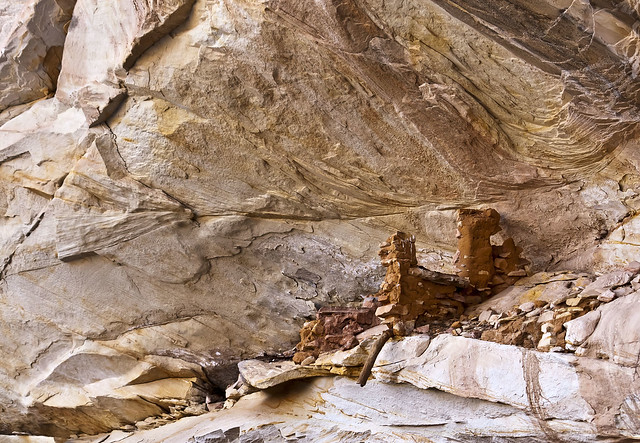 Before heading back we climbed up the slickrock on the other side of the canyon to a few alcoves. One of the shallow alcoves was lined with metate grooves. 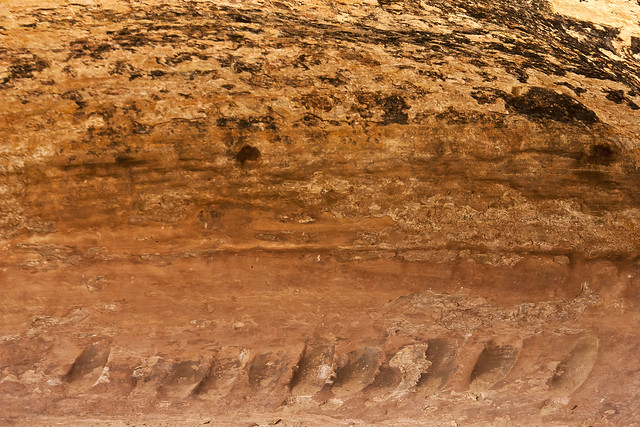 After we finished exploring around Cave 7 and looking for historic inscriptions we started our hike back to the Jeep in the snow. The drive back to the pavement was a bit slick with all the melting snow, but we made it out fine. It was a long drive for a day-trip, but well worth it. We even managed to make it home before dark.

If you are interested in finding out more about the Rediscovery of Cave 7 and Basketmaker Archaeology, I highly recommend the book Cowboys & Cave Dwellers by Fred Blackburn and Ray Williamson.