I was initially thinking about hiking this pair of fourteeners from the West Ridge of Tabeguache Peak, so when I got to the other side of Monarch Pass I headed up the North Fork of the South Arkansas River to explore a little and look for a campsite. I drove all the way up to the North Fork Reservoir and arrived just before it started to rain. I sat in my Jeep and watched the storm for a little while. Once the storm seemed to let up for a bit I continued up the road to Billing Lake, which is actually located just on the other side of the ridge from the Pomeroy Lakes and Hancock Lakes, so I wasn’t really too far away from the area I had been in the previous evening. As I was waiting out another storm at Billings Lake I changed my mind yet again and decided that I’d hike Shavano and Tabeguache from the standard trailhead on the east side of the mountains, so I headed back down to the highway.

A cloudy view over the North Fork Reservoir during a lull between the rainstorms. 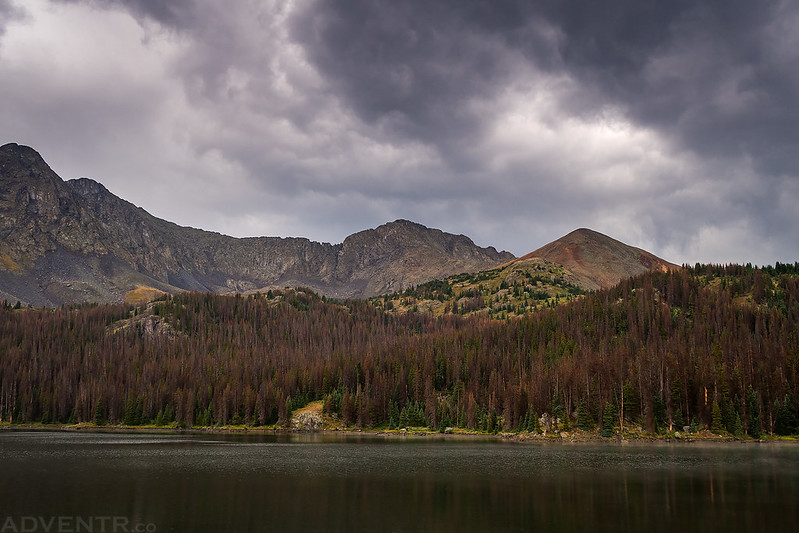 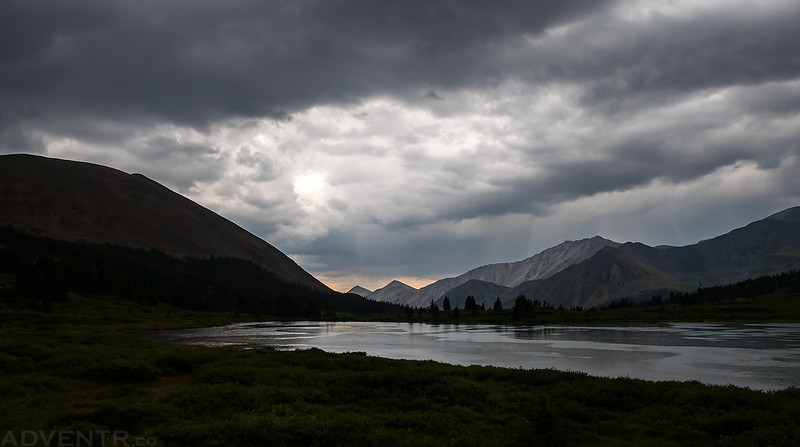 Shortly after passing the North Fork Reservoir on my way back down, a large bull moose walked out right in front of my Jeep and crossed the road. It was a cool sight, but I unfortunately wasn’t able to get my camera ready quickly enough for a photo! The storms picked up again during my drive back down dropping graupel and rain from the sky with a lot of accompanying lightning and thunder. These storms would continue on and off for the rest of the evening until around sunset.

The graupel came down hard for a few minutes and covered the hood of my Jeep. 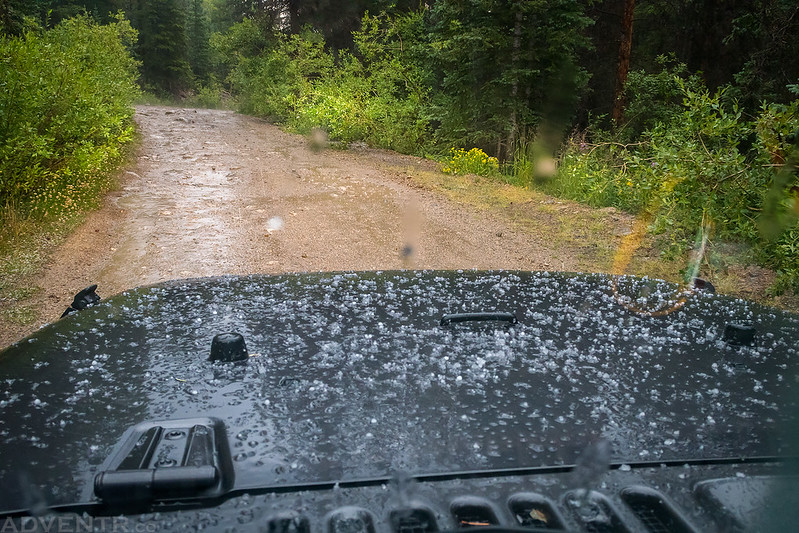 After reaching the highway again, I continued on to the Mount Shavano Trailhead and then followed the road just a little bit further until I found a place to camp in Weldon Gulch. The storms finally ended shortly after the official sunset and I went to bed early right after it started to get dark out since I was planning for another alpine start on Friday morning.

I slept well overnight and was wide awake when I got up at 3:30am. I had a small breakfast and drove the short distance over to the trailhead and was the first vehicle in the parking lot. I started hiking around 4:00am and followed the Colorado Trail for a short distance before getting off it and following the Mount Shavano Trail to the summit. As the sky became lighter I could tell it was going to be another smoky morning.

There was plenty of frost on the brush along the lower portion of the trail this morning that was illuminated by my headlamp. 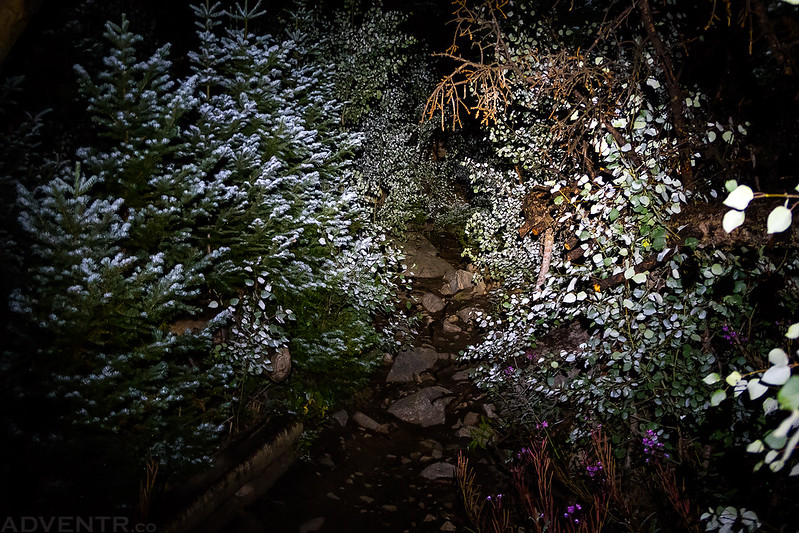 I was still in the trees as dawn arrived, but getting closer to treeline. 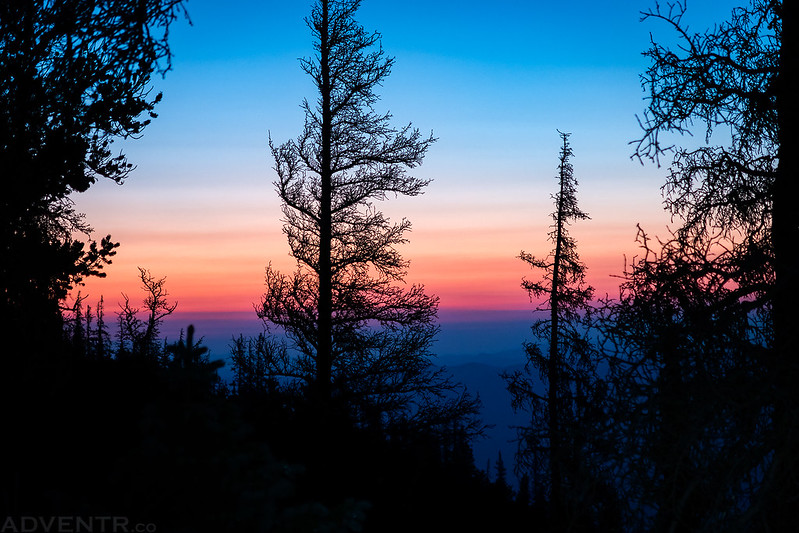 Getting up and out of the trees on the East Slopes of Mount Shavano. 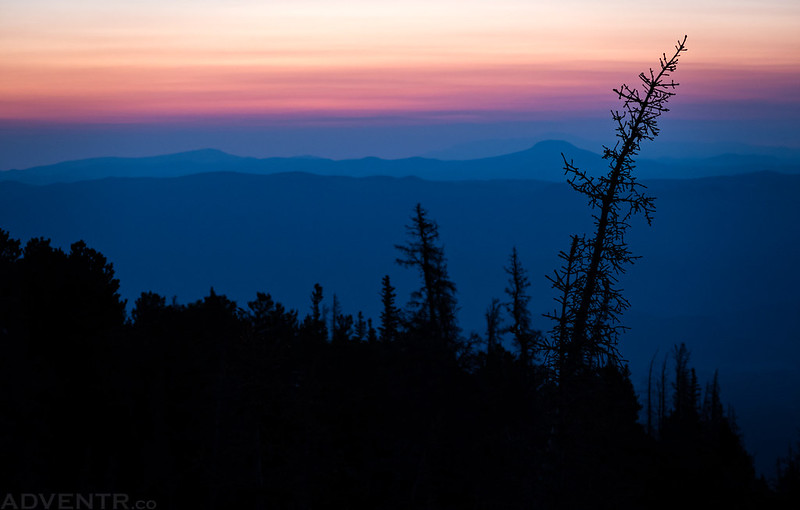 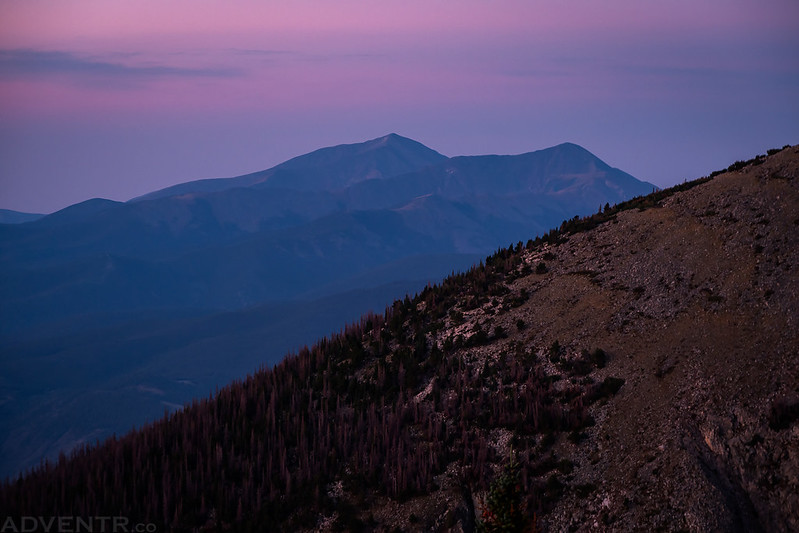 A little bit of alpenglow on Esprit Point (13,630) as I followed the well-worn trail. 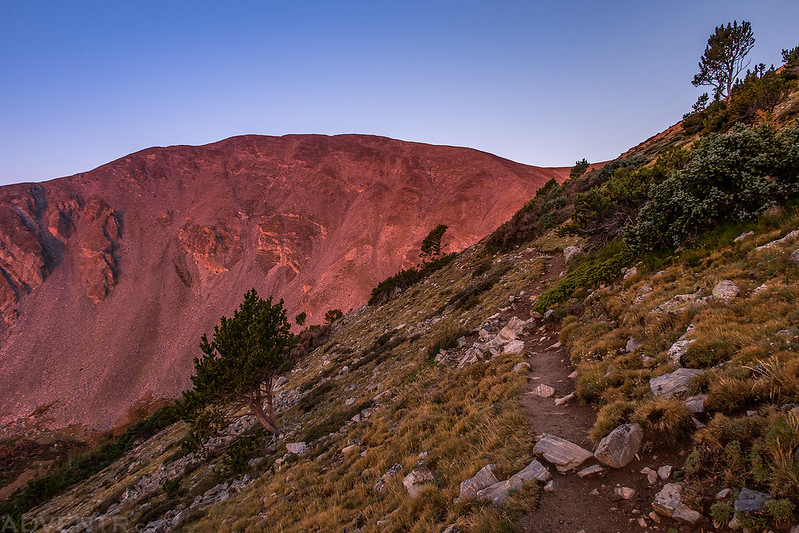 The sun coming up behind me over the Arkansas River Valley 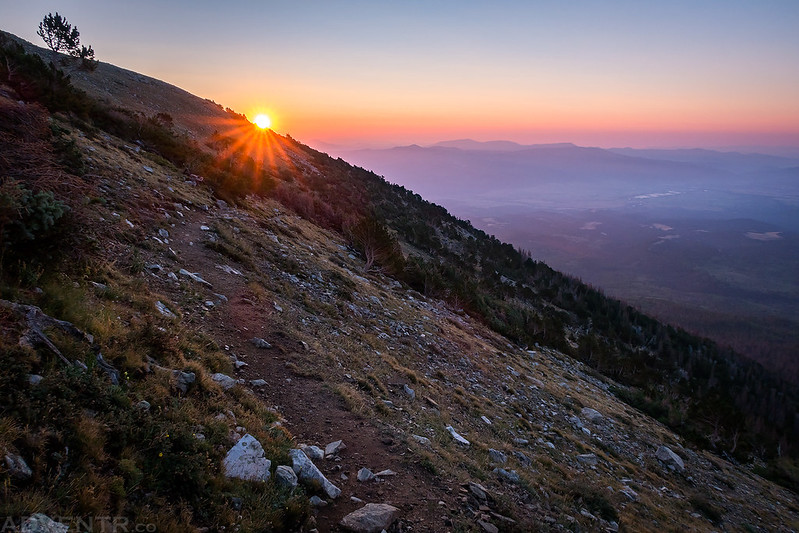 Sunlight on the trail to the saddle. 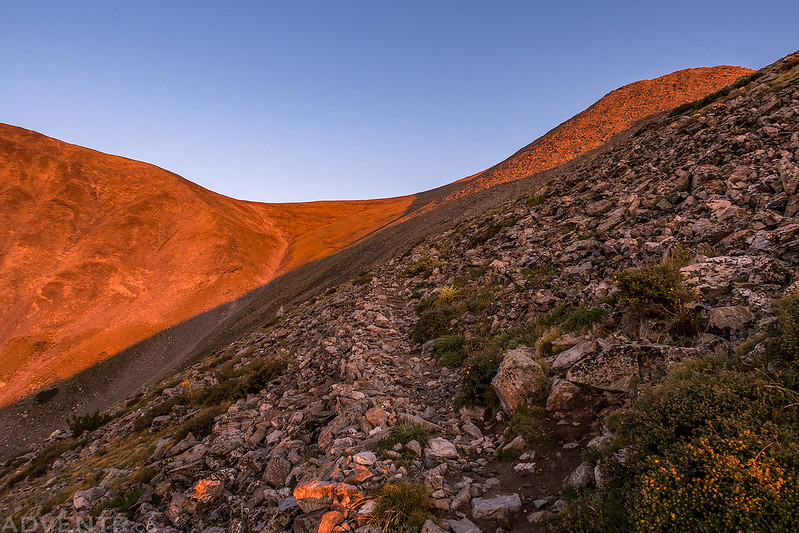 After reaching the saddle I had a good view of the remainder of the route to the summit. 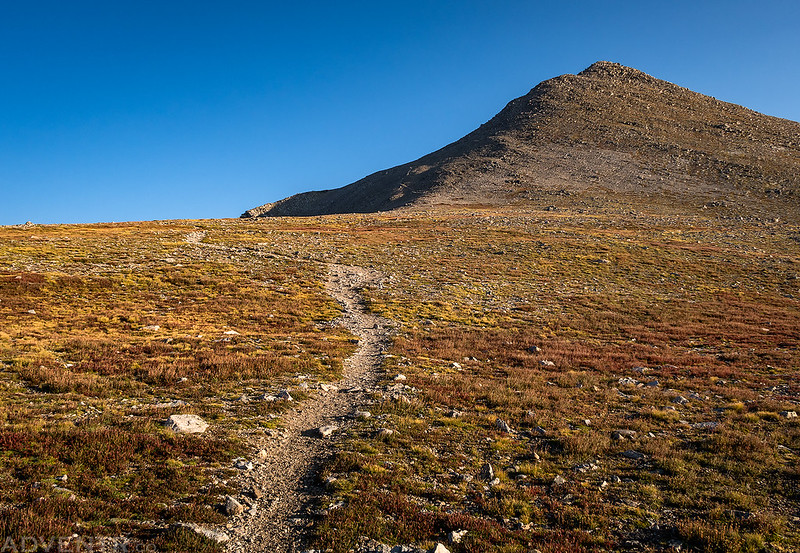 Looking back down to the saddle and Esprit Point. 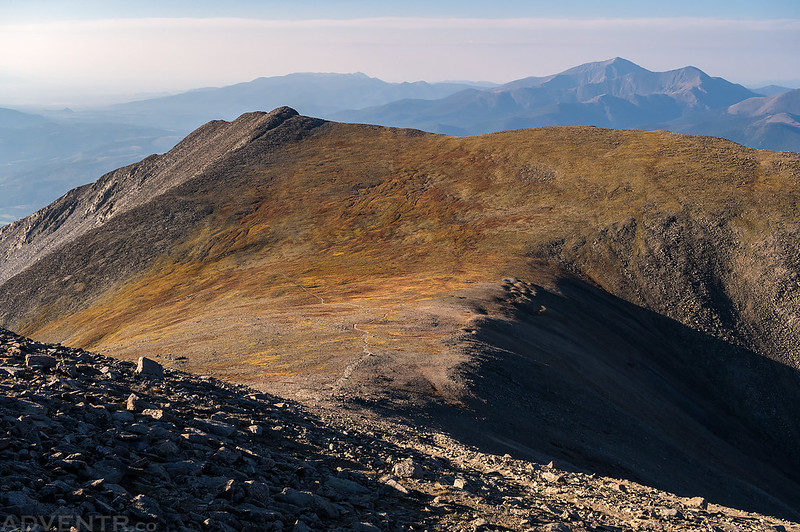 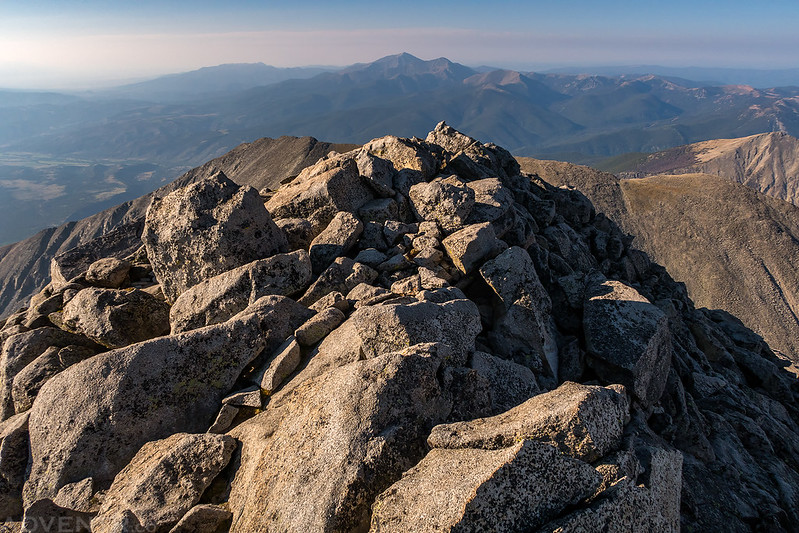 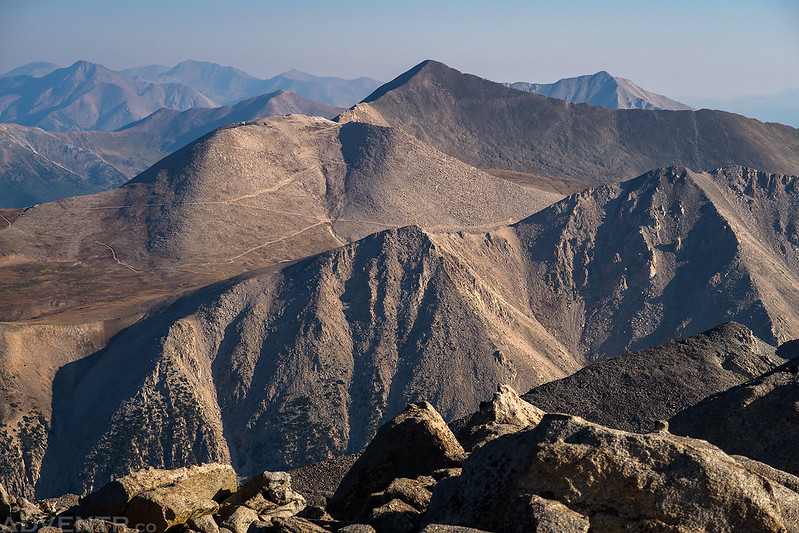 Starting my hike over to Tabeguache Peak with the distance peaks disappearing into the thick smoke on the horizon. 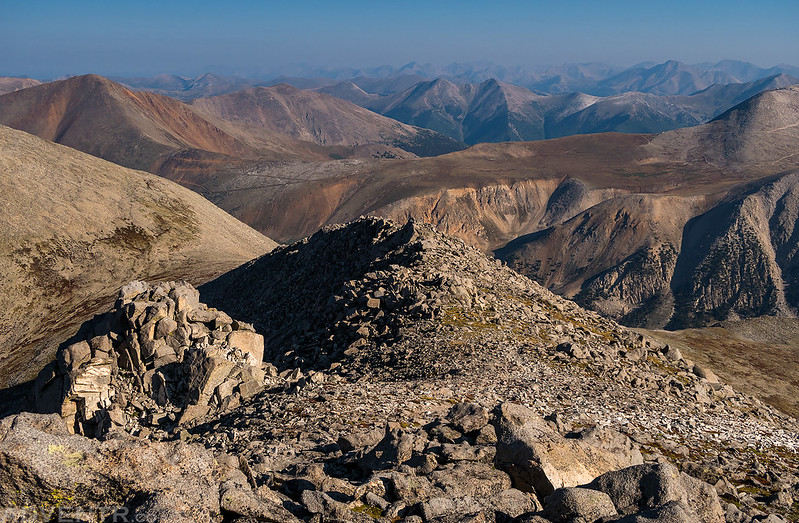 Almost down to the saddle looking up at Tabeguache Peak. 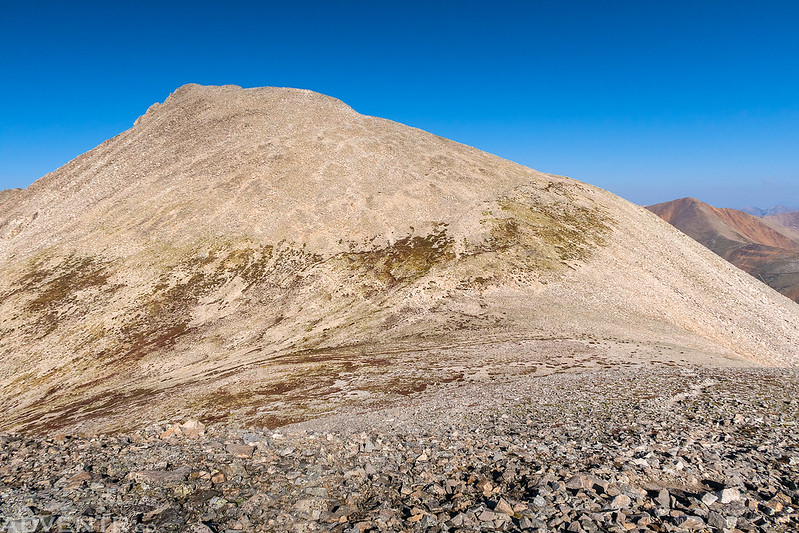 There was a nice view over Browns Creek as I climbed the rocky ridge of Tabeguache. 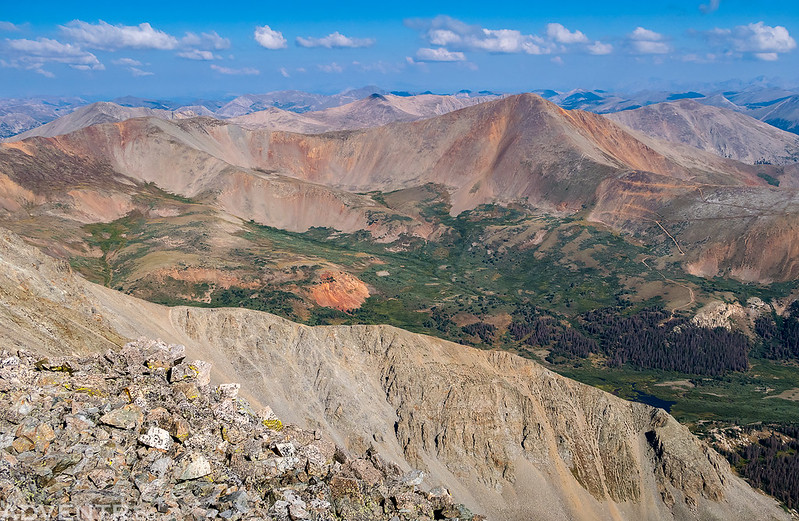 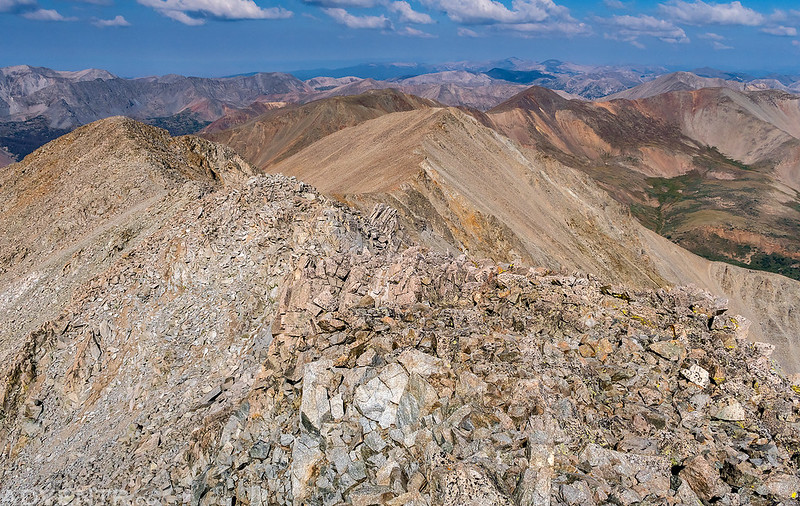 On my way back over to Mount Shavano the clouds lined up to make it look like a volcano erupting. Well, at least I think so… 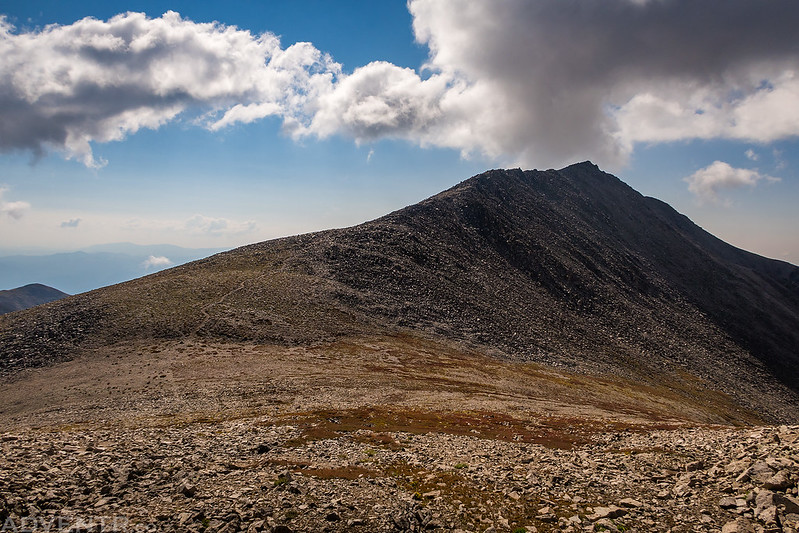 A view towards Taylor Mountain and the Monarch Ski Area from the saddle. 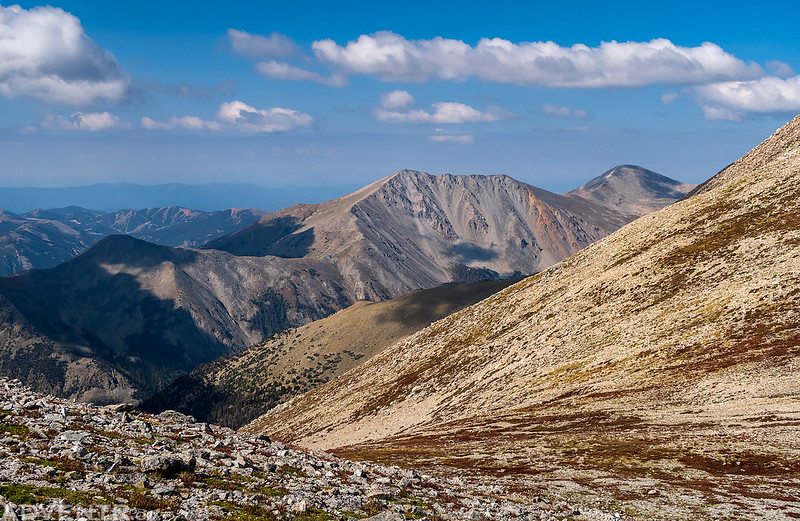 Following the rocky ridge back to the summit of Mount Shavano. The clouds were building pretty quickly at this point. 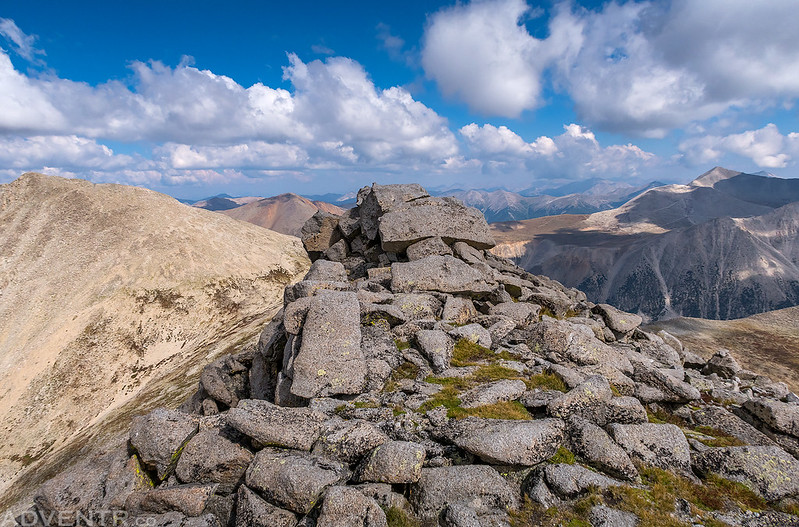 Dark clouds began to form over the summit as I neared the top. 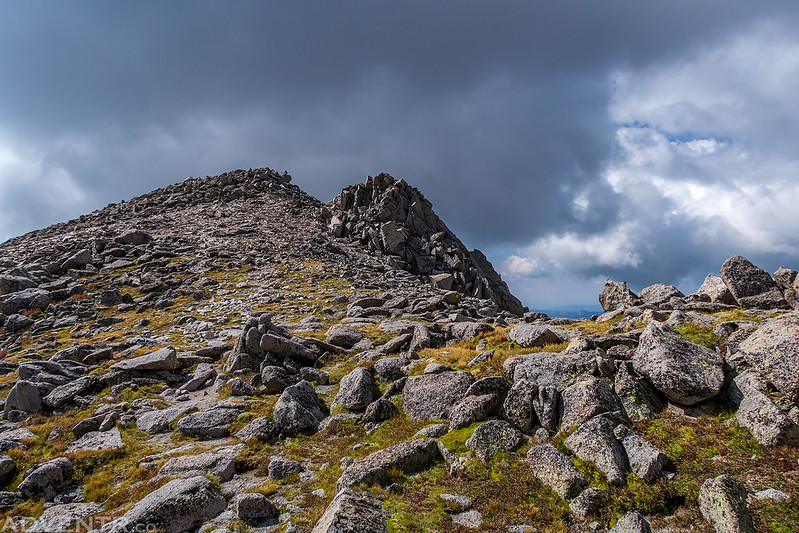 One last look back at Tabeguache Peak, this time with some nice clouds in the sky instead of smoke. 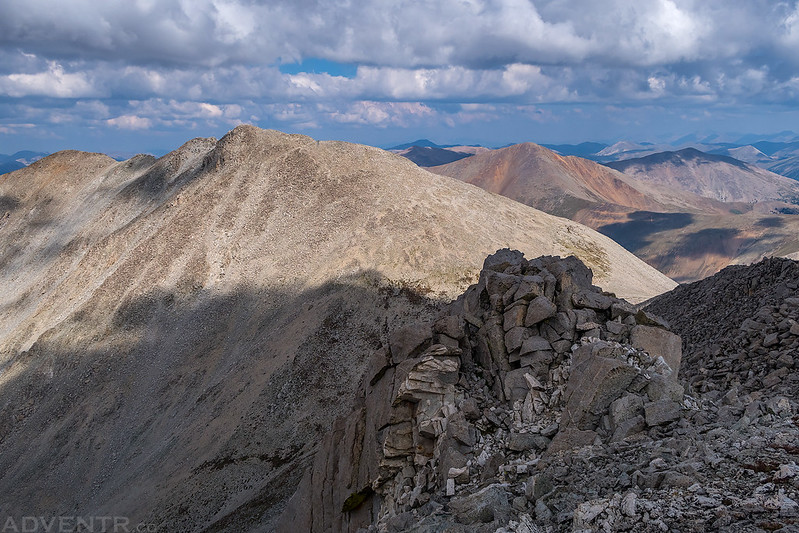 When I reached the summit of Mount Shavano for the second time there were some low dark clouds just above. These clouds definitely had me a little worried, especially since they had built so quickly, but they would end up dissipating as I hiked back down to the trailhead. 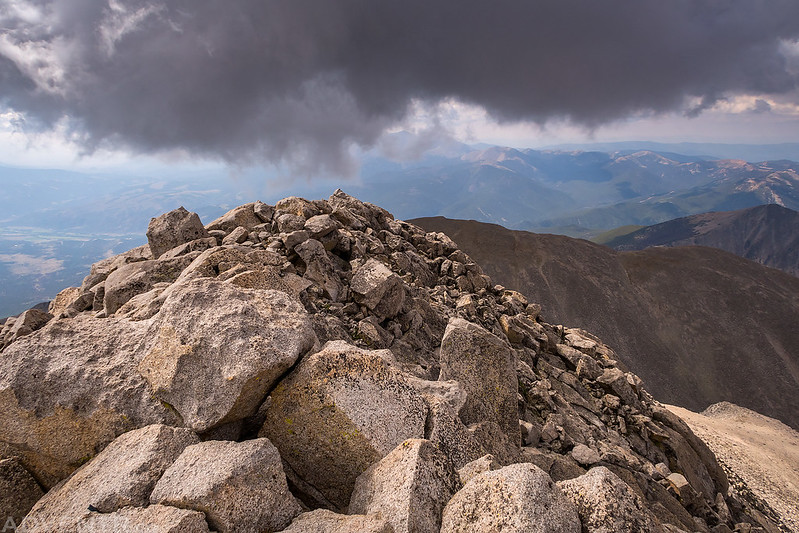 Overlooking McCoy Creek from the summit. 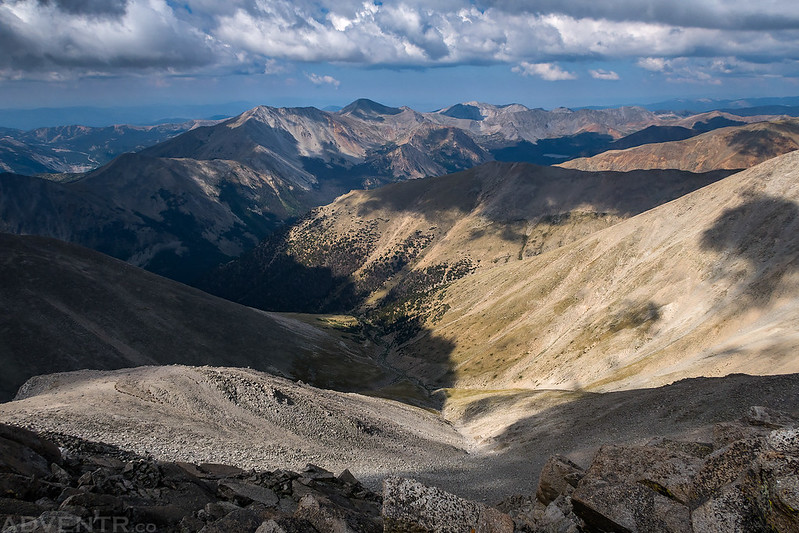 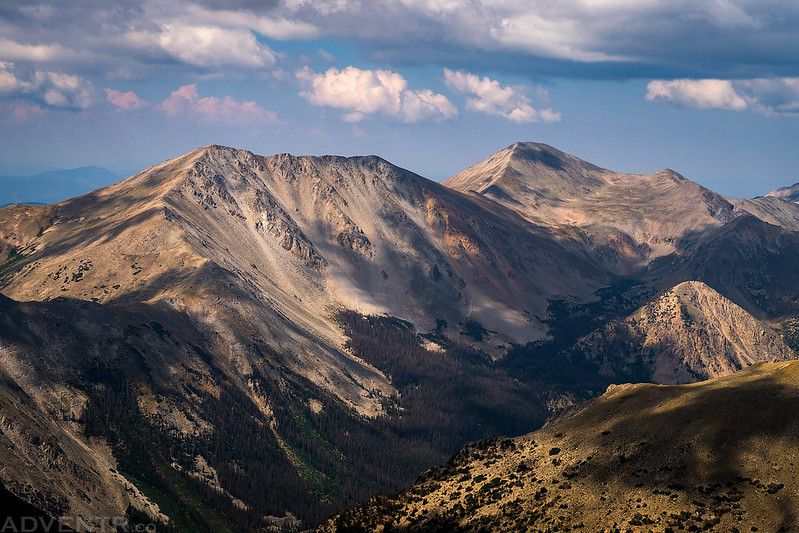 Mount Shavano in the light as I hiked back down to the saddle. 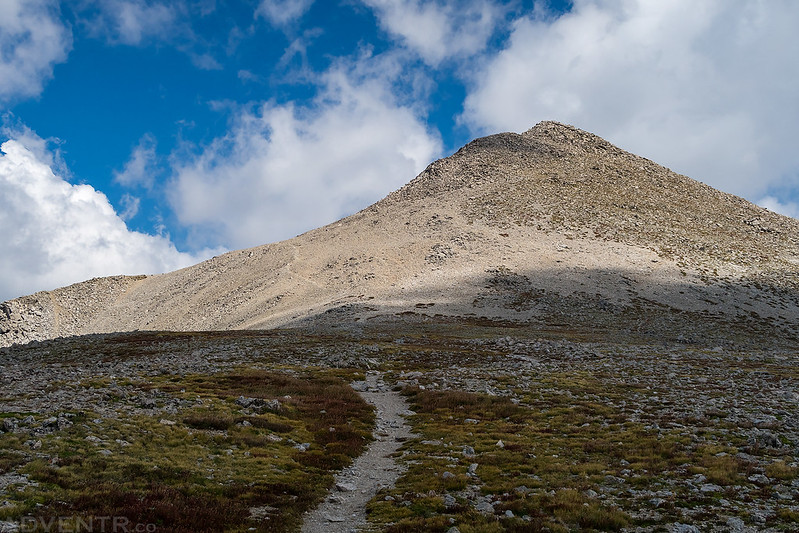 As I hiked back down from the summit the clouds that had me a little bit worried started to dissipate without causing any trouble. When I returned to the trailhead I decided that I had had enough climbing for one week and would skip visiting the San Juan Mountains on this trip since I frequently visit them on my weekend trips. Plus, everything would be getting busy again for the weekend. Instead, I would head back home a couple of days early so I could relax all weekend with Diane before going back to work on Monday. It had been a great week in the mountains of Colorado!