Driving up into Montezuma Basin with Greg Mace Peak (12,580) lit up in the background. 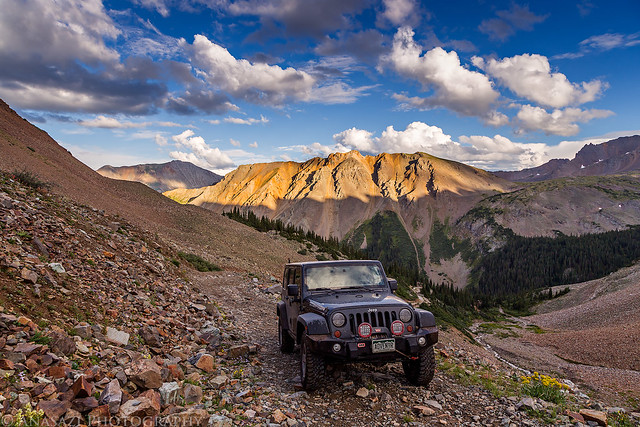 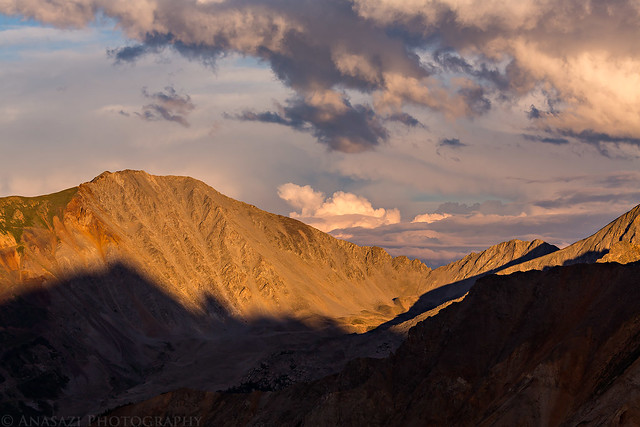 My campsite for the night. It probably wouldn’t make a good place to camp if it was windy out, but luckily the air was pretty calm and clear all night. 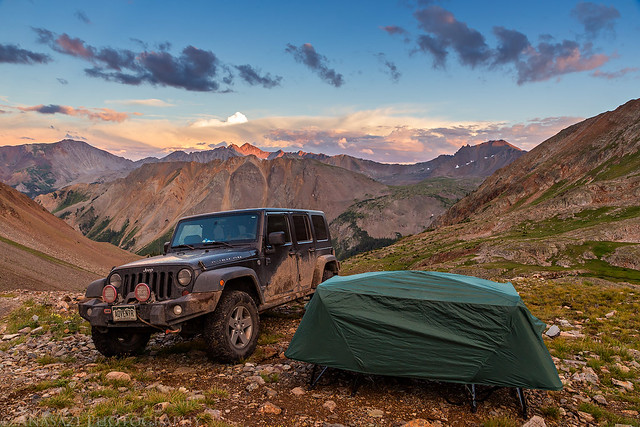 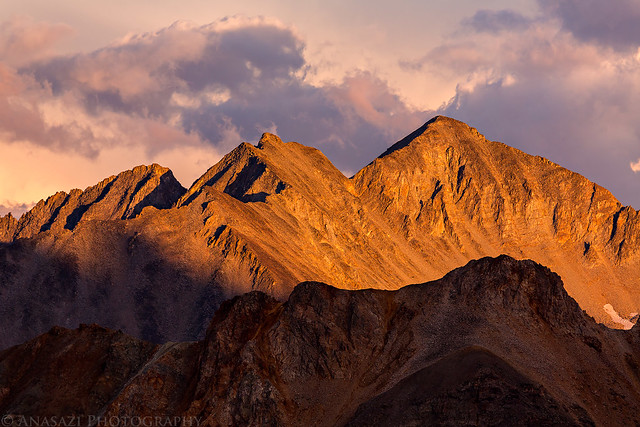 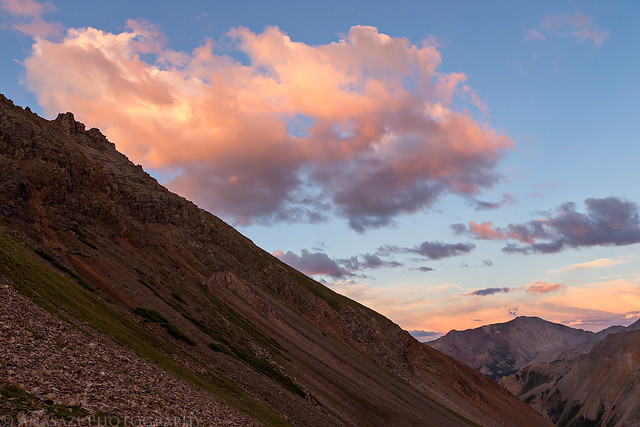 On Saturday I woke up to my alarm at 4:00am and quickly got my camp packed up into the Jeep. While I was out under the stars early in the morning I saw a couple meteors shoot across the sky from the annual Perseid’s Meteor Shower and also had a great view of the Milky Way over the silhouettes of the mountains around me. I had a small breakfast and then drove the rest of the way to the end of the road. I waited until shortly before 5:00am to start my hike since I didn’t want to hike across the ridge to the summit in the dark. After leaving my Jeep, I hiked through the basin in the dark with help from my headlamp. There wasn’t much of a trail to follow in this section as I crossed the large loose rocks in upper Montezuma Basin. Occasionally I would find a cairn or trail segment to follow, but mostly it was just boulder-hopping. I came across one snowfield that I needed to cross and maybe if it were lighter out I could have found a way around it, but it seemed easiest to just cross it where I was. The snow was pretty hard and icy since it was cooler overnight and I couldn’t kick steps into it, but I had brought along my microspikes and used them to cross which made it easy. I eventually found my way across the boulder-field to the easy-to-follow trail that would take me up to the ridge.

I timed my hike perfectly since I arrived on the ridge just as the sun was coming up for the day. 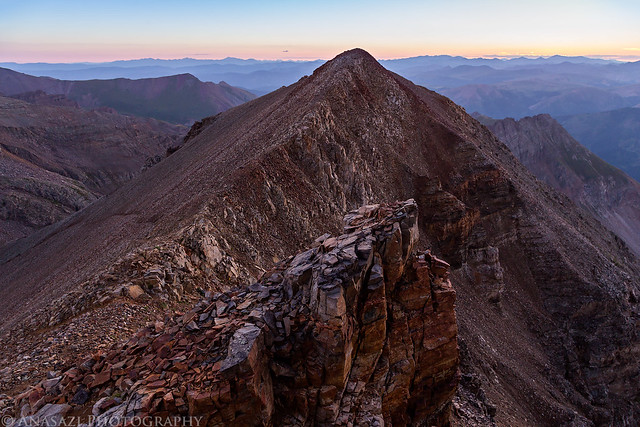 The first light of the day strikes Conundrum Peak (14,060) on the other side of the basin. 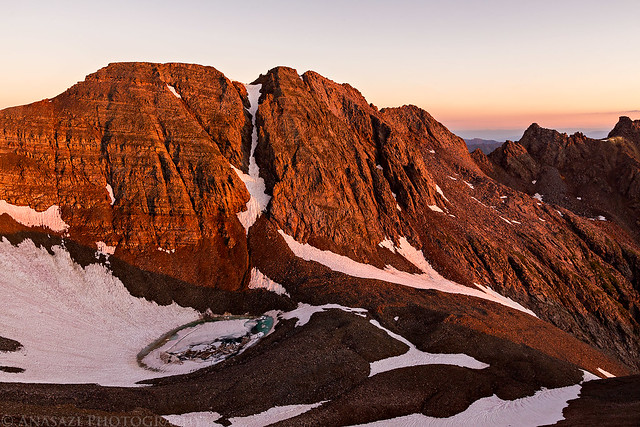 Warm morning sunlight on the ridge as I followed it to Castle Peak (14,265). 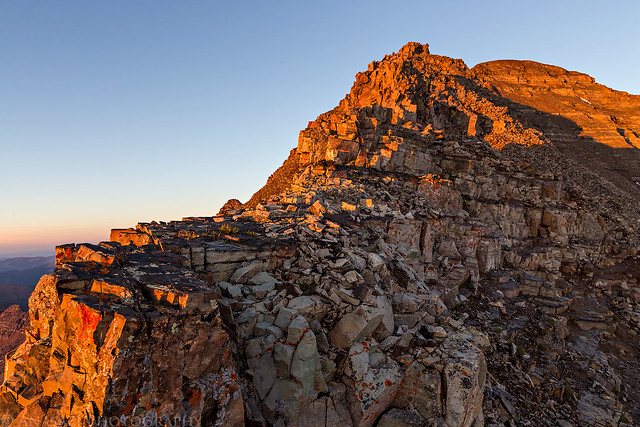 This is the section where I ran into my only issues of the hike. For some reason I thought I needed to stay off the very top of the ridge and dropped down on the right side to bypass it. This turned out to be a bad idea and I ended up in some very loose scree that moved a lot with every step and then I had to climb up a very steep chute to get back up to the ridge. Once I was back on top of the ridge it was easy hiking again. 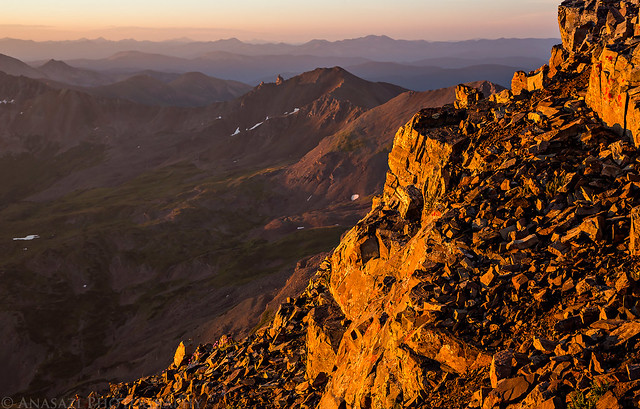 My shadow and the final climb to the summit of Castle Peak. 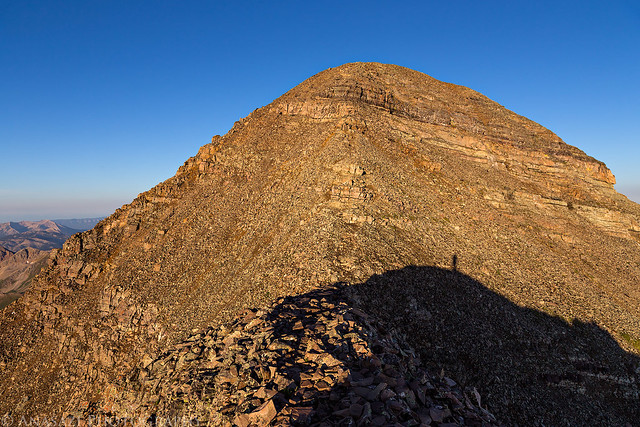 Looking back down the ridge from the way I had come on this hazy morning. 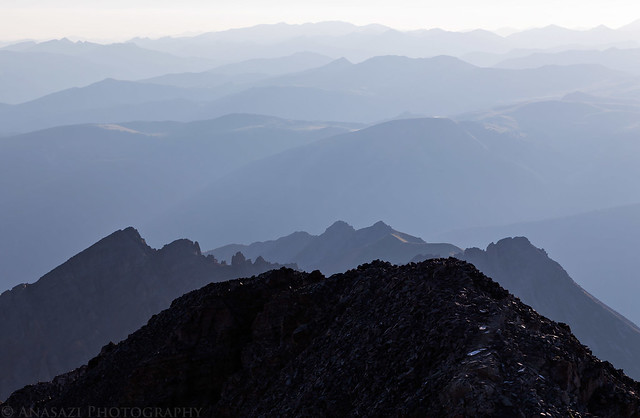 On the summit of Castle Peak. I was the first one up here and had it all to myself. 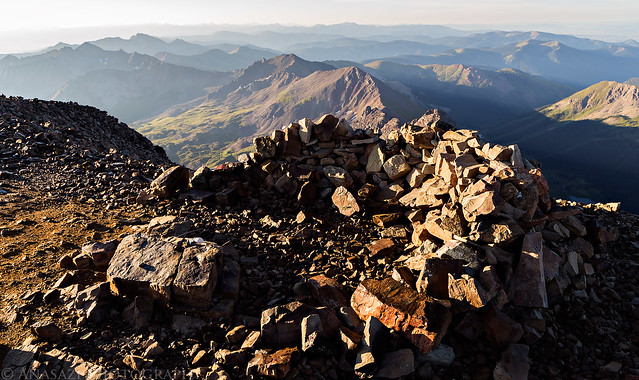 There was a great view of all the fourteeners in the Elk Mountains from up here including the Maroon Bells, Snowmass Mountain, Capitol Peak and Pyramid Peak. Mount Sopris is visible all the way in the upper right, too. 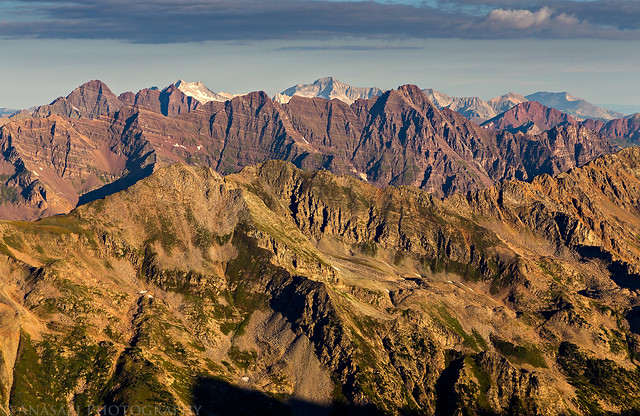 Looking down over the route to Conundrum Peak as I started to descend to the saddle. 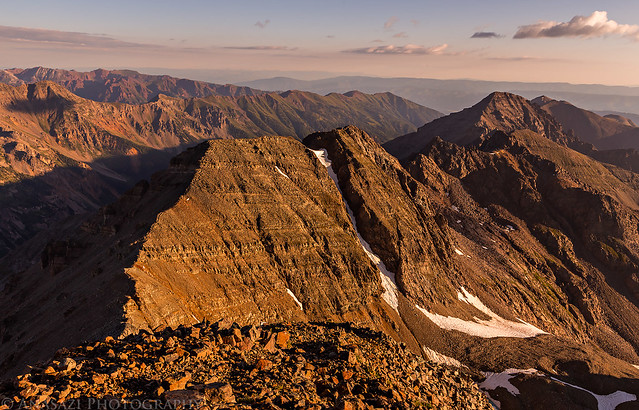 Following the ridge on top of Conundrum Peak to the summit. 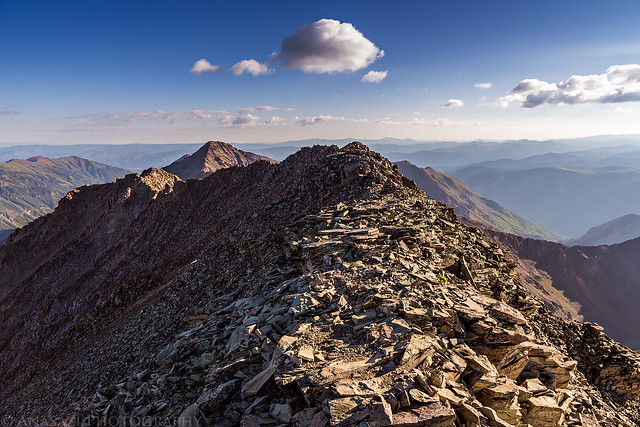 Another hazy view from the top of Conundrum Peak. I also had this summit all to myself and wouldn’t run into any other hikers until I was on my way back up Castle Peak. 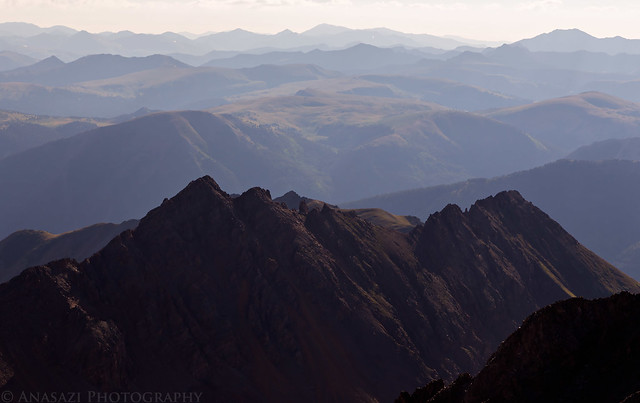 View into Montezuma Basin from the saddle between Castle and Conundrum. I had considered descending from the saddle, but decided against it since it looked too steep and loose for me. I thought that returning the way I had come would be best even if it meant climbing back over Castle again. 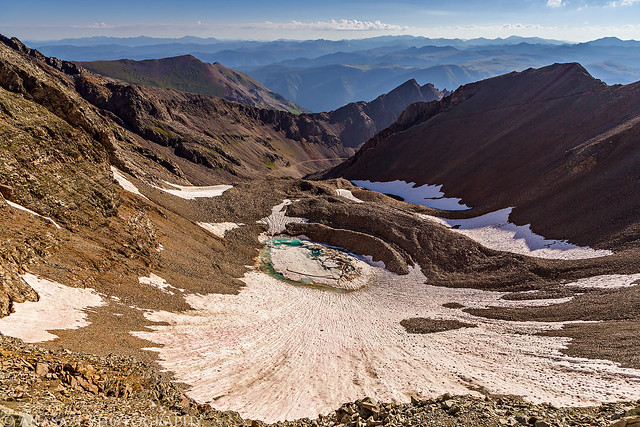 Looking down into Middle Brush Creek when I reached the summit of Castle for the second time. 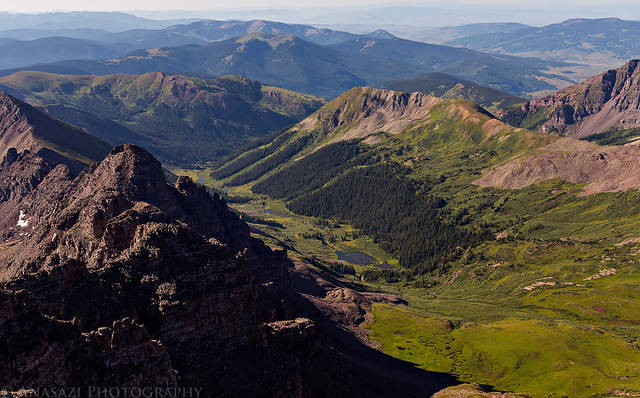 The hike back down in the daylight was much easier, especially since I stayed on the very top of the ridge this time. There was even a faint trail to follow in many places back down through the rocky basin that I hadn’t been able to see in the dark.

After returning to my Jeep I drove back down to Aspen and then continued on to Carbondale, where I stopped for a tasty lunch at White House Pizza. I topped off the fuel tank in my Jeep and followed the highway along the Crystal River out of town and over McClure Pass to the turnoff for the Kebler Pass Road. I drove over Kebler Pass and then past Lake Irwin on my way up above Robinson Basin. I was considering camping in this area for the night so that I could hike Scarp Ridge the following morning, but had no idea how popular this area was! There were people camped everywhere and it’s not somewhere I really wanted to spend the night. Since it appeared that the weather was holding out for the afternoon and there were no storms moving into the area, I decided to hike up Scarp Ridge this afternoon and then head home instead of spending the night here. I drove below Ruby Peak (12,644) to the end of the rough road and parked at the base of Mount Owen (13,058) and Purple Peak. From there I hiked up to Scarp Ridge and followed the ridge to the summit. There were great views in all directions of the surrounding Elk Mountains and into the Raggeds Wilderness below.

Near the end of the road along a flower-lined two-track below Purple Peak (12,820). 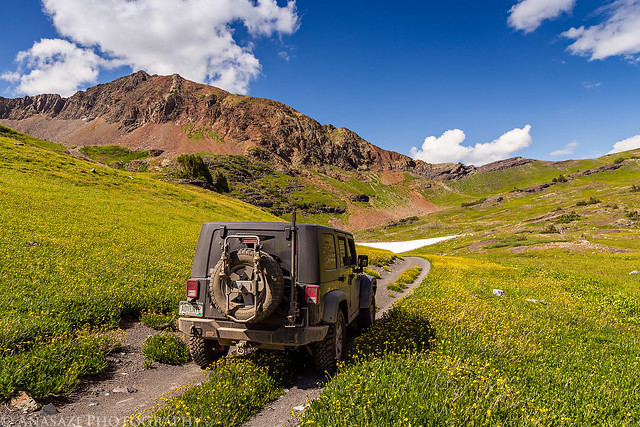 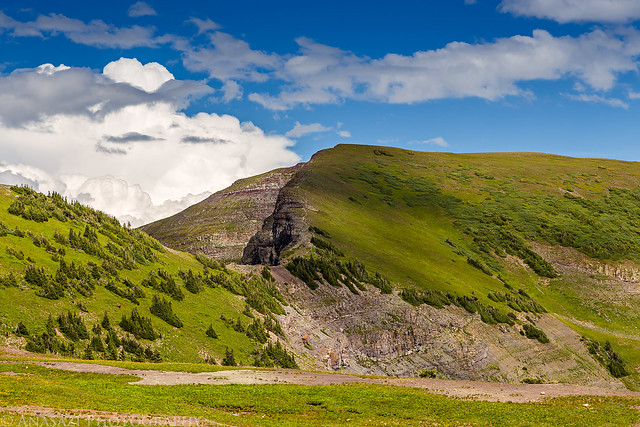 A great view over Blue Lake and the Oh-Be-Joyful Basin. I’d definitely like to backpack down there sometime in the future. 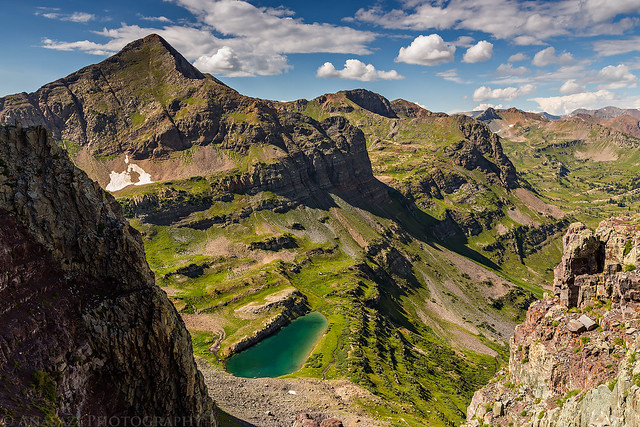 Following the ridge to the top. 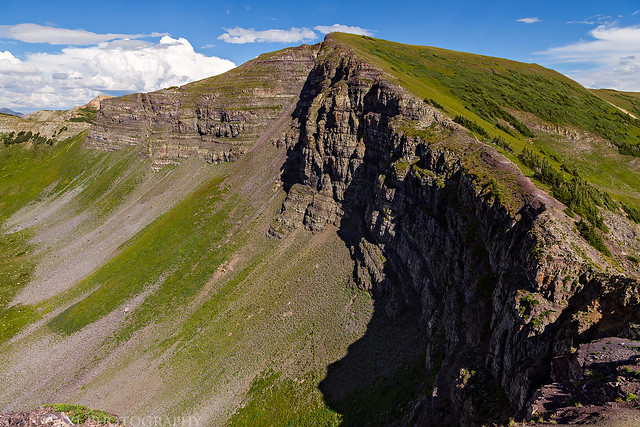 Looking down Scarp Ridge as I hiked back from the summit. 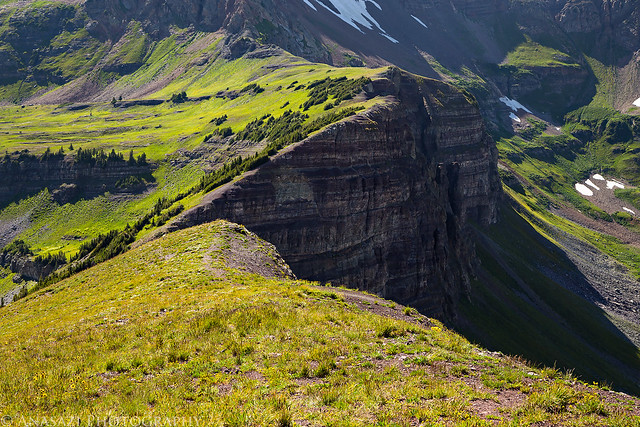 I really haven’t felt like taking many photos of wildflowers this season, but this one caught my eye as I hiked by. 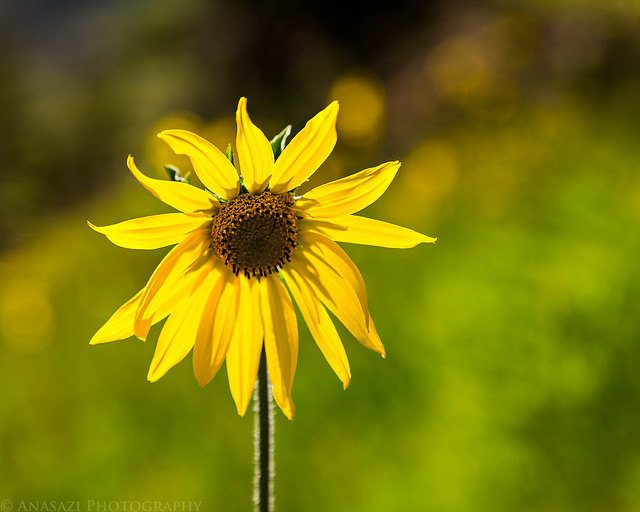 East Beckwith Mountain as I drove back home along Kebler Pass Road. 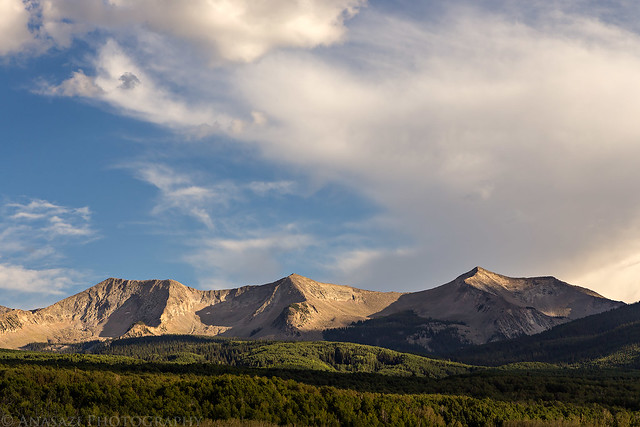 Now that I’ve finally climbed my first 14ers in the Elk Mountains, that only leaves the Sangre de Cristo Range as the only mountain range in Colorado that I have not hiked a 14er in yet. I’m hoping to make it down that way next summer so I can try to get at least one in that range.