The snow was coming down pretty hard when we reached Balanced Rock. 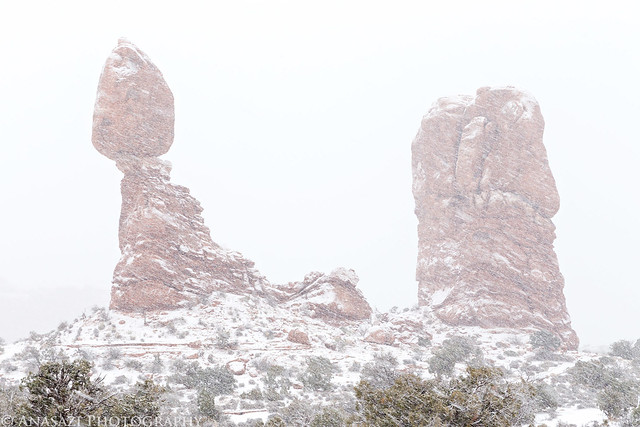 It was snowing pretty good when we passed the Garden of Eden, too. 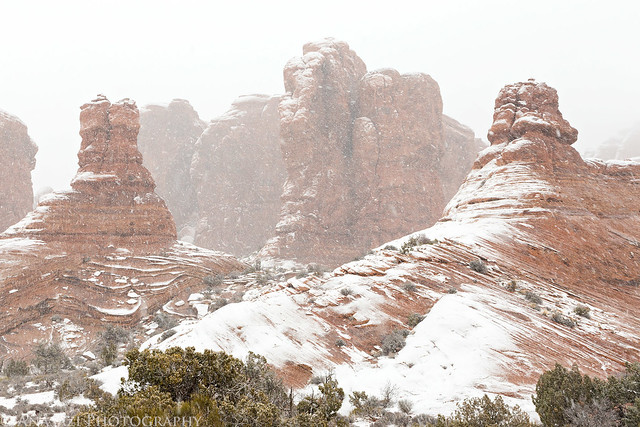 Diane stopped for a photo in front of the North Window. 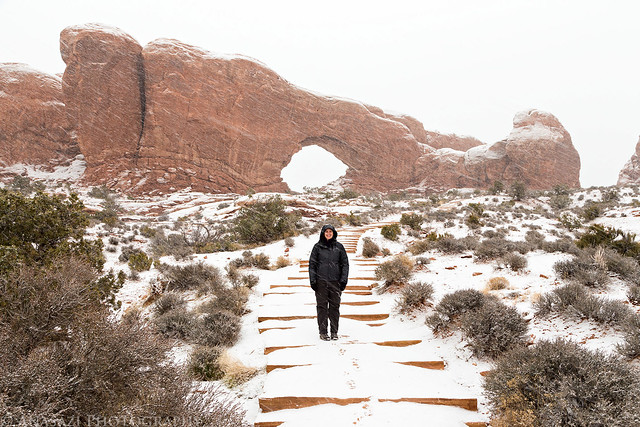 Turret Arch through the heavy snow. 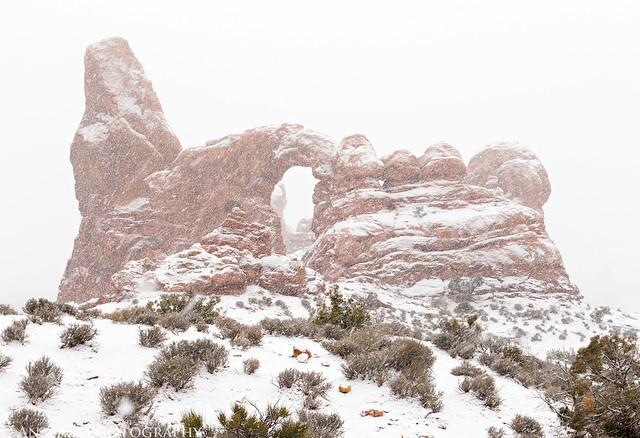 When we reached the North Window, I managed to scramble up to the view of Turret Arch framed through the Window. It was a little sketchy and slippery with snow on the rocks, but I managed to make it up there carefully.

Turret Arch framed through the North Window in a snowstorm. 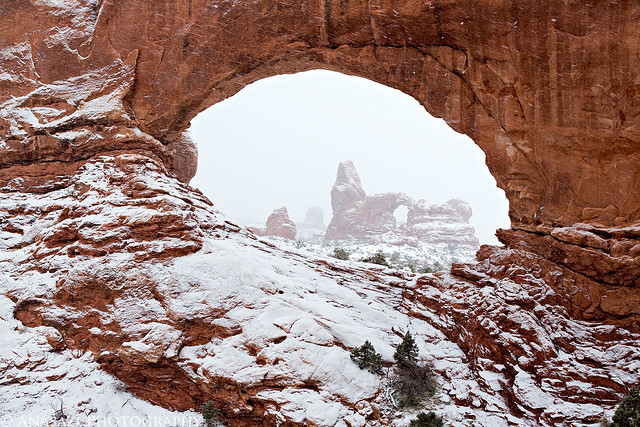 Nice snowy views all around. 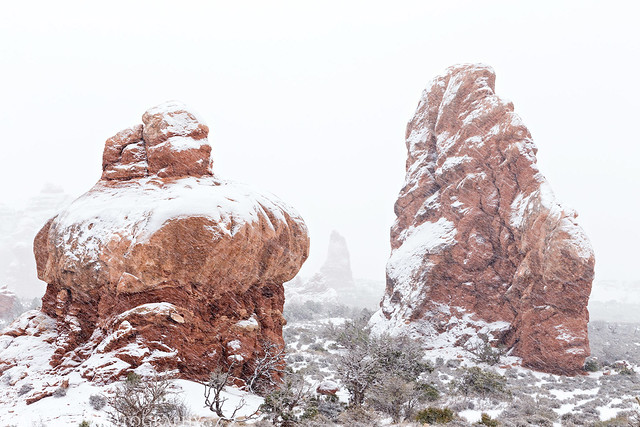 Hiking back down from The Windows after completing the short loop. 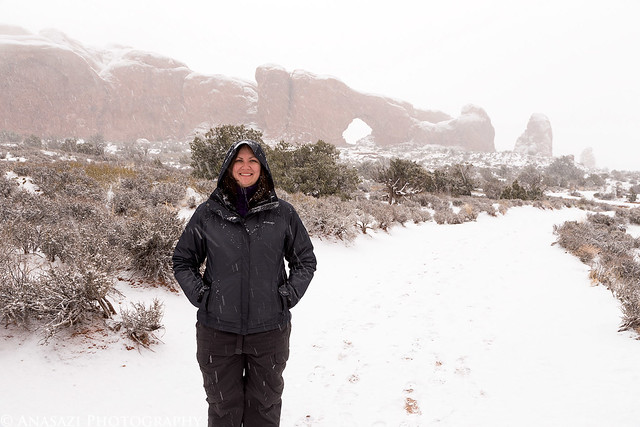 Before leaving the area, we made sure to stop at Double Arch. 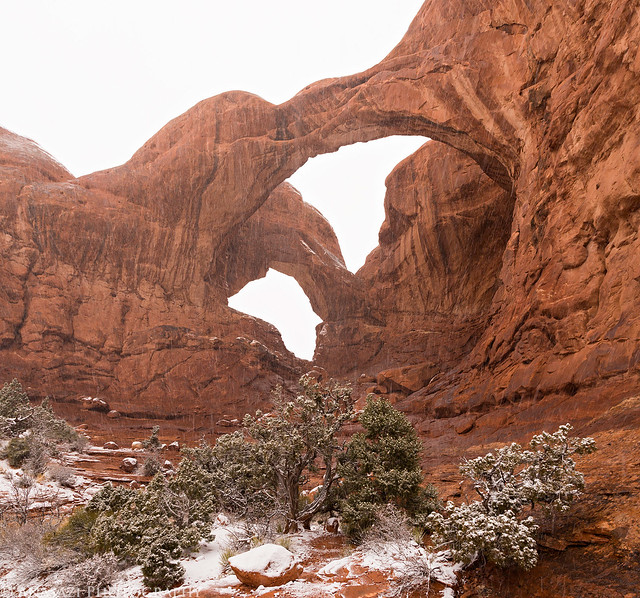 Next, we were planning on going to Devil’s Garden so we could hike to Landscape Arch, but we made a short detour to visit Sand Dune Arch on the way. Diane had never visited this arch before and I prefer to visit it in the winter when there aren’t usually a lot of people around. We had the place to ourselves.

A snow-covered Juniper along the trail. 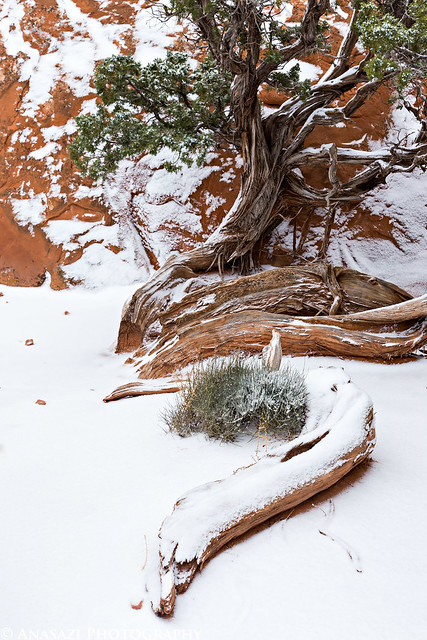 Diane hiking between the fins to the arch. 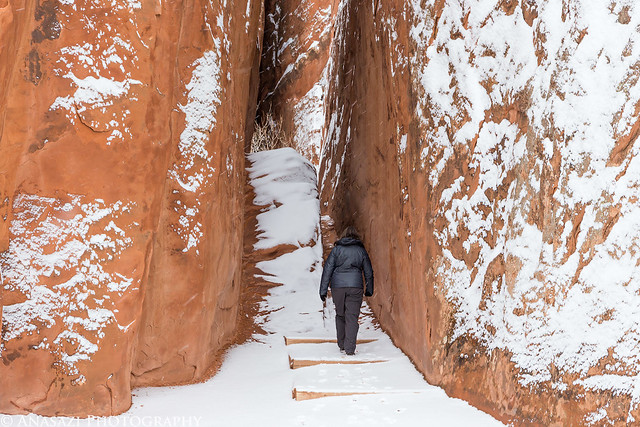 Trail to Sand Dune Arch by IntrepidXJ, on Flickr 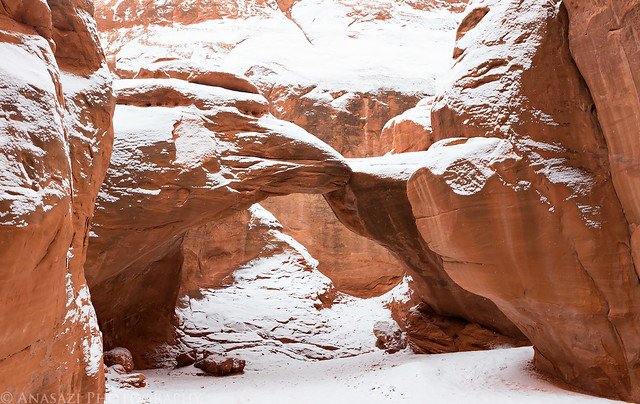 Besides just visiting Arches on Christmas, I always make sure to hike to Landscape Arch, too. Just to make sure it’s still standing…

I was a little difficult getting up on this fin for a view from the right side of Landscape Arch. 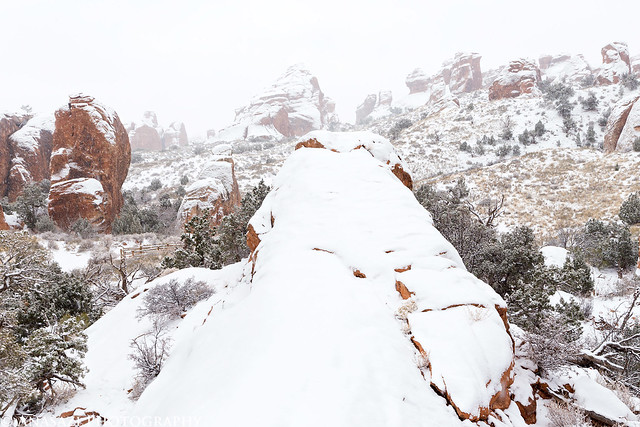 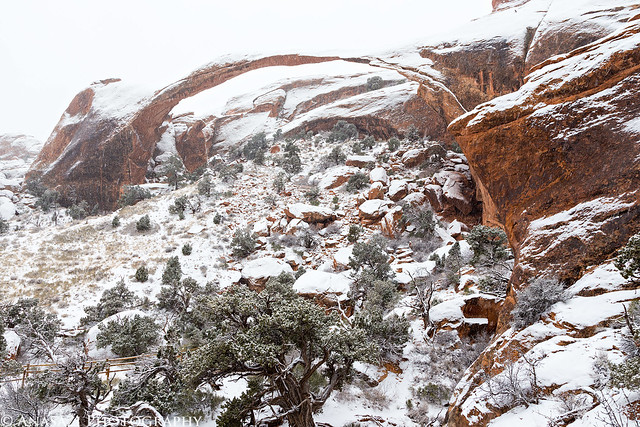 A different view as we hiked back towards the trailhead and the snow picked up again. 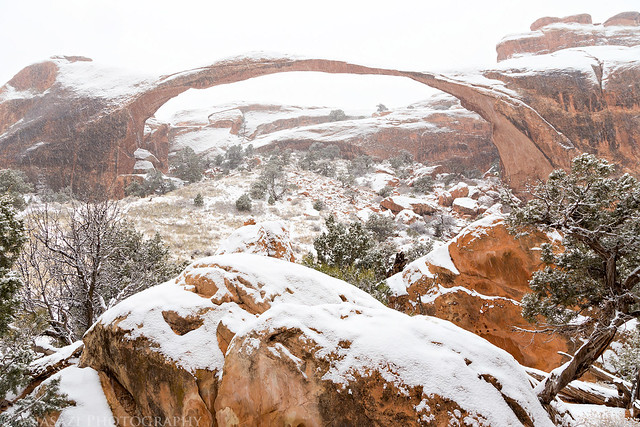 Last year I found this little tree near Pine Tree Arch that would make a nice Christmas Tree. 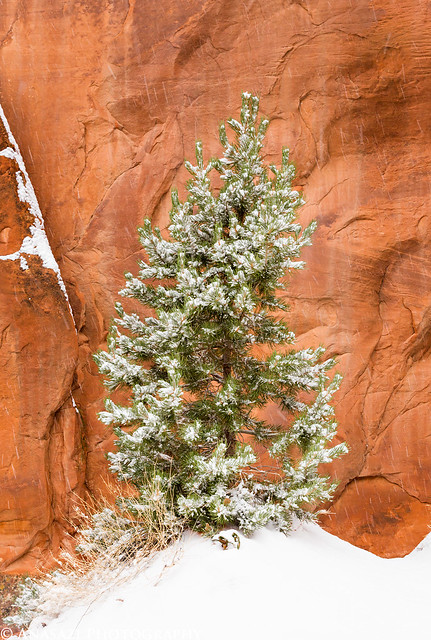 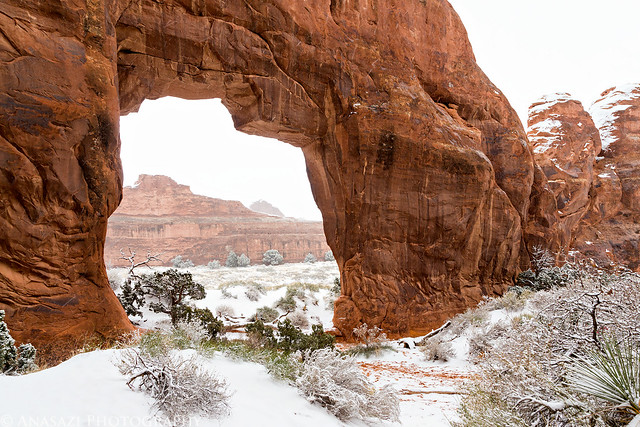 Diane under the arch. 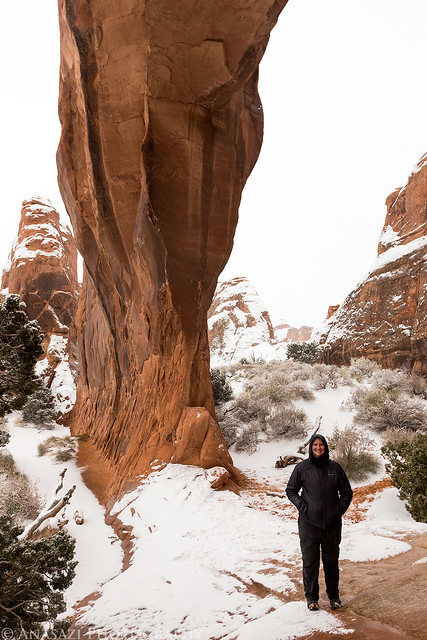 We made a quick stop at Tunnel Arch on the way back. 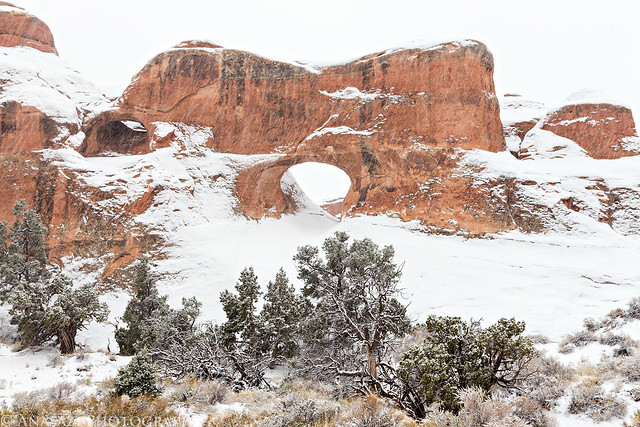 It started snowing pretty hard again as we left the Devil’s Garden. 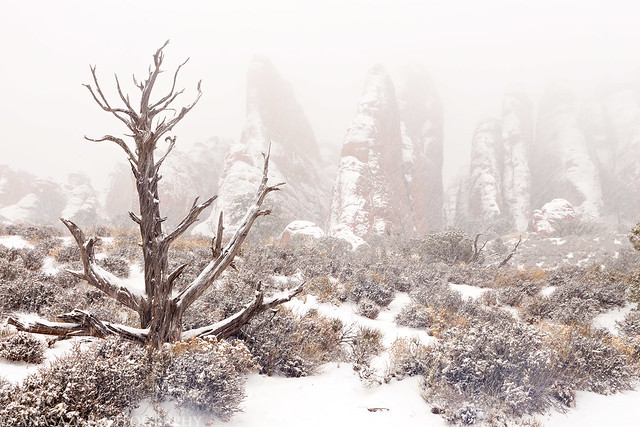 We had originally planned to hike the whole Primitive Loop today, but we changed those plans with all the snow on the ground that made the trail slick. Instead we decided to visit Ring Arch on our way back out of the park since it had recently suffered a partial collapse. Who knows how much longer it will still be standing? As we hiked up Courthouse Wash the clouds even cleared out a little bit and let some blue sky and sunlight through. 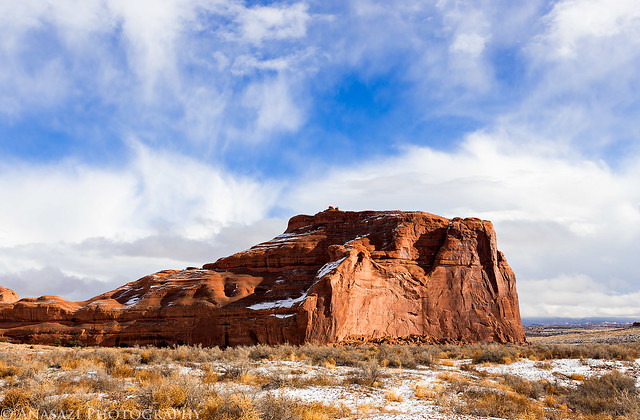 Diane on her way to Ring Arch. 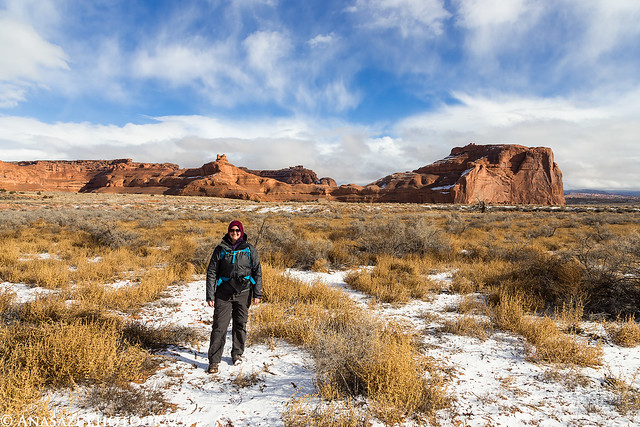 Some of the snow even start to melt in the direct sunlight. 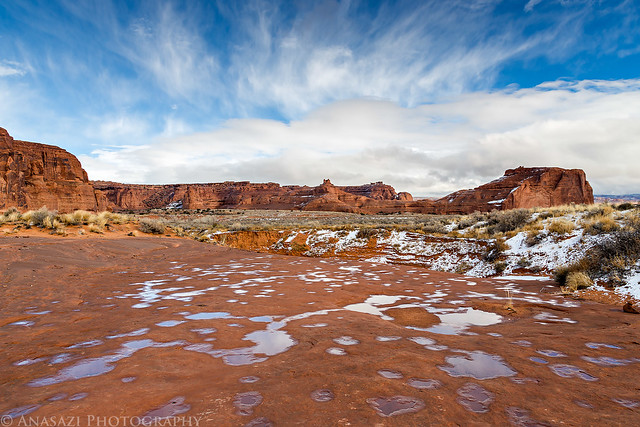 We climbed up to the base of Ring Arch for a closer view. 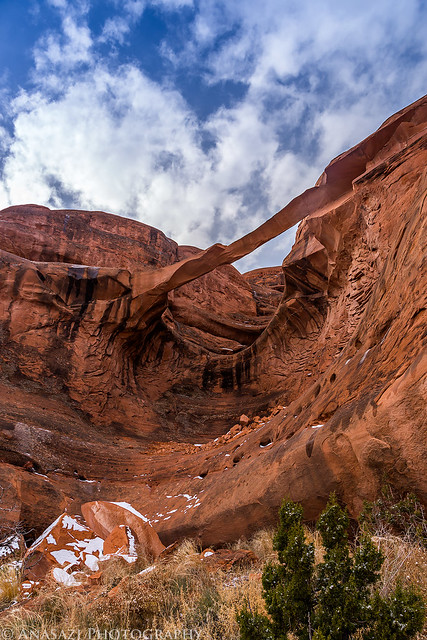 Here is a photo of Ring Arch from my 2012 Christmas trip. You can see that it lost a lot of rock. 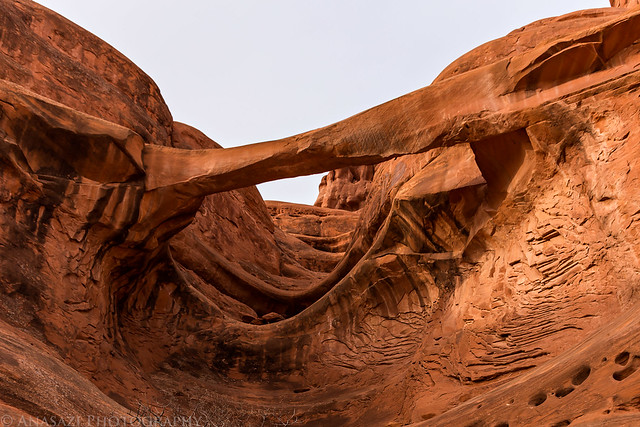 Overlooking Courthouse Wash from the base of Ring Arch. 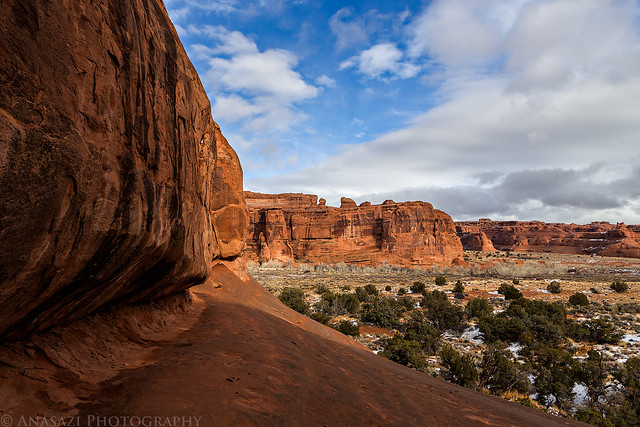 After visiting Ring Arch we hiked over to The Tunnel, but we were unable to climb up to it. The sandstone was a bit wet and we kept sliding back down as we tried to climb up to the opening. I guess we will have to try another time…

That’s the entrance to The Tunnel above the little mushroom rock. 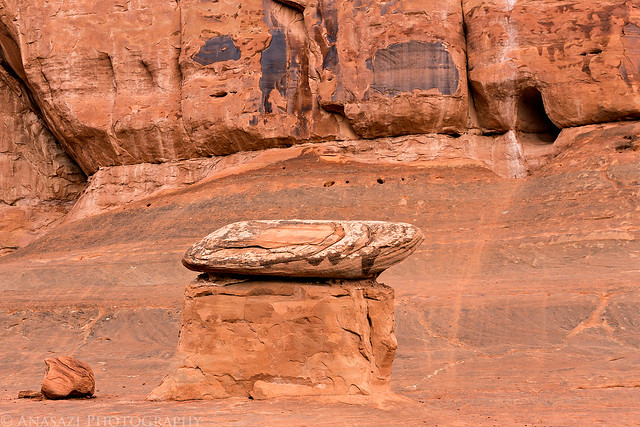 After hiking back to my Jeep, we left the park and made a quick visit to the Golf Course Petroglyph Panel since Diane hadn’t been there before and wanted to see the Moab Man and Santa’s Sleigh. 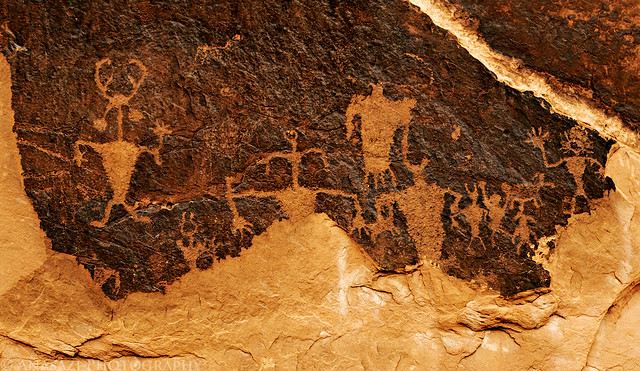 Before leaving town and driving back home we stopped and had dinner at Denny’s. It wasn’t my first choice for a Christmas dinner, but there really aren’t any other options open on Christmas Day in Moab. Luckily, most of the drive home was free of snow, but we did have to drive through a pretty good snowstorm from around Cisco to Westwater which made the roads slippery and slowed us down a bit. Overall, we had a pretty great Christmas!