Here’s a newspaper article about the mug I found earlier this year that was posted by the Kingman Daily Miner earlier this week. The full article can be found at the link below and I am including the complete text of the article just in case it ever disappears off of their website.

KINGMAN – People come from all over the world to view the scenery at the Arizona Strip, but one visitor was surprised by more than the beauty of the area when he stumbled upon a prehistoric artifact partially buried in the sand.

Colorado resident Randy Langstraat is an avid hiker who frequently finds rock art and runes, but he’s never come across anything like this before.

“This is the first time that I’ve actually stumbled across a mug, something I wasn’t expecting to find,” he said.

He frequents hiking destinations all over the Colorado Plateau, and the Arizona Strip is one of his favorite places to explore. When he came across the partially covered pot, he first thought it was a broken piece of pottery, which he always keeps an eye out for.

“And that’s when I started moving the sand around and noticed there was more than just a potsherd, so I pushed the sand away and found a complete pot,” Langstraat said. “It was pretty shocking to find.”

Not only was the pot, or mug as Langstraat described it, itself intact, the handle was as well.

“I’ve seen plenty of pots before, but I’ve never even heard of someone coming across a mug, let alone one with the handle intact with an animal effigy,” he said. “I could tell it was something old and something special.”

What does one do when finding something out of the ordinary, especially an item that could have archaeological significance? The proper course of action was displayed by Langstraat.

“I’ve been hiking for enjoyment for a while, and sometimes things disappear and it’s saddening when that happens,” Langstraat said. “That was a big reason I reported this one, because I didn’t want it to fall to the same fate.”

According to a BLM article written by archaeologist Sarah Page and public affairs officer Rachel Carnahan, Page, along with another archaeologist and law enforcement, were able to recover the pot thanks to Langstraat’s handling of the situation.

“Langstraat did the right thing by reporting the discovery of the pot to the BLM and by leaving it in place,” Page wrote in the article. “Just like Langstraat, everyone can help to protect our nation’s fascinating past.”

Most importantly, he didn’t take it home, relocate it or disturb it further. He buried it back in the sand where he found it, took photos and GPS coordinates of the location, and then contacted the Bureau of Land Management.

“They were pretty interested and excited to go recover it,” Langstraat said.

BLM discovered the artifact where Langstraat said it would be and found it in “near perfect condition,” Page and Carnahan wrote.

After further investigation and analysis, archaeologist David Van Alfen concluded the artifact is North Creek Corrugated, making it from the Late Pueblo II period around 1050 to 1250 A.D.

“The effigy handle appears to be that of an animal, possibly a deer or bighorn sheep,” Page and Carnahan wrote. “However, the ears or horns have been broken off making it difficult to determine precisely.”

So how can hikers increase their chances of finding artifacts? Langstraat has some fairly simple advice.

“My biggest recommendation is obviously to be safe, go prepared,” he said. “If you do find something, don’t take it. Either leave it where you found it, or if it’s something significant, report it to the BLM or whatever land management agency covers that area. And have fun, take photos.”

BLM intends to put the pot in display cases at the BLM visitor center in St. George, Utah. 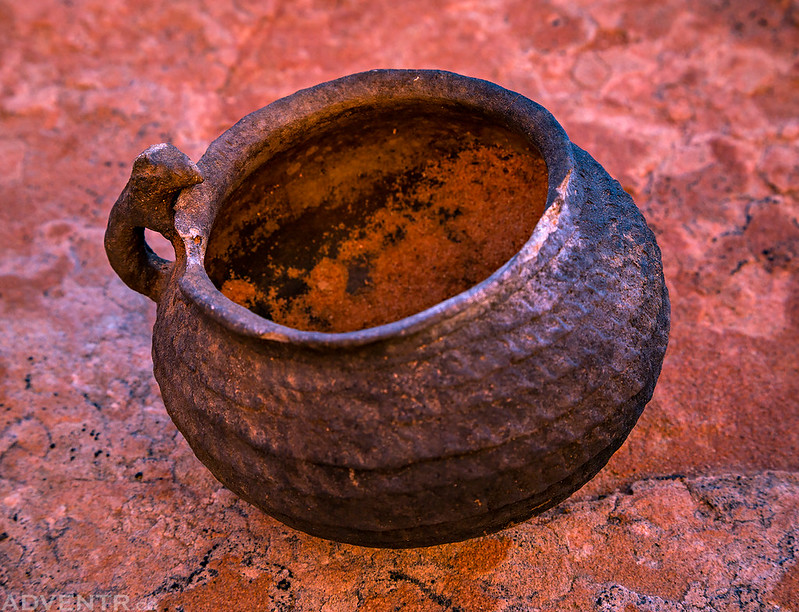