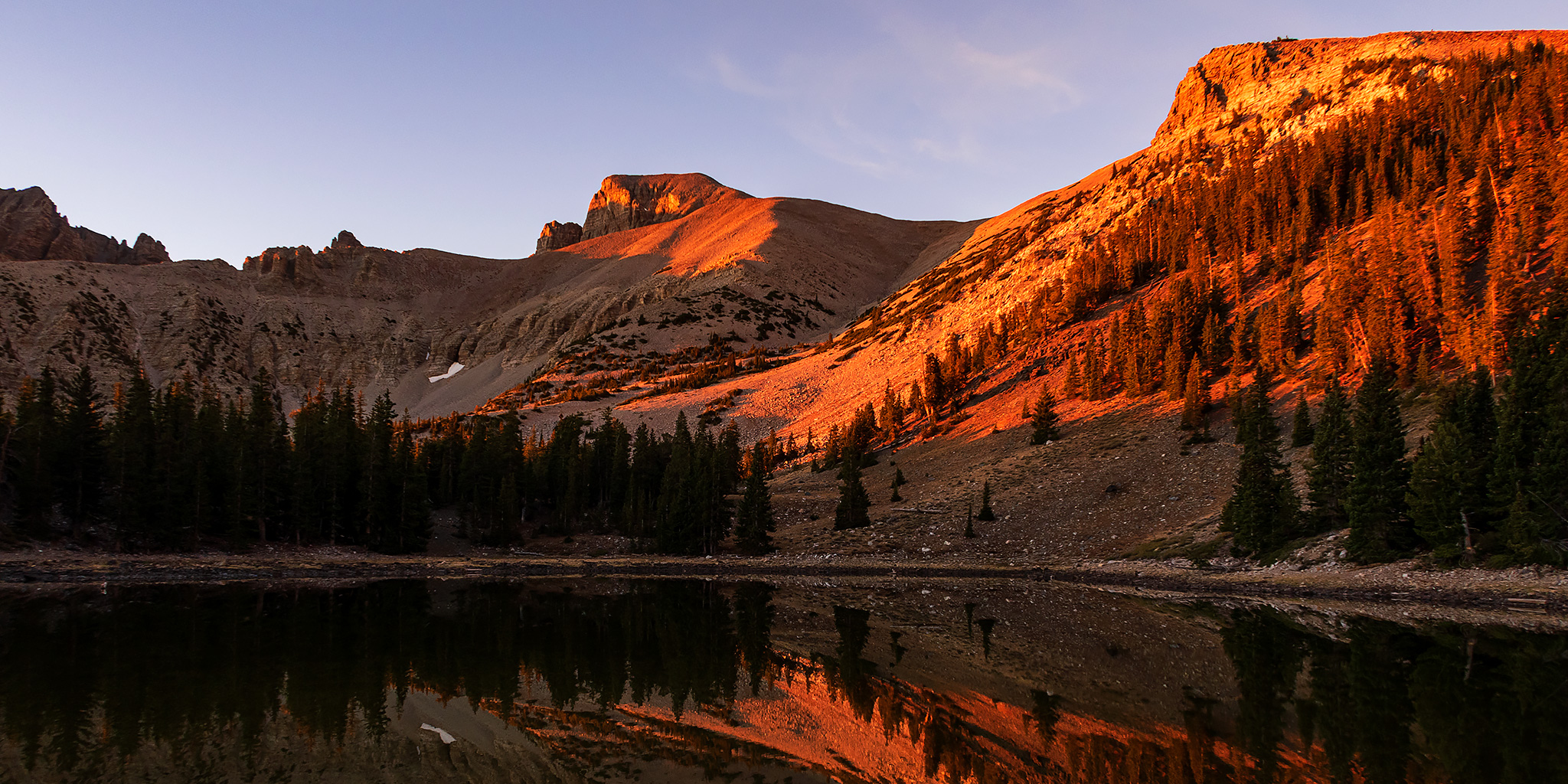 Across the Great Basin and Back | The Loneliest Road (Trip) in America
Tuesday & Wednesday, September 1-2, 2020

Last summer I got the idea in my head that I wanted to hike a couple of high peaks in Nevada and California over the Labor Day weekend and started putting together rough plans for a road trip that would take me Across the Great Basin and Back. Although many of my spring trips got cancelled because of COVID-19, I decided I was still going to go on this one since I would be alone and visiting more remote places during the week where I would not come into contact with a lot of other people. I mean, what better place is there to go for social distancing than by taking a road trip along one of the Loneliest Roads in America! For years I’ve wanted to visit Great Basin National Park to climb Wheeler Peak, so that’s where I decided to start this trip. Although many Nevadans consider Wheeler Peak to be the spiritual and symbolic highpoint of the state, the actual highest point in Nevada is Boundary Peak located near the western edge of the state. Whatever the status of the peak, all I knew is that I wanted to visit Great Basin National Park and hike to the summit for the view!

I left right after work on Tuesday afternoon and headed west on I-70 into Utah for the first time in a couple of months. While driving across the San Rafael Swell I was reminded just how much I am looking forward to exploring more of the Colorado Plateau again in just a few short weeks. As I drove along the lonely two-lane highway near the western end of the state, I was able to watch the sun setting in front of me and the moon rising behind me in my mirrors. When I crossed the state line into Nevada I gained an hour with the time zone change and topped off my gas tank at the small store located there. After driving through Baker and then towards Great Basin National Park, I found a rough 4×4 road just outside the park in Humboldt National Forest and found a place to camp for the night. It had been about six hours of driving since I left work and I was ready to get to sleep so I could get an early start on Wednesday morning.

I arrived at the shore of Stella Lake shortly before sunrise and decided to stick around for a little bit so I could watch the sun come up from here. 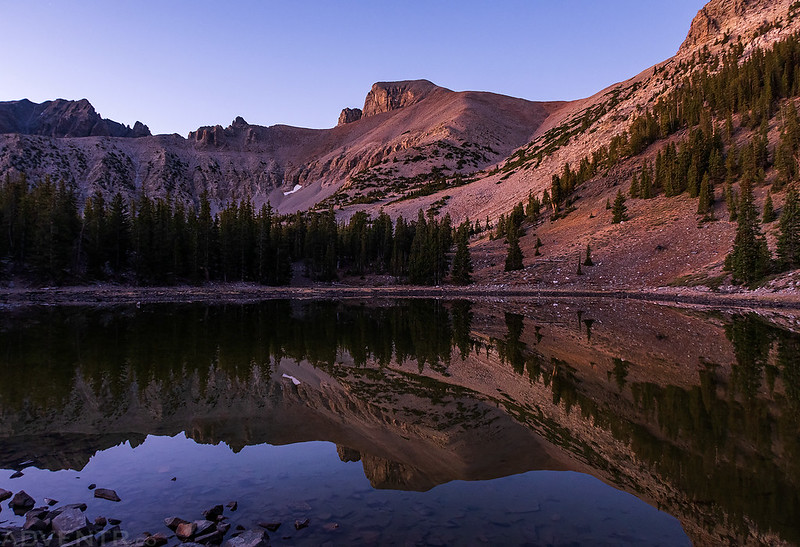 Since Great Basin National Park is not far from the Utah border and the time zone change, my phone was acting a little strange with the time since I was probably hitting a tower in Utah still. I thought I had got the time and alarm set correctly before I went to sleep, but apparently something got messed up and I had set the alarm for an hour later than I really wanted to. Luckily, I still managed to wake up on my own around 4:30am and realized my mistake, so I stayed awake and started driving up the Wheeler Peak Scenic Drive to the trailhead for the Wheeler Peak Summit Trail. When I arrived at the parking lot there was only one other vehicle there and it appeared to be there for an overnight trip, so it looked like I would be the first one on the trail this morning. I started hiking about 45 minutes before sunrise just as the eastern horizon was just beginning to glow orange behind me and the full moon was setting in front of me with plenty of stars still visible in the sky above. It was a beautiful morning. The first mile or so was very easy without much elevation change, and when I reached the junction in the trail that went over to Stella Lake, I decided to follow the short spur to watch the sunrise from there. 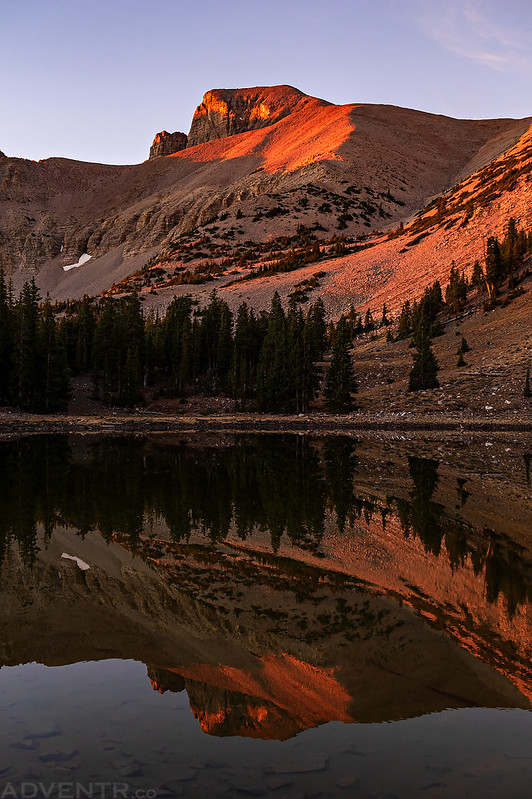 The first light of the day strikes Wheeler Peak. The light was very red this morning from a layer of smoke on the horizon. 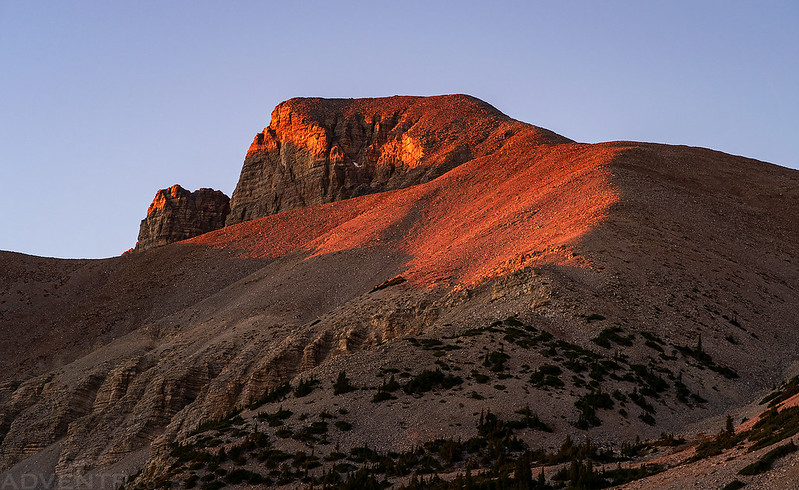 I’m glad I stuck around for a little bit to watch the sunrise from here before continuing up the trail. 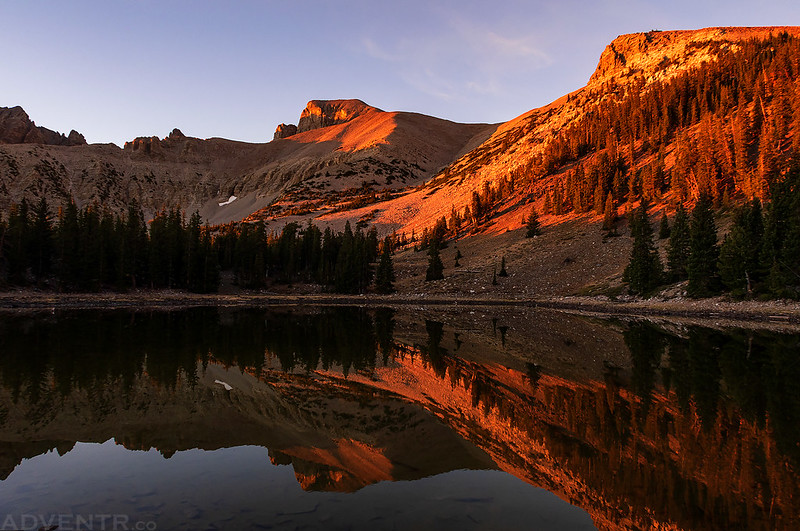 Once I started hiking up the trail again I had a good view over the Snake Valley below. 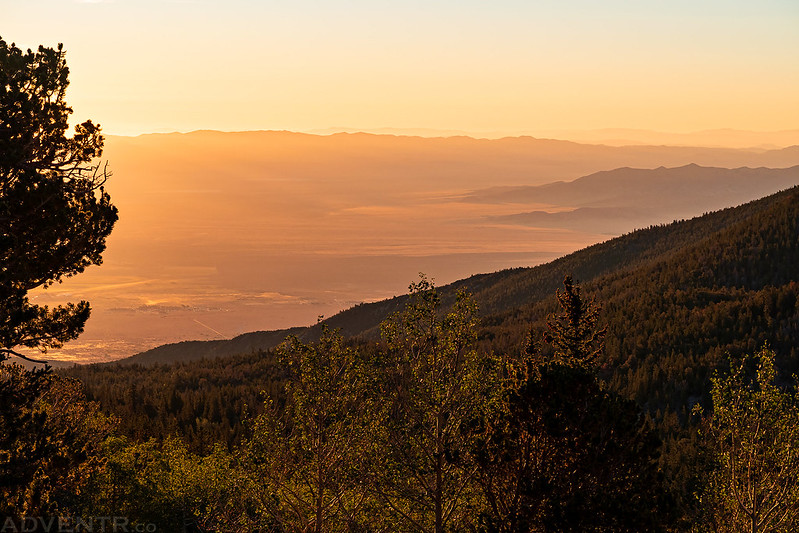 After leaving the lake I continued to follow the Wheeler Peak Summit Trail and saw a bunch of deer foraging nearby. Can you see the two deer off to the left of the trail? The light was very golden-colored this morning while it was shining through the layer of smoke on the horizon. 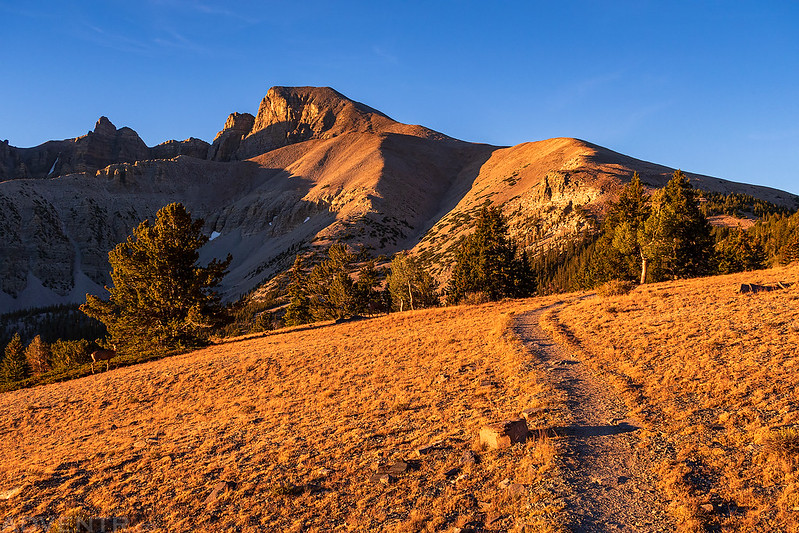 Here’s a closer look at one of the deer. Most of them kept their heads down and seemed to be more concerned with eating breakfast than with me walking by. 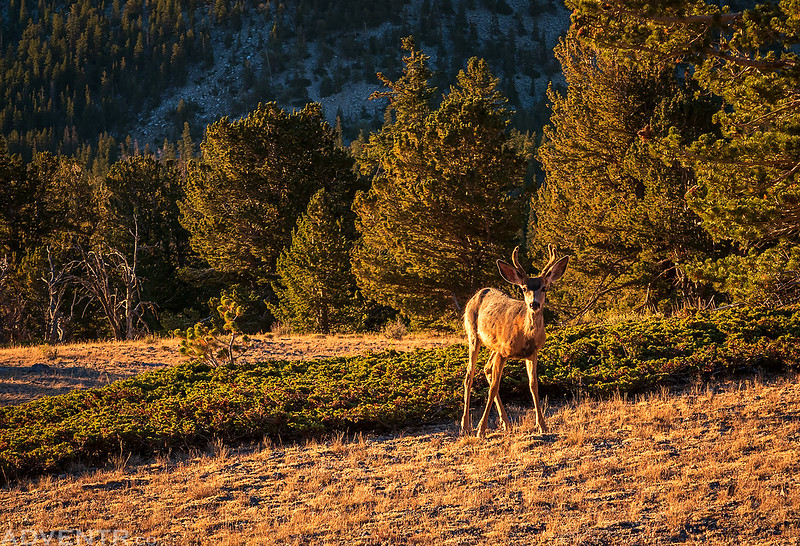 I had a good look at the ridge I would be following up to the summit of Wheeler Peak as soon as I got out of the trees. 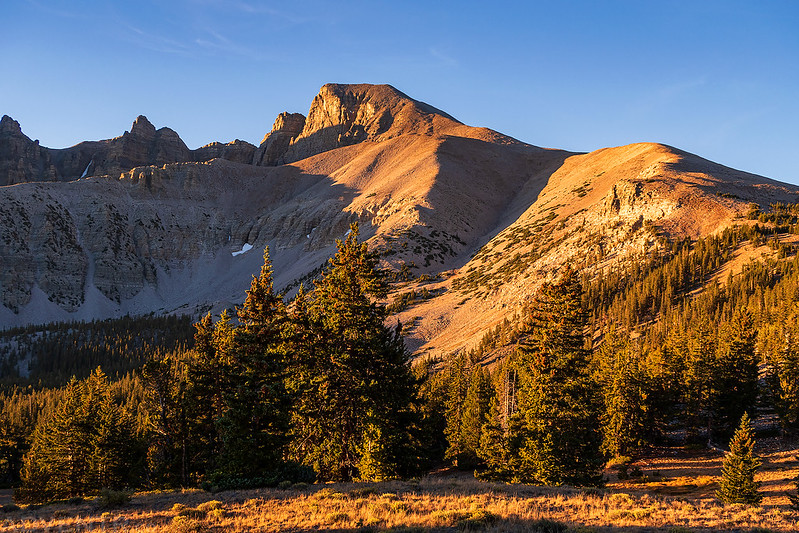 Following the easy trail to the saddle between Wheeler Peak and Bald Mountain. 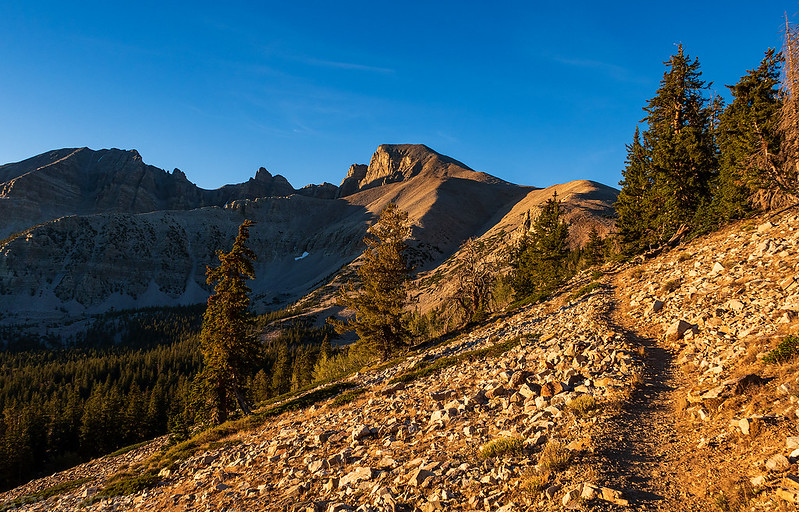 Looking back to Bald Mountain (11,562) from just above the saddle. 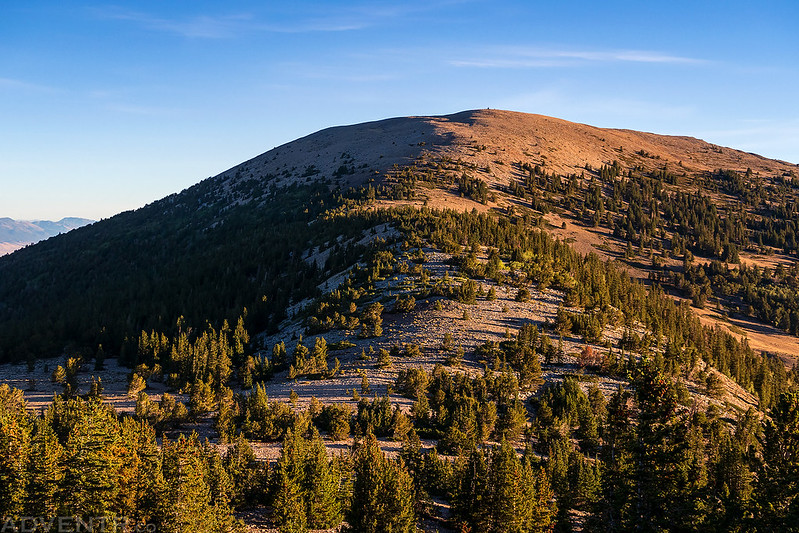 Ready to climb the rocky ridge to the summit. Although you can’t really see it, there is a pretty good trail all the way to the top. 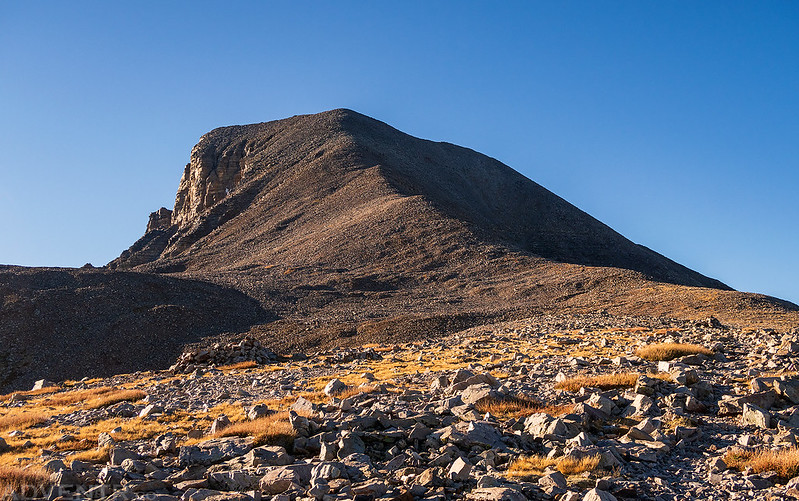 As soon as I reached the top of ridge just below the summit, I had a good view of Baker Peak (12,298) and the rest of the Snake Range to the south. 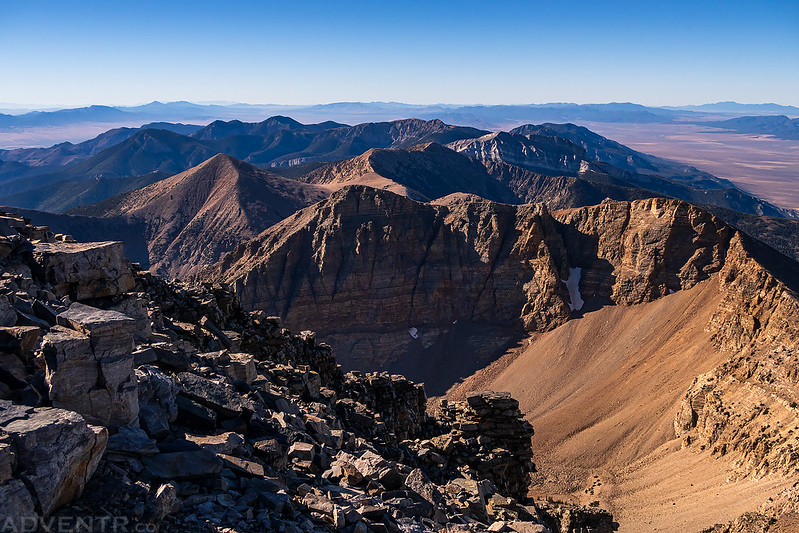 Looking back to the summit of Wheeler Peak as I walked past it for a closer look at Jeff Davis Peak, which is now known as Doso Doyabi. Last year Jeff Davis Peak was officially renamed to Doso Doyabi, it’s original Shoshone name. 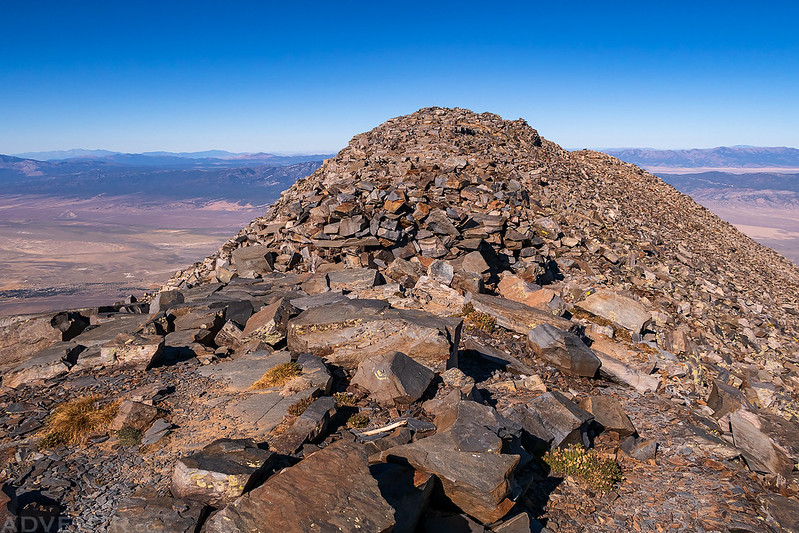 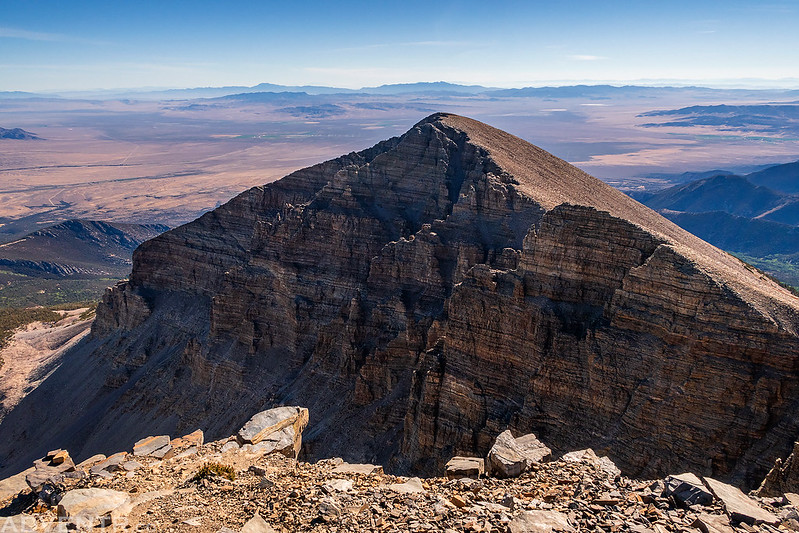 I liked the texture and light on the northwest face of Doso Doyabi. 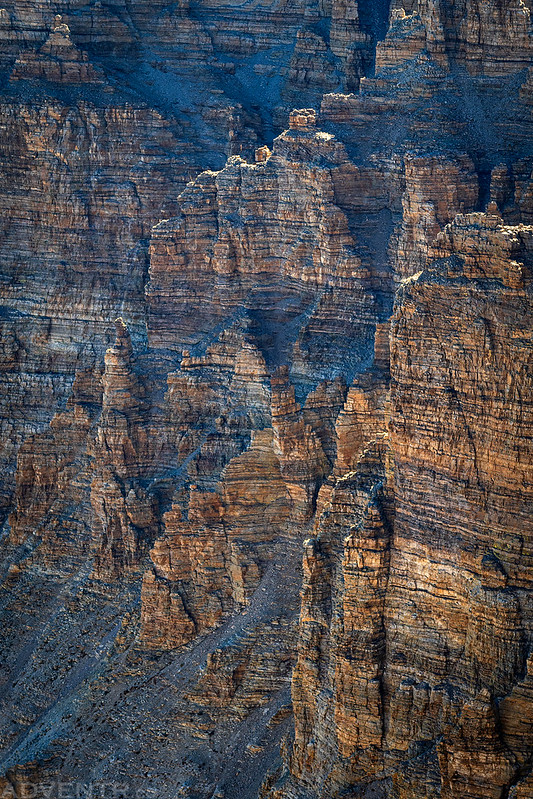 Looking down to Stella Lake and Bald Mountain. 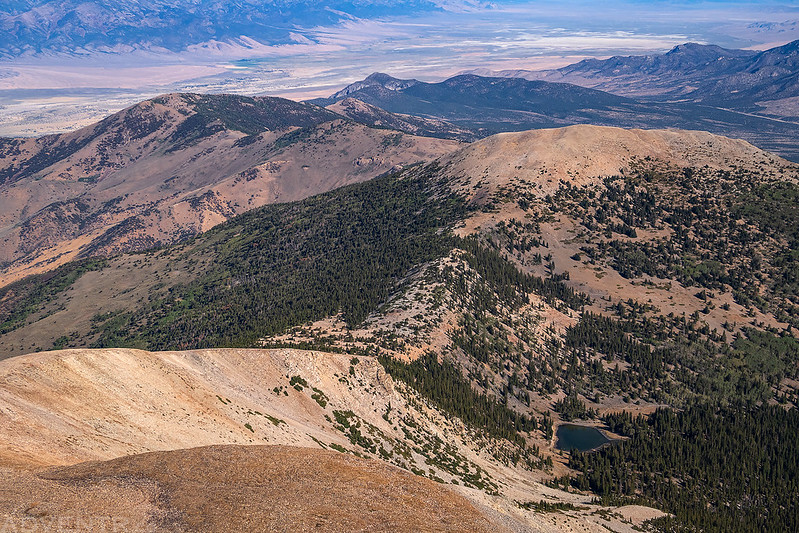 The view from the summit of Wheeler Peak was pretty nice, although I wish it hadn’t been so smoky and hazy out this morning. 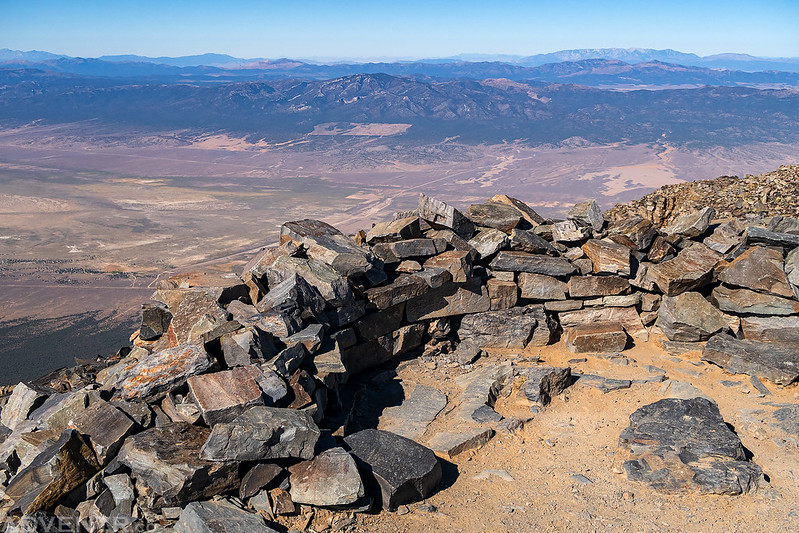 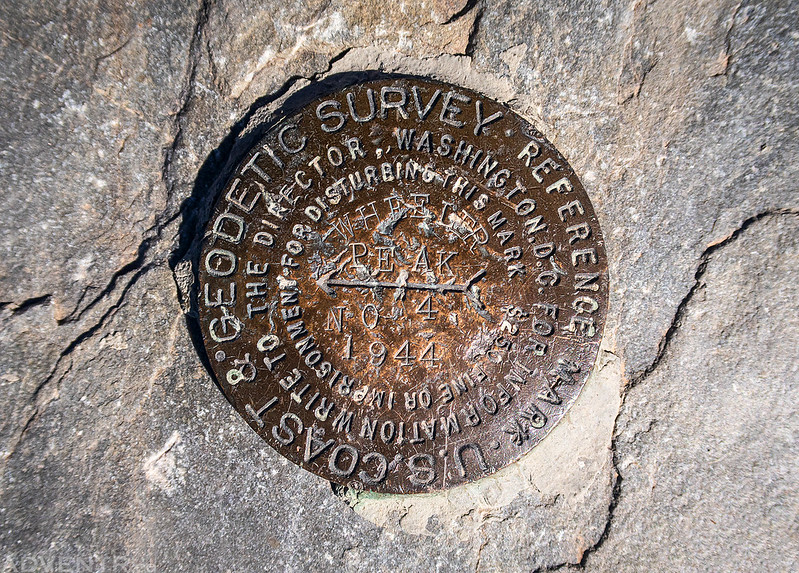 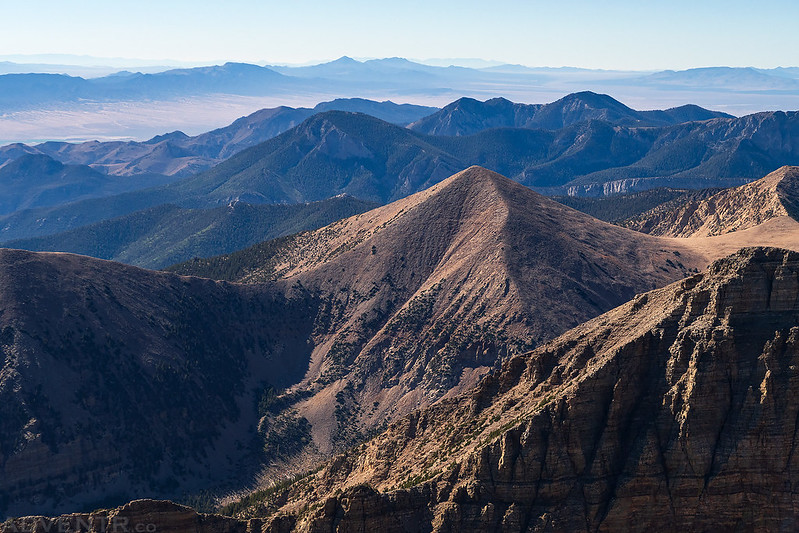 Even though the views were smoky and hazy this morning, I always enjoy seeing the distant ranges of the Great Basin from a high point. 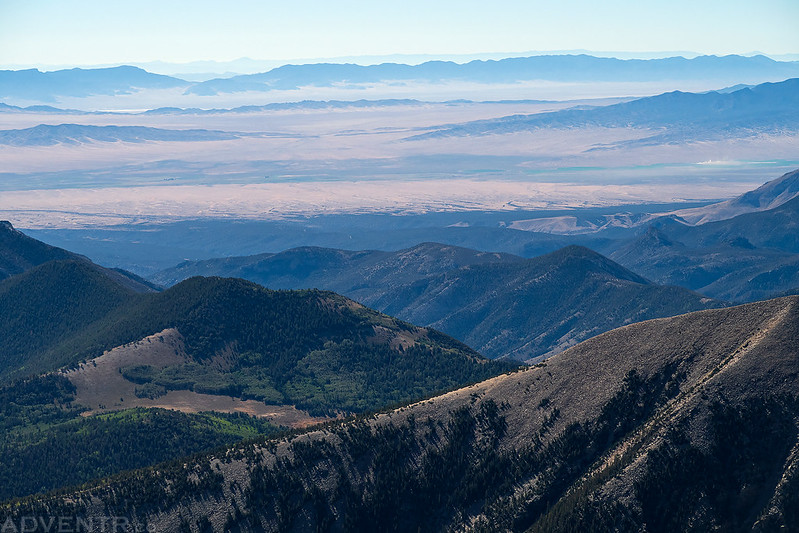 Looking over Bald Mountain and Buck Mountain (10,972) to the northern part of the Snake Range. You can see parts of the Wheeler Peak Scenic Drive below. 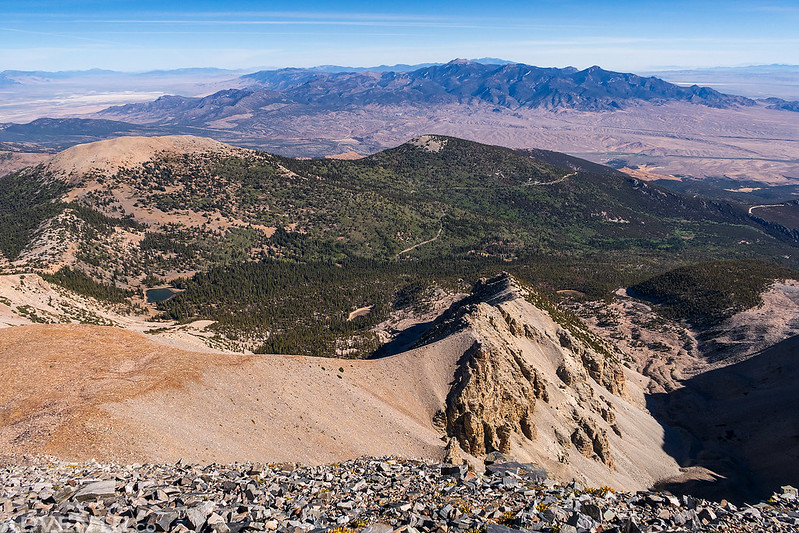 Ready to start hiking back down after having the summit to myself for a while. 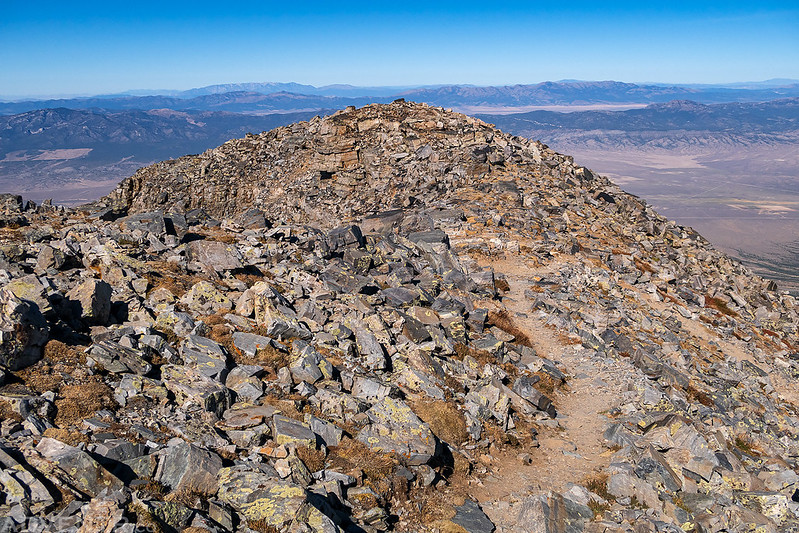 Following the rocky ridge back down to the saddle. In the distance you can see a large wind farm in Spring Valley. 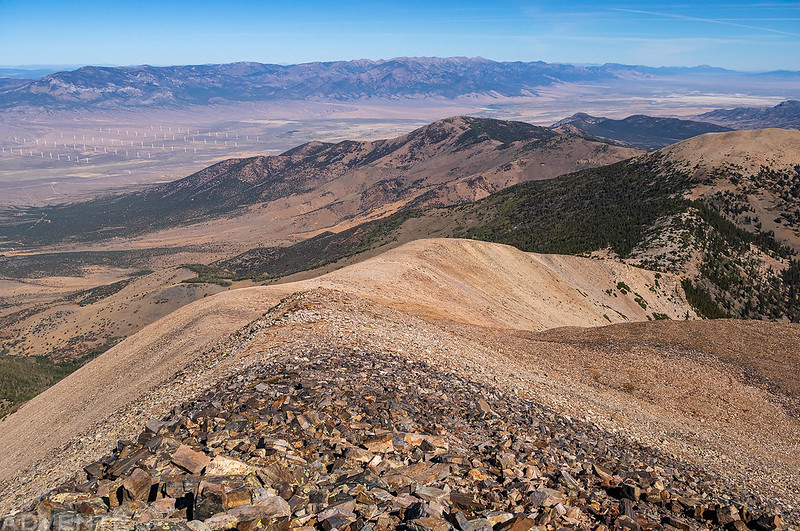 The hike back down was pretty quick for me and I was back to my Jeep in just over an hour and a half. During the descent I passed about a dozen other hikers who were on their way up to the summit. This was actually one of the easier peaks I’ve hiked in a while. I’m not sure if that’s because there was a good trail with a gentle grade for most of the hike or that I’m actually finally getting into better shape again! Probably the former. Before leaving the park I finished driving to the end of the Scenic Drive and then headed back down. It was nice to see the drive in the light this time.

Before finishing the drive back down I made a quick stop at the Wheeler Peak Overlook which was right along the road for one last view of Wheeler Peak. 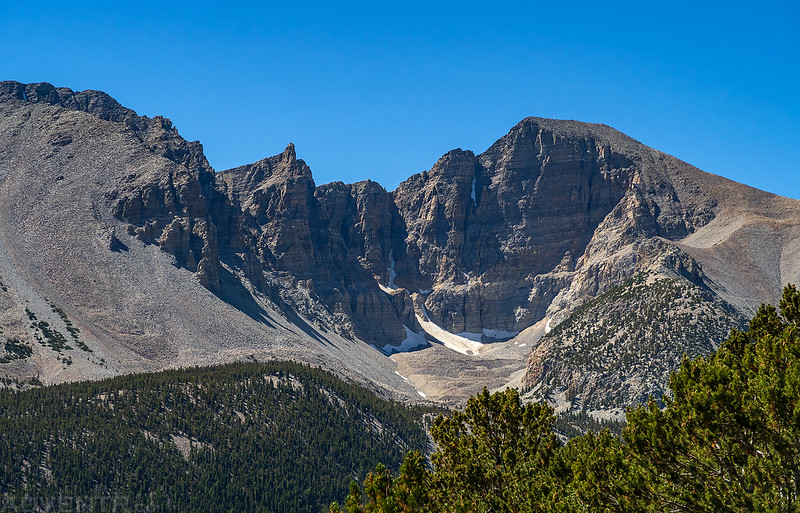 Leaving Great Basin National Park. I look forward to returning again in the future so I can explore other parts of the park! 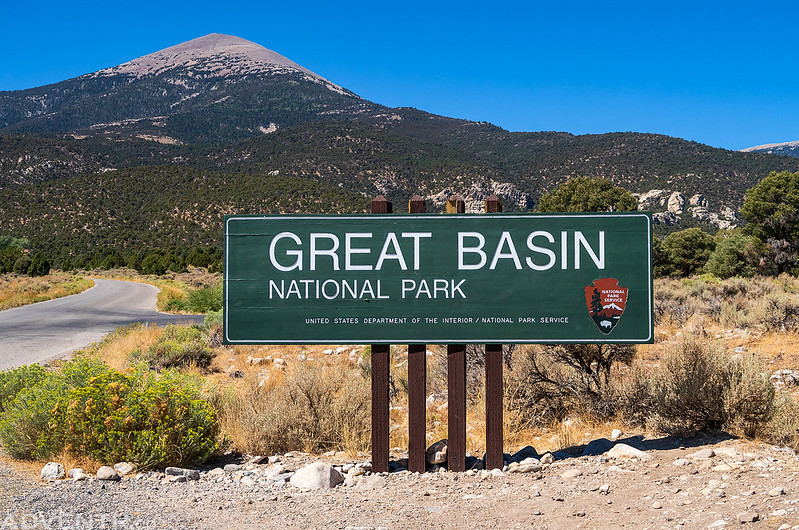 After leaving the park I continued along US Route 50 to Ely where I grabbed some lunch and topped off my fuel tank for the next leg of the drive across Nevada. From Ely I would be leaving US 50 and taking US Route 6 the rest of the way. Although US 6 isn’t officially known as the Loneliest Highway in America, I would bet that it’s equally deserving of that title, if not more so than US 50. I would be following this two-lane highway across the Great Basin to the White Mountains in California, where I planned to hike my next peak in the morning.