After dropping down into the upper reaches of Big Horn Canyon, we followed the shallow wash as it got deeper and more colorful. 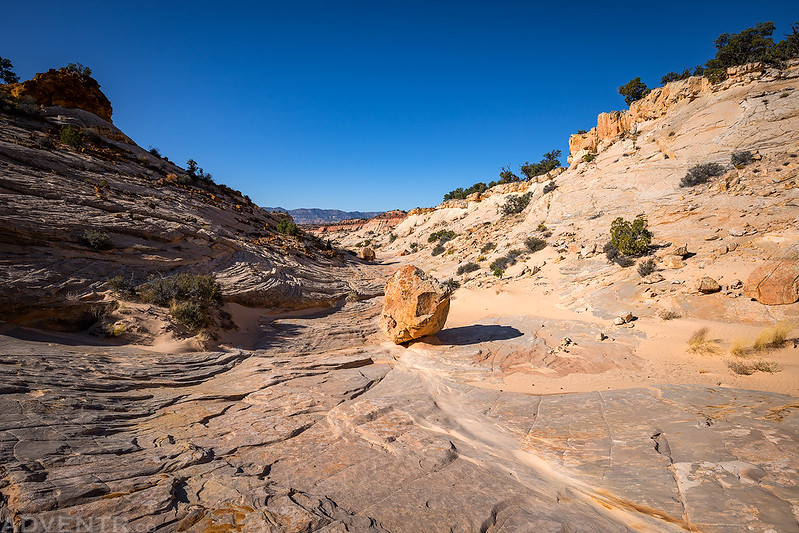 The hiking alternated between slickrock and soft sand. There was a lot of soft sand, so we tried to stick to the sandstone when we could. 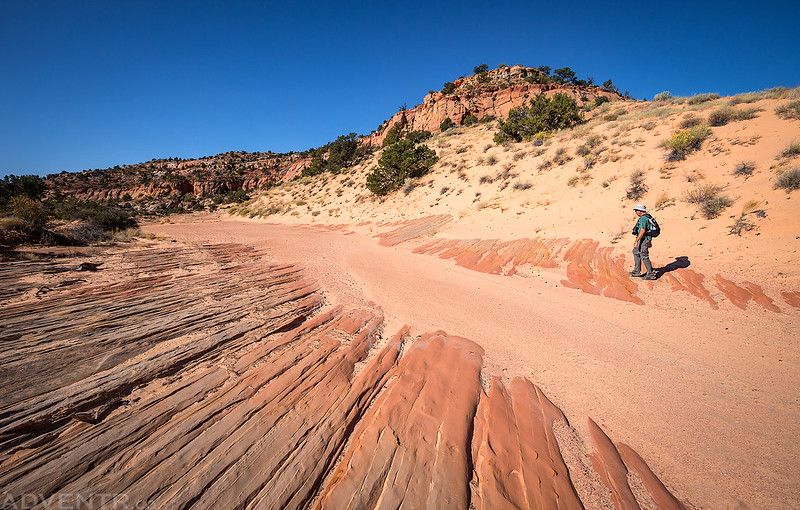 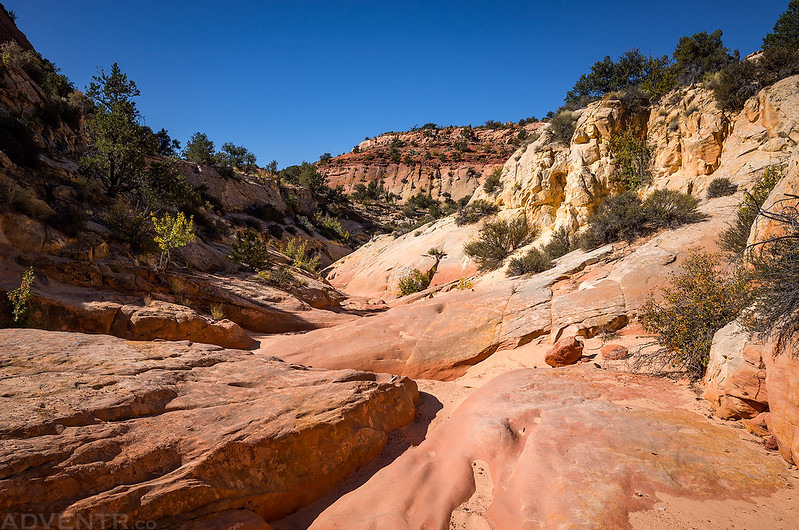 After a little over two miles we finally reached our first slot canyon. It was shallow, but the colors were nice. 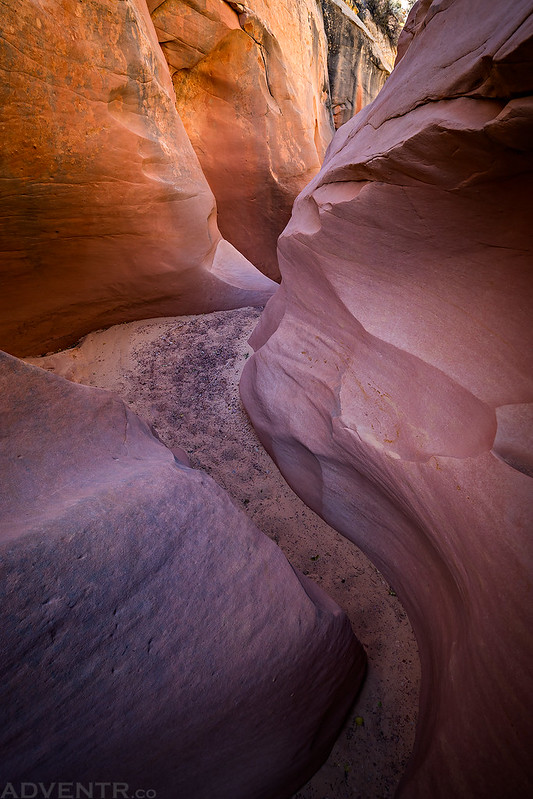 We weren’t able to hike through the slot very far when we reached the first big drop. It was a little too much for us to descend, so we decided to climb out of the slot and find a way around it. 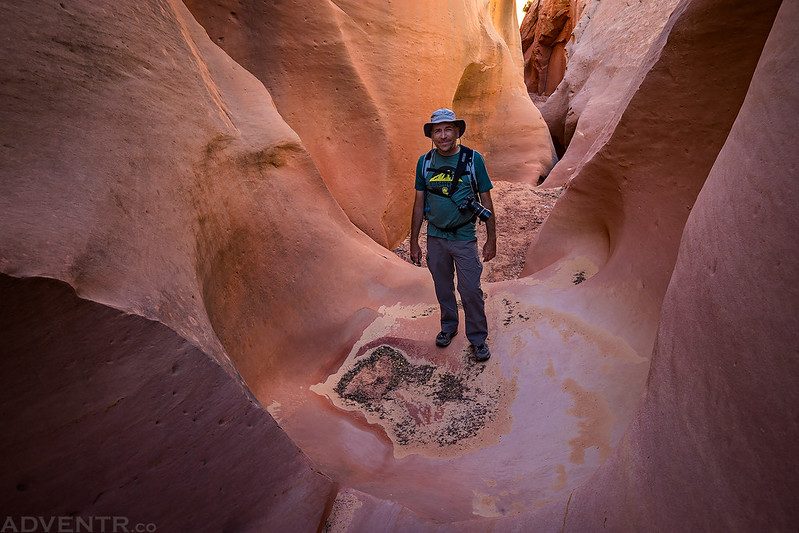 We followed a well-used social trail above the slot canyon for a little bit, but then it abruptly ended and cliffed out. We could not find a way down into the canyon from here and thought about giving up on the hike at this point. 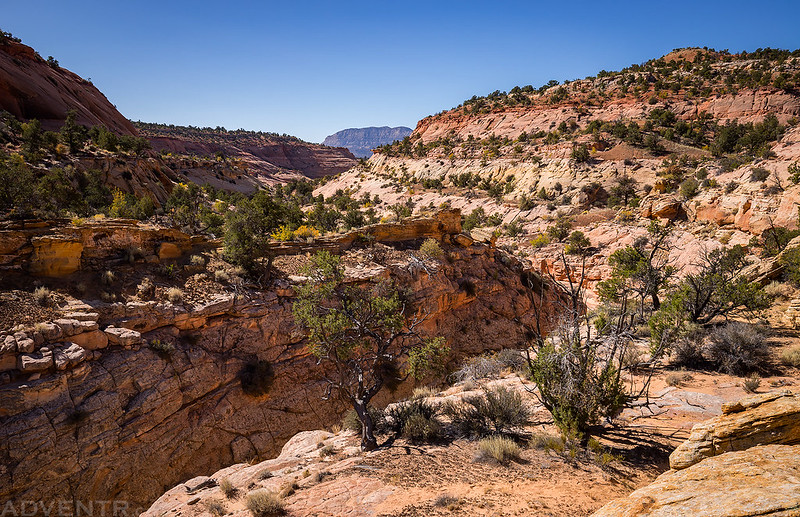 Instead of giving up on reaching the lower slots the canyon, we decided to hike back up to my Jeep and drive around to the Hole-In-The-Rock Road. We parked near Tenmile Spring and were then able to hike up Harris Wash to the mouth of Big Horn Canyon so we could explore the lower part of the canyon from the bottom.

After hiking up the mouth of Big Horn Canyon a short distance we decided explore the West Fork first. If all that sand and gravel was removed, maybe there would be another wave underneath… 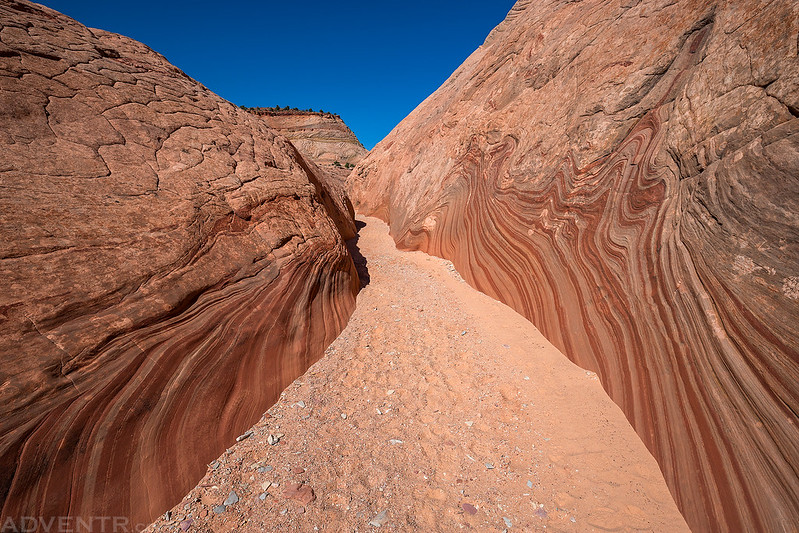 The West Fork definitely had the nicest slot canyon we would visit today, even if it wasn’t very long. 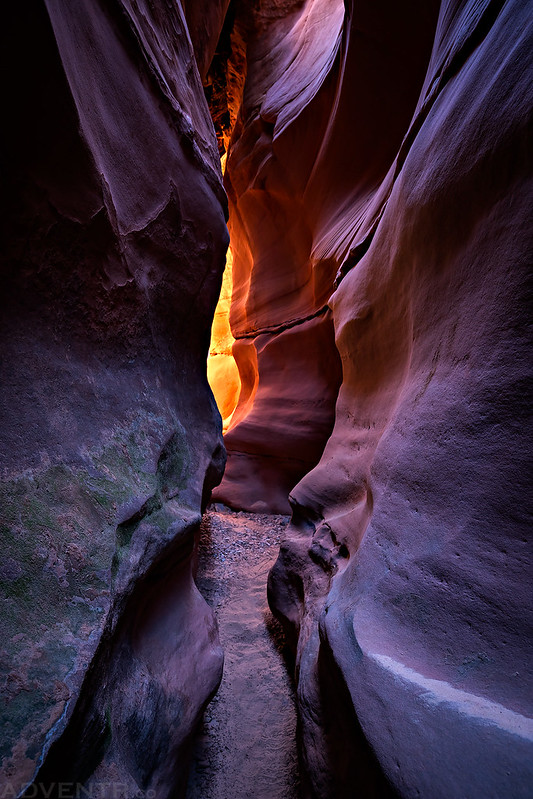 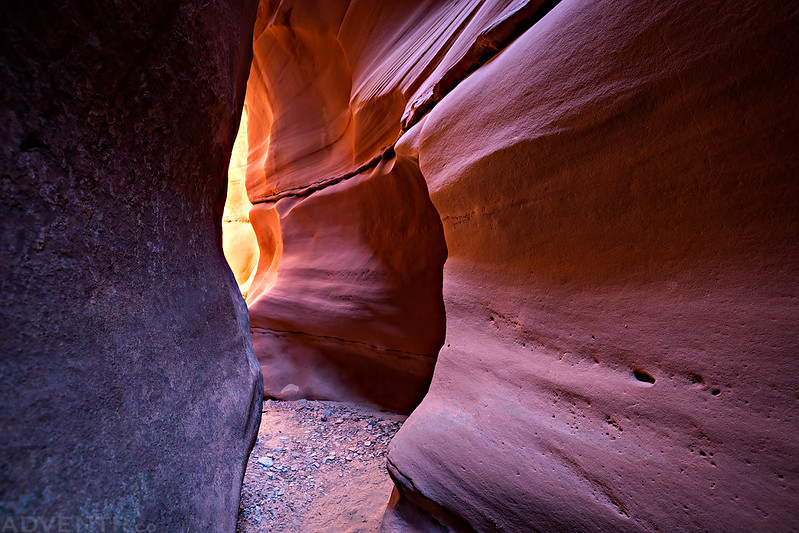 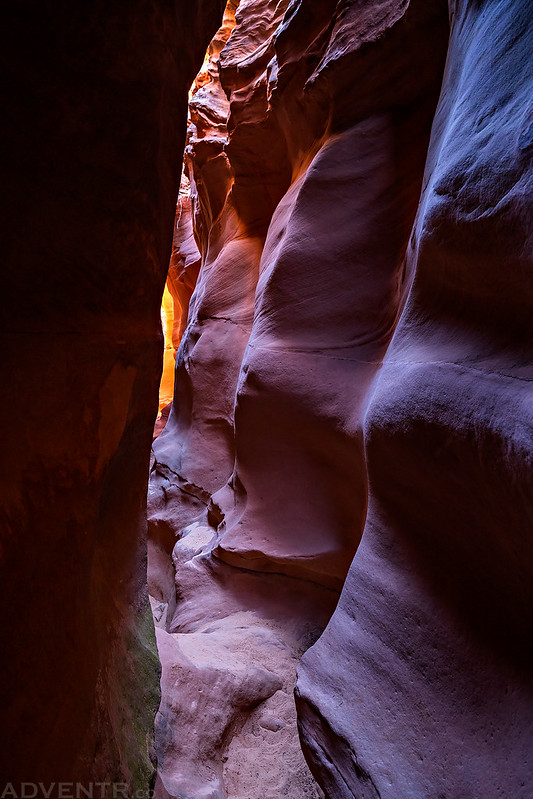 This was the end of the West Fork slot canyon for us. Around this last bend it got really narrow and ended at a dryfall. 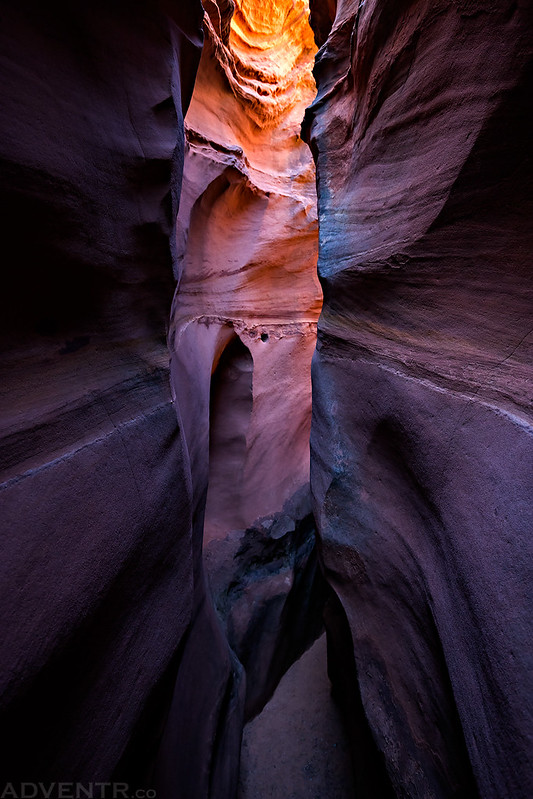 Next we returned to the main fork of the canyon and hiked up the long stretches of colorful, but shallow slots. 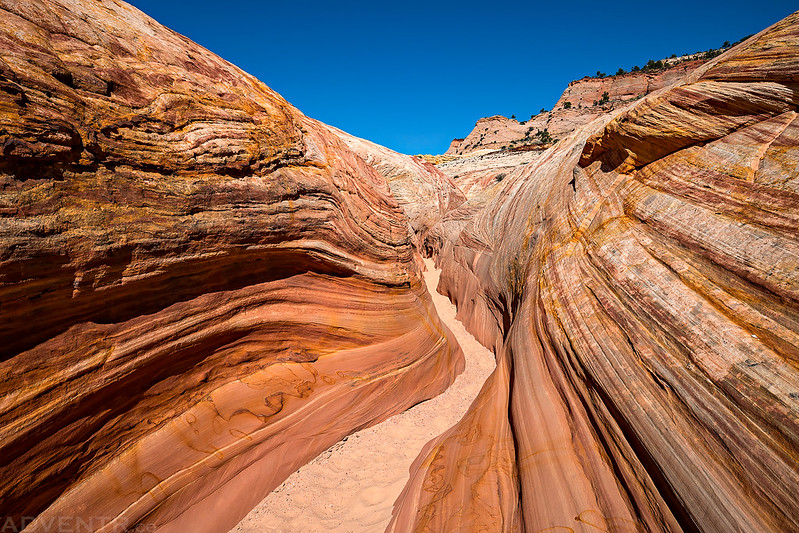 A swirl in the sandstone. 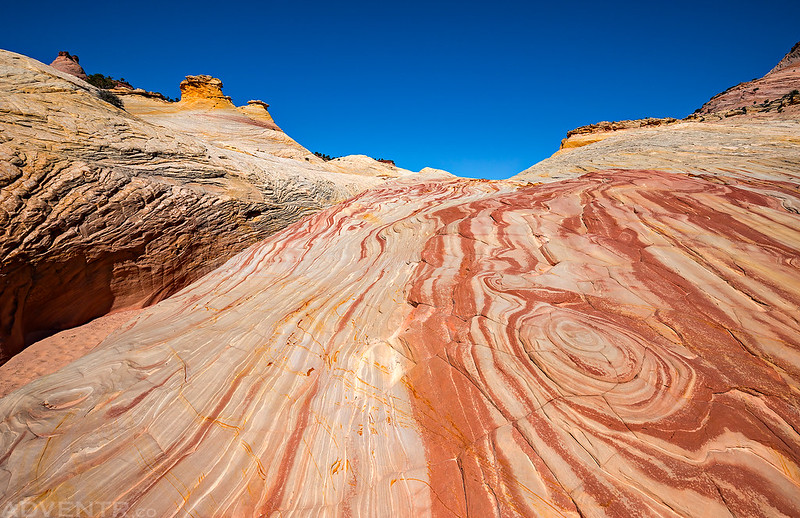 Walking through the shallow canyon bottom. 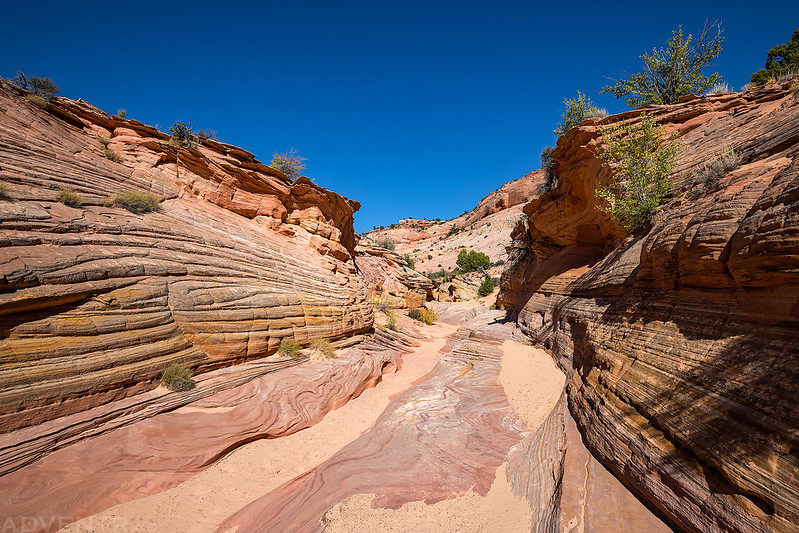 I caught this sunstar in the last section of narrows we hiked into. 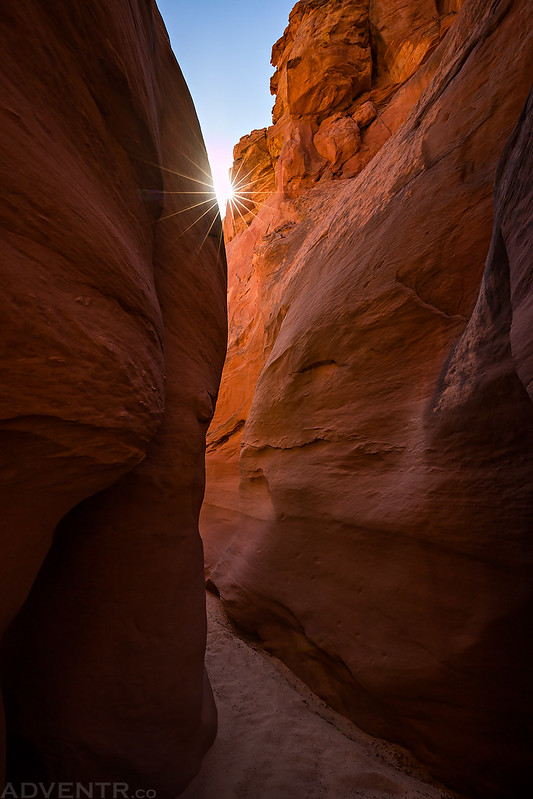 Jared stands in the final chamber we entered before we were stopped by another large dryfall. This is as far as we would hike up the main fork of the canyon and it wasn’t too far away from where we had turned around earlier in the day. 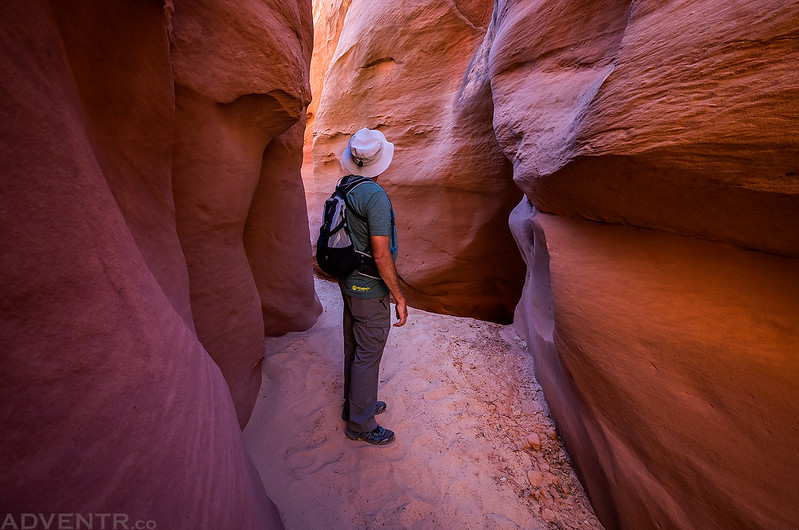 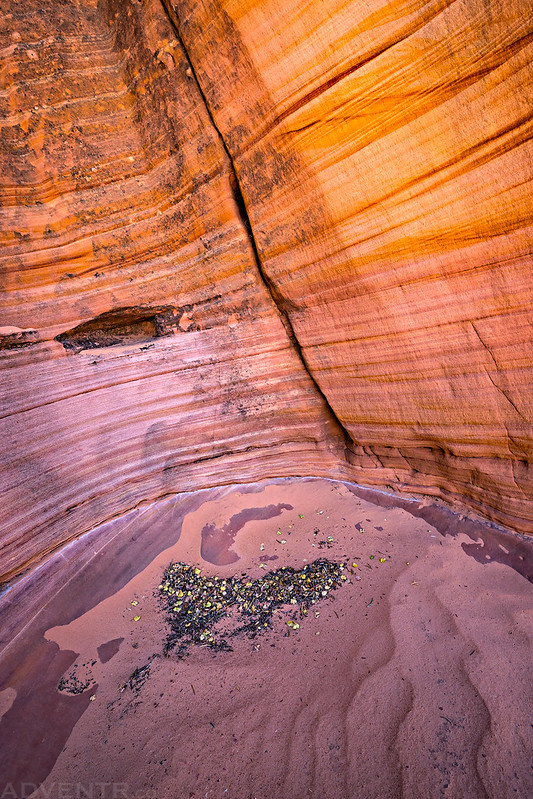 On our hike back out of the canyon we stayed out the slots so we could explore the colorful sandstone found above. 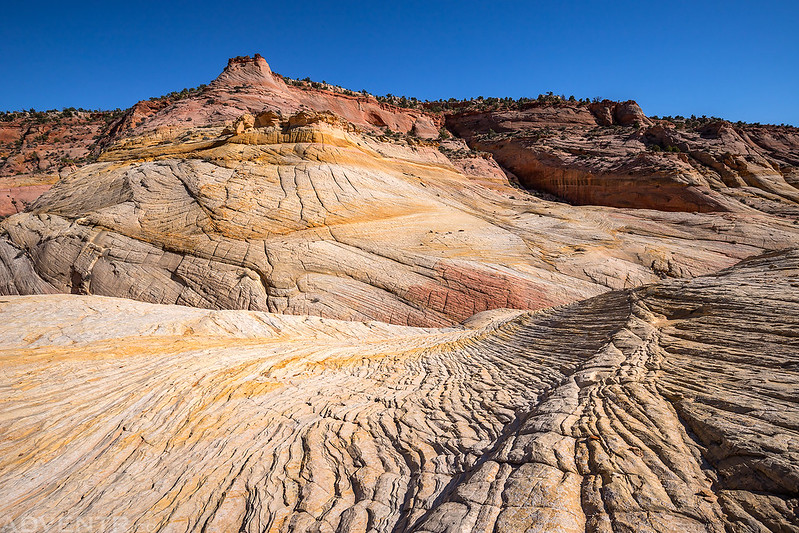 While hiking through the shallow slot canyon a little earlier I had come around a bend and ran into a guy with two goats. That was a new one for me! It turns out that he and his wife are goatpackers from Colorado and they were out exploring the area. We ran into them again on our way back so I stopped and took a photo of one of their goats. 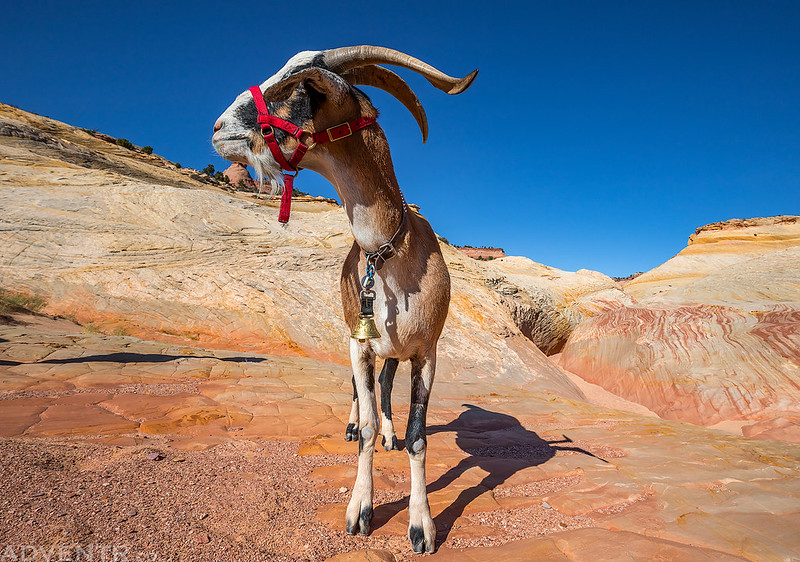 Wandering around the colorful sandstone in Big Horn Canyon kind of reminded me of exploring Coyote Buttes North. 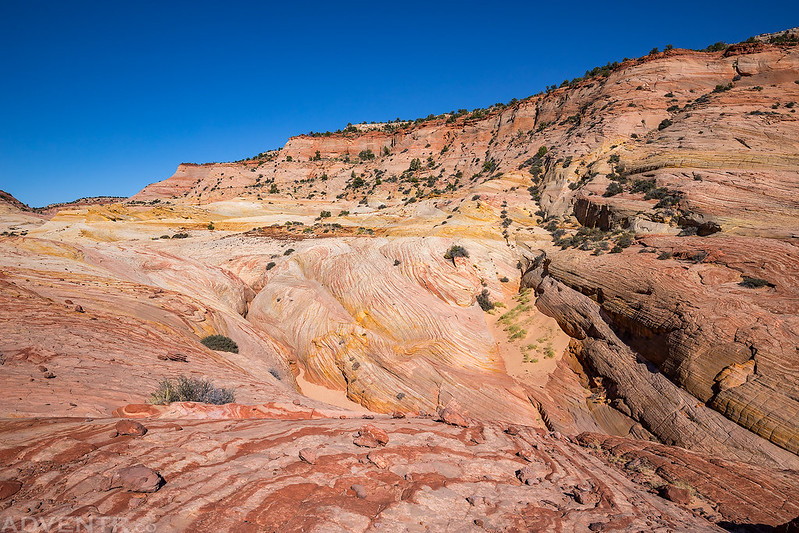 After returning to my Jeep at the trailhead we decided to head back into Escalante for dinner since we were nearby. Afterwards we headed back to Boulder and topped off the fuel tank in my Jeep before we headed out on the Burr Trail to the Wolverine Loop Road. We found a campsite in the dark near the trailhead for Little Death Hollow, which was the next loop we planned to backpack starting in the morning.