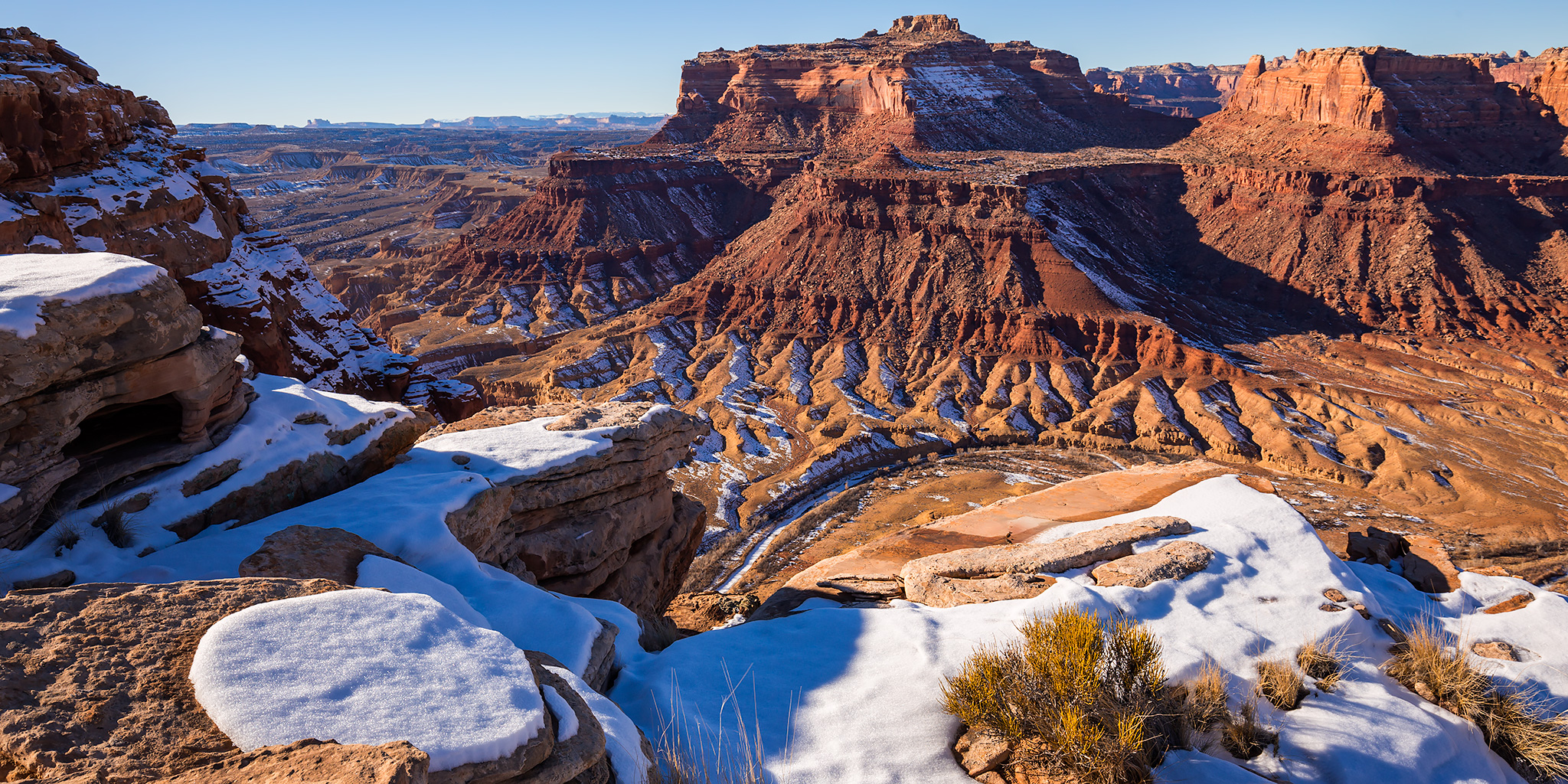 This was some of the thickest fog I have ever driven through and I had to slow down quite a bit since I couldn’t see very far ahead. 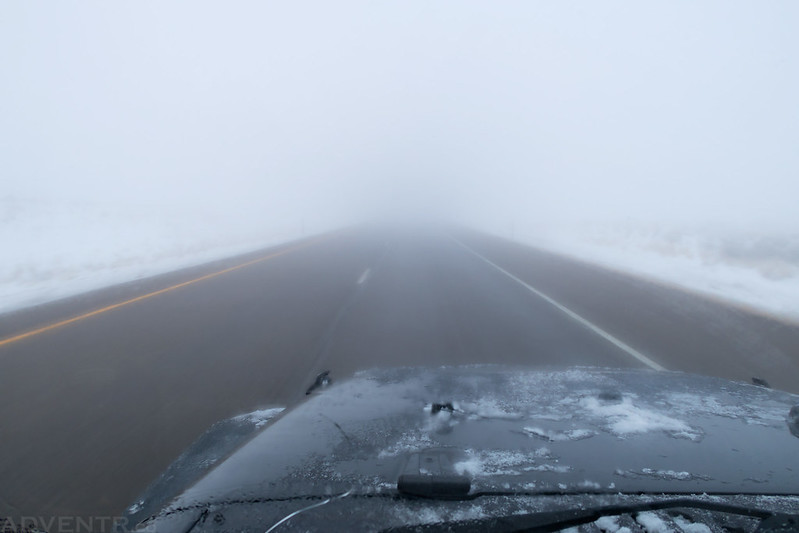 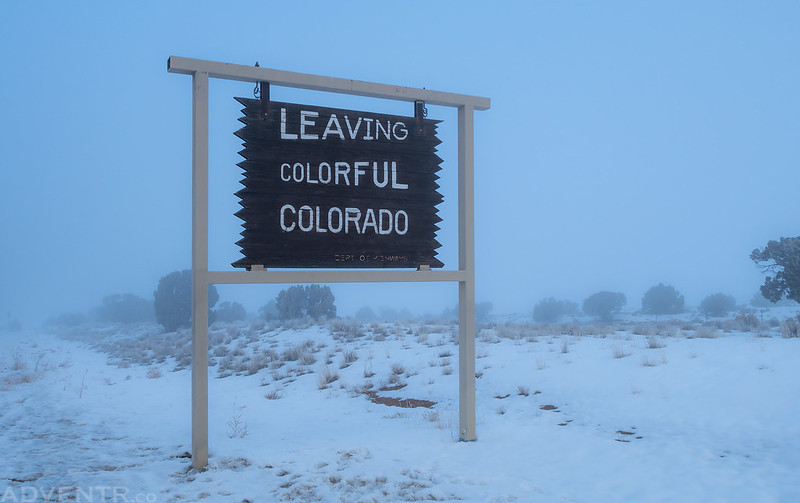 My original plan for the day was to hike up Cave Canyon to an overlook at the top of the San Rafael Reef and then hike down Arch Tower Canyon to create an 8 mile loop. Unfortunately, as I tried to hike up Cave Canyon I ran into a dryfall that was covered with snow which prevented me from going any further, even with microspikes. I ended up changing plans and hiking up a smaller canyon to the north and then finding a way back into Cave Canyon above the dryfall so I could visit the large cave located there. After visiting the cave I tried to continue up the canyon again and was stopped by an even taller dryfall, so I returned to the smaller canyon to the north and followed it all the way to the top of the reef. There was a great view over the San Rafael River to Mexican Mountain from up there!

Before starting the hike I stopped to revisit a few pictographs that I found last year. 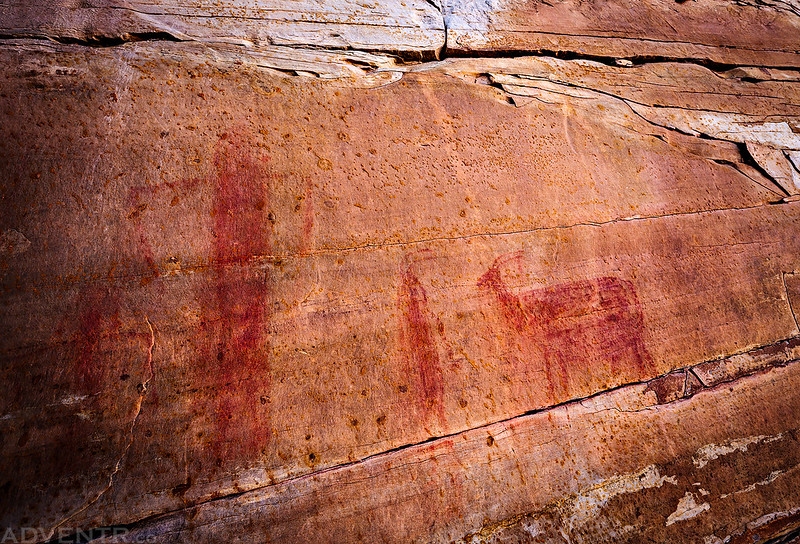 There was plenty of snow in the shaded parts of Cave Canyon. 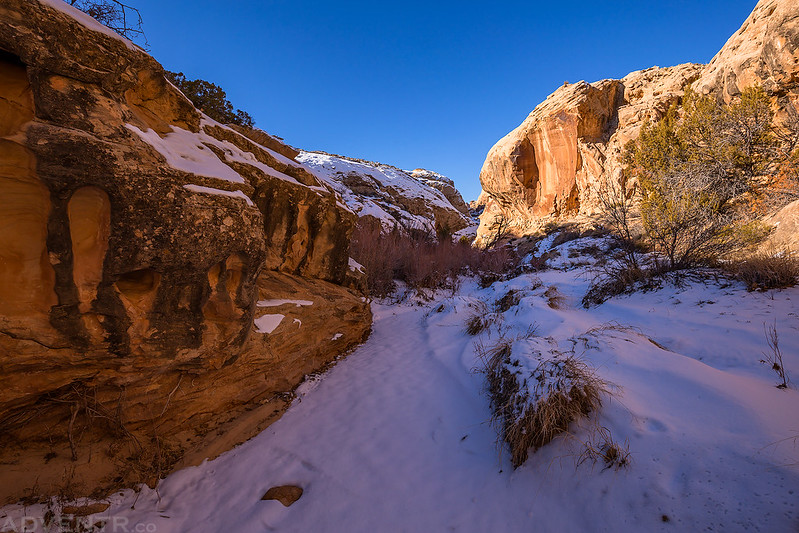 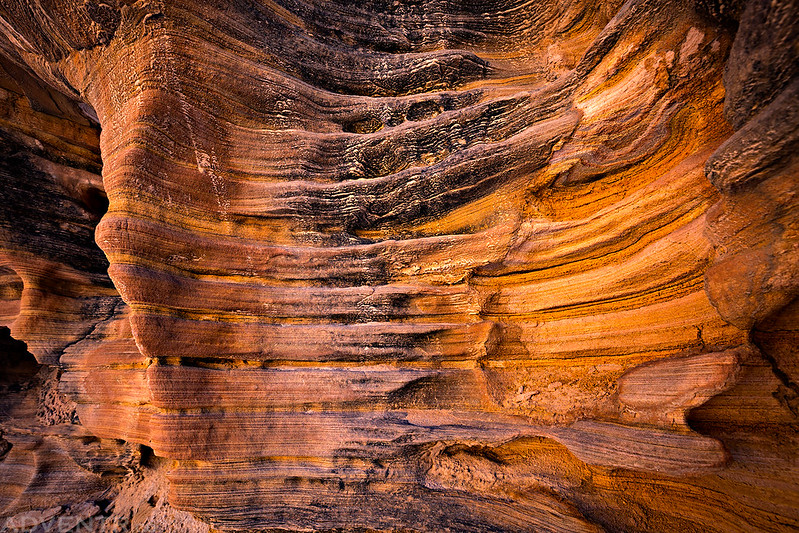 This was the first dryfall that stopped me. I backtracked down the canyon a little ways and found a spot to climb over into the next canyon to the north. 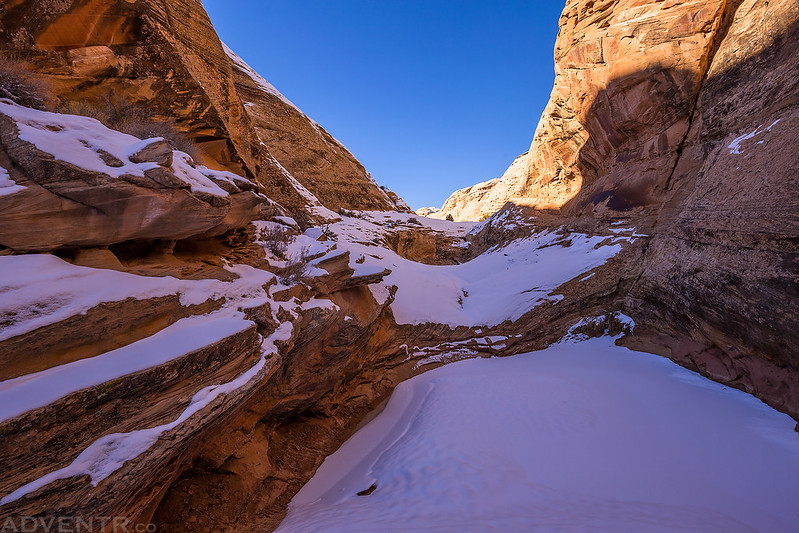 Up on the divide between the two canyons. Cave Canyon is on the left. 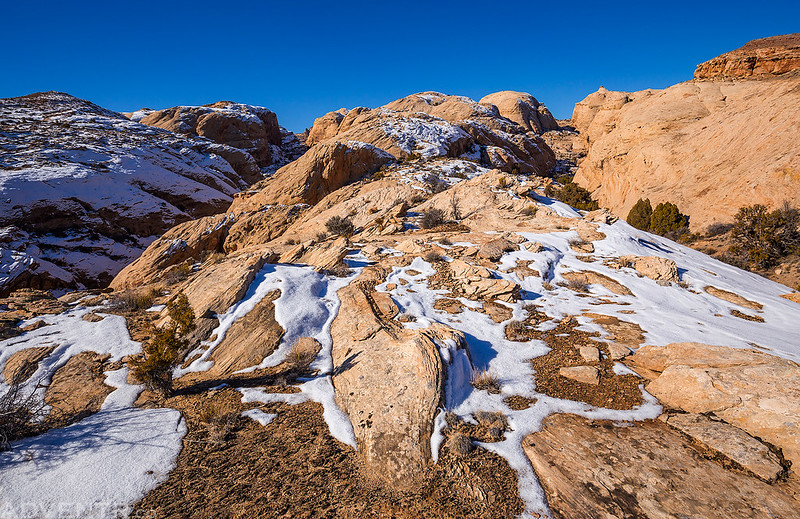 As I hiked up this canyon I found this short little slot canyon. 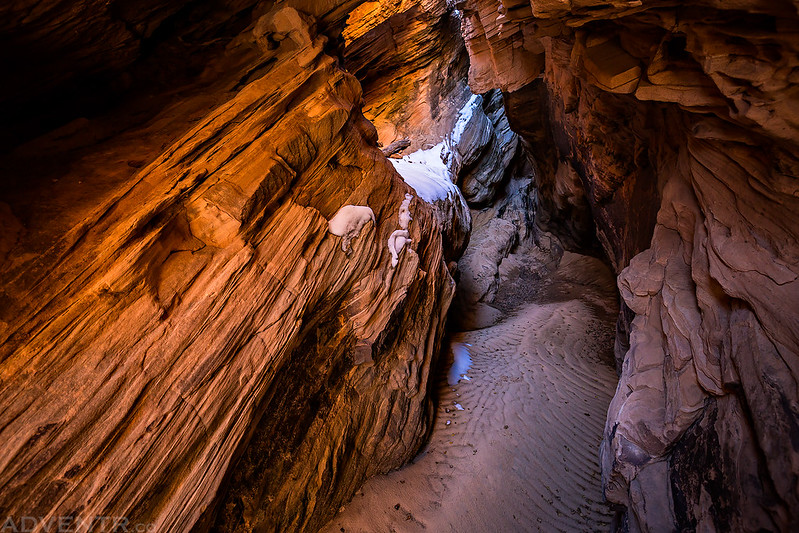 After finding another way back into Cave Canyon I was able to visit this large cave. 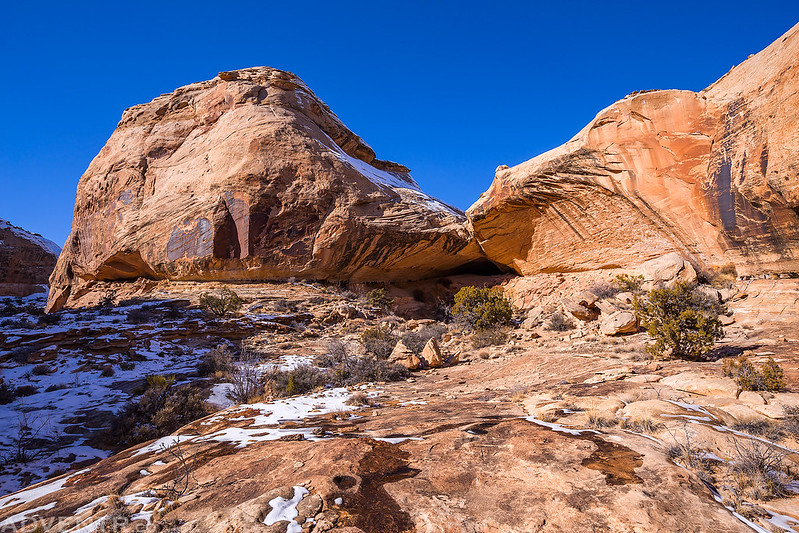 A view inside the cave. 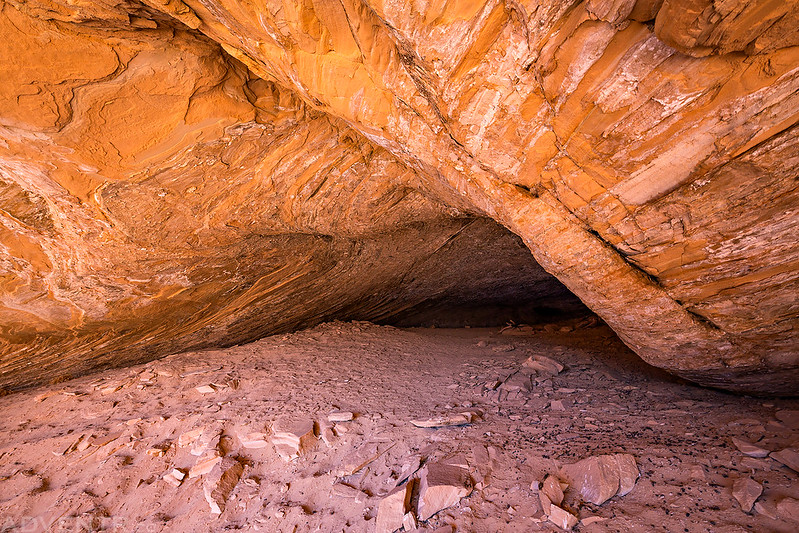 Nice lines and light on the ceiling of the cave. 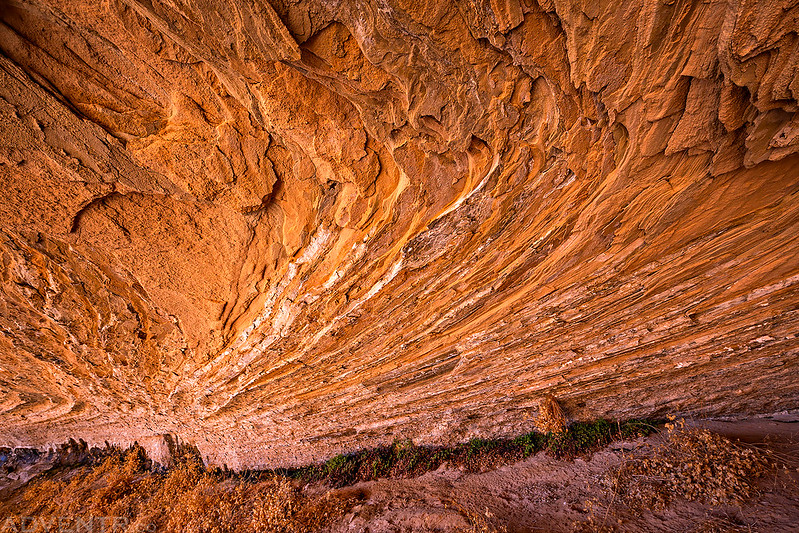 There was plenty more snow on the ground as I tried to continue up the canyon again. 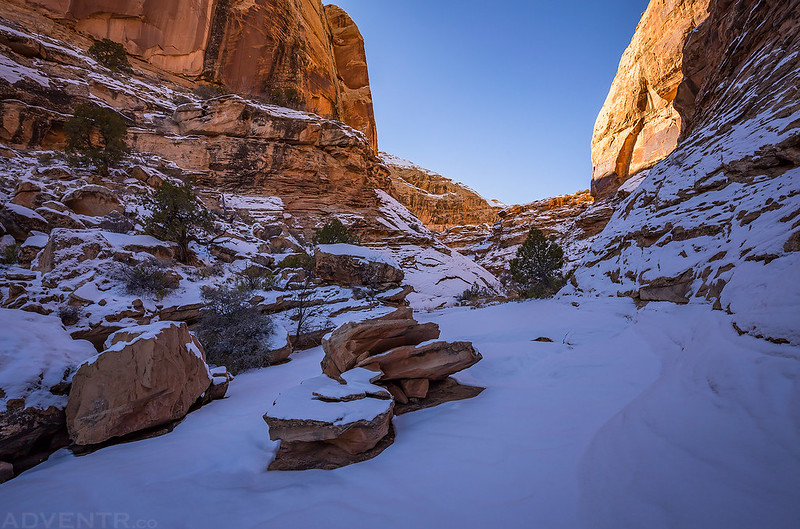 Then I reached this large dryfall and was unable to climb up it. 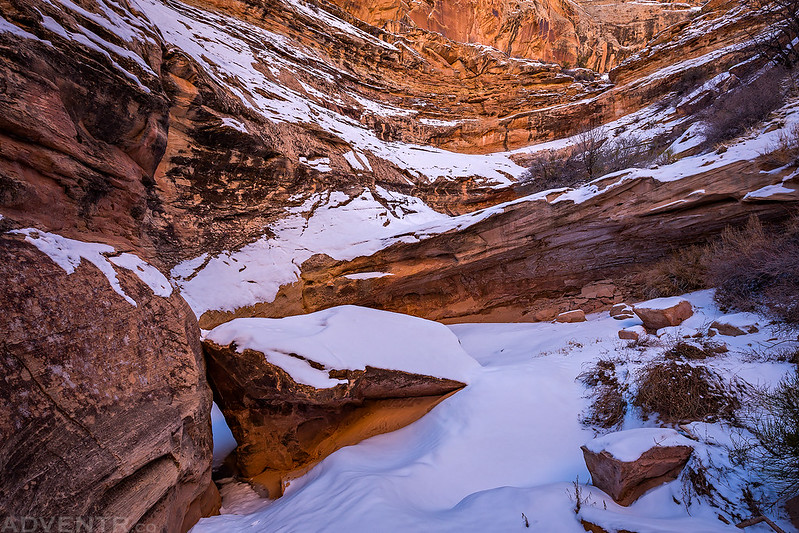 After retreating back to the canyon to the north I hiked past Arch Tower on my way to the edge of the reef. 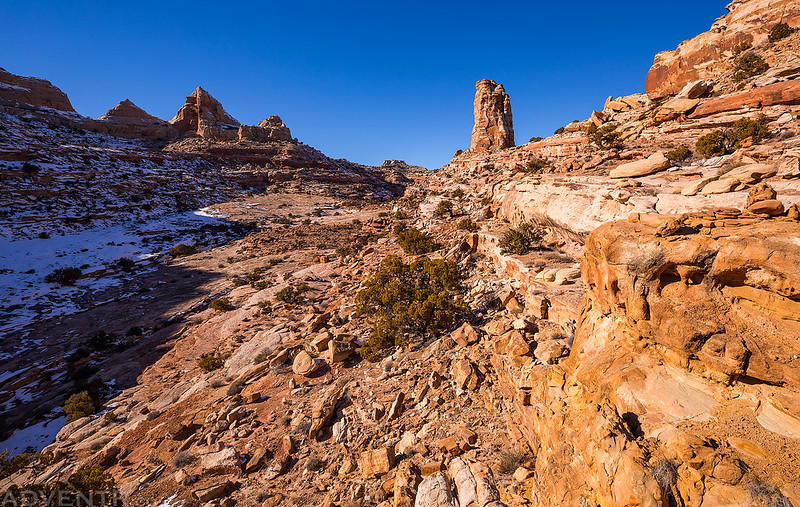 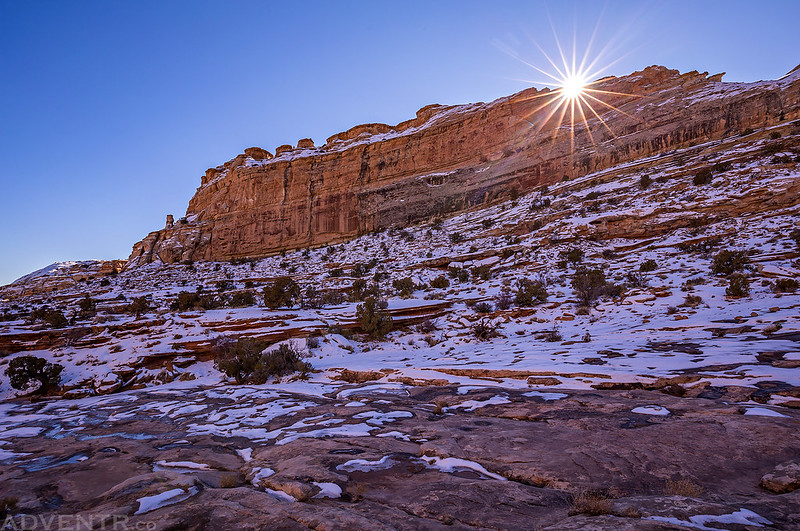 Look closely and you can see the arch in Arch Tower. 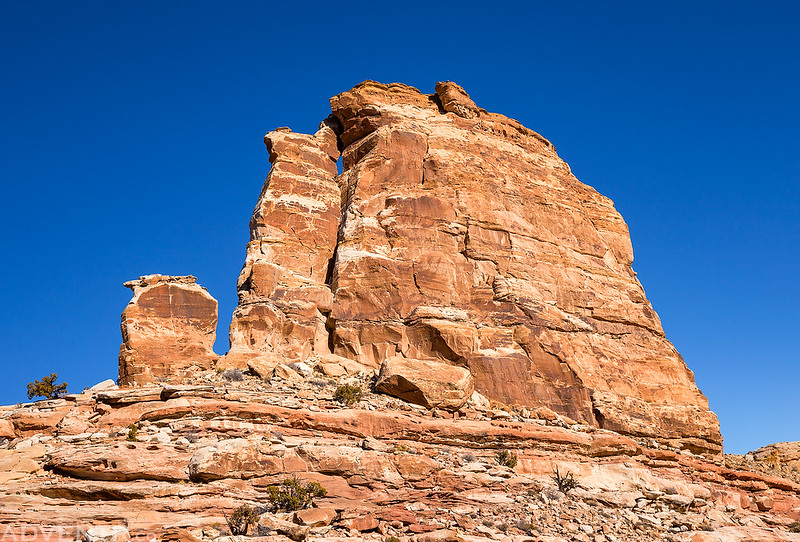 Hiking through another shallow canyon past Arch Tower. 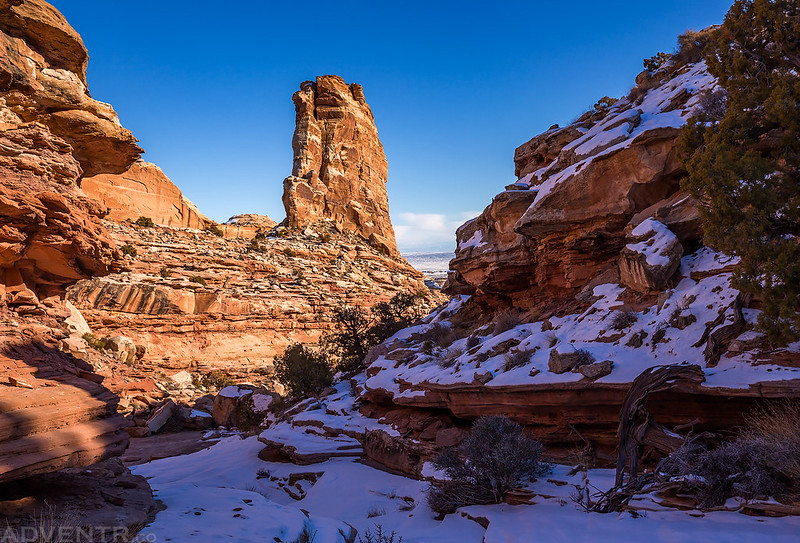 Finally, I reached the top of the reef and had a great view over the San Rafael River to the Jackass Benches past Mexican Mountain. 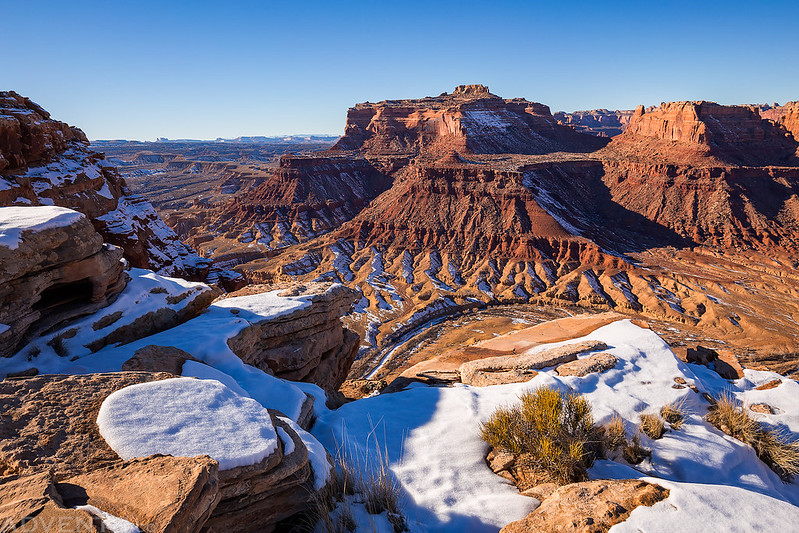 Here’s a view looking the other direction toward Mexican Bend and Spring Canyon which we hiked a couple years ago. 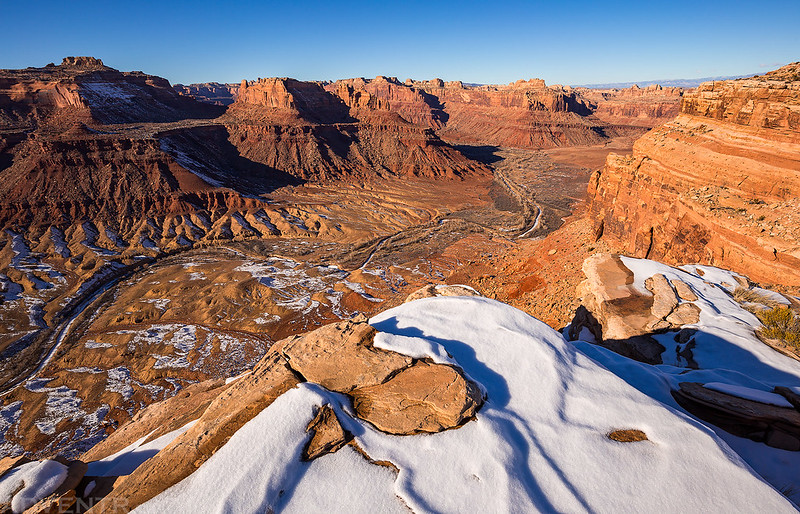 Even though I managed to find a way to the top of the San Rafael Reef, I really wanted to visit Ednah Natural Bridge which I had bypassed in the canyon I couldn’t climb up, so I decided to try hiking down the drainage to the south to see if I could reach it. I’m glad I did, because it was a very nice natural bridge and I ended up taking a couple of photos of it from different angles. 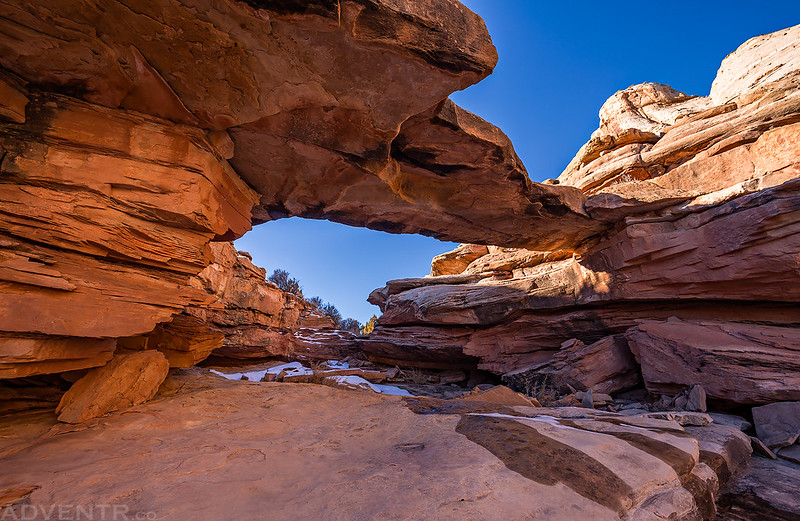 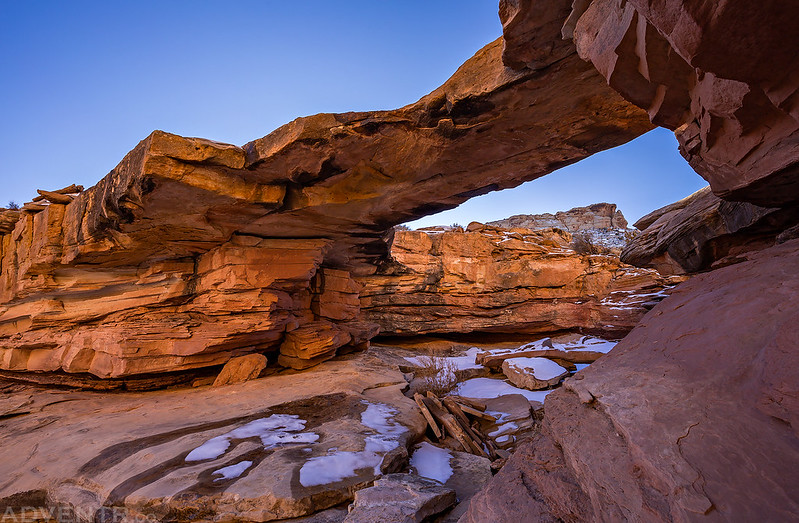 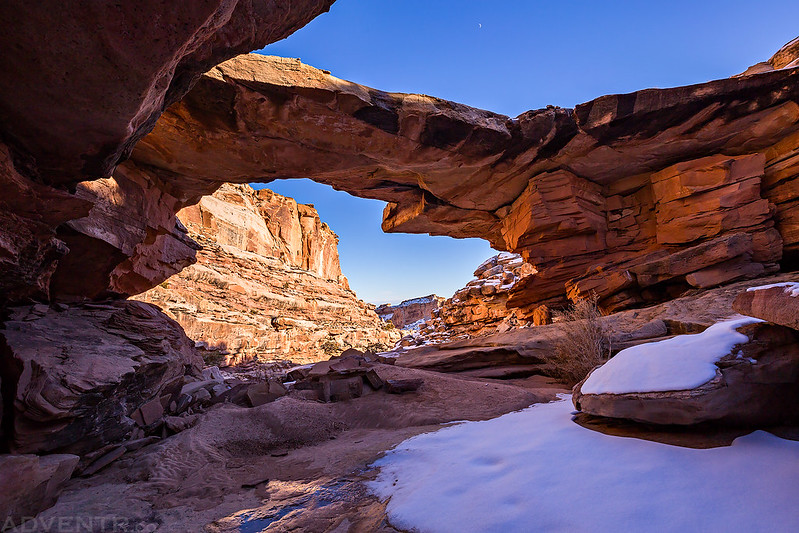 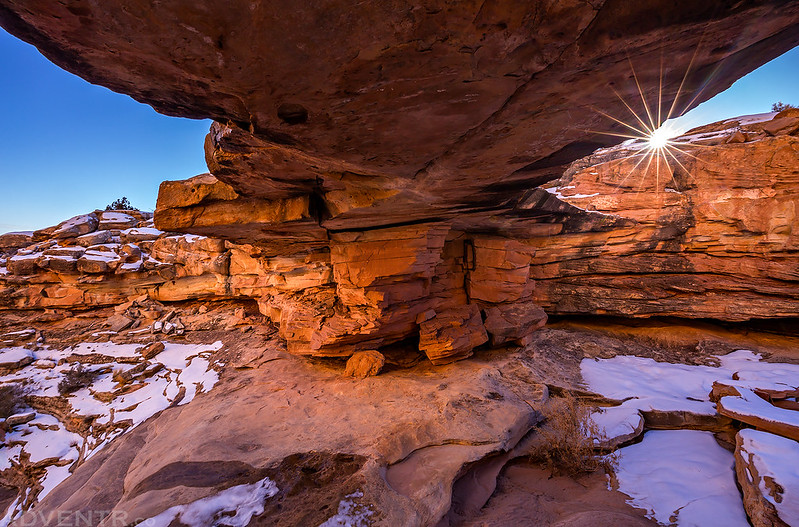 By now it was starting to get late and I needed to get moving if I wanted to reach my Jeep before sunset. I hiked part way back up to the overlook and then crossed back over to the canyon I had climbed up. I had considered trying to hike down Arch Tower Canyon but decided against it since I wasn’t sure if there were dryfalls I would need to downclimb, and if I couldn’t with snow on the ground I would have to climb back up yet another time and return the way I had come anyways. It was getting late and my legs were getting tired so I didn’t want to take that chance.

Hiking back up the reef through a little sandstone drainage. 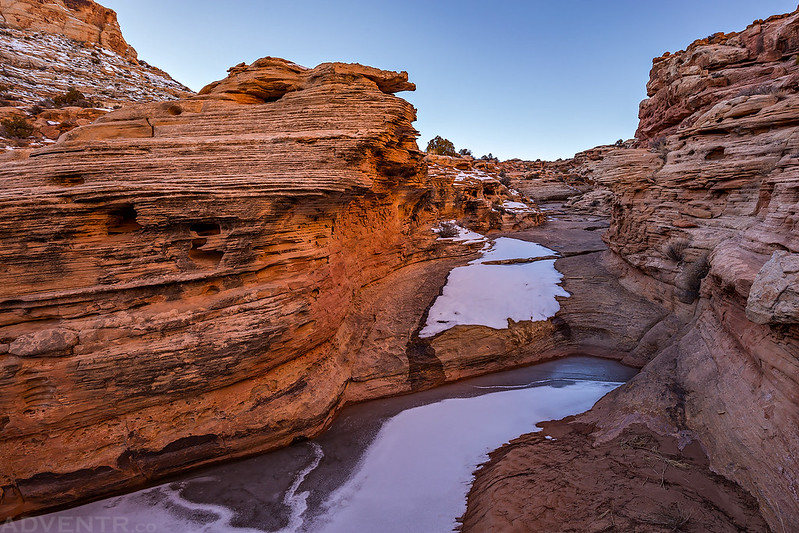 Then back down the reef again… 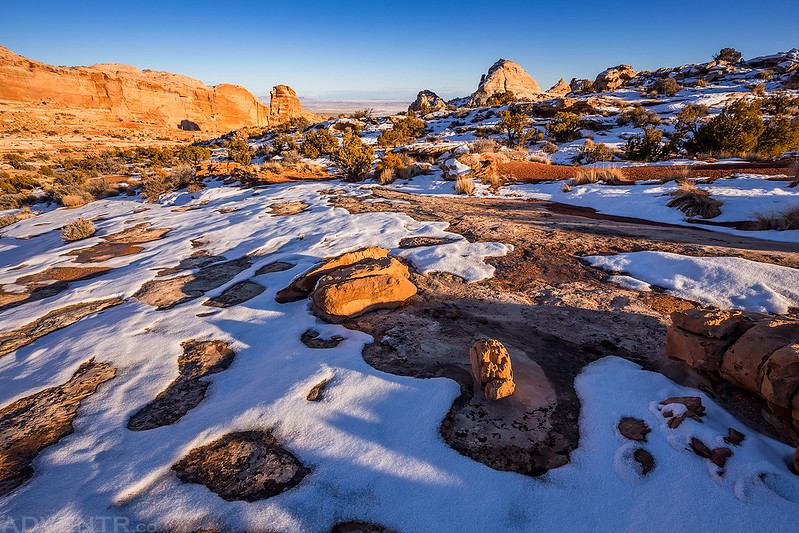 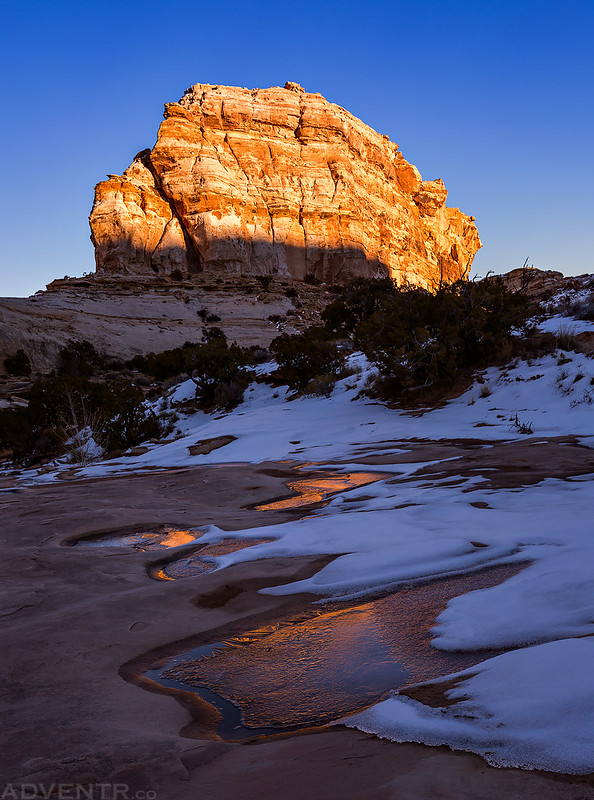 Last light on a dome above a canyon. 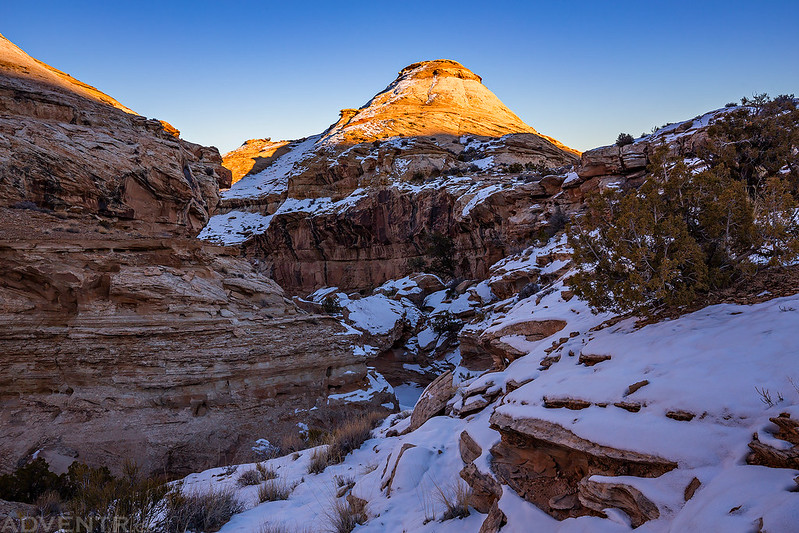 There was nice light on the landscape beyond Tidwell Draw as I hiked down the canyon. 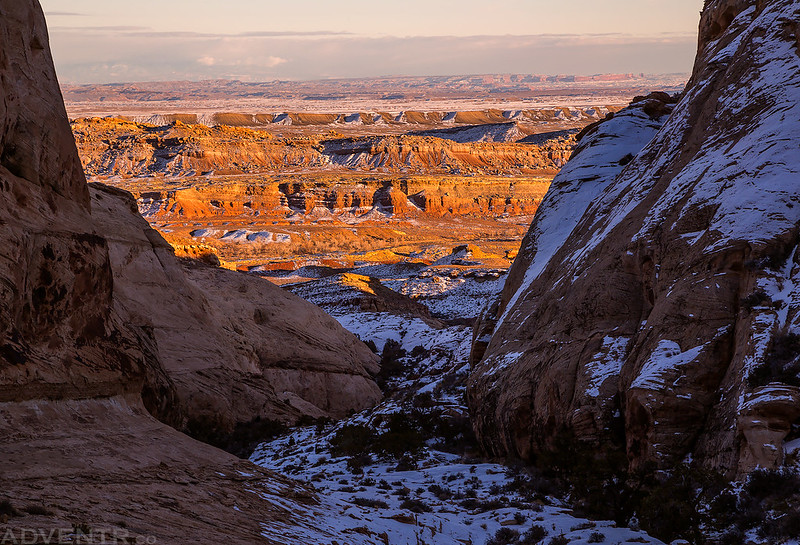 I made it back to my Jeep just at sunset and had hiked over 13 miles, which was a bit longer than the 8 miles I had planned. I stopped at Ray’s Tavern in Green River for a burger and then finished the drive back home. It had been a nice day in the wilderness by myself.