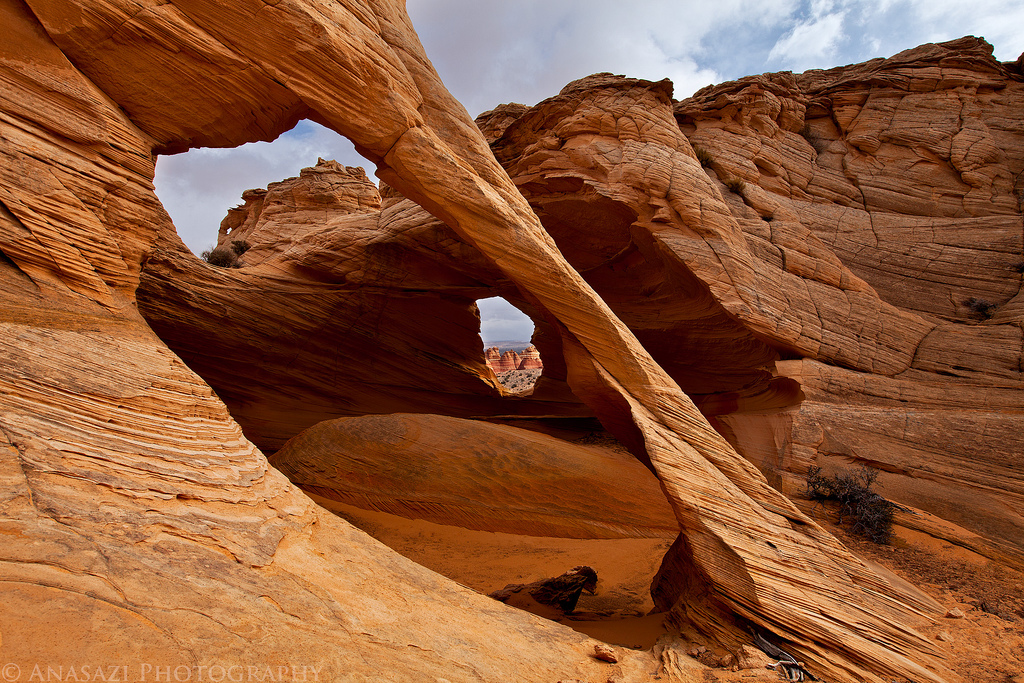 This trip report is dedicated in loving memory of my mom, Kathryn J. Langstraat.

I’ve long been a believer of enjoying life and living it to the fullest. That’s why I’m out exploring the Colorado Plateau and Rocky Mountains just about every chance I get (and creating all of these trip reports some of you enjoy reading). You never know just how much longer you actually have on this Earth, so I always try to make the most out of my free time! I was sadly reminded of that fact this very weekend.

Friday morning at work I received a call from my dad. My mom had arrived at work and suffered a heart attack. She was rushed to the hospital and was being kept alive on a ventilator. We were told that her brain was without oxygen for too long and that she was probably brain dead. They ran a few tests to check for brain activity throughout the weekend and early in the following week, but she never recovered. She was taken off of the ventilator on Tuesday afternoon and peacefully passed away on Wednesday, February 15, 2012 at 6:00am in the morning with my dad, sister and myself by her side.

On Saturday, as I was exploring Coyote Buttes South, my dad booked me a flight to Chicago from Flagstaff, since it was the closest airport to Page, for bright and early Monday morning. I was hoping for the best news from the test results, but feared the worst.

My mom’s sudden death was rough on me since I had not seen her in about three and a half years because I did not want to return to Illinois. She was supposed to come out here this year with my dad in their brand new RV, and I was looking forward to the visit. I really hope she knew how much I loved her, even though I never said it much.

After a good nights sleep at hotel in Page, Arizona we were back on the road to the Wire Pass trailhead. The weather forecast was calling for rain and possibly snow for much of the day, but that did not deter us. I’ve driven the House Rock Valley Road in my Jeep just after a storm when it was wet before, so I really wasn’t worried. It turned out that the road was still dry the whole way. We were the first ones to arrive at the trailhead for the day, but just as we were getting ready to start hiking a low four-door sedan pulled into the parking lot. I bet he was hoping that the road remianed dry all day…

When I was here last November with Amanda we mainly explored the area just around The Wave since it was our first time here. This trip I was looking forward to visiting more of the Coyote Buttes North area including photographing Melody Arch and exploring up on top of Top Rock.

Near the end of our initial hike to The Wave, Jackson climbs the sand hill as the sun peeks through an opening in the clouds. 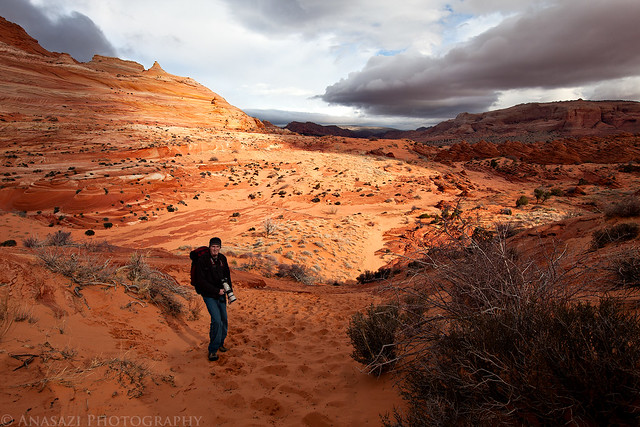 There were a lot of clouds in the sky throughout the day, but they were moving fast with plenty of openings for the sun to peek through, so the light was constantly changing. I seem to have trouble keeping my shadow out of the photos here, so I embraced it with this one. 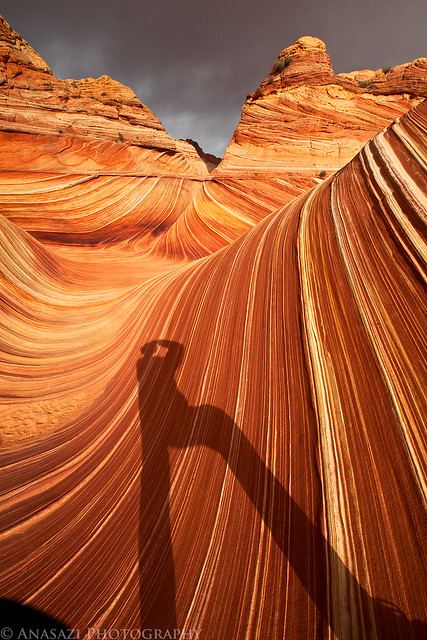 I took an obligatory photo from within ‘The Passage’ even though it may not be my favorite photo from this spot. 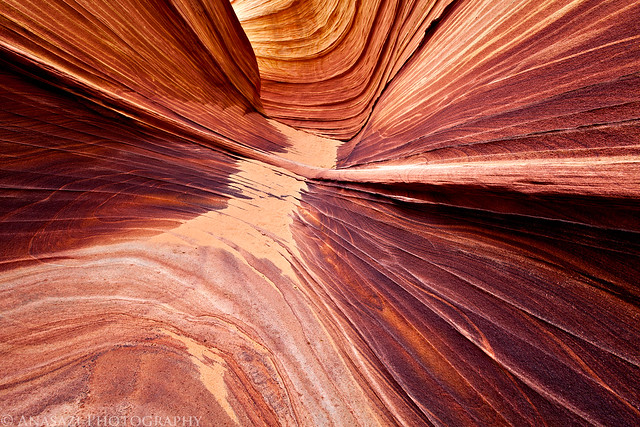 Jackson taking a photo of The Wave while the sun is shining on it. 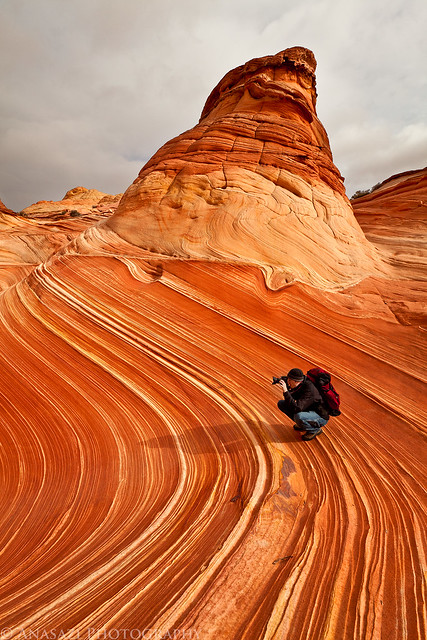 Of course I took a few new photos of The Wave while we were there, too. 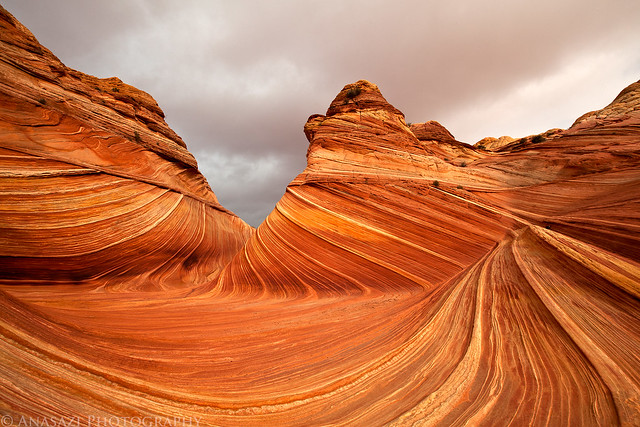 The sun highlights The Wave and surrounding sandstone through a hole in the clouds for a few minutes as we hiked above on our way to visit the Second Wave. 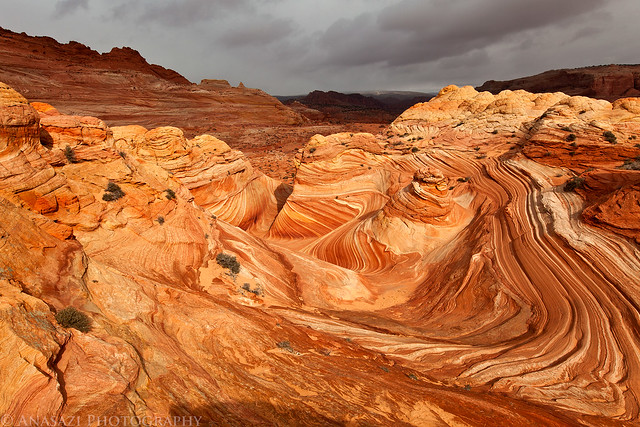 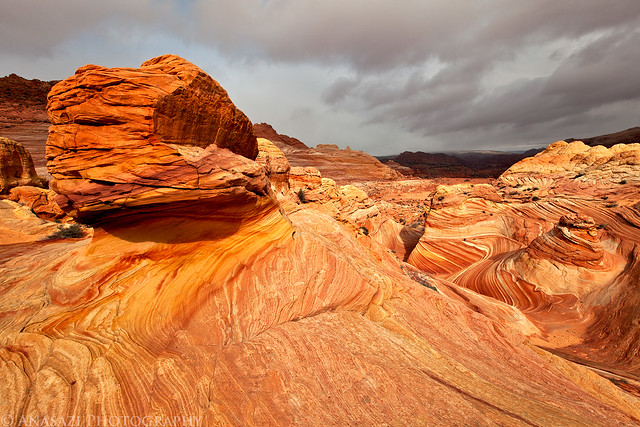 I liked the way the tops of these sandstone ridges caught the light. 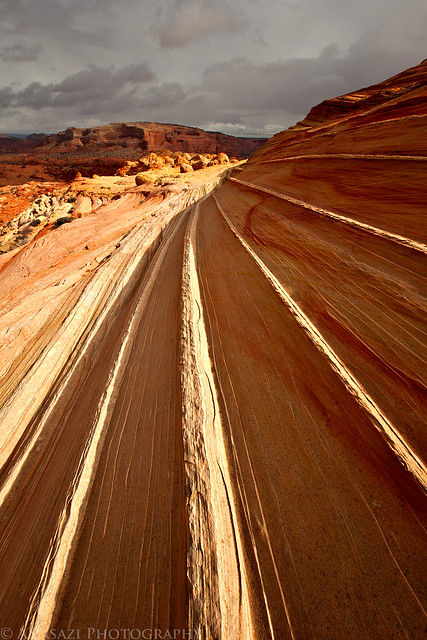 There were many sections of ‘brainrock’ in the area. 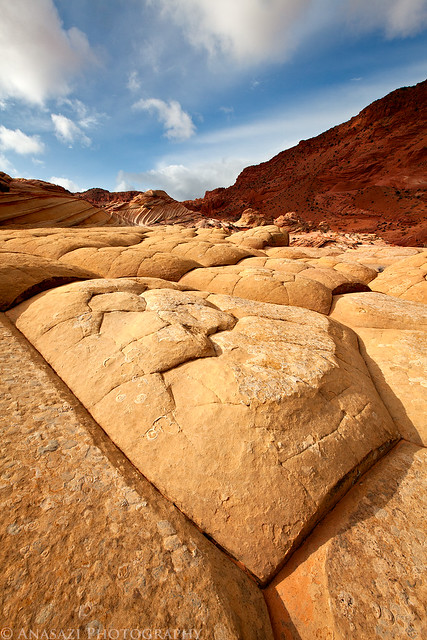 Finally, we reached the Second Wave and took a few photos before the sun hid behind the clouds again. 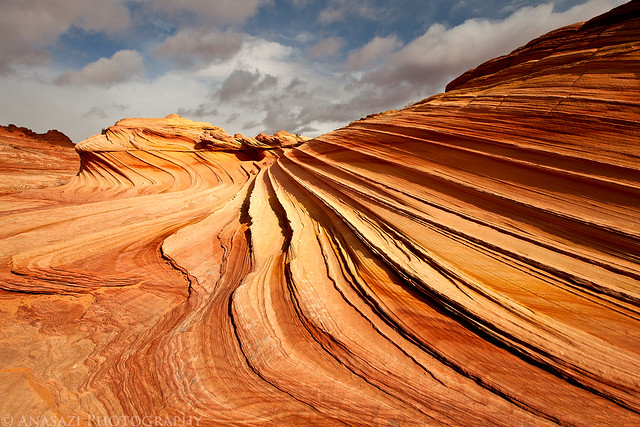 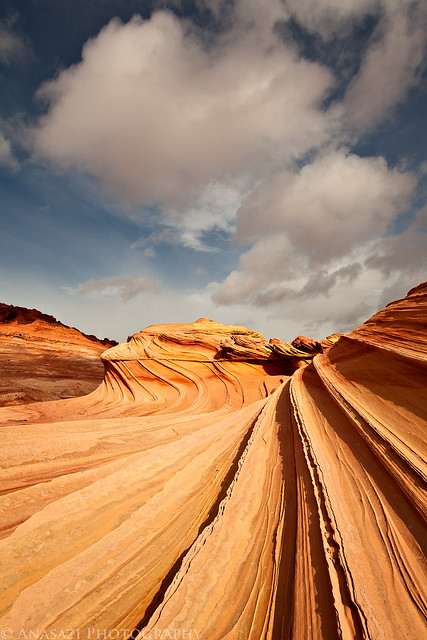 Jackson provides a sense of scale to the area. 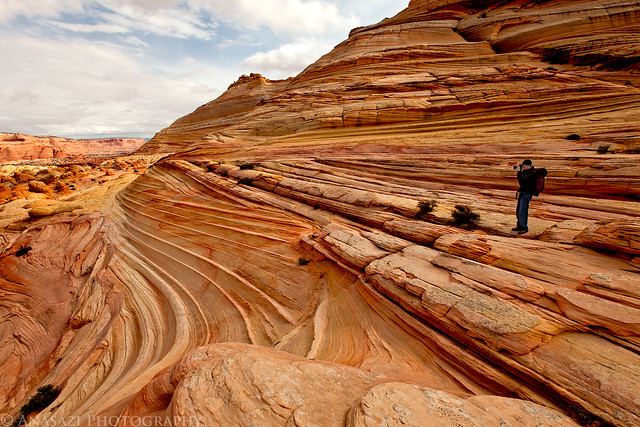 We even found a large pool of water and were able to get a few photos with reflections. I’m still waiting for the day I find a nice pool of water in The Wave…maybe when I return in May. 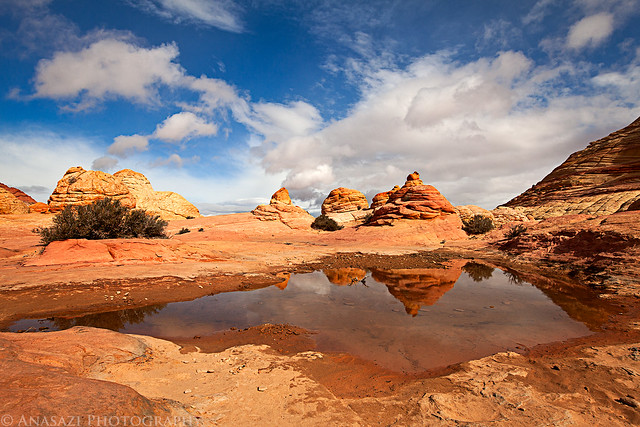 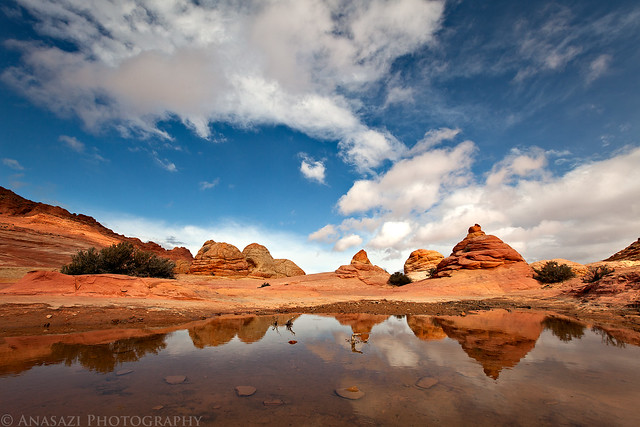 The shape and color of the sandstone found in this area of the Paria Plateau is just outstanding! 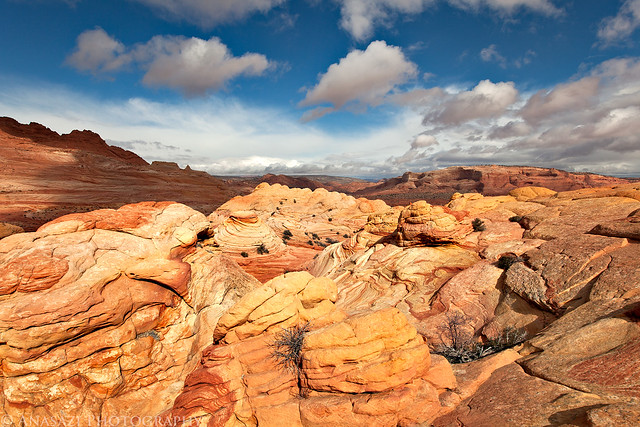 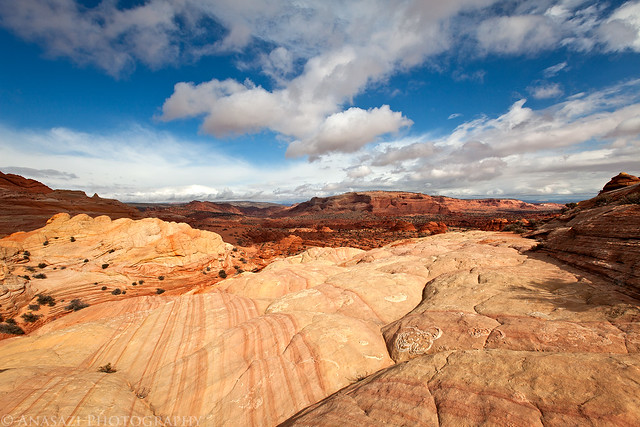 Next we hiked around and up onto Top Rock so we could find Melody Arch. Jackson hiking on a colorful ledge behind me. 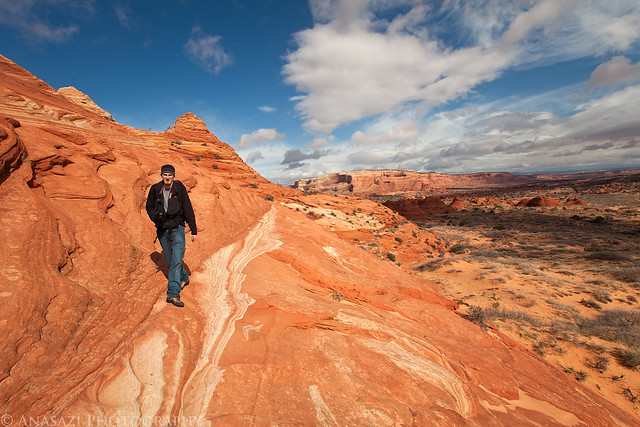 Great scenery along the way. 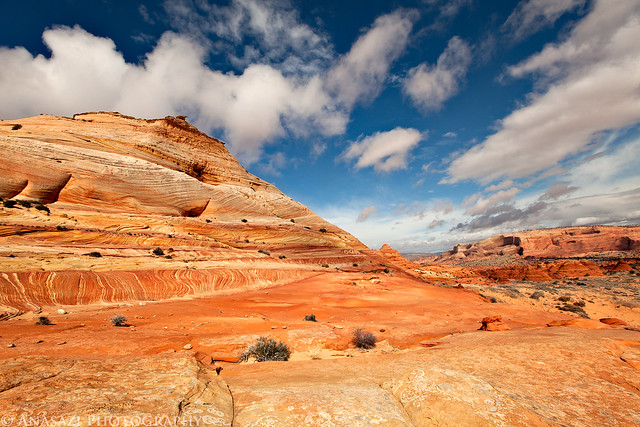 Nice Day for a Hike by IntrepidXJ, on Flickr

While trying to figure out a way to reach Melody Arch we found this very cool alcove that contained a large sand dune. At this point we were above it with no way down, buy we did get down to it after visiting Melody Arch. 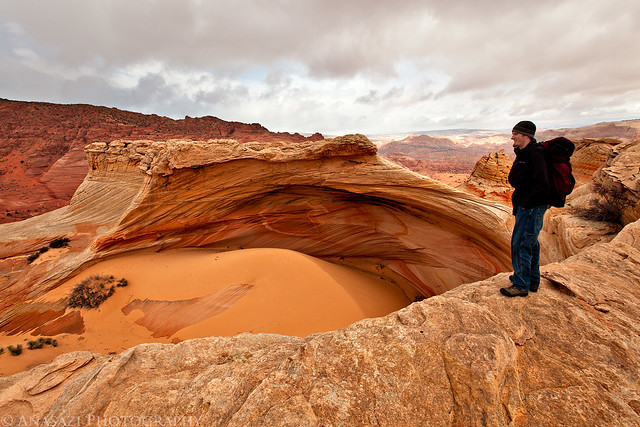 Above the Sand Dune Alcove by IntrepidXJ, on Flickr

We did eventually find our way to Melody Arch. If you look closely, you can spot three different arches in this photo. I believe the other two arches are known as Top Rock Window and Elephant Trunk Arch. 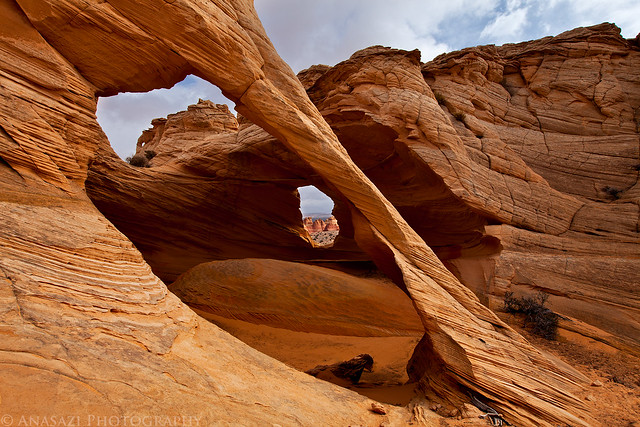 This is just another of the many unusual and colorful sandstone formations found in the area. It was raining or snowing off in the distance. 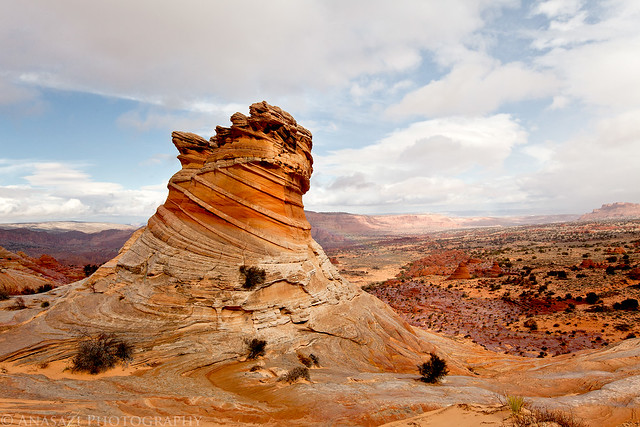 I couldn’t pass by this colorful stack of layered sandstone without taking a photo as we hiked back towards The Wave. 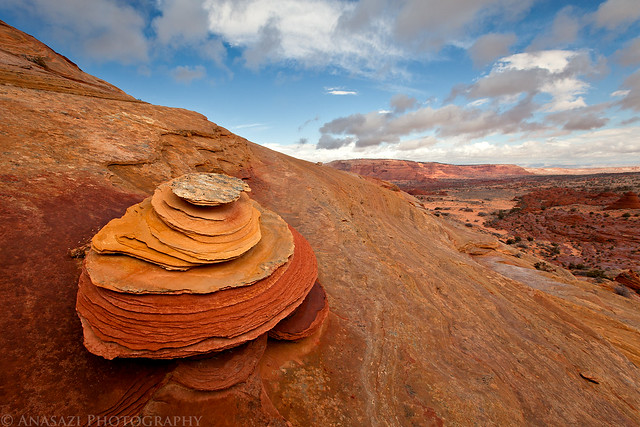 A nice view out from inside a few teepees. 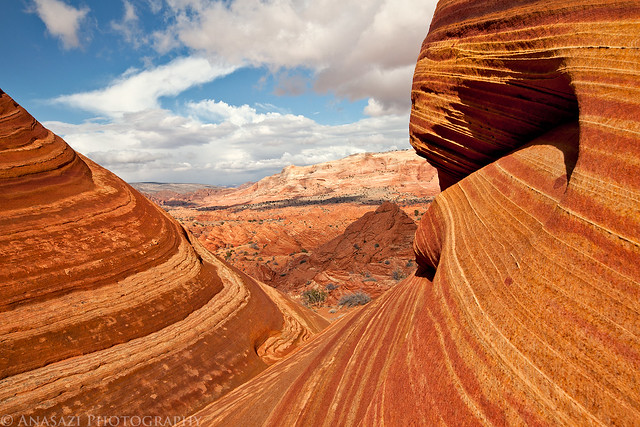 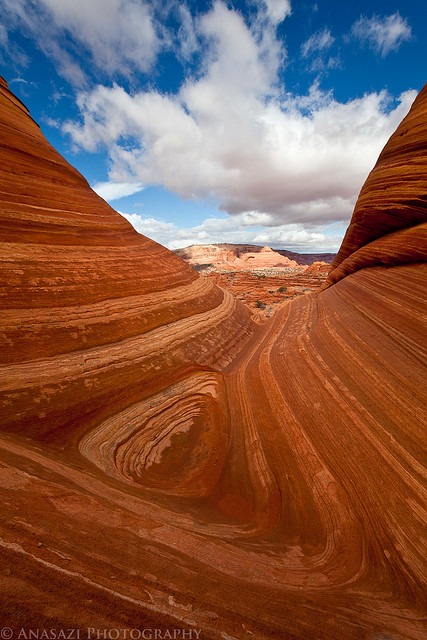 Here’s two more photos I took as we hiked back to the Jeep at the trailhead. 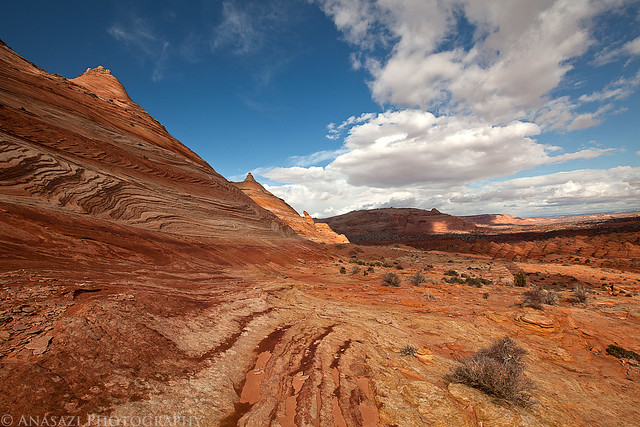 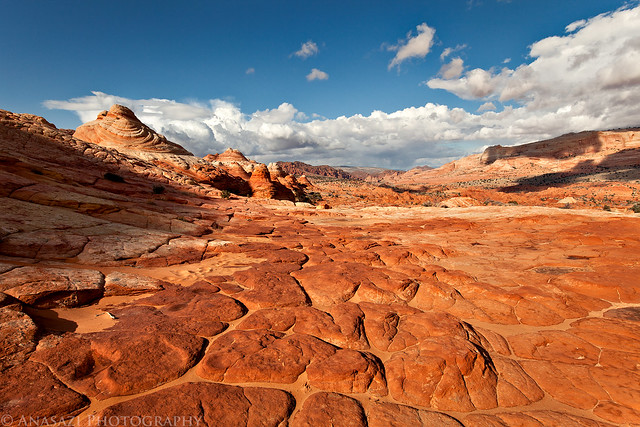 After reaching the trailhead again, we decided to drive back to Page via the southern route so that Jackson could try and get a photo of a California Condor along the way. We stopped at the condor release site and spotted at least a dozen condors high up on the Vermilion Cliffs, but they were too far away for a good photo even with my 100-400mm lens and after we hiked closer. We finished the drive around the Vermilion Cliffs, over the Navajo Bridge and through the Echo Cliffs to reach Page again. We grabbed some dinner and went to bed early so that we could drive to Flagstaff in the morning to catch my flight to Chicago. Jackson ended up driving my Jeep back home to Grand Junction and was able to get some better photos of a few California Condors at the Navajo Bridges on his way back.

What was supposed to be a fun birthday weekend with a friend in the wilderness became very bittersweet knowing that there was little hope that my mom would recover.