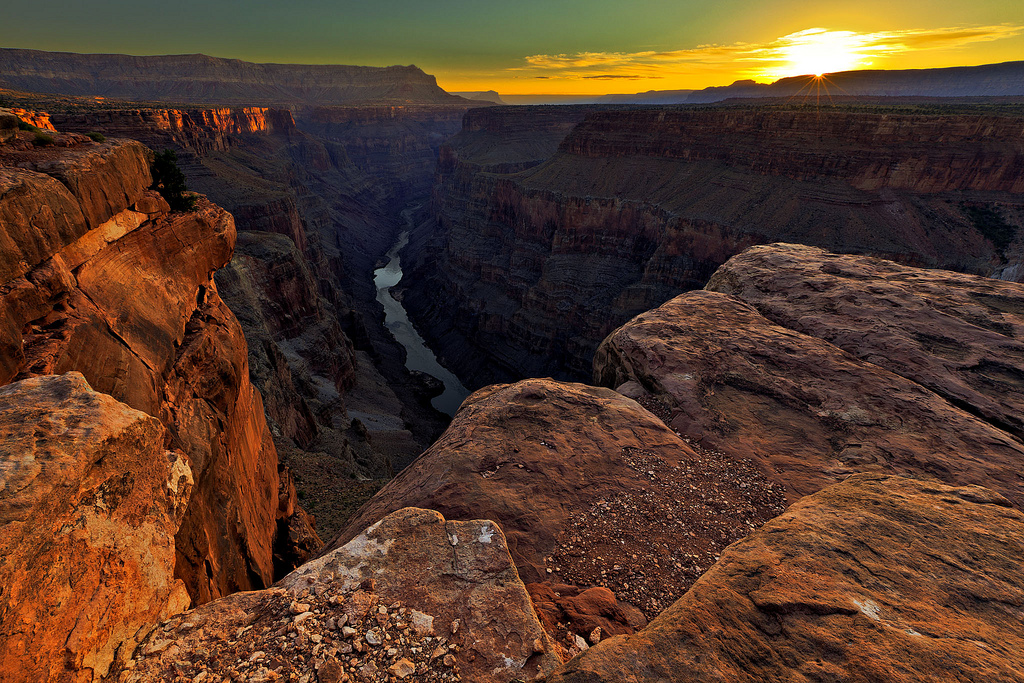 The sun just peeking over the horizon with a great view down into the Grand Canyon. 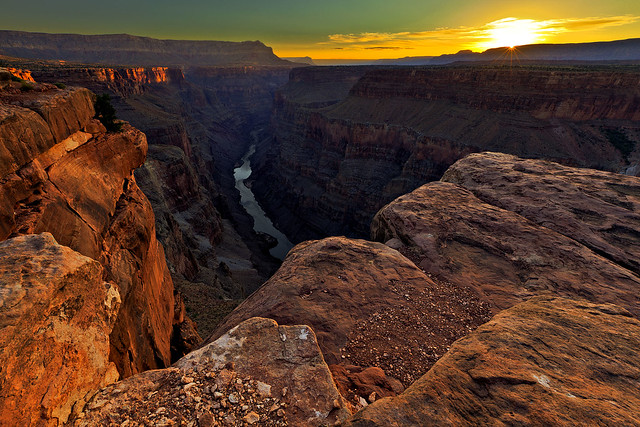 After taking some photos looking East, Jared and I headed over to get a view towards the West. 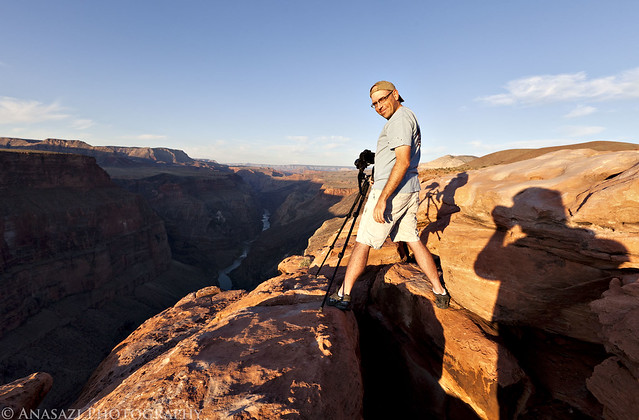 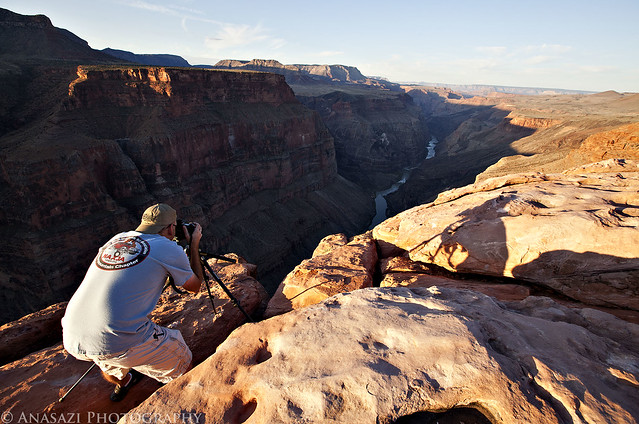 Once we were done photographing the sunrise, we packed up camp and left Toroweap behind. 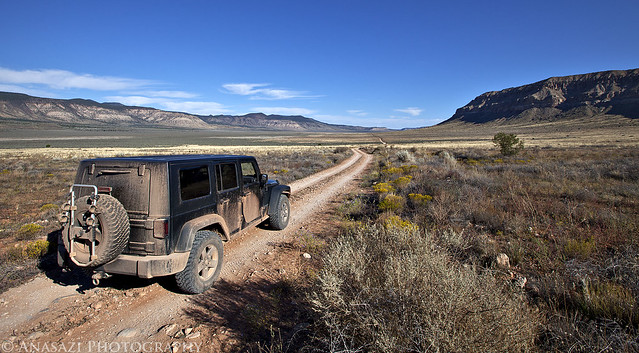 After navigating through some narrow and rougher backroads outside of the National Park (getting plenty more pin-striping on my Jeep from the vegetation on the tight trails), we eventually reached our destination for the rest of the day; a remote side canyon within Grand Canyon National Park. 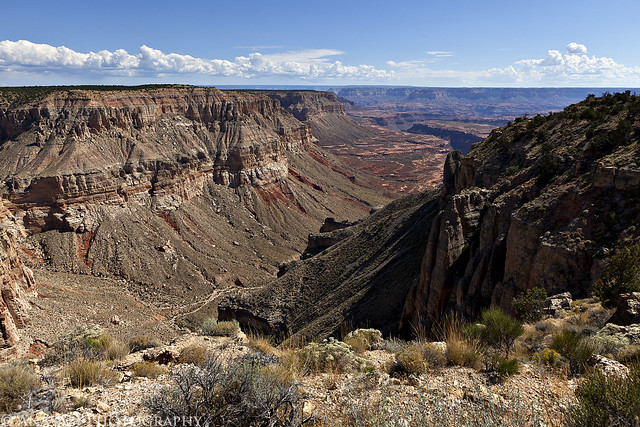 We had a little trouble finding the route down at first. Once we did find the start of the trail, it was still difficult to follow to the bottom of the canyon. It was an old stock trail that was constructed in places, but that sees very little use today. In places there wasn’t much, if any, of a trail to follow, so we ended up doing a lot of route-finding. The way down was very steep and loose, plus we had to avoid a rattlesnake that wouldn’t move away from the trail.

Once we were down in the canyon, the storm clouds started to roll in. 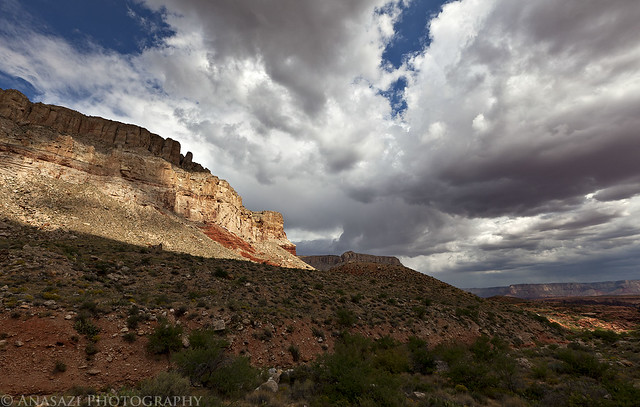 We were hoping to find some sort of faint trail down in the canyon, but that didn’t seem to be the case. Most of our hike was navigating through the backcountry. 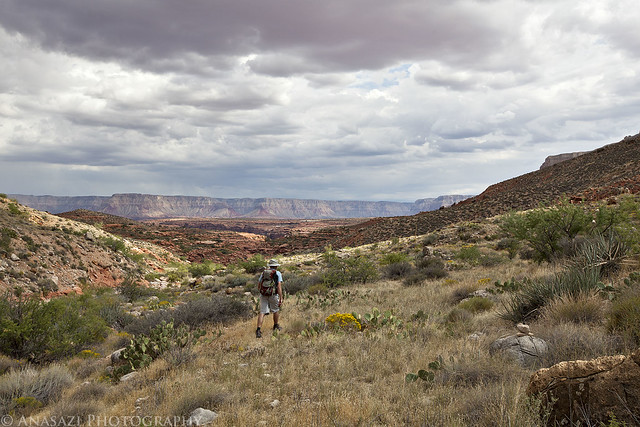 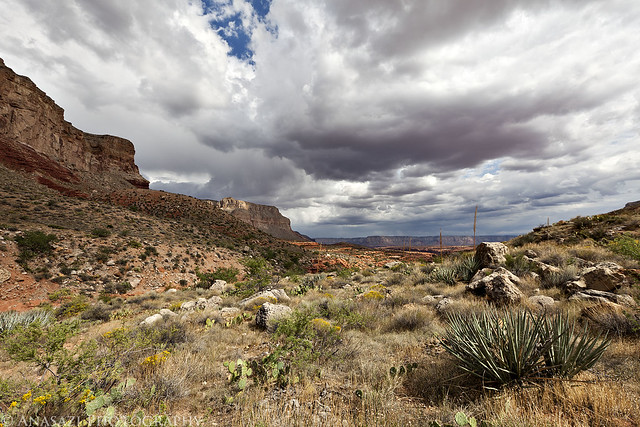 As we were finding our way down the canyon, we had to continuously be aware of and try to avoid all of the Prickly Pear growing here. It was a futile effort, though…and I was still picking out cactus needles from my legs the next day. 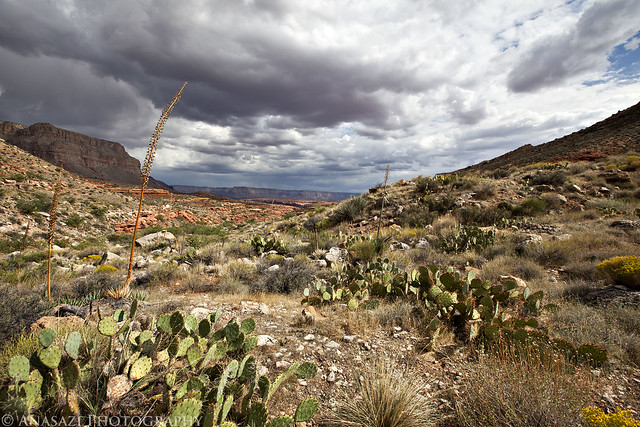 A view back up the canyon from where we had come. 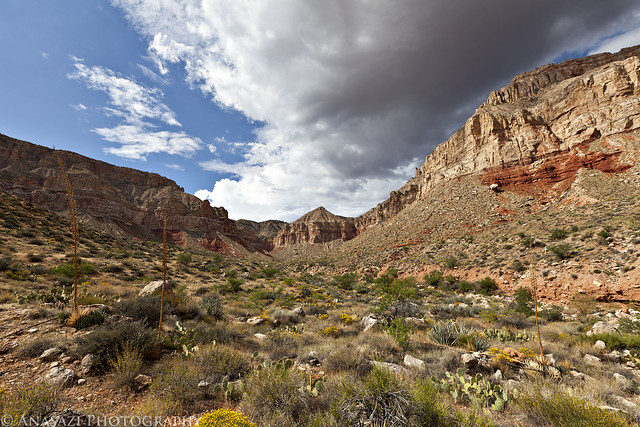 More route-finding in the canyon. 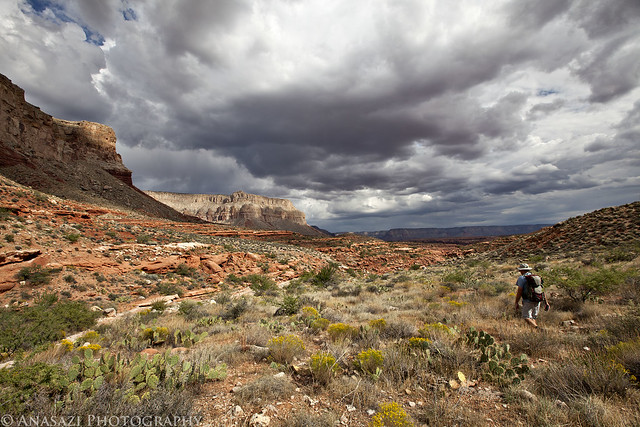 Some nice scenery, and luckily the clouds had not dropped any rain on us yet. 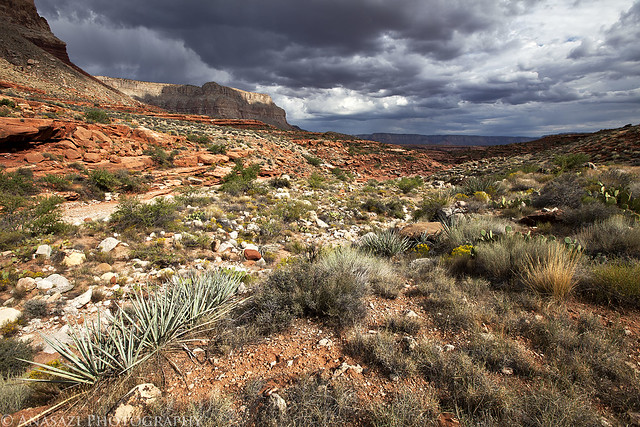 Eventually we started to follow the wash which made the hiking a little easier. 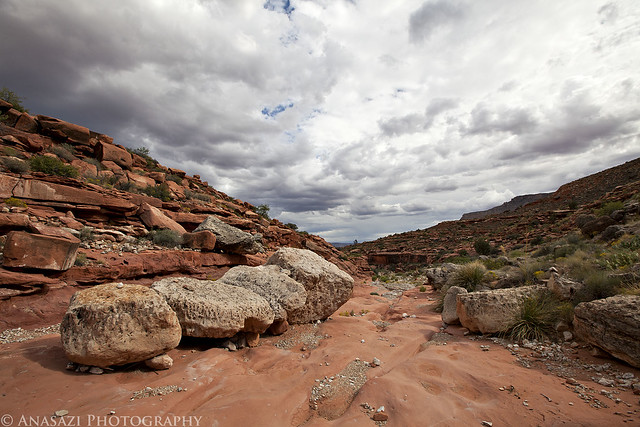 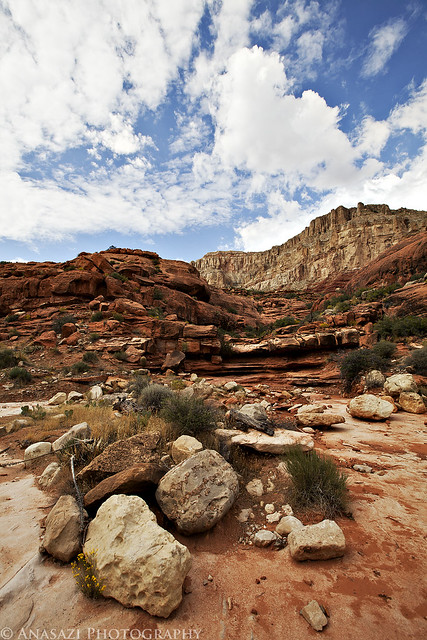 We kept following the wash until it became another canyon. 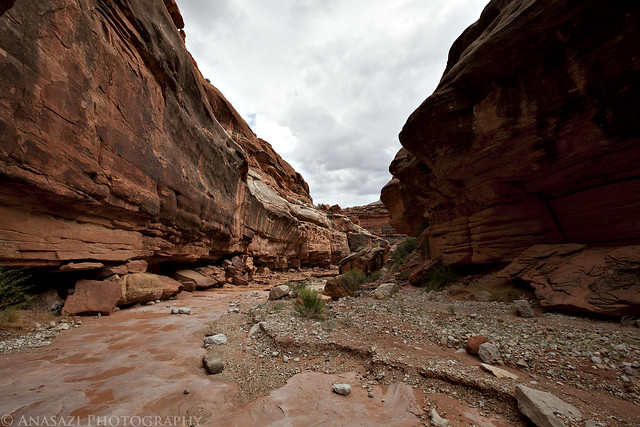 Soon after entering the smaller canyon we came across our first rock art of the day. It wasn’t much, but there were quite a few dots organized into a few large square grid-like designs. It looked like these dots may have been fingerprints, based on their shape, so I’m referring to this site as the Fingerprint Shelter. 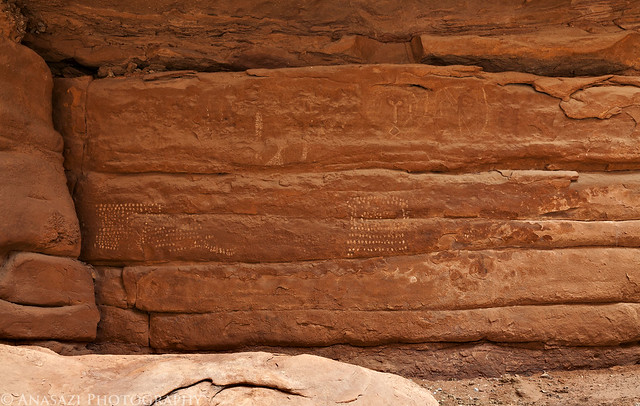 Here’s a closer look at the grid made up of fingerprints. 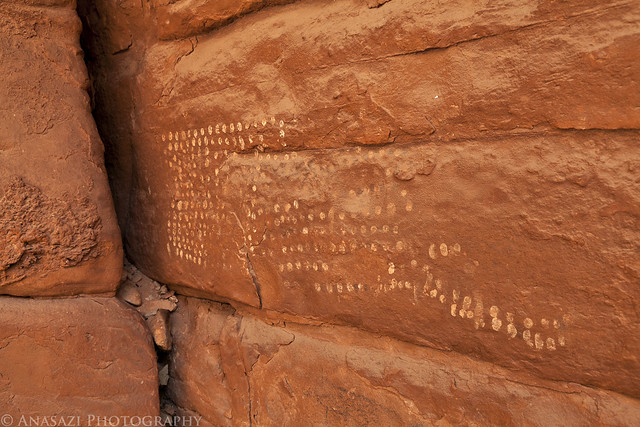 Across the canyon from the Fingerprint Shelter we came across another large and low overhang that contained a lot of faint pictographs and a few petroglyphs. One of the more interesting pictographs at the site are these faded red lines. They remind me of the red line designs I saw at Weavers Caves over the summer. 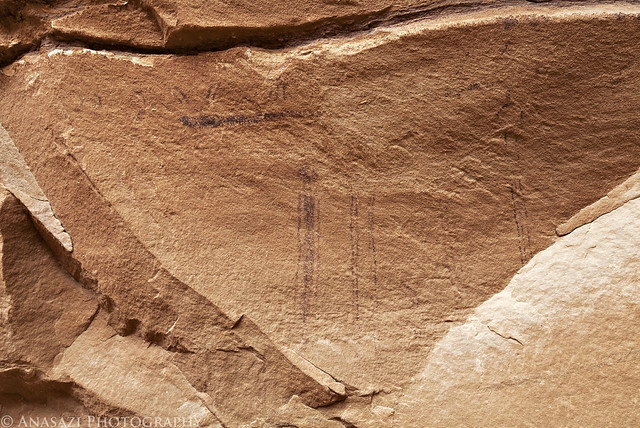 A few more of the bigger white figures at this site. The largest white anthropomorph in outline is interesting. 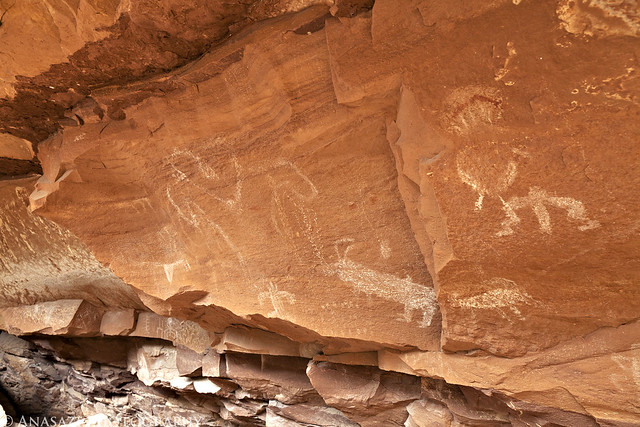 We also found plenty of potsherds in this shelter. 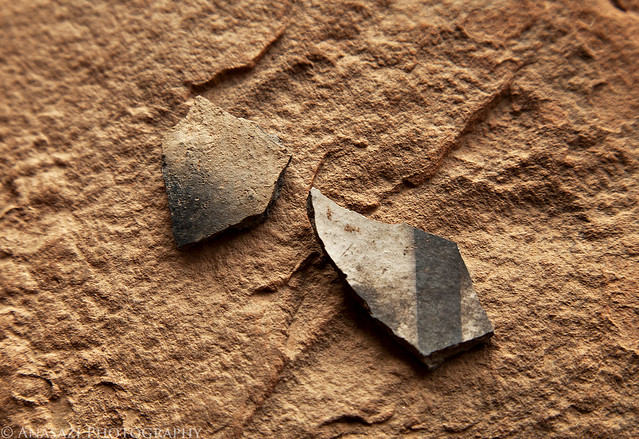 A good sized anthropomorphic figure found at the site. 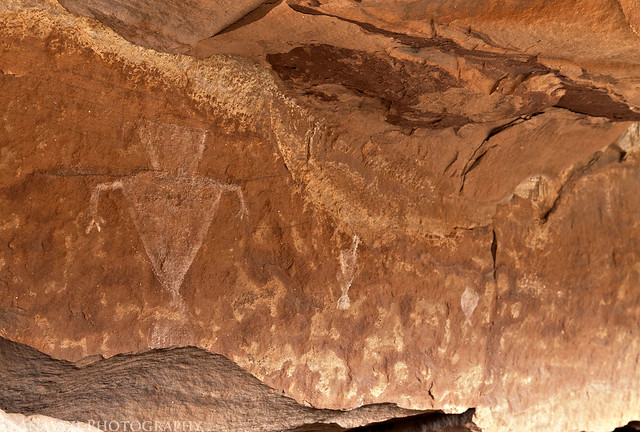 After continuing on past this site we soon started hiking up an old constructed stock trail (where we could still find it) that lead up a smaller side canyon. A short way up that canyon we found some more pictographs high up on a ledge above, so we climbed up to them. 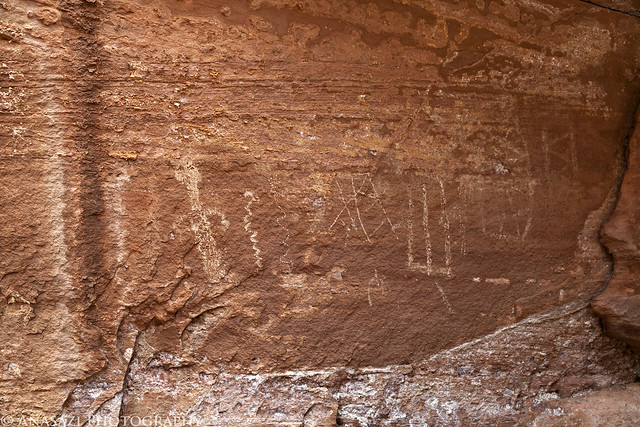 I really like the snake-like figure made up of small white dots. Very interesting! 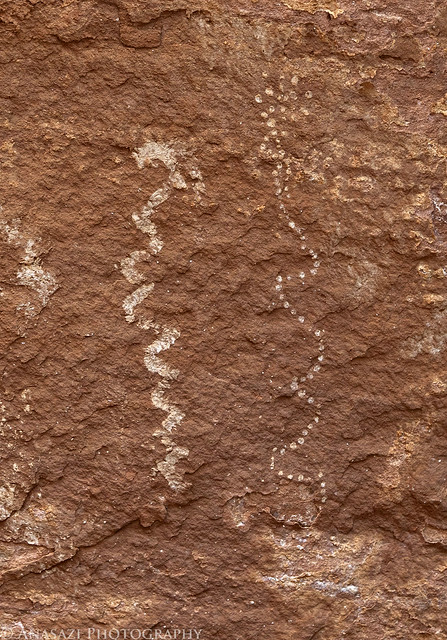 Then I spotted the panel I was looking for. The Cowboy Shelter Pictographs. I had no idea what they looked like and just a general idea of where they might be based on some research I had done for the trip. Looks like I guessed right! This is the first Grand Canyon Polychrome / Esplanade Style rock art that I have seen in person. Definitely a good find, even if it is kind of faded… If you look closely at the larger white figures in this panel, you can see that there is some fine detail done in red paint. There are also red snake-like lines that connect all of the figures together. You might need to click on the image to view a larger size on Flicker to see some of these details. 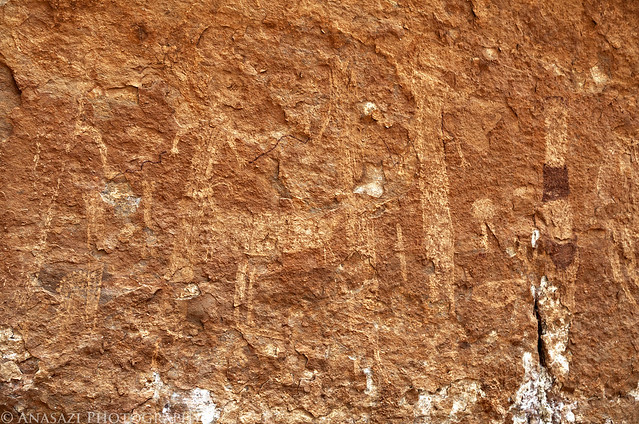 Here’s a closer look at the red and white figure on the right side of the panel. 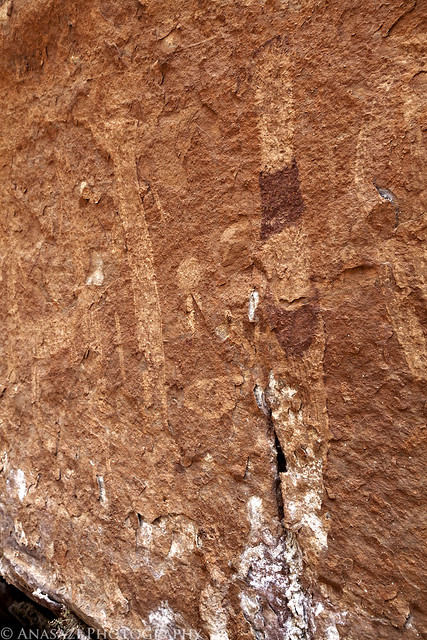 A little further up the canyon we came across a cowboy camp at the end of the old stock trail. 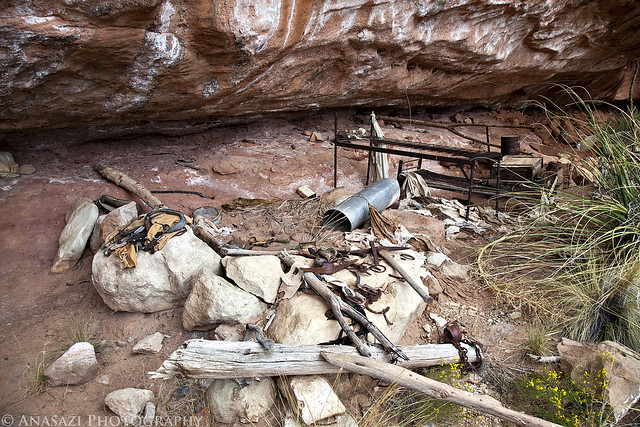 While this is known as a cowboy camp, it sure looks like there is a lot of mining equipment here, too. Maybe the cowboys prospected in their spare time? Or perhaps some miners moved in and used the camp after the cowboys had abandoned it? 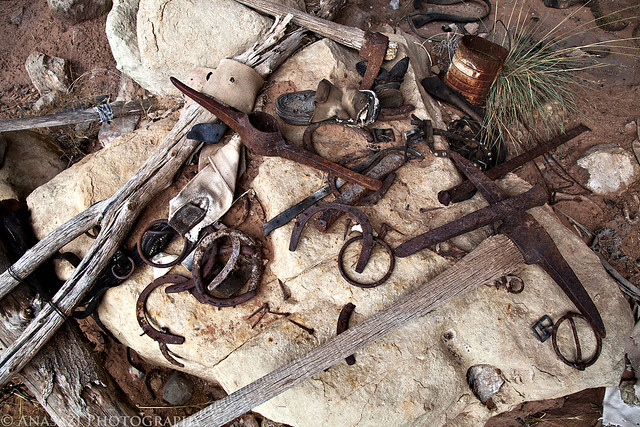 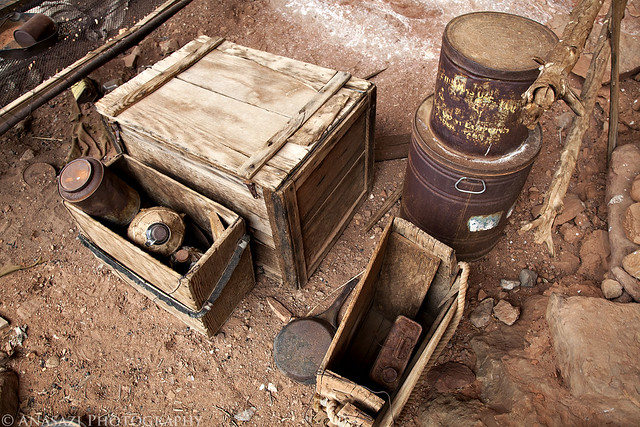 I took a peek inside the storage box. 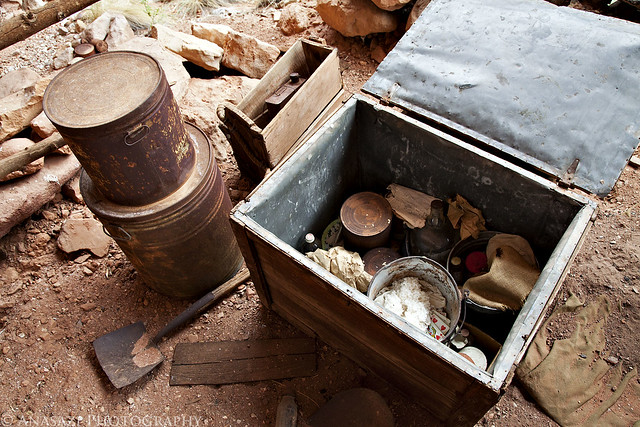 The real adventure began once we left the cowboy camp and started hiking back to the Jeep. We decided to continue up the small side canyon we were in and get up on the Esplanade level to hike back. This added some more distance to a hike that was already was much longer than we had anticipated. We also knew it was going to start getting dark soon and we needed to keep moving. While we were hiking back with no trail to follow and plenty of deeper washes to go around or through, the storm clouds that had been teasing us all day finally decided to let loose and pour down on us. We got soaked!

By the time we reached the bottom of the trail that would take us back out of the canyon, it was getting pretty dark out. I then realized that my headlamp was still in my Jeep and not in my backpack. Though the Jeep was technically only about a quarter mile from us at this point, it was over 1,000 feet above us still. Luckily, Jared had two small flashlights with him that we were able to use. It was tough enough finding our way down the old stock trail in the daylight, so getting back out in the dark was going to be a real challenge. It took us a while to get back out of the canyon, and it was a tough climb after all of the other hiking and climbing we had done already…but we did eventually make it out. This hike ended up being just under 9 miles in length with over 4500 feet of elevation gain according to the GPS track I kept.

Once we were back to the Jeep on the rim of the canyon we had some snacks, drank some water and then drove out of Grand Canyon National Park in the dark. It was getting late, we were still wet and it was getting cooler out…..I decided that we would drive straight back to Kanab and get a room for the night instead of finding a place to setup camp for the night.